The Eruption from Tonga volcano was so strong, that it sent a measurable and visible shockwave across the entire world. A tsunami advisory was issued for the west coast of the United States, ahead of the incoming tsunami wave created by the large explosion. The eruption was so powerful that it reached high into the stratosphere.

Such large explosive events are not really common but can have global-reaching effects when they occur. This event really is on a global scale, having measurable effects across the entire world.

The image below shows the massive ash cloud from the eruption, breaking high into the stratosphere, along with tones of sulfur dioxide, which is known to have a global cooling effect when ejected in large amounts. 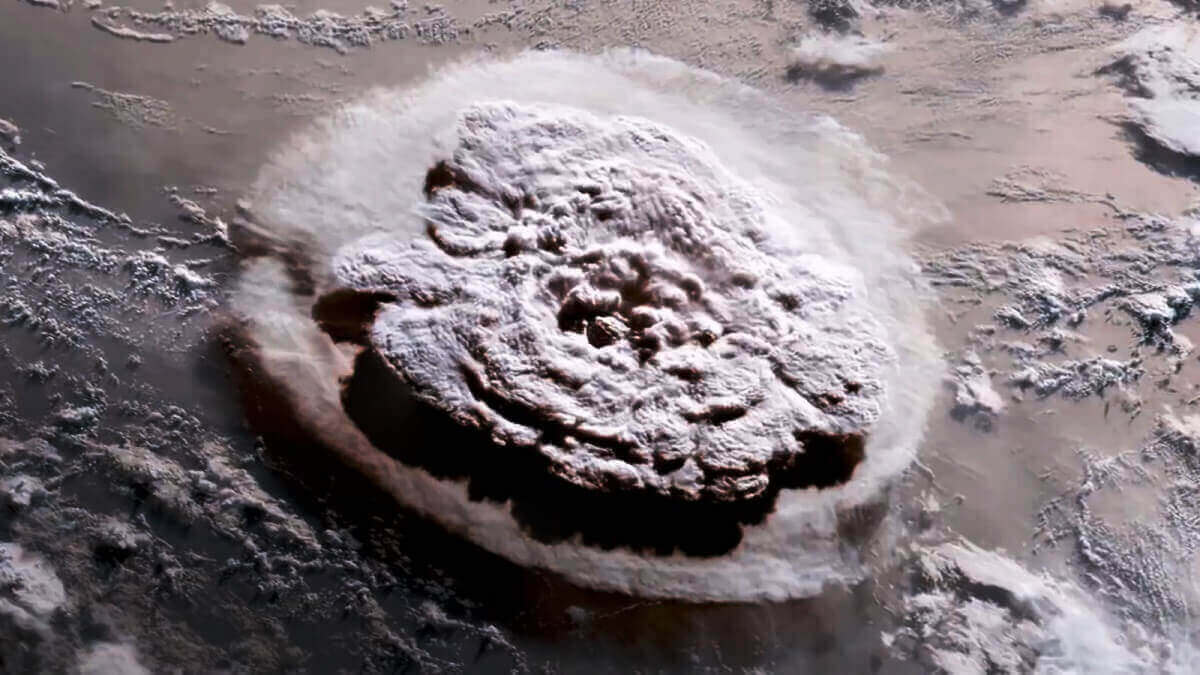 Hunga Tonga–Hunga Haʻapai is a volcanic island in the Tonga archipelago. It is located northeast of New Zealand and east-southeast of the Fiji island. On the image below you can see the location of the Hunga Tonga volcano on the globe. 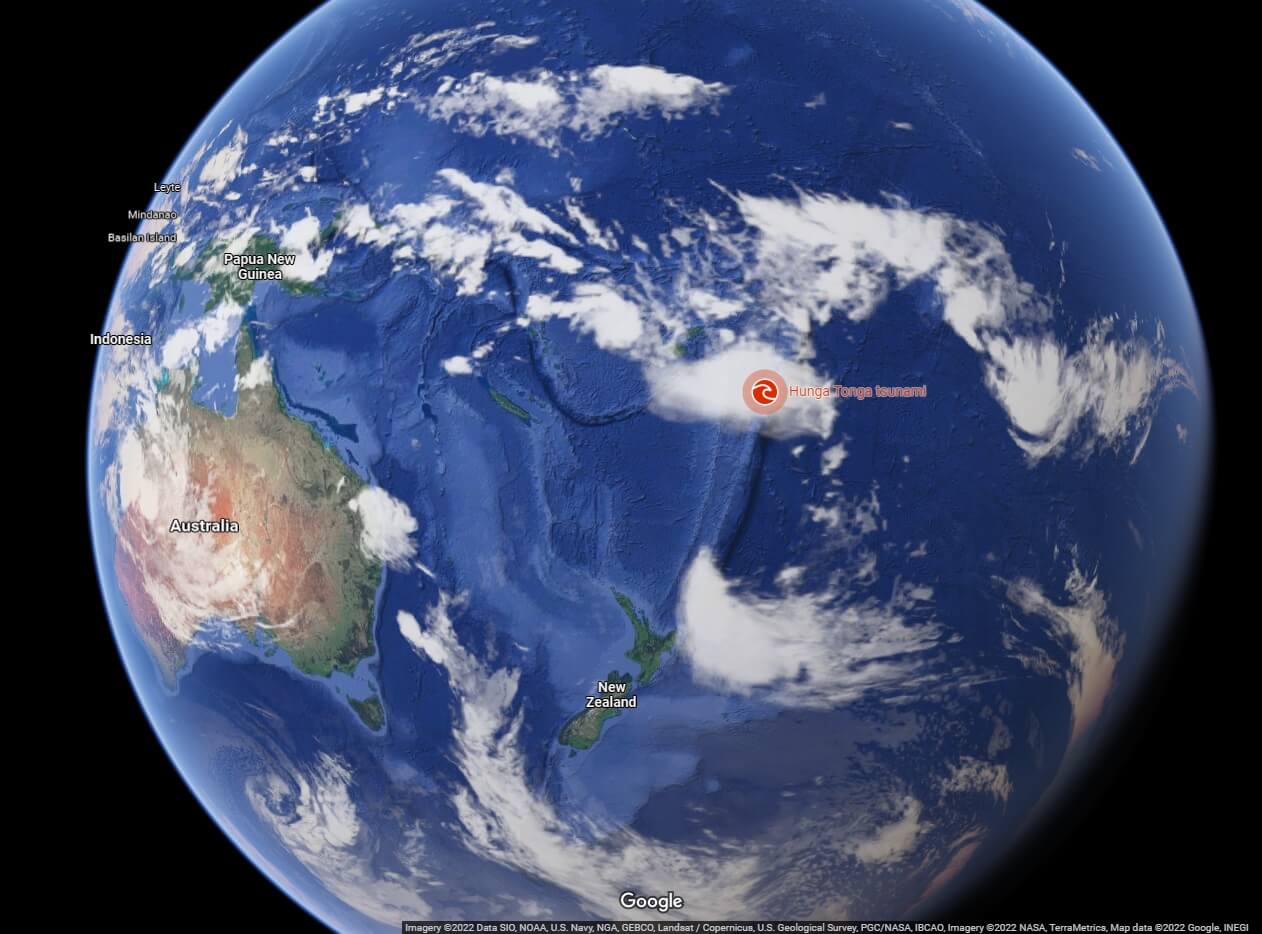 Hunga Tonga is a submarine volcano. That means that it is essentially fully underwater. But it has breached the sea level during an eruption in 2009. The image below shows the island and its underwater structure. We can nicely see that this island is actually part of a caldera, which is fully submerged underwater. 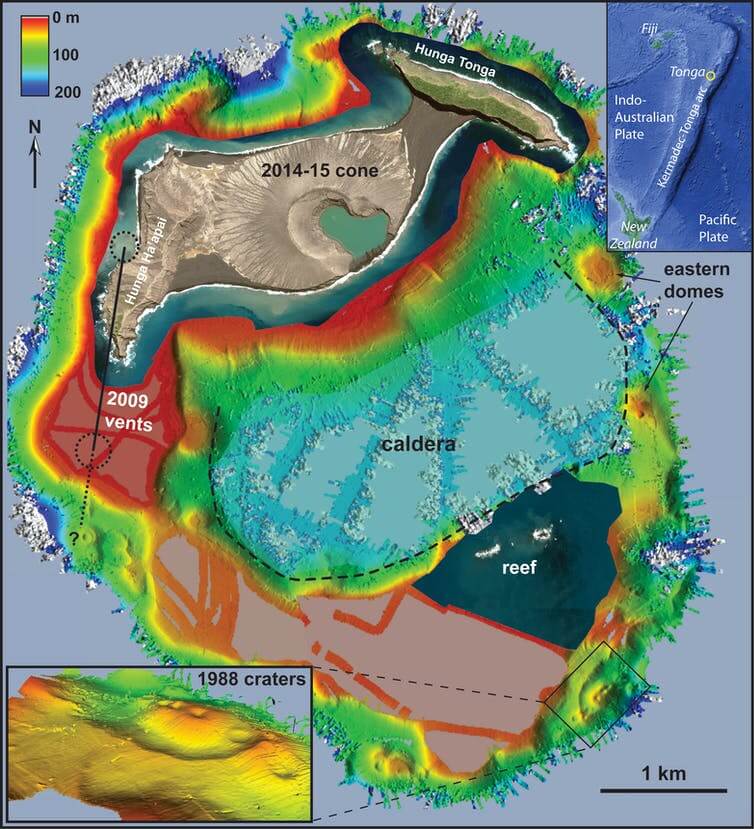 Being a submarine volcano means that every eruption will come in contact with water. As we know, magma and water do not mix very well, which means that they can amplify the already explosive eruption from below the ocean surface. The key is the speed at which the magma breaks through the ocean floor. The faster it is, the more explosive the interaction.

Below is an image of the island in 2014, as it grew quite a lot from its first appearance in 2009. The main activity lately was from the central part of the island, where the main vent can be seen. 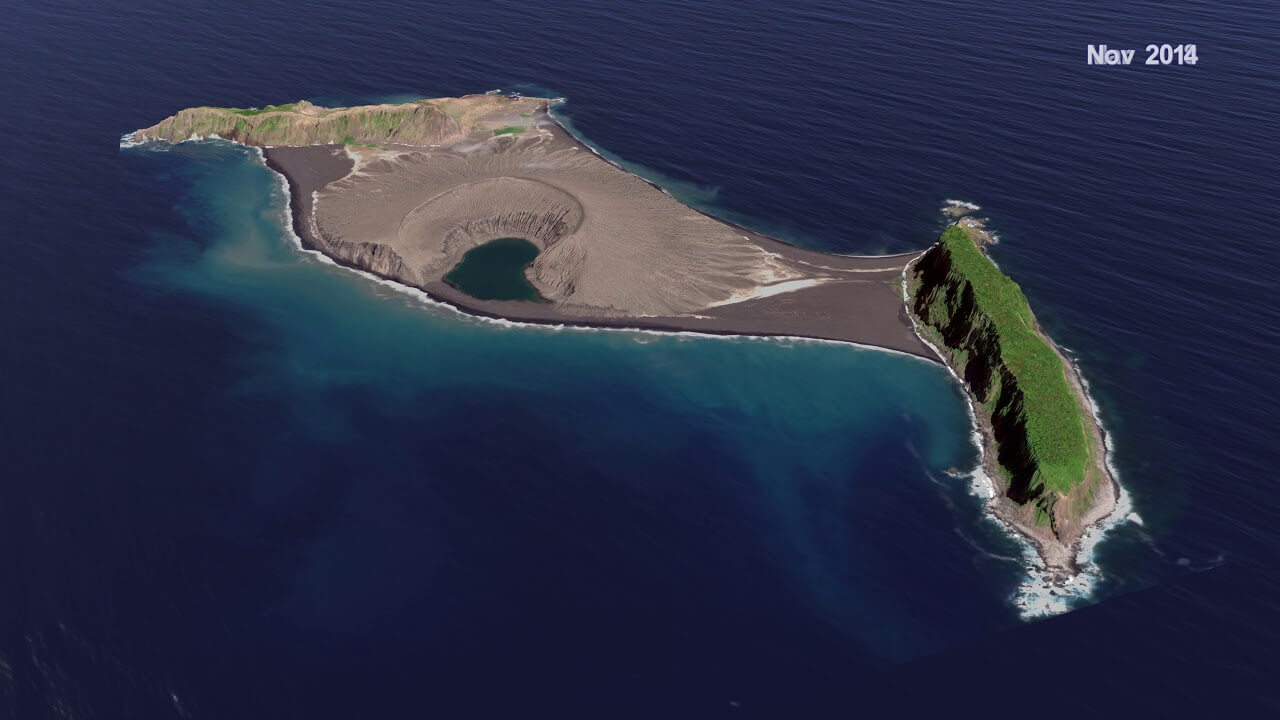 The volcano is part of the highly active Tonga volcanic arc, a subduction zone extending northeast from New Zealand towards Fiji. It lies around 100km (62mi) above a very active deep seismic zone.

One very good example of a subduction zone is actually in the United States, in the pacific northwest. There we can see the Juan de Fuca plate sliding beneath the North American plate. That creates earthquakes and also molten material. The molten material rises up, driving the volcanoes of the Cascades. 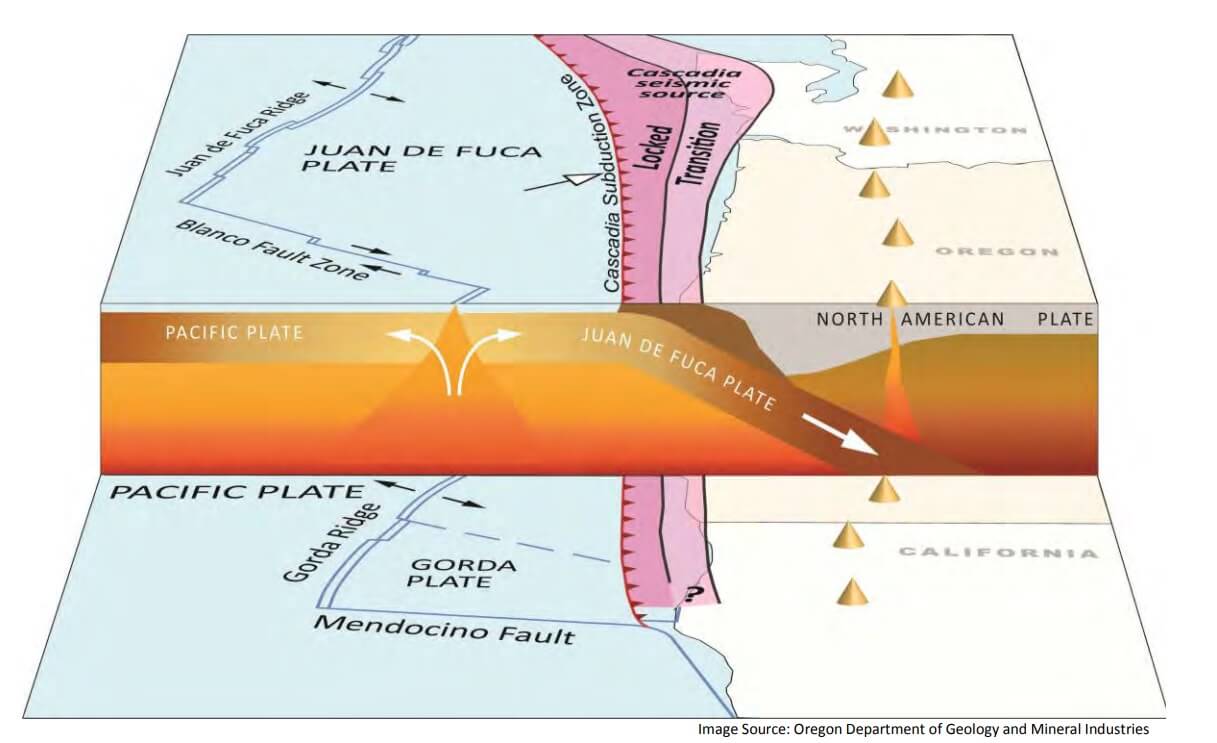 Looking again at the Hunga Tonga, we can actually see the subduction zone on the image below. It can be seen on the right end of the image, where there is a deep trench. That is where the Pacific Plate subducts under the Indo-Australian Plate. It is also creating molten material that rises up into the crust, creating the Tonga volcanic arc. 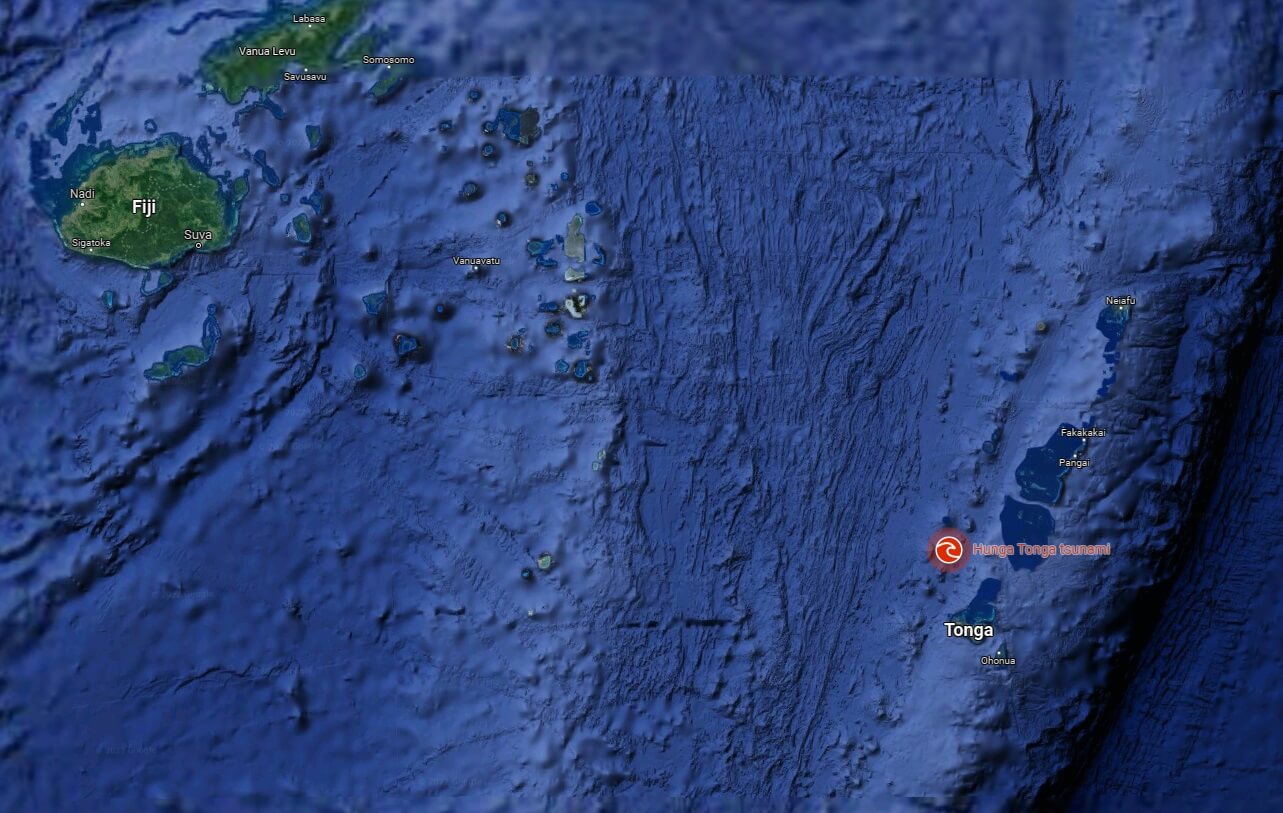 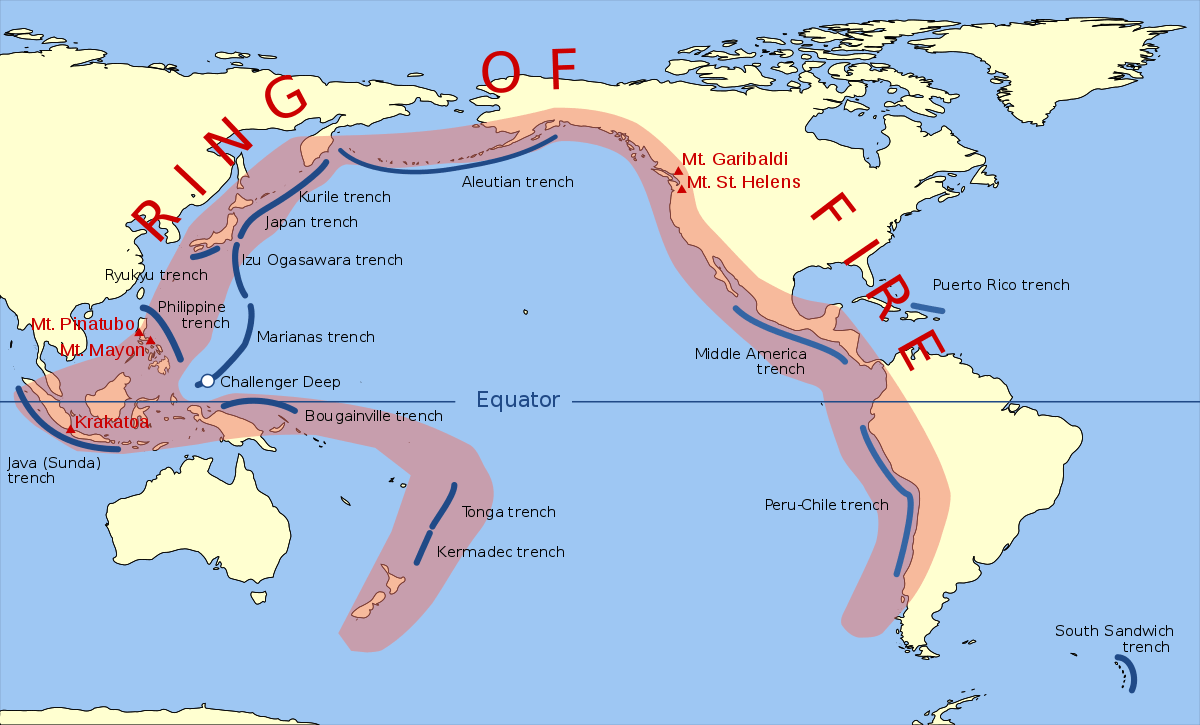 On 20 December 2021, the volcano erupted after several years of dormancy. It caused a large plume that was visible from the surrounding islands. The Volcanic Ash Advisory Center in Wellington issued an advisory to airlines.

Explosions were heard up to 170km (110mi) away. The initial eruption continued until the morning of 21 December. Activity continued, and on 25 December, satellite imagery showed that the island had increased in size.

Volcanic activity calmed down again on 5 January 2022, before restarting on 13 January, sending an ash cloud 17 km (55,000ft) into the atmosphere. The image below shows the satellite capture of the Hunga Tonga eruption on January 13. 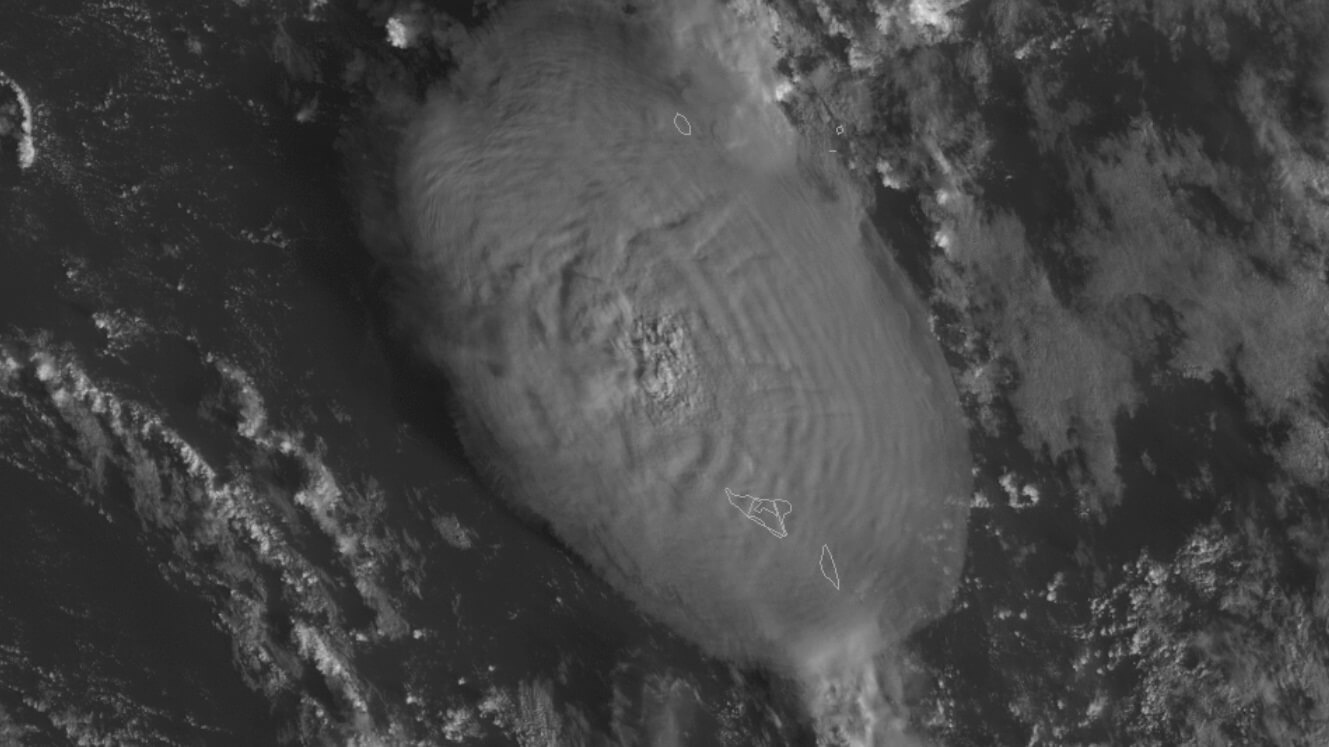 The volcano violently erupted again on the morning of January 15. A large explosive eruption began, which was about seven times more powerful than the eruption on 20 December 2021. There were numerous reports of loud booms across Tonga and other countries, such as Fiji and as far away as New Zealand, Australia, and even Alaska.

Below you can watch a video animation of the large explosive blast from Hunga Tonga. Take a very close look at the massive shockwaves that spread out from the eruption, which later crossed the entire planet.

Near the eruption, the explosion was powerful enough to damage property, and shatter windows. A tsunami warning was issued just after 5:30 p.m. by the Tonga Meteorological Services. A tsunami came, flooding the coastal areas in Tonga. A 1.2m (3.9ft) tsunami was observed in Nukuʻalofa, Tonga, and a 0.6m (2.0ft) tsunami in American Samoa.

The eruption began at 4:00UTC. A small plume of ash was visible on the satellite imagery by 4:10UTC, marked on the image below.

In just 20 minutes, the ash plume already rose high into the troposphere, likely around 13-16km.

Looking from a different angle, the visual perspective was very stunning. We can see the main central area which is rising the highest and the ash cloud spreading out. Ashfall was being reported on the islands nearby to the Hunga Tonga volcano. 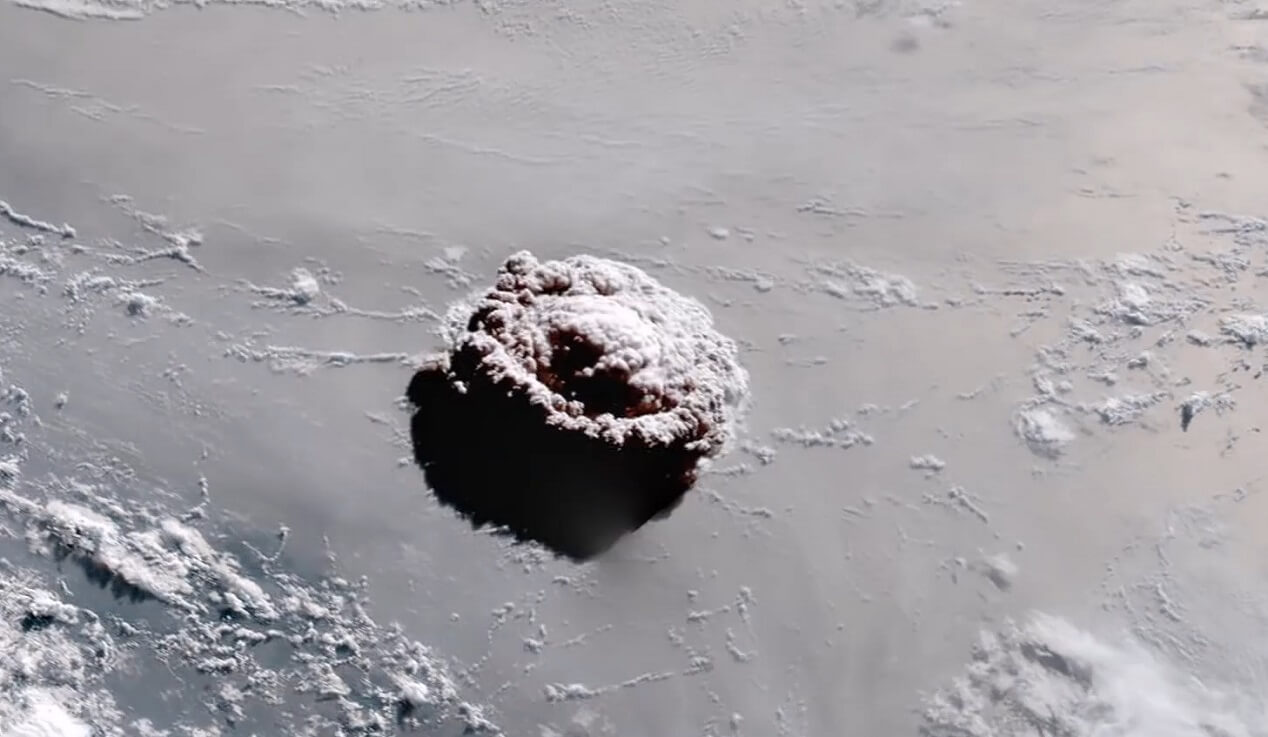 The eruption continued, pushing out more material. But as we can see on the image below, instead of creating a large cold cloud, the ash cloud actually began to warm, despite rising up even further into the stratosphere. But why is that? 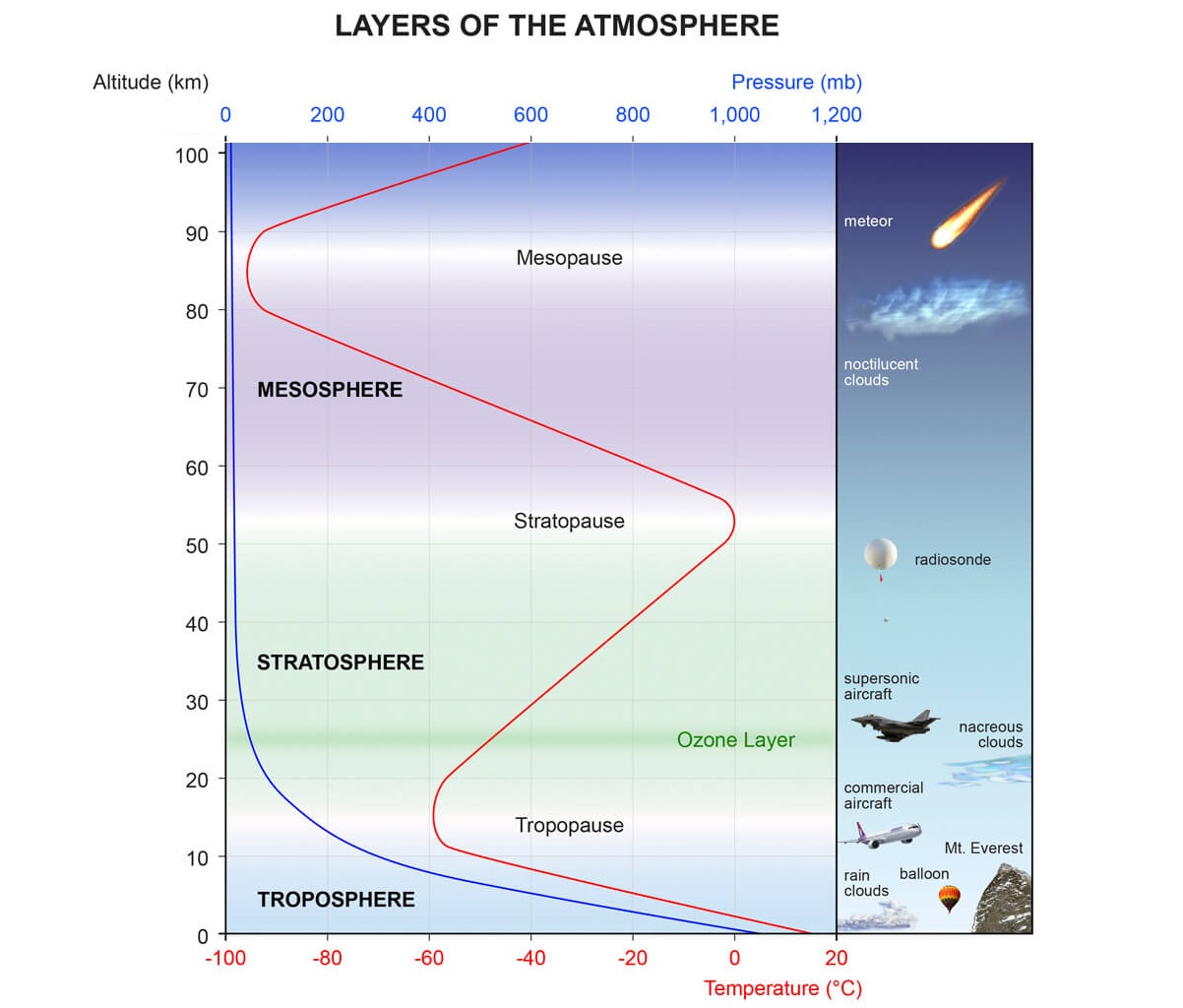 Going back to the eruption, we were able to witness that stratospheric layer, as you can see quite warm cloud temperatures below. The ash plume reached up to around 30km (18.6mi) in altitude based on observed temperatures, which is well within the stratosphere. 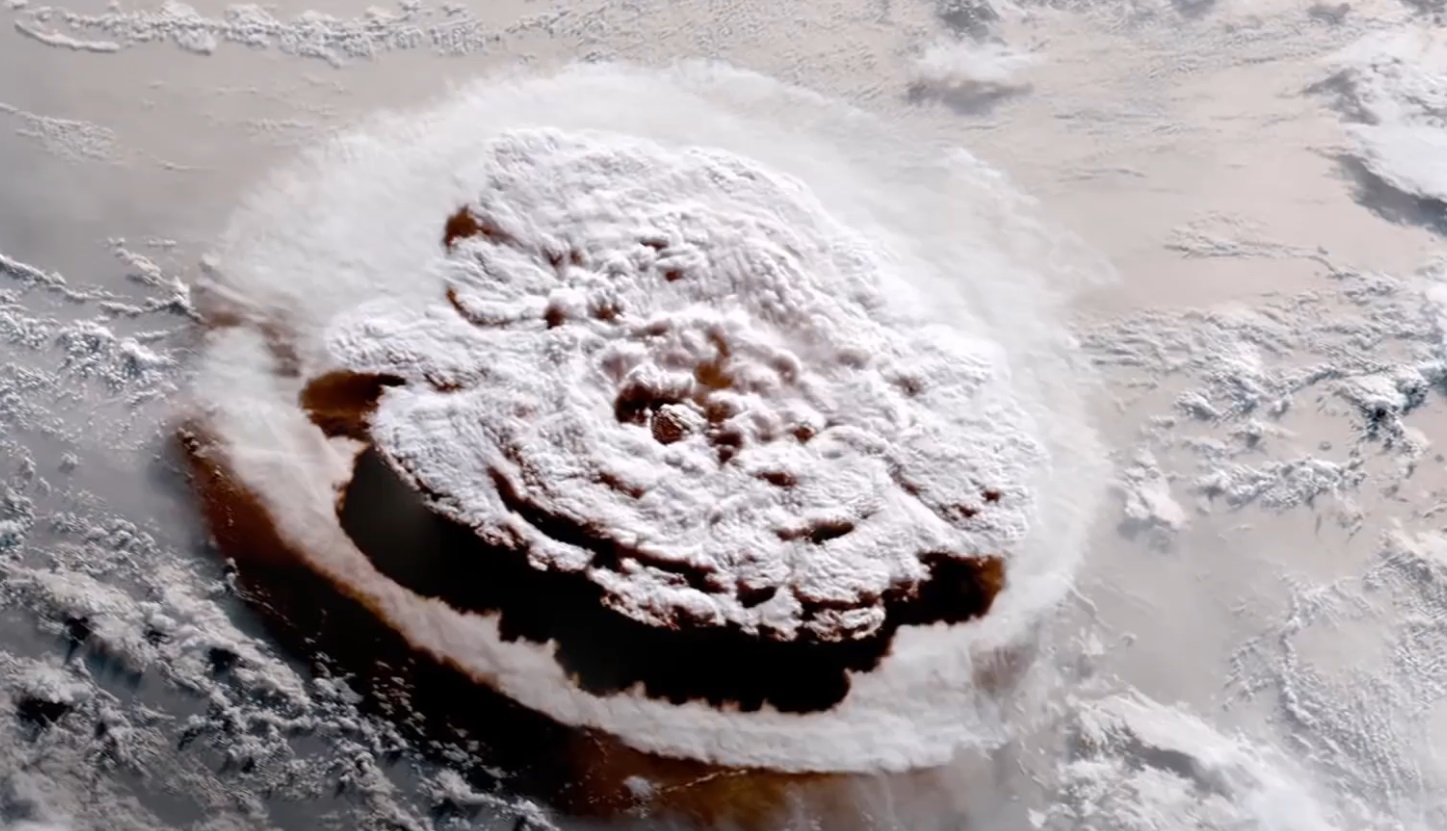 At this time, a very high amount of lightning was being detected. Ash cloud contains a lot of fine particles that create charge, just like in a storm cloud. Below we can see a lightning detection system, showing a huge amount of lightning in the ash cloud. The total number of lightning strikes detected is now preliminary at over 190.000. 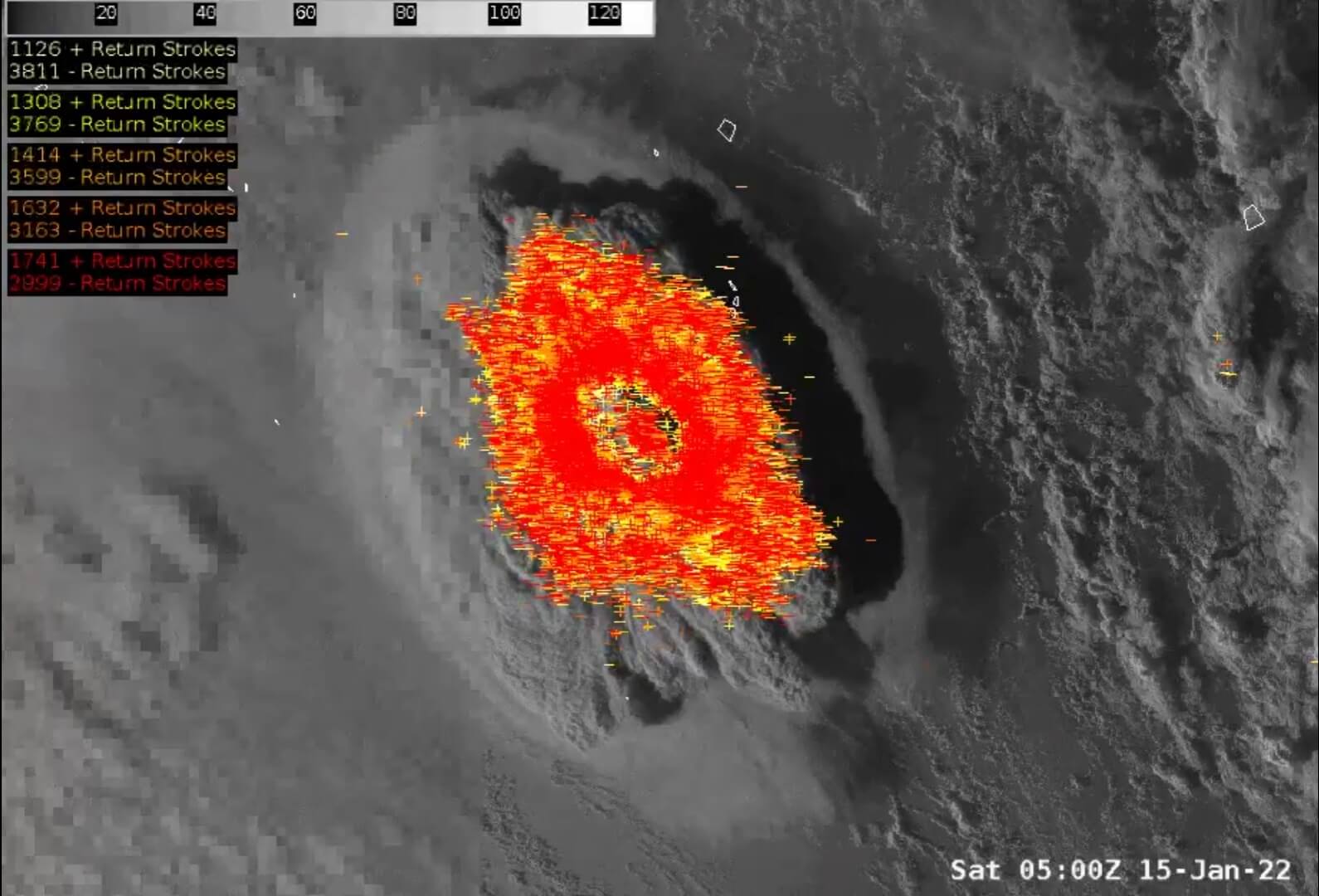 At 6:40UTC, the stratospheric part of the cloud began cooling again. That was a sign that it is losing altitude, dropping back down towards the lower levels.

The separation of the two clouds can be seen in the GeoColor imagery. Below you can see a gray cloud drifting west. That is the stratospheric part of the ash cloud, driven by the stratospheric easterly winds. The colder (lower) tropospheric ash cloud is quite stationary and brighter in color. 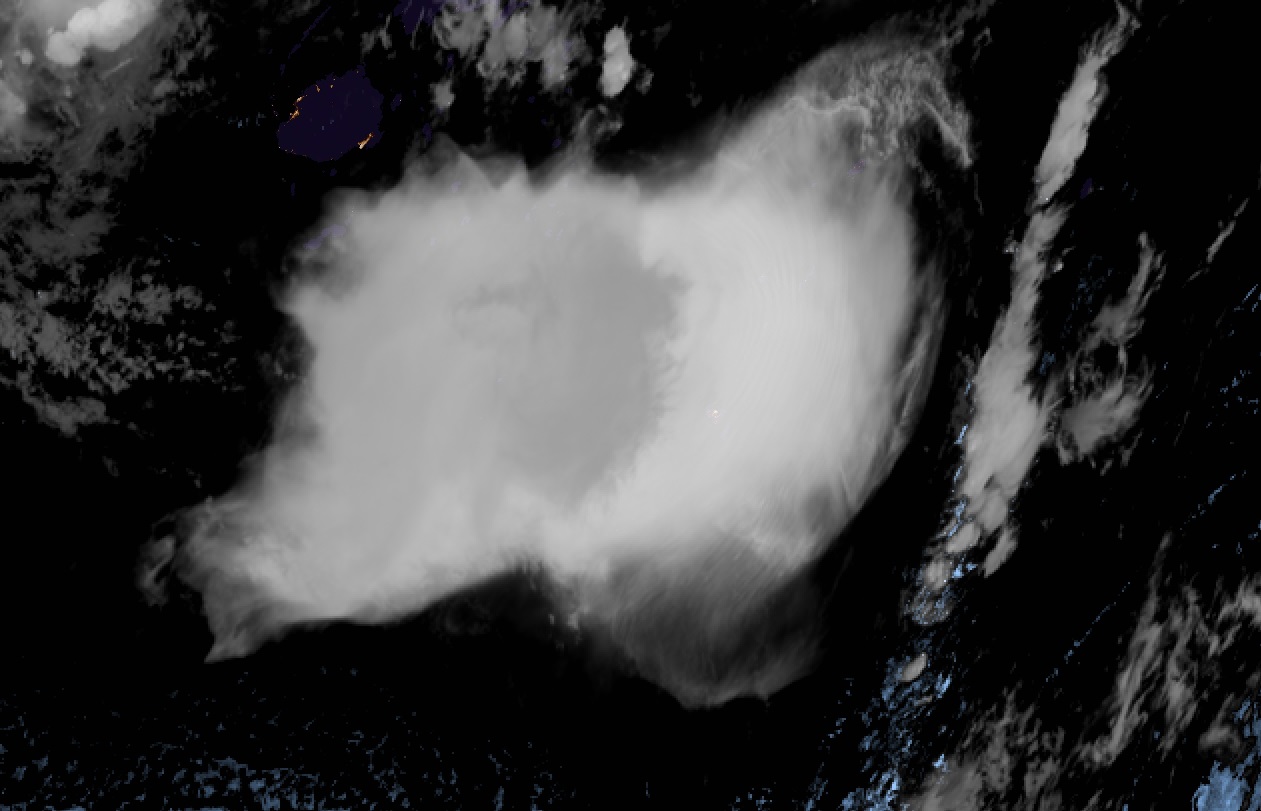 There are no estimates yet of the amount of sulfur being ejected into the stratosphere by the latest eruption. The image below from the Copernicus EU project shows the total atmospheric sulfur dioxide. This analysis was done before the last eruption, but already shows a cloud of sulfur over the Tonga island from previous eruptions. 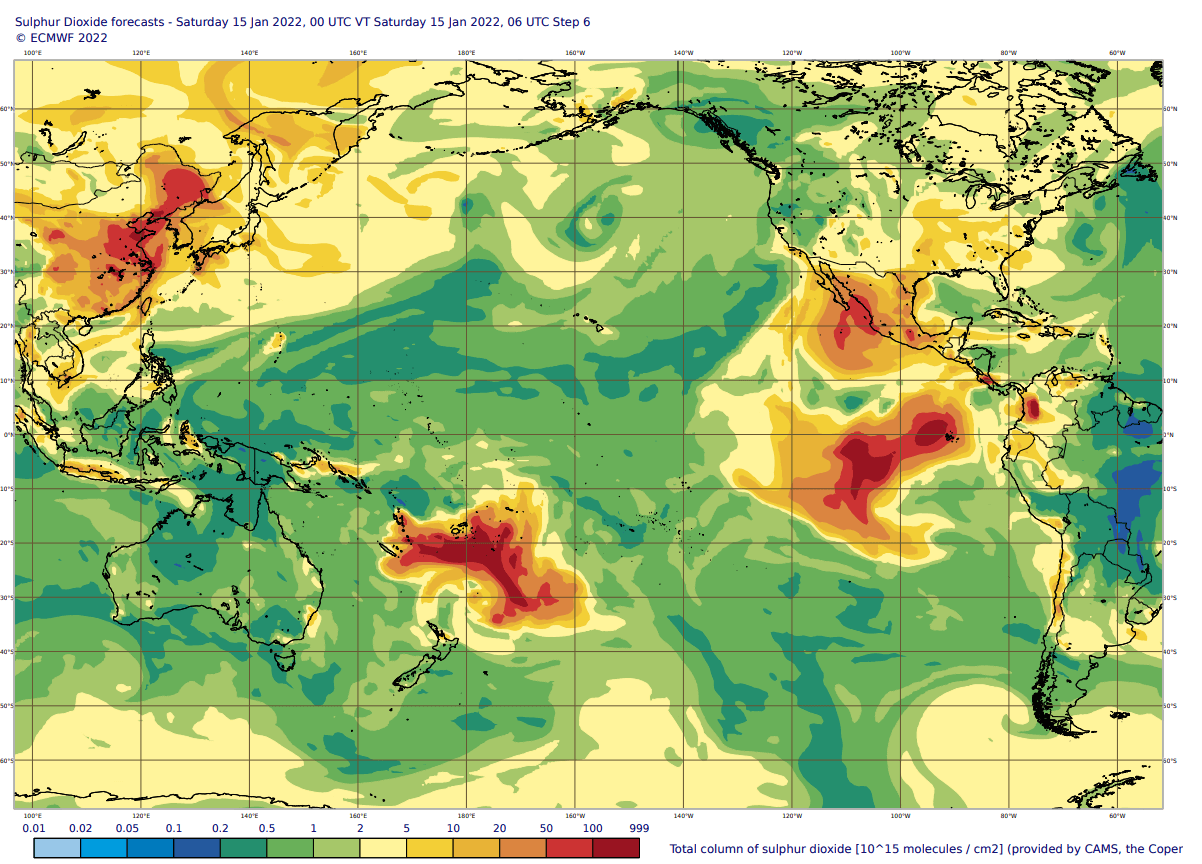 There, the sulfur reacts with water to form a hazy layer of aerosol particles. Over the course of the next two years, strong stratospheric winds spread these aerosol particles around the globe.

Because these particles scatter and absorb incoming sunlight, they create a cooling effect on the Earth’s surface. The Pinatubo eruption increased aerosol optical depth in the stratosphere by a factor of 10 to 100 times normal levels measured prior to the eruption. As a result, scientists measured a drop in the average global temperature of about 0.6°C (1°F) over a 15-month period.

This eruption from Hunga Tonga is likely not enough to affect the global temperatures, as it was just a series of single blasts over a short period of time. But such an eruption if prolonged over several hours to days nonstop, could exert a short-term cooling effect. We will see what the sulfur data shows once available.

There is no direct visual observation of the island, but some satellite measurements do show that the island is pretty much gone. The image below is a comparison of the before/after this major explosive event. On the right, we can see that the island has been blown apart. 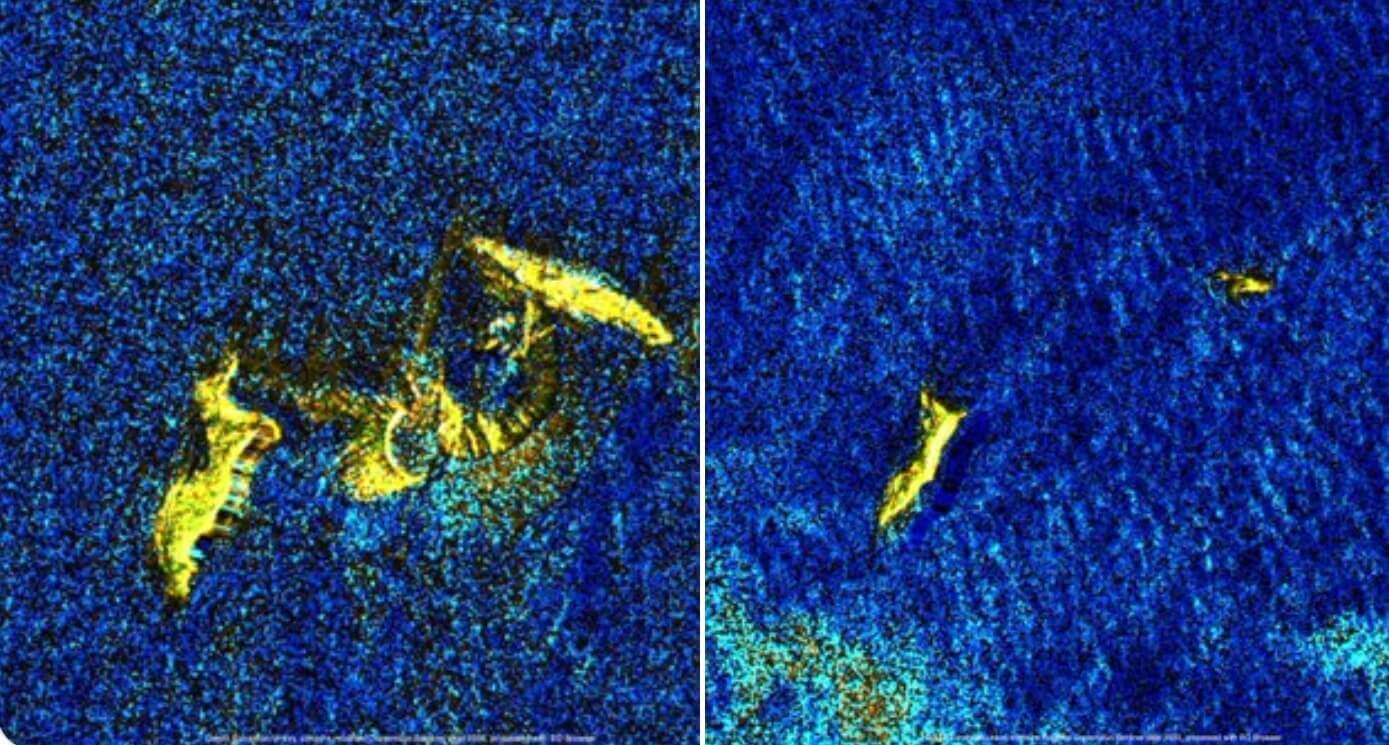 GLOBAL IMPACTS FROM THE ERUPTION

An eruption of this size is not so common. It was so powerful that its effects were felt across the whole world. The explosion was so powerful and violent, that the sound from the blast was heard all the way to Alaska! That is over 9.300km (5.800mi) away. The USA National Weather Service as confirmed the sound source via instruments. 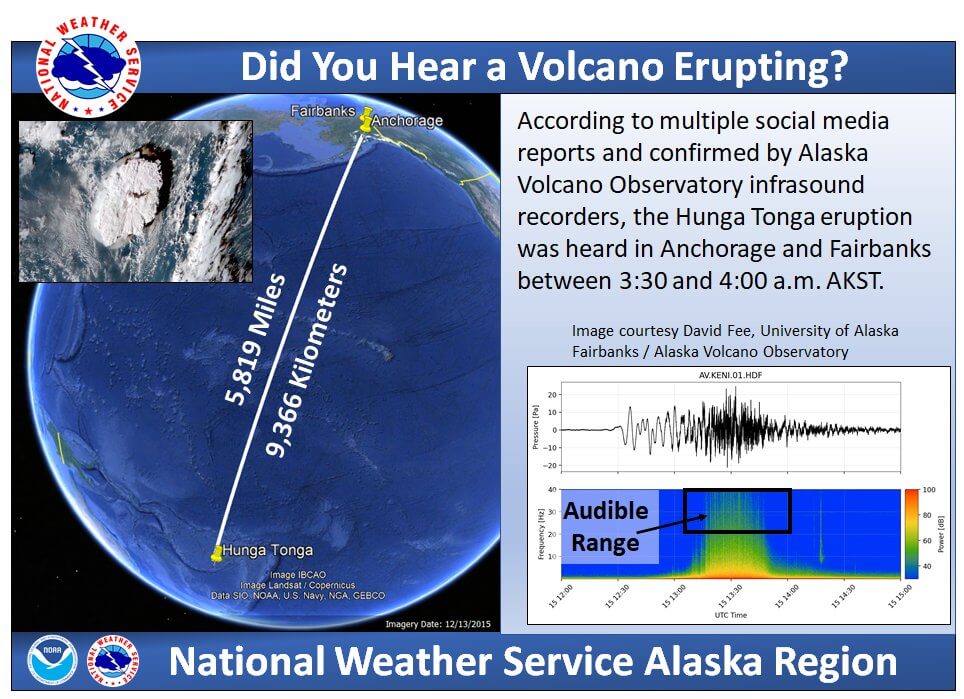 But if the sound traveled far, the shockwave then traveled even further, actually going around the entire planet. Pressure measurements over the entire world have confirmed the passing of the shockwave after several hours of travel.

Below is an example from weather stations in Japan, nicely recording the pressure increase as the shockwave moved over.

The shockwave was also recorded very easily in Europe. Below we have a composite from various stations in Slovenia, Central Europe. Despite being over 17.000km (10.500mi) kilometers apart, the incoming shockwave had a very clear signature, lasting for a bit longer than on the stations near the volcano.

One good example of a clear signal comes from Anchorage, Alaska. A tide gauge station recorded a nice textbook pressure change, with a pressure rise as the shockwave moves in, and then a pressure drop as the wave passes. Such pressure change detections are reported from all around the world, confirming that the shockwave did indeed travel the entire planet. 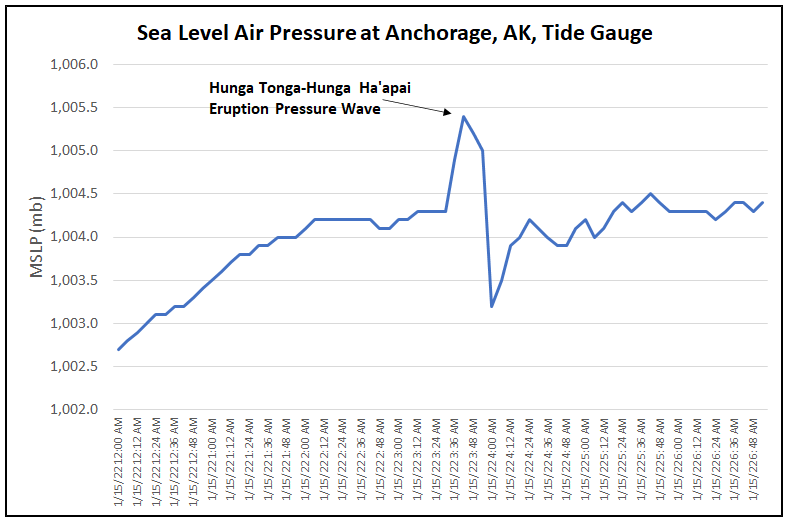 But volcanic underwater explosions can also create tsunamis. We already wrote above that tsunamis have hit the nearby islands due to the eruption. But it did not end there, as a tsunami wave was sent across the Pacific Ocean. 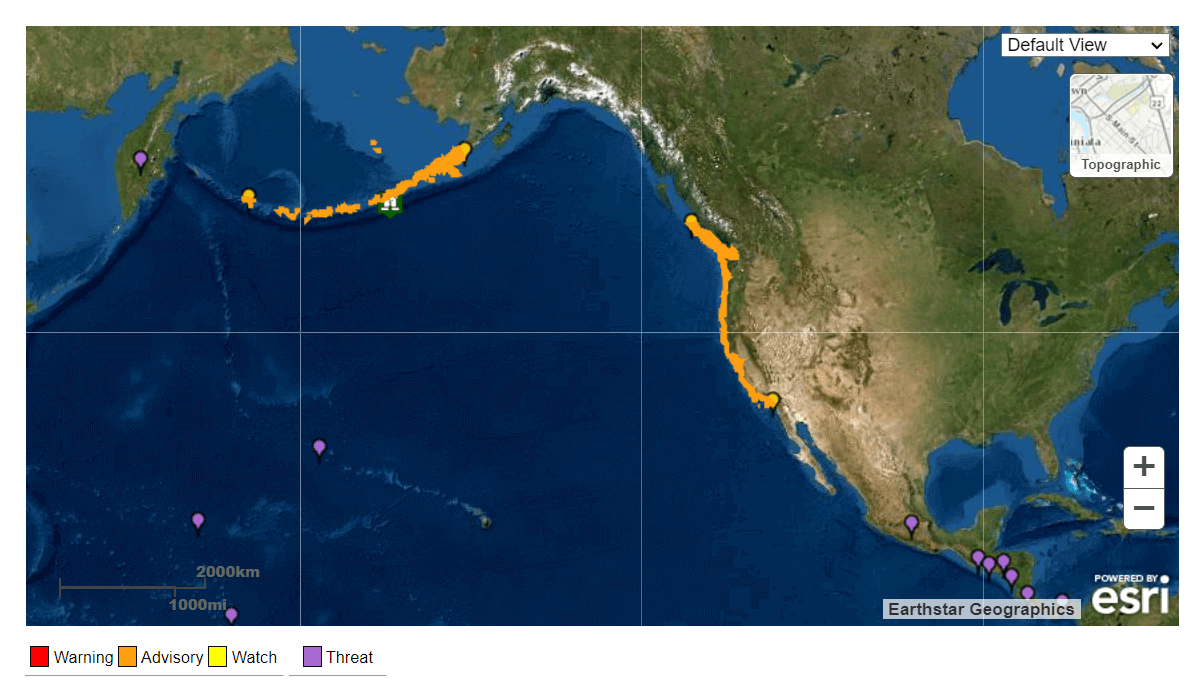 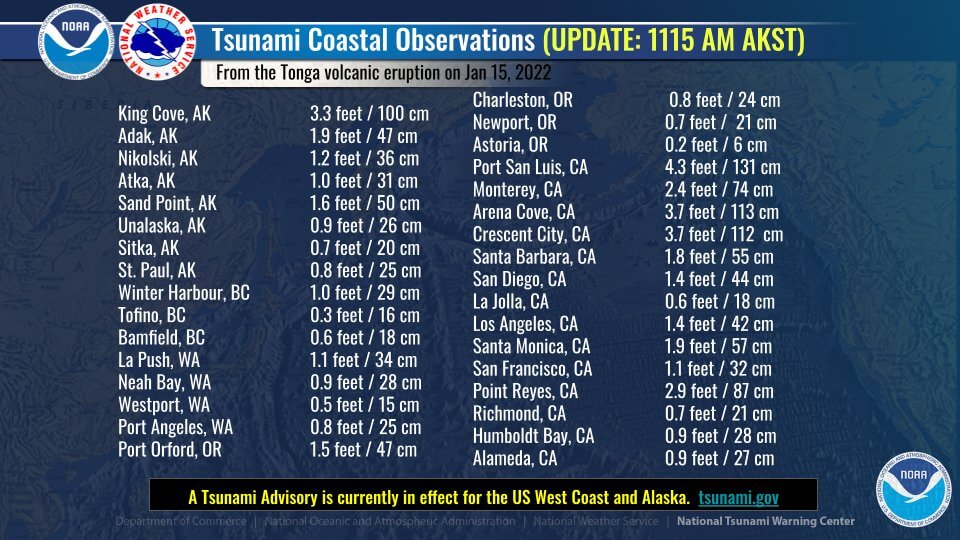 New eruptions are not excluded from the Hunga Tonga volcano, including a repeat of yesterday’s (Jan 15) eruption.

We will keep a close eye on the global volcanic activity, informing you of any significant development. So make sure to bookmark our page, and also, if you have seen this article in the Google App (Discover) feed, click the like button (♥) there to see more of our forecasts and latest articles on weather and nature in general.

A Major Winter Storm Izzy to Impact 100+ Million across the East and Northeast U.S. on Sunday into Monday, triggered by a strong Polar Vortex lobe over Canada