One would think it is December in Canada, has to be very cold. Well… not in 2020! An unseasonably warm air mass will spread from the North Pacific into western Canada and bring very warm days this week. Temperatures will be exceptionally warm, nearly 25 °C higher than normal for early December.

The weather model consistency has been impressive over the past days, trending a tendency to develop an exceptional temperature anomaly across western Canada (northern half of the North American continent) into early December. A strong blocking pattern will establish.

Such pattern normally trends into much warmer temperatures, especially through the mid-level parts of the troposphere (e.g. 850 mbar level or approximately 1500 m above sea level elevations). While the first days of December are colder than normal across much of the United States, it will be *much* different over Canada. A complete flip to say at least, but extreme.

Actually, the temperature anomaly across northern Alberta, Manitoba, and Northwest Territories will be beyond exceptional. The temperature at the 850 mbar level will be more than 25 °C warmer than the long-term average. This is very extreme for the region!

As we can see from the 850 mbar temperature anomaly video animation below, much of Canada, including Arctic Canada and also a large part of Alaska will experience much higher temperatures than normal for early December.

Indeed, the translation of these extremely warm mid-level temperatures to the ground levels is often not happening, as strong thermal inversions could be trapped under the upper ridge during the winter months. But this time, a powerful North Pacific cyclone will occur, so a strong southwesterly flow and warm advection will be ongoing into western Canada.

So also the lowest, near-surface levels will experience very high and unseasonably warm temperatures across the Canadian prairies of Alberta and also further north. To give you an idea of what such an anomaly actually means…

Attached below is the 850 mbar temperature forecast for Yellowknife, Northwest Territory in western Canada. The long-term average temperature is almost near -15 °C, while th forecast indicates it will be more than 25 °C higher, so near +10 °C at this 850 mbar level. That is beyond exceptional! 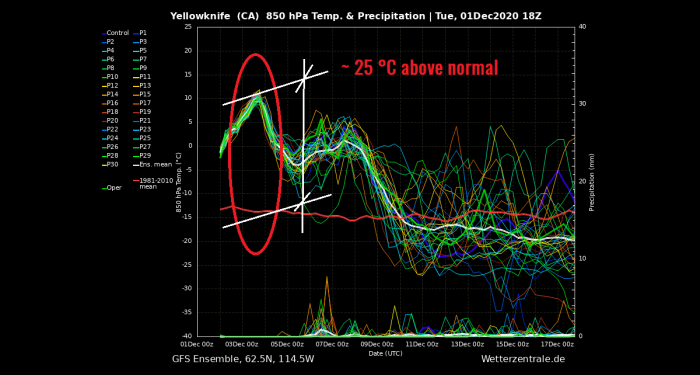 Air mass advecting across the mountain range will develop a Chinook foehn wind event from the eastern slopes of the northern Rockies down into the Alberta prairies. This could bring some unusually warm days in the states affected!

While there is still a quite significant cold outbreak spread across the United States, a strengthening upper-level ridge further across the western CONUS has established. The weather models are now in good agreement that a very strong ridge expands also across western and central Canada over the next few days. 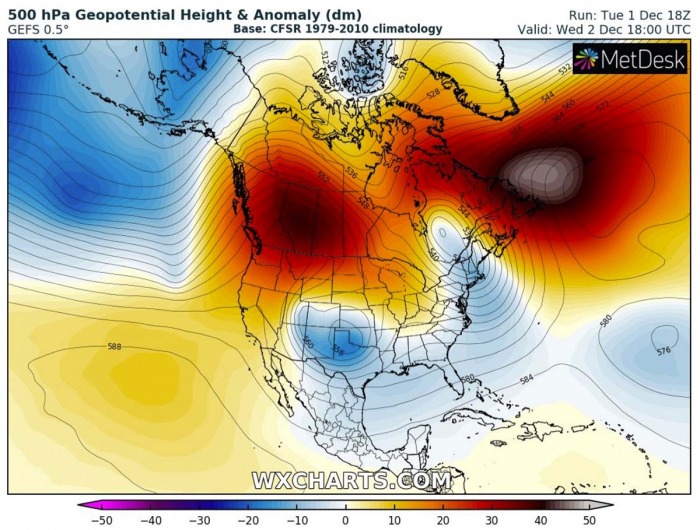 And so is the surface pressure responding. A strong high-pressure system is strengthening across the western United States, expanding into western and southwestern Canada through mid this week. At the same time, deep trough and seasonably strong surface depressions are developed over the North Pacific. 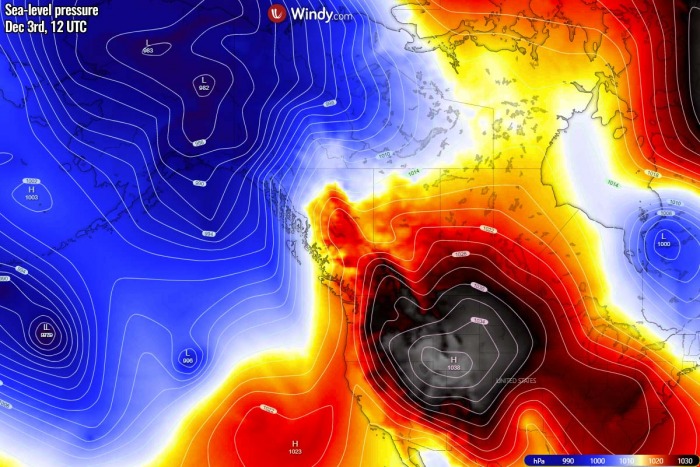 This hints that a southwesterly flow is established in between these two large scale features, advection much warmer air mass from the Pacific ocean towards the Pacific Northwest and further into western Canada.

The upper ridge will begin strengthening this Wednesday, expanding from the western Contiguous United States into western Canada. The attached temperature anomaly by the GFS model for the 850 mbar level indicates that northern Alberta and Northwest Territory will see 15 to more than 20 °C warmer temperatures than normal. 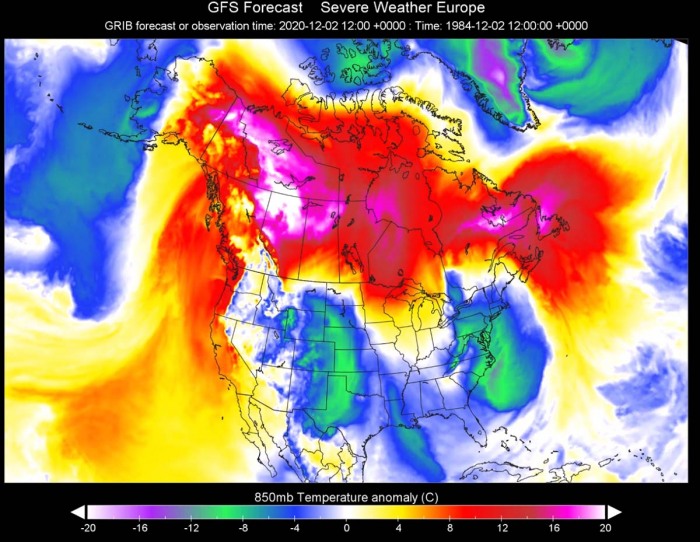 With southwesterly winds also increasing down the slopes from the mountain range of the Pacific Northwest, dry foehn winds will develop. A classic Chinook wind event actually. So mild weather is expected to spread across the region. Southern portions of the Northwest Territory are likely to see peak afternoon temperatures higher than 10 °C! 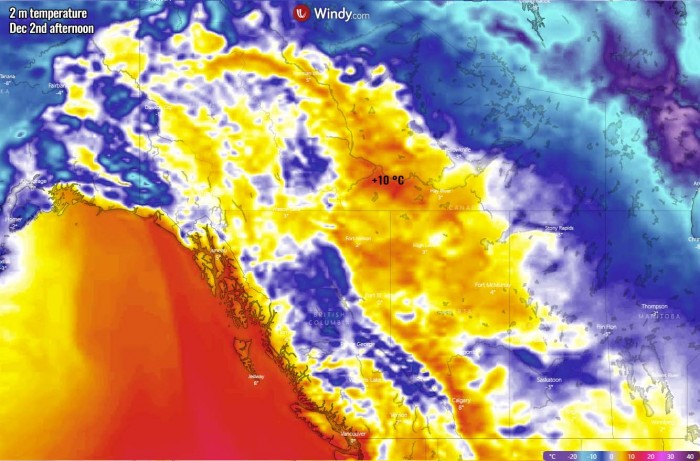 It will be also very warm along the slopes of the mountain range in northeast British Columbia and Alberta, 7-9 °C seems reasonably possible there in the afternoon as well.

The peak of this extremely warm advection will be on Thursday. As we can see from the attached 850 mbar temperature anomaly chart below, an exceptional positive anomaly is expected. More than 20 to nearly 25 °C warmer temperatures than usual are forecast for much of Alberta, Saskatchewan, and Northwest Territory. 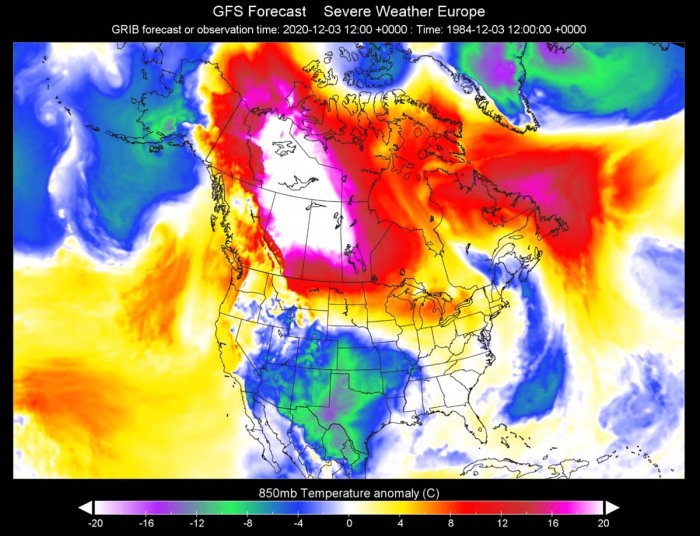 This will indeed respond also in the lowest levels again, as Chinook winds will continue on Thursday. Around 6-10 °C (even more locally possible) will be experienced across the prairies from southern Alberta into the western Northwest Territory and also eastern Yukon state. 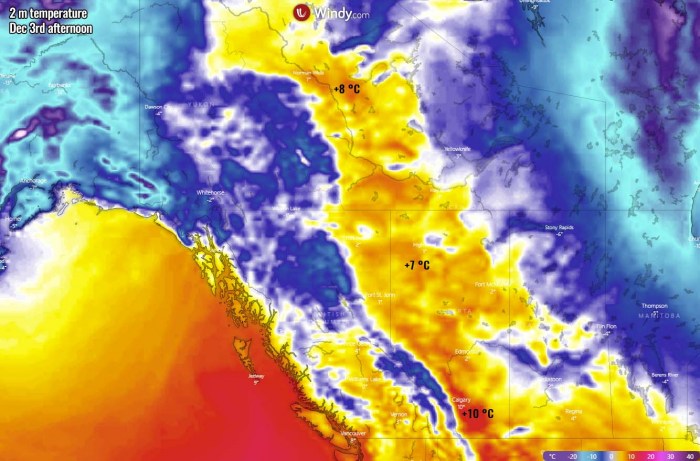 Much colder, though still unseasonably warm air mass, will be spread further east. And over Alaska as well. 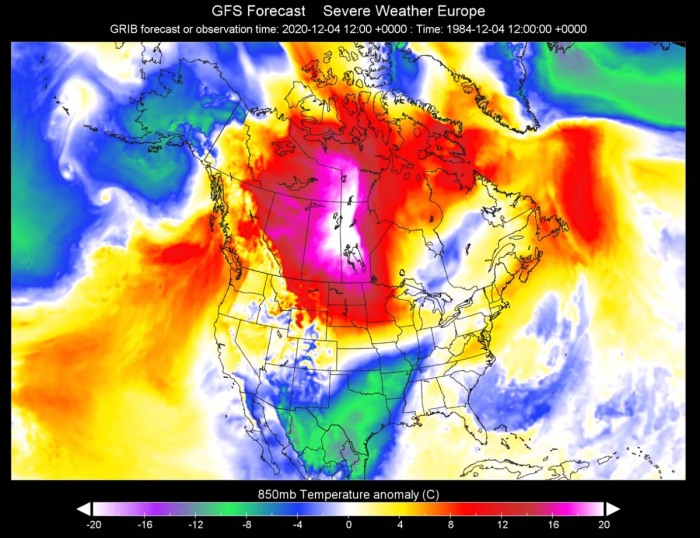 However, a strong temperature inversion within a large cold pool through near-surface layers will limit any significant warming/mixing from the mid-levels. Therefore, temperatures are unlikely to climb out of freezing there. But it will another warm day further west, across Alberta and Saskatchewan. Again, 6-10 °C will be likely. 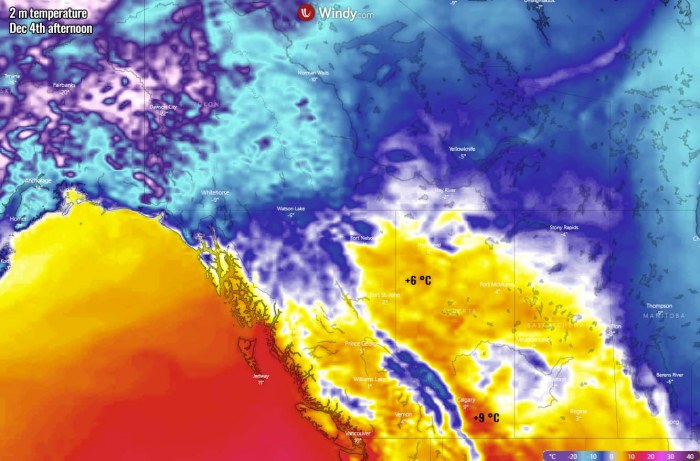 Northwest Territory will cool down into freezing again, despite still being above normal for early December.

ANOTHER EXTREME WARMTH FOR THE WEEKEND

It seems that the pattern might repeat itself again over the weekend. As the global weather models are trending, another upper-level ridge blocking high will strengthen over Canada, while a very deep North Pacific extratropical storm will develop. The powerful southwesterly jet stream will establish in between. 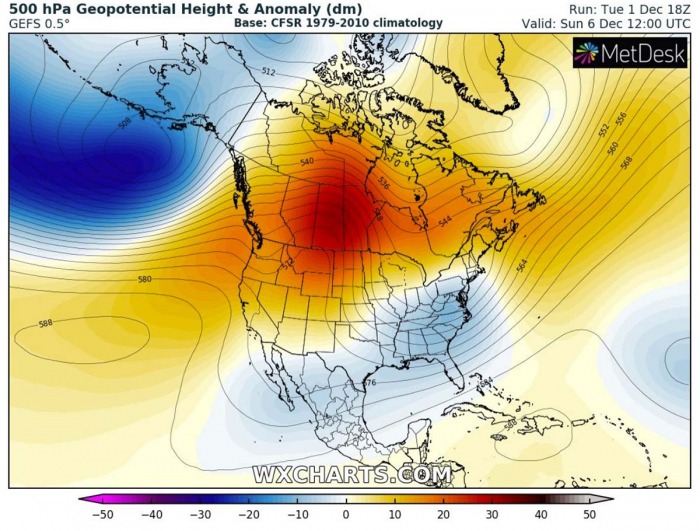 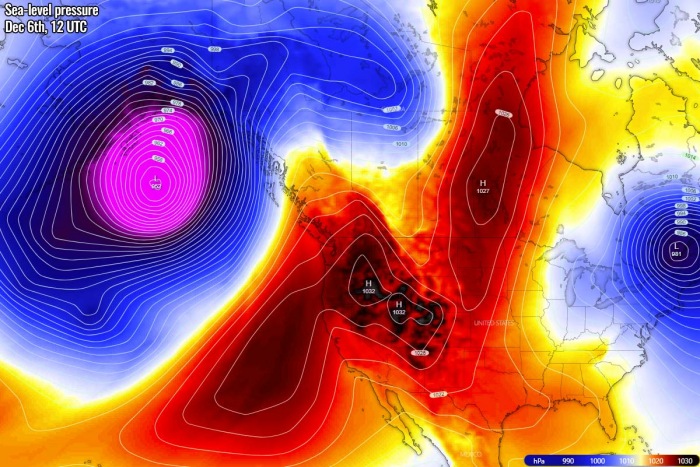 If we remember from earlier discussion, what is shaping up for this weekdays, it does look like yet another extremely anomalous air mass will spread into a large part of Canada on Sunday. Again, more than 20 °C warmer air mass is seen. 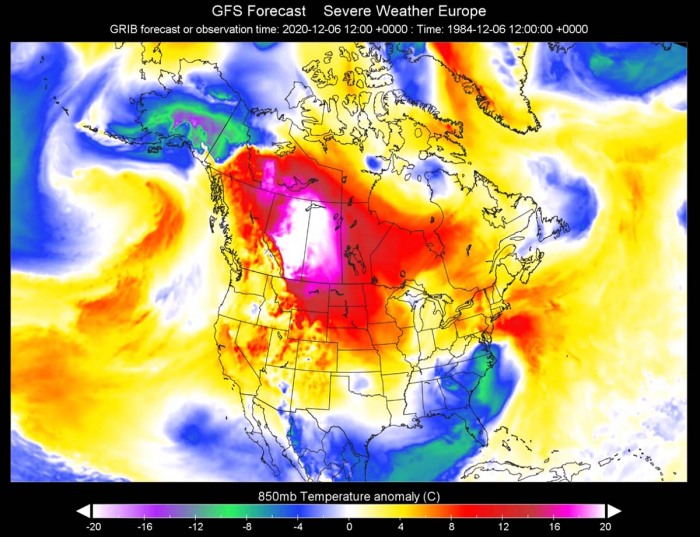 As southwesterly winds will again be strong across the Pacific Northwest, Chinook winds are likely to develop again. Therefore resulting in more warm days for early December. 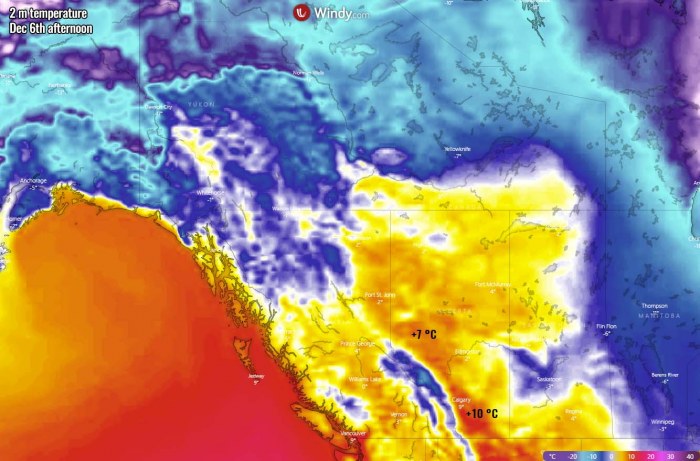 *Chinook winds or simply Chinooks, are föhn downslope winds in the interior West of North America, the Canadian Prairies, and the northern Great Plains. It is a warming wind from the Pacific ocean into the interior regions of the Pacific Northwest. The air mass cools as it climbs the mountain range, bringing rain or snow to the peaks and much warmer air down the eastern slopes.

TONS OF SNOW FOR THE PACIFIC NORTHWEST

The persistent southwesterly moist and warm winds from the Ocean into the Pacific Northwest will introduce a huge amount of precipitation over the mountain range. Nearly 200 to more than 300 mm is forecast until the end of the weekend. 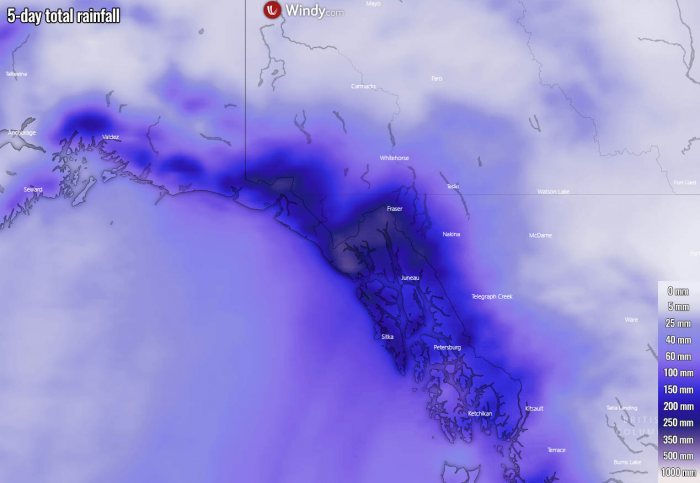 But indeed as the mountain range is very high, most of the precipitation inland will be as snow. So models do hint an extreme amount of snow, potentially more than 200 cm of fresh snow until Sunday! 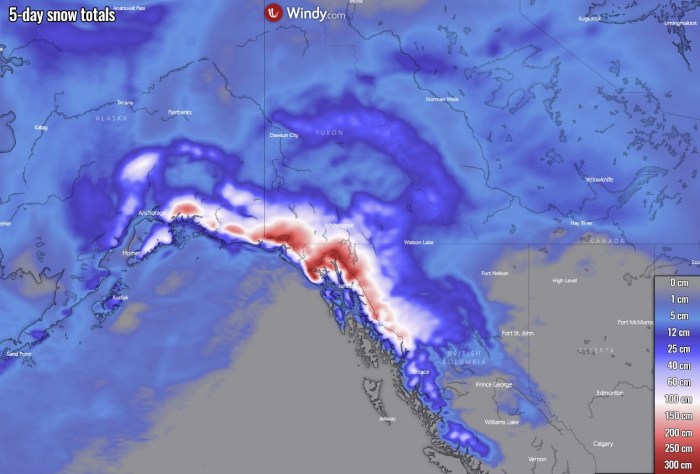 A lot of snow is also forecast for southern Alaska as deep cyclones will bring a lot of moisture from the south. While Southeast Alaska will see a lot of rain.