A major snowstorm with blizzard conditions is expected to develop on Wednesday into Thursday across the northern Mediterranean region and the northwestern Balkan peninsula. Northern Croatia, parts of Slovenia, and North Italy will be impacted with heavy snow, blizzard, and also a dangerous ice storm across northwestern Croatia and southwestern Slovenia through Wednesday night.

December 1st is officially the start of a meteorological winter for the Northern hemisphere. And it seems that this year, some parts of Europe took it seriously.

A deep trough enters the region and a significant winter storm is forecast to develop over the northern Mediterranean and the northern Balkan peninsula on Wednesday through Thursday morning.

A major snowstorm is forecast for parts of North Italy, Slovenia, and Croatia where a combination of severe to extremely severe downslope Bora winds will develop blizzard conditions with heavy snow through Wednesday evening.

A particularly dangerous situation could develop across parts of southwestern Slovenia and northwestern Croatia through Wednesday night, as warm advection aloft brings much warmer temperatures over freezing cold near the surface that will persist with easterly winds. This could introduce a dangerous ice storm and significant freezing rain event in some areas.

Conditions will gradually improve on Thursday.

TROUGH DEEPENING OVER THE ALPS

As we can see on this Tuesday evening satellite image, the relatively deep trough/low is emerging south into central Europe. Strong west-southwesterly winds are advection high moisture towards Italy, curving northeast into the Balkans. In the lee of the Alps, a surface depression is underway.

Here is quite impressive satellite animation of a developing pattern through Tuesday. The southward emerging upper low is very well visible, with textbook cyclogenesis south of the Alps. Notice also a large low near the Azores and Madeira.

The overall weather pattern over the European continent through mid this week reveals strong upper-level ridging over the North and further west over the North Atlantic, while a deep trough is strengthening over the Arctic region. In between, a deep upper low is establishing over the northern Mediterranean. 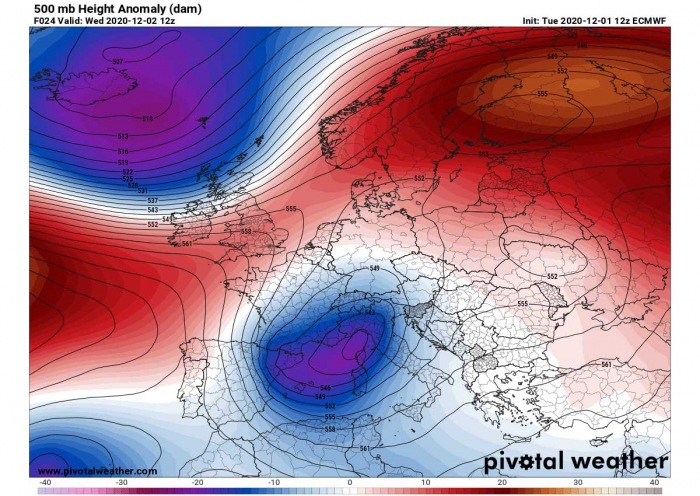 The low is expected to reach its peak by Wednesday afternoon hours, then gradually weaken into Thursday.

As typically in such a pattern, a secondary surface low develops over the northern Mediterranean and travels towards the northeast. The low will not be particularly deep this time, but it will intensify the wind field as the pressure difference between the strong high-pressure system over Russia will increase.

The strongest pressure gradient will be along with the Dynaric mountain range over the western Balkan peninsula. 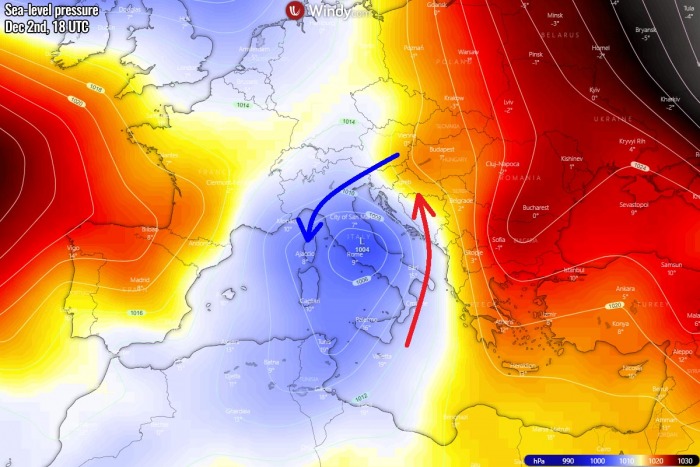 In response to the increasing winds and pressure, a strong cold pool of freezing air mass will develop across the northern Balkan on Wednesday. Temperatures at the elevation of approx. 1500 m above sea level (850 mbar geopotential height) will be close to -10 °C over Slovenia, while those will be much warmer further west. A strong temperature gradient will establish.

In other words; the higher the temperature/pressure difference, the stronger the winds.

Colder temperature will also spread under the upper low across northern Italy, especially over the northern Apennines. 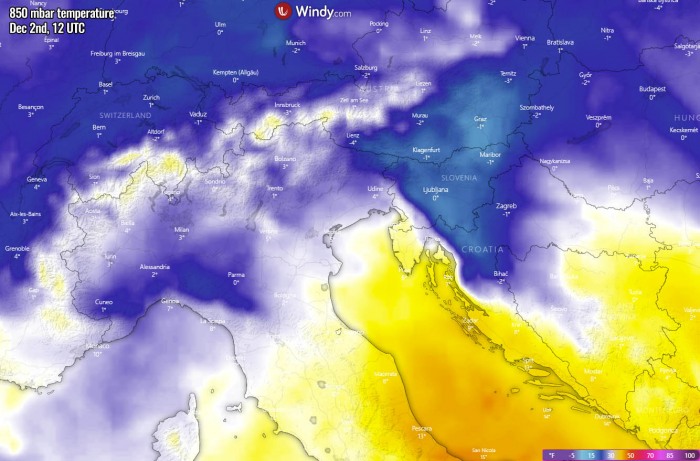 Through the Wednesday evening and night hours, the upper low will begin losing its strength while its associated surface low will eject towards the northern Adriatic Sea and the Balkan peninsula. This will gradually lead to a weakening of the cold advection and especially deliver much warmer air mass further north against the cold pool over Slovenia and northern Croatia.

While temperatures at the surface will remain below freezing. The thermal inversion will develop… see further down for its effects. 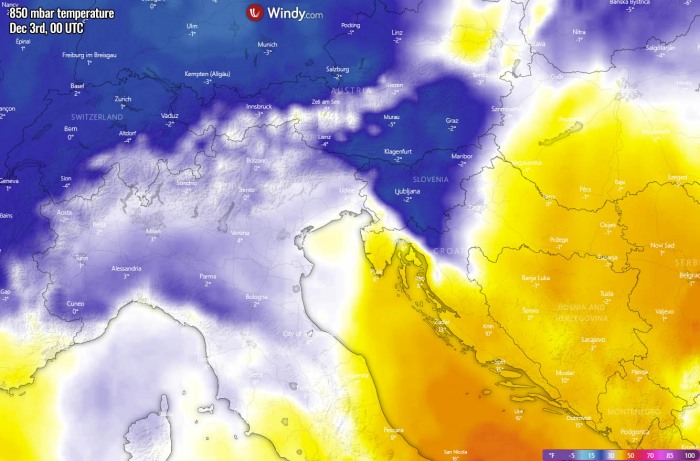 The weakening of the low will continue into Thursday, the warm advection will spread across the Balkan peninsula and further northeast. 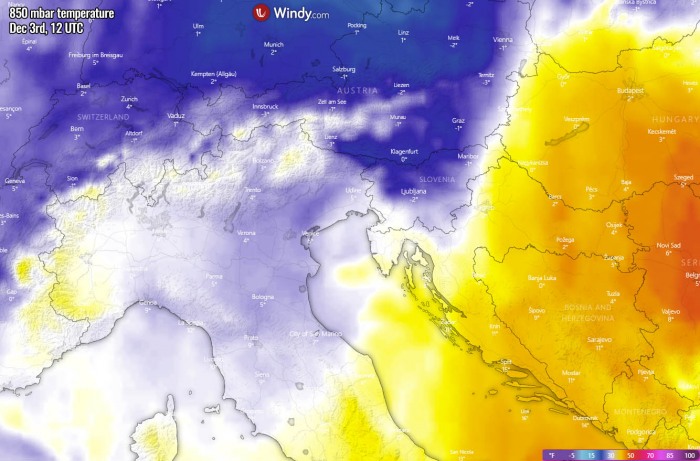 The below-freezing temperatures will support winter weather, so snowfall is forecast for many areas.

The classic pattern for a quite major snowstorm develops across the northern Mediterranean region and the northern Balkan peninsula through Wednesday and Thursday.

Attached below is the Windy.com forecast for the 3-day snowfall accumulation totals over the region during this snowstorm. The highest amounts of snow are expected across northern Croatia, a large part of Slovenia, the northern Apennines, and indeed over the Alps. 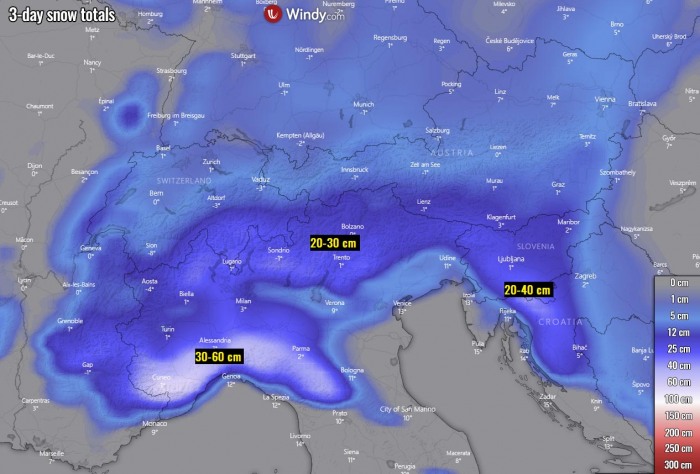 While there will also be some snow over the north Italian plains, northern Balkans, Austria, Swiss and southern Germany. But the expected amounts will not be too high. 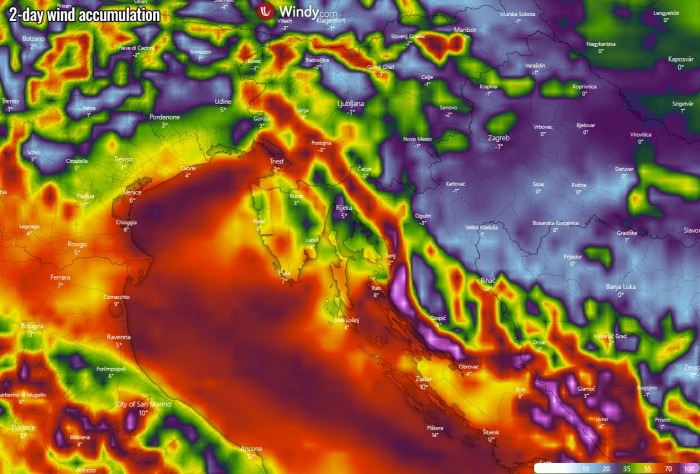 In addition to the heavy snow and high accumulation, increasing winds will lead to blizzard conditions and result in even stronger snowstorm effects. Especially across southwestern Slovenia and northwestern Croatia where powerful Bora downslope winds will develop.

Peak gusts will reach 100-140 km/h in the most exposed areas (e.g. Vipavska valley in Slovenia, Kvarner in Croatia).

Another particularly dangerous addition to the snowstorm will be the significant ice storm potential across parts of the northwestern Balkan peninsula. All the available weather models are hinting that a warming period is expected through Wednesday night as mid-level temperatures will be rising with a push of warm advection from the Mediterranean.

While very cold, below freezing temperatures will remain near the ground. This will establish near-ideal conditions for freezing rain event across southwestern Slovenia and northwestern Croatia. 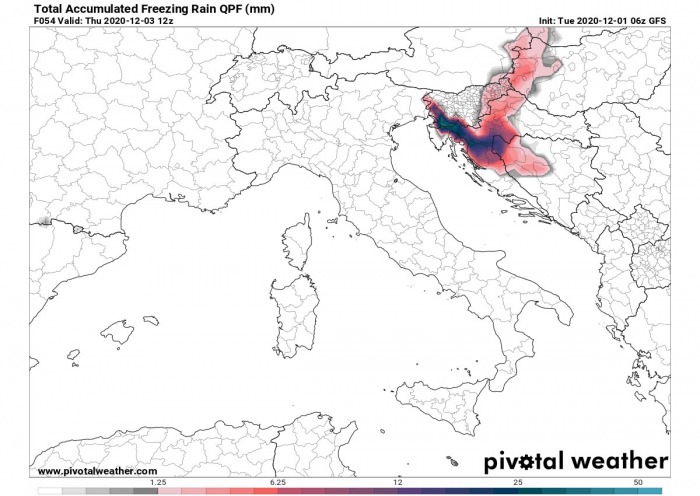 As we can see from the attached GFS model graphics above, the amount of freezing rain/ice accumulation could be 25-40 mm over the region. This means that ice thickness could accumulate up to 2-5 cm on the most exposed location.

The amount of ice thickness could be high especially along the east-northeast slopes of the mountain ranges where strong breezy winds will help the ice accumulation to grow faster.

A significant risk for black ice danger will develop on the roads!

Due to the snow being dry before the freezing rain, it will not accumulate on the trees, but the weight of the ice could become damaging for those!

EXCESSIVE RAINFALL FOR THE MEDITERRANEAN

The surface low over the northern Mediterranean will also develop excessive rainfall across parts of Italy and the western Balkans. While the low decays by Thursday afternoon, another depression is expected to enter the region towards the weekend and bring new precipitation into the region. 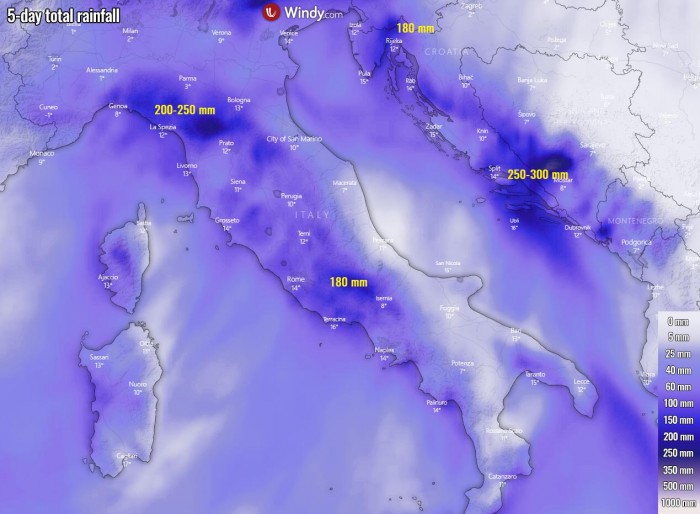 The situation will bring much warmer weather again, so it will be raining in most of the areas. And heavy snowing over the Alps.

The map above hints that central Italy could receive around 180 mm of rain, northern Apennines up to 250 mm (from both snow on Wednesday and then rain on Friday) and up to 300 mm over the central Dynaric Alps in the western Balkan peninsula (southern Croatia and western Bosnia).