It looks like much of Colorado will literally jump from hot summer to winter weather and snow – in barely just 36 hours! A very significant weather change will also bring heavy snowfall across Wyoming and Colorado, with a quite decent snow accumulation possible.

Planning a trip to Denver on these nice late summer days? Don’t forget your winter jacket! Seriously. Winter weather and snowfall are coming on Tuesday. You will literally change your summer clothes to winter ones. A powerful cold outbreak is a forecast to spread across a large part of the United States.

The western half of the United States is under a dangerous heatwave lately. There were numerous record-high temperatures set across the states of the West Coast this weekend.

The Colorado state is also experiencing record-setting high temperatures and a very hot Labor Day weekend this year. Another hot day comes on Monday. But then, a drastic change is forecast.

More than 35 °C (almost 70F) temperature drop is expected by Tuesday evening. In just 36 hours. Heavy snow is expected to spread from Wyoming into Colorado foothills.

Colorado is used to extreme changes

According to the National Weather Service from Boulder, Colorado, the earliest snowfall for the city of Denver was on Sept 3rd back in 1961. Nearly 11 cm (4.2 inches) has accumulated on that day.

Snowfall in Denver is not an unusual event for September. But it is rather rare to receive snow in early September, though. Snow this coming Tuesday will be the first time this has happened in September over the last 20 years.

Colorado plains are located to the immediate east of the high Rocky mountains, therefore dry downslope winds often bring very warm or even hot days in September or also October.

Those could quicky be replaced by winter weather and cold temperatures a day or even just a few hours later. There are a handful of notable events, similar to the one coming this week;

Notable events in the past

Further south, the city of Pueblo, Colorado has a record of 2 cm (0.8 inches) snow accumulation on Sept 27th back in 1996. If a snowfall occurs there, it will set a new record.

However, as forecaster Paul Schlatter of NWS Boulder noted: Going from a high of 90 or greater to accumulating snow the next day is extremely rare at either Denver or Boulder, but not unprecedented. The temperature change from the mid 90s to snowfall will be very rare, nevertheless.

A hot day again repeats on Sunday. Many areas across Colorado plains will experience 35-40 °C (95-105F) during peak hours in the afternoon. It will be even hotter across western Kansas, locally up to 42 °C (107F) is possible. 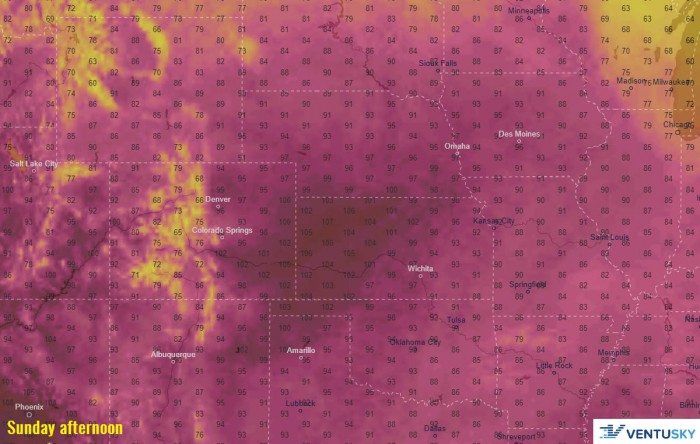 Another hot day across the central and High plains is also expected on Monday. A high-temperature contrast will develop when the very cold air mass enters the northern US from Canada.

Much colder weather will spread into Dakotas, Montana, and Wyoming. With more than 16 °C colder than normal 850 mbar temperature over Wyoming. 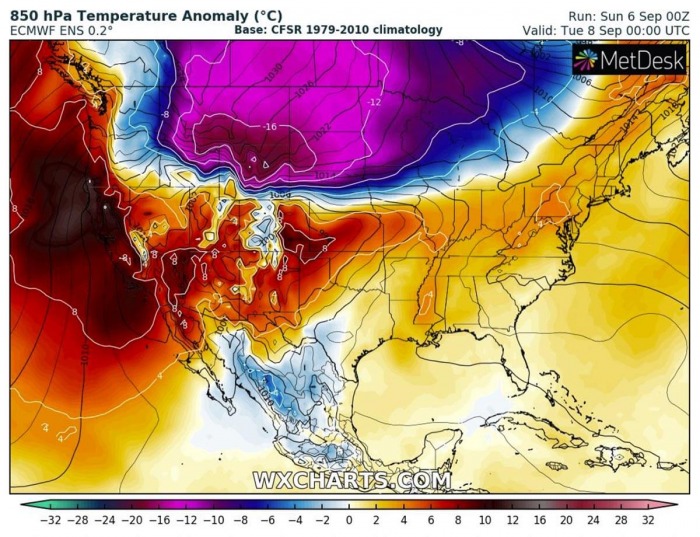 Temperatures should again climb into the upper 30s C (96-100F) across Colorado and Kansas. The arriving much colder weather is already seen further north. 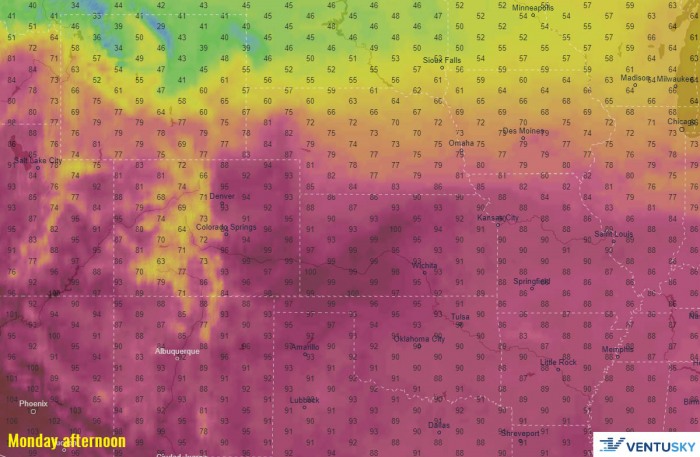 Tuesday will bring a drastic and extreme change in weather. A very strong cold front brings winter weather and *much* lower temperatures deep south into central and High plains. A large cold pool will rapidly spread towards Colorado and Kansas. 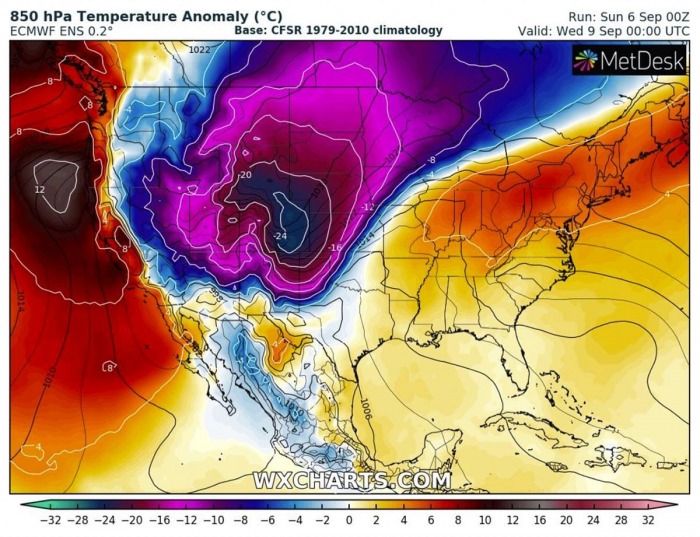 While the hot weather will maintain further south, temperatures are expected to push below zero C (32F) by Tuesday evening into Wednesday morning. 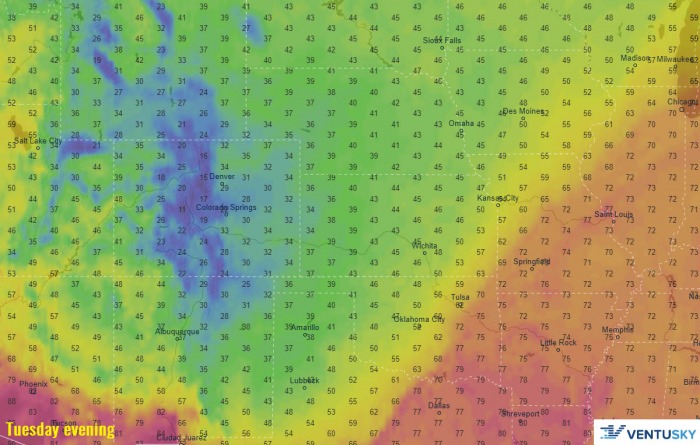 Very cold weather will continue through mid-week, gradually spreading towards the south into Oklahoma, Texas Panhandle, and New Mexico states.

According to the NWS Cheyenne, Wyoming, the “Cold Arctic air mass in the wake of the low will turn the area thermostat down quite considerably with record low temps possible Wednesday morning and widespread frost potential”.

The core of the cold pool with the lowest temperature anomalies will remain over Colorado. Snowfall will be occurring. 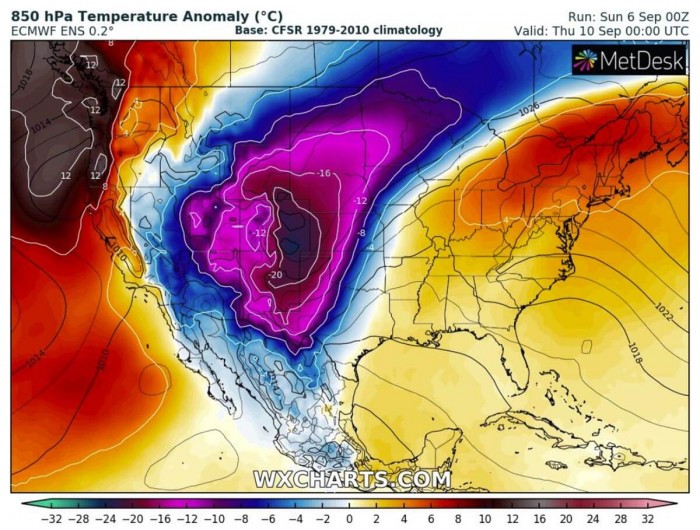 Attached is the animation of 850 mbar temperature anomaly, 2 m temperature and snow accumulation along the intense cold outbreak across the United States. Maps were produced by ECMWF model, source: Wxcharts.com.

Temperatures are expected to drop for more than 35 °C (almost 70F) in just 36 hours period – between Monday afternoon and Tuesday evening. The attached GFS model Meteogram cross-section chart reveals this obvious extreme temperature drop. From around 32 °C (90F) on Monday to around -5 °C (23F). 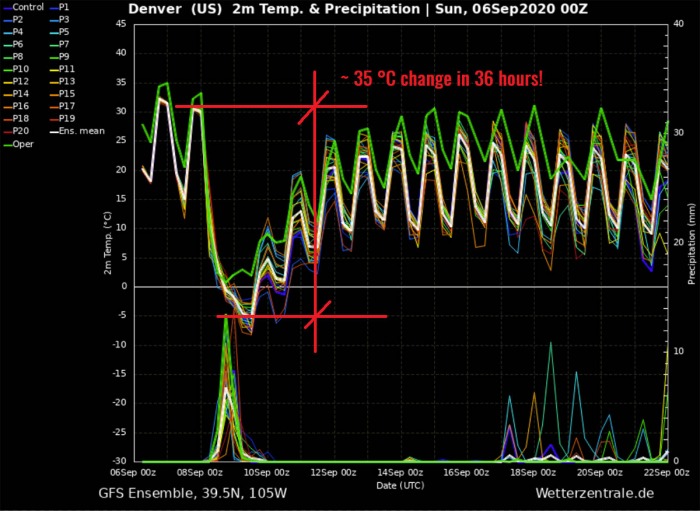 The bottom part of the chart is also hinting some precipitation, therefore snowfall is very likely to occur as well. Snow will cover the foothills and mountains while snow is also likely to be falling across the city of Denver. And some accumulation is possible.

The ECMWF model is the most aggressive with the snow amounts, potentially with 20-40 cm (10-15 inches) from Wyoming across Colorado foothills into northern New Mexico. 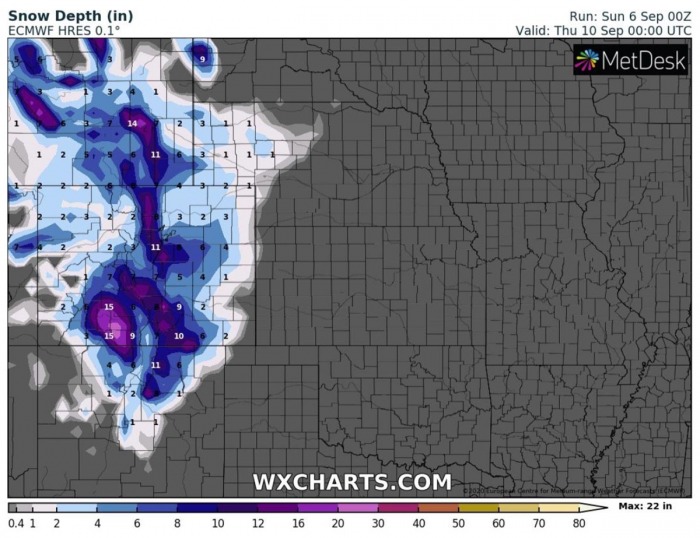 The GFS model is a bit less robust with high snow amounts but does a chance of snow also towards the Texas/Oklahoma Panhandle and also western Kansas. 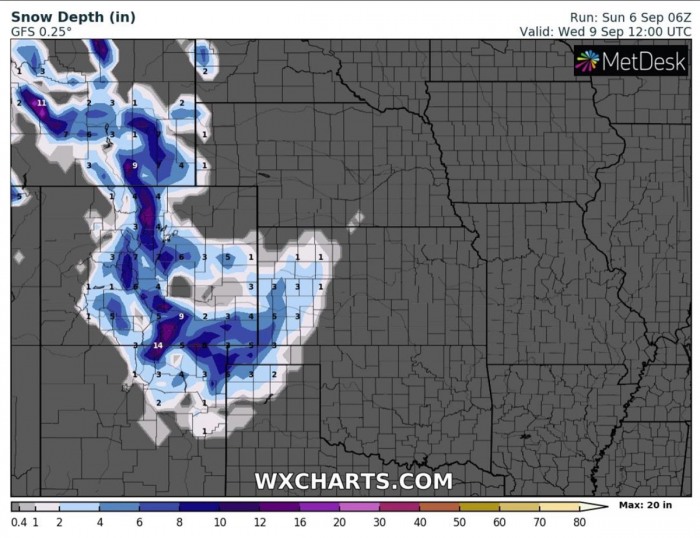 It is quite possible than snowfall will also spread further south across Colorado and reach New Mexico state as well. Higher elevations of these states surely will play a role. And indeed such a cold outbreak.

Overall potentially hints that 10-20 cm will be possible in the higher elevations, but also is some spots on the plains.

The cold pool will remain over the region for a few days, likely up until the next weekend. The coldest days are expected to be Wednesday and Thursday. Both with quite cold windchills for early September.

What is a cold wave/outbreak?

The end of summer 2020 and the early meteorological Fall season will introduce a very significant and locally a historic temperature change and early September snow. An intense cold outbreak spreads from Canada into the United States on Tuesday.

It will bring the first morning frosts and quite some fresh snow over the High Plains from Wyoming, across Colorado to New Mexico.