Haishen remains a violent typhoon and heading towards Korea. It is blasting across the Kyushu islands with destructive winds, storm surge, and torrential rainfall. Its next impact is a damaging landfall near Busan, South Korea over the next 12 hours. Flooding and damaging winds will spread across a large part of the Korean peninsula and northeast China until Tuesday.

Typhoon Haishen is maintaining its violent strength while moving along the western portions of Japan’s Kyushu island. Destructive winds, storm surge, and flooding are underway.

Haishen hit the Ryukyu Islands earlier on Sunday, leaving severe damage and thousands without power. It is now expected to continue on its way north-northwest and make landfall in the Korean Peninsula on Monday morning.

Typhoon Haishen has a large eye, which is very well-visible on both satellite and radar imagery. Radar scan taken in the early Monday morning reveals the center was located along the western portions of Kyushu island. The eastern eyewall was grazing the island. 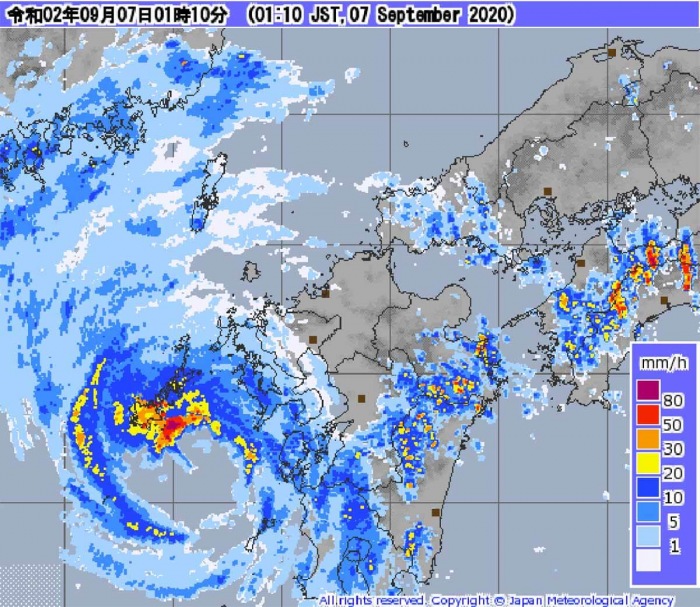 The satellite presentation of Haishen indicates that it likely went through an eyewall replacement cycle (EWRC) on Sunday into Sunday night, but the structure has been able to maintain a compact system. 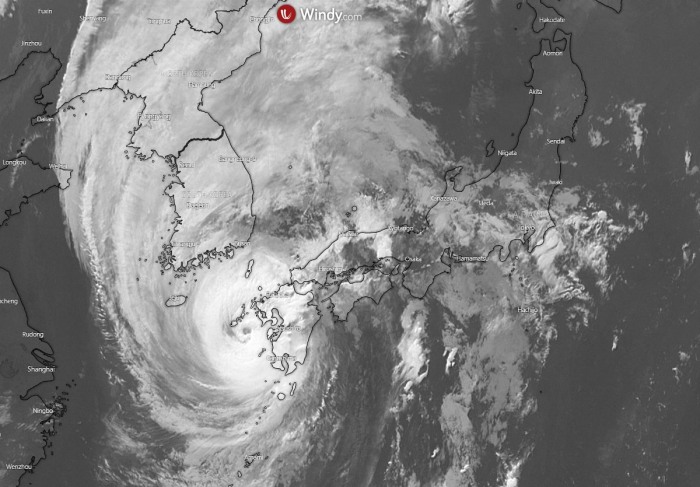 Attached is the ASCAT satellite pass over Haishen, located south of Korea on Sunday. The analysis is showing the large wind field of typhoon Haishen as it passes west of the Kyushu island. 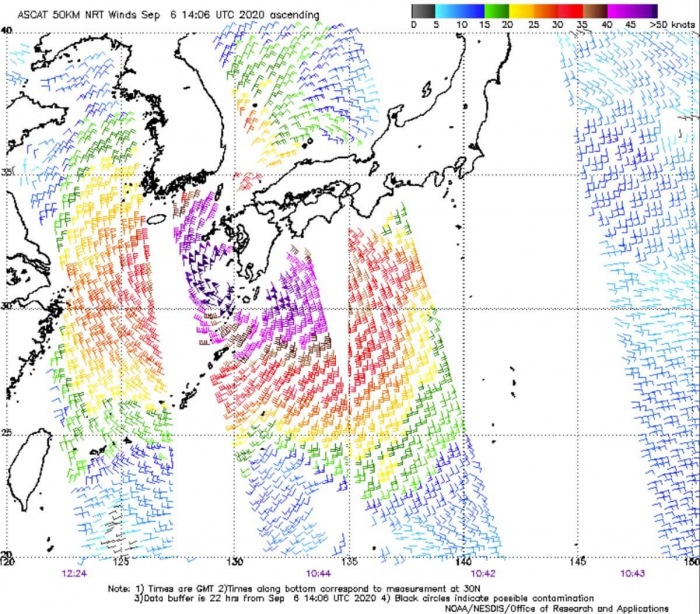 Advanced Dvorak Technique (ADT) estimates are indicating that Haishen’s tropical-storm-force 50-knot winds are spread across the 75-90 miles radii around the center. Haishen also has 40-55 miles radii of hurricane-force 64-knot winds.

Hurricane-force winds are grazing the western portions of Kyushu island, Japan. The minimum central pressure is around 940 mbar. 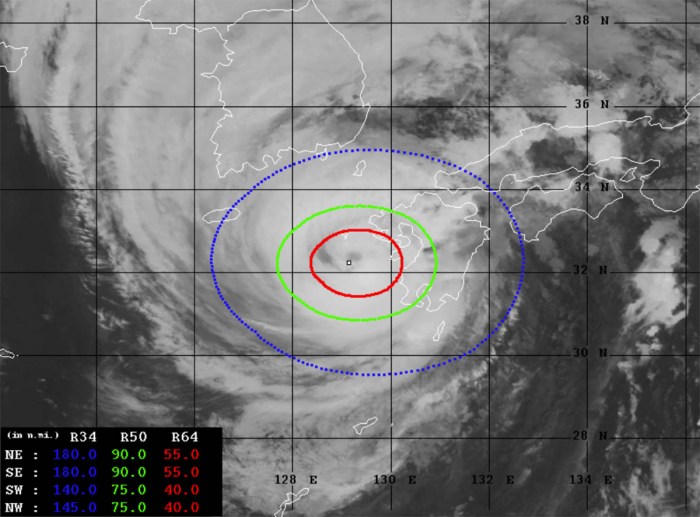 While Haishen is now nearing Korea, it is in a gradually weakening trend. However, it remains a very powerful and large typhoon of a strong Category 2 strength. The peak intensity of 135 knots (155 mph) was on Friday. 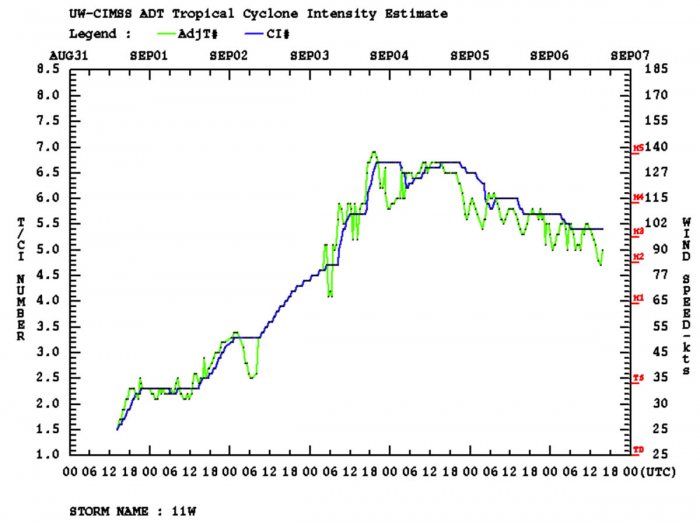 Haishen is expected to continue moving north-northwest with an accelerating speed tonight. It is heading for a destructive landfall near the city of Busan, South Korea in the early Monday morning (local time).

Remember, the area was devastated just a few days ago when typhoon Maysak made landfall west of Busan.

The landfall of Haishen in Korea will be severe. JTWC forecast suggests the landfall winds could be around 75 knots (85 mph = 140 km/h). Therefore, potentially as a solid high-end Category 1 or even a Category 2 typhoon strength. 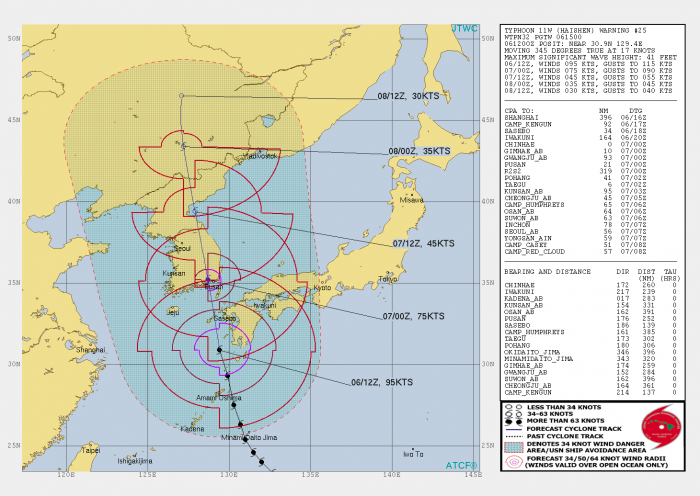 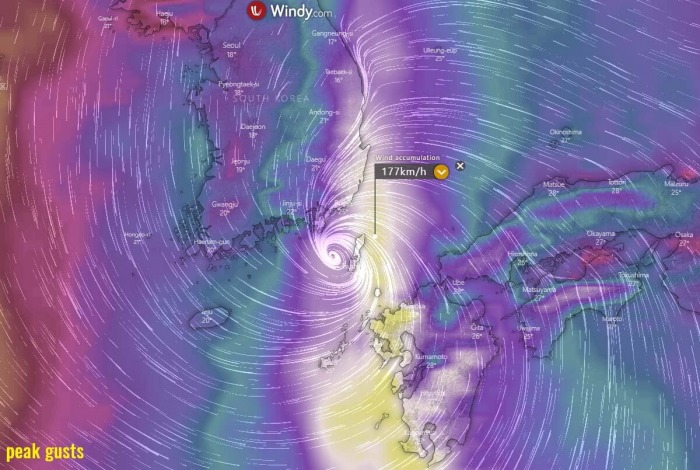 A huge amount of rainfall and destructive flooding threat remains in effect for the eastern portions of South Korea. Deep convective storms will be fueling with the advection of very hot and humid air mass from the East Sea (Sea of Japan) to its east.

The center of Haishen will be traveling across the eastern Korean peninsula on Monday and reach China on Tuesday. 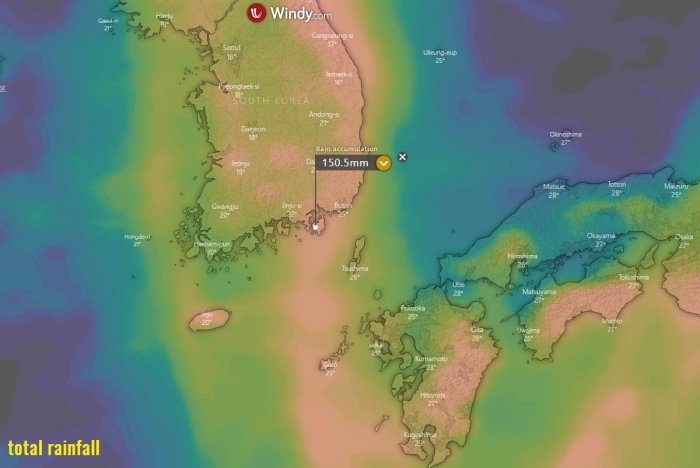 Attached is the animation of the typhoon Haishen, moving across Kyushu island and on its way towards South Korea landfall on Monday. Maps were produced by the GFS model, source: Wxcharts.com.

Once the core of Haishen is over North Korea, major rainfall and flooding threat develop there as well. High rainfall sums in excess of 200 mm are likely across east-northeast North Korea. 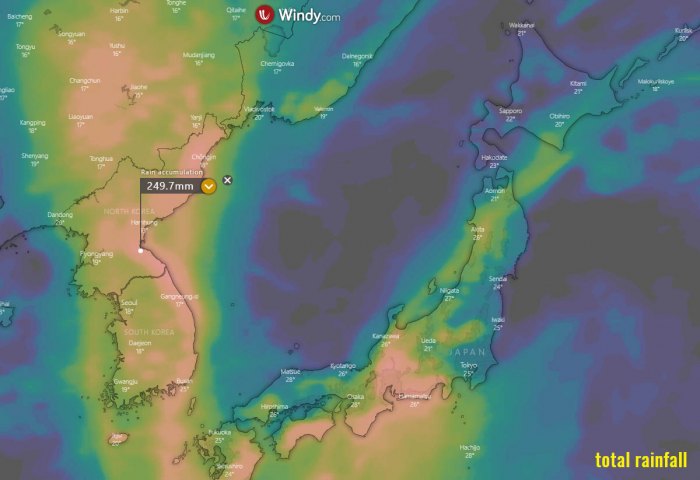 Lots of rain is also likely to further north into eastern China. Destructive flooding could occur.

Historic landfall in the Korean peninsula

After Haishen makes landfall in Korea, this will become a historic and record-breaking event. There was no season over the last 75 years that has seen three typhoons making landfall anywhere on the Korean peninsula.

The sea surface temperatures south of Japan are the highest ever observed since the records began in the year 1982. Temperatures are roughly 2 degrees Celsius (4F) higher than normal there. 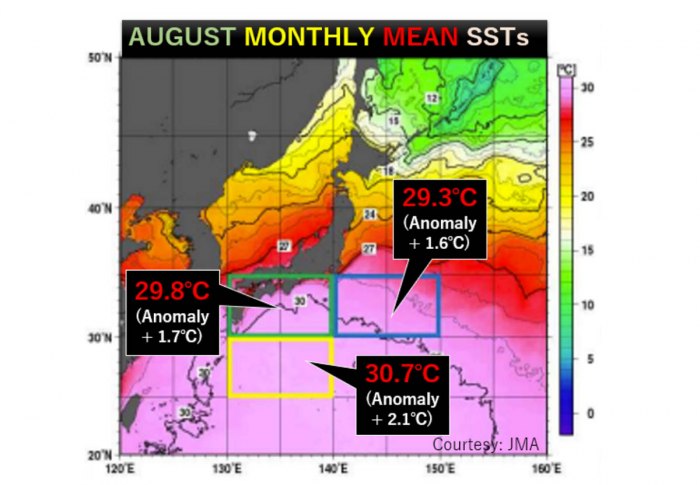 The above graphics by Japan Meteorological Agency (JMA) indicates that the average temperature of the sea just south of Japan has been at 29.8 °C through August. About 1.7 °C above the long-term average.

Even warmer, 2.1 °C above the average, were the temperatures further south. Directly in the area (between 130-140° E and 25-30° N) where Haishen was tracking this weekend, towards Japan islands.

This is the main reason why typhoon Haishen has literally exploded in intensity on Thursday and peaked on Friday. Being within a very low shear environment, oceanic conditions lead to very rapid intensification.

Very warm to hot sea surface temperatures of above 26 °C, high atmospheric instability, and high humidity in the lower to middle levels of the troposphere are the most important ingredients that lead to tropical cyclogenesis.

The final ingredient is environmental support, the upper-level divergence. This is a very important factor as it is supporting the upward motion for deep convective storms to develop.

At the surface, a pre-existing low-level wave or disturbance develops and moving through an environment with low vertical wind shear.

Typhoons often have very high cloud tops, even below -85 °C or -90 °C at times. There is a rough estimation – the higher the cloud tops, the colder and the stronger tropical cyclones are. 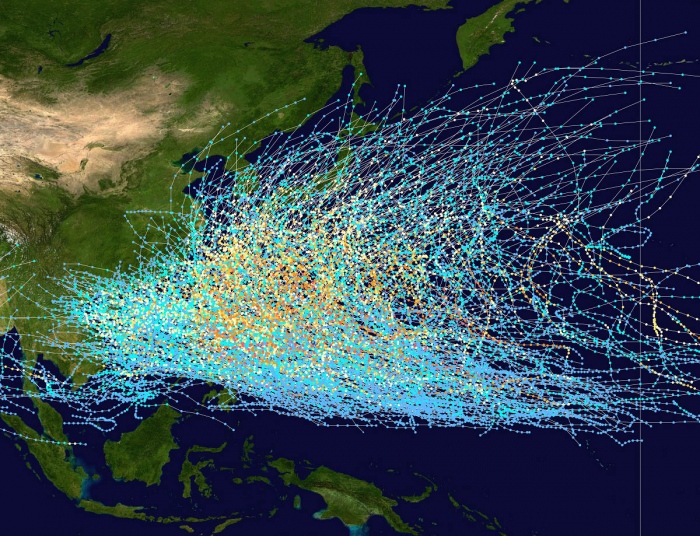 There are some rare events than a tropical cyclone formed east of the 180° East longitude, over the central Pacific, as a tropical storm or a hurricane. When it travels westward into the western Pacific, it continues as a typhoon.

Typhoon Haishen will remain a very intense system until it makes landfall near Busan, Sout Korea on Monday morning. The destructive force will bring severe wind damage, flooding, and major storm surge in the south-southeast parts of the peninsula.

While Haishen tracks further north across the peninsula, dangerous flooding is also expected in the eastern parts of North Korea on late Monday.

Haishen is expected to be one of the most intense storms to hit Japan on record.

With another typhoon making landfall in Korea, Haishen will become a historic and record-breaking event. As over the last 75 years, there was no season with three typhoons making landfall anywhere on the Korean peninsula.