Severe storms with large hail, severe winds, and torrential rainfall are possible from northern Italy towards Poland and also over the eastern Black Sea region and Tunisia on Sunday. Supercells will be possible as well. 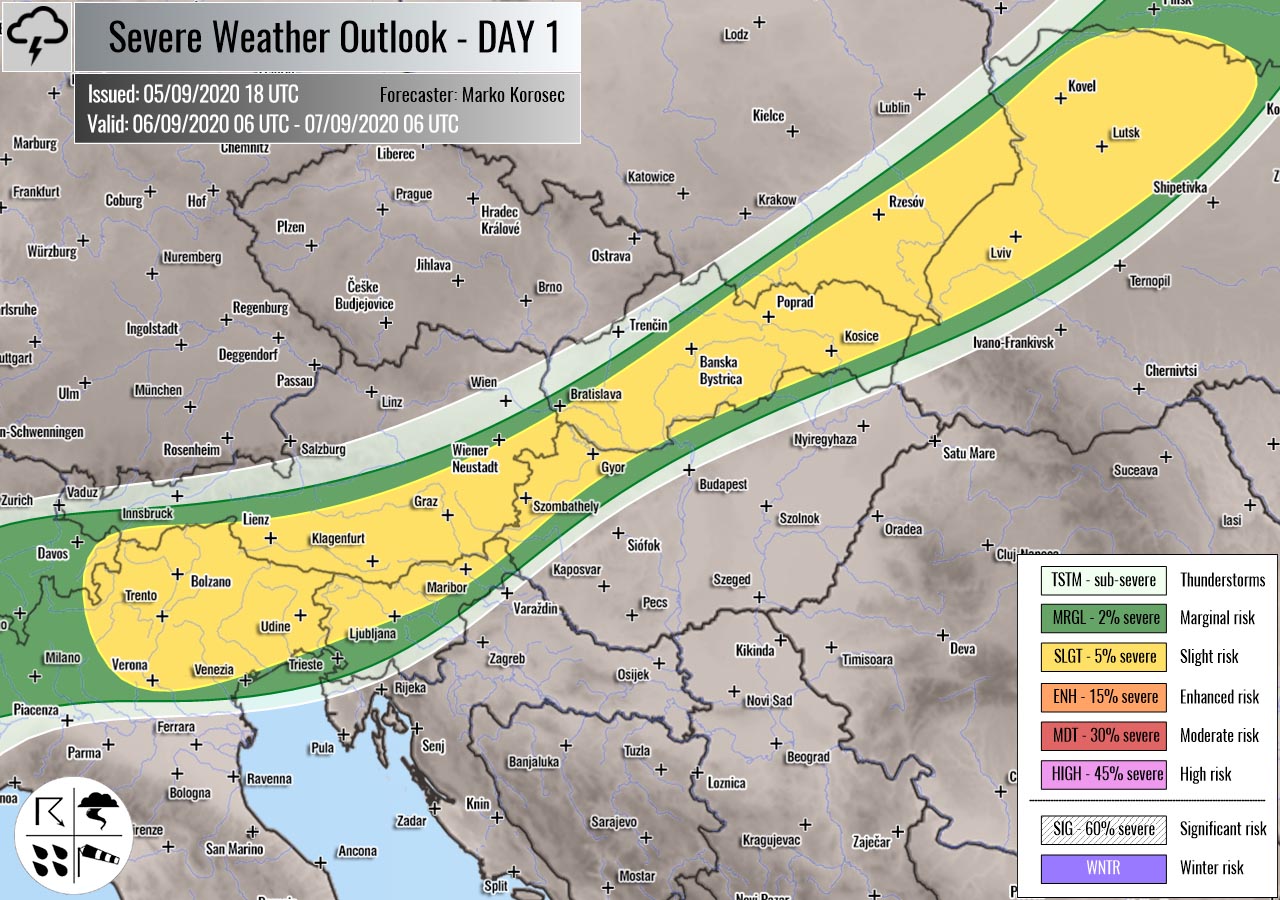 SLGT/MRGL risk has been issued for northern Italy across southern Austria and northern Slovenia into northern Hungary, Slovakia, southeast Poland, northwestern Ukraine, and Belarus with a threat for severe storms, capable of producing severe winds, torrential rainfall, and large hail.

Scattered organized storms are expected along the moving cold front across central and eastern Europe. Moderate shear coupled with weak to moderate instability should support isolated to scattered storms. Some of those could be supercells.

The strongest storms should bring severe winds and large hail threats. Storms will gradually continue east-northeast during the afternoon hours and could merge into a larger cluster in the nighttime. 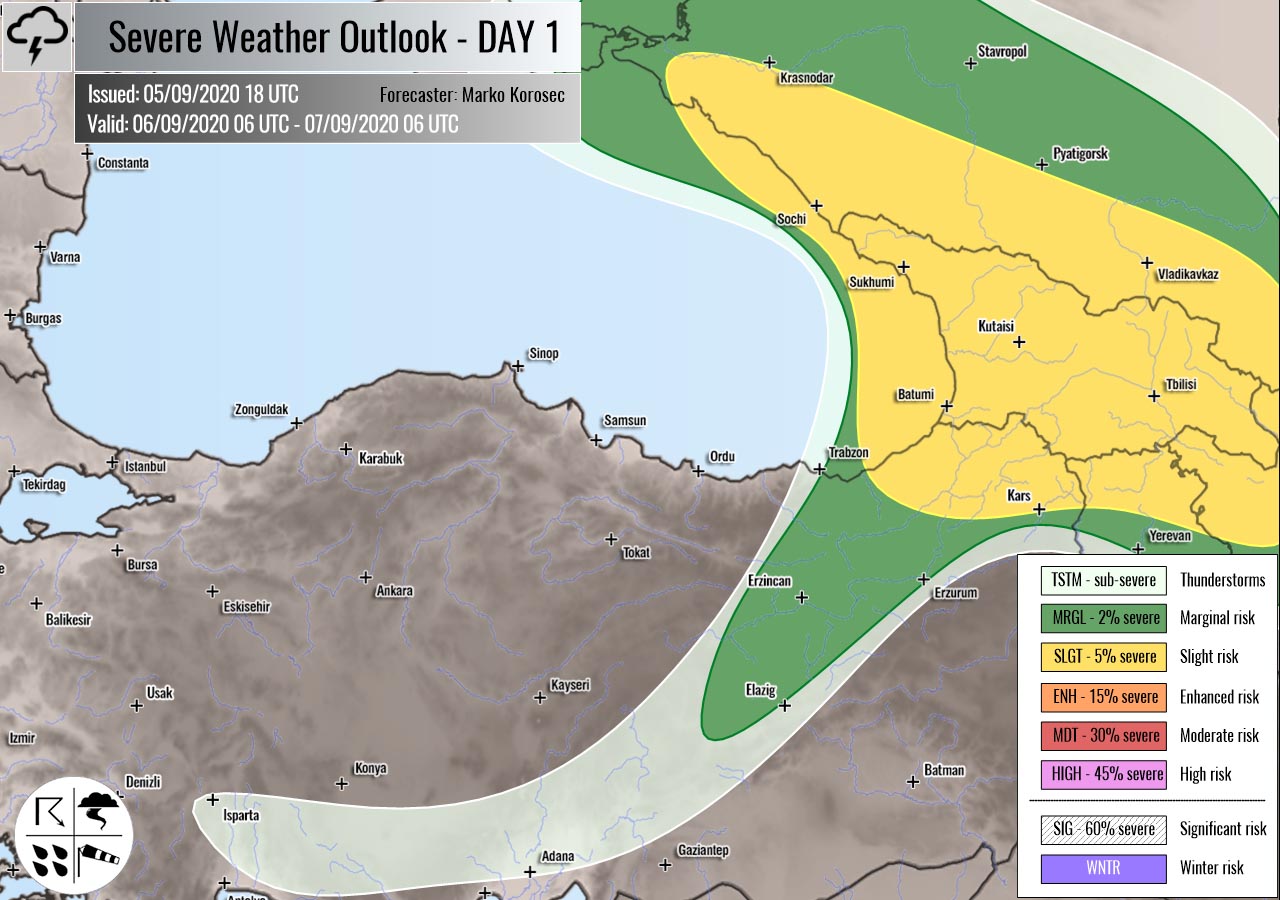 SLGT risk has been issued for the eastern Black Sea, southwestern Russia, Georgia, eastern Turkey, and Armenia with a threat for severe storms, capable of producing severe winds, torrential/excessive rainfall, and marginal hail.

Another day under a decaying upper low will result in a rather widespread convective activity. Slow-moving storms are likely, so excessive rainfall threat will develop, posing threat for flooding. Moderate shear and instability should also support a supercell or two with large hail and severe winds threat. 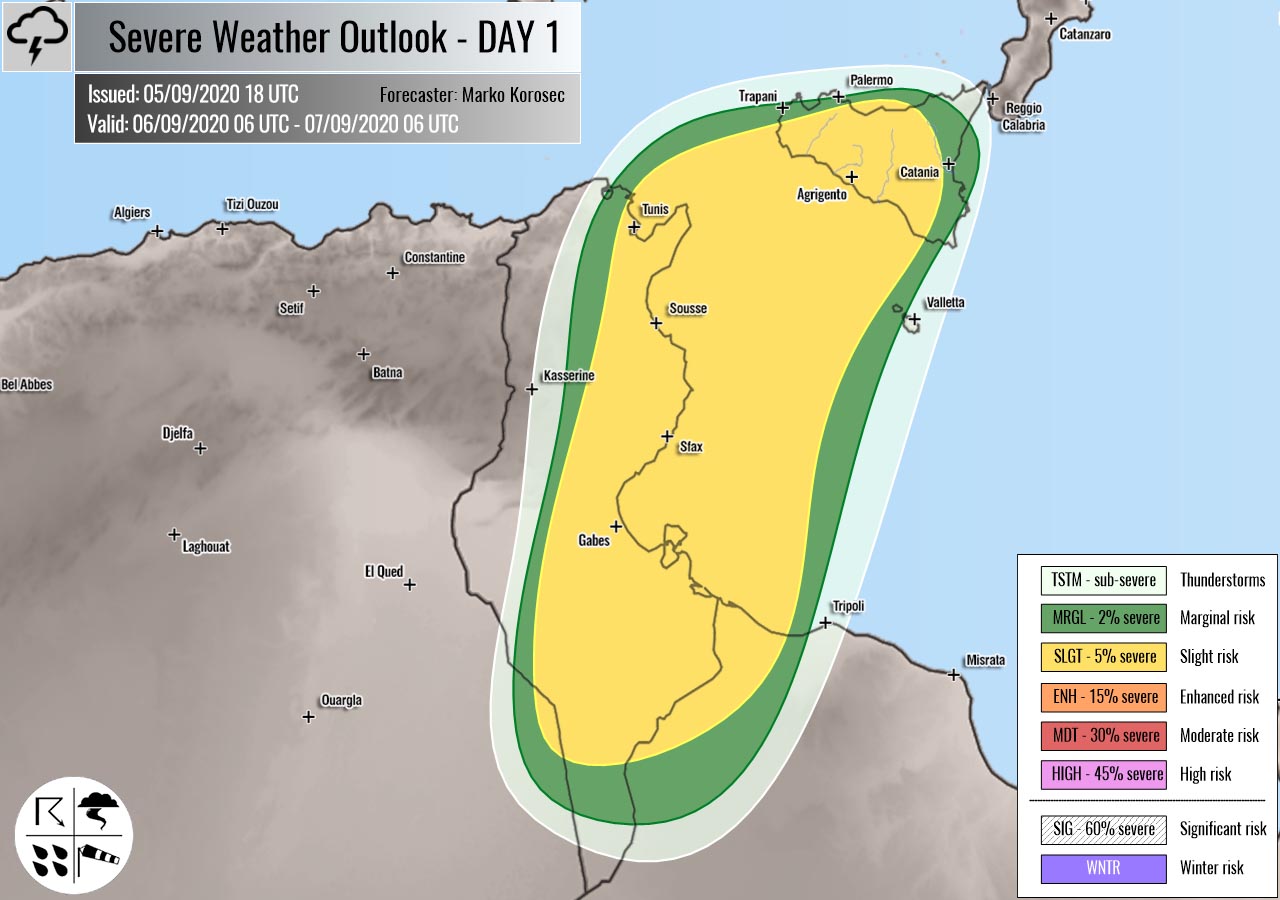 SLGT risk has been issued for Tunisia into Sicily with a threat for isolated severe storms, capable of producing severe winds, torrential rainfall, and large hail.

Convective activity will be associated with the weak upper low, so a rather widespread activity is possible. A few supercells could form, posing threat for large hail and severe winds under a strongly unstable and moderately sheared environment.

MRGL risk has been issued for northeast Spain into the northwestern Mediterranean with a threat for isolated severe storms, capable of producing severe winds, torrential rainfall, and large hail.

A few isolated storms could form near the upper wave entering from the north, under a weakly unstable environment and moderate shear.

TSTM risks have been issued for Morocco, southern Turkey, and part of Scandinavia with a threat for daytime driven storms. Limited shear is present, so the storms should remain sub-severe.

Share on TwitterShare on RedditShare on FacebookShare on PinterestShare on WhatsApp
SWE Photography Contest week #33 of 2020 (Aug 10th – Aug 16th) Winners
← Previous
The new forecast for Colorado: a drastic 36-hour change from summer on Labor Day to heavy snow on Tuesday
Next →
Comments are closed.