Days are getting shorter, and the temperatures over the Northern Hemisphere are slowly dropping. Global weather systems are evolving into proper Fall weather patterns, as seen on the 10-15 day forecast trends. A colder air system is expected to drop into the northeastern United States and into Europe a few days earlier.

The current pattern is aimed at progression. We see a positive NAO pattern over the Atlantic, extending the calmer autumn weather into northern and Central Europe. A deep trough sits over eastern Canada, extending down into the eastern United States. Take note of the Hurricane Teddy in the Atlantic, as it starts to curve towards the north, around the high-pressure area. 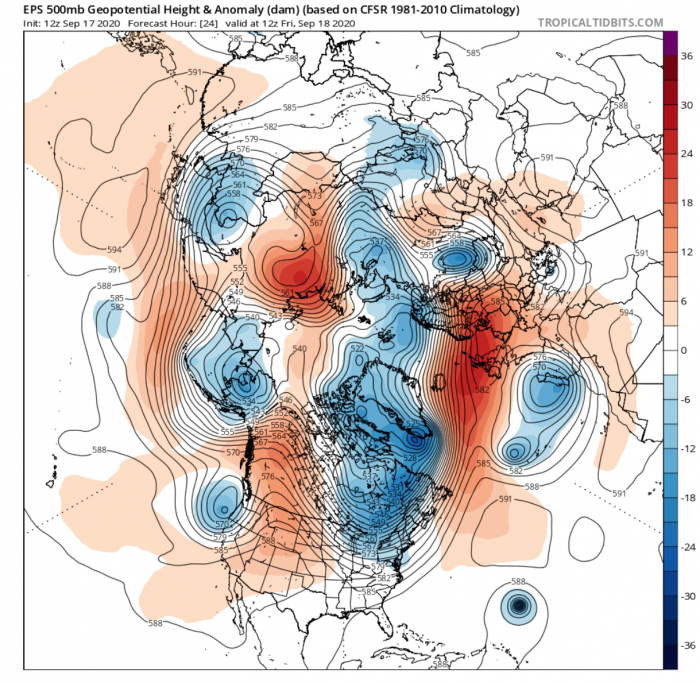 The temperature anomalies reveal a dipole pattern over the United States. We have unusually warm air mass rising in the western parts into Canada, while the eastern parts feature a northerly flow and colder than normal temperatures.

Most of northern and central Europe are experiencing warmer than normal autumn conditions. The high-pressure system has brought the so-called “Indian Summer” to most of Europe this month. 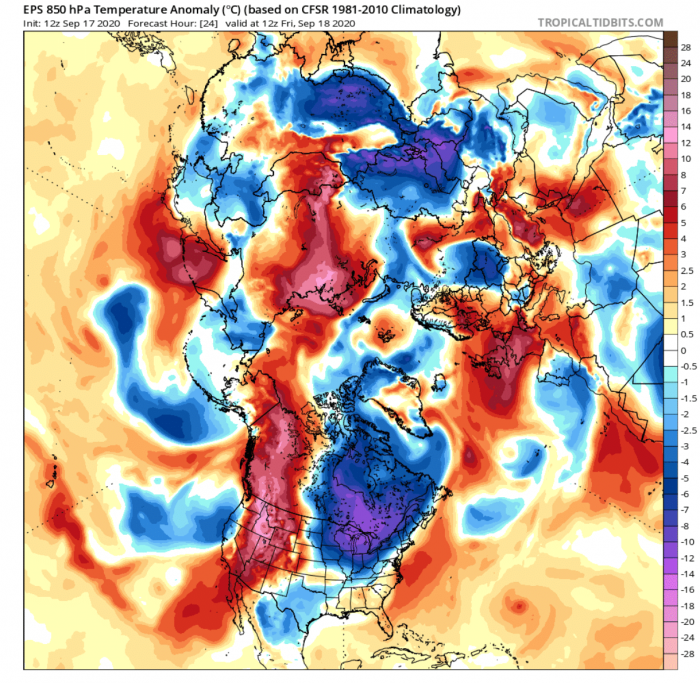 But a lot will change in just 4-5 days time. Now we can see hurricane Teddy landfalling into the northeast United States or east Canada (not exactly determined yet), with expanded influence along the east coast.

An expanded high-pressure system overtakes most of the United States and the Canadian sector. In relation to this high pressure, a strong low-pressure area is strengthening in tandem over the far North Atlantic and the Arctic Circle. This will temporarily change the entire European weather pattern as it evolves, ending the Indian Summer period. 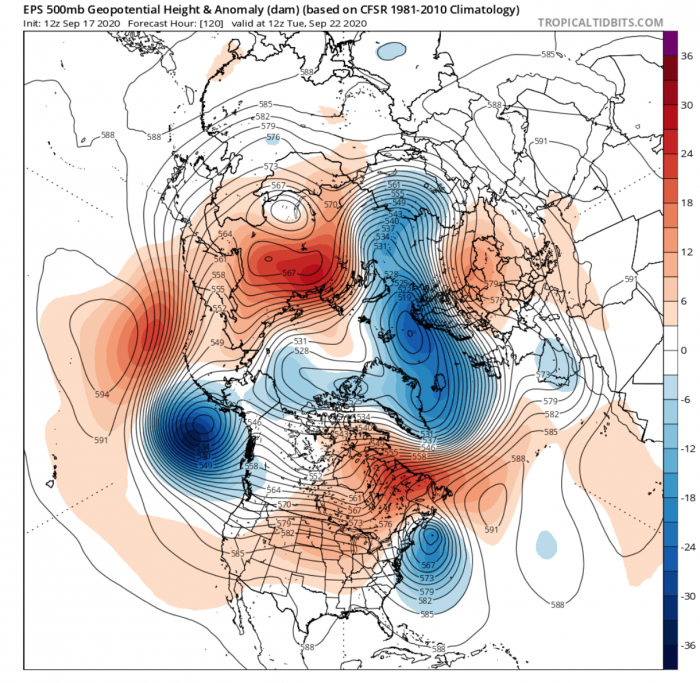 The temperature anomalies reveal a vast cold airmass gathering over Greenland and the North Atlantic. This will be pushed directly into Europe by the northerly flow on the low-pressure area we mentioned on the corresponding pressure pattern above. Warmer temperatures over mainland Europe temporarily move further east. 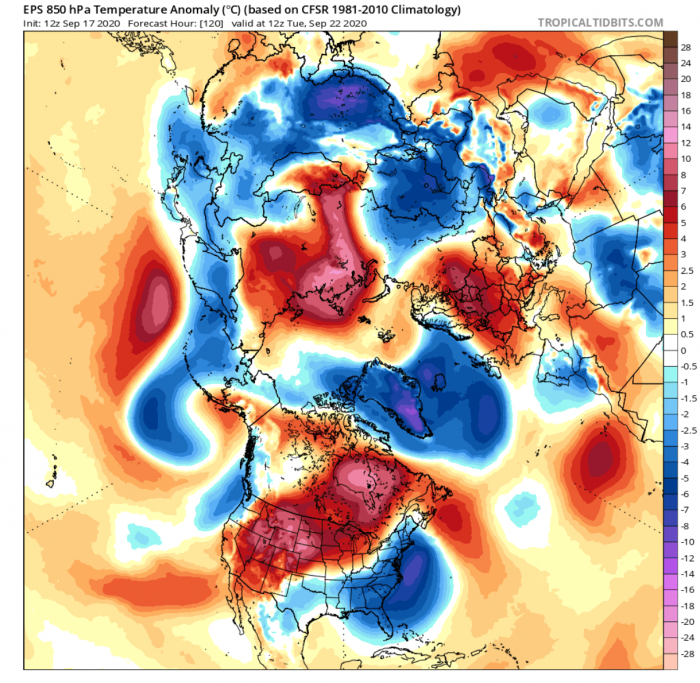 By next weekend, the pattern will progress further. The low-pressure system from the far North Atlantic will drop into mainland Europe. That will amplify warm air transport on its eastern side, building a strong ridge over eastern Europe and western Russia, extending it far north into the Arctic Circle.

Over the central United States and Canada, the high-pressure area stalls, creating warmer conditions. The low-pressure area associated with the outgoing remnants of what was once hurricane Teddy moves further east out into the Atlantic. Eastern Canada and far northeast United States could still feel the influence of the nearby system in more unsettled weather. Worth noting is the low-pressure system over Alaska, which will help to build the ridge into the western United States. 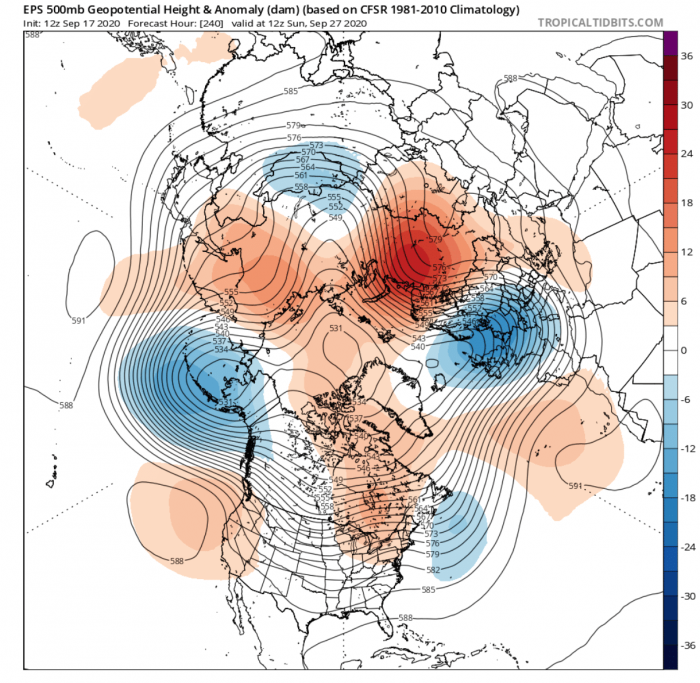 Temperature anomalies reveal the colder than normal airmass over Europe, behind a sharp cold front. Strong warm anomalies are building over western Russia, extending towards the north under the high-pressure area.

Most of North America is experiencing warmer than normal weather for this time of year, under the temporary influence of the high-pressure system. 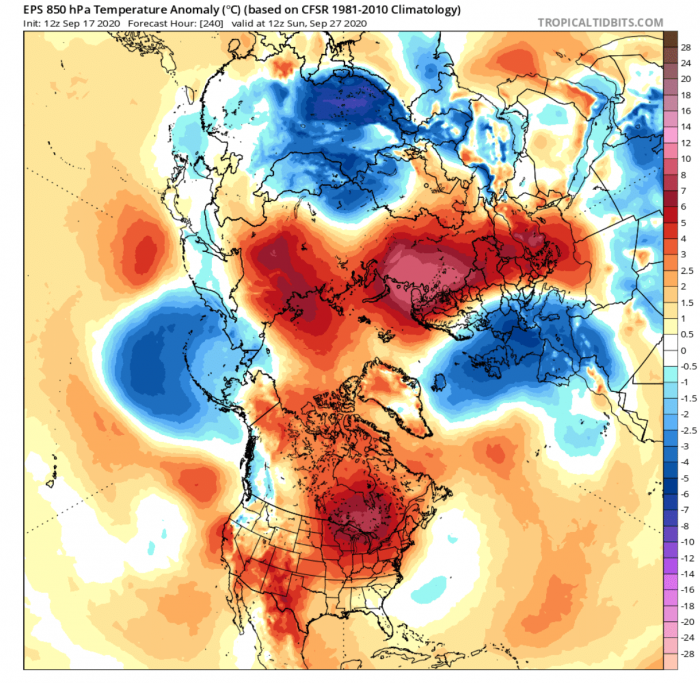 Looking closer at Europe, we can see a quite strong dipole pattern for this time of year, with a strong cold front sweeping across the British Isles, into western and Central Europe. A strong warm wave builds further east, as the south winds quickly transport warmer air mass towards the north. 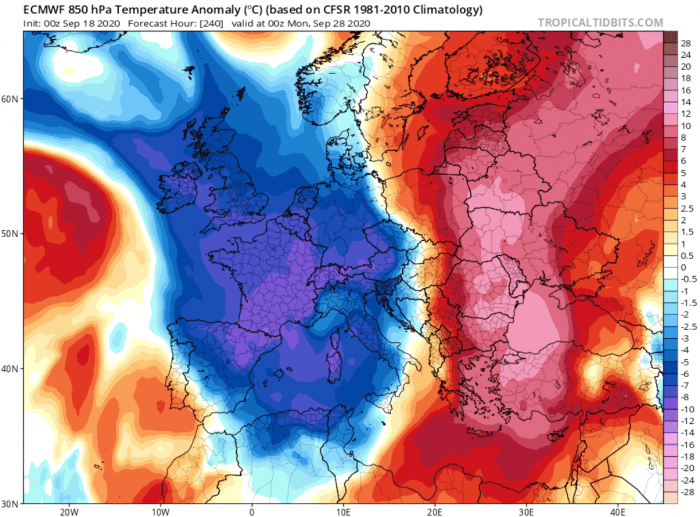 In the final days of September, the pattern will be stagnant over Europe, as a low-high pressure tandem remains coupled over the Euro-Russian sector. A blocking ridge is further developing over Western Russia, which could “lock” this type of a pattern over Europe in the entire 10-15 day forecast period, preventing the return of the Indian Summer for the time being.

But systems are slowly starting to move over North America. The ridge over the western United States starts rising further north, boosted by the Aleutian low. This promotes the upper northern flow over central Canada and down into the United States. 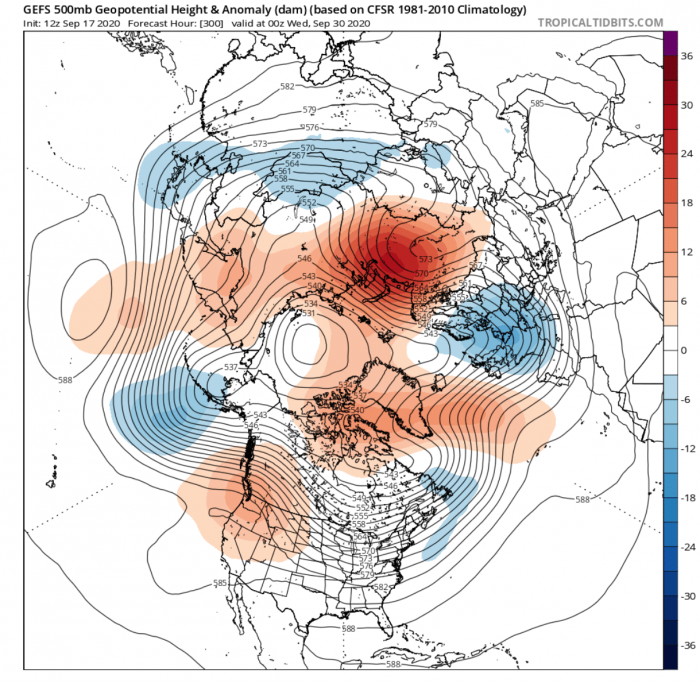 The temperature anomalies reveal the colder than normal air remaining over Europe, locked by the dipole pressure pattern from the blocking high over Western Russia.

We don’t see any colder airmass transport over Canada and the USA yet, but the strong warm anomalies will slowly start to weaken in the central regions and east. 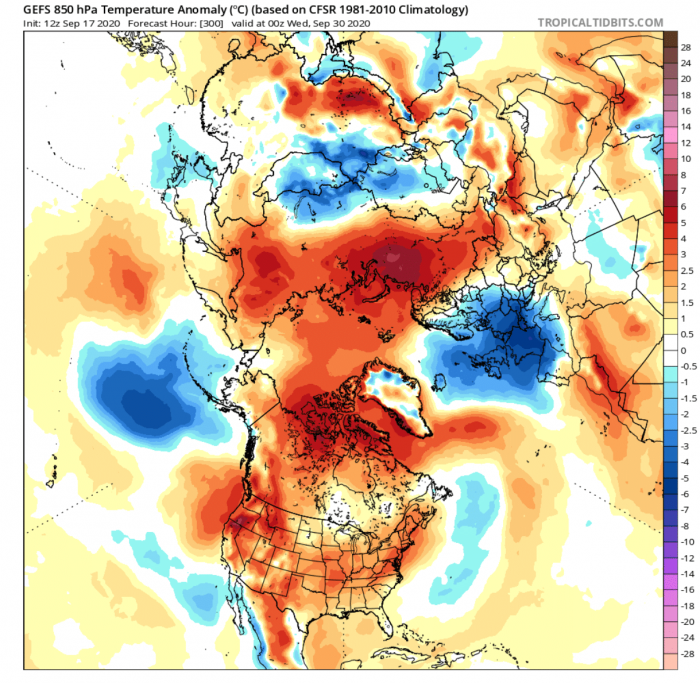 The first days of October will still feature the blocked flow pattern over the Euro/Russian sector. This will continue the rather unsettled weather over mainland Europe, specifically over central and southeastern parts. 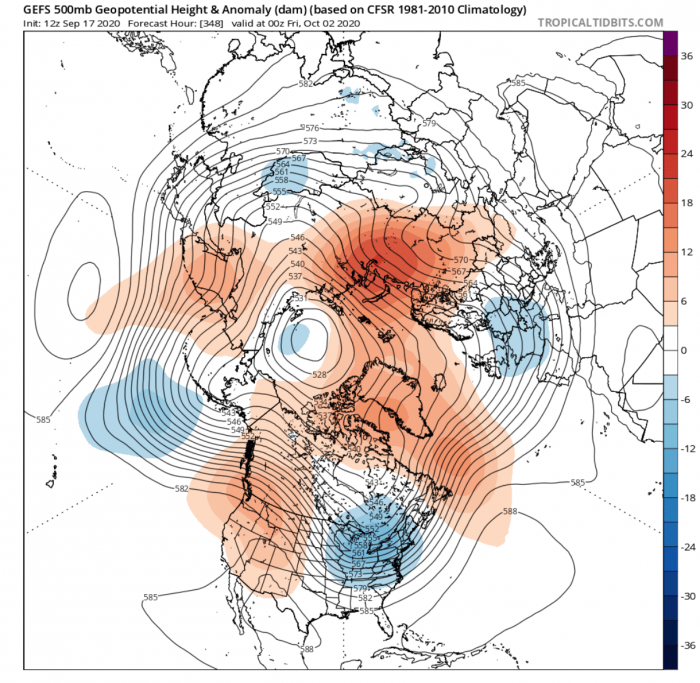 The colder than normal airmass slowly starts to warm up over mainland Europe and the British Isles. These conditions are still far from the warmer Indian Summer we experienced in the current mid-September days.

Active colder than normal air transport also initiates with the northerly flow from Canada into north-central and the eastern United States. The actual airmass is not frosty cold but brings a period of unsettled weather with cooler temperatures and precipitation. 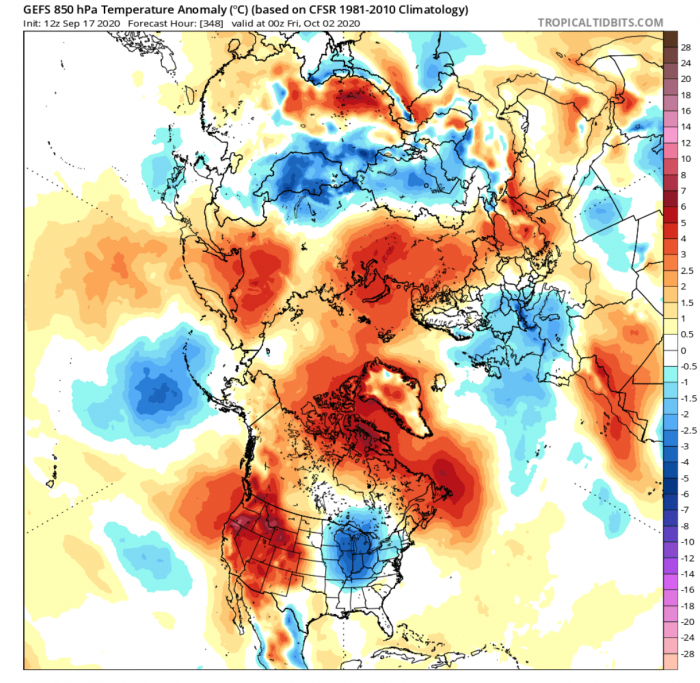 The end of the 10-15 day forecast period will feature the gradual building of a ridge in the North Atlantic, extending further north. This corresponds to the neutral to negative North Atlantic Oscillation pattern. That means the low-pressure area will continue to dominate the European sector. It translates to more unsettled weather over mainland Europe, and alternating drier and stormy conditions over the British Isles, depending on the positioning of the High-pressure system in the Atlantic.

North America will experience the expansion of the high-pressure area from the western United States and Canada towards central regions. Drier and calmer conditions will generally prevail under the expanding high-pressure area. Eastern parts will be more dynamic/unsettled, as the Low-pressure systems persist in the dipole pattern. 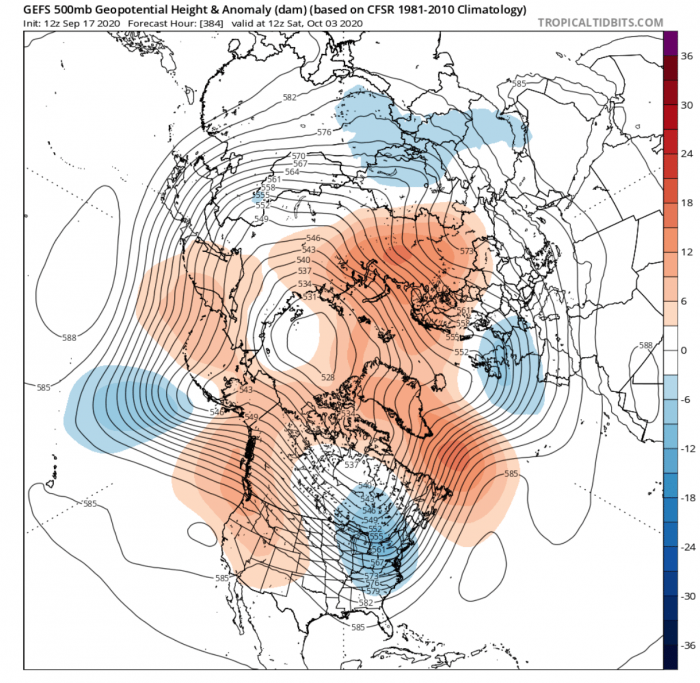 Cooler airmass stagnates over most of central and western Europe, now also featuring more of the Atlantic airmass in the mix. This means an additional source of moisture, clouds, and precipitation waves.

The colder than normal airmass also persists over the eastern United States. This usually means cooler conditions in early October, depending on the source of the airmass. Western parts are experiencing the continuation of warmer conditions, with the drier conditions also continuing for the southwestern United States, prolonging the wildfire crisis. 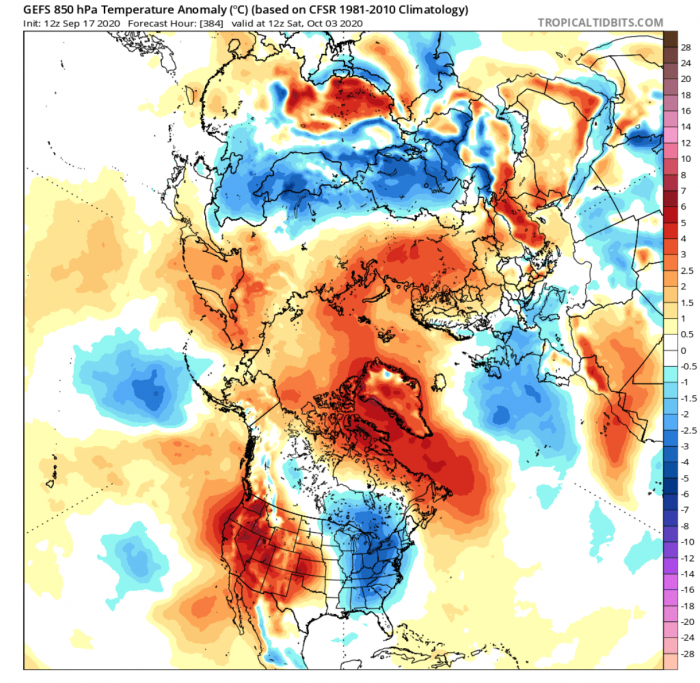 Ensemble images below show the 850mb  (~1.500m) temperature forecast progression. The sharp cold front is nicely seen on the first image for Manchester, UK, and the persistence of the colder airmass. Towards the end, temperatures slowly trend back up, as the Atlantic airmass is taking over. 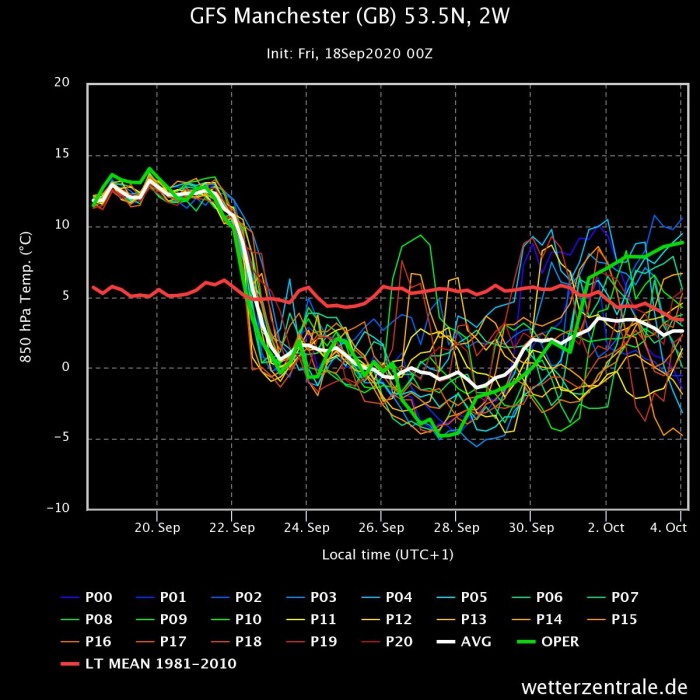 In the USA Midwest region, we can see the airmass progression, as the colder air moves out, and is replaced by the very warm airmass as the high-pressure expands. It is then followed by a trending drop in temperatures, with the northerly flow and the return of cooler airmass from the north. 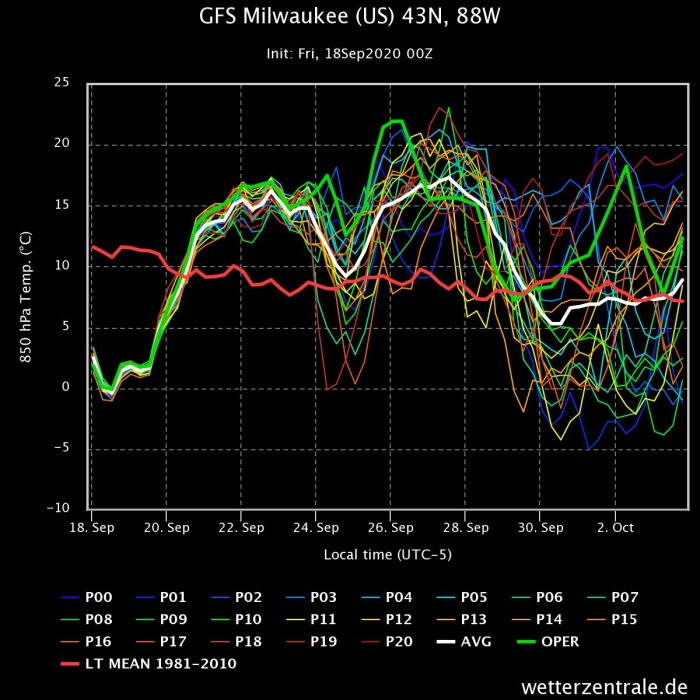 The high-resolution animation shows the movement and transport of the colder air from the northern regions, with the cooling over Europe and the cooler air transport into eastern Canada and the United States.

The changing patterns are seen on the Image below by NOAA/PSL. We see the NAO (North Atlantic Oscillation) and PNA (Pacific North American pattern) index forecast. NAO transitions from more positive to more neutral to negative, while the PNA has a burst of the positive phase.

Europe is directly influenced by the NAO, which in the negative phase means lower pressure over the mainland, along with unsettled and cooler weather. This is the desired pattern for every European winter fan during the winter season.

North America is just as directly affected by the PNA, which in the positive phase corresponds to the high pressure over western North America and lower pressure over the eastern parts. That is exactly what we are observing on the 10-15 day forecast trends. This is also the desired pattern for winter fans in the eastern United States.

On the Image below, the weekly forecast from the CFSv2 model shows the continuation of the positive PNA pattern over North America n October, with the dominant high pressure in the west and low pressure in the east.

Over Europe, the low-pressure area is expected to slowly lift further north, as the Atlantic high-pressure system retracts further west. This means more zonal and warmer conditions will return to mainland Europe. But the period of unsettled weather and more frequent storms could begin for the British Isles. 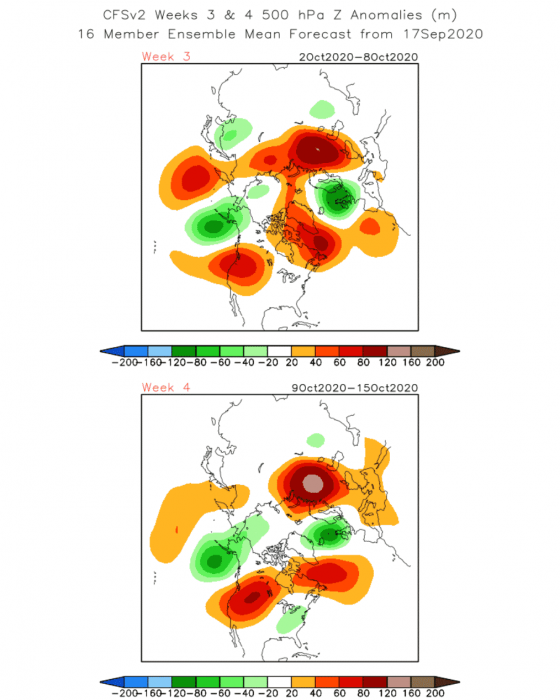 Focusing on North America, the strong high-pressure system and the very warm airmass will stagnate over western parts, with cooler conditions over the east. This raises concern for the drought conditions in the southwestern and southern United States. 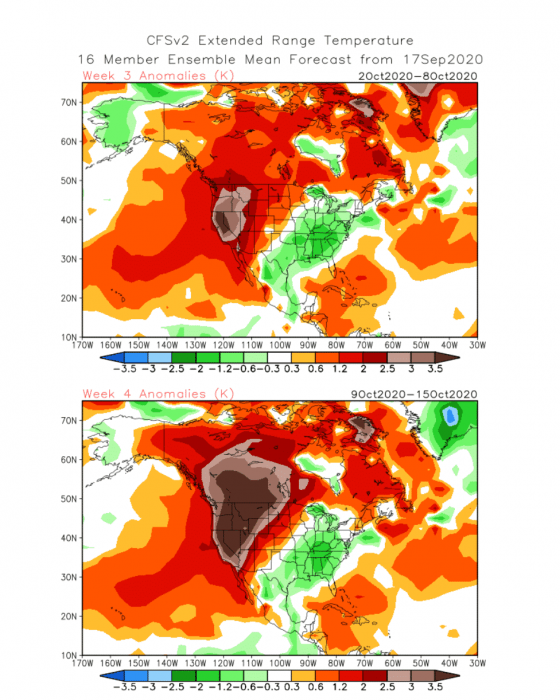 A quick look at the October forecast, shows a low-pressure pattern developing over northwest North America, which is a sign of the first more obvious pattern change from the developing La Nina ENSO cycle, indicated in our Fall forecast 2020 article.
Over Europe, the low-pressure area is lifted north, with high pressure again dominating the western and parts of Central Europe.

We will soon release our first Winter 2020/2021 forecast article, taking an early look at the first model forecasts for the upcoming winter, and why it might be different than last year. So stay tuned, and check back regularly to Severe Weather Europe.