Autumn months often result in waterspout events over the Mediterranean sea, especially the Adriatic, Ligurian, Tyrrhenian, and Ionian seas. The seas remain very warm and provide fuel for storms. In the case of the upper low and lack of winds/shear, the environment becomes conducive for waterspouts. This weekend, a waterspout outbreak occurred over the Adriatic Sea.

Clear air mass within the much colder air aloft has provided great observing conditions, so waterspouts were nicely visible even at a large distance. A number of waterspouts occurred across the north-central Adriatic Sea.

Here is an example of the waterspout seen from Lido di Jesolo near Venice, Italy while the waterspout was very far, ongoing under a storm complex near Pula, Croatia. That is the distance of nearly 120 km! 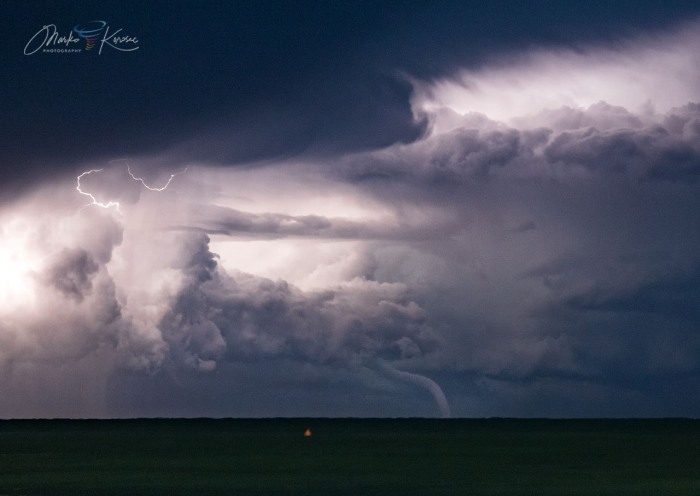 The weather pattern over Europe

The ongoing pattern over Europe reveals an impressive upper-level cold-core low, centered over central Europe, the Alps, and the northern Mediterranean. The pattern is resulting in unsettled weather conditions over the region, producing severe storms with flooding and waterspouts over the still very warm seas. 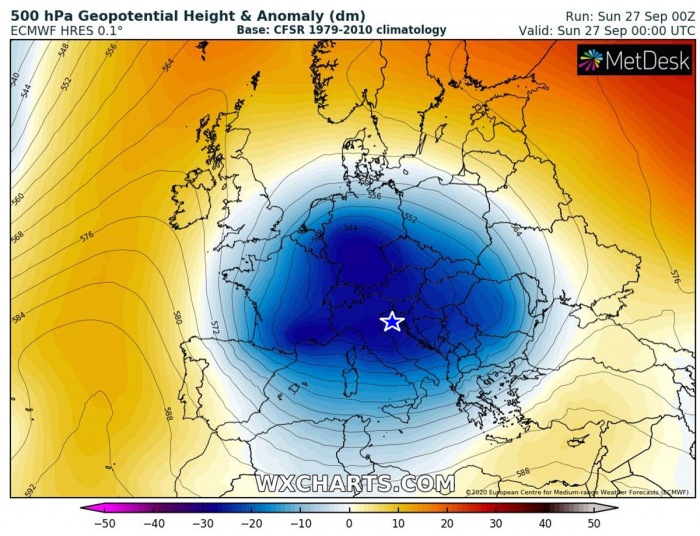 The marked area is the northern Adriatic Sea region which has developed a waterspout outbreak this weekend.

This large upper-level low is well-visible also on the water vapor satellite imagery. Here is the scan in early Sunday morning. We can see two cores in this broad circulation, one over southern Germany and another over Romania. 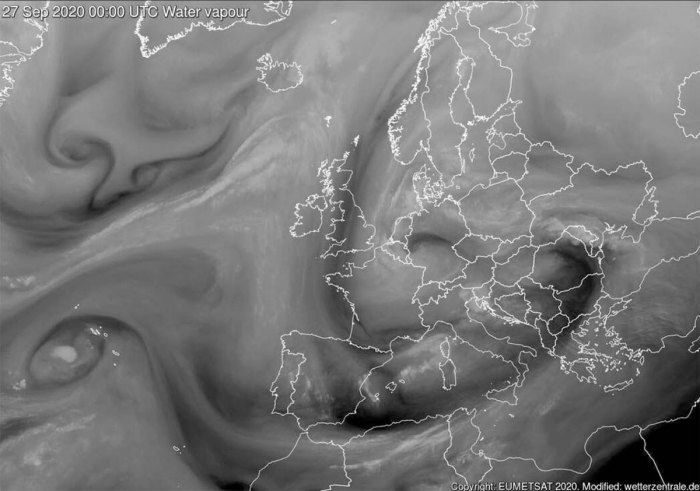 The third wave is entering the northwestern Mediterranean and will lead to rapid cyclogenesis over Italy tonight.

Here is the ECMWF model of the large upper-level low rotating over central Europe. The low gradually weaken over the next few days while another deep trough/low enters western Europe into early October days.

Graphics are provided by Wxcharts.com. 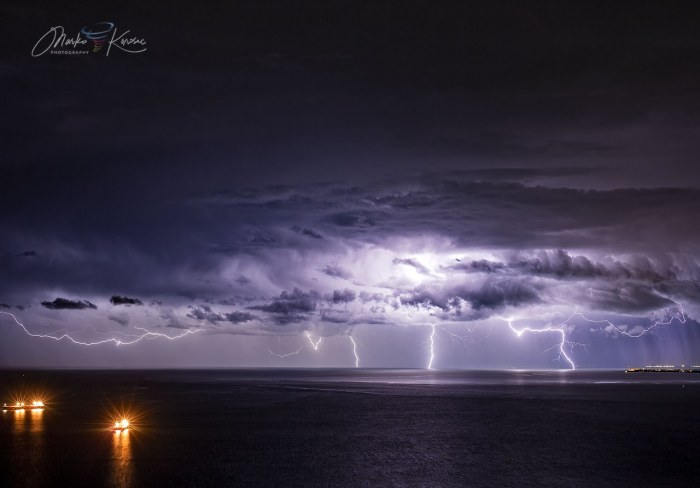 The lightning frequency was quite high, as seen from Lido di Jesolo, Italy. The explosive storm towers were illuminated by frequent lightning flashes and occasional cloud-to-ground lightning bolts. 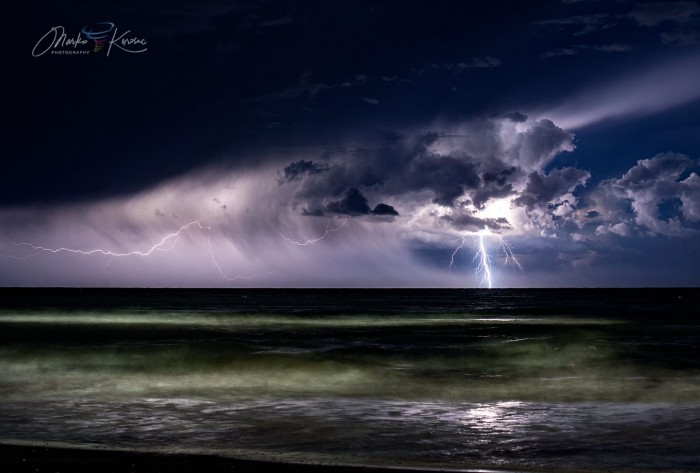 What made the scene even more remarkable at that time was a crescent moon shining through the clouds from the west. A combination of a lightning storm over the Adriatic Sea and the Moon created a magical sight! Storm chaser Marko Korosec was on the scene. 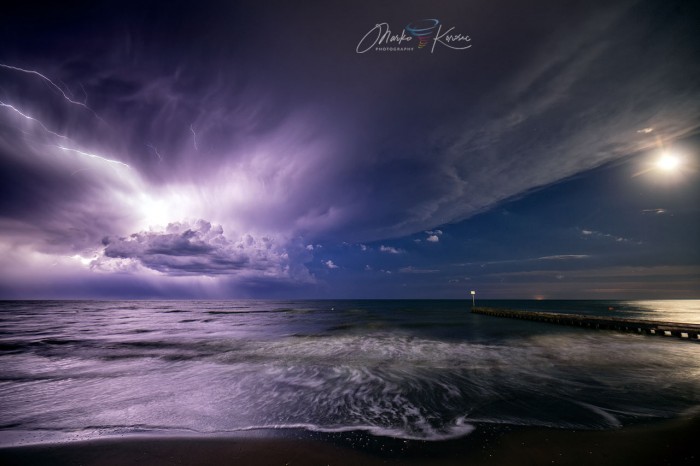 Then, storms were slowly spreading further south and merge into a large complex of storms. A large elephant trunk tornado/waterspout developed under one intense storm cell. At this time, the cell was in front of Pula, Croatia at a distance of around 120 km. 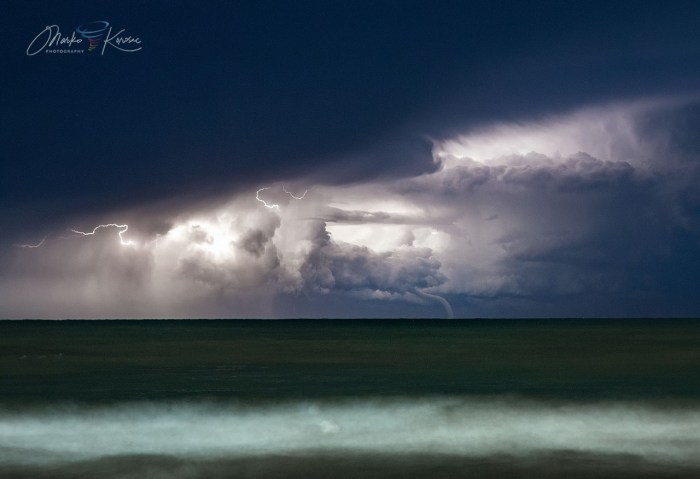 With the use of high ISO sensitivity and longer exposure, the waterspout was better visible, depending on the lightning flashes nearby. 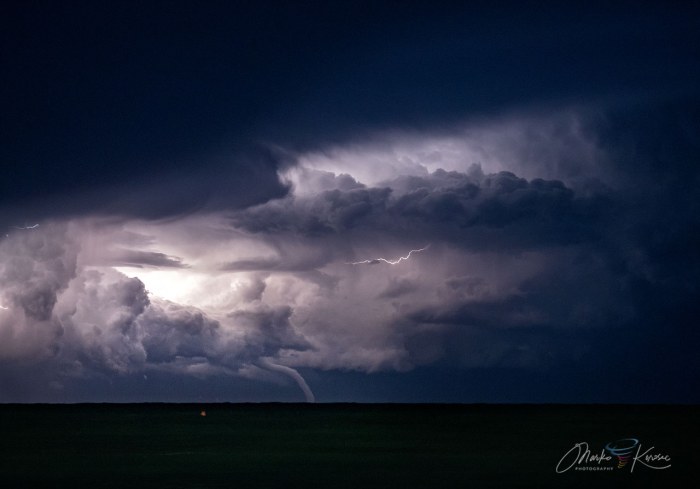 The waterspout event over this part of the Adriatic lasted for about 20 minutes when the rope out stage was seen. The waterspout has become longer and extends far away from its initial connection with the parent cloud base. 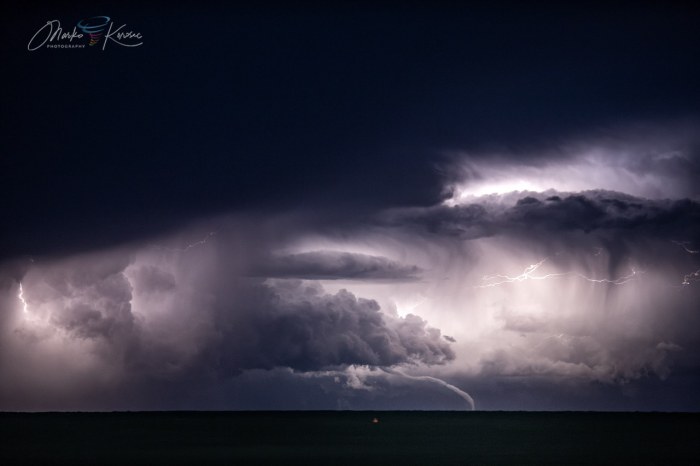 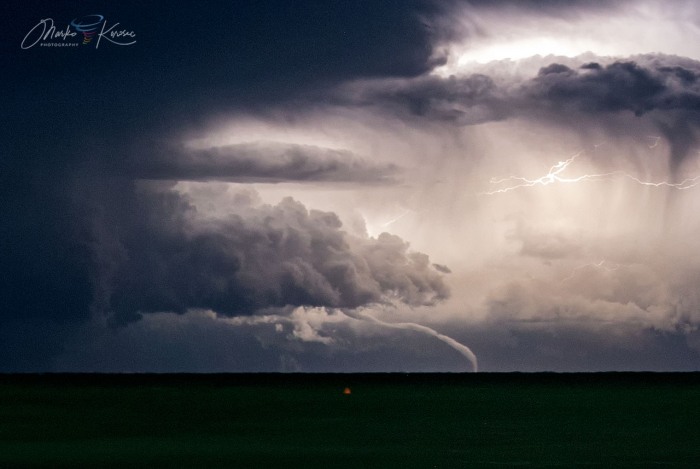 Storm chaser Niccolo Ubalducci was observing the event from the Fiorenzuola Di Focara, near Rimini along the Italian coast.

Niccolo reported more than 15 waterspouts have been visible between 10.30 pm and 3.30 am. The view of the explosive towers was best from his position. From time to time, there were two or even three waterspouts visible at the same time. 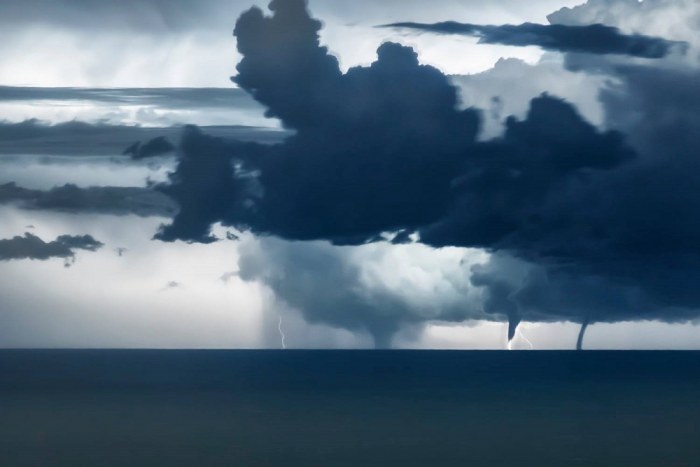 Another storm chaser, Entoni Novosel, was observing the complex of storms from Pula, Croatia. Attached are photographs revealing two waterspouts and CG lightning strikes. The right one was very large and probably strong. 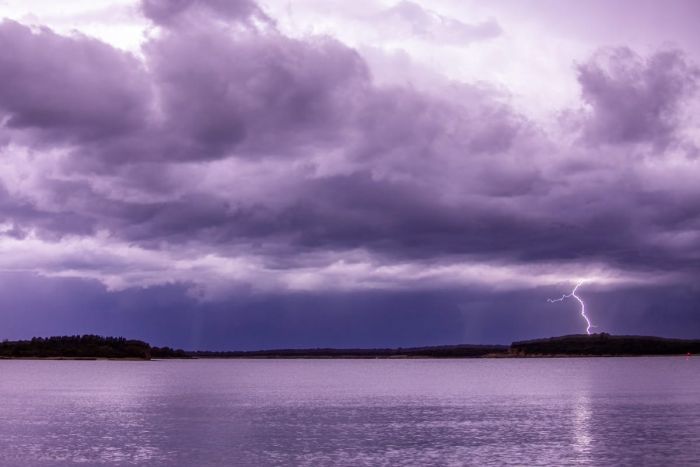 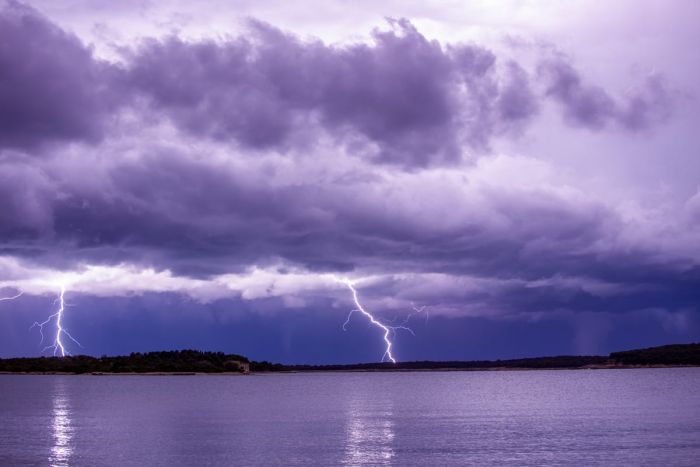 Storm chaser Sandro Puncet was observing storms from Mali Losinj, Croatia. A quite spectacular scene with explosive storm towers and lightning barrage. A tiny waterspout can be seen in the back near the left lightning bolt. 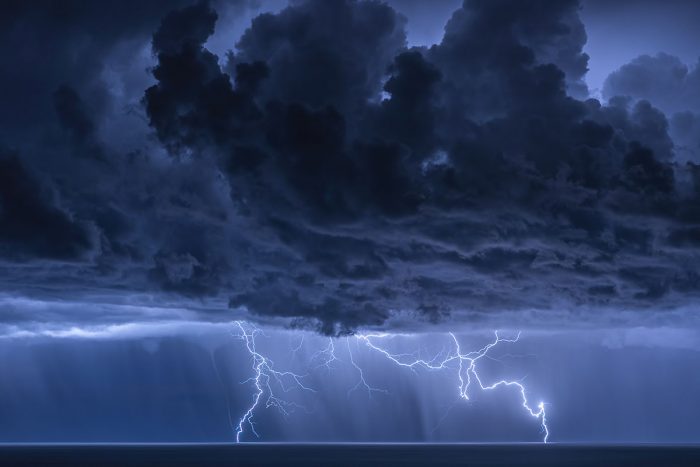 Here is another shot of a different waterspouts Sandro photographed. The events were to the west of the island Mali Losinj, near island Susak. About 50 km to the west. 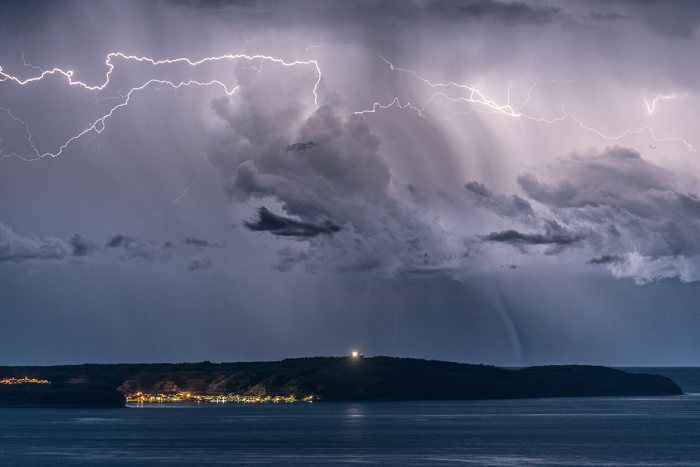 The line of storms (flanking line) was extended this far south from the main storm complex further north.

Here are some additional shots by storm chaser Gregor Vojscak who was also observing the event from Lido the Jesolo, Italy. 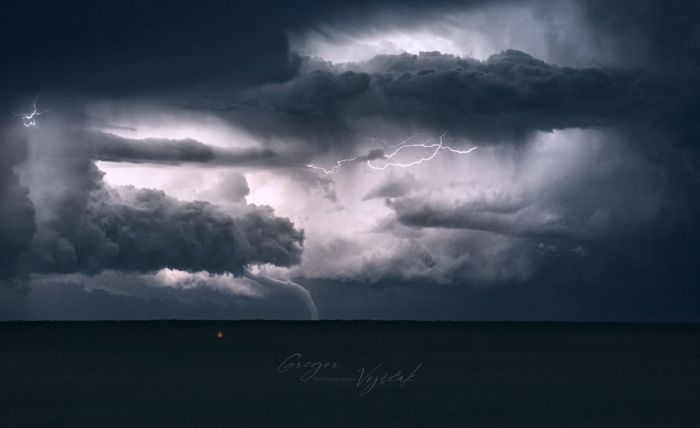 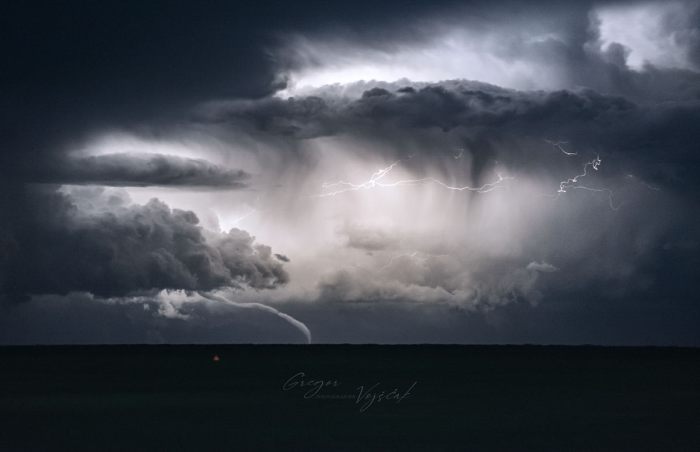 In northwestern Istra (Umag & Novigrad, Croatia), storm chaser Maja Kraljik was observing the complex from the eastern side. Some storm structure appeared as well, while the lightning show was adding a great illumination of the clouds. 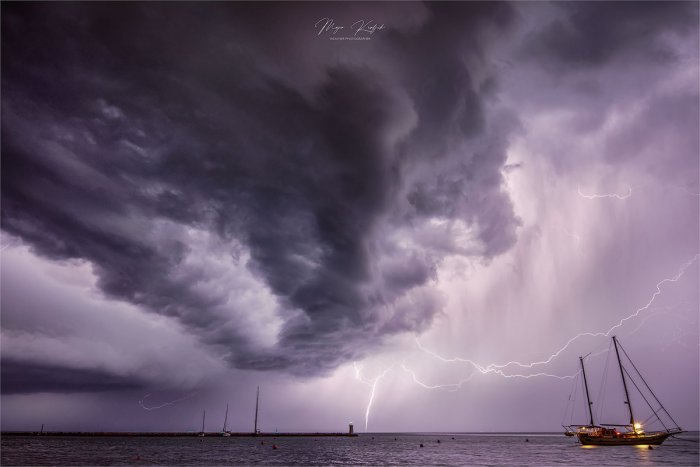 A waterspout was also seen from Umag, Croatia in the late morning on Sunday as new storms have developed west of the Istra peninsula. 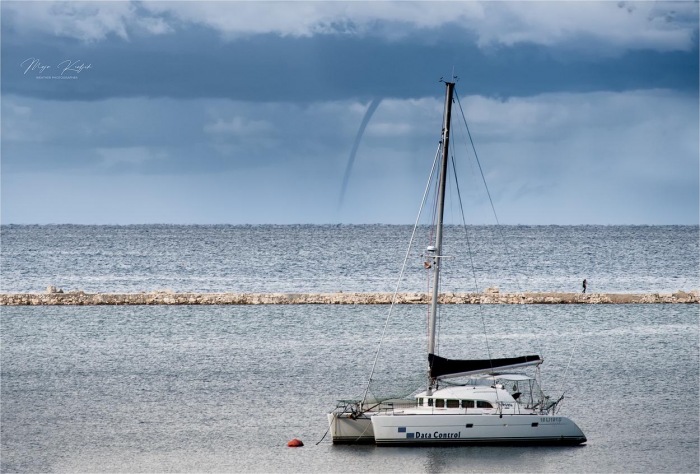 Forecast discussion about this pattern earlier this week:

What is a waterspout

A waterspout is an intense columnar vortex (usually appearing as a funnel-shaped cloud) that occurs over a body of water. Water is normally very warm while cold air exists along. Often, weak winds are required.

Waterspouts exist on a microscale and their environment is only a few kilometers width. They can also develop from a towering cumulus cloud while no lightning is present.

Often, more than one waterspout can occur in the same vicinity at the same time. It has happened several times already over the Mediterranean region. Or over the of for example over the Lake Michigan, Gret Lakes, US.

Tornadic waterspouts can also occur. Those are referred to as “tornadoes over water”, as they form from the mesocyclones in a supercell storm. Their occurrence is identical to land-based tornadoes in connection with severe thunderstorms, but are occurring over water.

Waterspouts that are not associated with a rotating updraft of a supercell thunderstorm are known as “non-tornadic” or “fair-weather waterspouts”.

Tornadic waterspouts have occurred over the southern Mediterranean (e.g Taranto Gulf) or over the Ionian Sea in the past, doing severe damage coming ashore.