A rapidly worsening forecast condition for tropical storm Ian in the central Caribbean has put the entire state of Florida into the State of Emergency. Ian is forecast to strengthen into a hurricane by Monday morning, reaching major intensity prior to the system grazing across western Cuba. Then, Ian should take an advantage of the extremely warm waters of the southeastern Gulf of Mexico. This could allow the storm to intensify into potentially the most intense hurricane of the Atlantic season in 2022, peaking as a strong Category 4. Posing significant flooding, storm surge, and wind threat for a large part of Florida and the eastern Gulf Coast.

Just days after major hurricane Fiona peaked as a category 4 between Bahamas and Bermuda, followed by havoc in Atlantic Canada, the tropics are literally on fire again.

A significantly improved environmental condition across the Caribbean region has churned another storm, that will turn into a potentially major hurricane. With the highest impact forecast for western Cuba, and the eastern Gulf Coast with Florida. Both the very warm Caribbean and Gulf waters are hinting at the next major hurricane to develop pretty quickly in the coming days.

Tropical Storm Ian is forecast to become the first (major) hurricane to make landfall on the United States mainland this Atlantic Hurricane Season 2022. So far, 9 storms have been named, three of those were hurricanes – Danielle, Earl, and Fiona. The season is going through its statistical peak season period.

First, Ian is expected to produce very heavy rainfall and instances of flash flooding and possible mudslides in areas of higher terrain, particularly over Jamaica and Cuba. As it moves further north, flash and urban flooding are possible with heavy rainfall across the Florida Keys and Florida peninsula through mid-this week.

Both hurricane and tropical storm conditions are expected on Grand Cayman beginning early Monday, already being under the hurricane warning. Once Ian is forecast to become a major hurricane while it passes near or over western Cuba in early Tuesday, there is increasing confidence in a life-threatening storm surge and hurricane-force winds in portions of western Cuba from late Monday into Tuesday.

Hurricane and tropical storm watches are now in effect for much of western Cuba.

After Tuesday, Ian is expected to remain a major hurricane and could strengthen further given the very warm sea waters across the Gulf of Mexico. Heading for a major impact on Florida.

Regardless of Ian’s exact track and intensity, there is a high risk of major storm surge, hurricane-force winds, and heavy rainfall along the west coast of Florida and the Florida Panhandle by the middle of the week. Residents in Florida are urged to ensure they have their hurricane plan in place, follow any advice given by local officials, and closely monitor updates to the forecast track.

This year, ocean waters across the whole tropical Atlantic, the Caribbean, and the Gulf of Mexico remain very warm, even hot in some areas. Sea temperatures are anomalously warm compared to normal. The overall conditions are now very favorable for the upcoming peak season weeks through the final days of September into October ahead.

ATLANTIC WATERS ARE EXTREMELY WARM, INCLUDING THE CARIBBEAN REGION, AND THE GULF OF MEXICO

Since the temperatures are the highest during the summer months, also the Atlantic Ocean sea surface temperatures are statistically very warm. This is also thanks to more stable weather that helps to warm up the waters into the low 30s °C. The recent sea surface temperature anomaly reveals that the whole Atlantic Basin, and especially the western parts, has anomalously warmed up this hurricane season. The Caribbean and the Gulf of Mexico are now extremely warm.

The most recent major hurricane Fiona has taken the advantage of these significantly warmer oceanic waters, explosively developing after passing Dominican Republic and Puerto Rico. Impacted the Bahamas and blasted into Atlantic Canada as a violent post-tropical storm this weekend. Farther west, very warm seas across the Caribbean and the Gulf, therefore, give concern for Ian to be the next Category 3 or 4 storm prior to making its landfall on the United States Gulf Coast.

The sea temperatures of around 2-4 °C warmer than normal, will undoubtedly give hurricane Ian a major fuel to gain its strength while passing western Cuba and continuing towards the Gulf Coast impact through mid-this week.

Note, that the Atlantic Basin sea waters are, typically the warmest in the western Caribbean region and over most of the Gulf of Mexico. Right now, the sea surface temperatures are from around 28 to 30 °C in the central tropical Atlantic, they are even warmer farther west. Water surface temperatures of 31 °C or even a warmer are observed over the easter Gulf of Mexico, around Florida and Cuba. So the majority of the Gulf of Mexico and the Caribbean are in the low 30s °C.

This is a very significant signal for the Ian and additional tropical waves later on. These extremely warm sea waters often lead to the most intense systems, tracking closer to the Caribbean region and the United States mainland. Many tropical cyclones in the past have encountered explosive development while moving across such warm and moist fuel at the sea surface. And this is the main concern for tropical storm Ian now, as it is forecast to take the likely worst-case track scenario for the Gulf Coast.

The below-normal storm activity across the tropical Atlantic from July to August has allowed oceanic waters to anomalously warm-up also across the so-called MDR region. This region is known as the Main Development Region. This is an area extending between the Caribbean Sea and West Africa where the majority of the tropical system form during the last summer and fall months.

Normally, as tropical waves begin ejecting off the West coast of Africa, much warmer than normal sea waters lead to a significant tropical cyclone development. As convective storms are mainly fueling themselves from the very warm air and high moisture, tropical Atlantic ocean waters are the perfect fuel for them. The Atlantic Ocean waters will remain extremely warm through the peak weeks of Hurricane Season 2022.

ATLANTIC HURRICANE SEASON IS AT ITS PEAK ACTIVITY

The weather system around the world is a very complex and dynamic system of chaos theory which means that weather patterns are also very different. When we are speaking of the tropical regions, dynamics there are one of the more complex things to forecast. They have a lot of factors to consider when forecasting tropical cyclones, including sea temperature, wind shear, upper-level conditions, and even land interactions.

When the very perfect combination of conditions is met, this results in the formation of tropical weather events such as tropical storms or hurricanes that can become a potential threat to land and property.

The Atlantic Hurricane Season 2022 has started with a very low, near record-low activity with only three named storms until the end of August. Then, conditions significantly improved and many more storms followed as September rolled in. This is the time when the usual peak in activity occurs. Hurricane Danielle and Earl, major hurricane Fiona, to name a few so far this year. The tropical storm Ian is the 9th named storm so far this year.

Based on the statistical data, the Atlantic hurricane season annually produces around 14 named tropical storms. There are 7 of those storms that are upgraded to hurricanes. And 3 of them would normally reach major strength (a hurricane of a Category 3 or greater).

As we can see from the chart above, a typical Atlantic hurricane season has two peaks. The first peak of increased activity occurs through mid-September. We can see that 2022’s activity has been well-aligned with the long-term statistics, as there are currently 3 systems active simultaneously. Then, another, secondary boost in the tropical activity usually follows through mid-October. 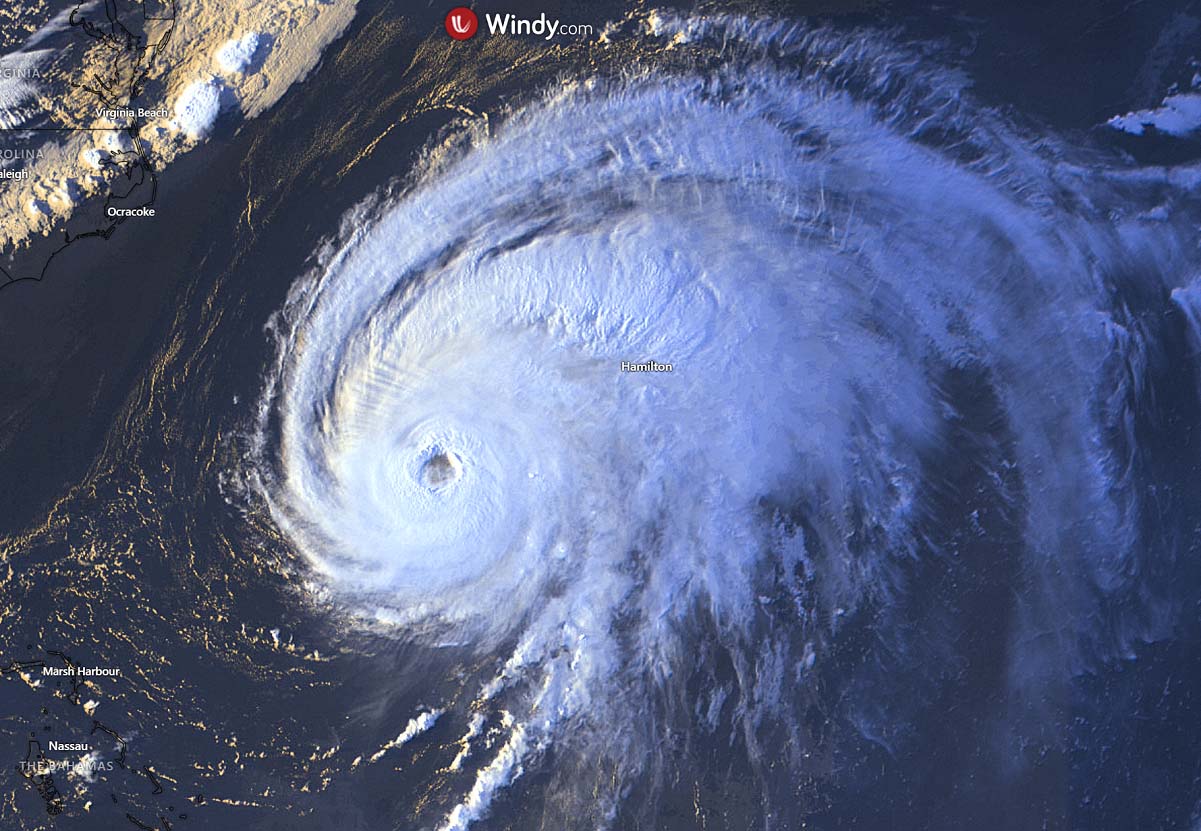 A hurricane development (above is the visible satellite image of a Category 4 storm Fiona) is a very specific formation in the tropical region. It is strongly sensitive to atmospheric conditions that are present at a given time. When the upper-level conditions with tropical waves (most importantly, an MJO wave), are present, those have the strongest influence on the state of the atmosphere. In other words, we need both the extremely warm waters and great flow in the upper atmosphere combined together so that tropical storms or hurricanes can develop.

Tropical systems normally require a very warm sea water temperature of at least 26 °C or above. Then, very high moisture has to be present at the lowest levels of the atmosphere as well. Unlike the mid-latitudes cyclonic systems we know, the tropical region has no warm or cold fronts. So, the weather activity is in general a combination of showers and thunderstorms, including a larger scale pressure and wind variability.

Most of this variability in the tropical region is driven by invisible wave-like features that we find in the atmosphere around the world. The main role is played by the MJO wave (schematic chart above) which provides low vertical wind shear through the atmosphere. These waves are ejecting off the west coast of Africa, traveling into the central Atlantic, and then helping to boost the development of a surface low-pressure system. These are the early starters of tropical storms.

MJO wave is an eastward-moving wave that contains convective showers and thunderstorms and typically circles the entire planet in about 30 to 60 days. One side of the wave has favorable conditions for tropical cyclone development and the other is suppressing these conditions. So to have improved conditions, the part of MJO with upward motion has to be present over that part of the tropical region. In the current time, the western Atlantic these weeks.

IAN IS FORECAST TO BE A MAJOR HURRICANE ACROSS WESTERN CUBA, THEN HEADS FOR IMPACT U.S. GULF COAST AND FLORIDA MID THIS WEEK

The Atlantic Hurricane Season 2022 had no United States impacts with storms of hurricane strength so far. If the forecast verifies, Ian would be the first Atlantic hurricane to hit the mainland U.S this year.

Tropical Storm Ian remains within an environment that appears quite conducive to further strengthening. 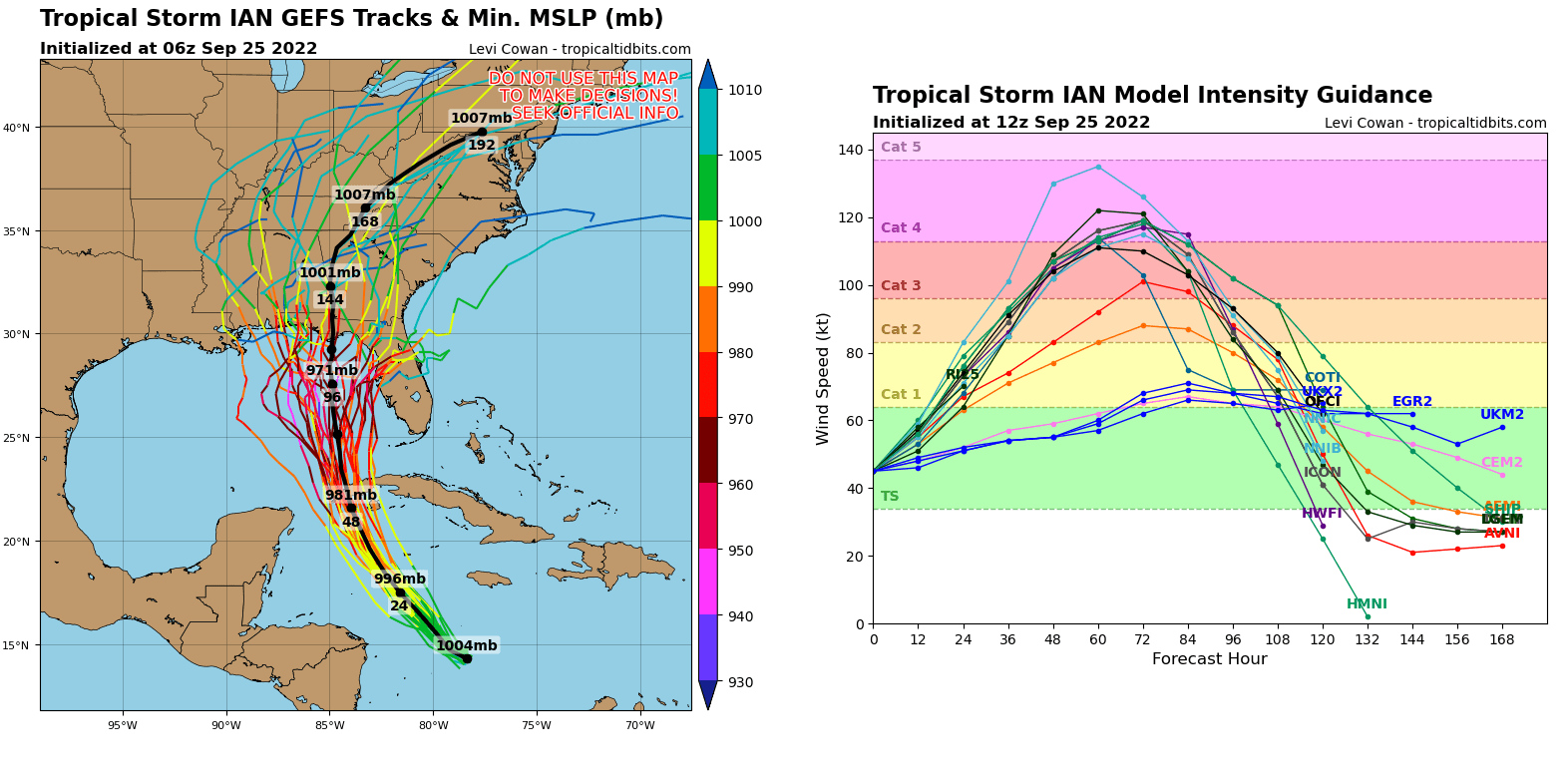 Ian is forecast to become a major hurricane in about 48 hours, likely prior to reaching western Cuba land. This would put this part of Cuba into a significant threat of storm surge, severe winds, and floods.

The first impact of Ian will be the Cayman Islands on Monday, then it turns for western Cuba. The worst wind and flooding conditions for western Cuba are likely from midday Monday through Tuesday afternoon, while the hurricane will follow its general northerly trajectory.

Soon after Ian exits Cuba on Tuesday, it will gain further strength from the extremely warm ocean waters of the southeastern Gulf of Mexico. This should allow Ian to reach Category 4 strength, potentially becoming the strongest storm of the Atlantic Hurricane Season 2022.

Regardless of its final track towards the Gulf Coast, it is becoming increasingly likely that Ian will pose a major hurricane threat to the U.S. mainland from Wednesday into Thursday this week. Besides severe winds, the major threat will become heavy rainfall and floods, combined with significant storm surge.

Flash and urban flooding are possible across the Florida Keys and the Florida peninsula through midweek. With additional flooding and rises in area streams and rivers across northern Florida and parts of the southeast U.S., later this week cannot be ruled out, especially in central Florida given already saturated conditions.

Ian is actually taking the worst-case scenario track, meaning that the storm is aiming for an explosive development over the very warm waters of the northern Caribbean into the Gulf. And turn for a major impact on the United States Gulf Coast.

Our team will be closely monitoring any further development of Ian and will keep you updated, stay tuned.

Images were provided by Windy, TropicalTidbits, and NOAA NHC.