A massive advance of high-pressure systems over the North Pole will help to break down the usual jet stream flow of the polar vortex. The biggest shift will be observed over the North Atlantic, where the usual circulation will be disrupted. It will affect both North America and Europe, as seen on the 10-day forecast and beyond.

The expansion of the high-pressure system has helped to establish a low-pressure area over eastern Canada and the United States and western Europe.

The image below shows the temperature anomalies for October so far. Europe is warmer over central and eastern parts, but generally colder than normal over western Europe.

North America is divided into two parts, the east, and west. The Eastern side has seen colder than normal air temperatures, due to the presence of the low-pressure system and the northerly flow from Canada. Over western Canada and the western United States, a high-pressure area was dominant, locking down a warm airmass. 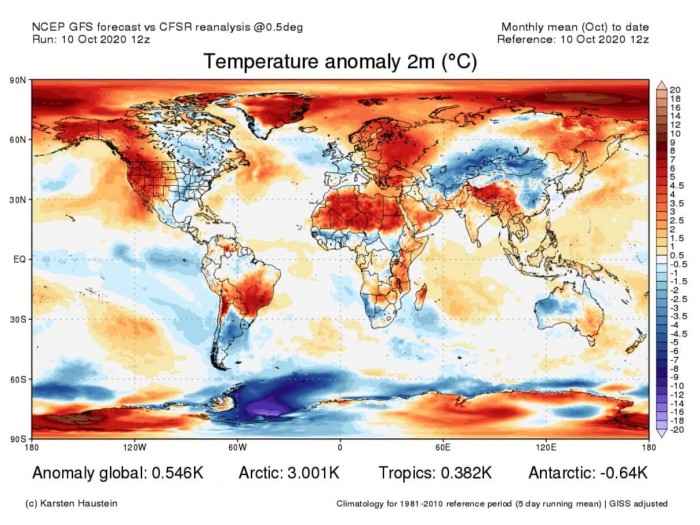 Currently, the high-pressure area over western Russia and Scandinavia is still ongoing. But a new powerful ridge is expanding from the North Atlantic towards the Arctic circle, seen in the image below.

It has blocked the jet stream flow, diverting it north. It has enabled northerly flow over Europe, with a cold front spreading over most of the central and western Europe.

Over North America, the pattern is in a transition, with a low-pressure system over western parts, and a ridge expanding over the United States and into Canada. 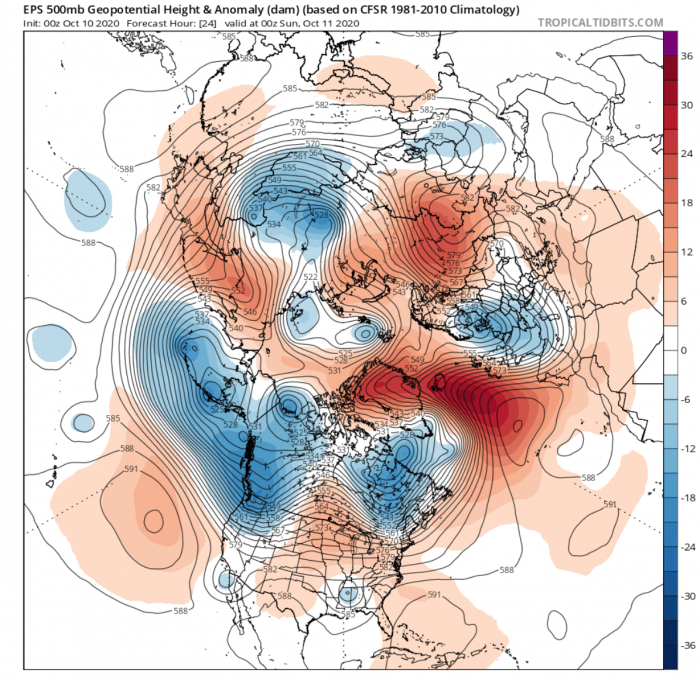 The image below shows the airmass temperature anomalies, and they reveal the progressing cold front over Europe. We can also see the strong positive anomalies over the North Atlantic, and especially Greenland, brought there by the strong expanding ridge.

At the same time, we can see the much warmer than normal airmass over the continental United States and southwestern Canada. Warmer airmass is being transported in the southerly airflow, produced by the low-pressure system over Alaska and western Canada. 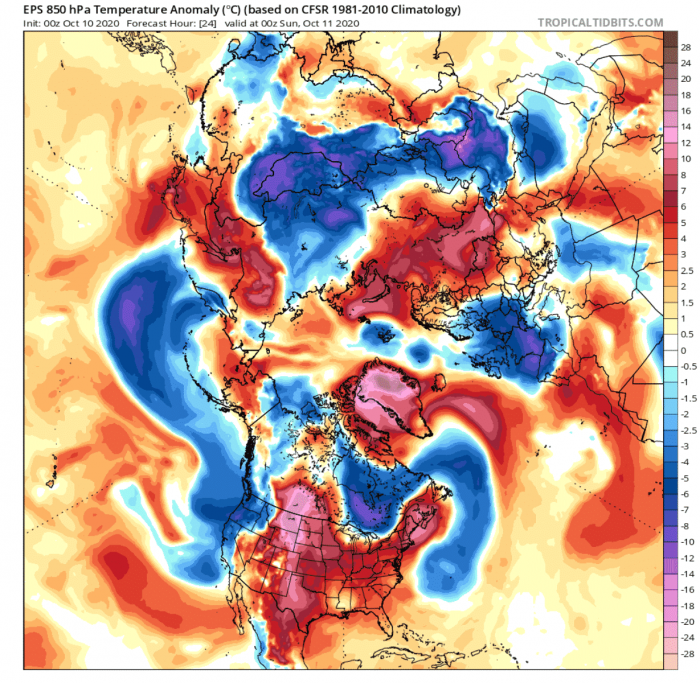 THE POLAR VORTEX IN TROUBLE

When we see the strong high-pressure systems crawling up towards the north, it usually means that at some point in time and space, the jet stream flow will be disrupted, and the weather will get wild. The jet stream is a large and powerful stream of air (wind) at around 8-11km (5-7mi) altitude. It flows west-to-east around the entire hemisphere, affecting pressure systems, and their strength, thus shaping our weather at the surface.

The example image below shows the jet stream at 250mb level (10km/6.2miles altitude) in October 2008, when the polar circulation was strong. The jet stream usually has two max speed areas, one in the Pacific and one in the North Atlantic. 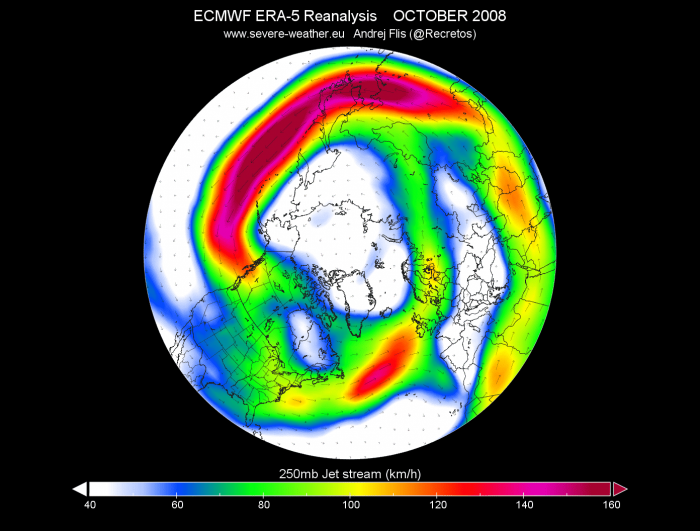 The polar jet stream that circles the hemisphere, outlines the large polar vortex, which spins over the Northern Hemisphere. The image below shows the layers of the atmosphere, and the polar vortex can actually be found from the ground up into the stratosphere (green) and even higher, reaching over 50km in altitude. 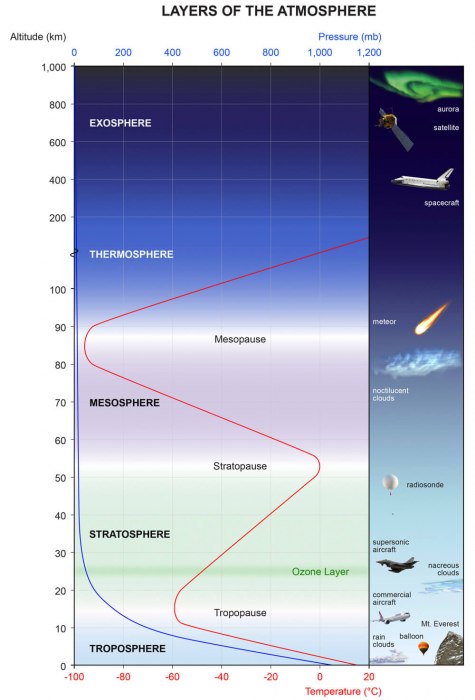 The polar vortex we usually talk about is found in the stratosphere (12-50km altitude), but it actually reaches all the way down to the ground. We can see in the example image below for late October, how the polar vortex looks at different altitudes. It is essentially one large cyclonic circulation area. The lower we go, the more dynamic or “disrupt” it is. That is because of the effects of terrain, like mountains on the dynamic circulation and the weather fronts.

Looking at October 2008 again, we can see the pressure anomalies, which show deep low-pressure systems were dominating the North Pole and the North Atlantic. This pattern shows a strong polar vortex and a strong westerly jet stream, bringing mostly mild/warmer conditions to Europe and most of the United States. 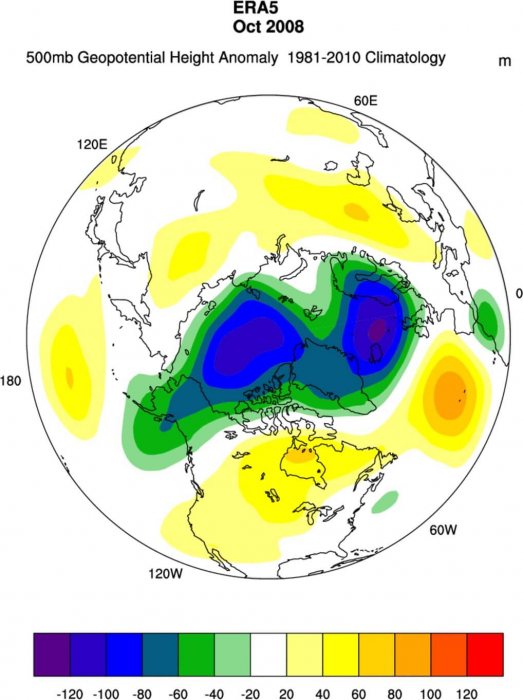 The October 2008 example on the image above shows a near-perfect scenario for a strong tropospheric polar vortex and a strong westerly jet stream. Tropospheric just means the bottom/lower part of the circulation, at around 5km altitude. But on the high-resolution animation we produced below, you can see how that structure breaks down, into smaller low-pressure systems, while high pressure takes over the North Pole.

This week, the low-pressure system we mentioned earlier and is currently over Alaska and western Canada will progress towards the east. It will move over central Canada, before descending down into the United States. On its front, it will help to build a new high-pressure area over the North Atlantic and over Greenland. This will help to lock down the pattern over Europe for a while, keeping the colder air in place. 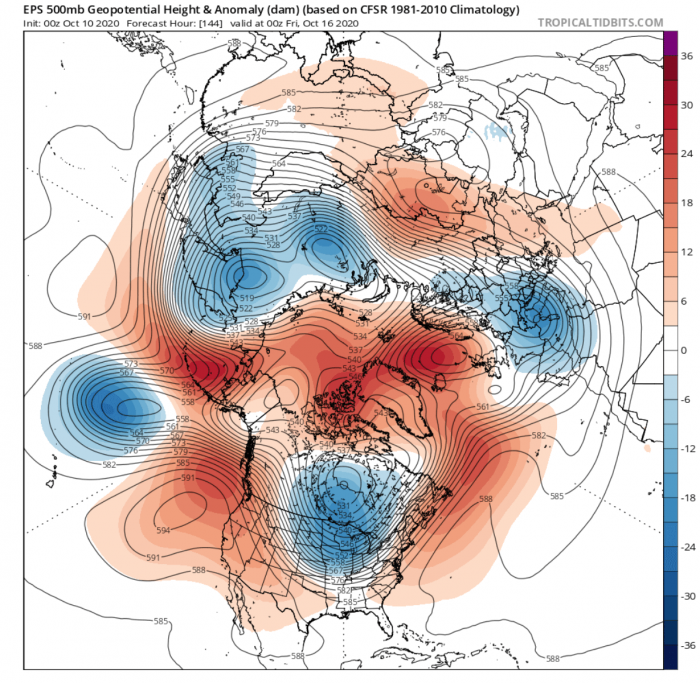 Temperature anomalies reveal unseasonably cold weather over Europe, central Canada, and the central United States, where the cold air is still progressing further towards east and southeast. In the meantime, the northeast and the southwestern United States are under warmer than normal weather. Greenland will experience much warmer than normal for this time of year, due to strong warm air transport with the high-pressure system. 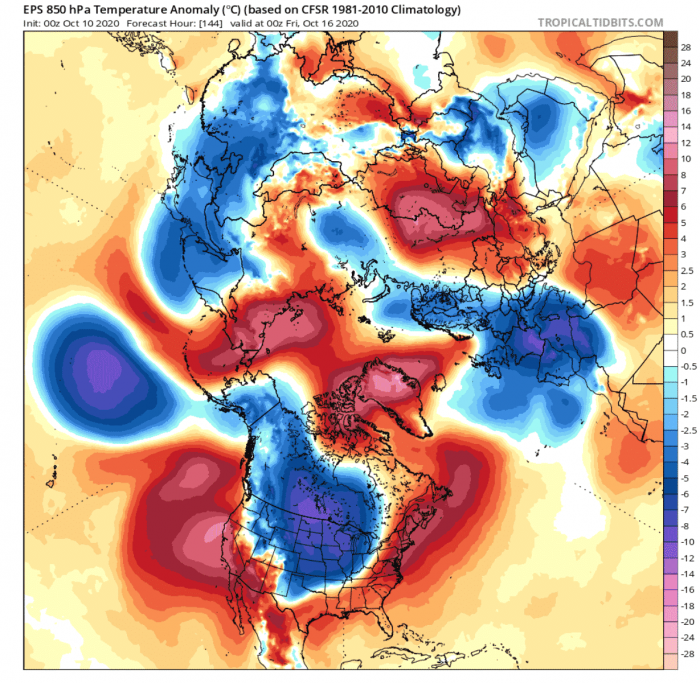 Remember the jet stream? If we look at it now, we can see that it is quite deformed over North America. It will drop down into the United States, along with the unseasonably cold air. Instead of flowing in s a straight line from North America to Europe, it is being deformed, and actually cut off from Europe. As it waves towards Greenland, it helps to amplify the high-pressure system and the warm air transport. 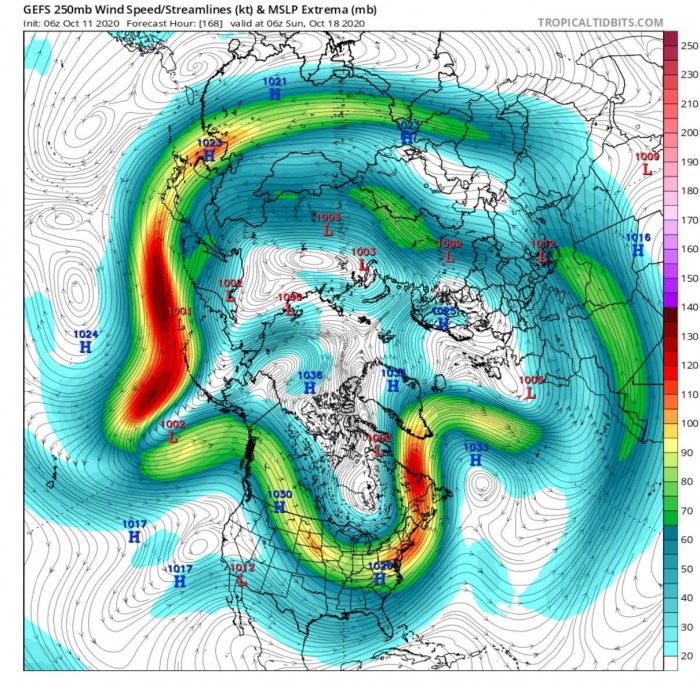 A lot of energy is involved in these processes. The pattern will be strong enough to sustain itself, kinda like a strong flow of water. The forecast for early next week shows the low pressure over Canada and the northern United States will persist. Along with the high pressure over the North Pole and the North Atlantic.

The low-pressure area over Europe will slowly expand west, in response to the shift in the ridging over North Atlantic. 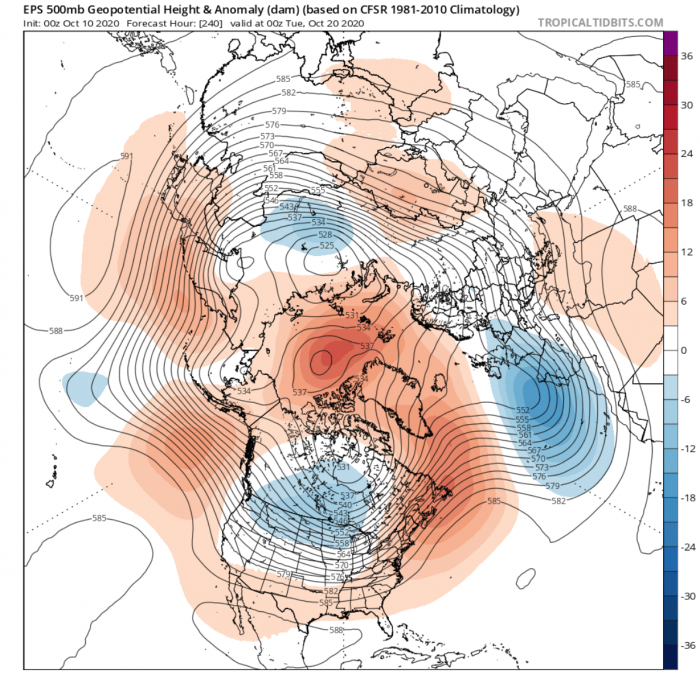 Temperature anomalies reveal the persistence of the colder air mass over central Canada and the central and northwestern United States. In the meantime, Europe will be less cold briefly, recovering from the cold front, but the pattern will support further transport of cooler air into the Old Continent. Scandinavia will continue colder than normal, thanks to the strong high-pressure system over the North pole. The same high-pressure system will create unseasonably warmer than normal temperatures over the North Pole. 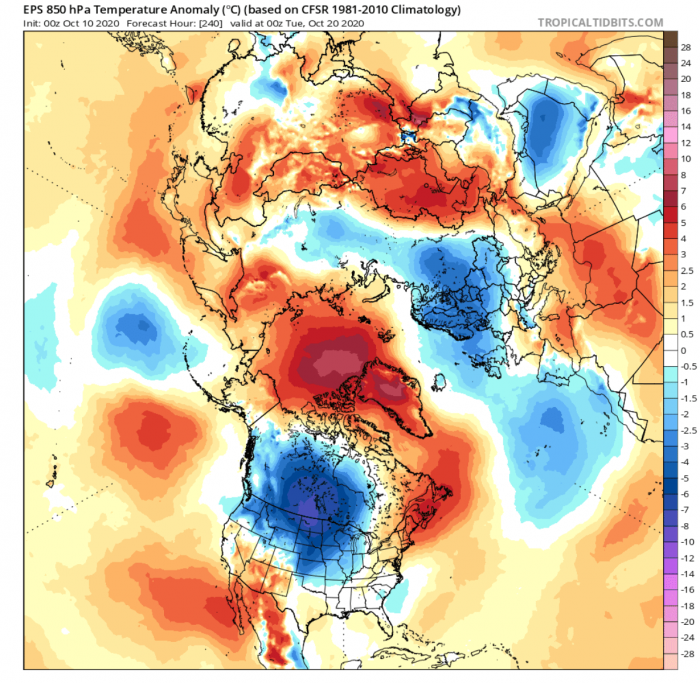 One pair is the low and high-pressure areas over Canada and North Atlantic, the second is Europe low and western Russia high. The third pair is Siberia low and east Asia high, and the fourth wave is the Pacific low and western North America high. 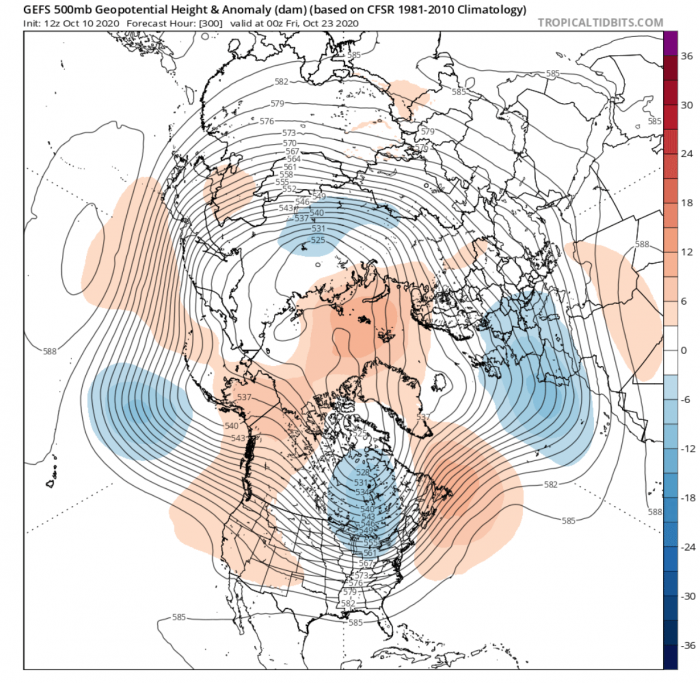 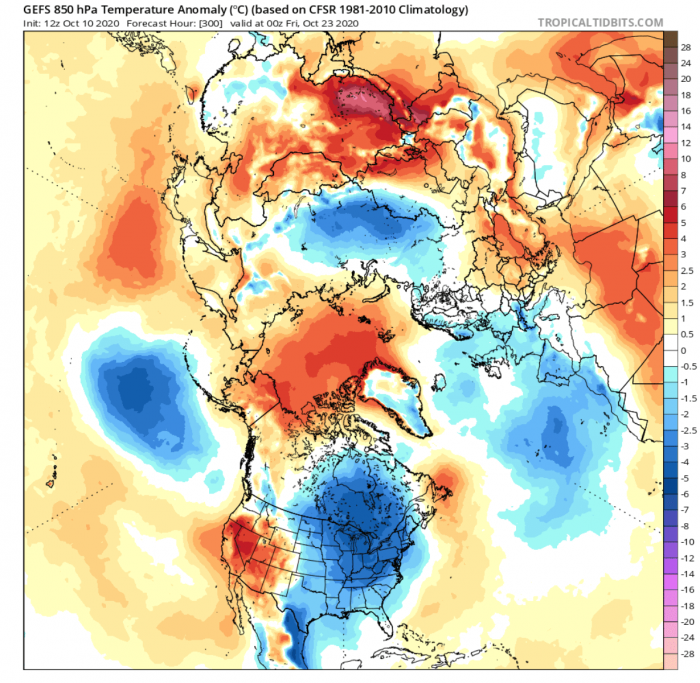 The forecast for the final week of October hints at the continuation of this 4-wave pattern. We see the polar vortex being broken down into more individual stronger cores, while higher pressure dominates the polar regions. 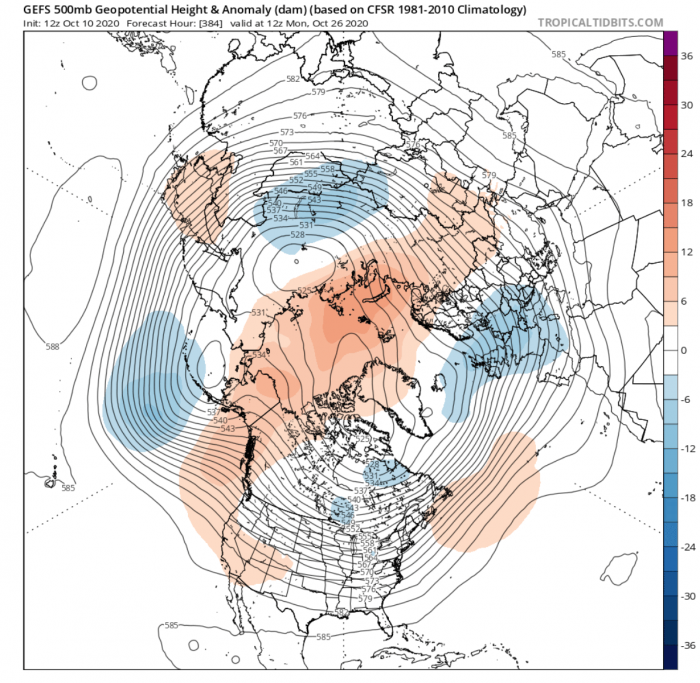 Temperature anomalies reveal the colder than normal weather associated with these residual cores of the tropospheric polar vortex. Colder weather is expected over Central and Northern Europe, and also Canada and the eastern United States. This is just a forecast trend, and some scenarios also hint at a potential new major cold shot into the central and eastern United States in this period. 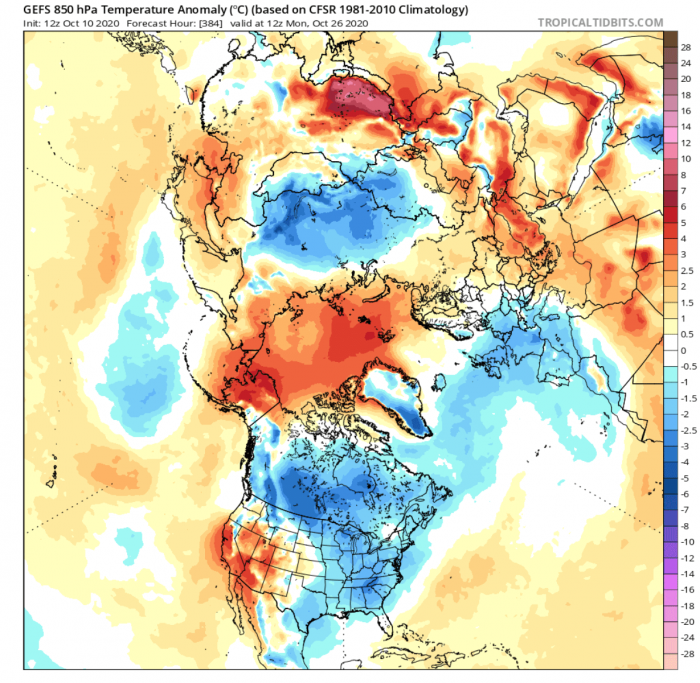 Looking further to the extended range from the weekly CFSv2, we can see the trend supporting the strong North Atlantic high-pressure area. This would help to persist the lower pressure over eastern Canada and the eastern United States. At the same time, it helps to lower the pressure over northwestern and northern Europe. 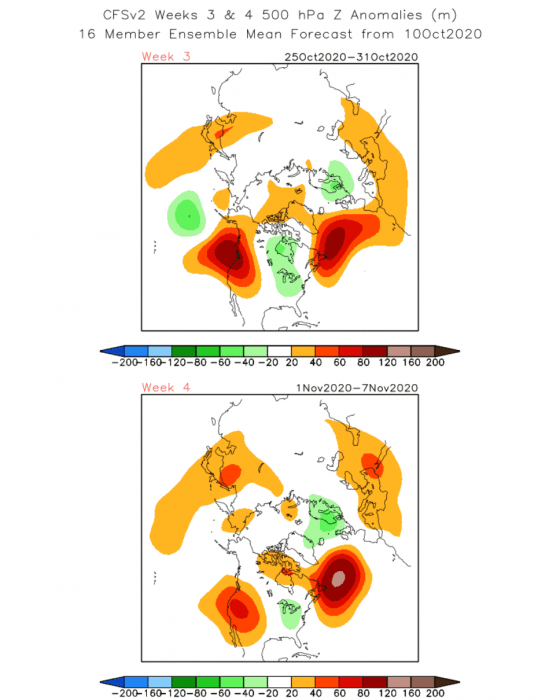 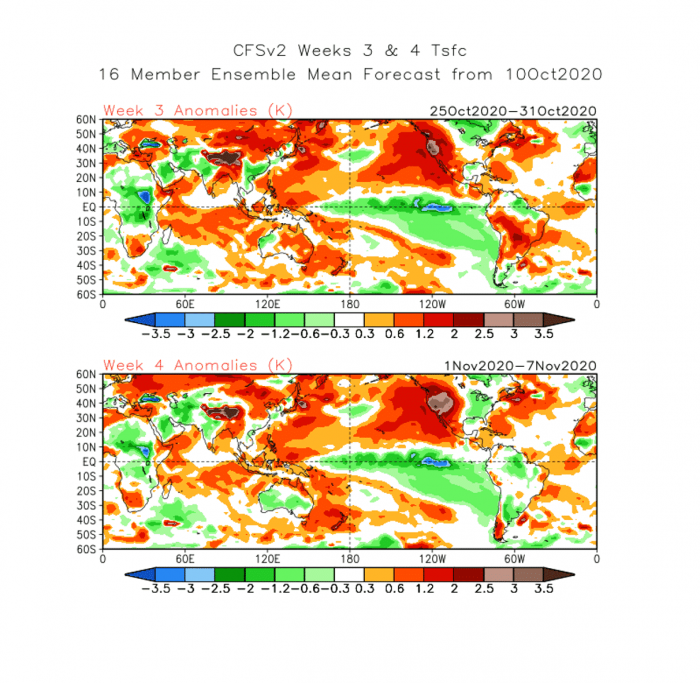 In general, the 10-15 day forecast indicates the persistent flow of cooler or colder airmass into the central and parts of the eastern United States. Over Europe, the coldest area will be Scandinavia, with the potential for another cold wave into western Europe towards the end of the month.

The image below shows the 10-15 day forecast from ECMWF, revealing the probability for freezing surface temperatures. North America stands out, with Northern Europe also being in winter mode. 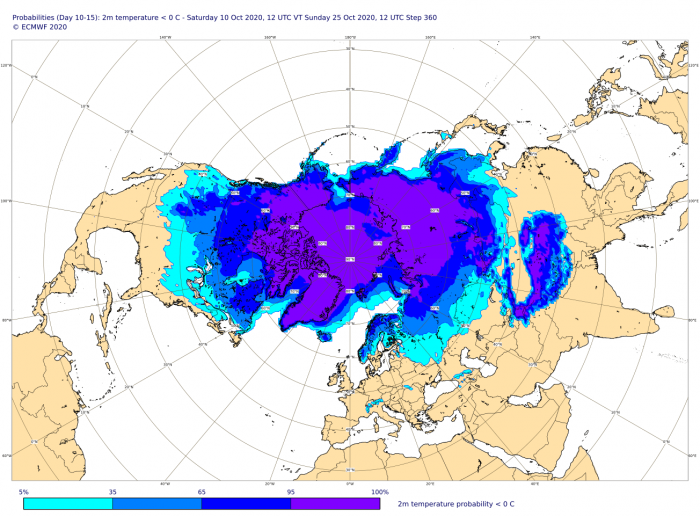 Take a closer look at the shifting weather patterns over the United States, going from unusually warm to a polar front:

>>Unseasonably hot weather develops across the United States, but a sharp pattern change and cold is forecast for this weekend<<

*Winter forecast 2020/2021* First look at winter reveals a different season is upon us, dominated by the new cold La Nina ENSO cycle