This weekend was very hot in some parts and will extend into a new week. But it will not last long. It is now becoming increasingly likely that a much cooler air mass will spread across the Contiguous United States. Trends are being monitored for a significant change as a potentially strong cold front is forecast to blast south from Canada through mid-October.

While the tropical weather over the Gulf and the Caribbean is taking a short break this week, the Contiguous United States and Canada are ahead of a significant pattern change through the next weekend.

The pattern change also leads to the formation of a very strong North Atlantic ridge, resulting in extreme temperature anomaly across eastern Canada, Labrador Sea, Greenland, and advecting also towards the North Pole.

On Friday evening, Hurricane Delta made landfall near the town of Creole, Louisiana. Although Delta has weakened prior to its landfall, the impact was of a Category 2 hurricane. Nearly 700,000 customers were left without power across Louisiana and southeastern Texas.

Incredibly, Delta made landfall just around 15 miles east of the landfall point of Hurricane Laura (a Category 4 storm) at the end of August this year. Attached is the evening CIRA geocolor satellite image of Delta during landfall. 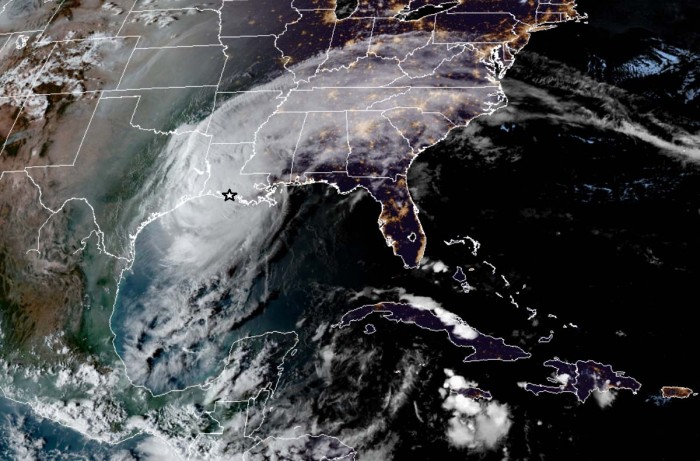 Delta was the first hurricane named after a Greek alphabet letter use which made landfall on the United States mainland. It was also the 10th named storm landfalling in the United States this record-breaking season, breaking the previous record of nine landfalls back in 1916! 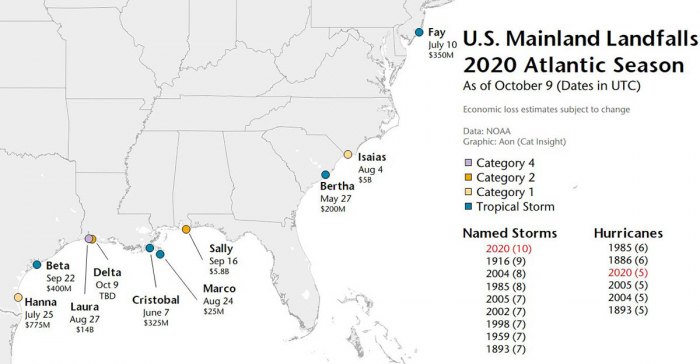 Soon after the hurricane Delta made landfall in Louisiana on Friday night, high-pressure spread across the southern United States. And so did the warm and stable air. This allowed temperatures soaring to near 100F in Texas. 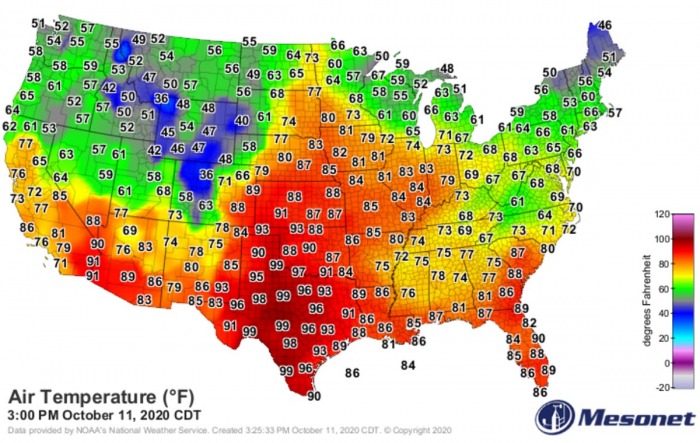 It has been unusually hot over the Midwest and the southern United States this weekend, with peak temperatures in low 90s F over Kansas and Oklahoma. The Upper 90s to near 100 °F across Texas! That is around 5-10 °F warmer than normal for this time.

It is also quite hot across the Southwest US and Southeast.

Hot weather should continue across the southern portions of the United States until Tuesday. Temperatures will again climb into the upper 80s and low 90s from the lower Mississippi valley across Texas towards the Southwest. 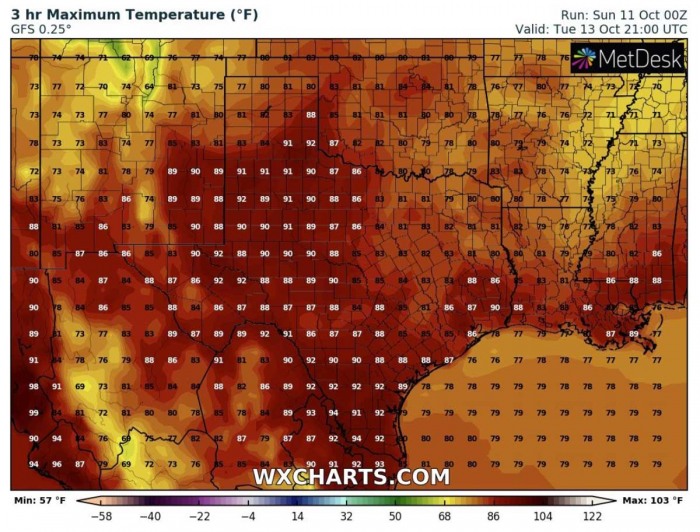 The conditions will be very humid, as a lot of rainfall associated with Delta, has been ongoing over the past days. This also means very warm nights are expected.

Then, through the mid-week days, the temperature returns into more seasonably conditions.

Weather model guidance suggests there will be a more robust, sharp pattern change late this week, precisely over the next weekend. A strong depression will establish across eastern Canada, while strong blocking high will strengthen across the western Contiguous United States. 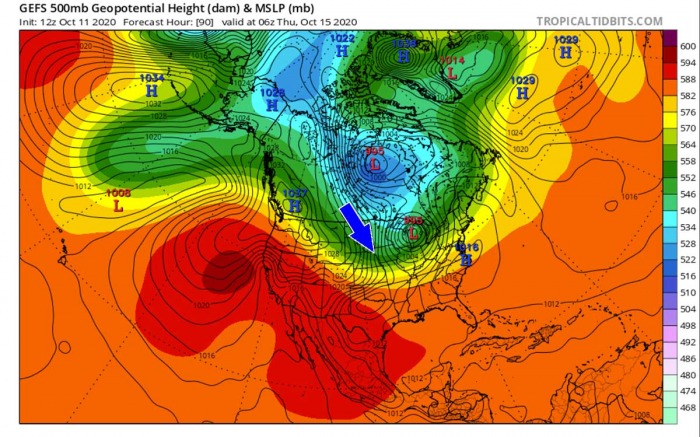 This normally leads to a formation of a more meridionally-oriented channel of cold advection from Arctic Canada towards the United States. Therefore, cold weather is forecast through mid-October.

A large pool of cold air mass will develop over central Canada on early Thursday, reaching the northern United States. With a well-established flow from the north-northwest, cold is forecast to spread further south towards the Midwest and Great Lakes region through Thursday.

By Friday morning, a much colder air mass will reach Texas and the northern Gulf coast already. Spreading also towards the East Coast. The cold air will have nothing to stop its progress further south, therefore spreading into Mexico and the Gulf through the early weekend is expected. 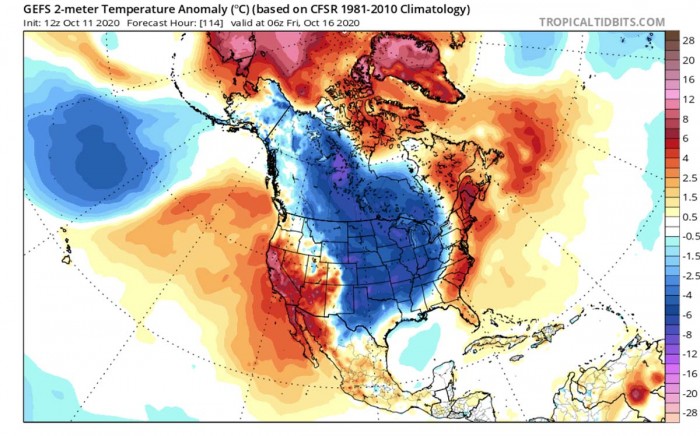 Here is the animation of this significant pattern change with much cold weather forecast to spread across Canada and the United States, graphics are provided by www.wxcharts.com.

Over the weekend days, Saturday and Sunday, a large part of Contiguous United States will be under much colder temperatures that are typically observed through mid-October. Roughly 5-8 °C below normal. Morning temperatures will be below freezing across the northern states.

Excluding the far western CONUS, the rest of the lower 48 will be under cooler temperatures. Including Florida, the Gulf Coast, and the Gulf of Mexico. 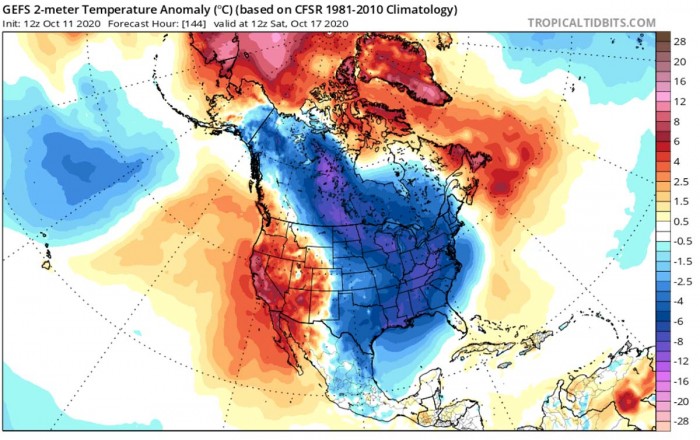 Mid-range model trends suggest this will be quite a significant pattern change, therefore, the cold is forecast to extend well into the following week. With such cold air mass spread across the United States, high-pressure will also establish. 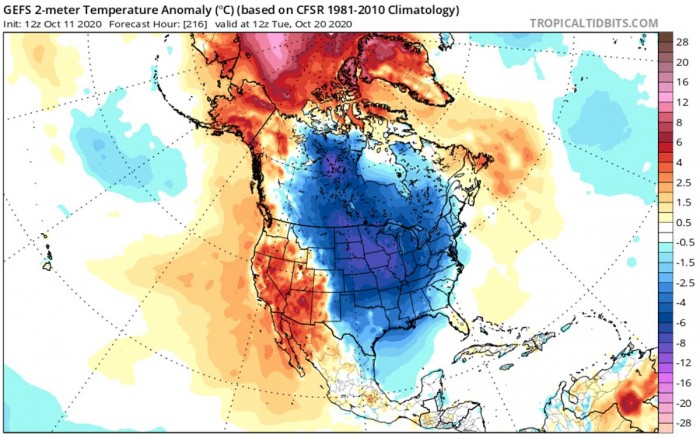 There are no big frontal systems forming behind Friday’s cold front due to the blocking high, centered over the eastern CONUS. And this also means the Gulf region can also take a breath from the tropical activity, at least for some time.

EXTREME WARMTH INTO THE ARCTIC

A developing pattern over North America (Canada and the United States) also lead to the formation of a very strong high-pressure system. Over the weekend, a powerful blocking high develops over the far North Atlantic and Greenland. 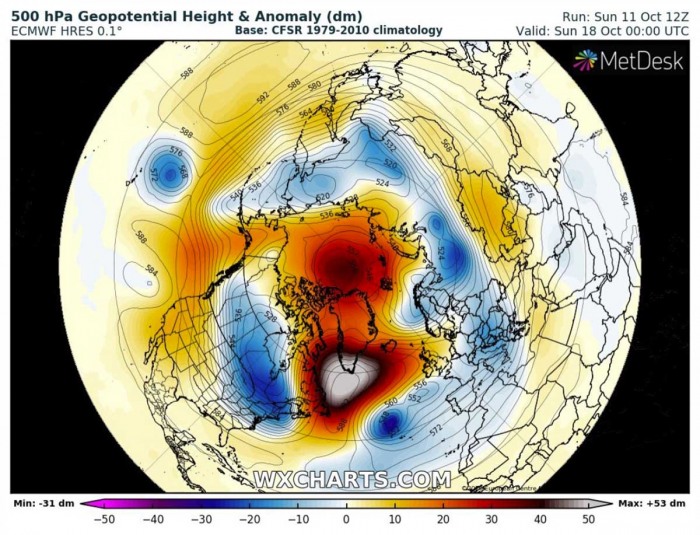 Its formation allows a strong warm advection beneath a strengthening North Atlantic ridge. Leading to extreme temperature anomalies – even more than 20 °C above normal. 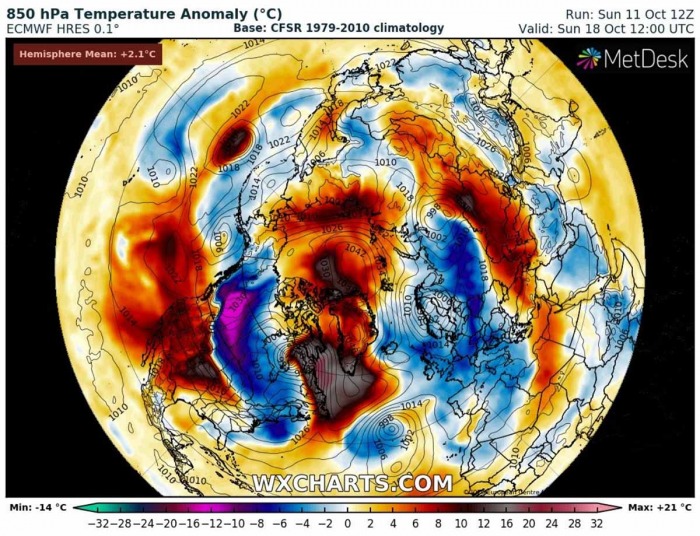 As the low continues deepening over eastern Canada and moves further north into Arctic Canada, the warm advection spread far north towards the North Pole. A strong high-pressure system establishes and extreme temperature anomaly extends into next week. 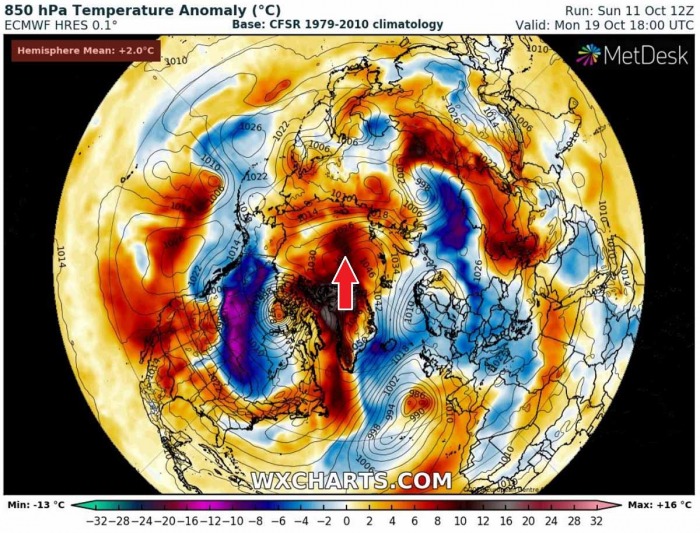