Millions are under winter storm warnings from Washington D.C. to Baltimore, Philadelphia, New York, Long Island, and Boston through Sunday evening as another dangerous winter storm will emerge tonight. A new Nor’Easter storm will blanket parts of the Mid-Atlantic and New England with locally some significant snow possible.

A new winter storm – Nor’Easter – will develop tonight with heavy snow expected across the Mid-Atlantic region on Sunday. Snow may be falling heavily at times along the I-95 corridor from Richmond and Washington D.C. to Philadelphia Sunday morning.

The system will race north and east bringing accumulating snowfall to the NYC metro area and southern New England by midday and continuing into the afternoon hours. 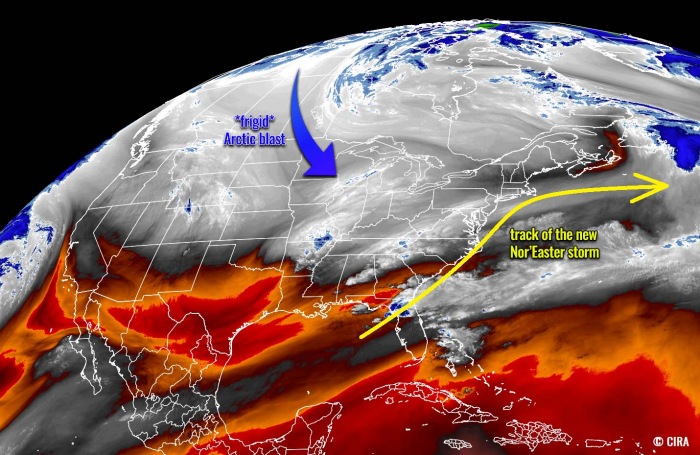 4-8 inches of snow is likely from the Appalachians across the city of New York area and the Long Island to Boston and further across New England. Even more across Nova Scotia and Newfoundland into Monday.

Snow will exit out to sea by Sunday evening with below normal temperatures surging in behind the departing winter storm on Monday. Expect hazardous travel conditions on Sunday with re-freezing of snow and ice on untreated roads and surfaces Monday morning.

FORMATION OF THE NOR’EASTER

A Nor’easter system is a synoptic-scale extratropical system forming in the western North Atlantic Ocean. As we could assume from its name, the winds affecting the coastal areas are generally from the northeast direction. Such storms originate as a low-pressure area that forms within approximately 100 miles of the shores between North Carolina and Massachusetts.

These lows are usually accompanied by heavy rain or snow and can cause significant coastal flooding, coastal erosion, and hurricane-force winds. When heavy snowfall develops over the land, extreme blizzard conditions emerge. Nor’easters often rapidly strengthen on the converging air masses — an Arctic cold air mass from the north and the warmer air over the water. 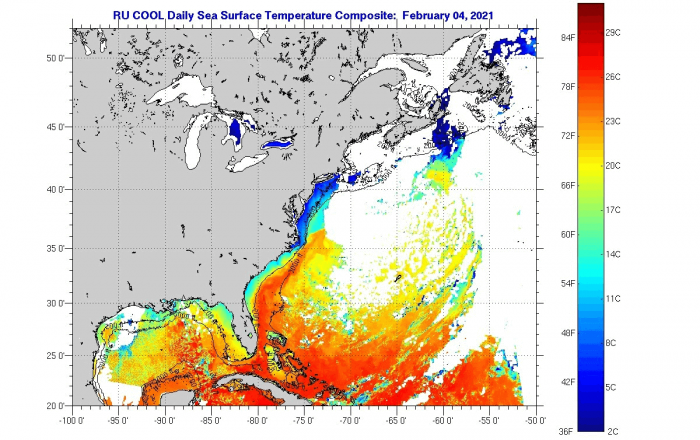 Nor’easters are more severe in winter when the difference in temperature between these air masses is the greatest. They tend to develop the most intense between the months of November and March, although they can also develop during other, non-winter months. The east and northeast parts of the United States are generally impacted by these systems a few times each winter.

Generally speaking, the Nor’easter develops in response to the sharp contrast in the warm Gulf Stream ocean current coming up from the tropical Atlantic and the cold air masses coming down from Canada.

In the upper atmosphere, the strong winds of the jet stream remove and replace rising air from the Atlantic more rapidly than the Atlantic air is replaced at lower levels; this and the Coriolis force help develop a strong cyclone.

Nor’Easters track northeast along the East Coast, normally from North Carolina to Long Island, then moves toward the area east of Cape Cod. 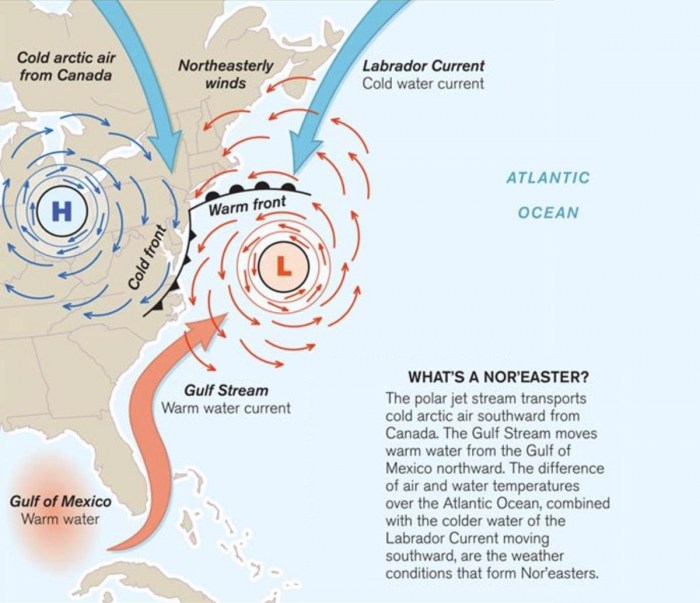 So this is exactly what has happened these days, a frigid cold Arctic blast spreads into the northern United States towards the East Coast, meeting with much warmer Atlantic. Tonight (Saturday night), their effect will lead to the formation of another surface depression along the Mid-Atlantic which is expected to deepen its central pressure below 980 mbar through Monday.

A strong Nor’Easter winter storm is expected to form and the weather models are forecasting quite a significant snow to accumulate – locally more than half-foot of snow could blanket the areas from eastern Pennsylvania across the city of New York to Boston.

Overnight, the wave of low pressure will strengthen along the Southeast coast with periods of snow breaking out across the southern Appalachians and southern Mid-Atlantic. By early Sunday morning, a Nor’Easter is expected to emerge and be somewhere near the North Carolina Outer Banks and its accompanying shield of snowfall will be positioned over the northern Mid-Atlantic. 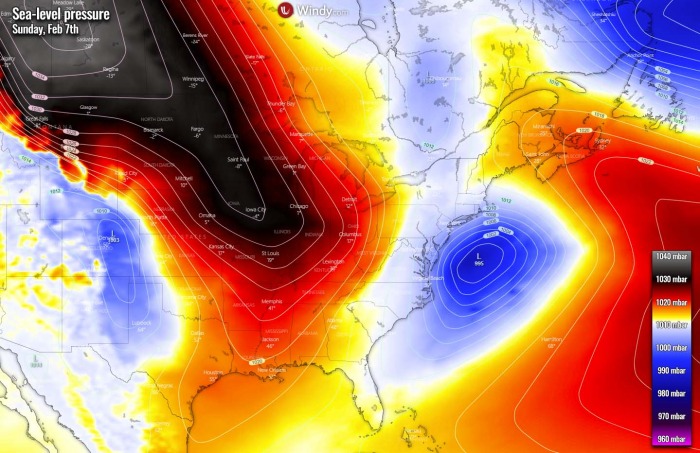 Heavy snowfall will develop across the busy corridor from Washington D.C., Baltimore, Philadelphia, New York, and Boston on Sunday. Another sizeable snow accumulation is likely, with locally close to 1/2 foot of snow over the next two days as the new Nor’Easter winter storm tracks along the coast this weekend. 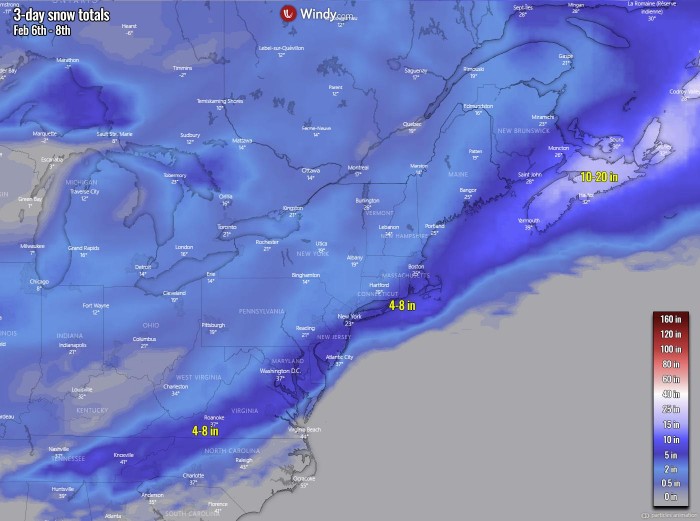 Meanwhile, further west-northwest, the most intense Arctic outbreak of the season is emerging across southern Canada and the northern tier of the United States. The air mass is becoming *frigid* cold, with life-threatening low windchills. Pushing as low as near -50 °F in places!

The Arctic air mass will be gradually expanding south and east across the country. And thanks to this new Nor’Easter storm, it will also expand into the East Coast and the Northeast US on Monday. 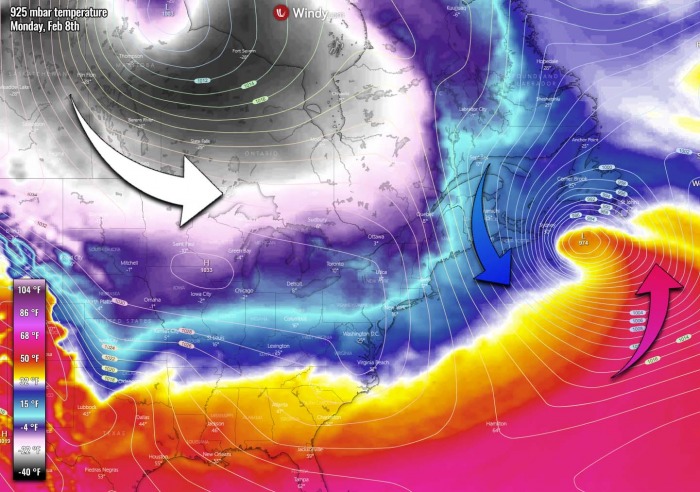 The attached chart indicates extremely cold air mass over Canada, with more than 30 degrees F below zero over Canada, touching the northern parts of the United States. But the worst is yet to come in the coming days (check back for our update on this matter later on).

WINTER STORM WARNING is in effect from 12 AM tonight to 12 PM as heavy snow expected. Total snow accumulations of 3 to 6 inches. 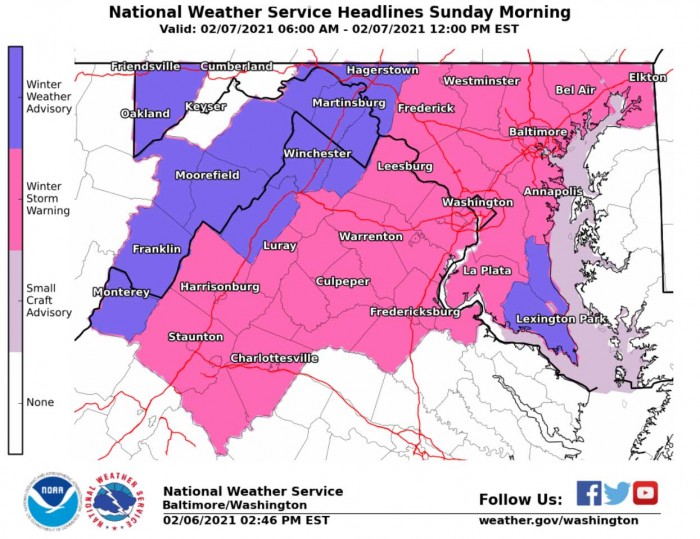 Snow will overspread the area between 1 AM and 3 AM overnight. The heaviest snow will be between 4 AM and 8 AM overnight into early Sunday morning. 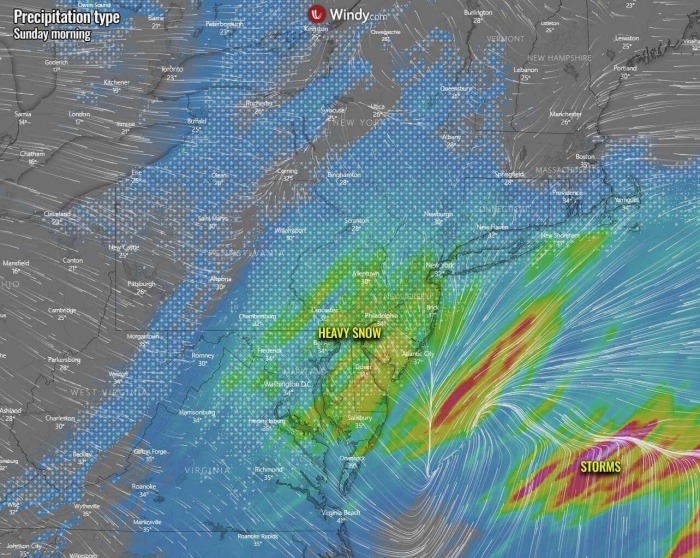 WINTER STORM WARNING is in effect from 4 AM to 7 PM Sunday as heavy snow expected. Total snow accumulations of 5 to 7 inches likely.

Plan on slippery road conditions. Snow, at times heavy, will overspread the area on Sunday morning, with snow potentially mixing with rain at times. Snow is expected to clear out from southwest to northeast Sunday afternoon.

WINTER STORM WARNING is in effect from 6 AM to 9 PM Sunday as heavy snow is expected. Total snow accumulations of 4 to 8 inches are likely. 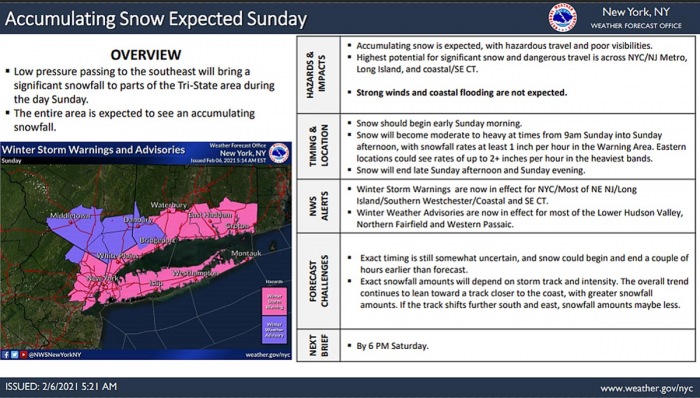 Snowfall rates around 1 inch per hour are expected for a period during the late morning and early afternoon. If heavier snow banding stays south and east of these areas, snowfall amounts would fall to the lower end of the forecast range.

Plan on slippery road conditions. If you must travel, keep an extra flashlight, food, and water in your vehicle in case of an emergency. 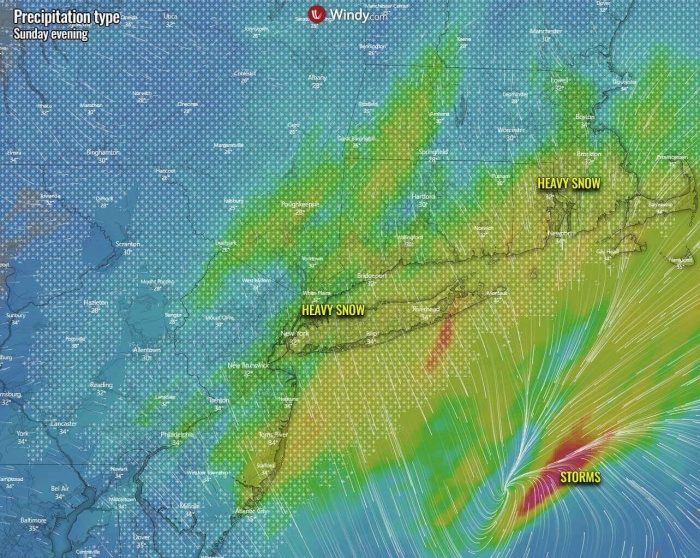 WINTER STORM WARNING is in effect from 7 AM Sunday to 1 AM Monday as heavy wet snow is expected. Total snow accumulations of 5 to 9 inches, except for the Outer Cape where only 1 to 3 inches of snow are expected. Winds gusting as high as 40 mph. 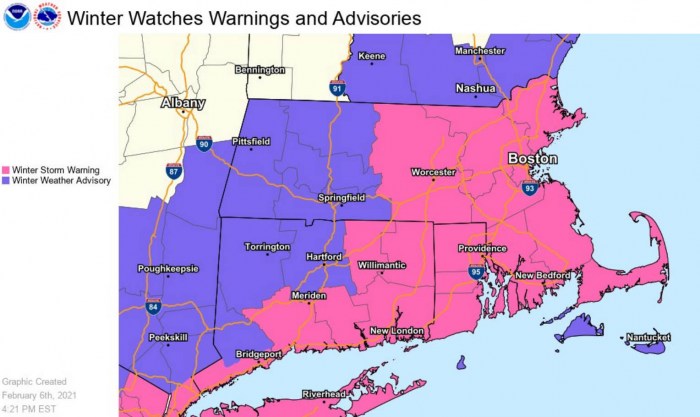 The heaviest snow is expected Sunday afternoon with 1 to 2-hour snowfall rates possible at times. Travel will be very difficult.

Rain may mix in at times, especially near the immediate coast and over Cape Cod. The Outer Cape is expected to see mostly rain. Snowfall rates could reach 1 to 2 inches per hour at times during the afternoon hours where mixing doesn’t occur.

LOW EXPLODES ON MONDAY, BLIZZARD FOR NOVA SCOTIA AND NEWFOUNDLAND

The Nor’Easter will be moving quite fast this time while traveling to the south of New England into Monday. Feeding with the warm Atlantic waters, it will be gaining additional strength and begin even more rapid intensification through the morning hours.

Likely to become a bomb cyclone once it tracks towards Newfoundland at that time as pressure should drop for nearly 15-20 mbar in about 12-18 hours. 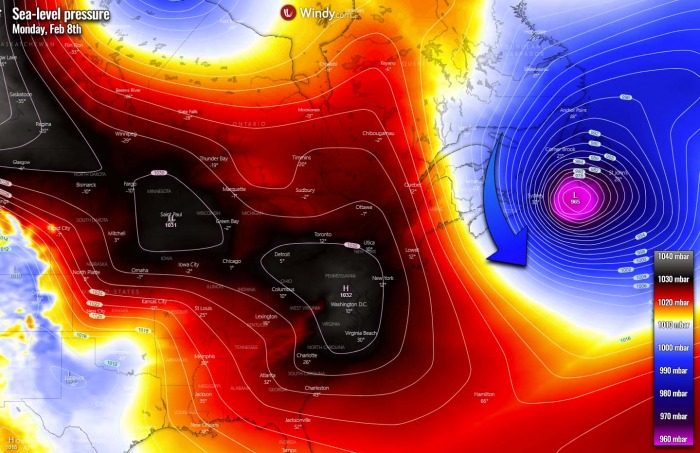 Very heavy snow will develop into Nova Scotia first through Sunday night into early Monday morning. Snowfall will be gradually spreading towards Newfoundland into the morning (daytime) hours. Due to the tight pressure gradient around the rapidly deepening center of the low, winds will increase. 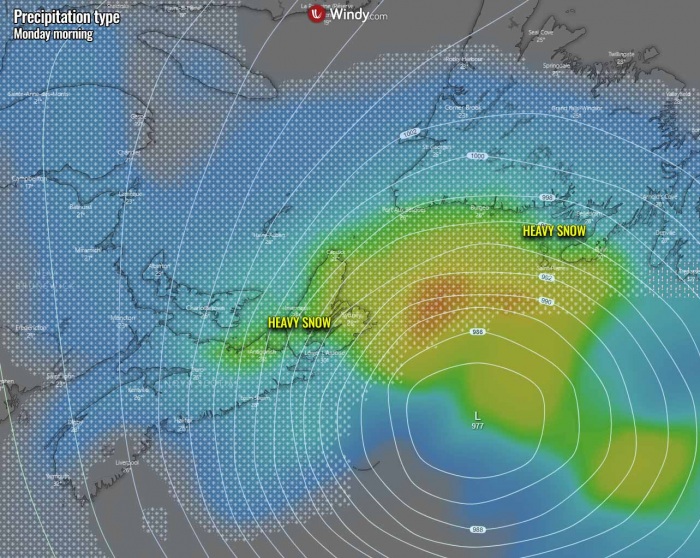 Dangerous blizzard conditions are expected, leading to complete whiteouts and potentially impassable roads in some areas. 10-15 inches of snow could accumulate, possibly even more locally. With huge snowdrifts.

Very cold, Arctic air mass will spread in the system’s wake across the Northeast United States.