A dangerous severe weather outbreak is expected on Thursday as a very dynamic upper-level wave moves across the Balkan peninsula. The ongoing extremely intense heatwave across the southeastern part of Europe and Turkey will end up with major severe weather over some Balkan countries and refreshment for Greece and its surroundings.

A powerful jet stream rounding the base of the trough will provide widespread forcing to support an explosive thunderstorm development within a strongly sheared and extremely unstable airmass. A volatile environment with severe weather outbreak of supercell thunderstorms is forecast, including tornadoes and very large hail.

There are two zones that are expected to see the most robust thunderstorms and in different timeframes. The earlier activity over the western Balkan countries will happen on Thursday morning, followed by widespread severe weather that is forecast for Romania, Bulgaria, and Moldova through the late afternoon and evening hours.

For this reason, two HIGH risks have been placed across the Balkan peninsula highlighting where the most dangerous severe weather threat is forecast to develop this Thursday. The threat also includes enhanced potential for strong tornadoes.

Above: Video animation of the convective storm’s development across Europe from Thursday early morning through the Friday morning, Aug 5th to 6th, 2021. 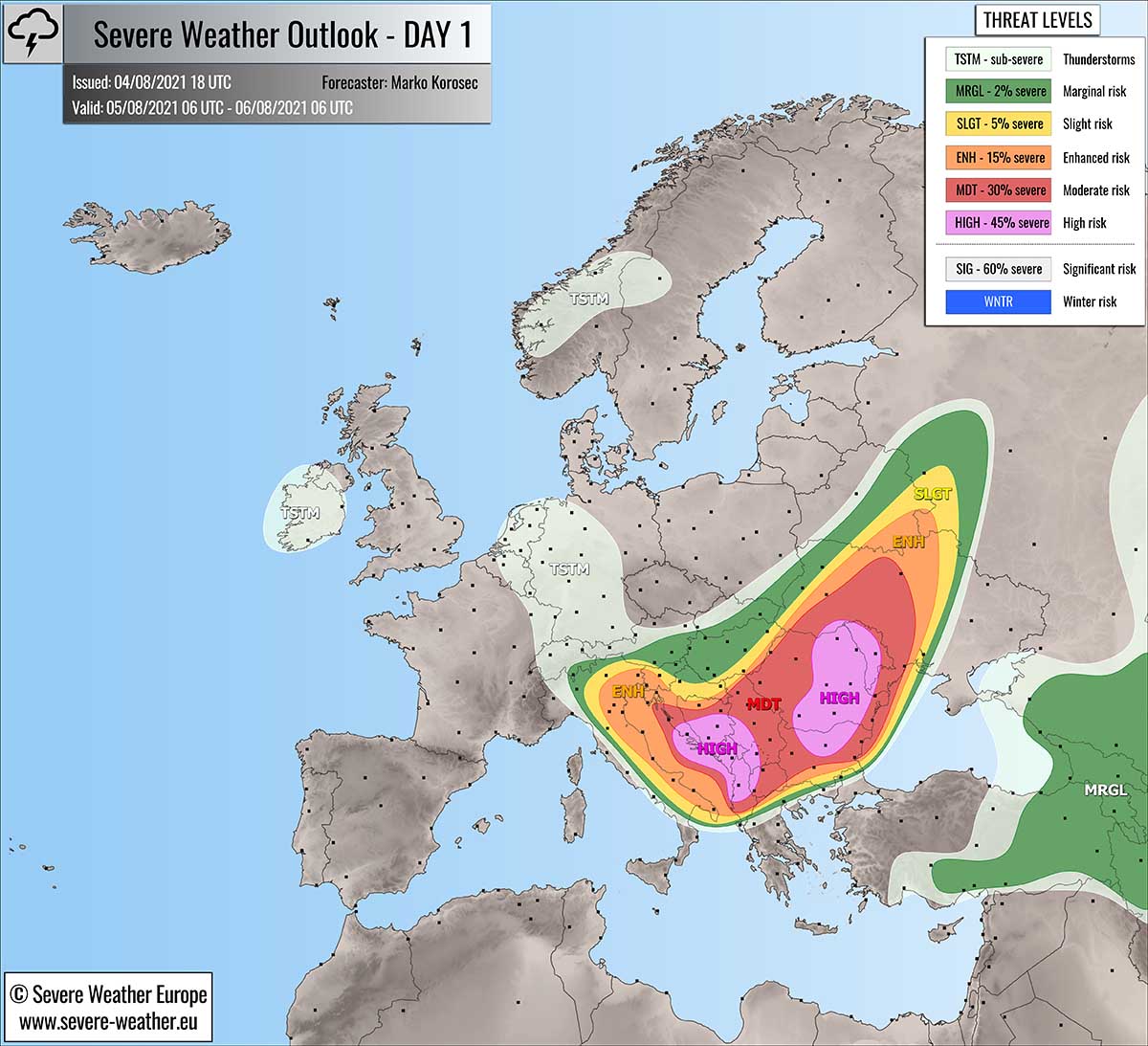 A rather deep negatively tilted trough is moving across central Europe and the Balkan peninsula on Thursday, with a widespread upper-level forcing to support dangerous weather development. Another deep trough is moving into western Europe from the Atlantic.

At the surface, a surface low with an associated well-defined frontal system rapidly moves across the central Balkan peninsula.

Another front enters western Europe with the emerging upper trough and surface depression into Ireland. 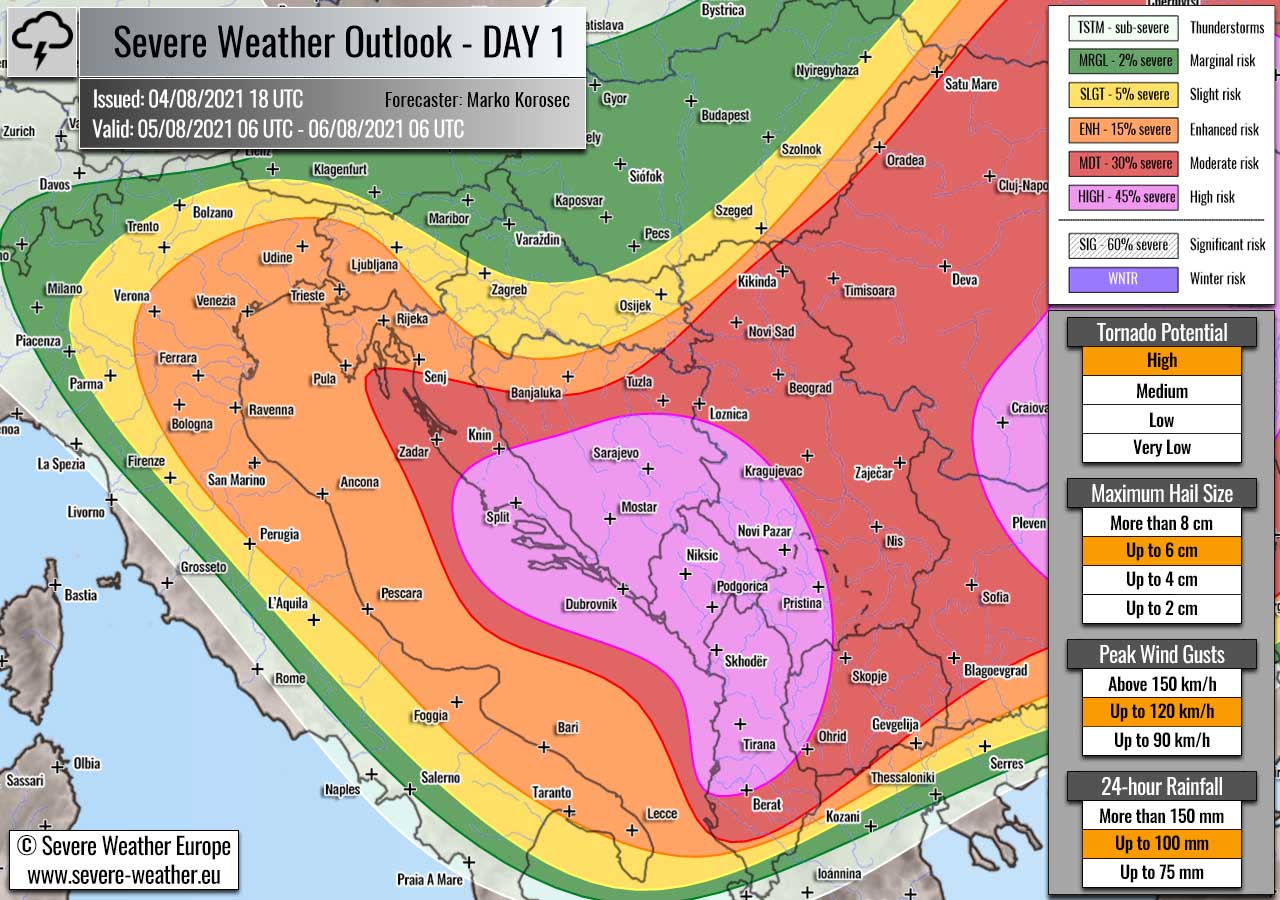 MDT/ENH risks have been issued for areas surrounding the HIGH risk area including western Croatia, northern Bosnia, most of Serbia, western Slovenia, and parts of Italy, Albania, North Macedonia and northern Greece with a threat for severe winds, large hail, torrential rainfall, and some tornado threats. The expected storm coverage is forecast to be lower than inside the highlighted purple risk area.

Ahead of an emerging frontal system from the west, strong southerlies are advecting very high moisture across the central Mediterranean towards the Adriatic Sea. This is resulting in extremely unstable air mass with MLCAPE even exceeding 4000 J/kg in the southern Adriatic and the Ionian Sea.

At the same time, ample wind shear in order of 40-50 knots is also overspreading the region, thanks to the increasing jet stream aloft. A strong forcing develops near the left-exit region of the jet.

A combination of both strong shear and extreme instability will lead to a volatile environment with the explosive development of severe thunderstorms in the morning hours on Thursday. The activity might already start before daylight, thanks to the progressive nature of the emerging frontal system.

Supercell thunderstorms are expected as a primary mode, as well as training multicell storms with potential flash floods threat. They will rapidly become severe with threats for very large hail and tornadoes, as well are severe damaging winds and torrential rainfall.

While the coverage of storms remains a bit unclear, the conditions in place are hinting at very significant risk for dangerous severe weather that is forecast within the HIGH risk area. Very strong shear in the lowest levels is also a concerning threat for tornadoes along the southeastern Adriatic coast.

Even a strong tornado cannot be excluded given the pretty strong south-southeasterly winds along the southeastern Adriatic coast, roughly from southern Dalmatia region, Croatia, and farther south along Montenegro to the Albanian coast.

Further west across the rest of Adriatic, eastern and northern Italy, as well as northwestern Croatia and west-central Slovenia, more isolated nature of severe thunderstorms, is forecast. Storms will primarily deliver very heavy rain with flash floods potential due to very high moisture in place.

Supercells will also be possible in these areas as well and could bring some large hail and severe winds. Although low-level shear will be less defined outside the most dangerous risk area, some tornado threats could also develop with the strongest supercells.

Waterspouts are also possible over the Adriatic Sea.

Thunderstorm activity will be gradually moving from northwest to southeast through the morning hours and spreading farther inland into central and southern Balkan peninsula countries while at least some upscale growth. Lower instability, but remaining strong shear should support less intense storms than within the purple risk area. 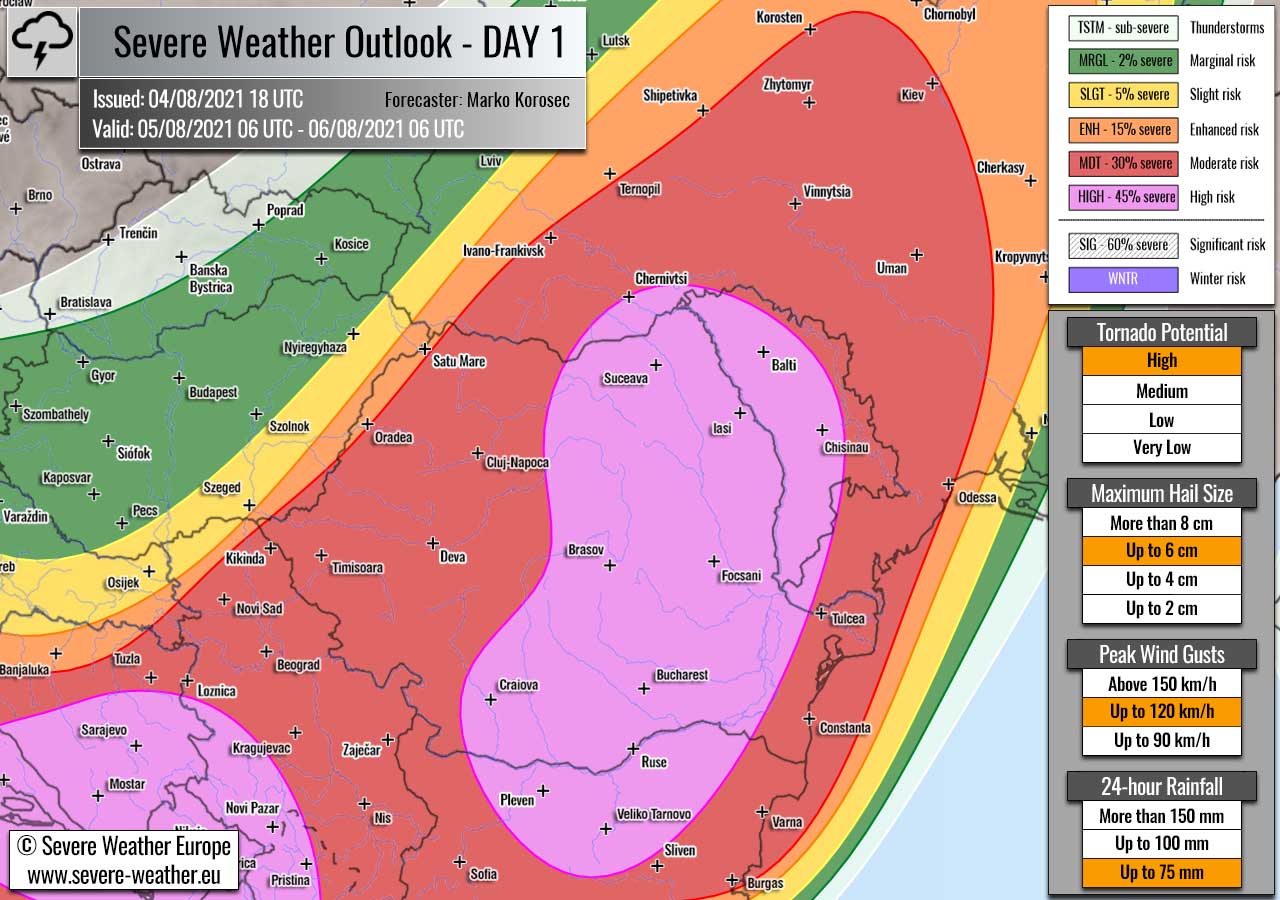 HIGH risk has been issued for eastern, central and southern Romania, northern Bulgaria, and Moldova into southern Ukraine with a threat for severe destructive winds, large to very large hail, torrential rainfall with flash floods and tornadoes, potentially strong.

MDT/ENH risks have been issued for areas surrounding the HIGH risk area including the rest of Romania, Bulgaria, southeast Hungary, Moldova into central Ukraine with a threat for severe winds, large hail, torrential rainfall, and tornadoes. The expected storm coverage will be lower than inside the highlighted purple risk area.

A very dangerous weather setup is forecast to be in place across the southeastern part of the Balkan peninsula, especially across Romania. The region has been strongly overheating in recent days, thanks to an intense heatwave centered farther south.

With the arrival of the surface low into the central Balkan peninsula, low-level winds will significantly intensify across Bulgaria and southern Romania. Resulting in rapid moisture return into the plains from the very warm Black Sea.

This will result in very high instability in order of 2000-2500 J/kg of MLCAPE, possibly even more across the eastern Romanian plains. The environment will become conducive for the explosive development of isolated to scattered storms from the mid-afternoon hours onwards.

The near-ideal position of the powerful upper-level jet aloft also provides a strong divergence and forcing for widespread convective activity. With a wind shear of around 50-60 knots, thunderstorms will rapidly become supercellular.

Those will be posing an immediate threat for very large hail, destructive winds, and torrential rainfall with flash floods. While the main concern is the textbook curvature of the hodographs across the Romanian plains. Intensifying southeast near-surface winds will significantly enhance the low-level shear and helicity within the very moist air mass advecting from the Black Sea.

Some of the storms could rather quickly become tornadic with well-developed low-level mesocyclones. 0-3 km storm-relative helicity in order of 300+ m^2/s^2 should be more than sufficient to support a strong tornado threat as well. Especially across the eastern portions of the HIGH risk area.

Supercell thunderstorms will be long-tracked and travel across the highlighted area towards east-northeast, thanks to a strong shear in place. They could also develop bowing segments prior to the upscale growth and merging occurs.

HIGH risk was also extended further south into Bulgaria as a few intense supercells with destructive threats could also develop there. As conditions and all the potential threats remain similar across Romania, the highest risk seems warranted.

Scattered thunderstorm activity should well extend into the evening and early night hours as conditions remain in place. Thunderstorms will gradually merge into a larger MCS (Mesoscale Convective System) which will be tracking east-northeast ahead of the moving cold front.

While isolated very large hail and torrential rainfall will result, the primary threat in the nighttime will be severe destructive wind gusts along the leading edge of the intense line of storms within the MCS.

Activity is likely to continue into the Friday early morning hours as it spreads towards northeast into Moldova and Ukraine.

MRGL risk has been issued for eastern Turkey into Georgia, Armenia and southwestern Russia with threat for isolated severe storms, capable of producing marginally large hail, and severe winds.

Mostly diurnal driven thunderstorms are forecast to develop within moderately unstable and weakly sheared environment. Some storms could be better organized and provide some larger hail and severe winds locally.

TSTM risks have been placed across central Turkey, eastern Black Sea, parts of Germany into Benelux where daytime driven thunderstorms are also possible. But limited shear should keep them sub-severe.

TSTM risk has been placed across Ireland and part of northern Ireland where some thunderstorms are also possible. But limited instability within moderate sheat should keep them sub-severe.