After a widespread severe weather outbreak across central and eastern Europe this weekend, the frontal system is now emerging into the Baltic region this Monday, August 2nd. Very strong shear and moderate instability should provide another robust environment for organized supercell storms.

Supercell storms could bring tornadoes, severe damaging winds, torrential rainfall, and large hail. An MDT risk has been issued across northern Ukraine and Belarus into northwestern Russia where the most dangerous severe threat will develop.

Scattered severe storms are expected to form in the early afternoon as the environment destabilizes ahead of the northeastward surging cold front. Bowing segments are possible with locally destructive winds, including tornadoes.

Another focus is the favorable environment across the northern Mediterranean where an ENH risk has been issued for the North Adriatic region to cover areas with the highest potential for some severe storms through the afternoon and evening hours.

Above: Video animation of the convective storm’s development across Europe from Monday early morning through the Tuesday morning, Aug 2nd to 3rd, 2021. 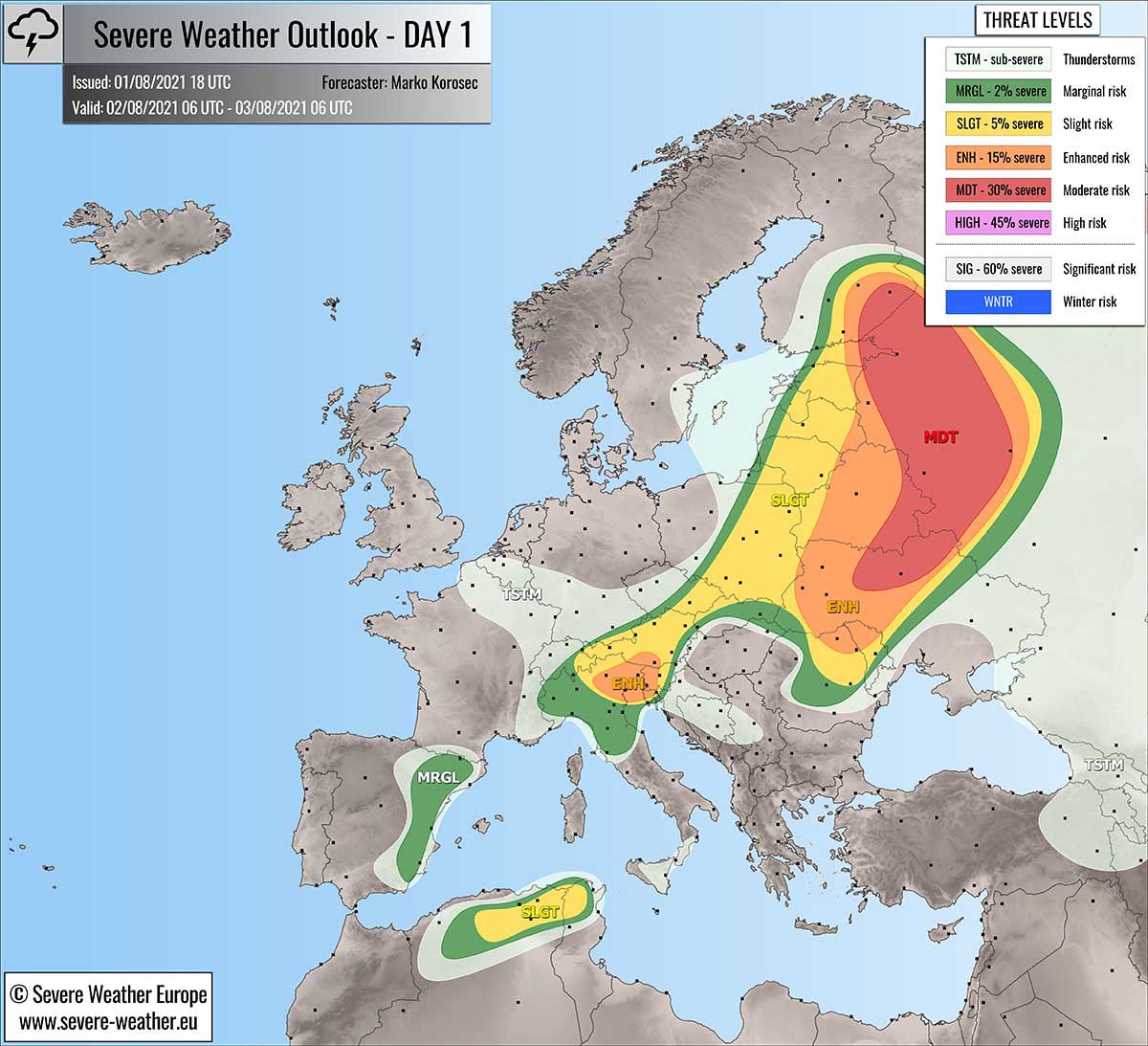 A progressive pattern continues across Europe also into early this week, and has already produced a 2-day severe weather outbreak this weekend. First across central Europe and the Alps on Saturday and again across central and eastern Europe on Sunday.

On Monday, a deep core of the trough is moving over Scandinavia and the Baltic region, with a significant upper-level forcing spread across northeastern Europe into northwestern Russia.

To the south, a strong upper High persists across far southeastern Europe, resulting in a record-challenging extremely intense heatwave over the southern Balkan peninsula. Temperatures could possibly push to around 47 °C early this week.

At the surface, a frontal system with a sharp cold front is moving east-northeast across eastern Europe, extending from the deep surface cyclone centered over the Baltic region towards southwest Balkan peninsula. Another front is also moving east in the wake of the main frontal system in Monday. 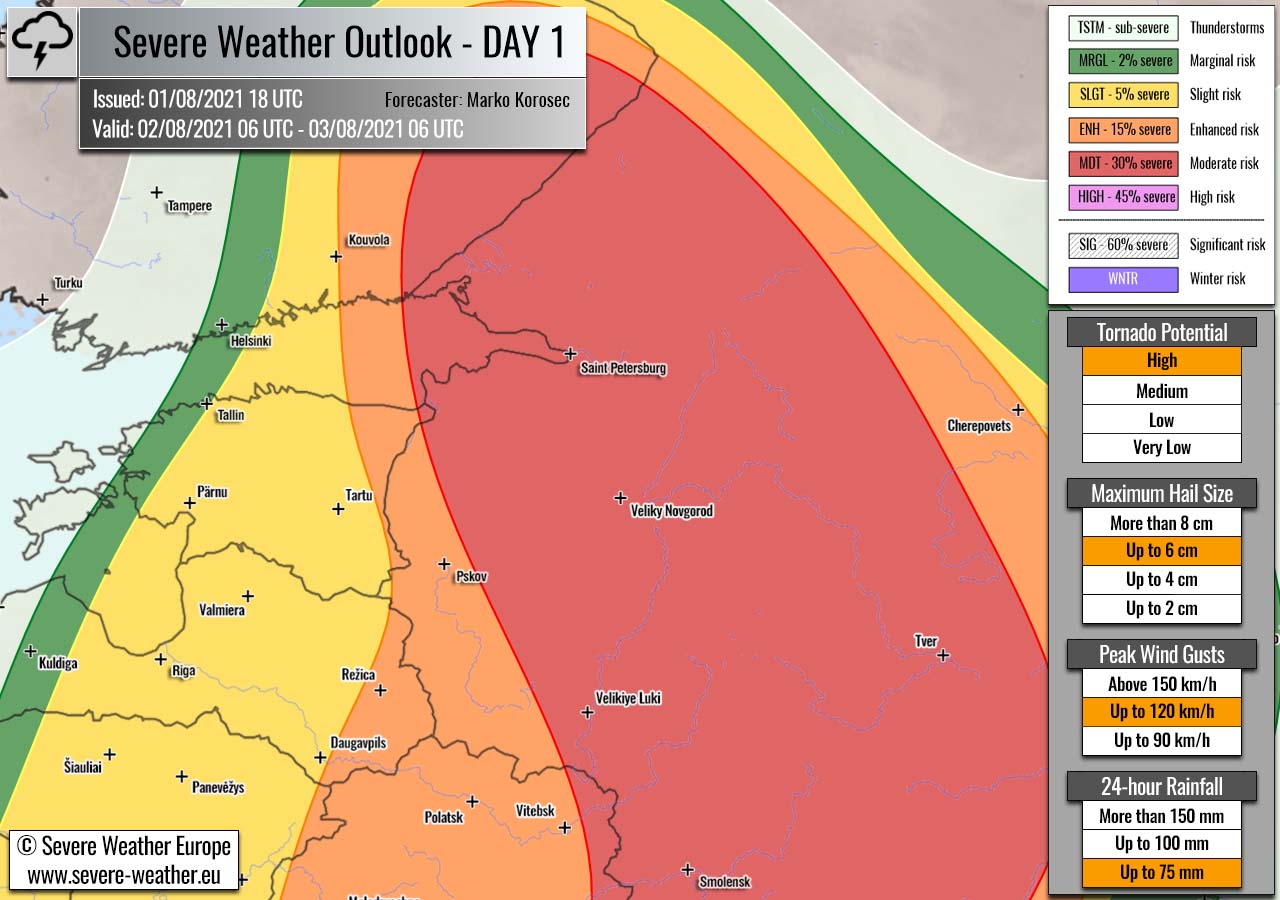 MDT/ENH risks has been issued for southeast parts of Finland, eastern Estonia, Latvia into Belarus and Ukraine with a threat for tornadoes, severe damaging winds, large to very large hail, and torrential rainfall.

SLGT risk have been issued for areas surrounding the MDT/ENH risks area including most of Estonia, Latvia, Lithuania, eastern Poland and west-central Ukraine with a threat for severe winds, large hail, torrential rainfall, and some tornado threats. Expected storm coverage will be lower than inside the highlighted MDT risk area.

Remnants of the overnight large convective cluster will continue towards the northeast on Monday morning, delivering a lot of rain in some areas to the immediate west of the MDT/ENH risk areas. The air mass ahead and east of the system will quickly destabilize during the day as heating combined with strong warm advection from the south provides ample instability.

Rather strong wind shear is in place across the highlighted areas and favors organized severe storms to develop once the initiation takes place by early to mid-afternoon Monday. Around 1500 to locally 2000 J/kg of MLCAPE, combined with 40-50 knots shear should be more than sufficient for scattered supercell thunderstorms to develop.

Wind shear is also quite strong in the lowest levels, hinting that a tornado potential could become a serious issue with any storm that forms inside the MDT risk area, especially closer to the surface low on the north. Best low-level shear and instability will overlap across northwest Russia. Therefore, tornadic supercells are well possible in this corridor.

Activity will become more widespread into the late afternoon hours as upper-level forcing increases further, storms will likely grow upscale into a large MCS cluster and continue tracking northeast. The primary threat is then severe damaging winds and wind-driven hail along the leading edge of the cluster.

The mesoscale convective system will continue into the evening and early Monday night hours into northwestern Russia and gradually vanish into early Tuesday morning. A lot of rain with flash floods threat is locally possible. 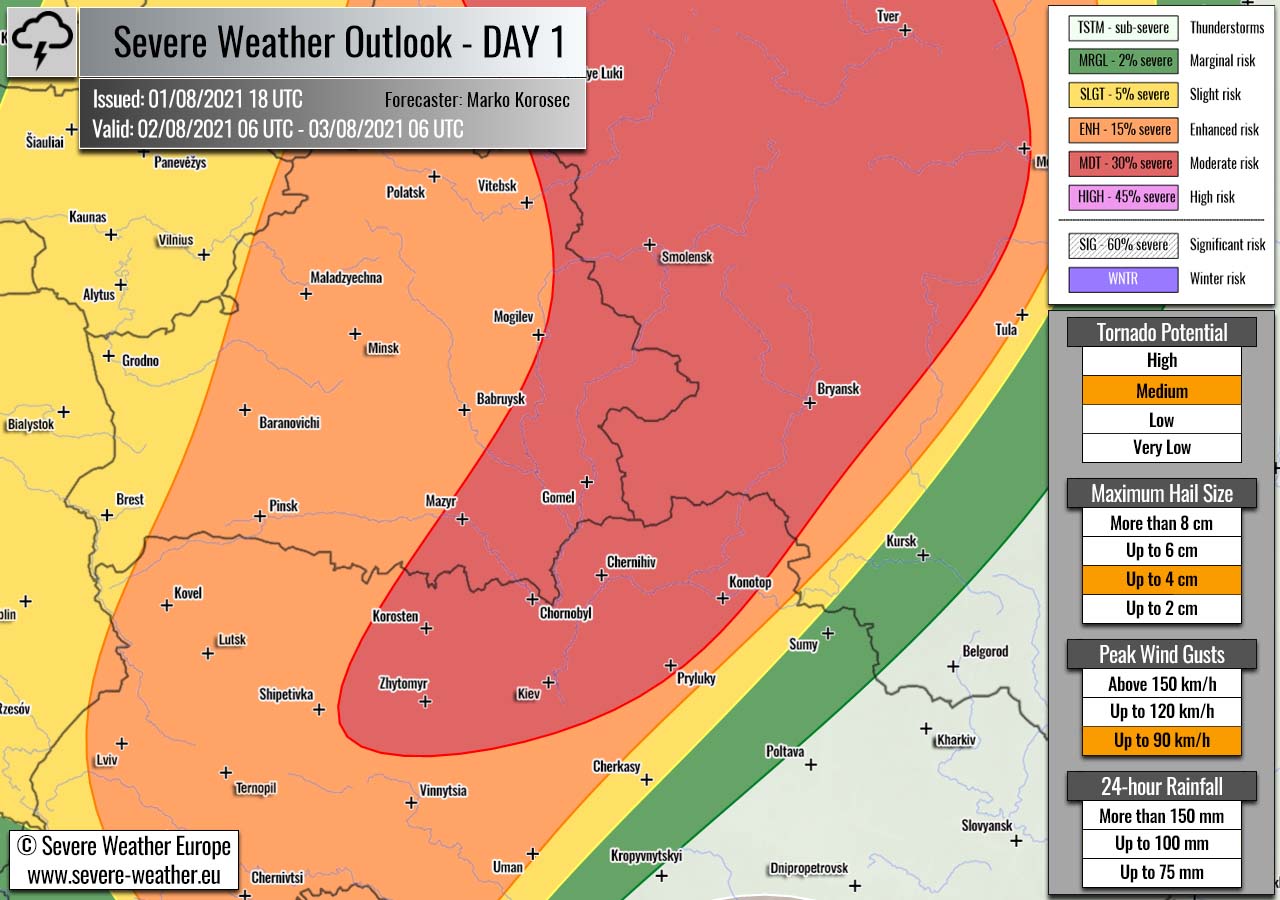 Although storm coverage should be lower than across the northern portions of MDT/ENH risk areas, ample instability combined with moderate shear should support organized discrete supercell thunderstorms during the afternoon and evening hours.

Storms could eventually merge into a larger system towards the evening hours, tracking east with the moving cold front. Isolated very large hail and severe wind gusts are likely with the most robust supercell storms in these areas.

Activity is likely to continue into the Monday night hours but gradually diminish as instability vanishes overight.

ENH/SLGT risks have been issued for northeast Italy, west-central and northern Slovenia, most of Austria and northwest Croatia with a threat for severe storms, capable of producing large hail, severe winds, and low tornado threats.

Located under the northern fringe of the strong jet stream, parts of the northern Mediterranean should see additional severe thunderstorms through Monday afternoon and evening hours.

MLCAPE with around 2000 J/kg in some places should, together with around 40 knots of deep-layer shear promote supercell thunderstorms, with large hail, torrential rainfall, and severe winds.

Although much lower than over the weekend, a tornado threat is still possible with the most organized storms given an enhanced low-level shear and LCLs pretty low in the region. Air mass remains unstable and moist, and storms should lead to locally very high amounts of rain.

The strongest storms could bring some larger hail up to 4cm in diameter and severe winds. Thunderstorm activity could also continue into the early night hours as forcing remains strong.

Another issue with storms this Monday is also much lower storm motion than over the weekend, so torrential rain and flash floods could be another threat locally. 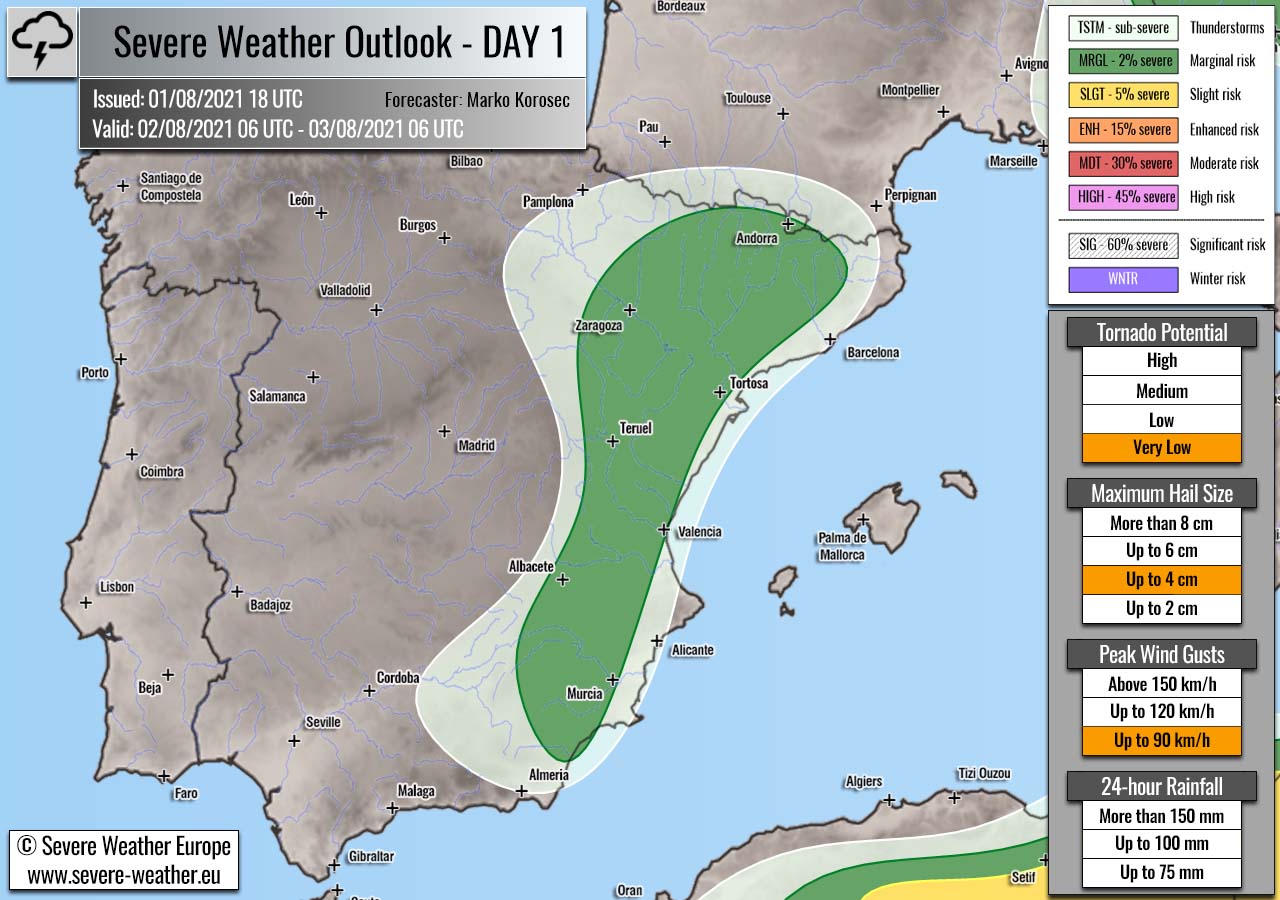 MRGL risk has been issued for eastern Spain with a threat for isolated severe thunderstorms, capable ob producing large hail and severe winds.

Moderate shear and instability should help to organize storms as they are triggered by local topography in the afternoon hours, supported by enhanced forcing under the strong jet stream aloft.

Given the somehow conditional threat for storm coverage, SLGT risk is not warranted at the moment. But the most organized storms could still produce large hail and severe winds.

+++ Weather forecast for Algeria and Tunisia +++ 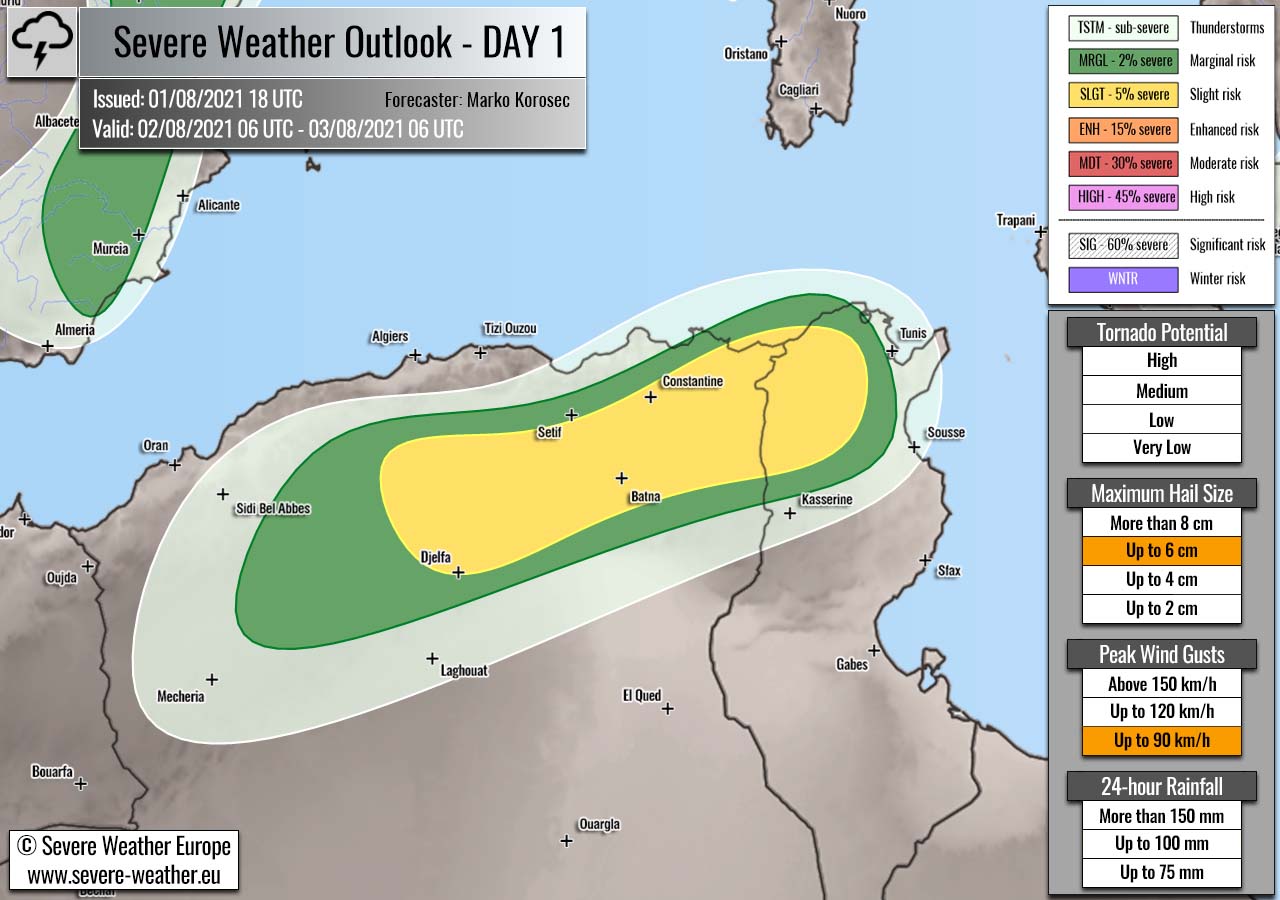 SLGT risk has been issued for northern Algeria into Tunisia with an isolated threat for severe thunderstorms, capable ob producing large hail and severe winds.

Strong capping is often an issue over the region but at least some potential exists that a few organized storms could develop. As the coverage could be large enough, SLGT risk was issued to cover areas with the highest potential.

Moderate shear and rather strong instability would favor supercells with large hail and severe damaging winds.

TSTM risks have been placed across southern Germany, Benelux, Sicily, western Balkans, far southeast Sweden and the Baltic Sea, as well as northeastern Turkey into Georgia where daytime driven thunderstorms are also possible. But limited shear should keep them sub-severe.