A tandem of two tropical storms – Paulette and Rene, is ongoing in the central Atlantic. Both are expected to become hurricanes over the weekend. The main feature of interest is a Tropical Storm Paulette, which could impact Bermuda as a dangerous hurricane on Monday and Tuesday.

September 10th is generally considered to be the climatological peak of the Atlantic hurricane season. And the activity over the Atlantic has yet again ramped up.

Currently, there are a number of tropical disturbances ongoing and may impact land areas in the coming days. While the westernmost waves over the Bahamas and the Gulf of Mexico are unlikely to strengthen significantly, both could bring heavy rain and floods while moving west. 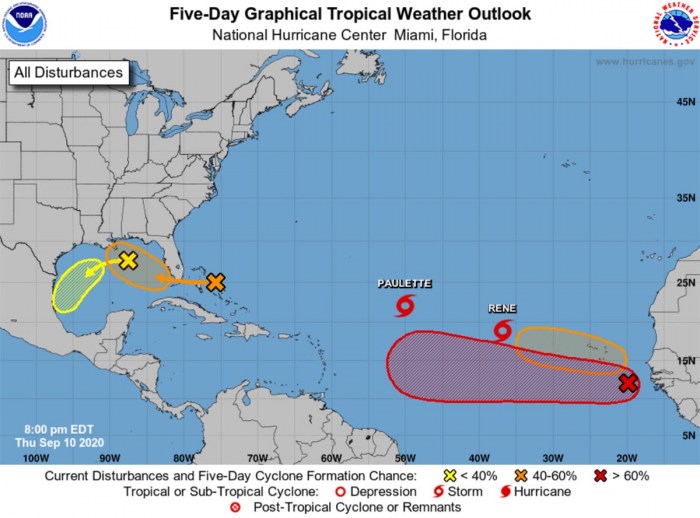 Tropical Storm Paulette is packing the maximum sustained winds of 45 knots (50 mph) and central pressure around 997 mbar. It is gradually moving northwest across the central Atlantic.

Paulette has lately been struggling with a relatively high wind shear of 20 – 40 knots from an upper-level trough to its west. The concerning thing is that, although the wind shear should temporarily weaken the storm on Friday, shear decreases again over the weekend. 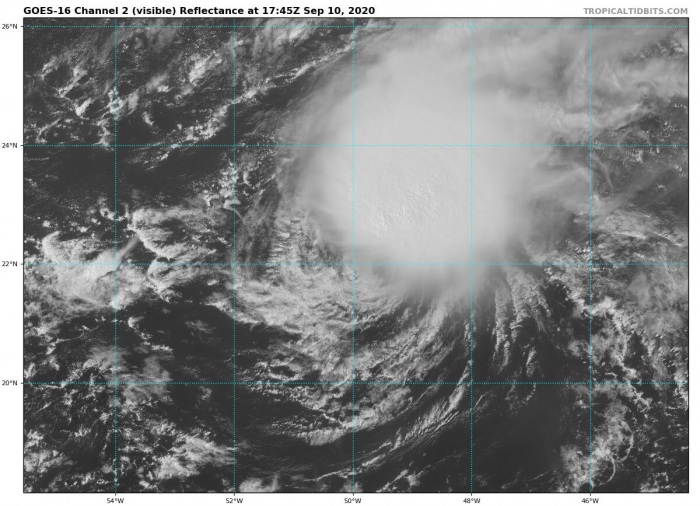 This then means Paulette is expected to intensify again and become a hurricane while moving towards Bermuda. It is still uncertain if the storm makes landfall over Bermuda, but it seems its trajectory comes very close so the impact could be severe.

And there are now only 4 storm names left that have been reserved for the Atlantic hurricane season 2020. 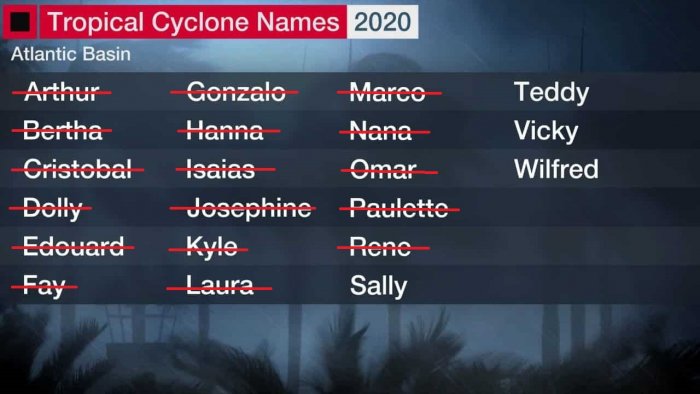 As the tropical storm Sally is quit likely coming soon, we will probably be seeing another year when the use of Greek alphabets will be needed.

The Atlantic hurricane season normally lasts from June through November when hurricanes usually form in the Atlantic Ocean. For now, there were 18 tropical depressions already.

17 of those were named storms, including 5 hurricanes and 1 major hurricane. Out of 10 named storms which is the long-term average.

The strongest storm this year was hurricane Laura which made landfall in Louisiana.

Satellite imagery reveals that continuous bursts of explosive deep convection have been ongoing to the north and northeast of Paulette’s center of circulation. See an impressive animation of textbook separation of convection and system’s center below.

Tropical Storm Rene is visible on the bottom right as well. 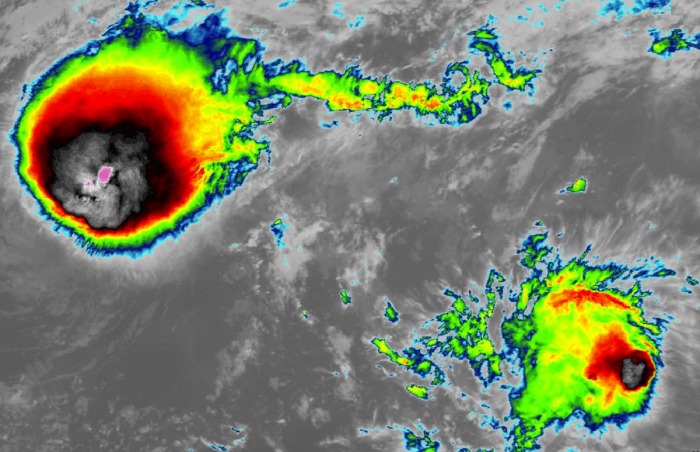 As seen by the water vapor satellite, upper-level outflow ventilation across the northern and eastern portions is quite healthy. While the impact of strong shear is well visible to the south and west of the main convective cluster. 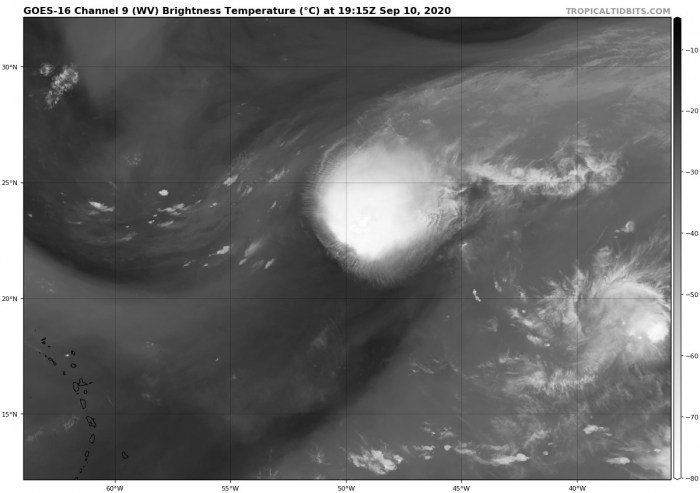 Potential for hurricane threat to Bermuda

The wind shear is expected to be the strongest tonight (Thursday night) which should cause Paulette to weaken a bit over the next 24 hours. As wind shear decreases below 20 knots again on Saturday, a gradual re-strengthening is forecast to begin. 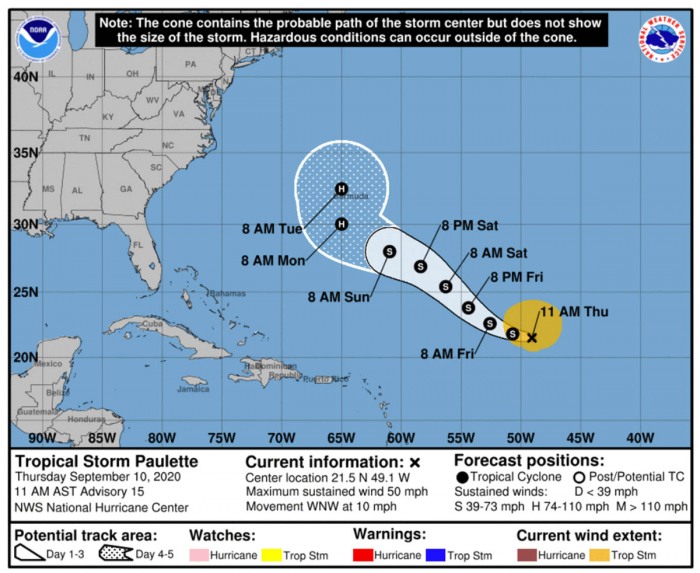 Models suggest the intensification could be quite fast, as both low shear and very favorable oceanic conditions are along its future path. Paulette will become a hurricane on Sunday and continue intensifying while moving towards Bermuda. 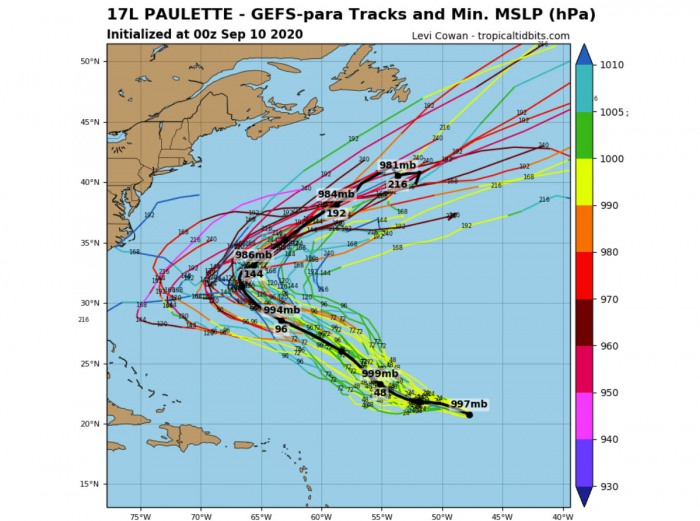 Some models are hinting Paulette could intensity to near Category 2 strength right at the time when it passes near Bermuda on Tuesday. 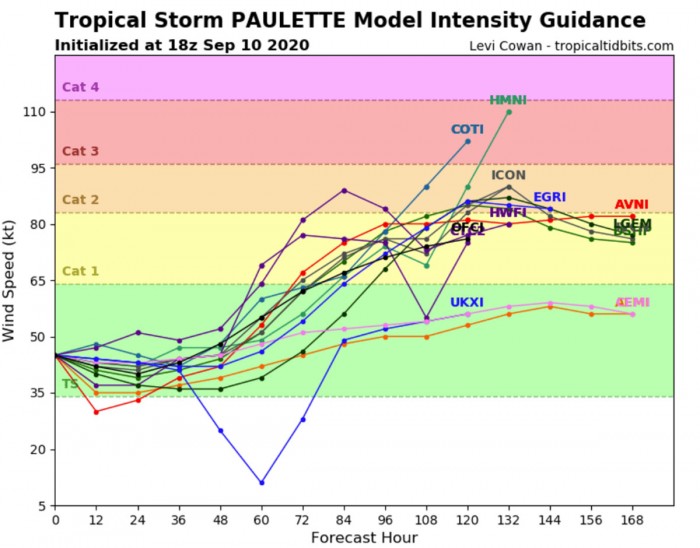 The most likely arrival of tropical-storm-force winds to Bermuda is from Sunday afternoon into Monday morning. It indeed depends on the exact track after Paulette begins strengthening as a hurricane on Saturday. 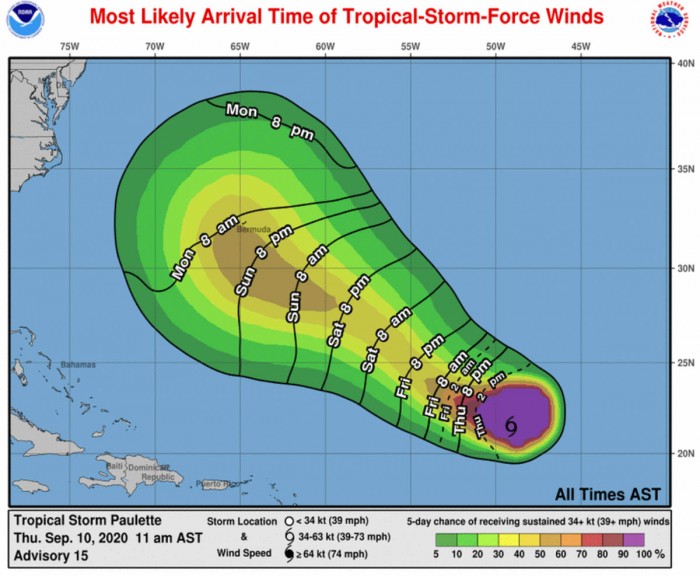 Here is the satellite animation of a Tropical storm Paulette ongoing in the Central Atlantic. It is expected to become a hurricane and impact Bermuda next week.

Notice also there is potentially another storm – Sally – moving into the Caribbean mid next week.

Once Paulette becomes a hurricane, it will begin moving more north-northwesterly. On late Sunday, it is expected to curve towards the north and approach Bermuda. It will also expand in size while passing very near or over the islands on Monday and Tuesday, as seen by the Ventusky wind swath chart. 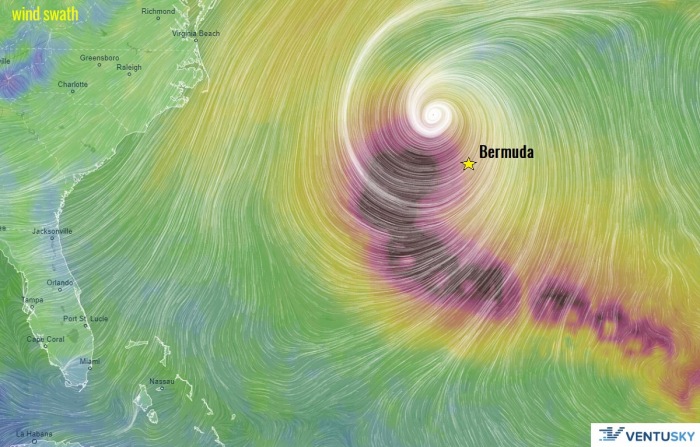 Beside winds and storm surge, another concern could be torrential rainfall and flooding threats. The amount of rainfall to Bermuda strongly depends on where the center of the hurricane will travel.

If the pass will be to its immediate west, the impact would be severe. 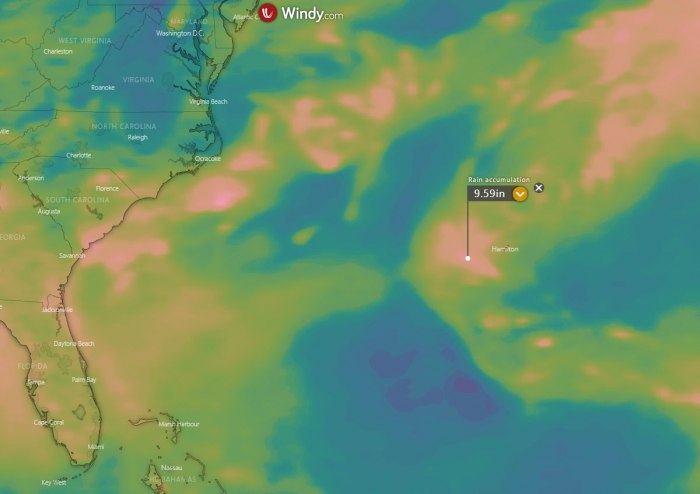 Rene and the upcoming Sally

The second Tropical Storm Rene is located to the southeast of Paulette and is also similar strength of around 45 knots (50 mph). It is likely to become a hurricane on Saturday as well. 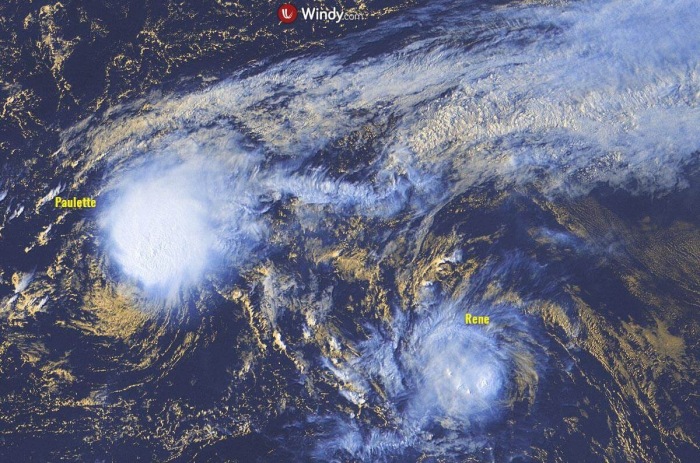 Another tropical wave is emerging along the coast of West Africa today. The system is expected to gain strength in the coming days and become a Tropical Storm Sally.

Read more about: Could Sally be the next potentially strong Atlantic tropical storm?

Bermuda is often in the path of hurricanes

Bermuda (the Islands of Bermuda) is a British Overseas Territory in the North Atlantic Ocean. It is located around 1000 km (650 miles) of the closest land, east-southeast of Cape Hatteras, North Carolina.

Bermuda’s climate is subtropical, having quite chilly but generally mild winter temperatures. The island is warmed by the nearby Gulf Stream and low latitude.

Bermuda is often directly in the path of hurricanes recurving in the westerlies, although they usually begin to weaken as they approach the islands.

The most recent hurricanes to cause significant damage to Bermuda were category 2 Hurricane Gonzalo on Oct 18th, 2014, and category 3 Hurricane Nicole on Oct 14th, 2016. Gonzalo and Nicole both made a direct hit to Bermuda.

The last major hurricane which hit Bermuda prior to Gonzalo and Nicole was Hurricane Fabian on Sept 5th, 2003.

Paulette is expected to become a hurricane while approaching Bermuda. The system may impact the islands as a dangerous hurricane on Monday and Tuesday.

Given the still 5 days in advance, the exact details of Paulette’s track and its intensity is still uncertain. But there is an increasing threat for severe winds, storm surge, and torrential rainfall on Bermuda early next week.

Still, basically none of the global models are hinting the potential for Paulette turning or making landfall in the U.S. East Coast. Therefore, Bermuda appears to be the only land that could see the landfall or very close pass of Paulette next week.