Typhoon Chan-hom is now a strong typhoon, gradually turning towards mainland Japan on Thursday. The forecast track suggests its center will remain off Japan, but its effect will bring severe winds and rainfall/flooding threat to the country.

According to the Japan Meteorological Agency (JMA), Chan-hom is the year’s 14th typhoon in the Western Pacific region.

The system is located in still-favorable oceanic conditions, so some additional strengthening is possible until Thursday evening, although it might already be very near its peak.

Chan-hom does look like a mean typhoon. There is a ragged eye, surrounded by deep, explosive storms on the front-end (northeast and northwest) quadrants. 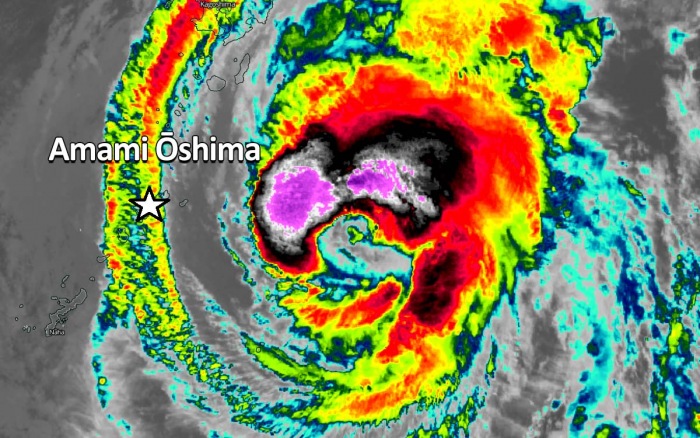 Satellite imagery reveals an enhanced poleward outflow and good equatorward outflow, while the sea temperatures are very warm, near 28-29 degrees Celsius. Chan-hom is tracking along the southwestern periphery of a subtropical ridge positioned to the northeast.

Based on the Dvorak intensity analysis, Chan-hom is packing the maximum sustained winds around 90 knots (100 mph = 165 km/h) with a central pressure below 960 mbar.

It already has a violent and large wind field. Its 50-knots wind radii are now expanding 80-100 miles around the eye, while hurricane-force 64-knot winds are expanding across the 50 miles radii in all four quadrants.

Chan-hom’s core will pass near Japan

The forecast track of Chan-hom is now taking a more northerly trajectory, meaning it is turning towards Kyushu Islands, Japan. With the north turn now, the system will also avoid the direct hit to the Ryukyu Islands, it is moving to the east of the Daitojima region of Okinawa Prefecture.

However, after roughly 30-36 hours, the typhoon will turn towards the northeast and its center will remain off Japan to its south. It will then also begin accelerating while grazing south of Japan and there are now increasing chances it will pass very near the capital Tokyo on Friday night into Saturday morning. 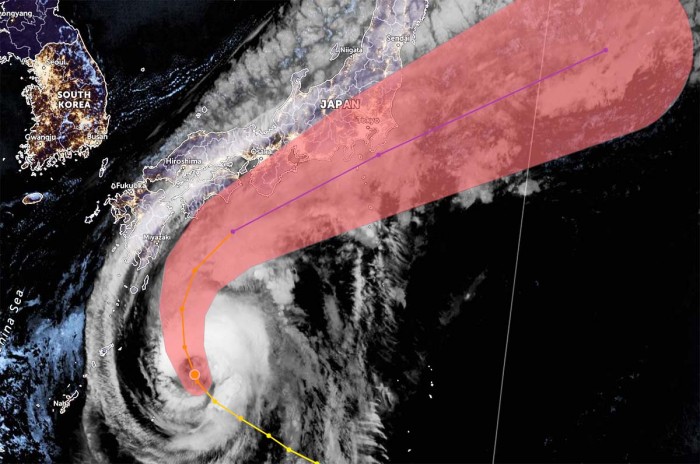 The storm surge will be severe along its path and will affect southern and southwestern Japan, as the typhoon is still gathering strength and expanding its wind field. Additionally, maximum gusts in the range of 120-160 km/h will be possible, along with torrential rainfall (150-300 mm locally) and flooding threats.

Over the weekend, Chan-hom will transition into a powerful extratropical storm while rapidly ejecting towards the North Pacific.

The storm has developed at the latitude 22 degrees north, which is a quite rare occurrence for October. Typically, only 10 percent of October tropical storms form north of the latitude 20°N over the Western Pacific. This indicates the seas are extremely warm.

Chan-hom is rapidly gathering strength towards the typhoon status, over very warm Philippine Sea waters, located still quite far south of Japan. The powerful storm is expected to approach the southwestern part of the country sometime on Thursday and Friday this week. Chan-Hom could be devastating for Kyushu Islands, Japan.

Chan-hom has begun its faster intensification today, as seen by the strengthening storms around the surface low. Explosive convective towers with very high (cold) cloud tops are visible. The attached MODIS infrared satellite scan reveals that the cloud tops temperatures are below -85 °C. 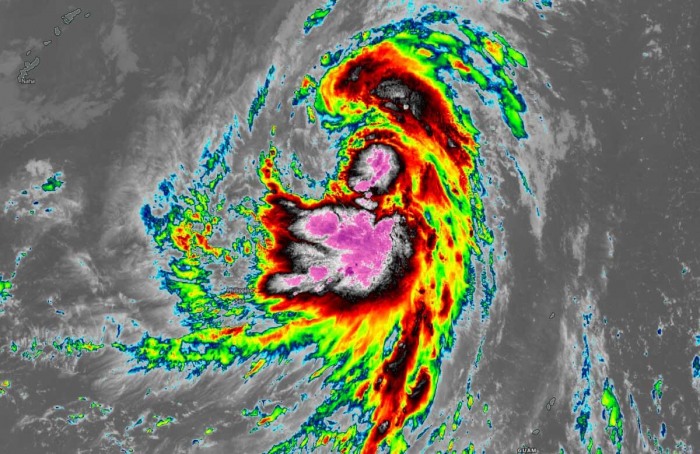 A wider satellite image reveals a frontal system is ejecting to the east of Japan, associated with the large extratropical storm centered over the Sea of Okhotsk.

While the organizing tropical depression is seen further south, over the Philippines Sea. Although there is some drier air to the northwest of the storm, Chan-hom will keep strengthening while heading towards Japan. 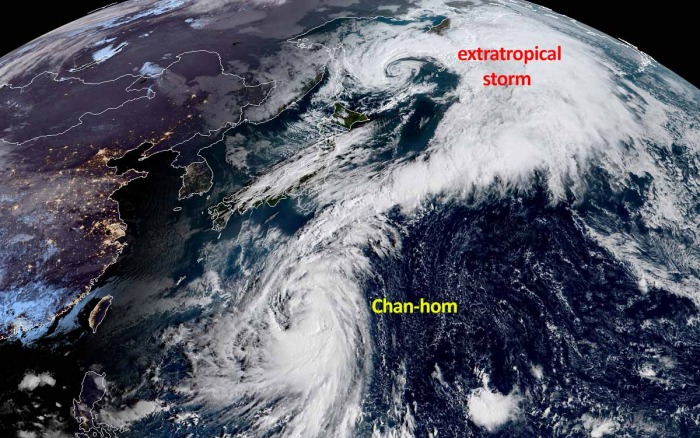 Chan-hom is likely to begin a rapid intensification process sometime over the next 24-36 hours, as it is tracking across very favorable oceanic conditions. It is expected to become a typhoon soon, likely reaching a Category 2 strength by Thursday.

Based on the latest Advanced Dvorak Technique (ADT) analysis estimates, Chan-hom is gradually strengthening and becoming a strong tropical storm. ADT estimates suggest the maximum sustained winds now are around 35 knots with the minimum central pressure near 997 mbar. Its wind field is growing.

When Chan-hom intensifies into a typhoon over the next day or so, it is expected to turn towards Japan. The general northwesterly track is forecast, bringing the typhoon into the extremely warm, near-record hot waters for most of its lifecycle.

29-31 °C is spread across the whole western Pacific and also very warm to the south of Japan. Right where Chan-hom will be moving. 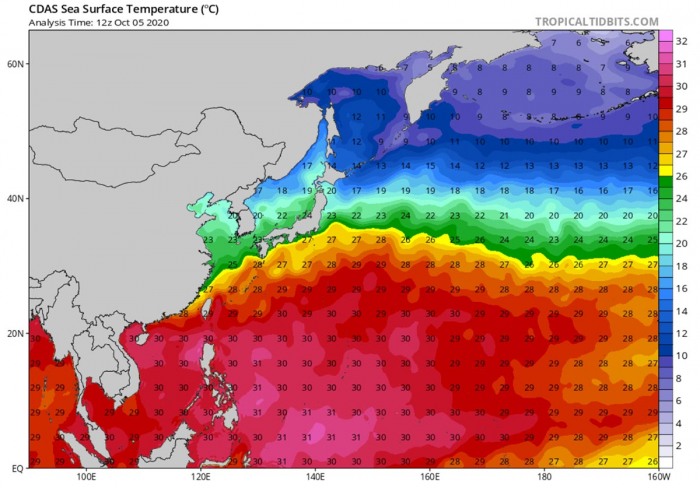 Typhoon Chan-hom should track across these extremely favorable oceanic conditions for the next 72 hours. Also, low wind shear is present along the track of the typhoon until it reaches Japan, allowing it to continue strengthening.

As typically over the past years, the Western Pacific Ocean waters are very warm and locally even hot. As seen above, around 31 °C over the Philippines Sea. This region has around 1 °C warmer seas than normal.

Even stronger sea surface temperature anomaly is further north, roughly 2-3 °C above the long-term average. Precisely across the South China Sea, around Taiwan, and over the Sea of Okhotsk. 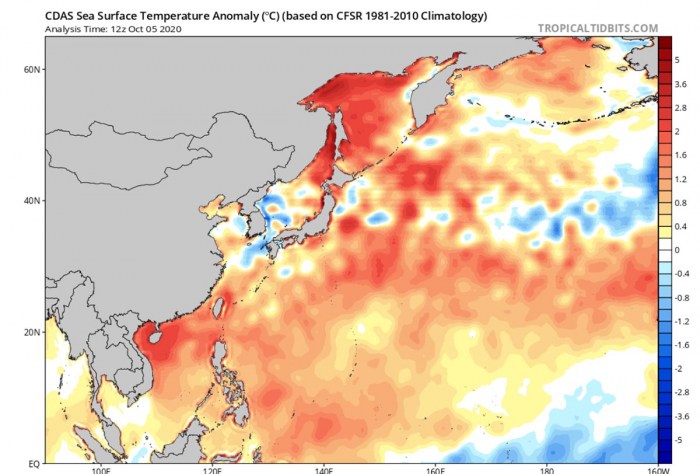 The next 48 hours (through Tuesday and Wednesday) will be crucial for its strengthening. It is often seen that this area with hot seas leads to the explosive intensification of tropical storms/typhoons.

Chan-hom is forecast to track generally northwest for another 24 hours, then taking a more west-northwesterly route about a day. After Wednesday, the typhoon turns towards Kyushu Islands, Japan. Chan-hom will be gathering strength and expanding its wind field until the peak intensity around Thursday. 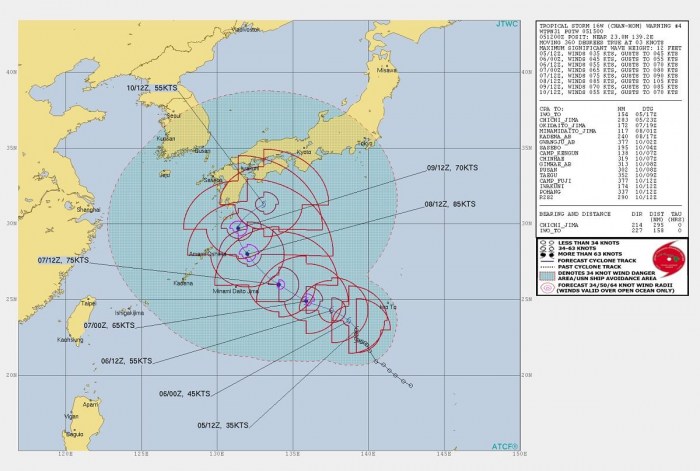 Although Chan-hom is still organizing and the typhoon status is not officially set, the majority of the ensemble GEFS model perturbations are tracking Chan-hom towards the island Kyushu, or very near to its southern coast. 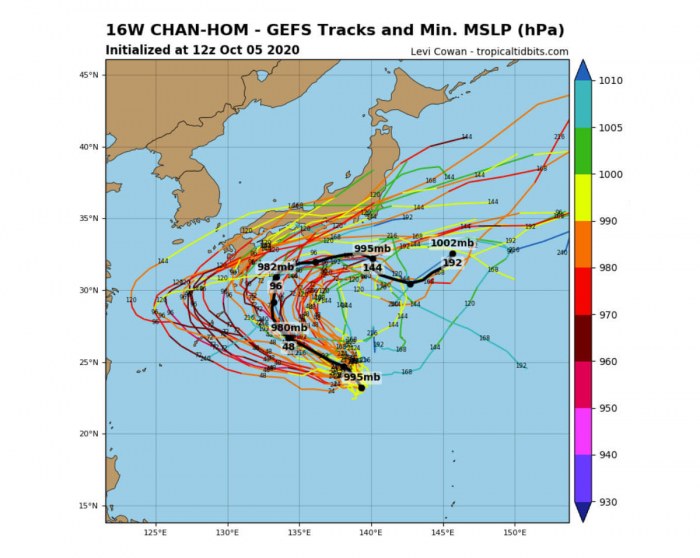 It has to be noted that there are still many uncertainties regarding the exact track of the typhoon. There are also possibilities typhoon may completely miss Japan to its south, so the impact will be the most significant offshore.

Chan-hom seems to be taking a similar track as the last typhoon Dolphin around 10 days ago.

After Chan-Hom ejects off Japan, it transitions into an extratropical storm and accelerates towards the North Pacific. This should happen by early next week.

A dangerous situation is developing, as part of Japan could be severely hit by a violent wind, storm surge, and a tremendous amount of rain with flooding.

Attached graphics by Windy.com indicate that the ECMWF model is forecasting Chan-hom could become a violent typhoon while moving across the northern Ryukyu islands through Thursday and Friday. Extreme winds are simulated by this model. 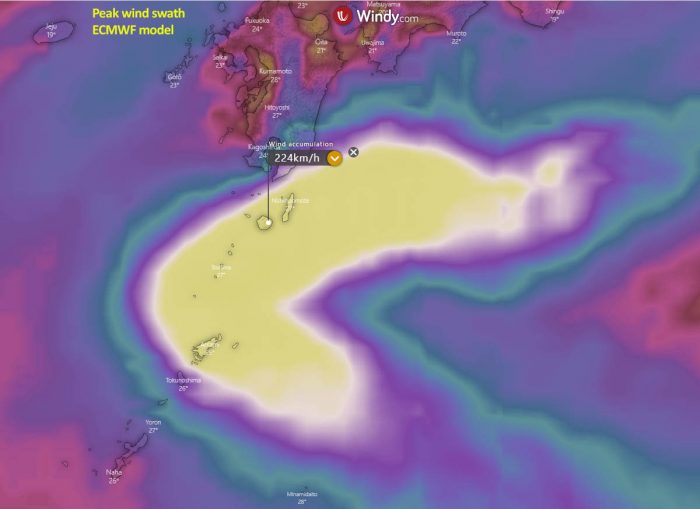 The other global model GFS is, however, hinting a less intense typhoon but still a very strong wind field. Here is a sample forecast from today’s 12 UTC model run, during the Chan-hom approach on Saturday. 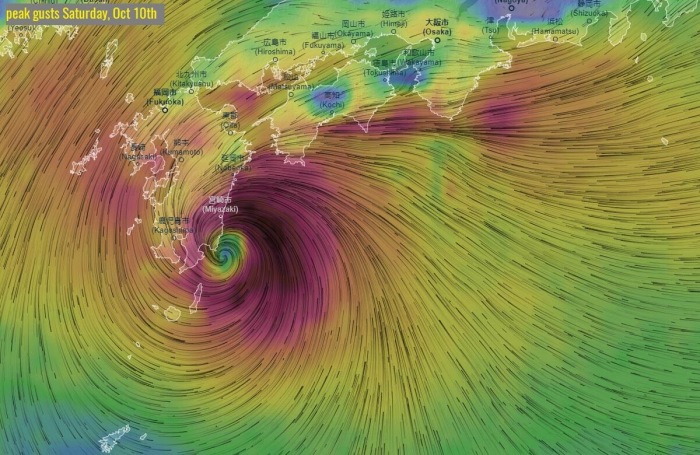 A significant amount of rainfall is expected along the track of this typhoon, especially across southern Japan and the Ryukyu Islands. The ECMWF model is hinting a tremendous amount of rainfall possible – close to 900 mm across the northern Ryukyu islands over the next 10 days! 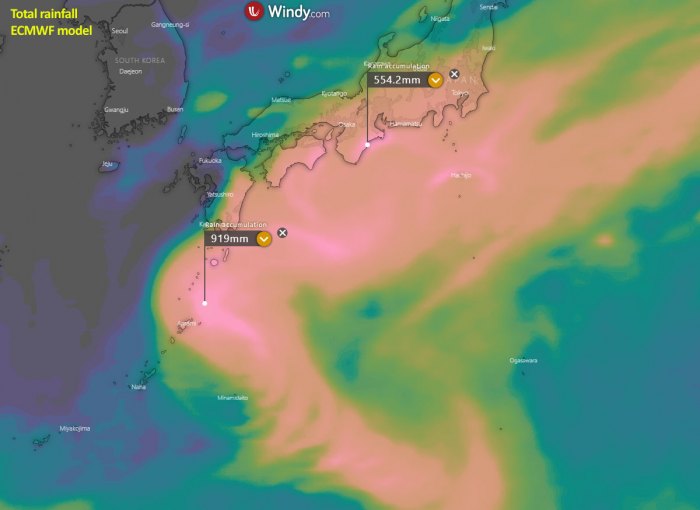 Soon after the pass over the Ryukyu islands, typhoon Chan-hom will likely begin weakening while heading towards Japan. Still, torrential rain will remain and the amount of rain could locally reach 400-500 mm. 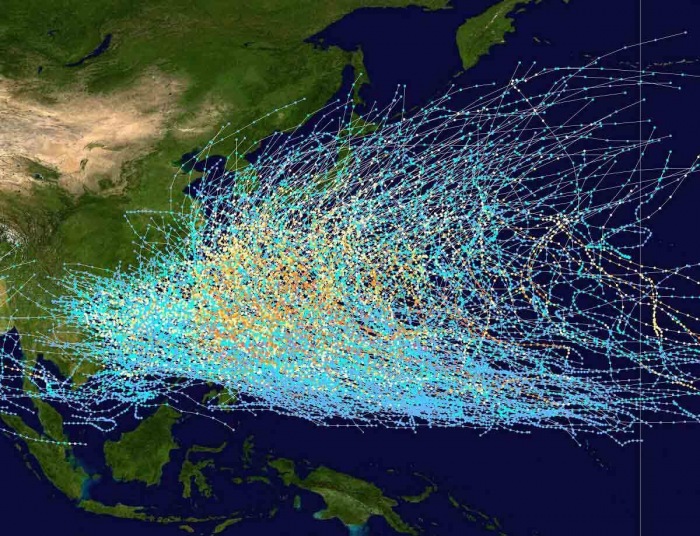 And the final environmental support with upper-level divergence, supporting the upward motion for deep convective storms to develop.
At the surface, a pre-existing low-level wave or disturbance develops and moving through an environment with low vertical wind shear. A tropical cyclone gets designated to a typhoon when maximum sustained winds are above 64 knots (73 mph or 118 km/h).

Some uncertainties remain how intense typhoon Chan-hom could form over the next two days, but it is very likely to become a strong one. Taking the extremely warm seas and favorable oceanic conditions into the consideration, the system has the proper ingredients to develop a strong wind field and head towards Japan.

The further development of Chan-hom is being monitored, so stay tuned for further updates over the coming days when stronger typhoon strength emerges!