Caribbean region is in focus for a potential Tropical Storm development this weekend, Gamma could form soon. An organizing surface low is located near the Yukatan peninsula and could bring an extreme rainfall threat over Mexico and the Gulf. Another tropical wave is crossing the Lesser Antilles.

The main focus goes to the increasing activity with the tropical depression near the Yukatan peninsula, a Tropical Storm formation is expected on Saturday.

The forthcoming Tropical Storm with result in a life-threatening flash flooding over portions of the Yucatan Peninsula, far western Cuba, and well away from the center in the Mexican states of Campeche, Tabasco, and northern Chiapas. A Tropical Storm Warning is in effect.

Both the environmental and oceanic conditions are again becoming more favorable for tropical formation. The Madden-Julian Oscillation (MJO) wave is now emerging in the region from the west, while a very warm Caribbean Sea remains. Conditions are now prime for additional tropical activity.

Below is the Geocolor NASA satellite image on Friday morning, notice also a Category 4 hurricane Marie over the Eastern Pacific. 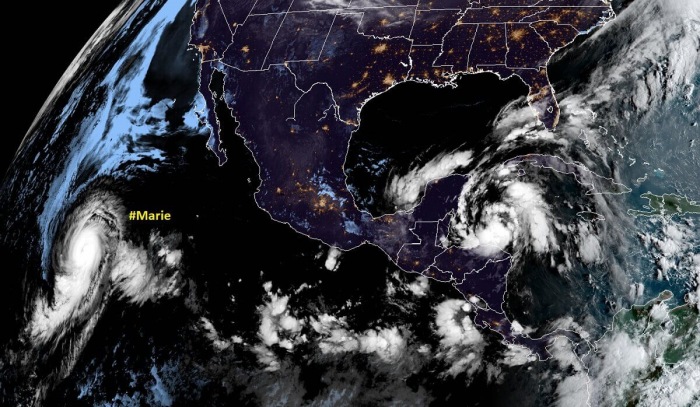 The tropical disturbance near the Yucatan peninsula, designated as #25L by NHC, has great potential to become a tropical storm over the next 24 hours. The satellite imagery indicates increasing activity. NOAA Hurricane Hunters are scheduled to investigate the system today.

When Tropical Storm forms, its main impact will be torrential and excessive rains over portions of southeastern Mexico, Central America, and western Cuba. Weather model guidance suggests that a Tropical Storm could then continue northwestward across the Gulf towards the US landfall sometime next week.

Developing conditions for the Caribbean

The conditions for the development of #25L are very favorable. The sea surface temperatures of the northwestern Caribbean Sea are near 30-31 degrees Celsius (87 degrees F). Low wind shear is present with a very moist atmosphere with a mid-level relative humidity of 80%. 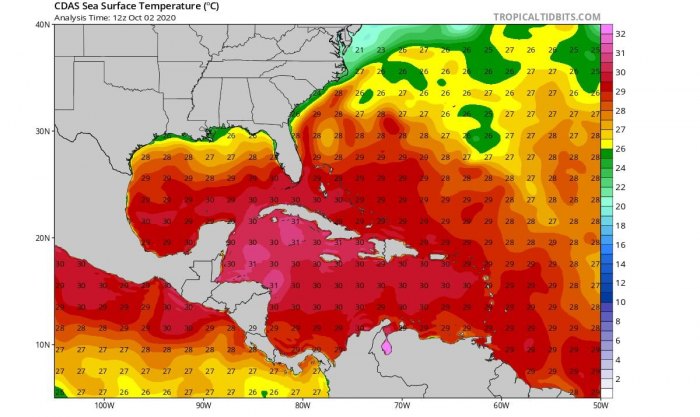 Invest #25L is packing the maximum sustained winds of 30 knots with the minimum central pressure around 1005 mbar.

Environmental conditions are expected to be conducive for a tropical depression or a tropical storm to form later today or Saturday if the system remains over the waters of the northwestern Caribbean Sea or the southern Gulf of Mexico.

Regardless of development, this system is expected to produce torrential and excessive rainfall, with potential for flash flooding over portions of southeastern Mexico, Central America, and western Cuba during the next several days. 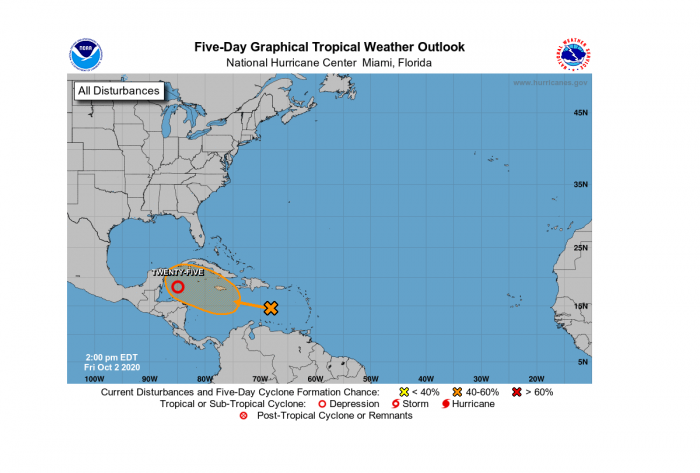 The next named storm from the list will be Tropical Storm Gamma. The current record for the earliest 24th Atlantic named storm is October 27th, 2005.

Another disturbance in the eastern Caribbean

A tropical wave over the eastern Caribbean Sea is producing a large area of disorganized showers and thunderstorms, accompanied by locally heavy rainfall and gusty winds.

This wave is forecast to move westward at 15 to 20 mph during the next several days, and environmental conditions could become a little more conducive for development when the system is over the central or western Caribbean Sea early next week.

The National Hurricane Center (NHC) gives this wave a 30 percent (%) chance to become a tropical depression/storm through the next 5 days. The system surely needs to be monitored for further development and potential threats.

The next, 4th Greek alphabet letter for the future storm names is Delta. 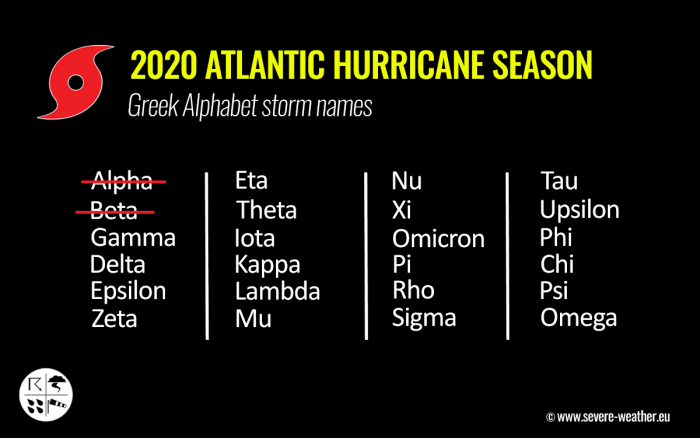 There is quite a large cyclonic circulation existing over Central America and the Caribbean. The most active storms are well-defined near the forming surface low over the northwestern portions of the Caribbean Sea, east of the Yukatan peninsula. 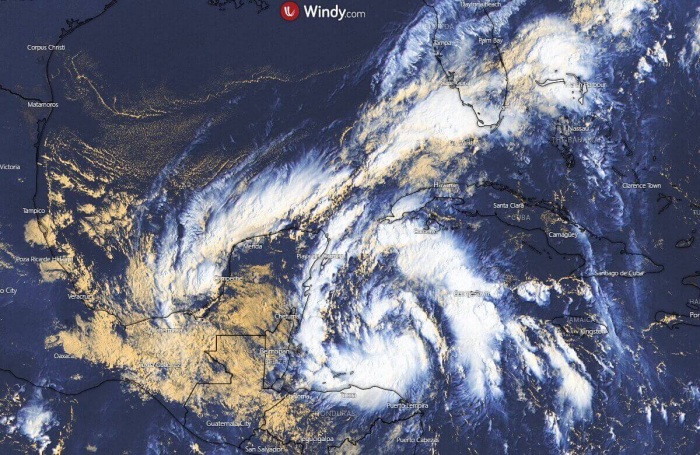 While the water vapor satellite scan does reveal a broader picture. There is quite a lot of mid-level moisture present across the whole circulation, the outflow ventilation is quite impressive.

The depression seems to be ready for further strengthening this weekend. 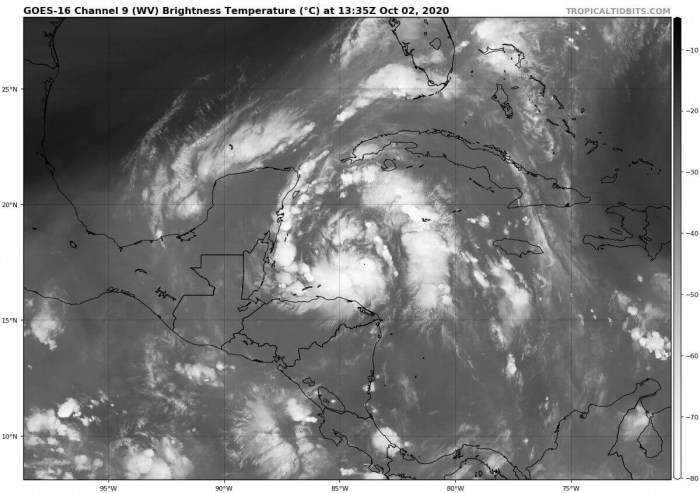 The future track of the forthcoming storm Gamma suggests that the upper-level ridge to the north of #25L should keep it moving westward-northwestward over the weekend.

The disturbance will track to the coast of the Yucatan Peninsula (Mexico) on Saturday, although there is also a possibility that the center missed Yucatan and remains over water. The pattern could steer it north through the Yucatan Channel between Cuba and Mexico.

However, a lot of uncertainties remain how the track of this forthcoming storm Gamma will be early next week. As #25L is a part of a broad cyclonic circulation over Central America, also the other tropical wave over the eastern Caribbean (now moving into the Lesser Antilles) may play an important role on the system’s track. 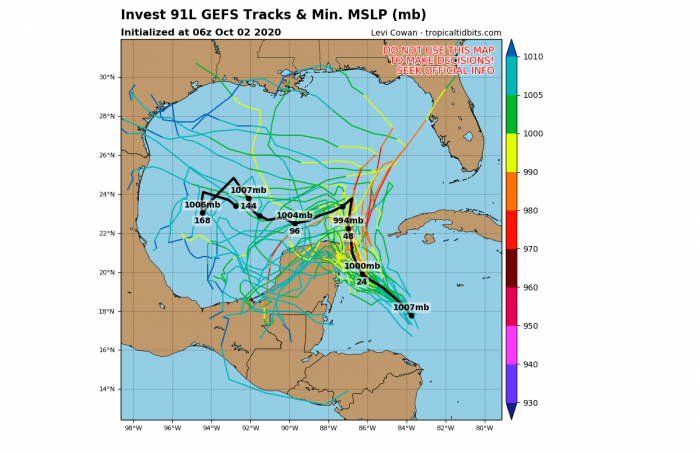 Video animation of a developing system today and over the weekend. A broad circulation is well visible. Graphics by Tropical Tidbits.

Besides the possible interaction with the Yukatan peninsula, another feature that could interfere with the future development of #25L. There is a broad channel of dry air over the Gulf of Mexico, left in the wake of the frontal system several days ago. Mid-range models do indicate these potential limiting factors for the Tropical Storm Gamma.

Surely conditions are further evolution needs to be monitored closely. As if the system does battle those strongly, there will be an increased potential for the Gulf Coast tropical threat next week.

The main threat with Tropical Storm Gamma will be torrential and excessive rains over portions of southeastern Mexico, Central America, and western Cuba. A slow-moving nature of the system will lead to extreme amounts of rain in some areas, probably several hundred liters per sq meter (15-20 inches) will be possible. 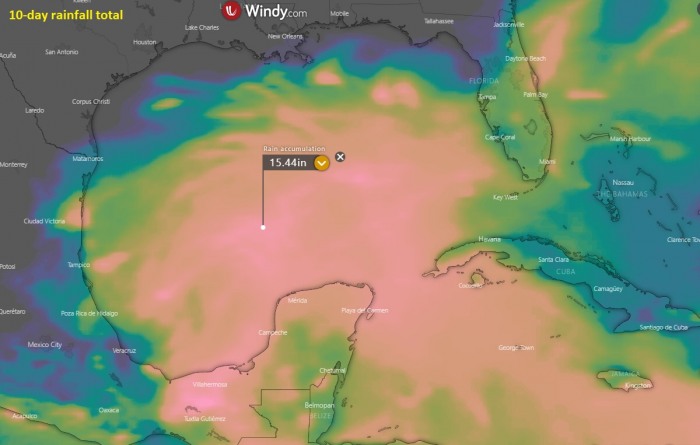 The above graphics are provided by Windy.

What’s next for the Atlantic basin?

Based on the Department of Atmospheric Science forecasters from the Colorado State University (CSU), “the next two weeks will be characterized by above-normal tropical cyclone activity“.

“The Madden-Julian Oscillation (MJO) is currently located in phase 5 over the Maritime Continent and is forecast to effectively stall over the next two weeks, likely due to the background base state driven by La Niña conditions“, forecasters noted. 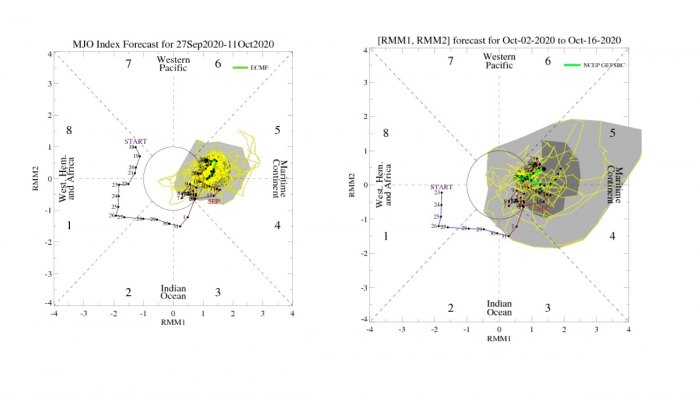 The above graphics are provided by NOAA.

Strong activity in the Eastern Pacific 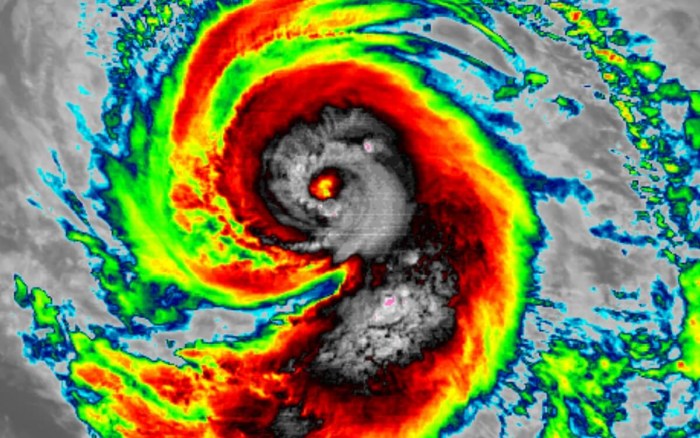 Additional tropical cyclone formation seems possible over the Eastern Pacific region next week. There is a tropical wave ejecting off the coast of Central America and southwestern Mexico which could become a Tropical Storm over the next couple of days. 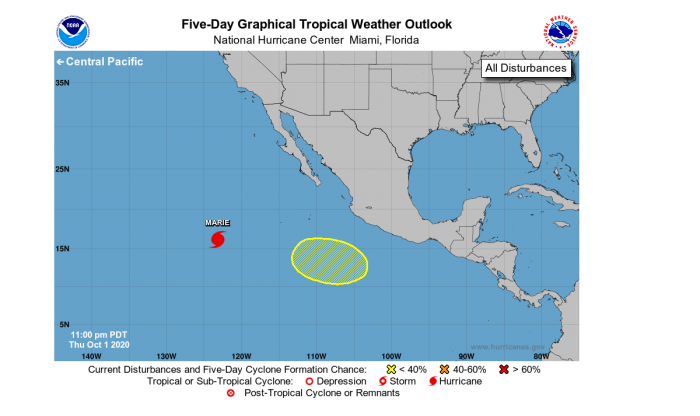 It is now imminent, that a tropical activity over the Atlantic and the Caribbean region is beginning to increase this weekend. There are currently two tropical disturbances ongoing, where the western system is expected to become a Tropical Storm Gamma on Saturday.

Another tropical wave is located over the eastern Caribbean with some potential of developing into a depression in the coming days.

The environmental and oceanic conditions are increasingly favorable for additional activity over the western Atlantic, the Caribbean, and the Gulf of Mexico through the first half of October. Supported by the MJO wave emerging from the west.

Very hot seas with nearly 31 °C over the western Caribbean are strongly supportive of an explosive fuel for deep convective storms.