Marie is the 18th tropical storm of the 2020 Eastern Pacific hurricane season.

As of 06 UTC analysis on Thursday, Oct 1st, the system was packing maximum sustained winds of 80 knots (90 mph). The minimum central pressure was around 983 mbar.

The system continues strengthening, soon expected to begin a more rapid intensification phase and become a major hurricane. An explosive burst of deep convective bands is visible around the forming eyewall.

The satellite data and microwave data reveal that Marie has become much better organized over the past several hours, with a nearly completely closed eye noted. The cloud tops are very cold, below -85 °C at times. 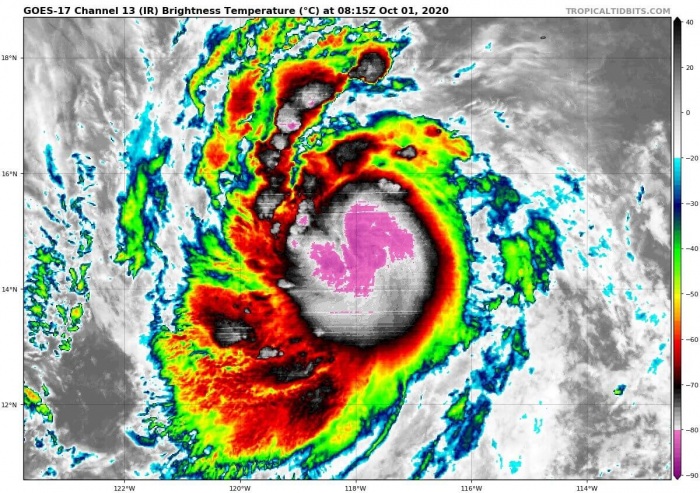 It remains in an environment of very low vertical wind shear while over warm waters of the Eastern Pacific. Marie should stay over these favorable conditions until Saturday. The overall structure of the hurricane is gradually expanding, with very healthy upper-level outflow ventilation. 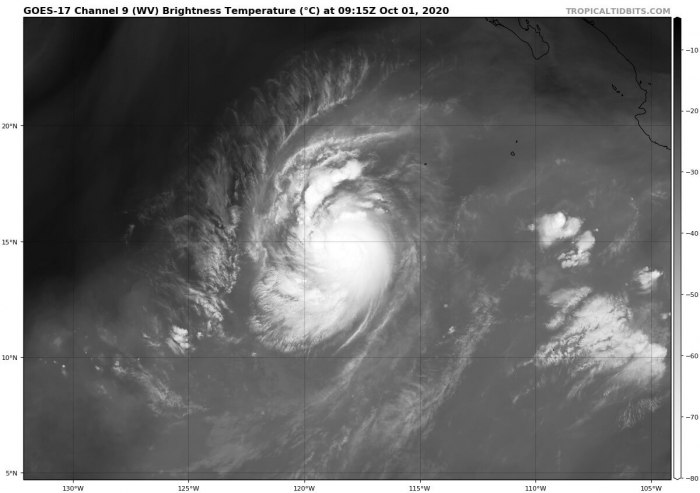 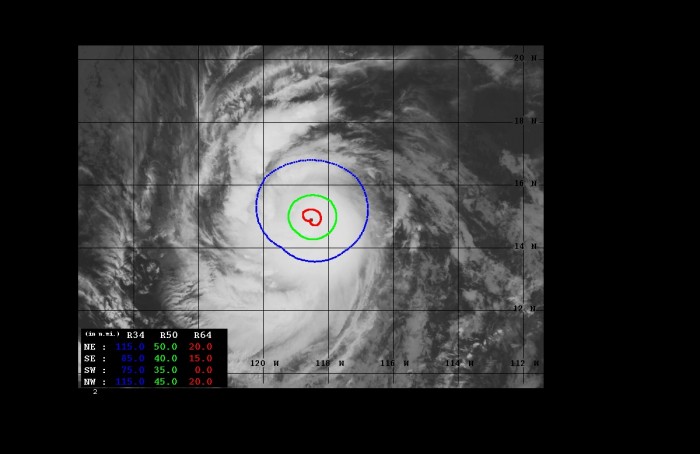 A gradual increase in intensity is visible, with a higher rate of strengthening since yesterday (Wednesday, Sept 30th) morning. Further (more rapid) strengthening is expected. Marie is steadily strengthening today and should reach a Category 3 strength tonight or early Friday. 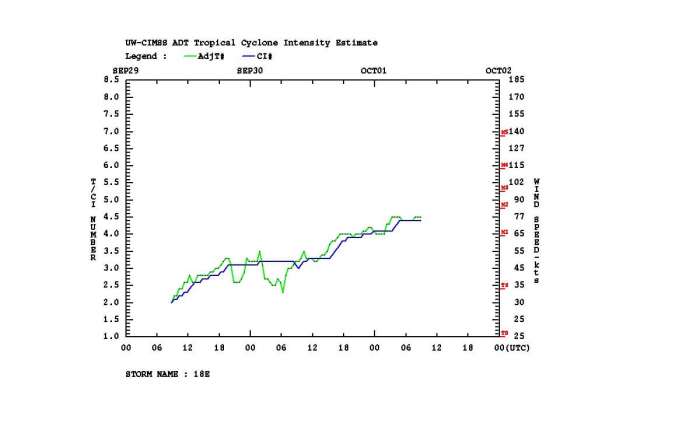 The Eastern Pacific Ocean sea surface temperatures indicate that conditions are highly supportive with a lot of tropical fuel for maintaining hurricane Marie at a violent strength until the weekend. Around 28-29 °C are spread ahead of Marie’s track. 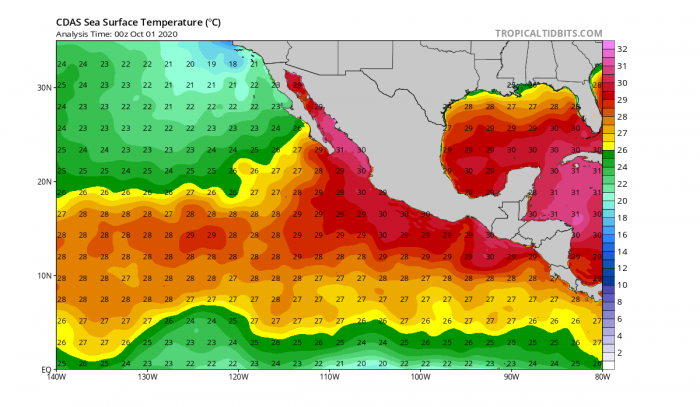 These sea temperatures are roughly 1-1.5 °C above the long-term average through early October over the Eastern Pacific. Even warmer seas as observed along the West Coast and Baja California peninsula, close to 2 °C above normal there. 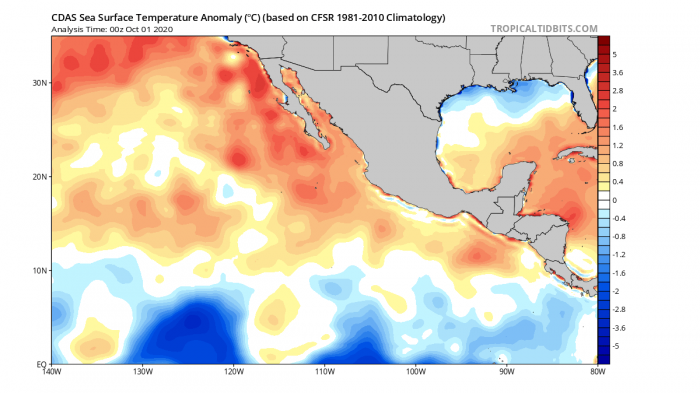 Marie is moving in a quite favorable oceanic environment for its further strengthening. The Ocean Heat Content (OHC) map is indicating that the next 48 hours will be the most favorable, so the rapid intensification should continue. 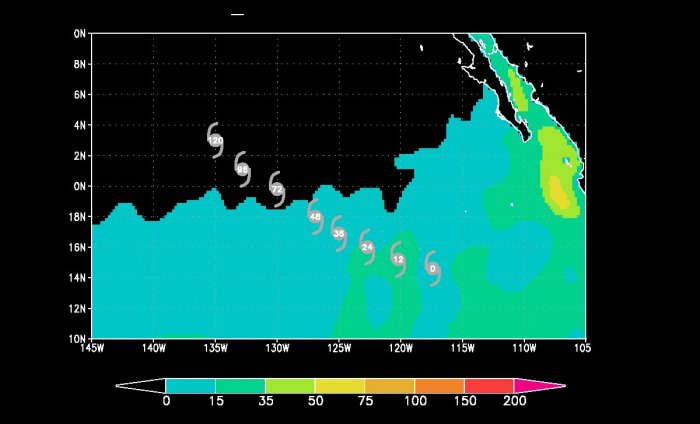 Marie is forecast to continue moving westward around a subtropical ridge to its north and northeast for the next 12 to 24 hours. Thus, Marie will be tracking mostly northwest over the next few days.

The NHC is forecasting the system could even become a Category 4 major hurricane on Friday, based on the ensemble model intensity forecasts. 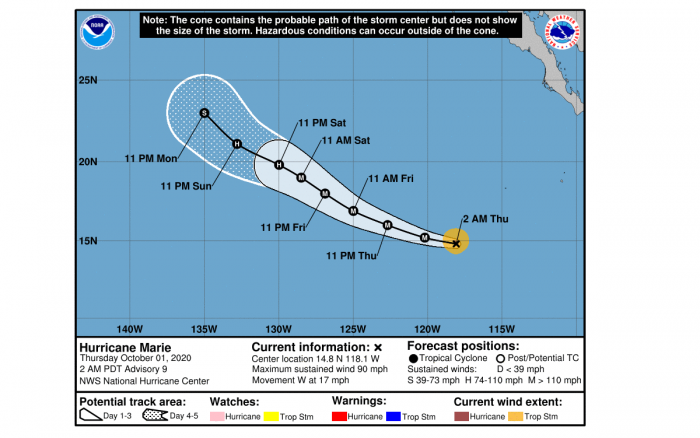 Video animation of hurricane Marie moving across the Eastern Pacific over the next few days:

After Saturday, the hurricane will move over progressively cooler waters and encountering increasing vertical wind shear and a drier, more stable atmospheric environment. These factors should cause Marie to begin weakening.

Mainly most of the GEFS model forecasts are in quite good agreement for the next few days, Marie will be moving generally northwestward and maintain its violent strength.

After Sunday, the turning towards the north and then northeast next week is expected, while the system will continue weakening and eventually dissipate. 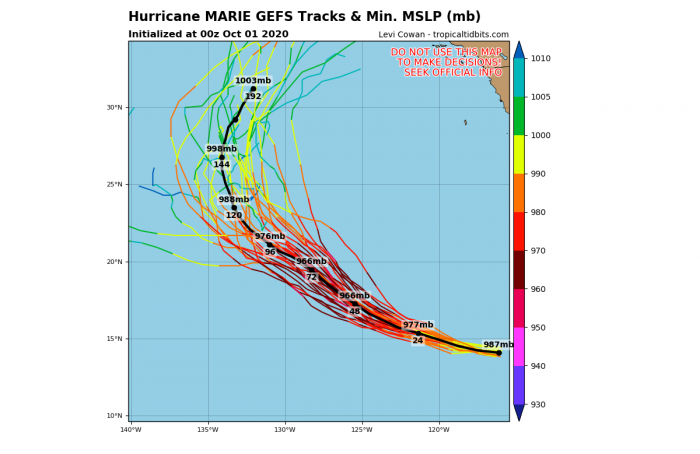 Here is the various model forecast for the intensity of Marie during its lifecycle. There is a quite high potential that the hurricane will continue rapidly strengthening over the next 36 hours and become a major Category 3 tonight or even 4 by Friday. The maximum sustained winds could reach around 120 knots, a solid Category 4 strength. 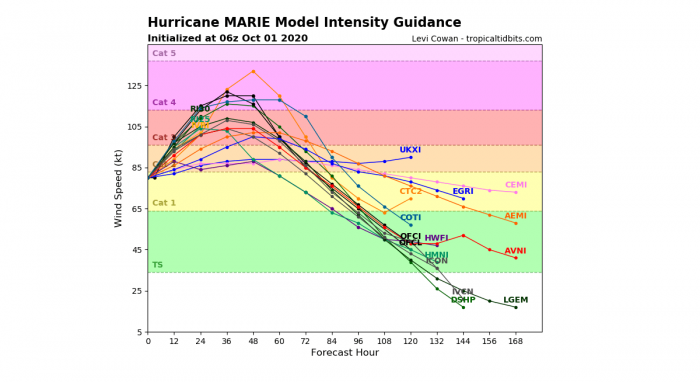 Hurricane Marie will remain over open waters of the Eastern Pacific and should not affect any land areas. It will transition into an extratropical storm early next week. Its remnants could, however, reach the state of California later next week but as a normal frontal system. 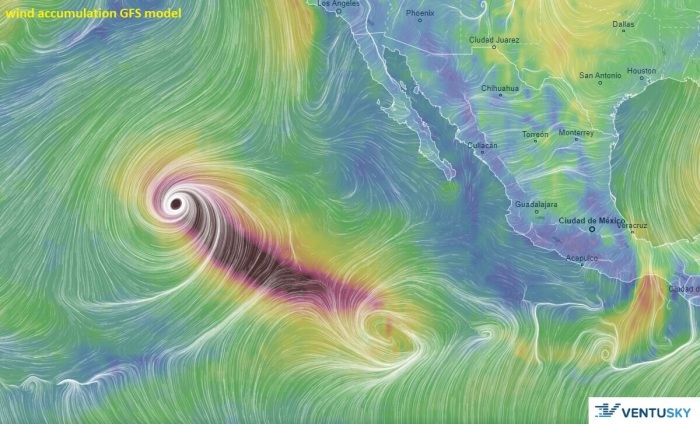 Attached are the simulated Infrared satellite charts for Thursday night and Friday night. These indicate hurricane Marie will become a violent and strongly organized hurricane. In line with both strongest Eastern Pacific storms this year – major hurricanes Douglas and Genevieve. 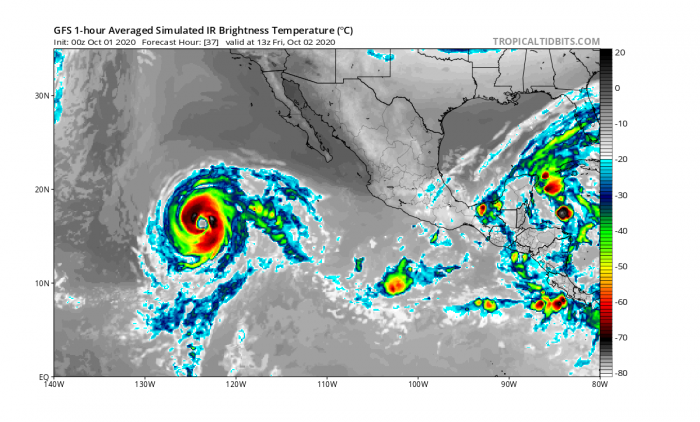 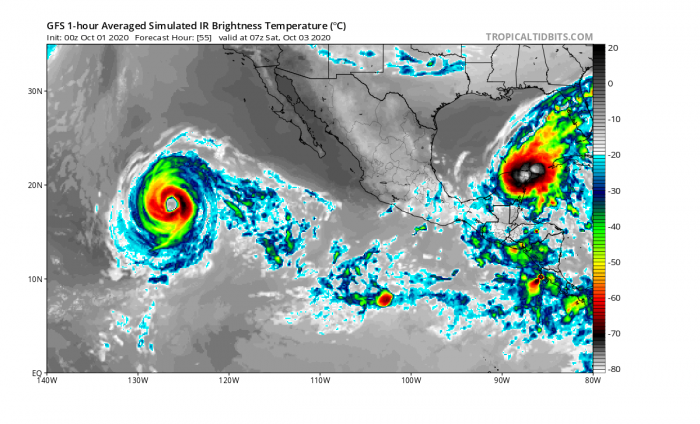 Notice there are signs of a tropical depression also forming in the northwestern Caribbean, near the Yukatan peninsula. The system then heads into the Gulf of Mexico on Sunday. 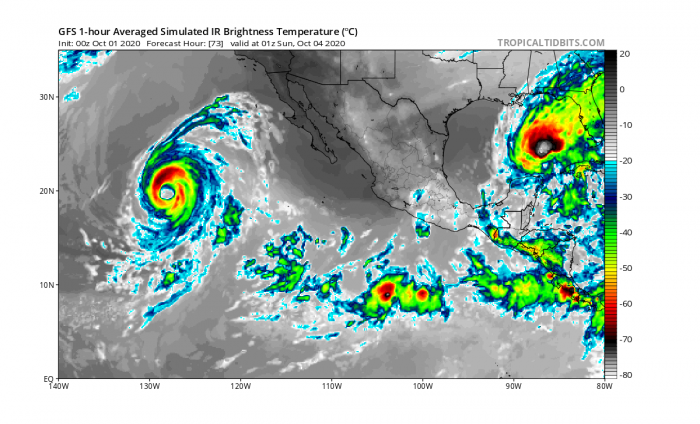 Hurricane Marie will soon become a Category 3 hurricane – the third major hurricane of the Eastern Pacific hurricane season. So far, there have been 18 tropical depressions forming in the region, quite a low number for this part of the tropics so far.

There were only 13 named storms, where 3 of those were hurricanes and 2 major hurricanes forming (Douglas, Genevieve) this season. Normally, there are 15.4 named storm and7.6 hurricanes.

We are monitoring the further development of hurricane Marie – stay tuned for additional updates as major hurricane strength emerges on Friday.

The tropical Atlantic and Caribbean are soon becoming active again. The Madden-Julian Oscillation (MJO) is expected to contribute to a much higher activity especially across the Caribbean with a potentially developing tropical system towards the Gulf of Mexico next week.

For tropical cyclone warning purposes, the northern Pacific is divided into three regions:

Hurricane season of the Eastern Pacific runs between May 15th and November 30th each year. This area is, on average, the second-most active tropical basin in the world. 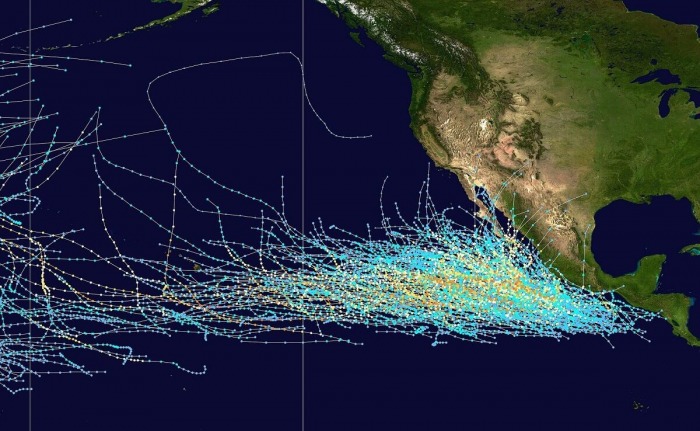 Most of the east Pacific storms or hurricanes originate from a tropical wave that drifting westward across the intertropical convergence zone (ITCZ), and across northern parts of South America. Once the wave reaches the Pacific, a surface low begins to develop.

If the wind shear is low, a tropical cyclone can undergo rapid intensification as a result of very warm oceans, becoming a major hurricane.

Tropical cyclones weaken once they reach unfavorable areas for a tropical cyclone formation further west in the Central Pacific. However, hurricanes or their remnants sometimes reach the Hawaii archipelago.

Sometimes storms can move north-east either across Central America or mainland Mexico and possibly enter the Caribbean Sea becoming a North Atlantic basin tropical cyclone, but these are quite rare.

The Western North Pacific has tropical systems which are called typhoons. This separation between the two basins has a practical convenience, however, as tropical cyclones rarely form in the central North Pacific due to high vertical wind shear, and few cross the dateline.

Tropical Storm Gamma is now likely to form near Yucatan, extreme rains are forecast for the Gulf and Mexico