Pressure and wind changes in the North Pacific ocean have enabled the sea surface temperatures to rise above normal levels. A strong oceanic heatwave has formed in this process, impacting the regional weather and marine life.

An oceanic (marine) heatwave is very similar to an atmospheric heatwave, which we all know as hot or very hot weather. The ocean temperatures can also rise above the normal levels, due to changes in atmospheric pressure and wind patterns.

The heatwaves in the ocean are better known as marine heatwaves or MHWs. These marine heatwaves are defined when temperatures are much warmer than normal for an extended period of time. They can have significant impacts on marine ecosystems and the food industry.

The map below shows the typical areas around the world, where these ocean heatwaves occur. We will be focusing on the North Pacific today, as it is currently developing a new strong oceanic heatwave. 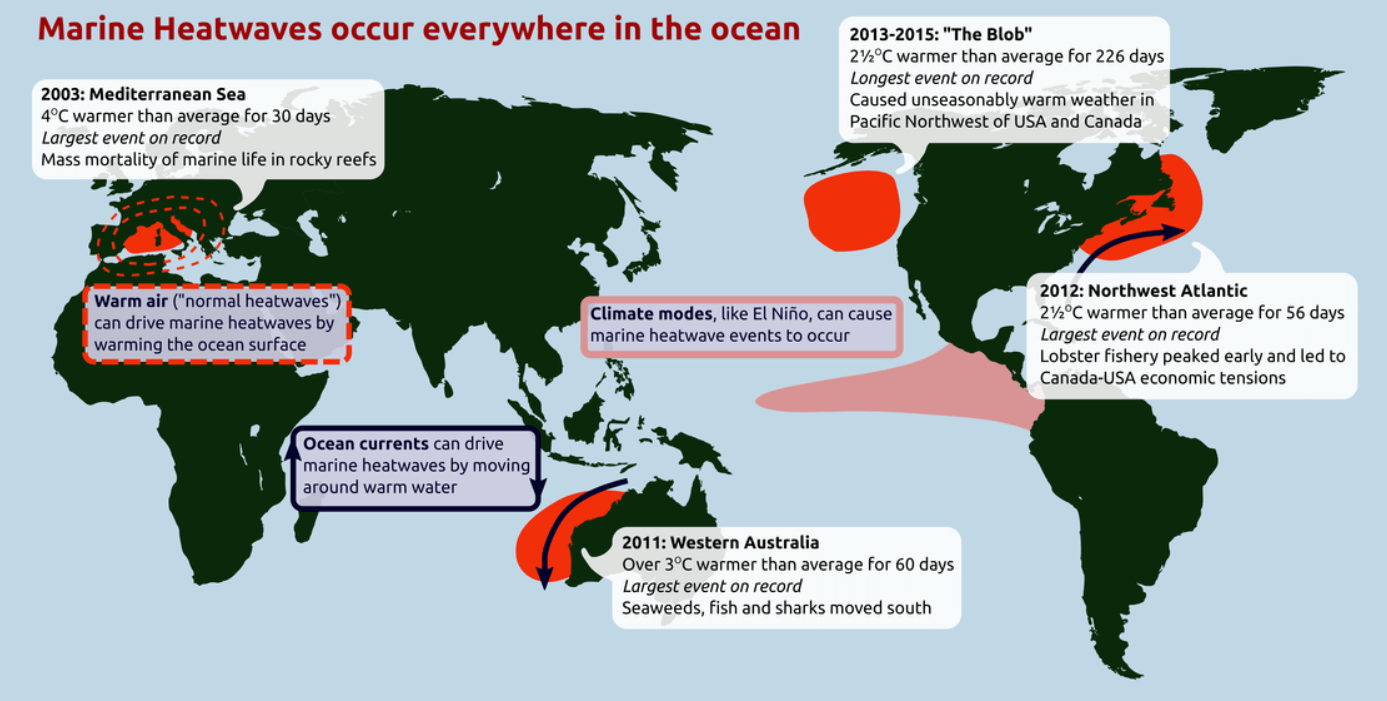 The image below shows the typical progress of a marine heatwave event. Usually, an early phase starts with warmer than normal “heat spike” days, which are not defined as an ocean heatwave right away. It takes consecutive days with abnormal temperatures to define an oceanic heatwave event.

Below is a current global ocean temperature anomaly map, which shows where the ocean temperatures are warmer/colder than normal. We can see a strong warm anomaly in the North Pacific Ocean, extending from the east Asian coast, all the way towards the west coast of North America. This will be our focus area. 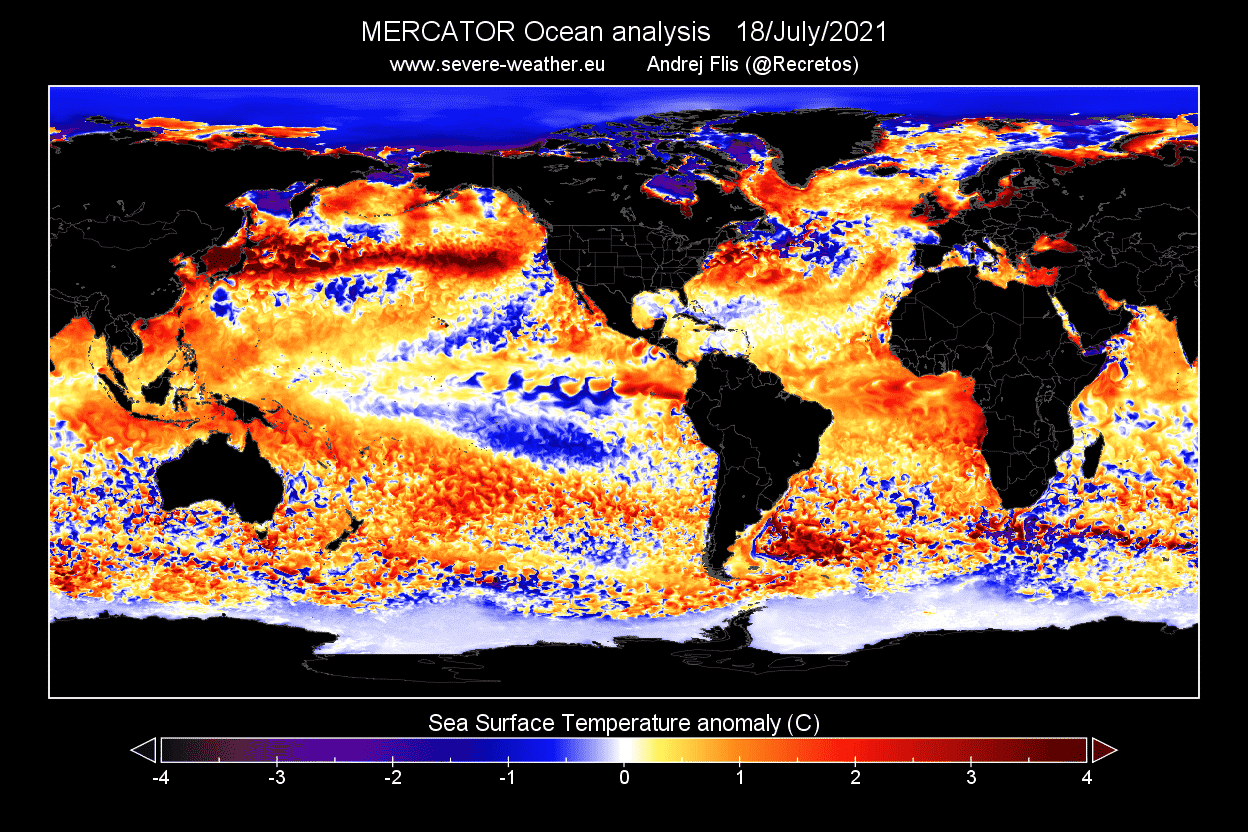 The video below shows the temperature anomaly development in the North Pacific, where you can nicely see the onset of the strong oceanic heatwave. The anomalies were going back and forth in early May, but always staying warmer than normal. Two separate phases of strong warm anomalies can be seen in late May and late June, lasting into July.

HEATWAVE IN THE OCEAN

The development of this oceanic event began in May. Early in the month, a high-pressure area was strengthening just off the west coast of the United States. It was extending further back towards the central North Pacific. A low-pressure system was present over the Aleutian Islands.

The main effect of the high-pressure system is that it lowers the rate of heat loss from the sea to the atmosphere. That is due to the warmer air above the water surface and also because of the very calm weather. Weak winds mean weaker surface sea currents and less mixing of the ocean waters.

The ocean gets colder the deeper you go. So low-pressure systems and strong winds create waves and rough seas, mixing the top warm layers with colder deeper ones, cooling the surface of the ocean. With calm weather, there is no mixing and cooling, and sea surface temperatures can increase.

Looking at the wind patterns below, you can nicely see an anomalous southerly wind flow. This has helped to bring warmer waters further up towards the north.

Combined with the effects of the high-pressure system, this has helped to create a large warm ocean anomaly in the northeast Pacific Ocean. You can see colder than normal waters along the west coast of the United States, reaching further south. This was partially a response to a change in wind patterns, and the northerly/easterly wind flow in that region. Northerly and easterly winds can cause ocean mixing and cooling. 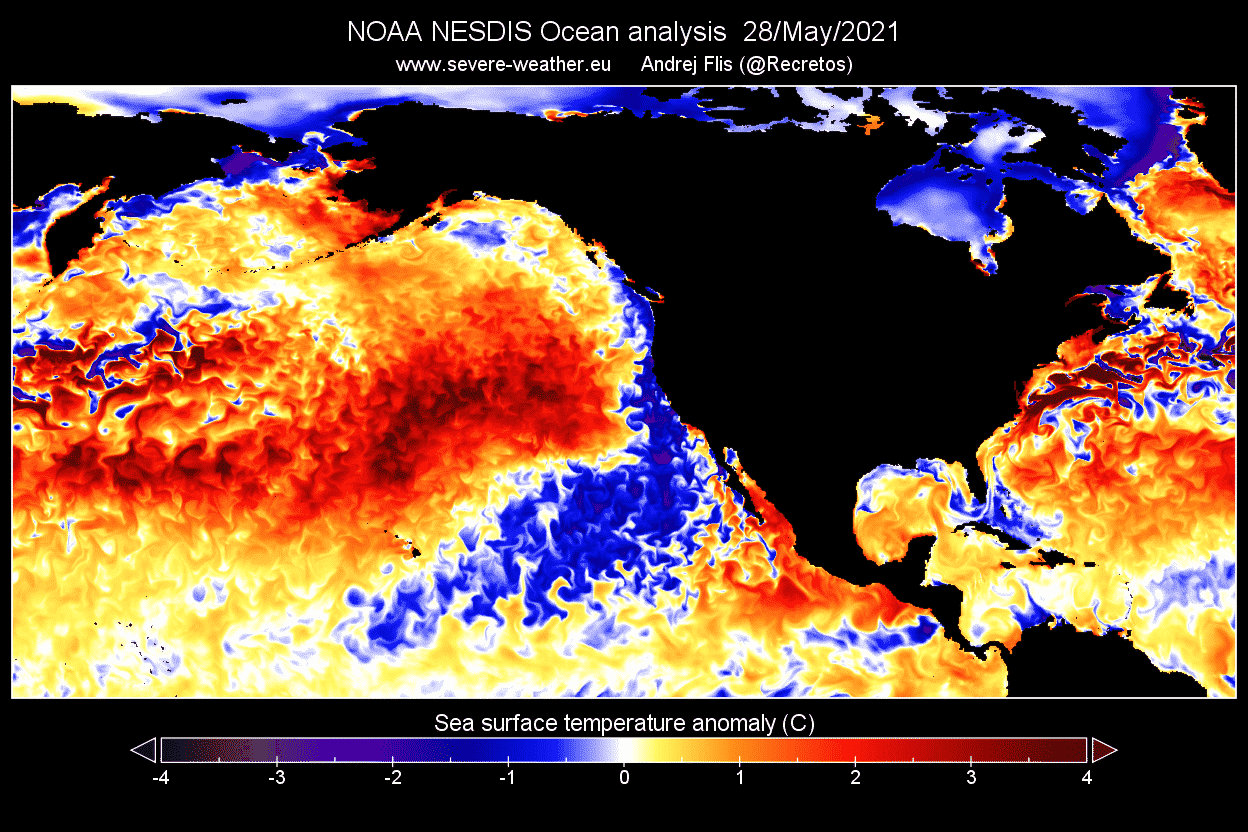 The high-pressure system intensified and moved further west in early June. This temporarily stabilized the developing anomalies, via the calm weather and the lower heat exchange from the ocean to the air.

The strongest anomalies moved further east, removing some of the colder ocean temperatures along the northwestern coast of the United States. 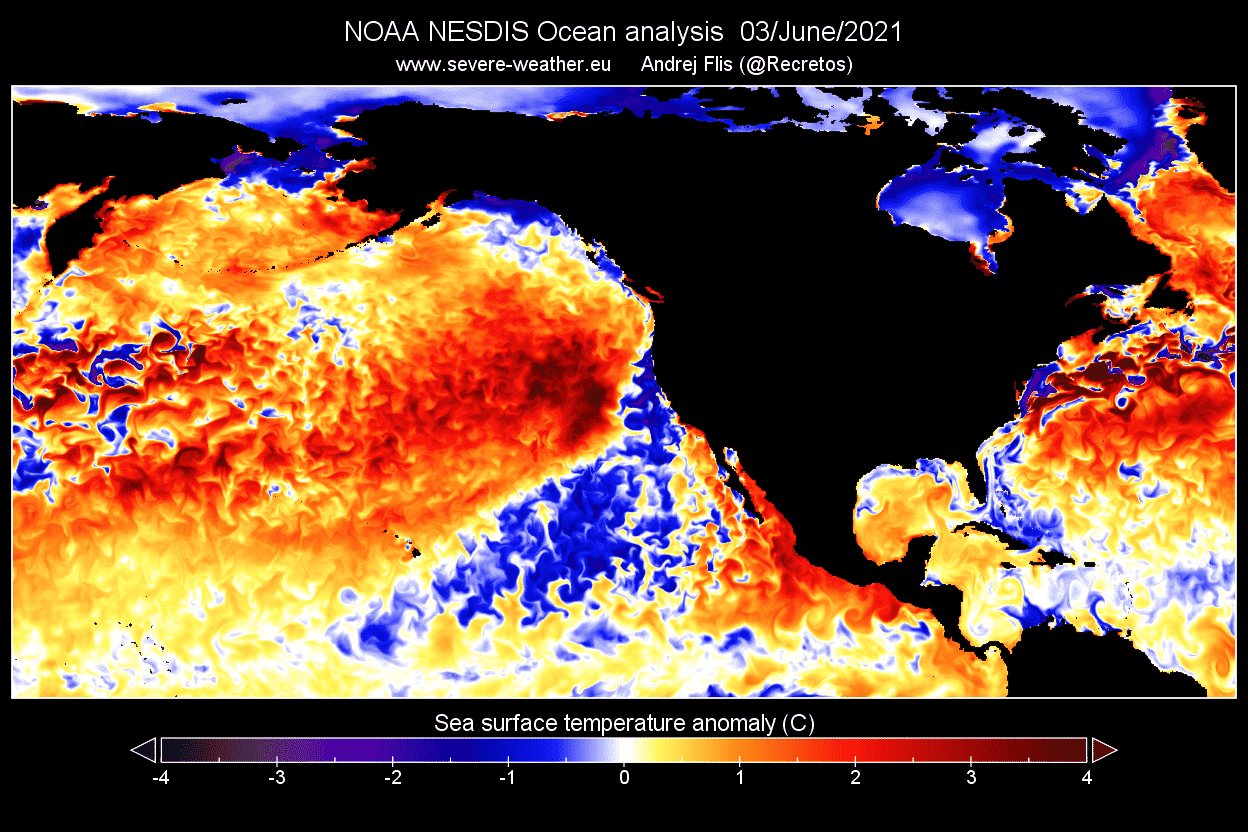 There was a pattern change towards late June in the North Pacific. A strong low-pressure system came down from the Aleutians, temporarily ending the dominance of the high-pressure system.

The ocean temperature anomaly for late June shows the exact warm anomaly “lines” along the westerly and southerly wind regions. You can see the cold ocean anomalies starting to weaken along the west coast of the United States as the weather and wind patterns changed. 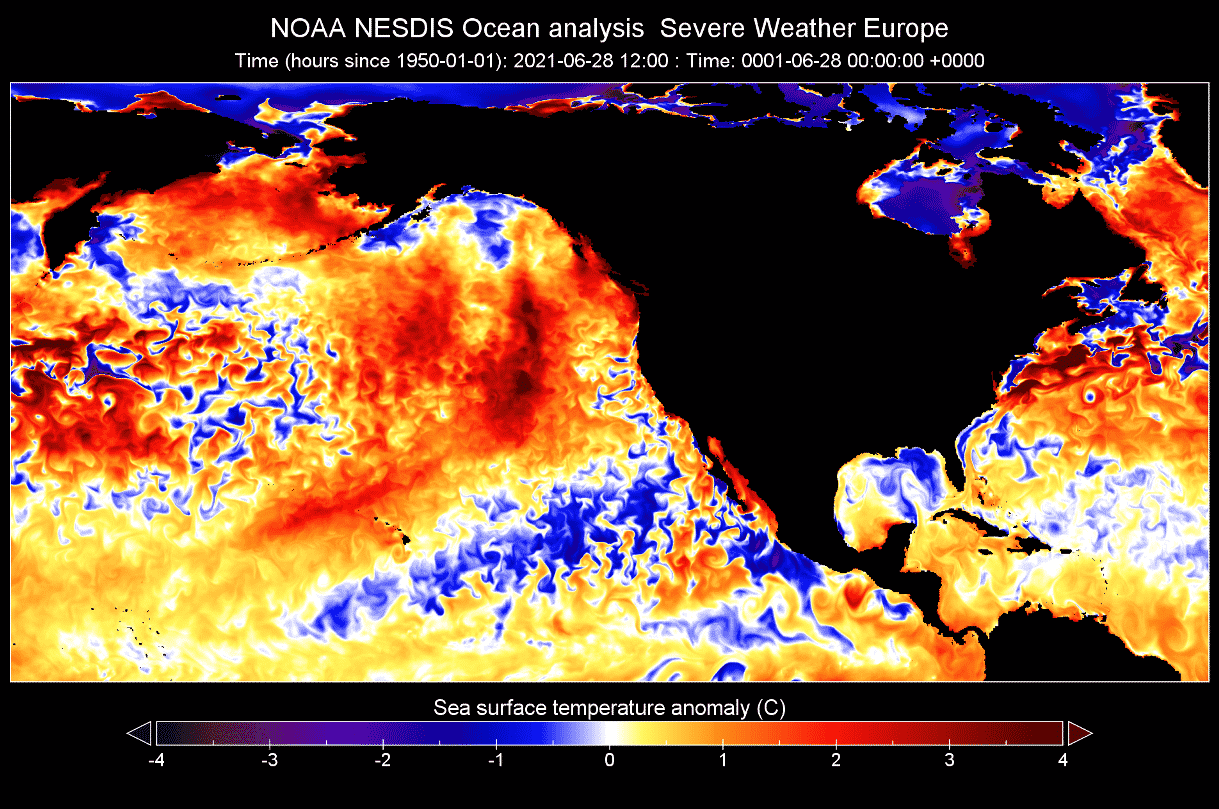 You can see on the temperature map below that warmer temperatures are extending towards the northwest coast of the United States and towards the west Canadian coast. The image below is for July 12th.

The latest analysis below shows that the temperatures have risen around the northwest coast of the United States, as the warmer waters are still being pushed in from the west.

Looking at the actual anomalies, we can see the northeastern Pacific Ocean being abnormally warm just over a week ago. There was a new strong hotspot developing, with ocean temperatures over 4°C warmer than normal over a wide area. 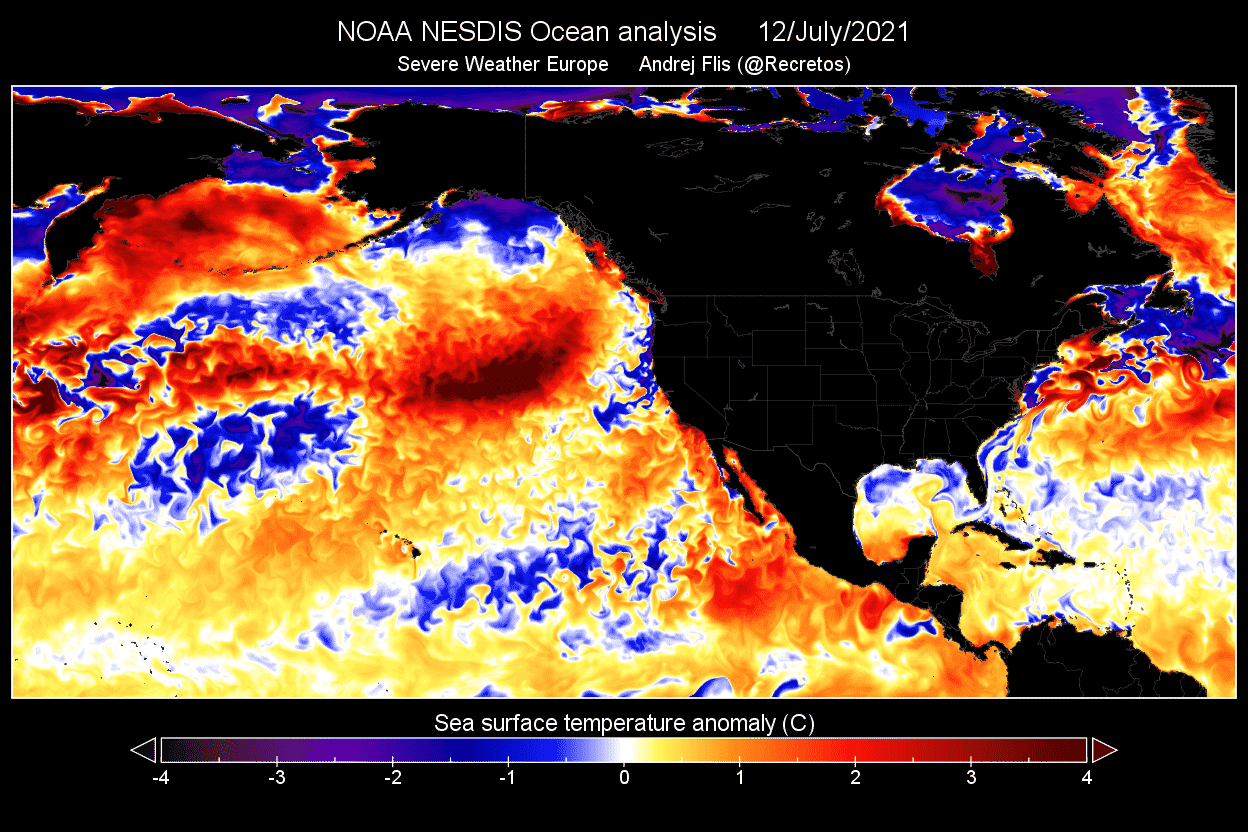 The latest temperature anomaly analysis shows that the hotspot has perhaps moved a bit towards the south. But the strong warm anomalies are now extending across the entire North Pacific Ocean, all the way back towards east Asia. 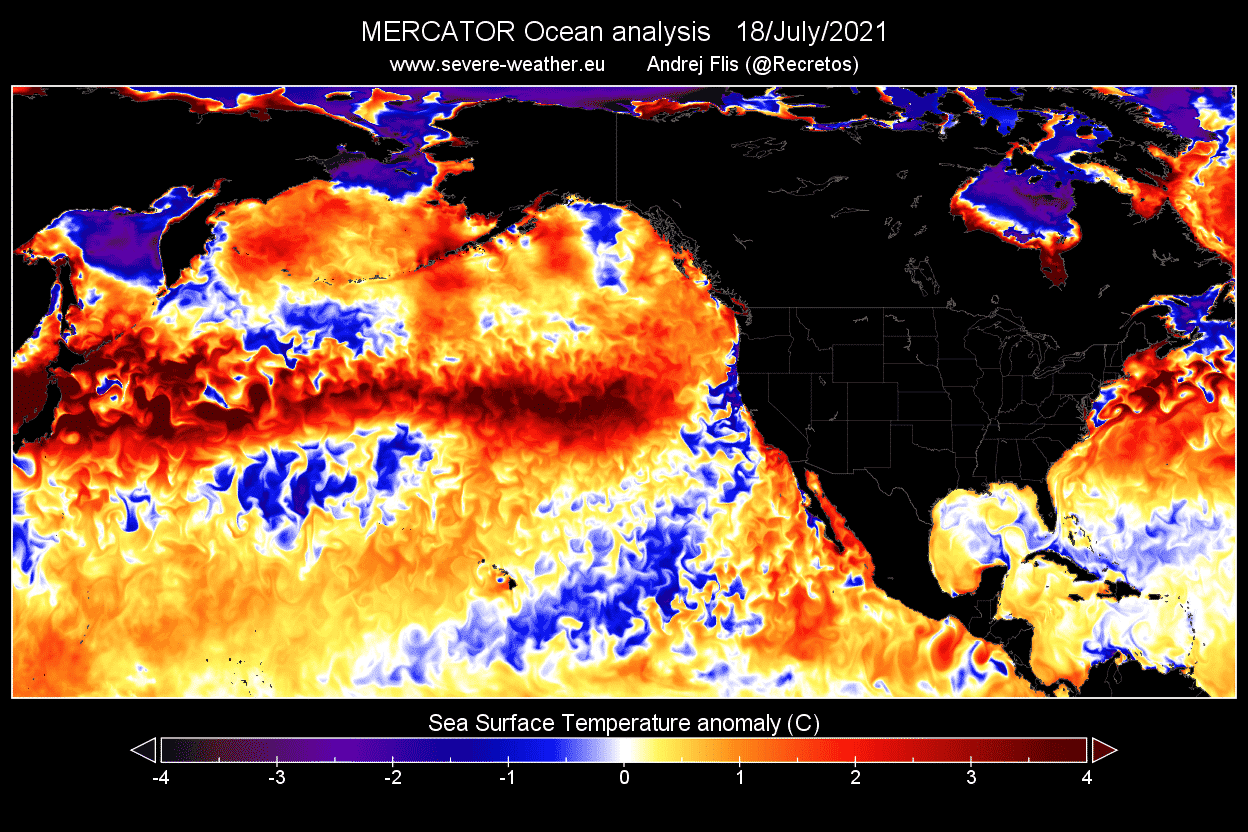 Week 2 of July has seen the return of the high-pressure system into the North Pacific ocean. It was extending all the way from East Asia towards the west coast of North America. This is also the reason why the stable strong warm anomalies have appeared again on the ocean surface.

The coral reef watch program from NOAA has detected these anomalies as developing hot spots. NOAA keeps a regular track of the ocean temperatures and anomalies, due to the important global effects on the marine ecosystem. 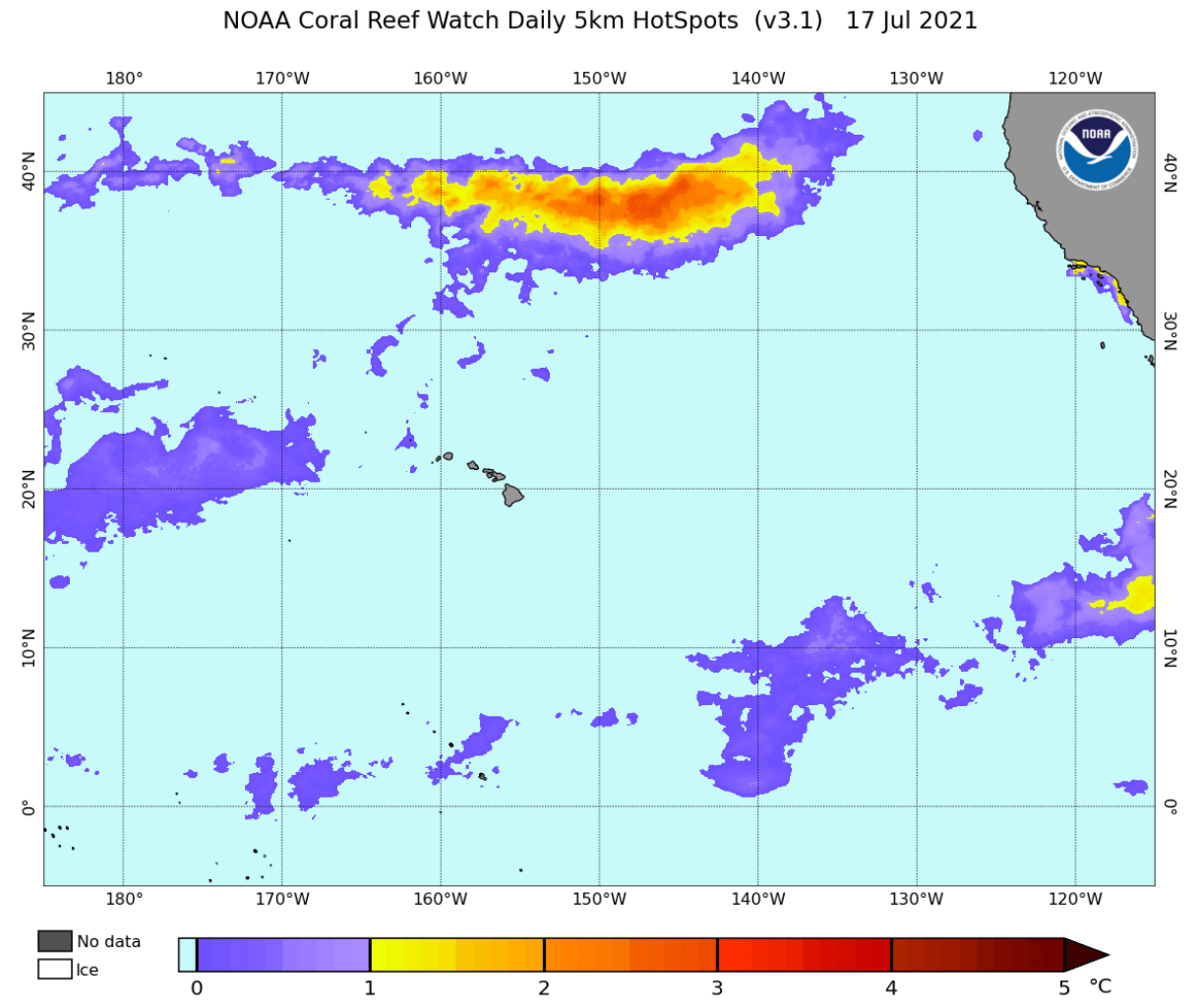 The coral bleaching alert system has also detected this North Pacific heatwave, being at the warning level for coral bleaching. But this is not a concern as the water there is too deep, with no corals at the surface level. But if there were, the temperatures would be hazardous for the corals and their ecosystem over a wide area. 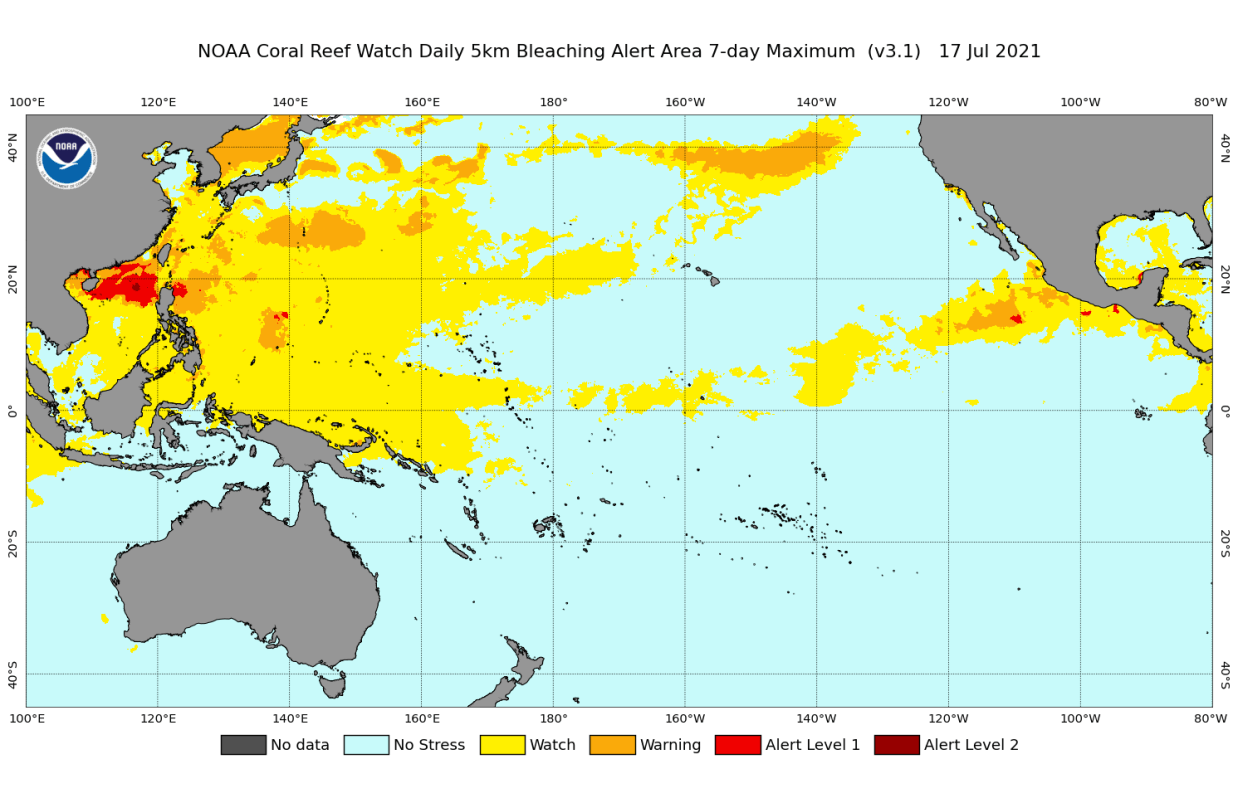 Temperature trends from the NOAA analysis also show the strong warming temperatures in the North Pacific. Some of this temperature increase is also seasonal, as the Northern Hemisphere is in the middle of the Summer season. But most of this increase is related to the developing ocean heatwave, from wind and pressure patterns. 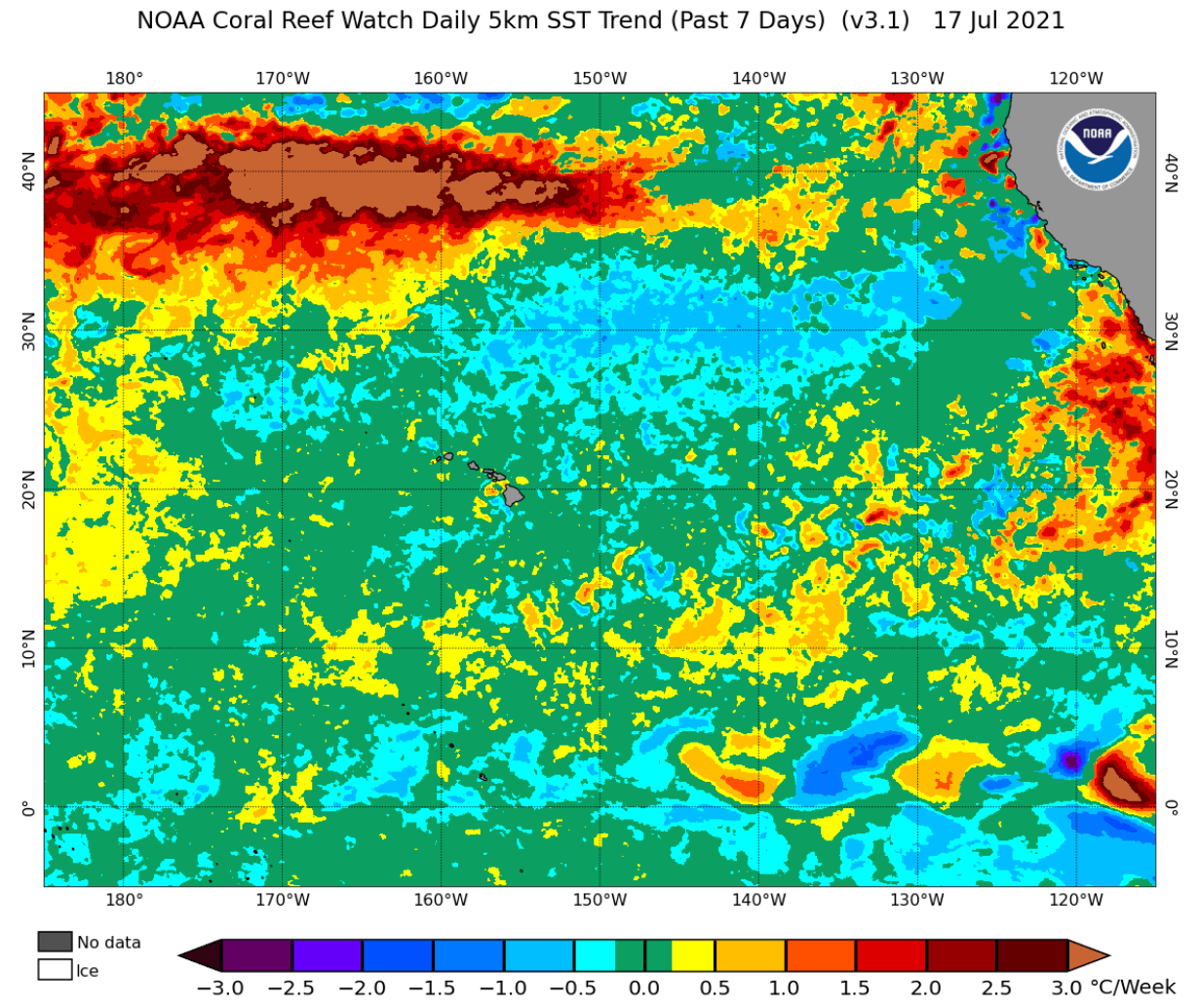 Temperature anomaly change in the last 15 days also shows the warming line, with some cooling north and south of it, due to wind changes. 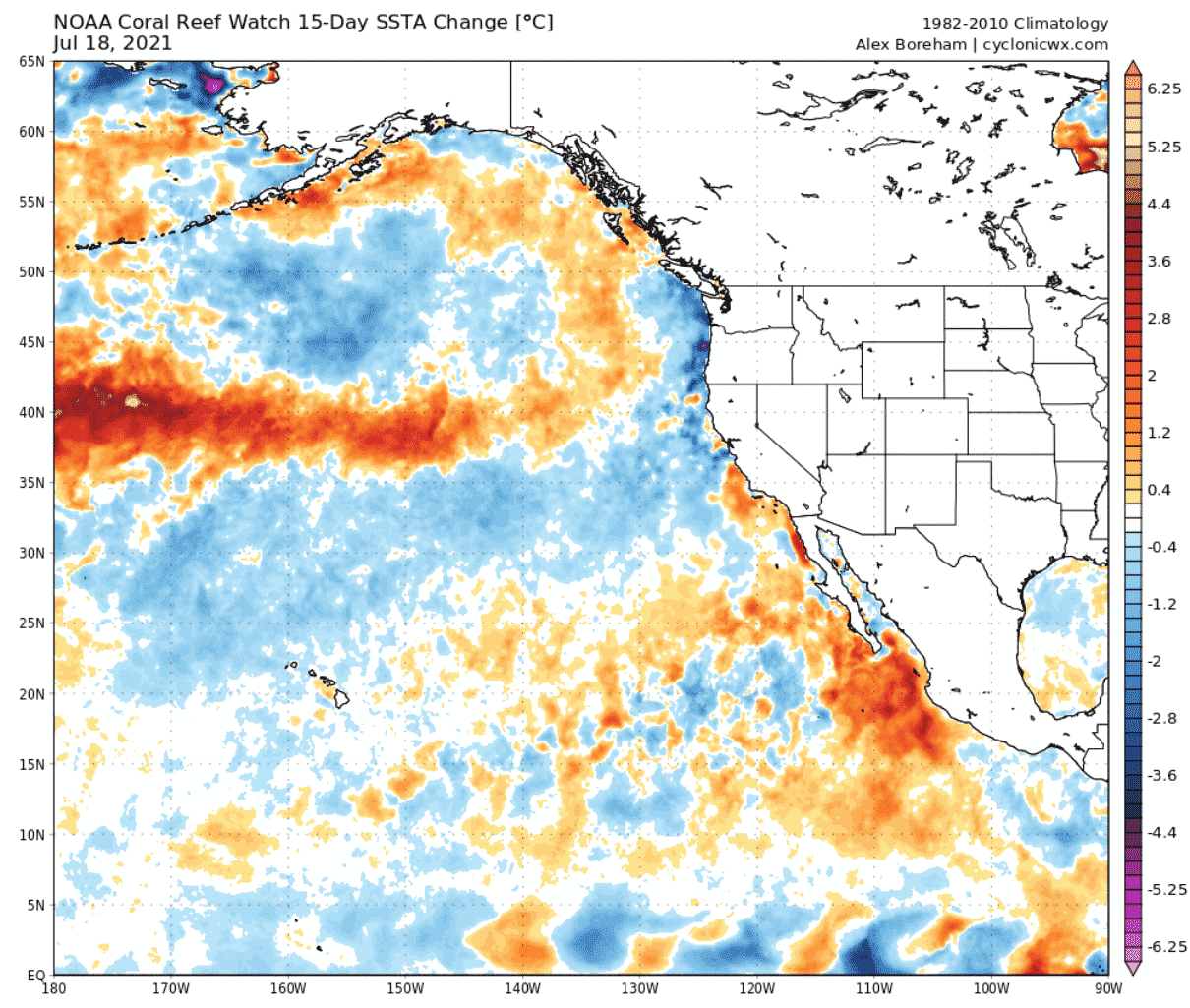 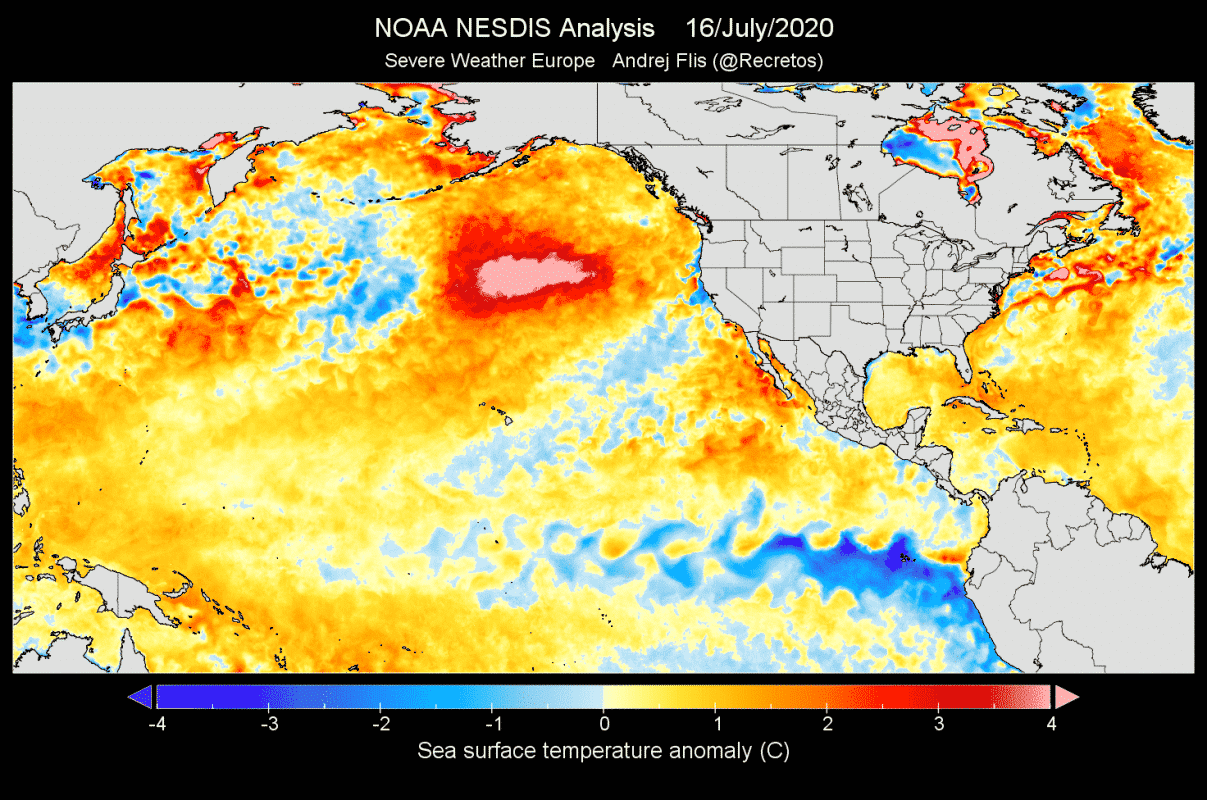 Another strong event was in 2014. A warm anomaly began developing during the winter of 2013/2014. Yes, ocean heatwaves can happen during the winter. They are not defined by raw temperatures, but by the deviation from the normal anomalies.

These events can cause unusually warm ocean temperatures, which can affect marine life throughout the year. This was just the beginning, as the Northeast Pacific ocean remained warmer than normal throughout 2014. 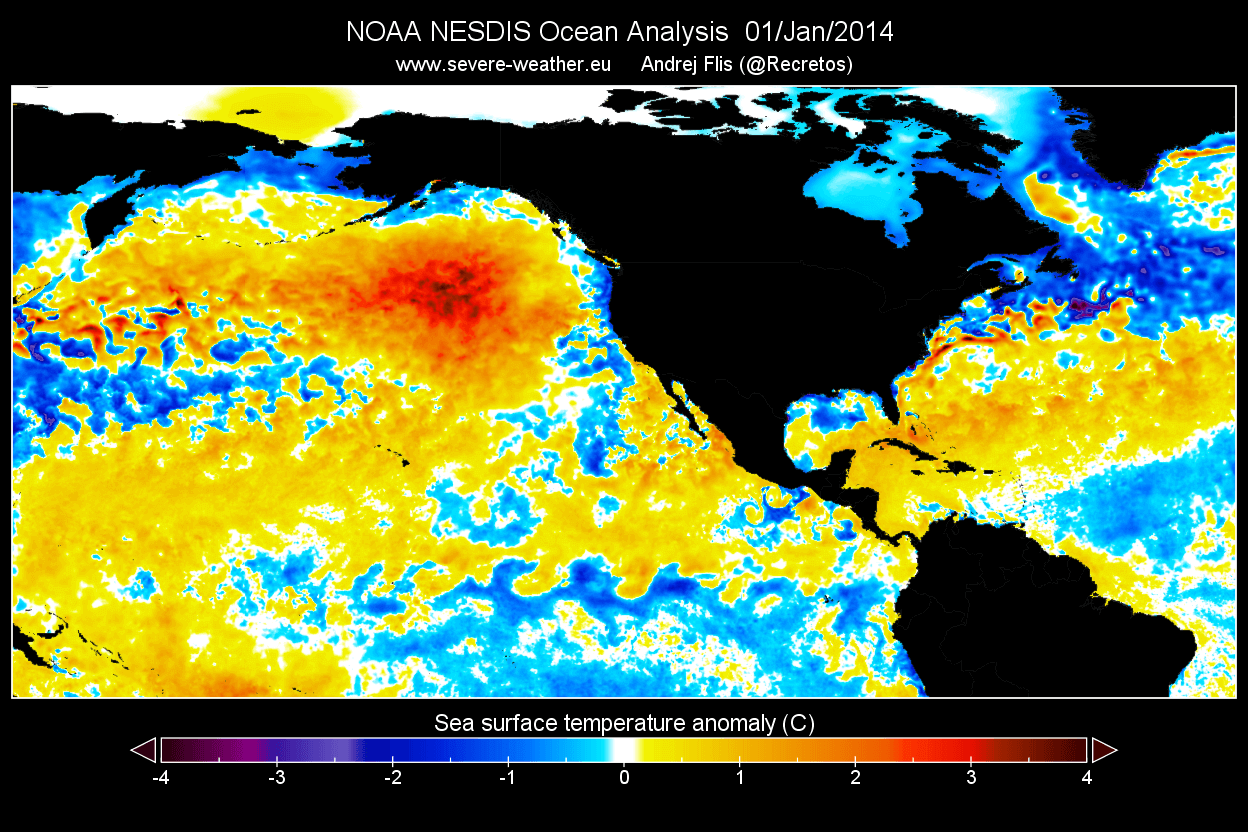 Another warm phase developed later that year in September, in a similar location. This whole event lasted throughout 2014 and into 2015. Warmer than normal waters were present closer to the coast, and also extended over a larger area. This oceanic heatwave was much more robust than the current one or last year, as the strong anomalies reached over 100-meters in depth. 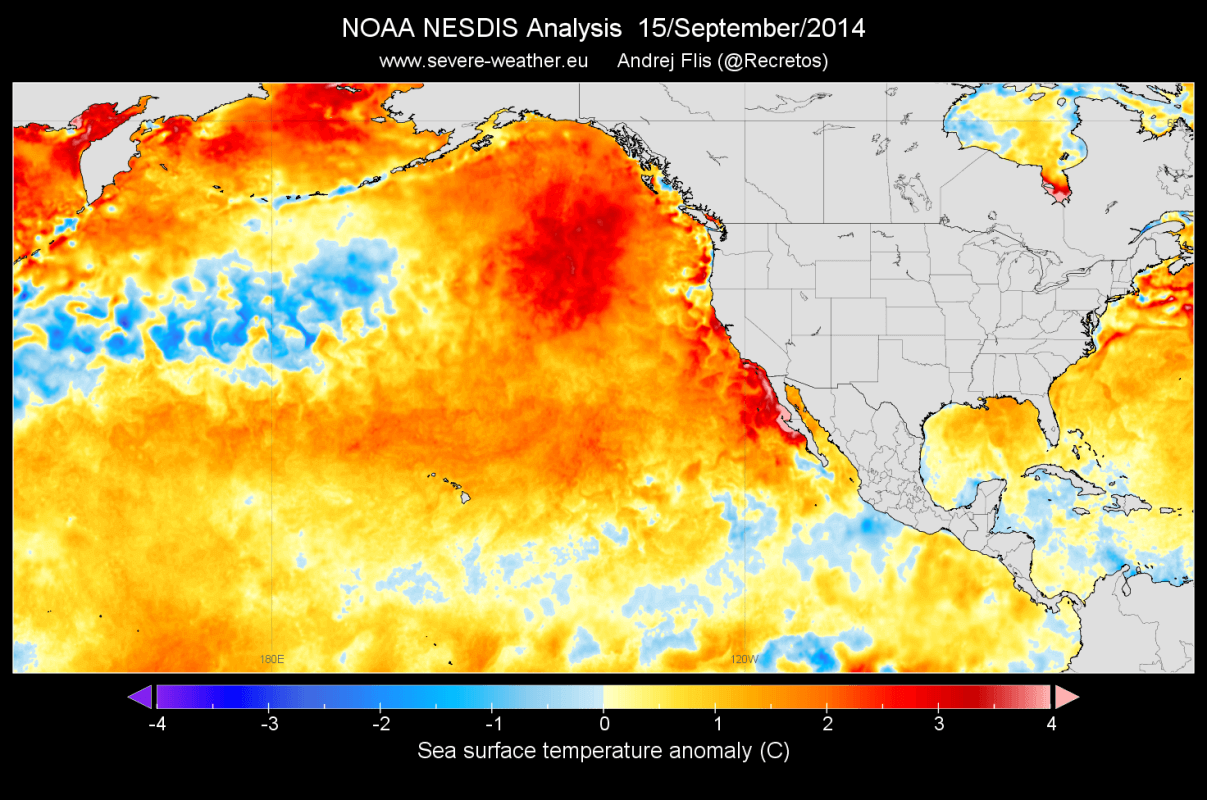 Below you can see a graph that we produced and shows the ocean surface temperature anomalies in the North Pacific ocean. You can see that there was constant phasing of warmer and colder phases. But in the last 10 years, we are detecting unusually strong warm phases in the North Pacific, which are manifested as these strong oceanic heatwaves. 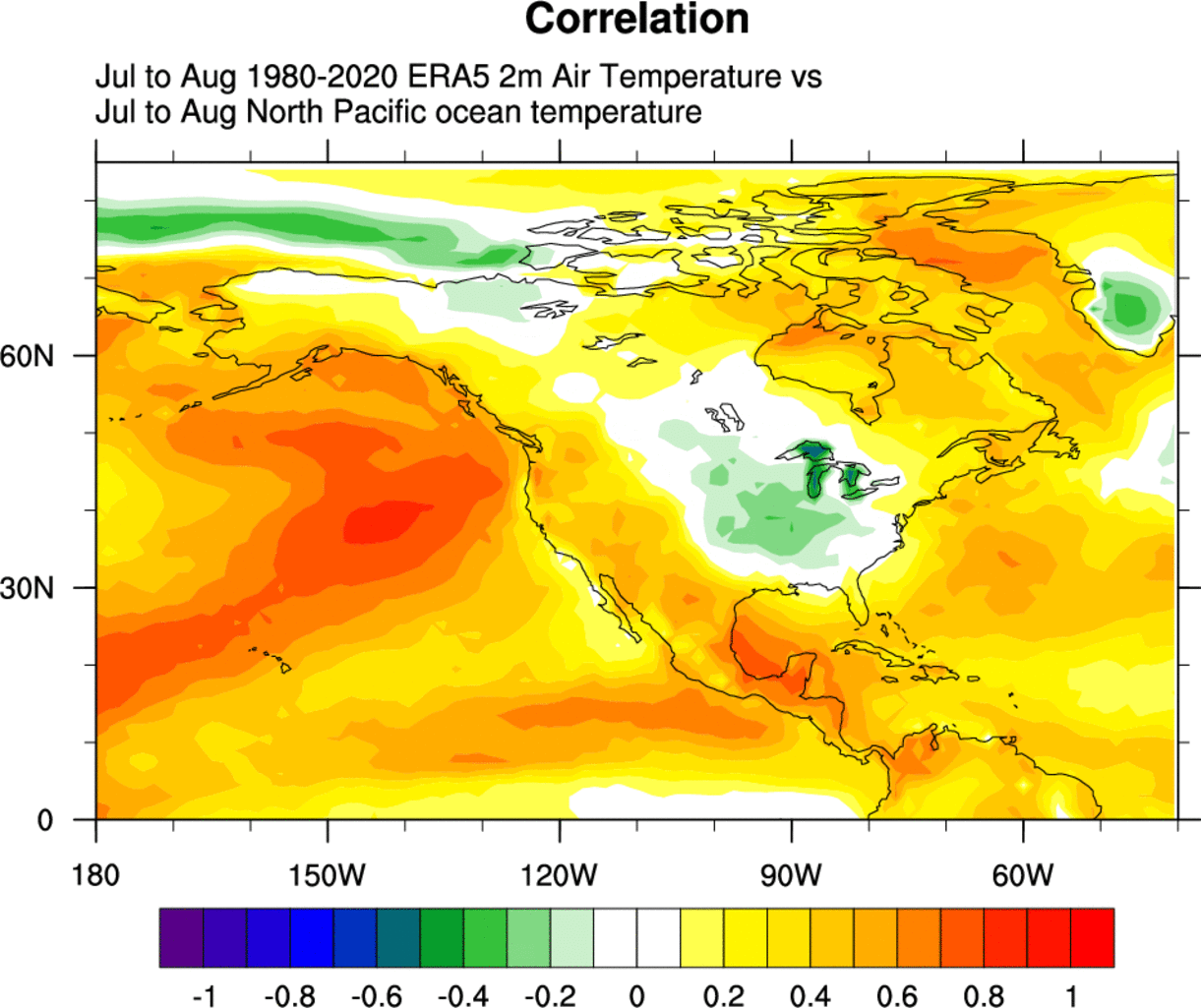 It is obvious right away that there is a strong linkage with warmth in the North Pacific, which is obvious, as that is what we are comparing it to. But it is interesting to see that we have an indication of colder than normal anomalies over central and eastern United States.

Below we have a temperature forecast for the next few days, and this is exactly the same pattern that we have seen on the analysis above. You can see colder than normal temperatures in the south-central and eastern regions of the United States. Warmer temperatures extend from the western United States up into the northwest United States and southern Canada. 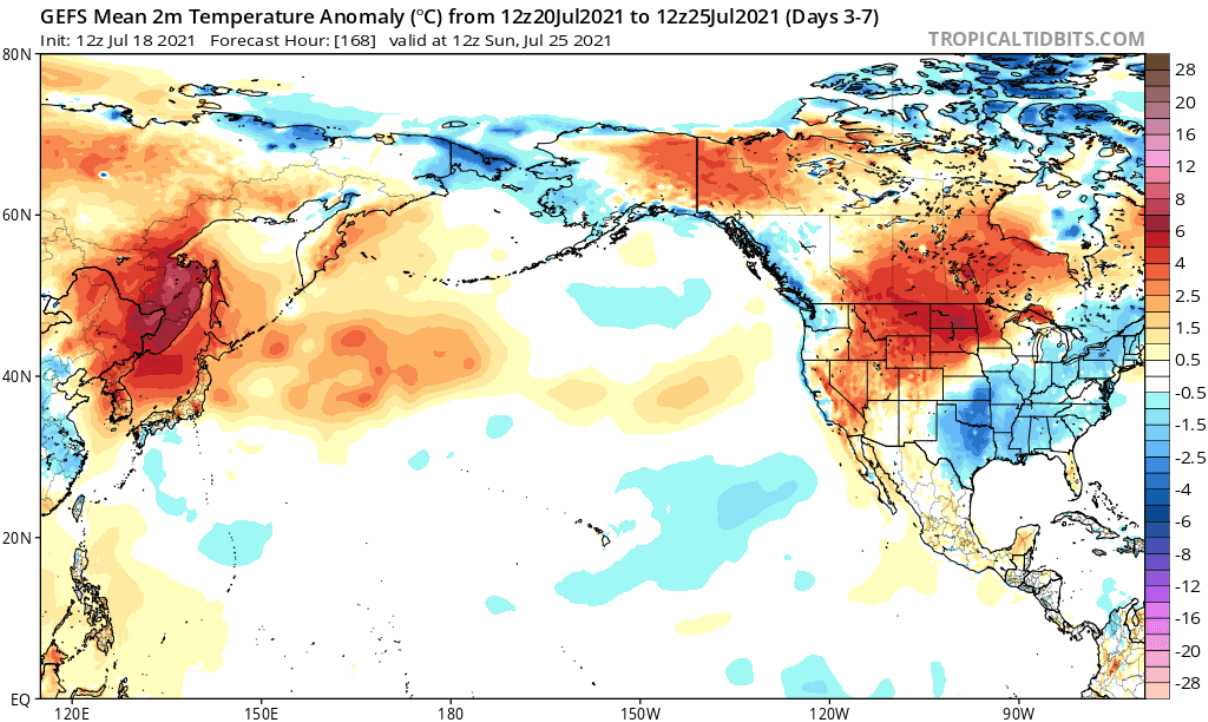 This is all connected to the pressure patterns, which produce both the ocean heatwave and also the temperature response over North America. So in a way, we could say that the ocean anomalies in the North Pacific can act as an indicator of the weather patterns, with the cooling of the south/central and eastern United States as the side effect.

Below is the pressure anomaly forecast for the upcoming week, where we can see the strong dominating high-pressure system in the North Pacific. This will continue to support the developing ocean heatwave, likely extending it well into August 2021. 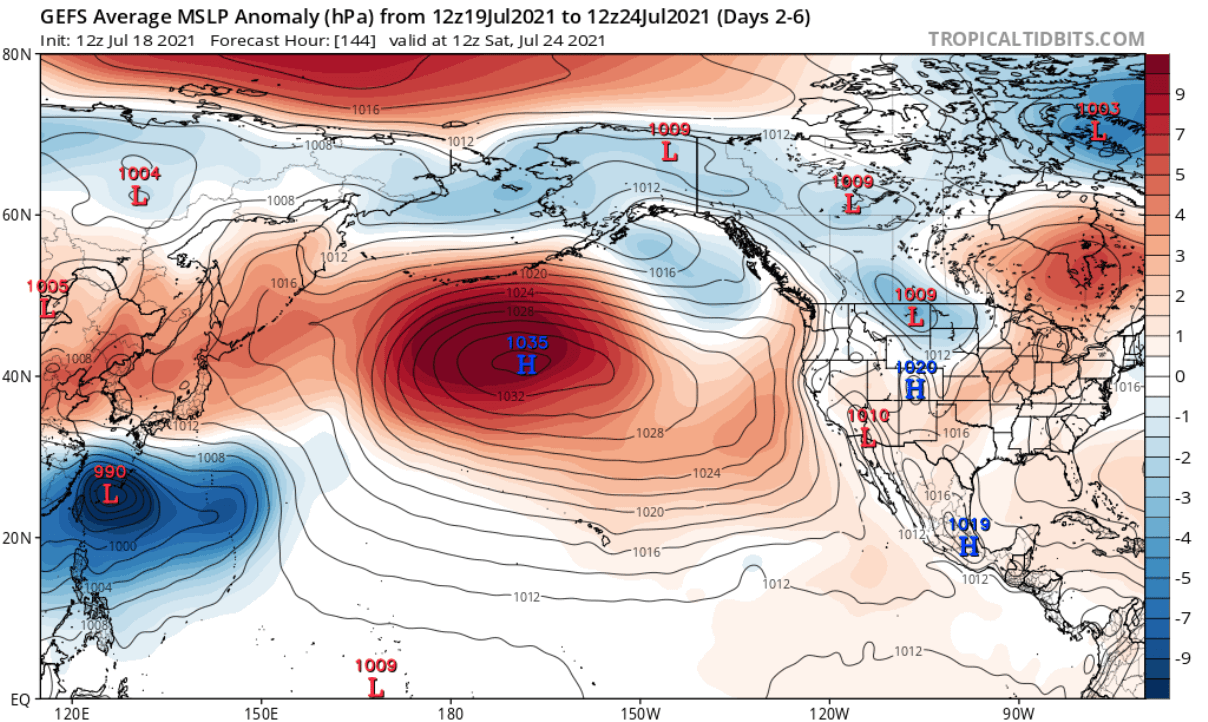 The weekly ocean anomaly forecast for late July shows some cooling in central North Pacific, while the hotspot in the eastern region remains. 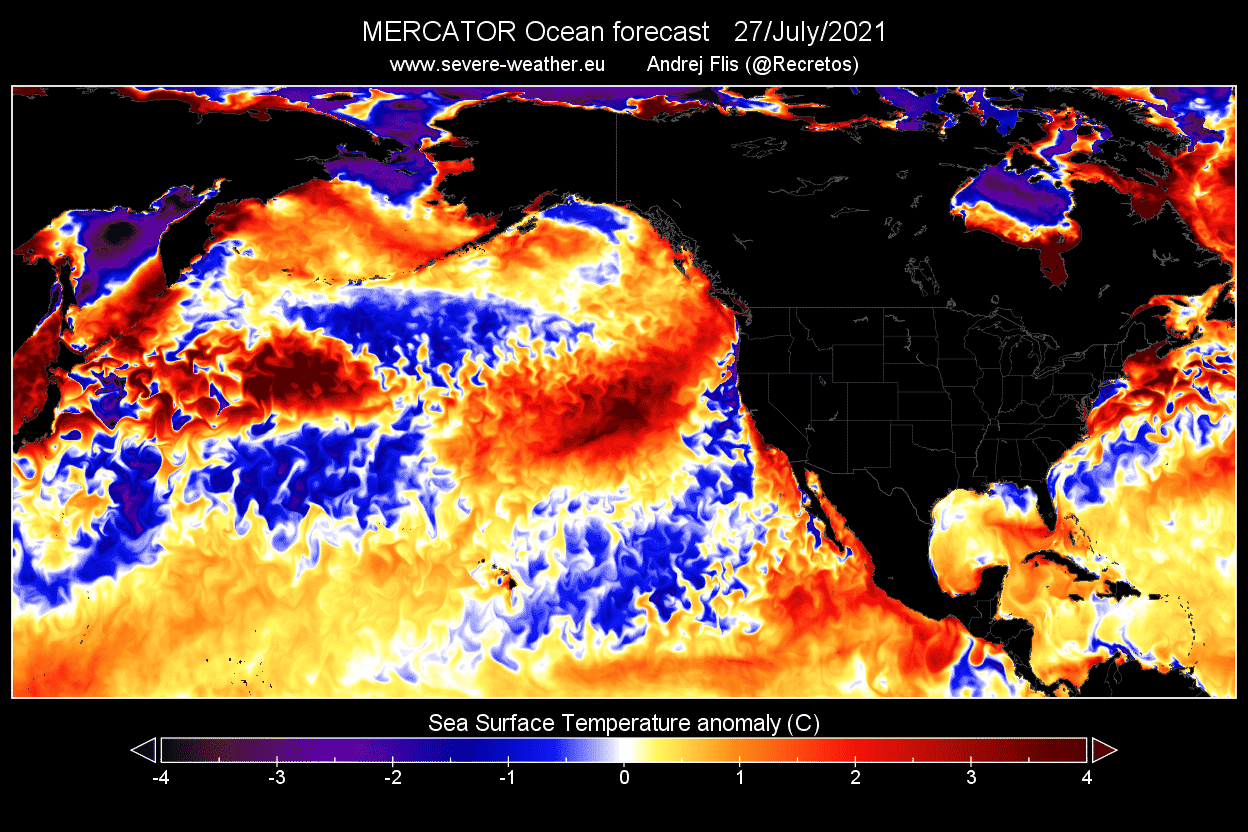 The monthly ocean temperature anomaly forecast from the CFSv2 model supports the idea of this ocean heatwave to continue into August 2021.

In 2015, higher mortality of marine mammals was observed, from sea lions in California to fin whales in the Gulf of Alaska. Harmful algal blooms were also observed.

There were also a lot of unusual sightings of warm water species, including ocean sunfish that was up in the Gulf of Alaska. The whole marine ecosystem was impacted, from the smallest bacteria to larger mammals.

It is not yet known what major effects (if any at all) the current heatwave will present. A lot depends on how long it lasts and how strong it will be during the process. Long-range model forecasts are indicating that these warm anomalies could extend even into Autumn. This could be a cause for concern since the anomalies are closer to the coastal areas.

A new tropical cyclone In-Fa (Storm Fabian) forms in the Philippine Sea, expected to become an intense typhoon as it heads for Miyakojima and Taiwan late this week