There is a new Super Typhoon in the western Pacific now, Kong-Rey has gone through a really incredible rapid intensification over the past 24-36 hours, from a Category 1 into a Category 4+/5 in less than 36 hours! The eye has become bigger and the eyewall is closed, very intense convection is ongoing in it. Based on the ‘Advanced Dvorak Technique’ (satellite analysis) the estimated central pressure is around 917 mbar and max sustained winds around 140 knots – that is 160 mph which puts Kong-Rey into Category 5 strength!

The impressive satellite presentation suggests additional strengthening is likely for another 24 hours and we could be seeing the strongest tropical system of the year tomorrow. Cloud tops have cooled down even under -80 °C which is a very rare occurence. Here is a visible satellite view of Kong-Rey during the evening hours, it is a very large system and we can see intense convection around the eye.

Here we go! As expected, we have a new Super typhoon ongoing. Kong-Rey is now a solid CAT 5 typhoon – based on ADT satellite analysis the estimated max sustained winds are likely around 160mph winds and central pressure below 920 mbar. What an incredible storm! pic.twitter.com/p39rVdB45Y

#typhoon Queenie / Kong Rey, has quickly developed to Cat5 and has now entered the domain of the #Philippines
The frequency and magnitude of these systems is tragic.#typhoonQueenie #QueeniePH #KongRey #climatechange #ClimateAction pic.twitter.com/hWWAGEmyQK

Here is are Advanced Dvorak Technique (ADT) graphics for Kong-Rey: it has estimated max sustained winds of 140 knots or 160 mph which is a solid Category 5 strength!

The future path puts the Typhoon towards the Japan’s Ryukyu islands on late Friday and Saturday; Kong-Rey will likely weaken due to cooler waters prior the landfall there, but more about the potential impact on the later updates. 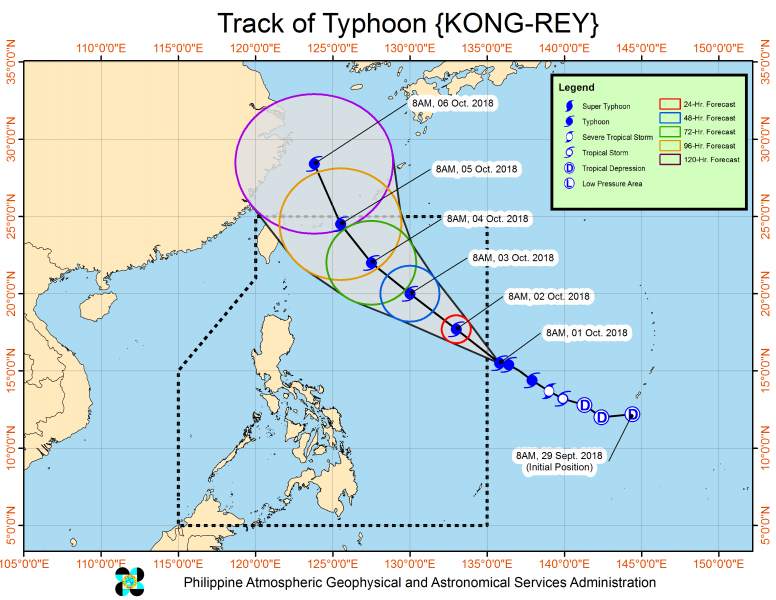 Latest analysis of OHC (Ocean Heat Content) along Kong-Rey’s path suggest it has favorable conditions for additional intensification until it arrives into colder waters – those are the result of the CAT 5 Typhoon Trami last week, which mixed the near-surface layers and resulted in significant upwelling.