We currently have two tropical storms ongoing – Tropical Storm Paulette and Rene in the central Atlantic. Another potent tropical wave is soon emerging off West Africa and could be the new storm Sally in the next days. Potential is increasing the system could become a hurricane over the Central Atlantic next week.

A tropical wave is forecast to emerge off the west coast of Africa tonight into Thursday. When the wave finally moves over the warm waters of Eastern Atlantic, gradual development is expected.

A tropical depression is likely to form late this week into the weekend days.

Explosive storms are seen on the satellite imagery, precisely over western Senegal, The Gambia, and Guinea-Bissau. The activity is gradually advancing westward and should soon emerge into the Eastern Atlantic. 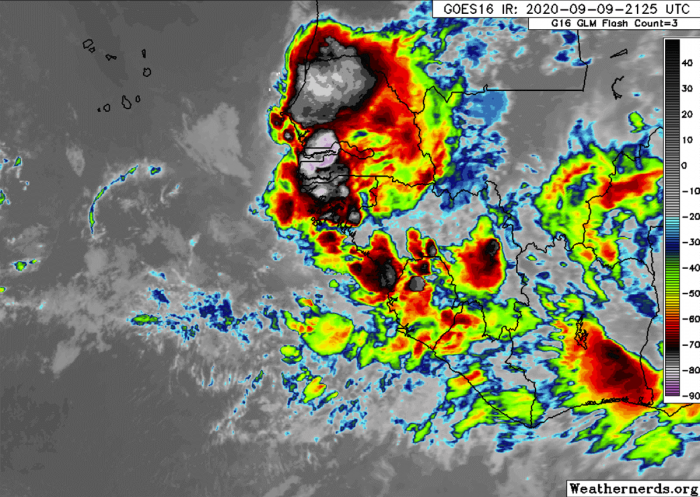 The system should then move generally westward in the following days and start strengthening the wind field into a tropical storm force – we could be seeing a new tropical storm by the weekend.

Currently, the tropical wave is over the West African countries, soon emerging into the very warm waters of Eastern Atlantic near Cape Verde. 27-28 °C sea surface temperature is observed, around 1 degree Celsius above the average.

Steering flow should push the wave first west until the weekend, then gradually moving more west-northwest next week. Sally would track across very warm waters throughout its lifetime. 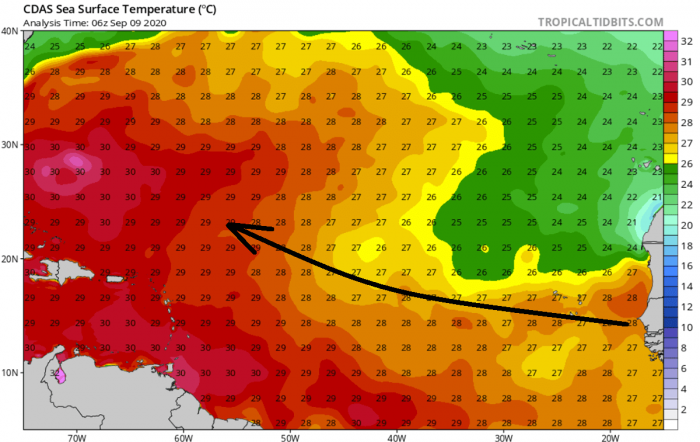 If Sally indeed reaches the extremely warm and boiling hot Western Atlantic, the potential is there for explosive development and going towards the hurricane strength. Temperatures of more than 31 °C are spread around the Bahamas.

The NHC has the potentially developing tropical depression/storm over the Eastern Atlantic in the next 5 (five) days. Chances are higher than 60 percent.

There are also three other tropical systems active right now. A tropical storm Paulette and Rene while a weak tropical disturbance is moving heavy rains towards Southeast US coast. 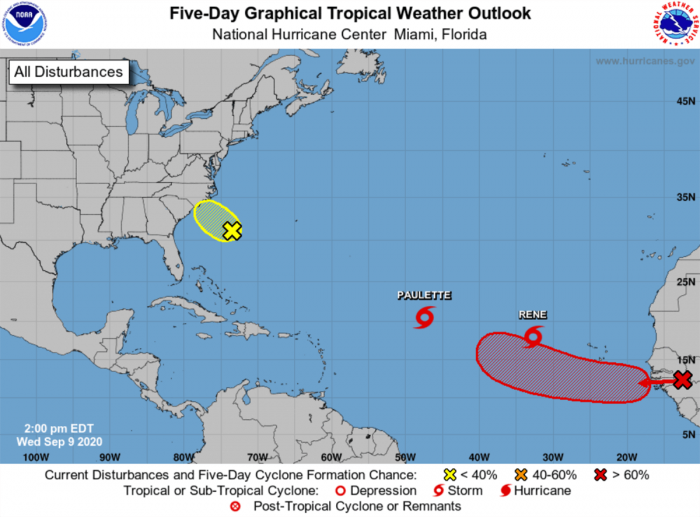 Both GFS and ECMWF models are picking the system up in their outputs. While, for now, the GFS model is the most aggressive, the ECMWF model hints to a generally northwestward track of forthcoming storm Sally over the next 5-7 days. 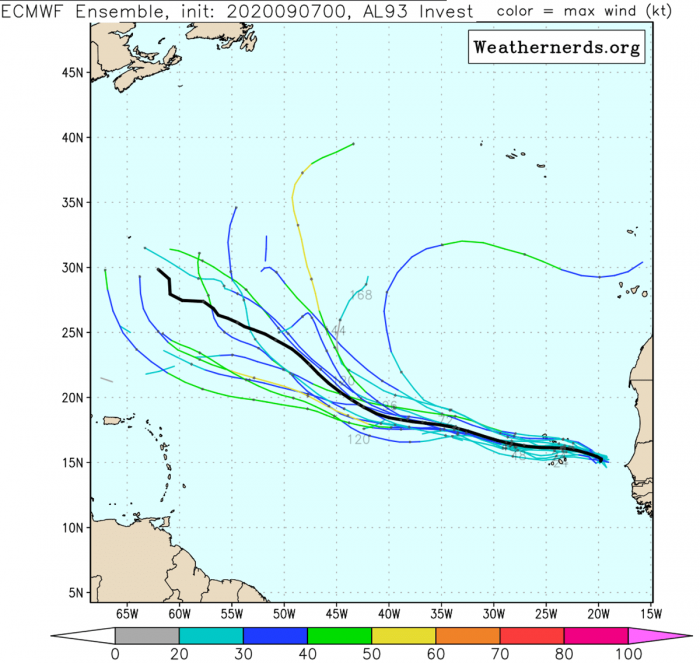 Nevertheless, guidance from both global models suggests the system could become a hurricane next week. But indeed, evolution is yet to be defined and many uncertainties exist.

Here is a quite impressive graphics by Ventusky, indicating a wind gusts swath along the potential track of Sally after this weekend into next week. 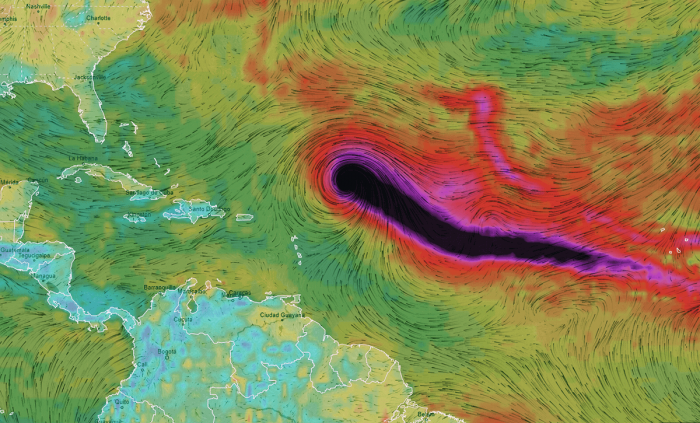 Tropical wave emerges into the Eastern Atlantic, to the east-south of Cape Verde islands on Thursday and Friday. Notice storms Paulette and Rene further west. And also a disturbance over the Azores. 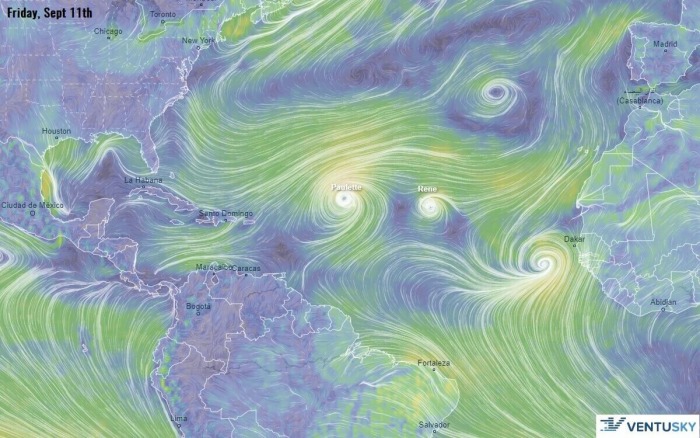 By the end of the coming weekend, depression moves due west towards the Central Atlantic. It is likely it will reach Tropical-storm-force and become a new system, Sally. 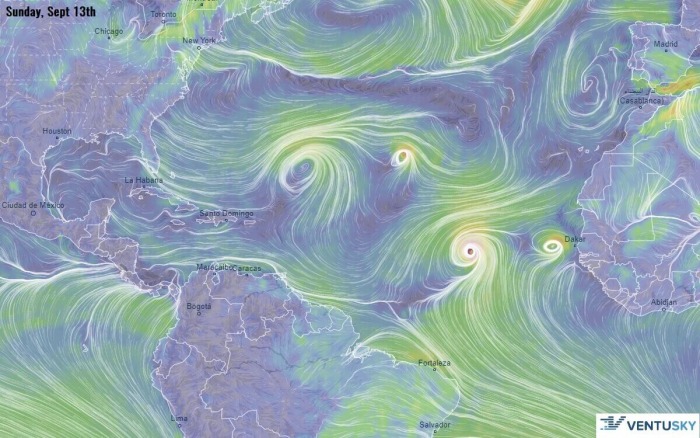 On Tuesday, models are hinting the beginning of a stronger strengthening while Sally starts turning more west-northwest. Notice also the storm Paulette becoming quite strong near Bermuda.

Through mid next week, Sally could even develop into a hurricane while taking a more northwesterly curvature. The model is quite obvious regarding its higher intensity. 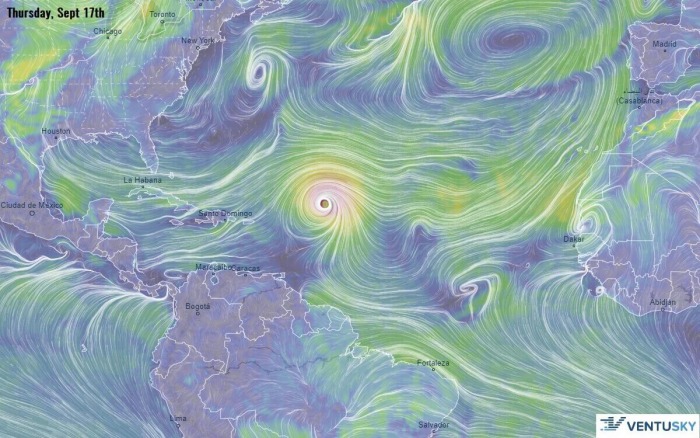 Keep in mind both GFS and ECMWF are generally trending into the more westerly track over the last runs, so the evolution has to be closely monitored.

Tropical Atlantic has ramped up lately. Tropical Storm Paulette and Rene are ongoing where Paulette is heading towards Bermuda in the coming days while gradually strengthening. 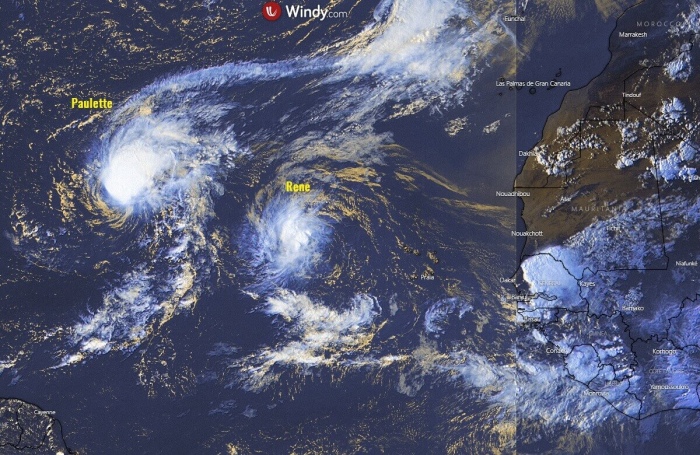 Recap: An increasing potential seems to exist for the tropical wave emerging into the Eastern Atlantic tonight. High chances for a tropical formation – storm Sally – are there. Favorable oceanic and environmental conditions are present across the Eastern and Central Atlantic.

We will continue monitoring the evolution of this potentially significant tropical system developing – stay tuned.