A major hurricane Lorenzo remains an impressive system, now beginning to accelerate towards NE. It is packing sustained winds of 110 mph ( = 175 km/h) – a strong CAT 2 system – with central pressure around 952 mbar. Peak gusts are reaching around 220 km/h, confirmed by the latest NOAA recon aircraft pass.

Water Vapour satellite image of Lorenzo this morning, Sept 30th. Lorenzo is a very large hurricane with a well-defined outflow and continues towards the Azores today. It is expected to pass just to their west early Wednesday morning. Meanwhile, a cold front is visible extending from the surface low west of the UK across the Azores towards Lorenzo as well. 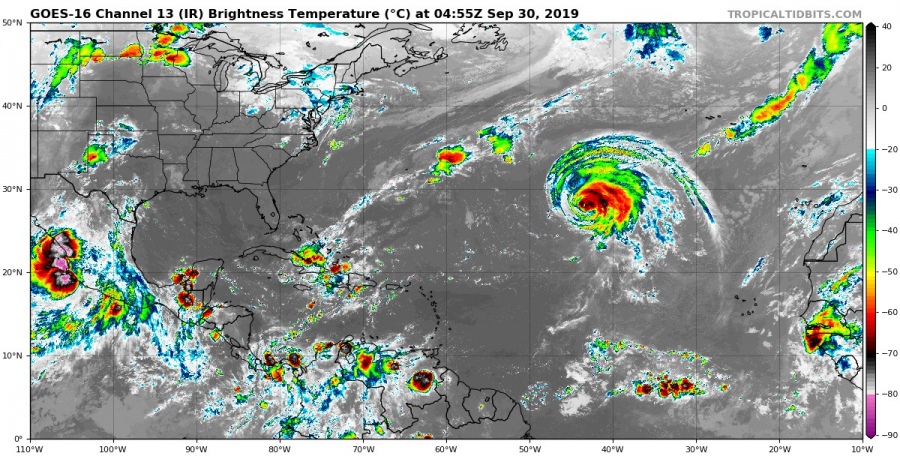 Lorenzo has a small cloud-filled eye visible with a large cloud shield expanding across the northern half of the system. It remains a very large system with a doubled area of hurricane-force winds, although its overall strength has additionally weakened since yesterday. National Hurricane Center (NHC) has issued a Hurricane Watch for the Azores as hurricane-force wind field is expected to expand over the at least western and central parts of the archipelago by late tomorrow, Tuesday, Oct 1st. Official NHC track the most likely arrival times of the tropical storm winds reveal the potential still exists Lorenzo would brush the UK and Ireland towards the end of this week. 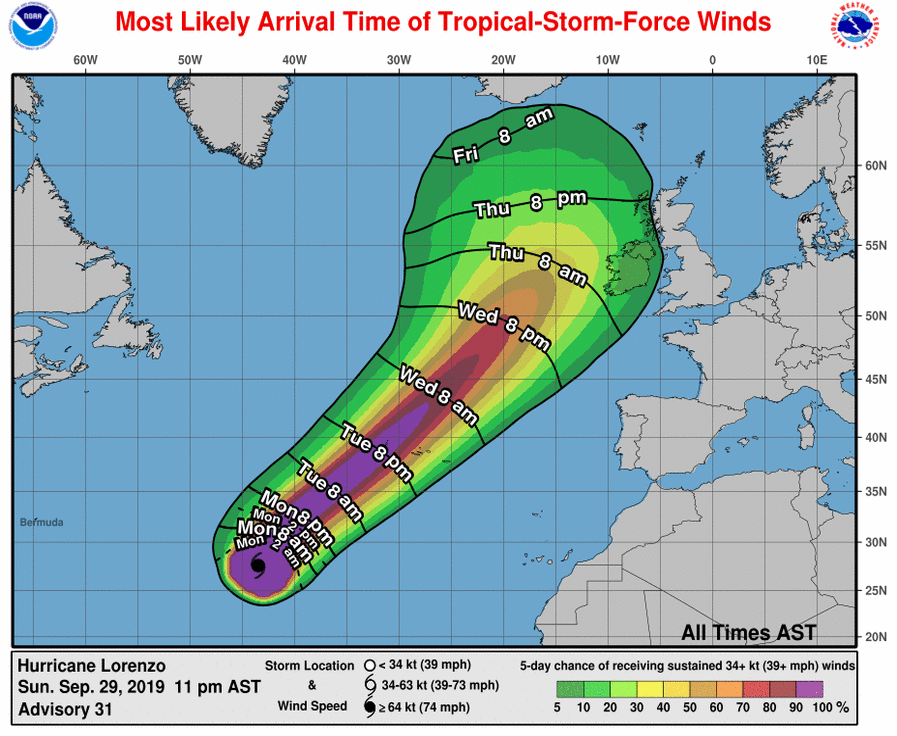 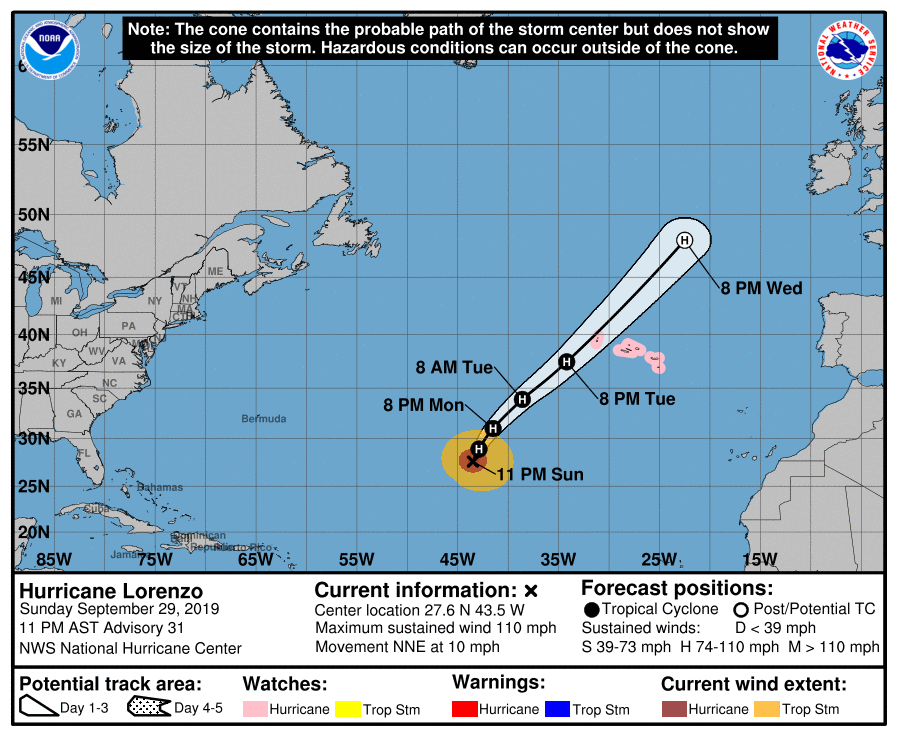 Lorenzo will continue gradually weakening during the next days as it’s moving into cooler waters but should likely remain a strong CAT 1 or even a CAT 2 hurricane while it moves near the Azores early Wednesday. The future track is likely to bring its center just shy west of Azores, meaning Azores will be in a direct front NE/SE quadrants at that time. Hurricane-force winds are expected over the islands, likely peaking with extremely severe wind gusts near 160-200 km/h, even higher across the elevated terrain. Additionally, high storm surge and major 10m waves are expected as well, especially across the westernmost and central islands of Azores! 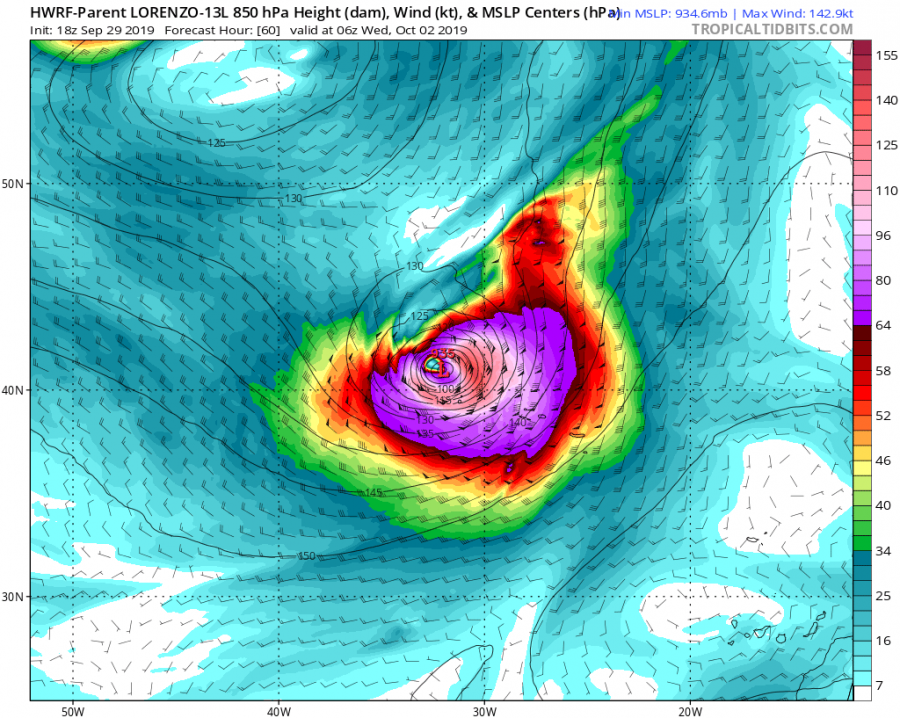 After Wednesday, Lorenzo will likely continue north, moving west of the British Isles and Ireland towards Iceland. However, the potential track beyond Thursday remains uncertain. But one thing is clear, Lorenzo will continue as a very powerful system even after the transition to an extra-tropical system on Thursday. Some of the models are hinting Lorenzo’s central pressure might maintain well below 940 mbar, even near 930 mbar or lower at some point. This suggests the wind field will remain very intense and large for a few more days. 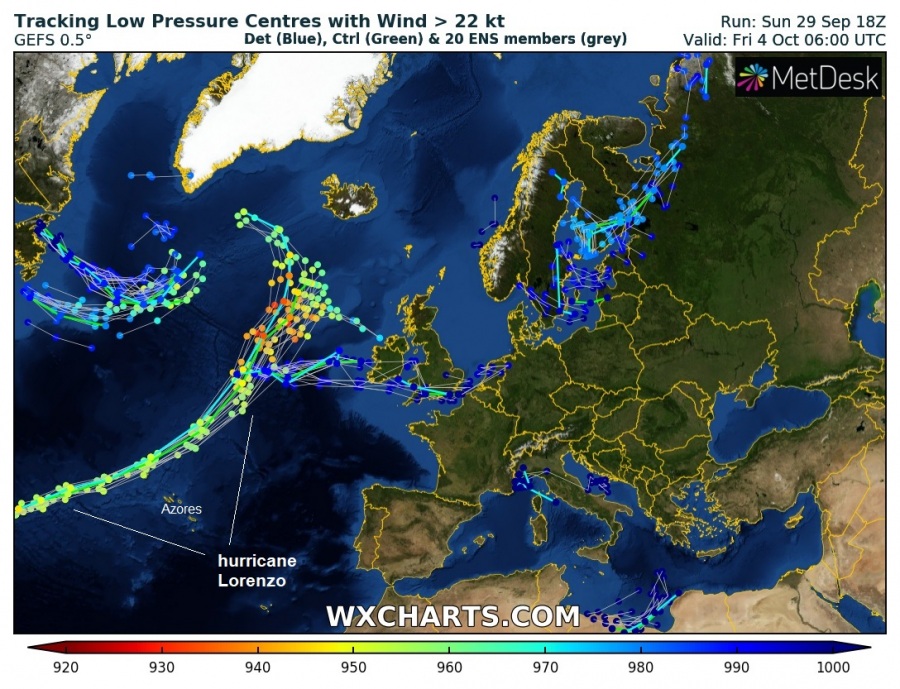 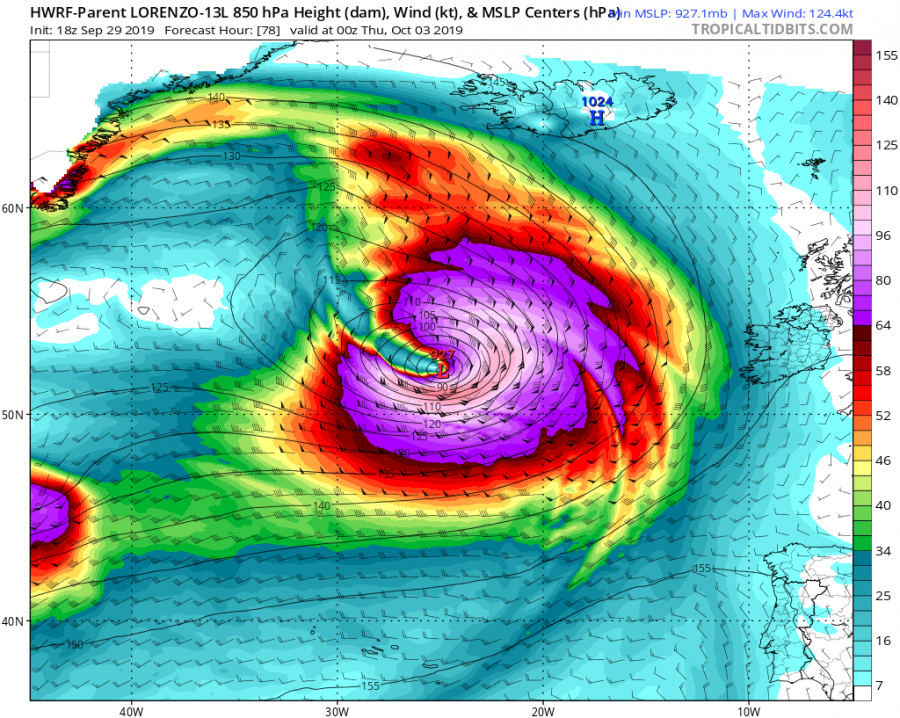 Simulated peak gusts per GFS and ICON-EU models revealing the potential for extremely dangerous winds is high, gusts would possibly reach near 200 km/h along Lorenzo’s track after the Azores as the system will remain very deep while acting as an extra-tropical system. As it usually happens with intense extra-tropical systems, development of sting jet features are very likely! 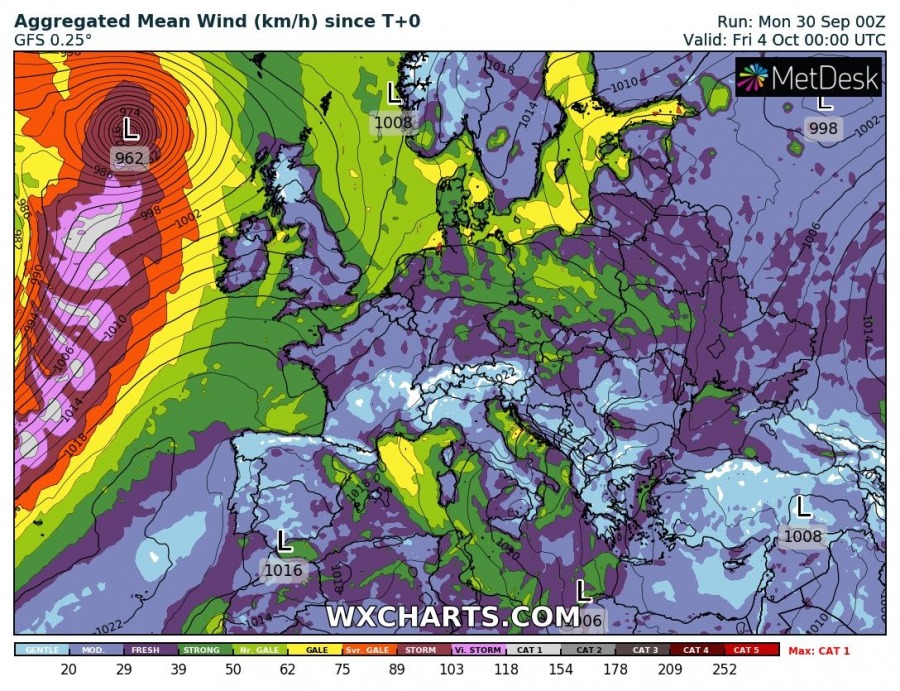 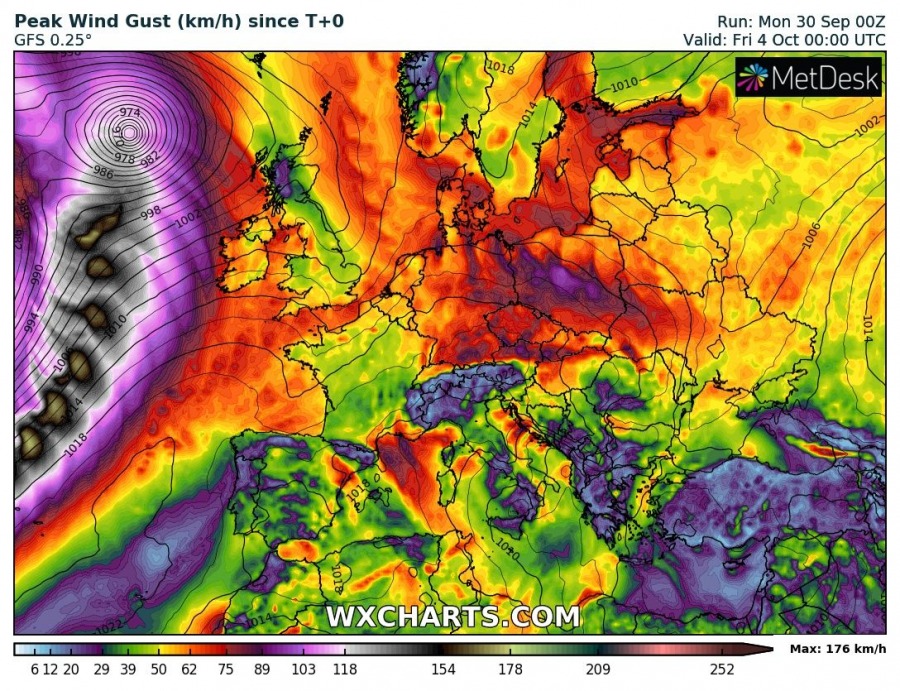 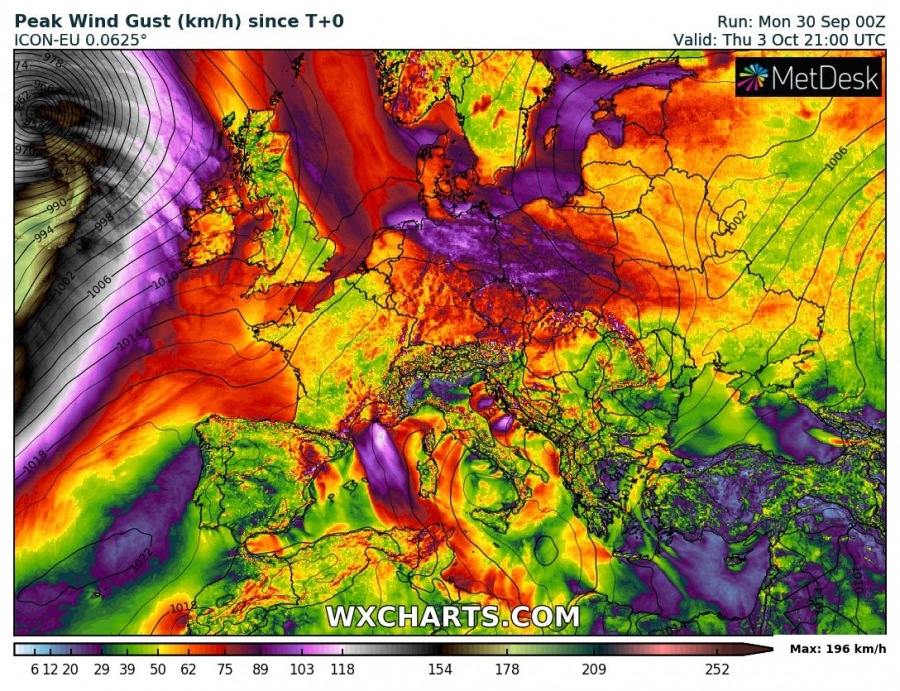 Stay tuned for additional updates of Lorenzo’s future track in the coming days.

What is a sting jet?