Iota has been upgraded to a hurricane on Saturday and is now explosively intensifying towards a major hurricane strength. It will be the 6th major hurricane of the Atlantic Hurricane season 2020. Model guidance suggests that Iota will likely become a violent Category 4 hurricane and made a catastrophic landfall in Central America on Monday night. Destructive flooding and life-threatening mudslides in Nicaragua and Honduras are expected.

Iota is expected to continue to rapidly intensify into a major hurricane and be an extremely dangerous Category 4 hurricane when it approaches the coast of Central America on Monday. Just 10 days after a devastating landfall of Hurricane Eta with almost the same storm track.

According to the National Hurricane Center (NHC), Iota has become the 13th hurricane of the already record-breaking Atlantic 2020 hurricane season and has entered a rapid strengthening phase on Sunday, Nov 15th. 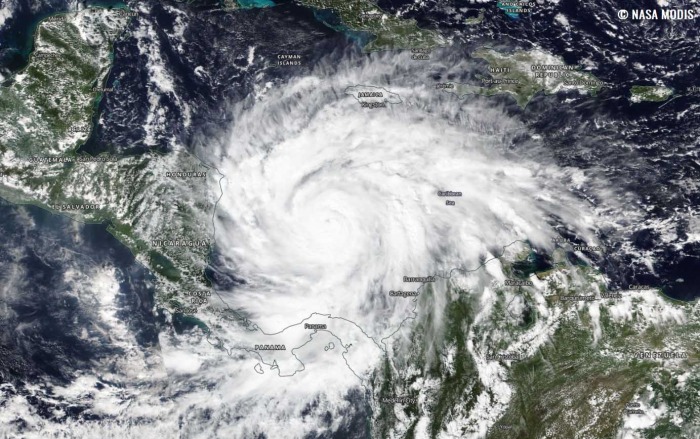 Central American countries Nicaragua, Honduras, and Guatemala are suffering a significant humanitarian crisis after the destructive impact of a high-end Category 4 hurricane Eta last week. Eta has brought a high death toll due to the remarkable amount of rainfall, lead to deadly flooding and mudslides.

And what appears likely on the model guidance regarding the track of Hurricane Iota, we are likely facing yet another deadly disaster over central America. There is a very high concern of catastrophic flooding and life-threatening event developing into Nicaragua, Honduras, and Guatemala this coming week.

Iota seems to be taking almost the same track and Eta did. 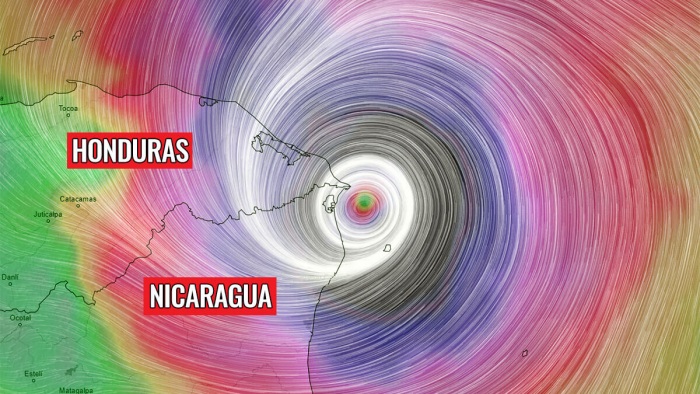 Through Friday morning, heavy rainfall from Iota will likely lead to life-threatening flash flooding and river flooding across portions of Central America. Flooding and mudslides in Honduras and Nicaragua could be exacerbated by Hurricane Eta’s recent effects there, resulting in significant to potentially catastrophic and deadly impacts.

Iota is still forecast to become a major hurricane (Category 3 or greater) on early Monday. When this occurs, it will be 2nd major hurricane to form this November (major Hurricane Eta was the first one).

This will set another remarkable record for the 2020 Atlantic hurricane season – there are no seasons on record that have had two major hurricane formations in the month of November!

When major strength occurs, Iota will also become the 6th major hurricane of the season.

Now take a look at this chart below; it is showing a comparison of 2020 versus 2005 seasons, compared to the average season percentile. The Atlantic hurricane season 2020 is remarkable! Graphics are provided by Sam Lillo. 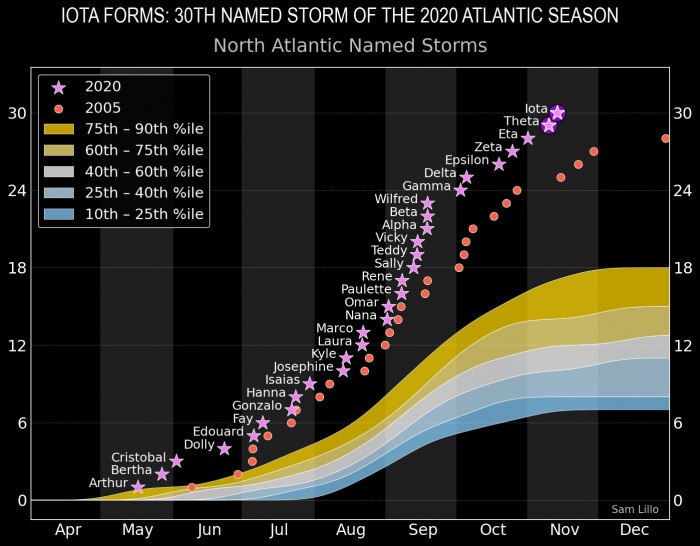 The sea surface temperatures remain very warm in the Western Atlantic, and extremely warm over the Caribbean region with around 30 °C (86 °F) across the western portions of the Caribbean Sea.

This is a very worrying signal as sea waters remain much higher than the long-term average. This means that hurricane Iota will bring a very high amount of moisture with violent thunderstorms towards Central America, leading to destructive flooding.

Graphics below are provided by Windy.com. 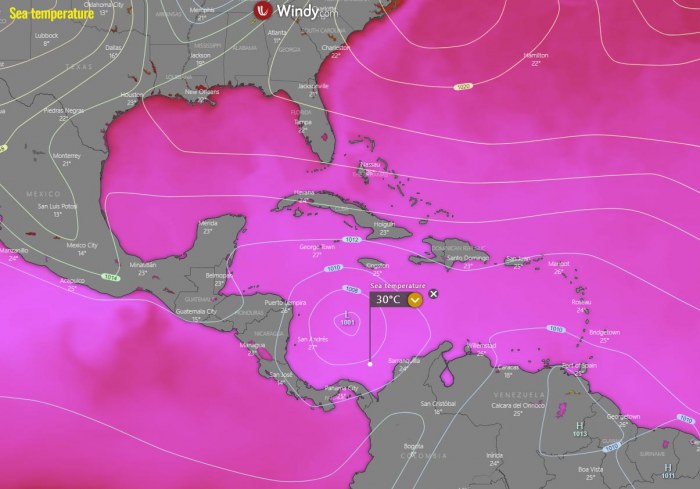 The majority of the North Atlantic, tropical Atlantic, and the Caribbean are still well-above average, about 1-2 °C warmer, even more across the Northwest Atlantic.

Waters remain warm, much above the long-term average across the whole Gulf of Mexico, around Florida, the Bahamas, and along the East Coast of the United States.

And to top this, there is still a pronounced MJO wave underway over the tropical Atlantic, ongoing since the end of September.

As we can see from the graphics below, it is a very obvious feature this week (first chart and marked with a red circle), with blue color over the Atlantic basin. On the week 1 forecast (second chart) the MJO wave will begin weakening but still not completely vanished.

So this means that it will continue lowering the pressure and providing a strong boost to thunderstorm activity in the tropical Atlantic towards through mid to end of November. 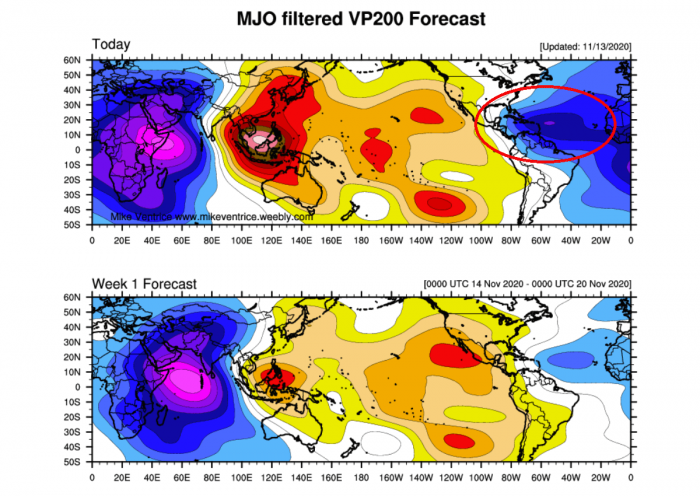 Iota is a very impressive hurricane in both visible and infrared satellite imagery. The hurricane has a well-defined forming inner eyewall, surrounded with widening and almost symmetric Central Dense Overcast (COD). Cloud tops within the eyewall have a temperature close to -85 degrees Celsius. 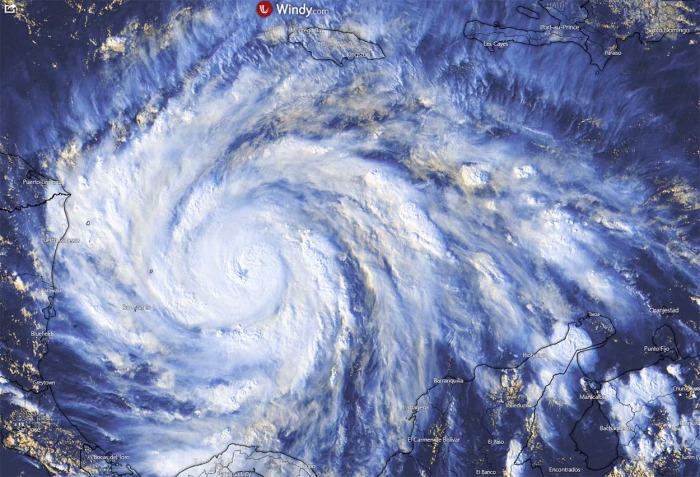 The sustained winds have increased from 45 knots to 80 knots over the past 24 hours while Iota continues further rapid intensification. 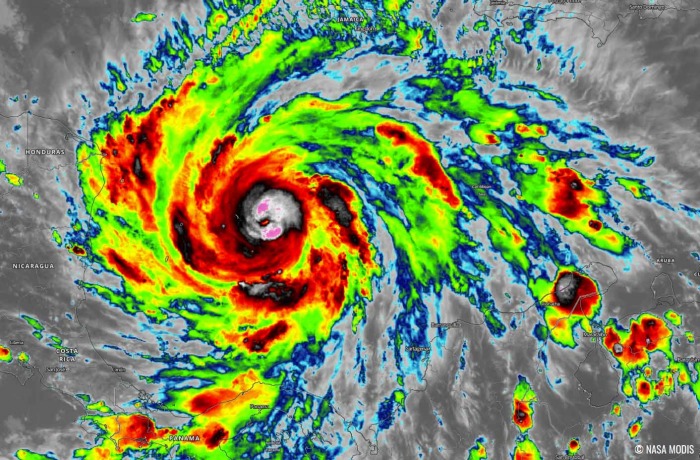 The satellite image above is provided by Windy.com.

The satellite presentation of hurricane Iota has continued to improve on Sunday afternoon. A ragged eye has become apparent in visible satellite imagery, with excellent banding features surrounding it.

The upper-level outflow ventilation is outstanding. Widely open in all directions, a sign that Iota is serious about rapid strengthening!

The Air Force Reserve Hurricane Hunter aircraft that is scanning Iota has reported a minimum pressure of around 964 mbar, and stronger winds across the northeast and northwest quadrants. Rapid deepening of the pressure is seen as its central pressure has been falling for about 3-5 mbar with each hurricane hunters pass.

But Iota has continued explosively intensifying further on Sunday.

Based on the Advanced Dvorak Technique (ADT) analysis estimation Iota’s tropical-storm-force 50-knot winds are spread across the 50-60 mile radii around the eye. While hurricane Iota also has around 20-25 radii of hurricane-force 64-knot winds. The wind field is also expanding and strengthening. 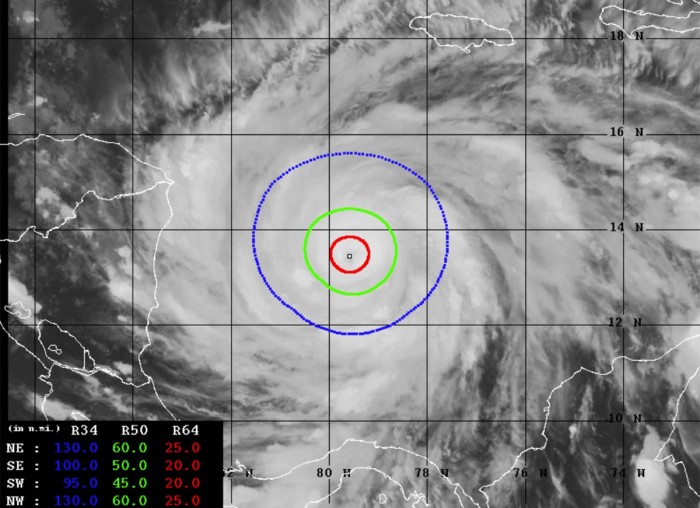 Hurricane Iota has been steadily intensifying since Saturday afternoon but is now using a higher gear. The rapid intensification is even stronger now as Iota arrived in much more favorable conditions. Extremely warm seas lead to explosive storms that Iota began rapidly deepening its central pressure. 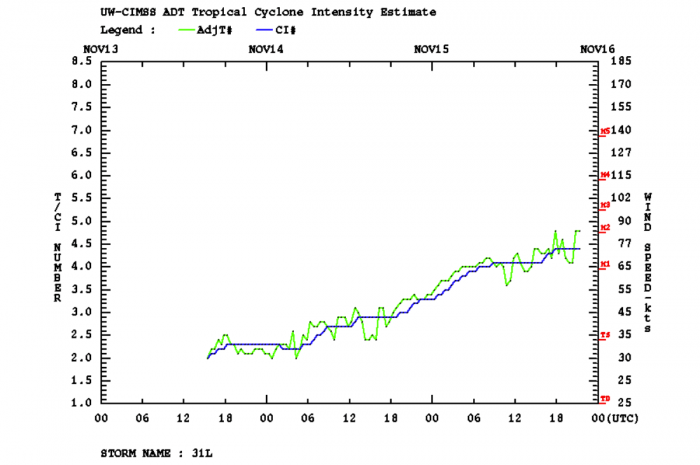 Iota is a Category 2 hurricane with around 85-90 knots of sustained winds and is likely to become a very violent hurricane over the next 24 hours!

Very favorable atmospheric and oceanic conditions consisting of low vertical wind shear and warm waters are expected to lead to further rapid strengthening over the next 12 to 36 hours until the center reaches the coast of Central America. 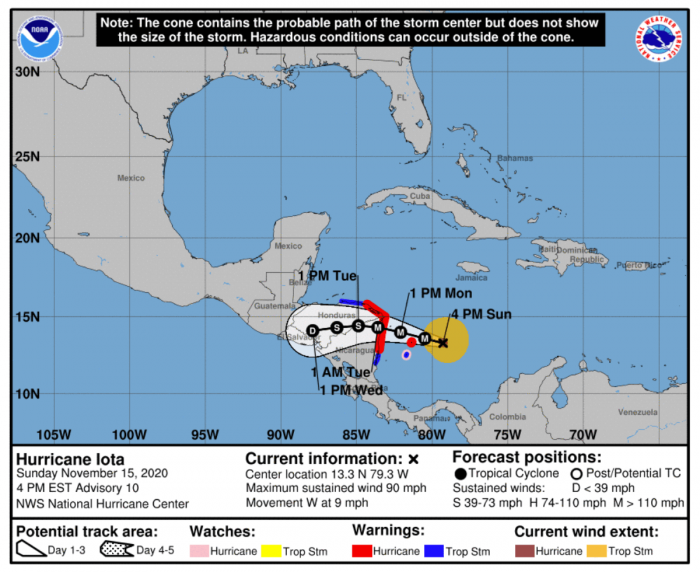 This is a great concern as catastrophic flooding is likely to be expected with storms maintaining for a longer period over the affected areas. As after it makes landfall in Central America, torrential rains and flooding will be a major threat from Iota.

The potential landfall impact will again be near the city of Puerto Cabezas (a city with a population near 60.000) in northeastern Nicaragua, the eye will likely pass to its north. Winds will be violent and could cause additional significant damage that was left after hurricane Eta. 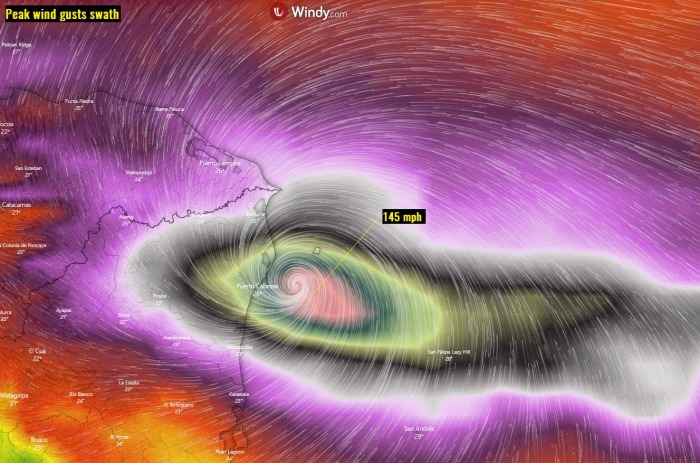 In addition to potentially catastrophic winds, Iota is expected to bring a life-threatening storm surge and extreme rainfall impacts to portions of Central America. This comes less than two weeks after another hurricane – a major Hurricane Eta significantly impacted the area.

And this will significantly worsen the ongoing flooding disaster in the Central American region.

Hurricane preparedness should be underway in Nicaragua, Honduras, and Guatemala now as a major disaster is likely to occur. The European model, ECMWF, is simulating an extremely concerning amount of rainfall over the next 10 days.

There is a high potential for another 400-700 mm (15-25 inches) of rain possible in many areas. While the land is already completely soaked after hurricane Eta’s destructive and deadly impact last week. 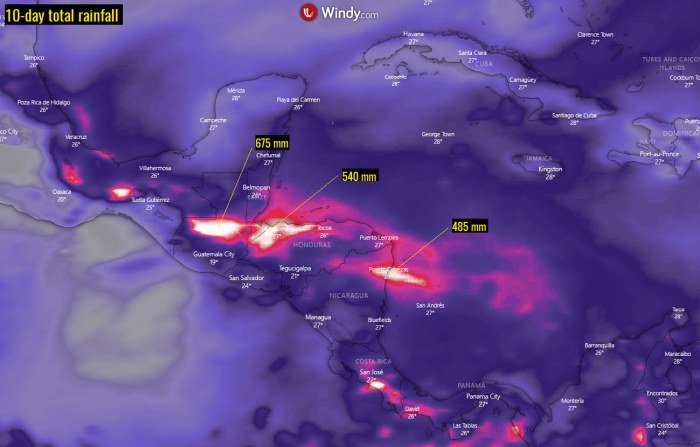 Rainfall accumulation. Image by Windy.com
Extreme amounts of rain are expected near the Iota’s landfall point in northeast Nicaragua. There also further west across northwestern Honduras, and central Guatemala. All these areas could see 400+ mm until the next weekend.

Life-threatening flooding, river flooding, and mudslides are expected. The impact will be significant and could be deadly!

After landfall, rapid weakening should occur as Iota moves over the mountainous terrain of Central America.

Remember that the average hurricane season generates ACE between 66 and 111! Remarkable!

What is the Accumulated Cyclone Energy (ACE index)?

The Accumulated Cyclone Energy is the energy output of a hurricane season, calculated as an index (ACE index). It is a metric used to express the energy used by a tropical cyclone during its lifetime. The index calculation takes the cyclone’s maximum sustained winds every six hours and multiplies it by itself to generate the values. The total sum of these values is calculated to get the total for a storm.

The current Atlantic basin ACE is, as of November 15th, already at 170. That is an impressive 68 percent higher than during a normal season to this date (101.3).

But indeed Iota’s ACE value is not final yet as it will be adding more with its major hurricane strength until the landfall in Central America.

With the Accumulated Cyclone Energy (ACE) index above the ‘extremely active’ threshold of 152.5, this means that the 2020 Atlantic hurricane season is now officially an extremely active season.

Theta, therefore, is the ninth (9th) named storm from the Greek alphabet list. So we are now well above the previous record of 6 named storms from this list, set in 2005. 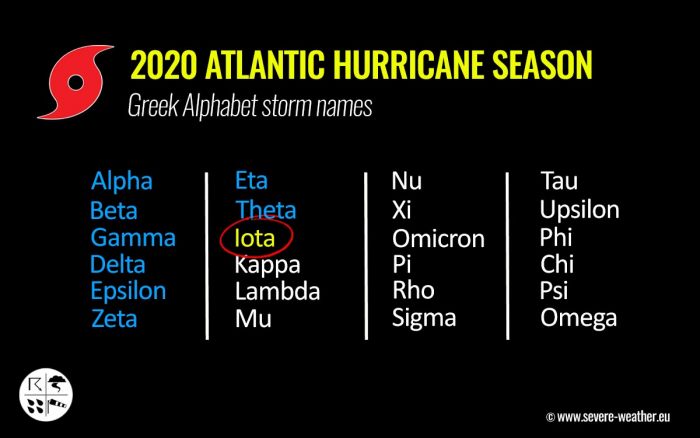 The 2020 Atlantic hurricane season remains on course for an even more exceptionally record-setting year to date, Nov 15th.

There were 30 named storms, which is about 261 % of the long-term average (11.5) for this time period. So far, there were more than double the number of hurricanes (13) and five (5) major hurricanes (Laura, Teddy, Delta, Zeta, and Eta). Iota is soon the 6th major hurricane of the season.

28 storms out of those 30 total, had the earliest formation date on record. 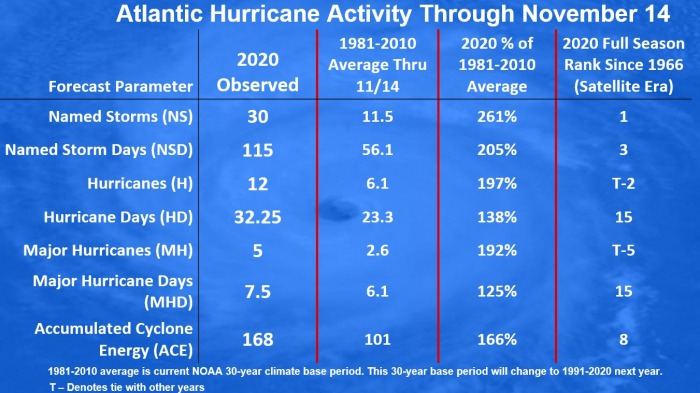 As of Nov 15th, there have been 116 named storm days so far, which is around 206 % of the average number (56.2). As we can see from the statistical graphics above (see the column 2nd from the right), all the forecast parameters are greatly much above average. 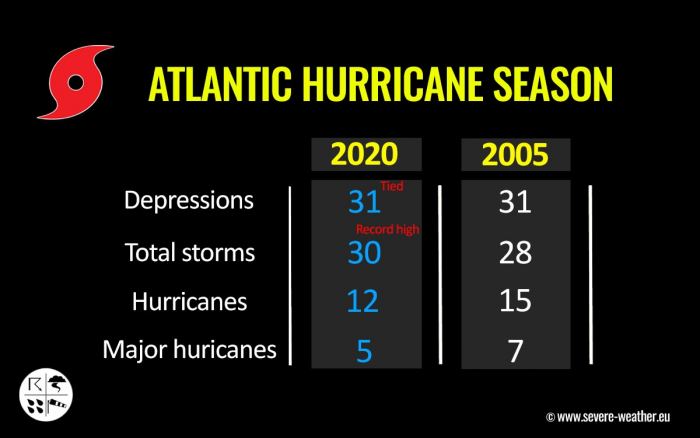 With a still high potential for a few more tropical depressions or storms forming through November, we might be reaching halfway through the Greek Alphabet names. The potential remains high that additional storms could form in the next two weeks.

KAPPA COULD FORM NEXT WEEK?

Global models are definitely trending this way and also the National Hurricane Center (NHC) hints another tropical wave could be another tropical depression or a tropical storm late this week. The next named storm would get a name Kappa. 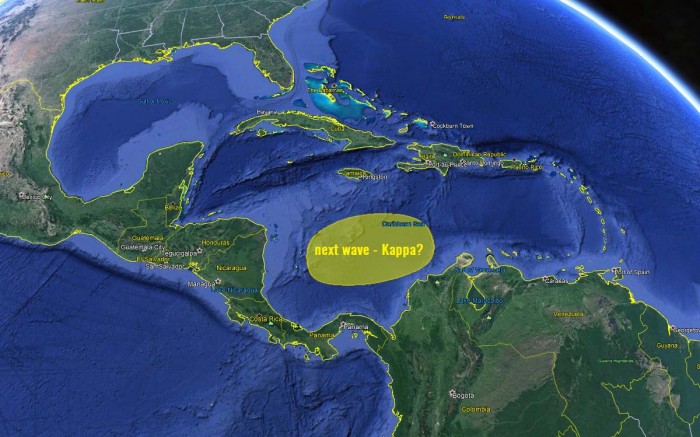 The NHC is giving this wave an 20 percent (%) chance to become a tropical storm over the next 5 days.

There seems to be a fairly high chance that the well-above-average western Atlantic and Caribbean region sea temperatures would be favorable for tropical storm formation even in December this year. And season might be aiming towards Nu or Xi storm names at the end.