The Gulf of Mexico will soon become active as new Tropical storm Michael has developed in the western Caribbean, east of the Yucatan peninsula, Mexico. Potential is increasing for a strong hurricane to develop in the coming days while the system will be moving across the Gulf. Landfall is currently expected in Florida on late Wednesday night.

Latest satellite imagery indicates an organizing tropical storm in the western Caribbean, centered just SW of Cuba. A lot of very deep convection is visible around the centre of the low, pressure is near 985 mbar .

[#TweetForScientists] Sunrise 1-min visible imagery of #Michael shows the primary convective band attempting to wrap upshear. Given continued shear & resulting occasional dry entrainment, there may be hiccups in the inner core's formation, but this evolution is impressive so far. pic.twitter.com/bWptCt29W7

Water vapour satellite image of a strengthening Tropical storm #Michael in the western Caribbean today. Michael is expected to become hurricane while crossing the Gulf of Mexico this week – stay tuned for updates! Animation via @TropicalTidbits pic.twitter.com/Grbra7zFrf

HWRF and ECMWF model guidance, based on today’s 00 UTC run – in good agreement with GFS, pushing Michael towards landfall in Florida on late Wednesday. 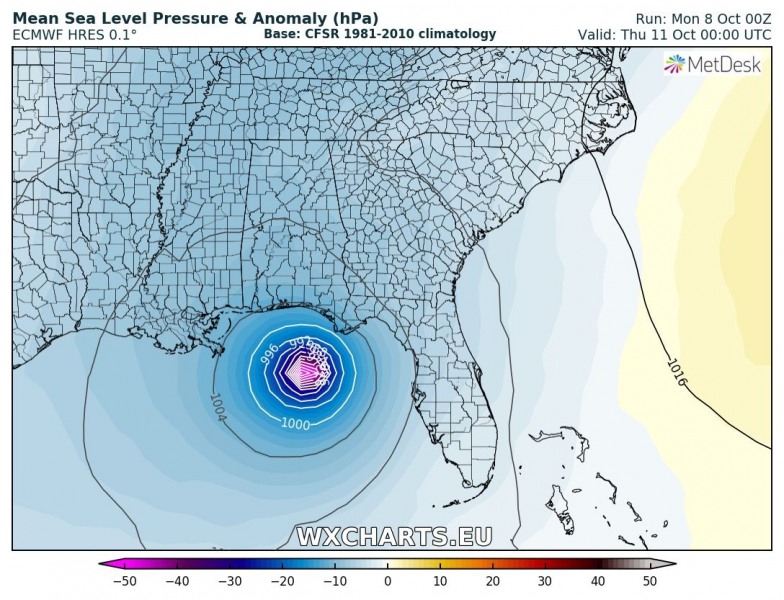 Model intensity guidance suggest it should strengthen to Hurricane strength (CAT 1 / 2) in the next 24-36 hours, soon after it crosses the channel between Yukatan peninsula and Cuba.

The forecast track by most of the models suggest Michael will be making landfall on Florida peninsula, then cross the southeast US, accelerate towards the east US coast and eject over the Atlantic ocean during the weekend.

LAtest NAM model forecast for hurricane #Michael across the eastern Gulf of Mexico towards the landfall in Florida peninsula this week. This could be intense! Animation via @wxcharts pic.twitter.com/vcbHsW7JNz

Hurricane Michael is on track to become a threat for major storm surge, devastating winds and flooding across southeast United States. Michael could make a landfall as a Category 2 (or even 3) hurricane along the coast of Florida, sometime on late Wednesday or Thursday. We will continue monitoring the evolution of this tropical system through the next days when more data (including NOAA hurricane hunters data) becomes available.