Tornado season across the United States is ramping up. Just a week after a tornado outbreak struck across Mississippi and Alabama on St. Patrick’s Day, the severe weather potential is shaping up for potentially another outbreak of severe storms across the Dixie Alley region. Again, volatile environmental conditions will develop this Thursday with dangerous strong and long-track tornadoes possible Thursday night.

Although we have seen a quite slow start of the storm and tornado season this year, the activity is now ramping up with a progressive and dynamic pattern evolving across the southern portions of the country. That is just a week after a severe tornado outbreak that struck Mississippi and Alabama with nearly 60 tornadoes on St. Patrick’s Day. 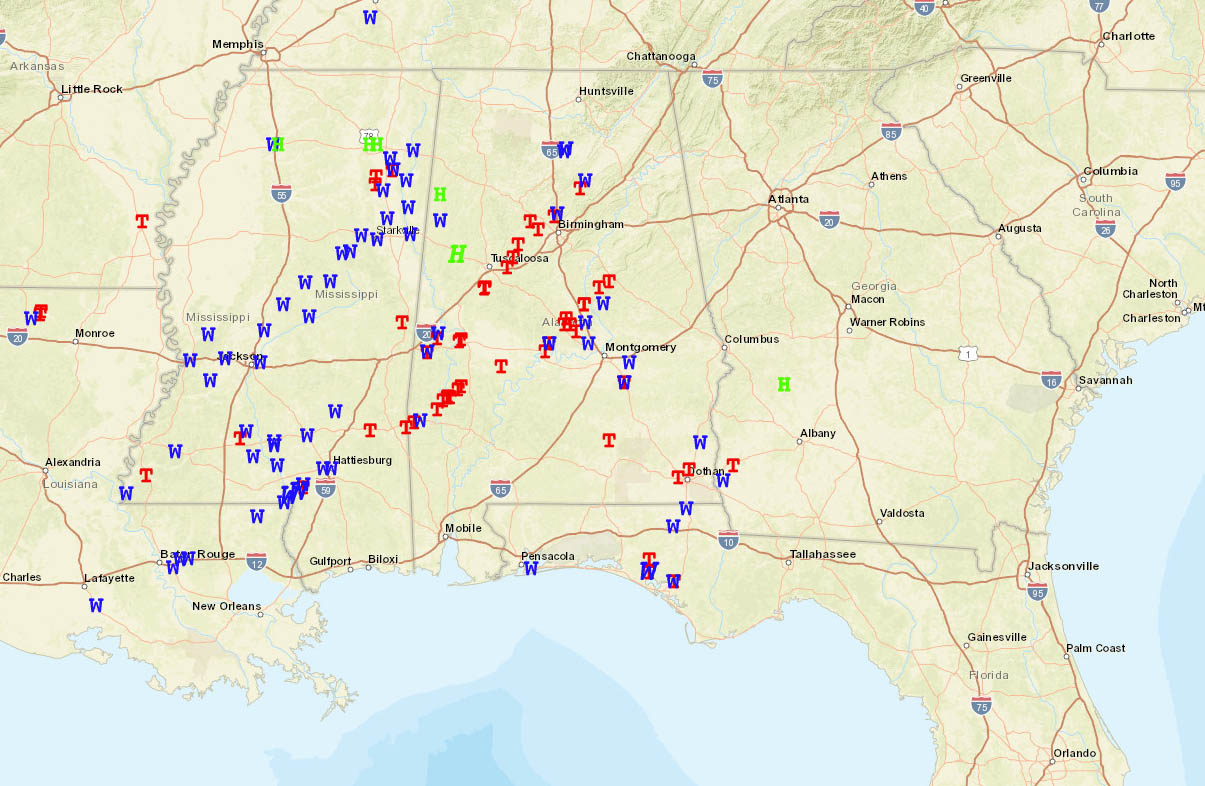 Thanks to cold outbreak events during the final months of January and February, the start of the tornado season was delayed with the lack of severe weather activity even across the South and the Southeast United States. But the numbers are now rapidly improving, 2021 tornado season is catching up with the long-term statistics quite fast. 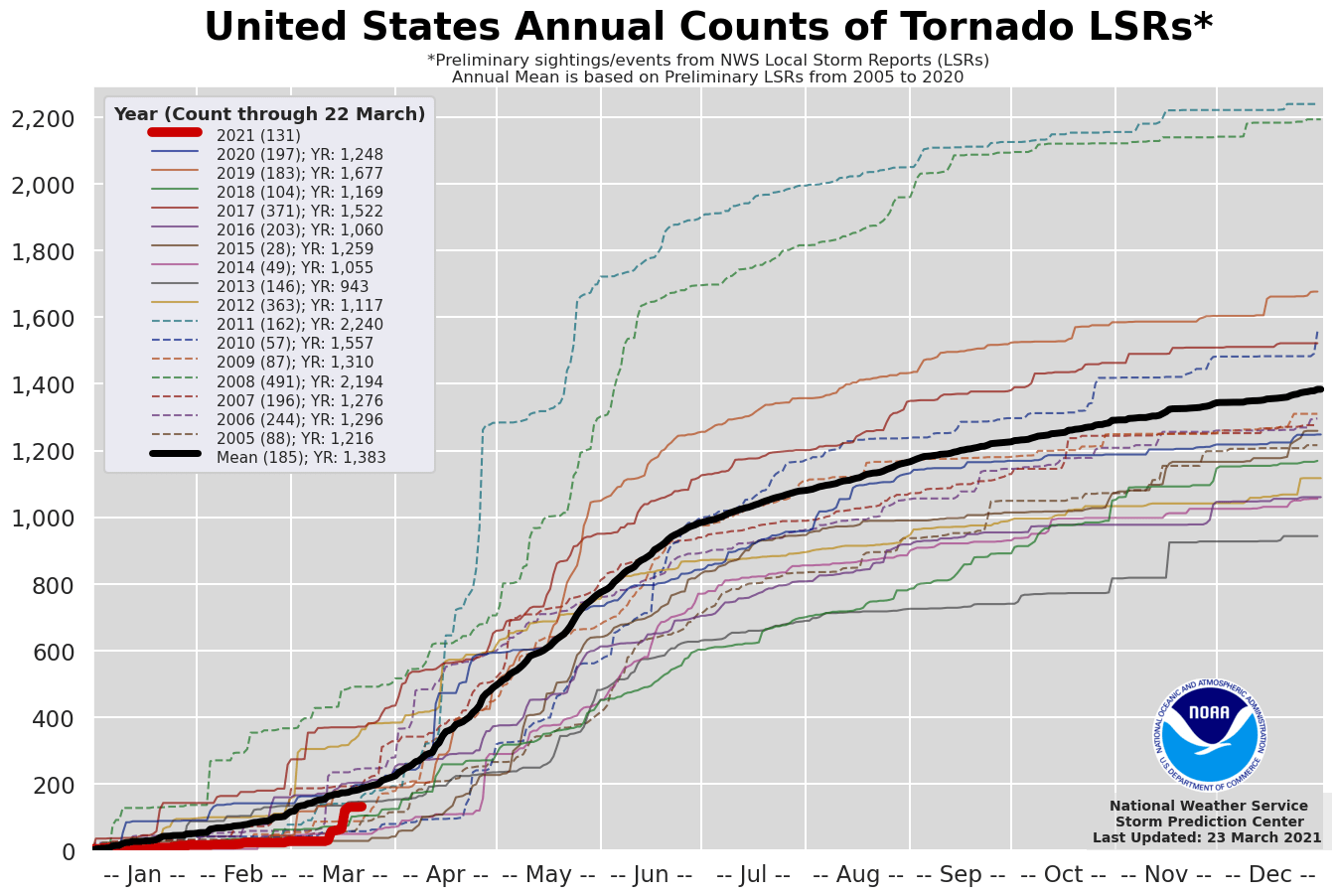 As we can see above, until March 22nd this year, there were 131 tornadoes reported across the United States. This is quite an improvement against the almost record low number of tornado reports by early March. The tornado outbreak on St. Patrick’s Day indeed helped the statistics, and other events as well. A preliminary 131 tornado reports so far are about 70 percent of a typical ~182 tornado reports from Jan 1st through late-March.

It seems that the activity is following the early trends as the above-normal activity was expected. This year, 2021, a colder than normal Pacific (known as La Nina) is expected to lead to increased severe weather events and above-average tornado events. More severe weather and tornadoes are quite likely. As it doesn’t take much effort to get numerous tornadoes when tornado outbreaks occur.

This week, we’re back with a significant threat it seems. The latest weather model guidance is confirming an increasing potential with a serious weather setup developing across a large region of the Southeast United States Thursday evening through Friday morning this week.

Odds are growing for another Tornado Outbreak potential to develop as a sharp frontal system rips into the Dixie Alley with Mississippi and Alabama in the prime zone. Let’s get into more details below.

ANOTHER TORNADO OUTBREAK FOR MISSISSIPPI AND ALABAMA

It didn’t take long, the ongoing progressive pattern with dynamic weather systems has risen the potential for yet another dangerous severe weather and potentially also a dangerous tornado outbreak this week. The last deep system brought almost 60 tornadoes last week, now the same areas are again in the prime zone for more significant and life-threatening severe weather. Strong tornadoes could occur as well. 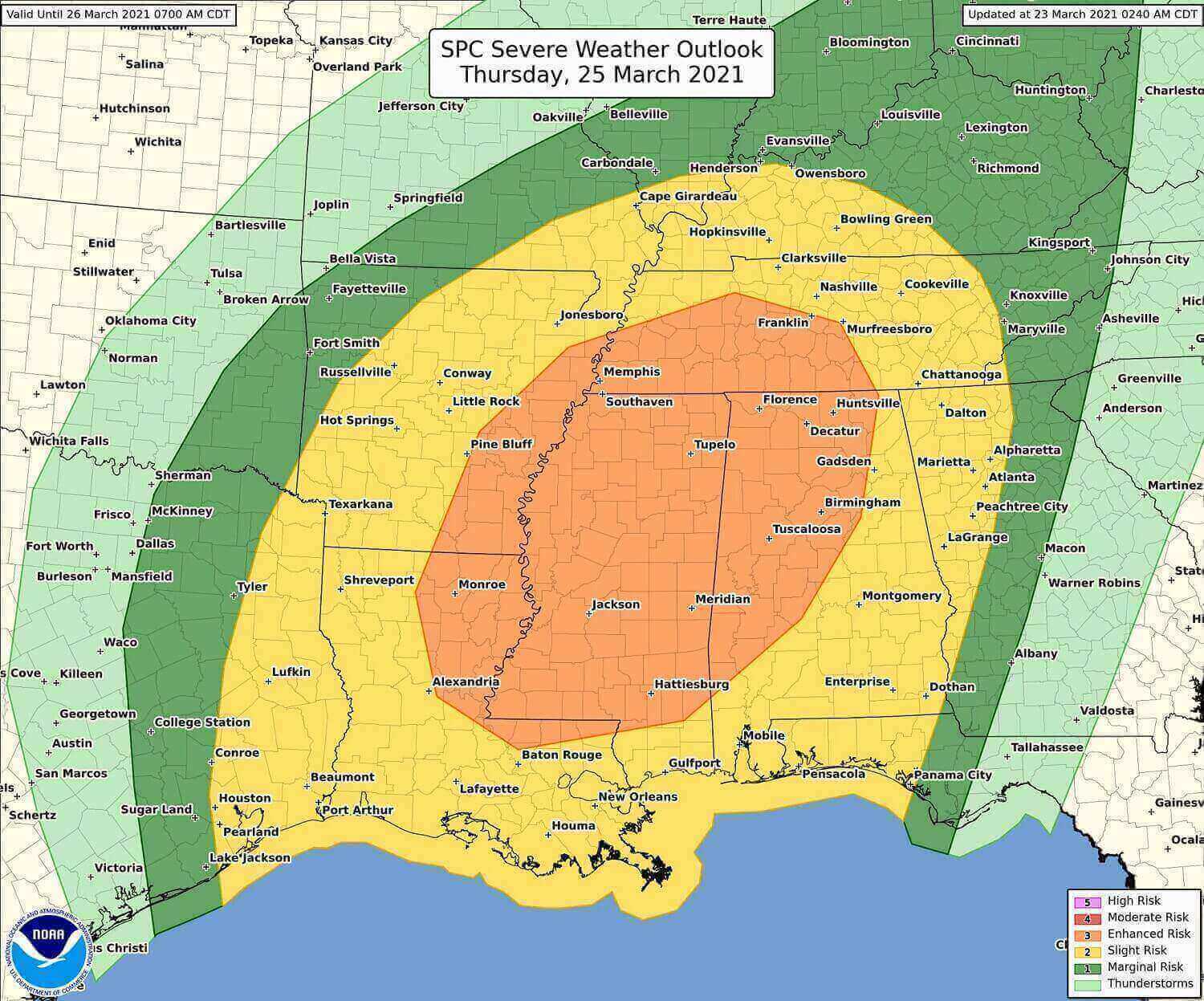 A robust upper-level shortwave trough will move from southern Texas early Thursday northeast through the lower Mississippi Valley during the day and reach the Ohio Valley overnight to Friday. The associated cold front will extend from the Great Lakes southwest to a weak surface low in eastern TX, then south into the western Gulf. 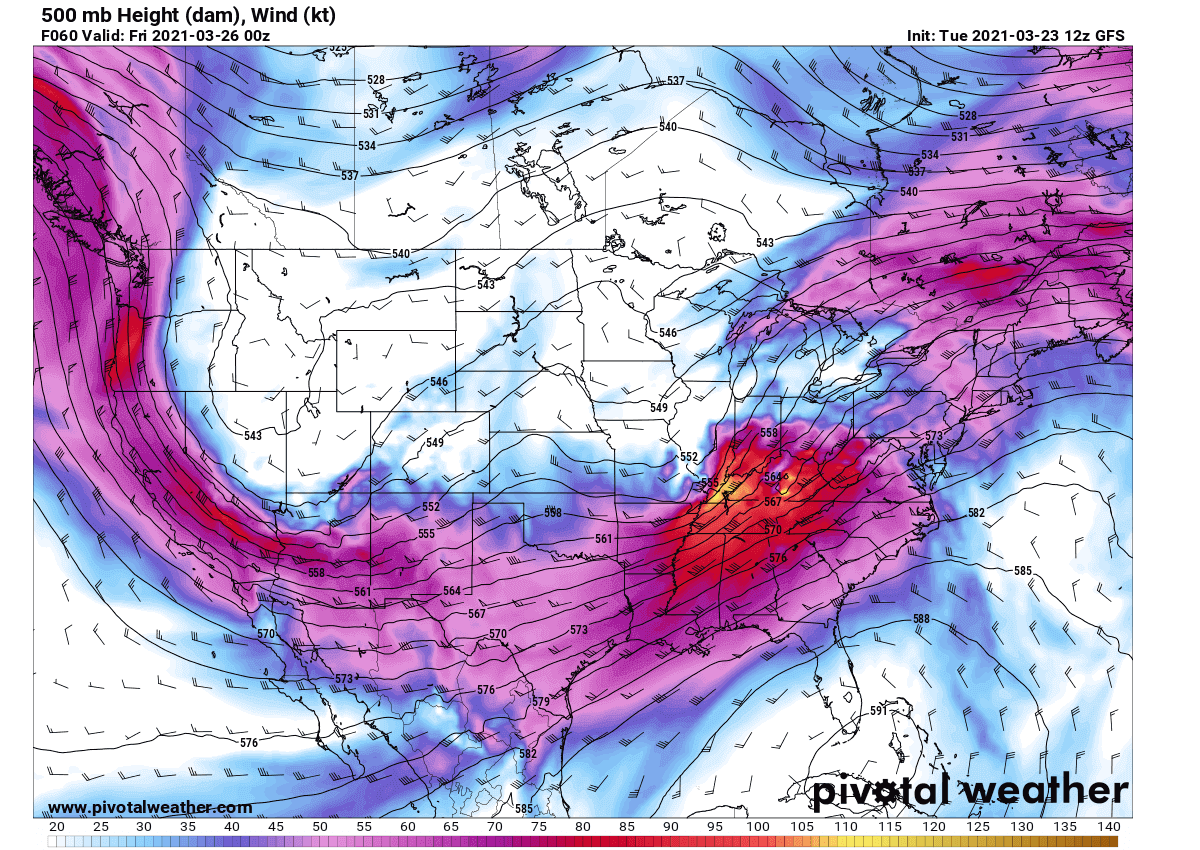 The upper wave will be gaining strength while traveling further northeast on Thursday morning. A quite deep core of the wave hints at a serious threat once the frontal system taps into the very warm/moist air mass returning into the Southeast South, the Dixie Alley. Severe storms will intensify and expand in coverage as the day advances.

As with the last system, the reason for an enhanced chance for a tornado outbreak is the very strong jet stream aloft. Strong upper-level winds are rounding the core of the upper low, providing a very favorable source of a lifting mechanism for storms to develop.

As the upper trough ejects further northeast, the surface cyclone is forecast to undergo a quite significant deepening as it develops northeast across the Mississippi Valley towards the Tennessee Valley during the day. This will accelerate the sharp cold front towards the Southeast States.

Ahead of the front, a warm front lifts northwards extended from northeast Texas into northern Louisiana and central Mississippi from the morning, and reach the Tennessee border by the evening hours. With time, the low-level winds (attached below are 925 mbar winds) will significantly increase. 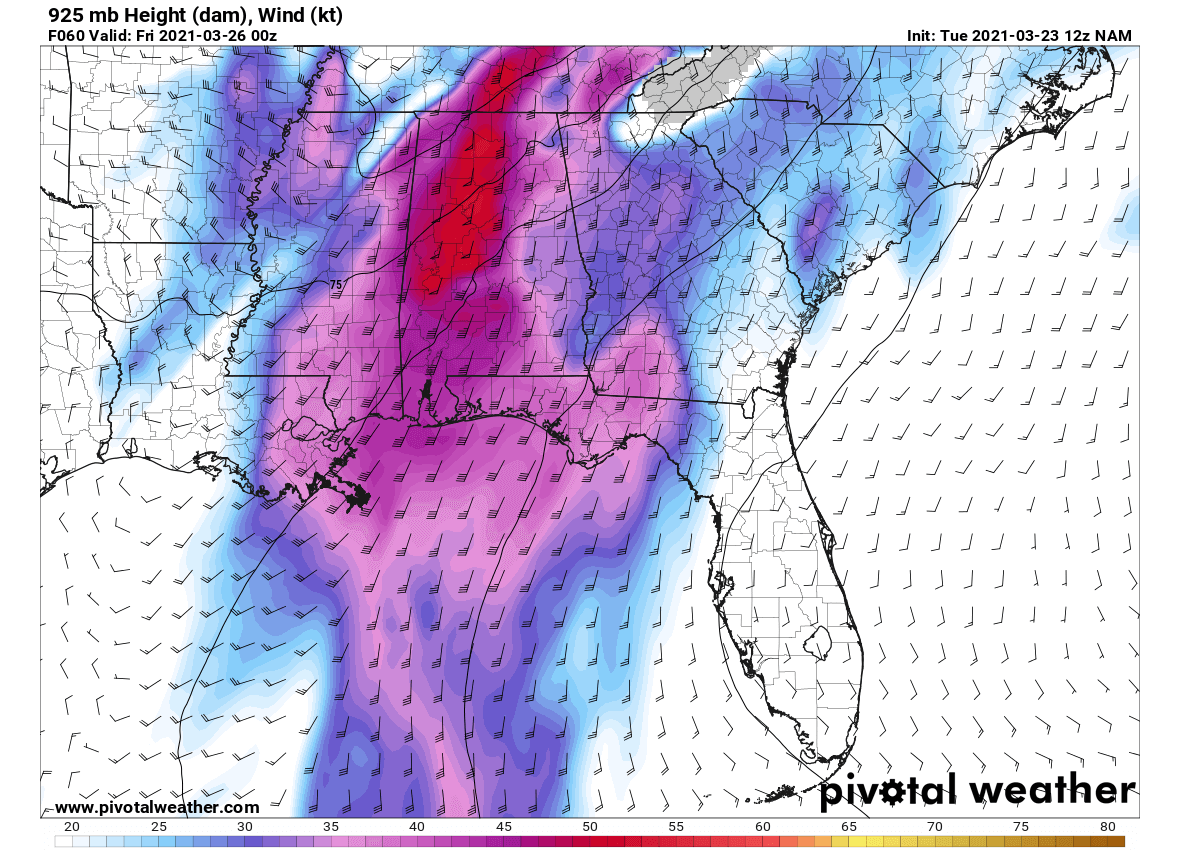 Initially, it is likely that elevated thunderstorms will be ongoing in the warm advection regime across northern Mississippi, Alabama, and Tennessee on Thursday. This activity is expected to continue lifting northward allowing for destabilization from the south during the mid-day.

Very moist and warm air mass from the Gulf of Mexico will introduce rich low-level moisture with the upper 60s to near 70 F dewpoints, advecting northward through the warm sector. It will contribute to moderate instability with up to 2000 J/kg of MLCAPE (mixed-layer CAPE). 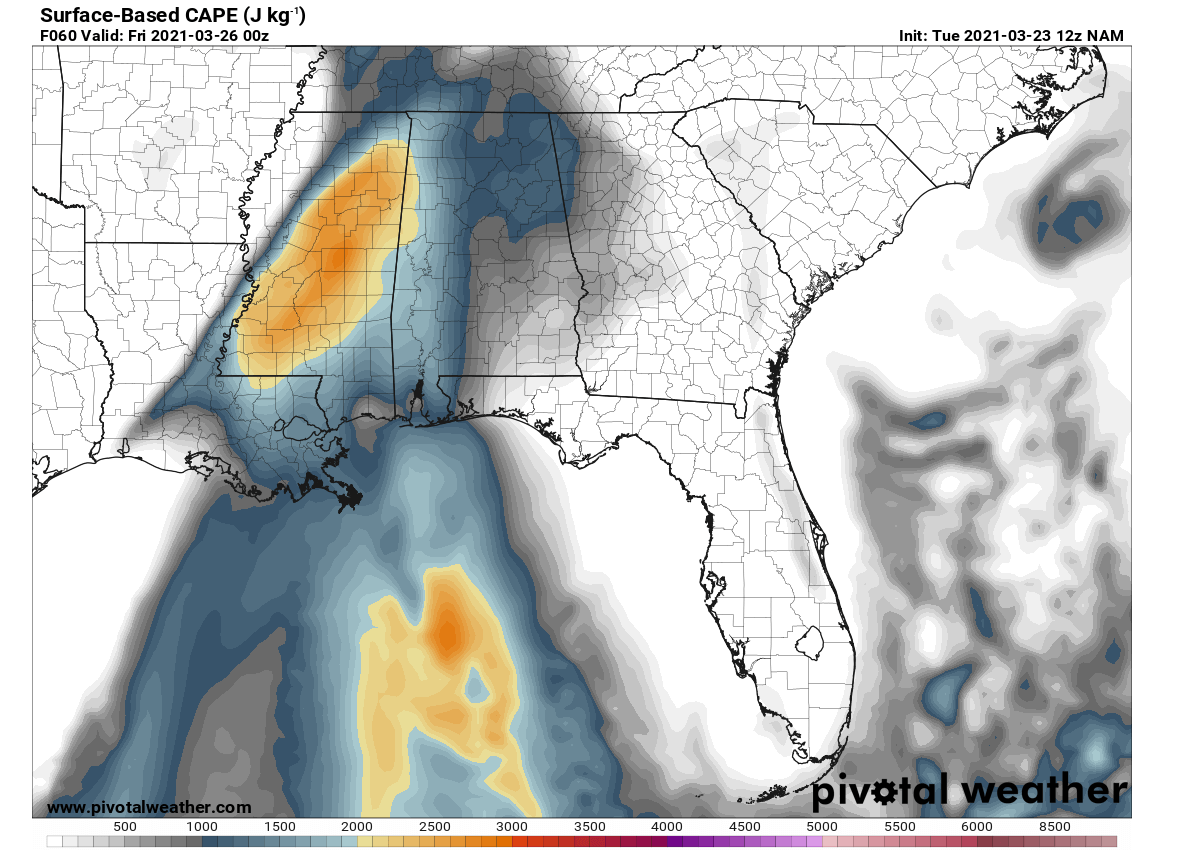 Thus, the potential will exist for discrete storms to develop in the warm sector as the boundary layer destabilizes with strong heating during the afternoon.

The vertical wind profiles hint at a very strong shear and large 0-1 km hodographs which easily support supercells capable of producing a tornado, including strong tornadoes and large hail. These conditions are now bringing another great concern that could lead to a dangerous tornado outbreak across part of Mississippi, Alabama, Tennesee, and surroundings this Thursday.

Attached below is the Significant Tornado Parameter (STP) – a composite product of bulk shear, storm-relative helicity, and surface-based CAPE (instability). It hints at a *very* impressive concerning signal that means very high potential for strong tornadoes as well. 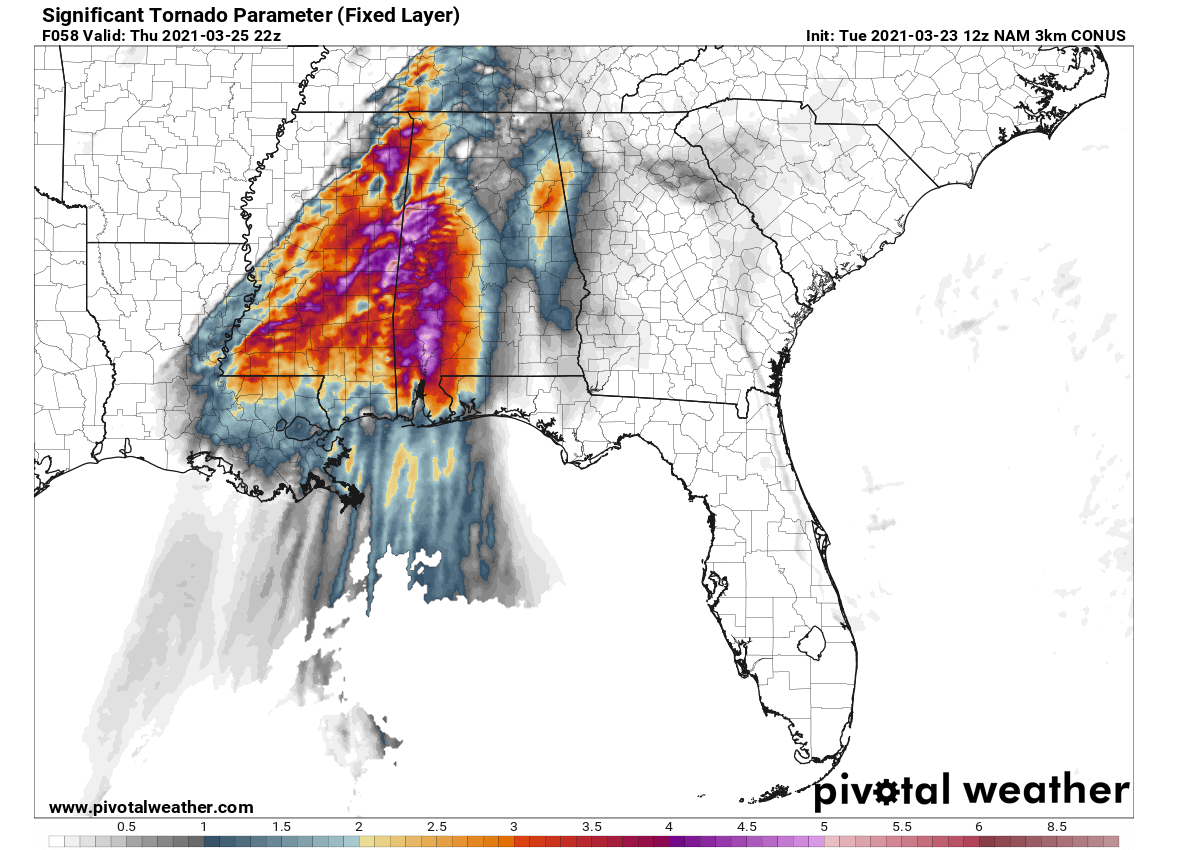 Note: The STP values greater than 1 are often indicative of the increased potential of significant tornadoes.

The storm activity will spread northeast through the lower Mississippi Valley during the day and into the Tennessee Valley by late afternoon and the evening hours.

Attached below is the sounding (Skew-T) diagram for east-northeast Alabama with very strong shear with nearly 70 knots within the 0-6 km layer. And the surface-based instability (SBCAPE) of around 2700 J/kg. These conditions are strongly supportive of violent tornadoes. As we can see, the automatic ‘Possible Hazardous Type’ of the event hints at the “PDS Tornado” – that is Particularly Dangerous Situation Tornado potential. 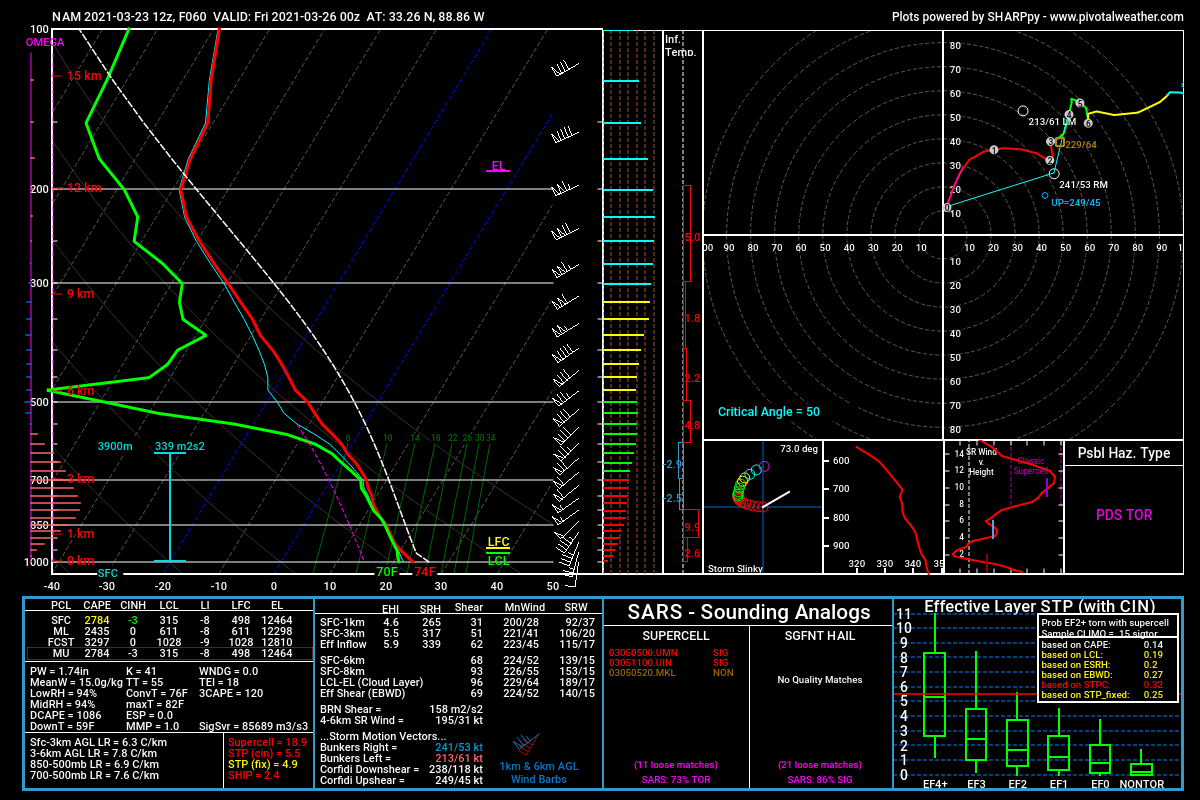 Additional storms may also develop along the cold front with linear structures capable of damaging wind.

As we could see from the past few weeks, the warming arriving with the month of March has never been an issue for the moist air coming from the Gulf to become strongly unstable. If it combines with a robust frontal system, severe weather outbreaks are possible.

If we keep in mind that La Nina (the cooler tropical Pacific ocean waters) typically boosts the severe weather activity, it seems that more severe weather is coming up ahead for this tornado season. It is not that simple, of course, but we are likely bumping into a very tornado-active spring this year. Thanks to the ongoing La Nina circulation.

The overall jet stream pattern is forecast to also continue and extend into at least the first half of May, so the tornado season will keep producing more severe thunderstorms and also keep storm chasers busy this year. 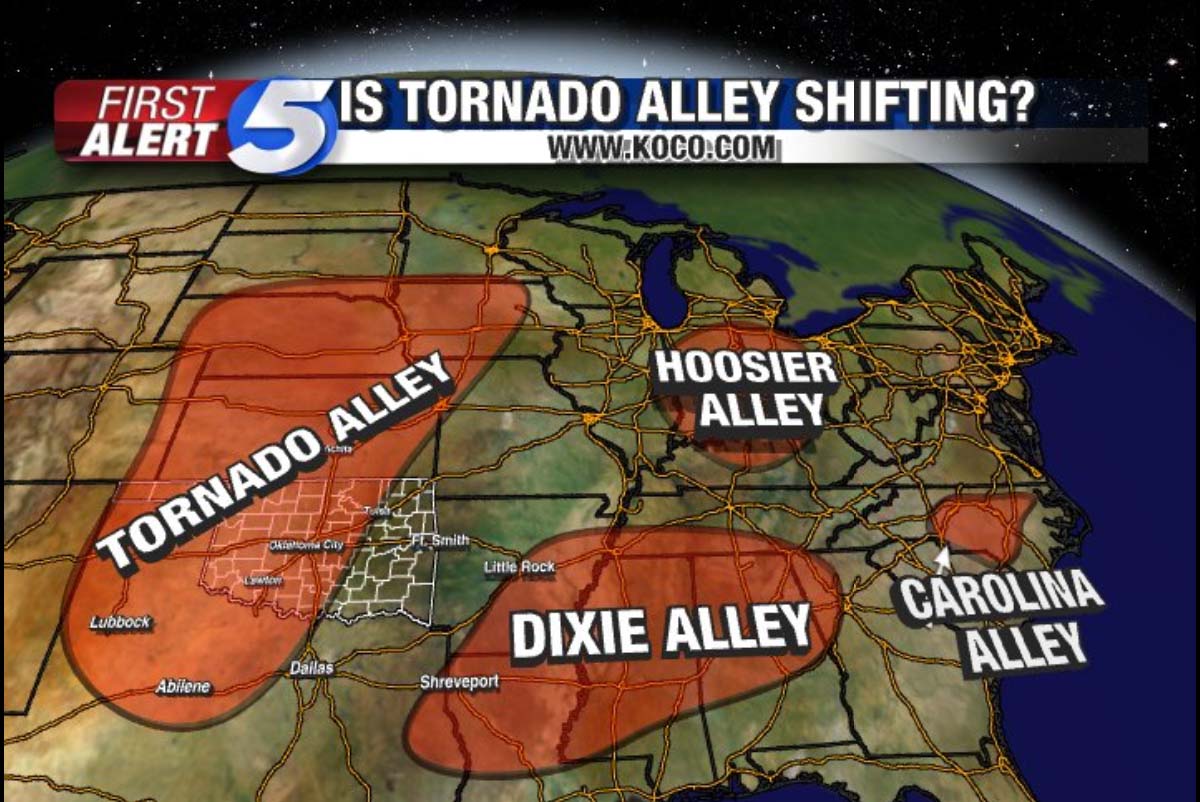 Recent studies and the existing long-range model trends have found that the main activity this upcoming tornado season might be well off to the east of the traditional Tornado Alley – the area known with an annual high frequency of severe weather hazards and tornadoes, covering the southern and central United States into the Midwest.

What studies found is that the main activity in the years like 2021 (La Nina year) might well be shifted into the low-mid Mississippi Valley and the central Gulf Coast. So well east of the Tornado Alley typical chaser-friendly and also less populated areas across the Great Plains.

But, of course, even if the higher frequency shifts further east, it doesn’t mean the traditional Tornado Alley will not see tornadoes. But it might keep the numbers below average at the end.

***The images used in this article were provided by PivotalWeather and NOAA.