After weeks of a strong earthquake swarm, the Iceland volcano Fagradalsfjall eruption is underway this Friday evening, spewing molten lava into skies as a red glow has been seen for miles away. The crack is about 500 m long. The eruption was first seen on a web camera close to the mountain and has also been confirmed on thermal satellite imagery.

At around 21:15 UTC today, March 19th, 2021 a volcanic eruption began at the Geldingadalur, close to Fagradalsfjall on the Reykjanes Peninsula, Iceland. The eruption site is in the valley, about 4.7 km inland from the southern coast of the peninsula.

UPDATE at 02 UTC: The eruption is considered small at this stage and the eruptive fissure is app. 500 m long. The magma area is app. 1km2. Lava fountains are small.

Due to the eruption, all air traffic at the main Keflavik International Airport in Iceland has been grounded. The Icelandic Met Office meteorologists have confirmed that an eruption had started on the Reykjanes Peninsula in Fagradalsfjall after weeks of significant earthquake swarm with tens of thousands of tremors.

All roads around the mountain have been closed. Local residents have been warned to stay away from following a volcanic eruption tonight. They are said to be on standby in case the eruption increases and they have to evacuate. The local police have called on people to stay away.

The Icelandic Meteorological Office (IMO) has also noted that the volcanic gas pollution is expected to extend as far as Þorlákshöfn and to continue tonight. People are asked close windows and stay indoors.

The eruption os located within 2.6 kilometers (1.6 miles) of Suðurstrandarvegur, a road that runs along the peninsula’s southern coast. The nearest town, Grindavík, is about 10 km away from the southern end of the southwest of the eruption site and lava tongue.

The satellite and Coastal Guard imagery reveals a crack of the estimated length of about 500 meters, with slow-flowing lava. The distant red glow is spectacular in Iceland, with molten lava causing spectacular red skies visible for miles. 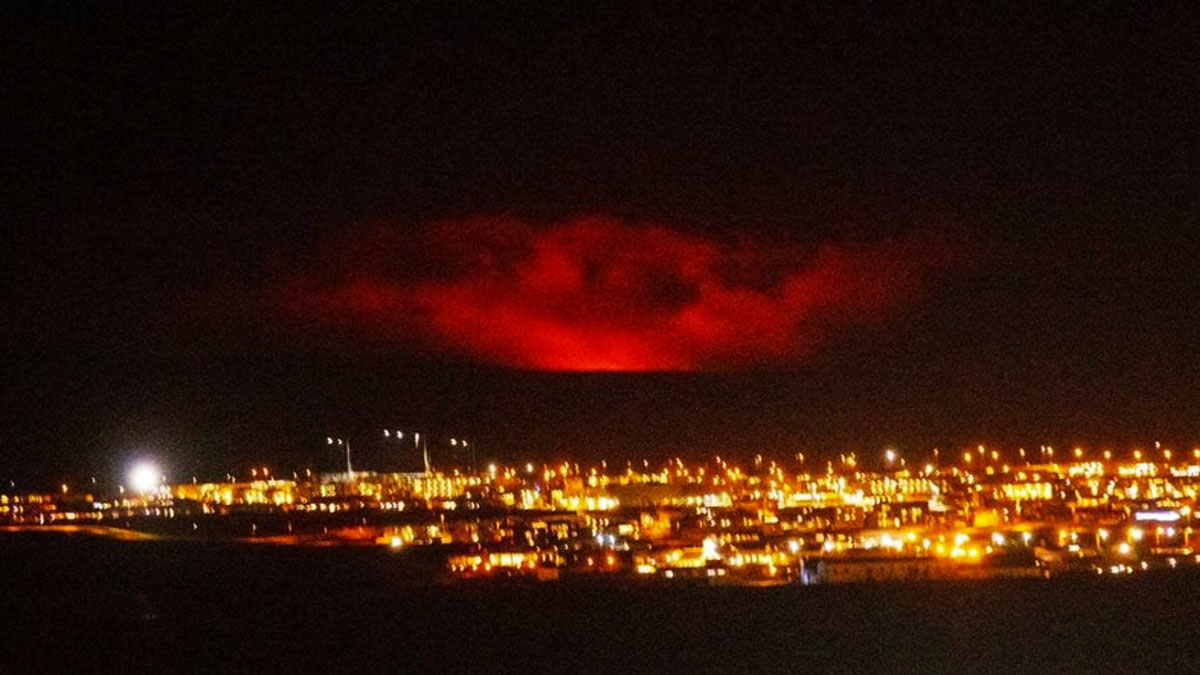 The volcano itself, on Fagradalsfjall mountain, is a seismic hotspot, where more than 40.000 earthquakes have occurred since February 24. That is more than in the whole year 2020.

Here is the first image of the eruption, taken from the Icelandic Coast Guard helicopter, with a visible fissure of about 500 m long. Right now, there are no reports of ash fall. But the tephra and gas emissions are likely to be expected through Saturday or this weekend. 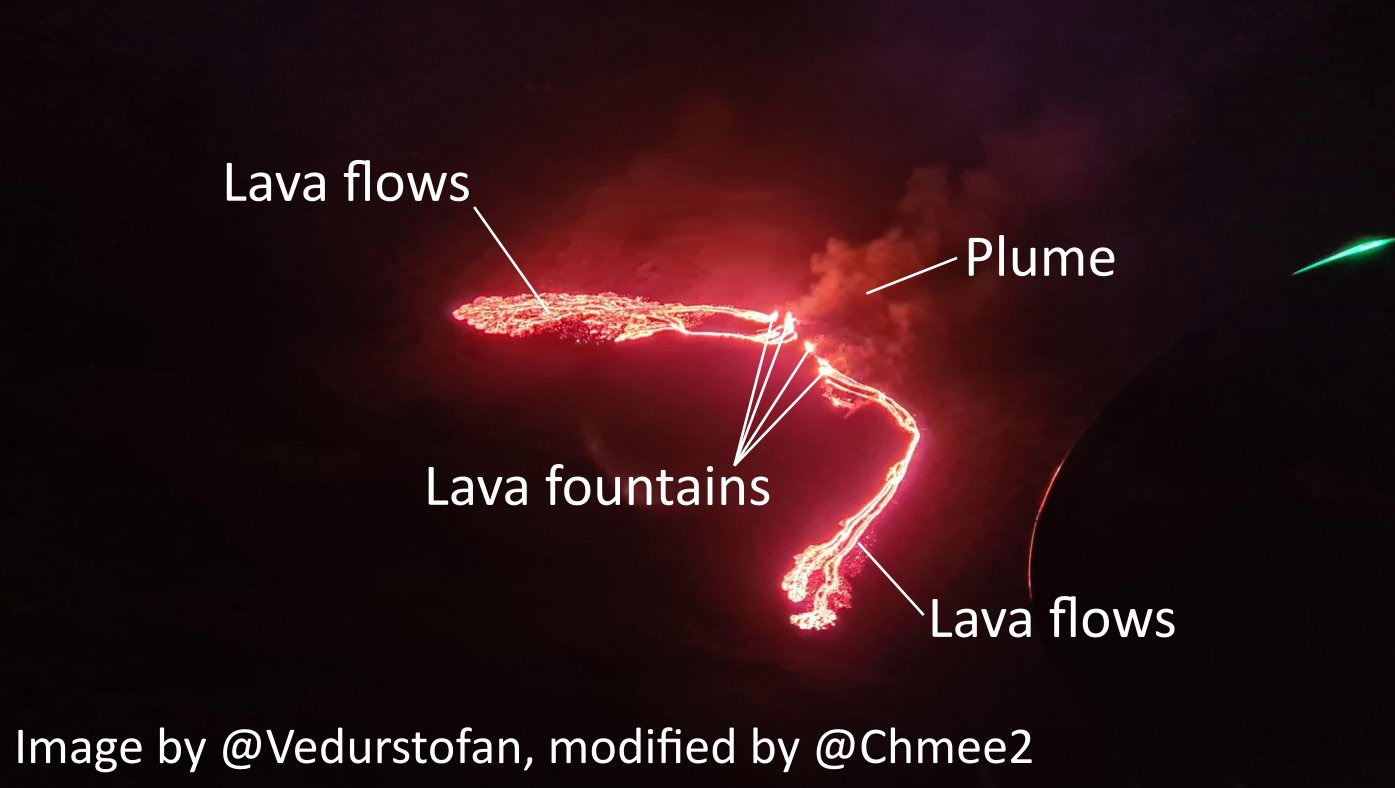 These volcanic eruptions in the region are known as effusive eruptions, where lava flows steadily from the ground. So a different eruption than Etna volcano lately with an explosive manner spewing ash clouds high into the sky.

The main source of the past weeks’ earthquake swarm is a large body of molten rock, known as magma. It’s moving just about one kilometer beneath the peninsula surface and trying to push its way to the surface.

According to the Icelandic Meteorological Office (IMO), expert and volcanic hazards coordinator Sara Barsotti, they have never seen so much seismic activity, as some of those earthquakes were up to magnitudes of 5.7.

The earthquake activity in the region of the magma intrusion has been lower in recent days. And also presently, there is no intense seismicity occurring in the region. But earlier in the day, several low-frequency earthquakes were recorded below Fagradalsfjall. 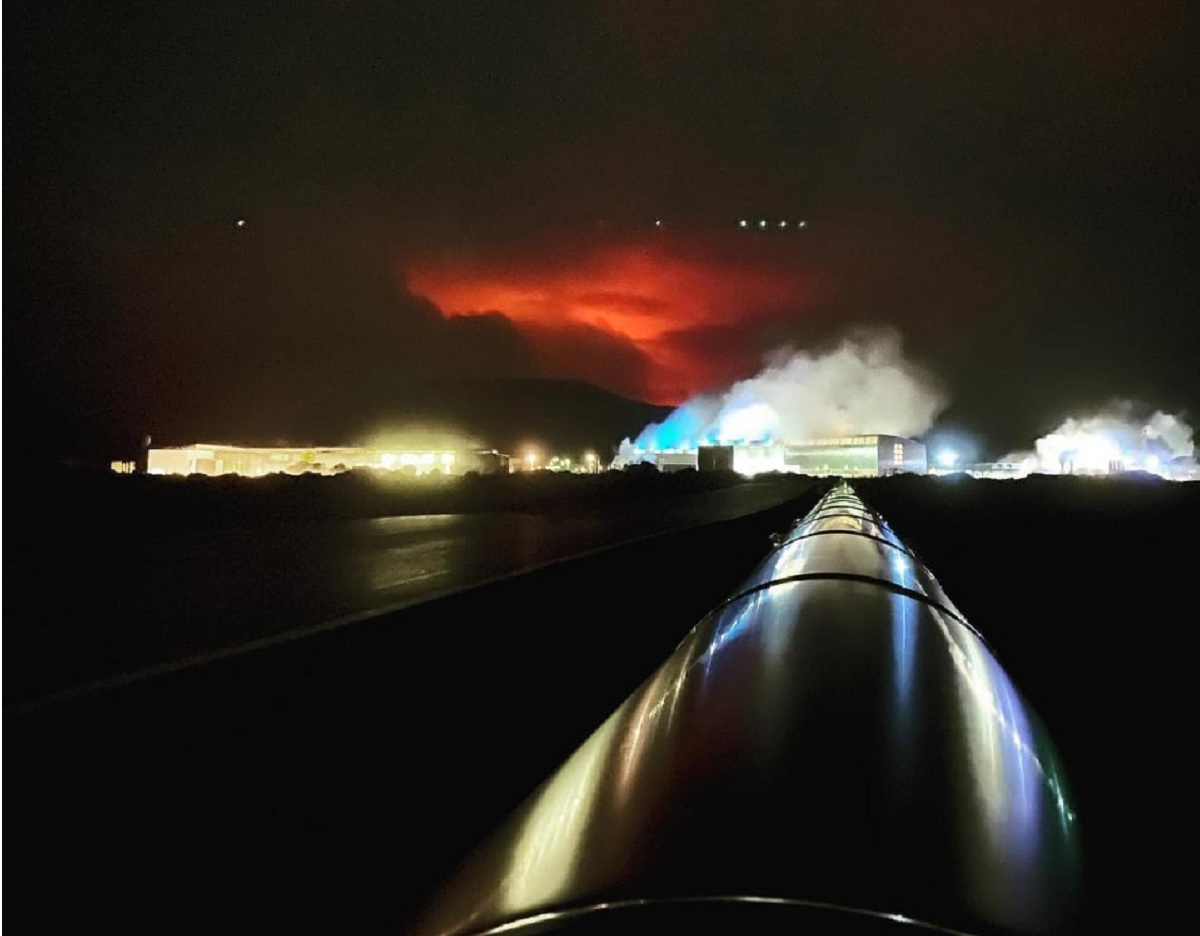 In the line with well-rehearsed contingency plans, the aviation color code for the Reykjanes Peninsula has been elevated to red, signifying an eruption in progress. Additional domestic restrictions have been put in place, including the closure of Reykjanesbraut – the main road from the capital region to Reykjanesbær and the international airport at Keflavík.

Experts are expecting lava to erupt from fissures in the ground, possibly resulting in spectacular lava fountains, which could extend 20 to 100 meters in the air.

This is also the first time that the Reykjanes volcanic region has erupted in almost 800 years.

*** Images and photographs/videos are copyrighted by RUVfrettir, Gisli Olafsson and Vedur.