Widespread severe storms including supercells with torrential/excessive rainfall, severe winds, tornadoes, and large hail are expected across the Mediterranean, Italy, and western Balkan peninsula on Friday. High rainfall sums are likely along with the Dynaric mountain range and the southern Apennines and lead to flash floods. 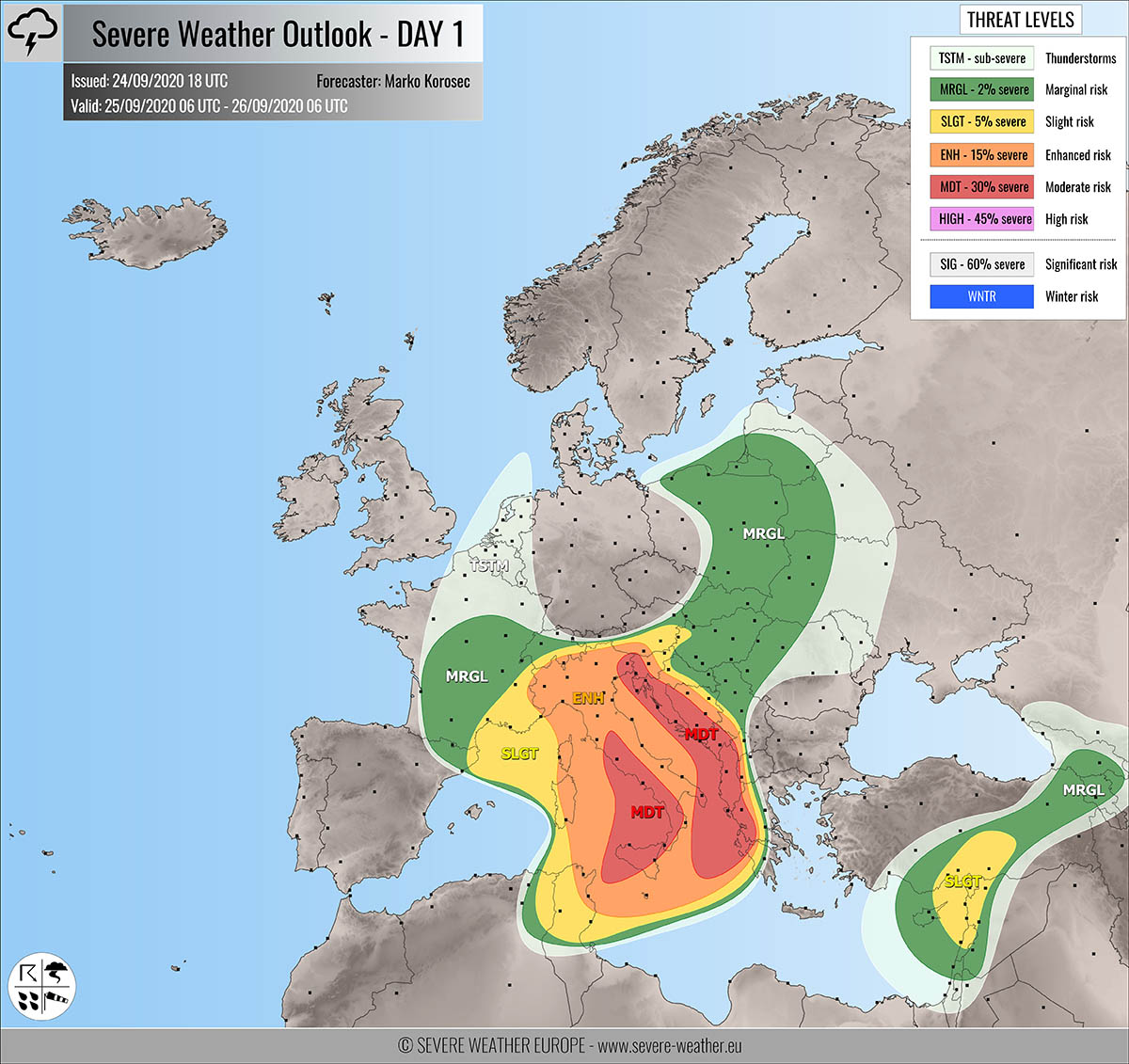 A very deep long-wave upper trough is moving across central Europe and the northern Mediterranean, gradually transforming into an intense and large upper low. Strong upper ridges are maintained over the North Atlantic and northwestern Russia. Short-wave pushes into the Middle East.

MDT risk has been issued for northeast Italy, western Slovenia, western Croatia, western Bosnia, Montenegro, Albania, and western Greece with a threat for widespread severe storms. Those will be capable of producing torrential/excessive rainfall with flash floods, severe winds, large hail, and tornadoes.

MDT risk has been issued for the Tyrrhenian Sea and south-central Italy with a threat for severe storms with large hail, severe winds, tornadoes, and torrential/excessive rainfall.

Storms are expected to partly continue from the previous night (Friday morning) onwards over the western Balkan and north-central Italy and re-intensify/develop during the day.

Enhanced low-level shear and helicity should also introduce the tornadic environment along the eastern Tyrrhenian Sea coast, the eastern Adriatic, and the Ionian Sea. Tornadoes (strong waterspouts) could form and come ashore.

Intense rainfall will develop with any organized storm as impressive moisture is present over the Mediterranean, combined with unstable air mass. Torrential rainfall will lead to flash floods.

Rainfall sums could reach 100-200 mm, potentially even close to 250 mm across the MDT risk areas. A combination of both persistent strong orographic and convective rainfall. Training storms could produce an extreme amount of rain in a short time and locally lead to dangerous flooding.

ENH/SLGT risks have been issued for the areas surrounding the MDT risks across the north-central Mediterranean and western Balkan peninsula with a more isolated threat but a still severe threat for organized storms.

SLGT risk has been extended over the northwestern Mediterranean with a threat for non-convective severe downslope winds, gusting up to around 120 km/h locally.

Those will be capable of producing severe winds, marginal hail, and torrential/excessive rainfall.

Storms are expected to cluster into large systems (MCS) in the evening hours, spreading east-southeast overnight to Saturday across both MDT risk areas.

SLGT risk has been issued for southern Turkey into eastern Cyprus and northwestern Syria with isolated threat for severe storms, capable of producing severe winds, large hail, and torrential rainfall.

MRGL/TSTM risks have been issued for parts of eastern Europe, eastern Turkey, and Benelux with a threat for daytime driven storms. Limited shear is present, so the storms should be less organized and mostly remain sub-severe.