New data of #COVID-19 effects on the significant decline of nitrogen dioxide over China, now again increasing as lockdown is over

The new data analysis by the Copernicus Sentinel-5P satellite reveals significant changes in the air pollution across China. Data analysis between late December and mid-March shows a significant decline in nitrogen dioxide (NO2) emissions during China’s national lockdown in January and February, followed by an increase of air pollution once the national lockdown is canceled as life and industrial activity is returning back. We can see the very high values of nitrogen dioxide (NO2) emissions before the lockdown, much lower values during quarantine and again higher values after it was canceled. This decline of emissions is a factual effect of the nationwide lockdown to prevent the spread of the Coronavirus / COVID-19 outbreak.

We can observe very high concentrations of nitrogen dioxide (NO2) emissions in December, a normally strongly polluted air in China. But then we can see a very significant decline in nitrogen dioxide (NO2) emissions in January, soon after the national lockdown was taken in effect. The emissions also depend on the weather pattern and cloud cover (also with the Chinese New Year in January), but the change is pretty obvious across this northern part of China where most of the densest population and activity are. Soon after the epidemic outbreak of Coronavirus / COVID-19 happened, China’s authorities made very robust restrictions with the complete lockdown of transportation, factories, and industrial activity. This very much helped to reduce emissions. In early/mid-March, China reported that the Coronavirus epidemic has ended, so many provinces have downgraded their emergency response levels. Schools, factories and other public spaces are now starting to re-open, the industrial activity is increasing. This has also soon responded in the nitrogen dioxide emissions as they are now again in an increase through mid and late March. Still, they remain much lower than before the outbreak:

Here is the animation, using data from the Copernicus Sentinel-5P satellite, shows the nitrogen dioxide emissions from late December 2019 until mid-March 2020 – using a 10-day moving average. The drop in emissions in late-January is visible, coinciding with the nationwide lockdown. From the beginning of March, the nitrogen dioxide levels have begun to increase as an activity over China is coming back to life again.

Note: The Sentinel-5P satellite is dedicated to monitoring air pollution around the world.

Earlier this month, there was also another very impressive data analysis over Europe. An outbreak of Coronavirus in Italy has pushed the authorities to a complete lockdown nationwide, which lead to a significant decline in nitrogen dioxide (NO2) emission especially across northern Italy where most of the population, transportation, and industrial activity is present. The most affected regions are Lombardia and Emilia-Romagna over the Po valley:

The #COVID-19 environmental factual effect over Italy: The nationwide lockdown leads to significant decline in nitrogen dioxide (NO2) emission

There is also another interesting effect of Coronavirus outbreak lately – Global CO2 levels have temporarily stopped rising, likely due to the industry slowdown during the outbreak:

See also – a strong cold outbreak is spreading into east-central Europe and the Mediterranean this weekend, continues next week:

An exploding North Atlantic low will spread towards western Europe, the cold front will push into Ireland and the UK 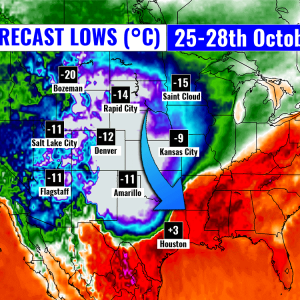 «Next Post Cold outbreak with the significant temperature drop in the next days – *HIGH risk* for damaging frost of fruit trees across west-central Europe, Italy and the Balkans
A rapidly intensifying extratropical cyclone in the North Atlantic this weekend – broad severe winds towards WNW Europe Previous Post»