Earth can breathe better lately, as global commercial air traffic has seen some substantial decline, followed by the robust restrictions during the Coronavirus / COVID-19 pandemic outbreak around the world. There has been more than a 30% drop in global traffic this month, compared to March 2019. And even sharper decline over the last through mid/late March – almost 50% less commercial flight operations globally!

A significant decline in the air traffic (especially commercial flights) began in late January, continued through February. By the end of February and early March, some higher traffic was noticed again, mainly due to China’s recovery and restart of some of the flight operations and routes. However, a very sharp decline happened after the mid-March as many countries around the world began with robust restrictions on global travels. Such a trend continues into late March as many countries are implementing similar restrictions as well. Attached are the 7-day moving average of all flights tracked by Flightradar24 from May 2016 to late March 2020 and from Jan 1st to March 18th (comparing both 2019 and 2020 years). 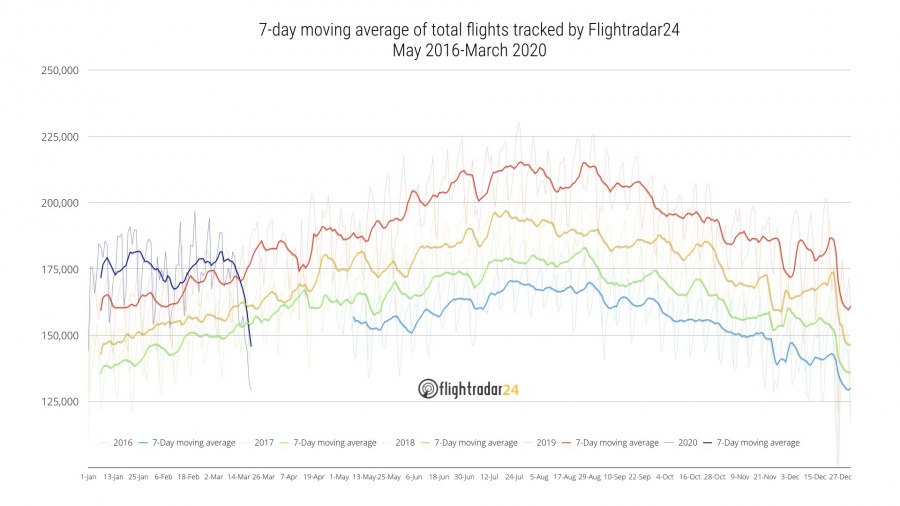 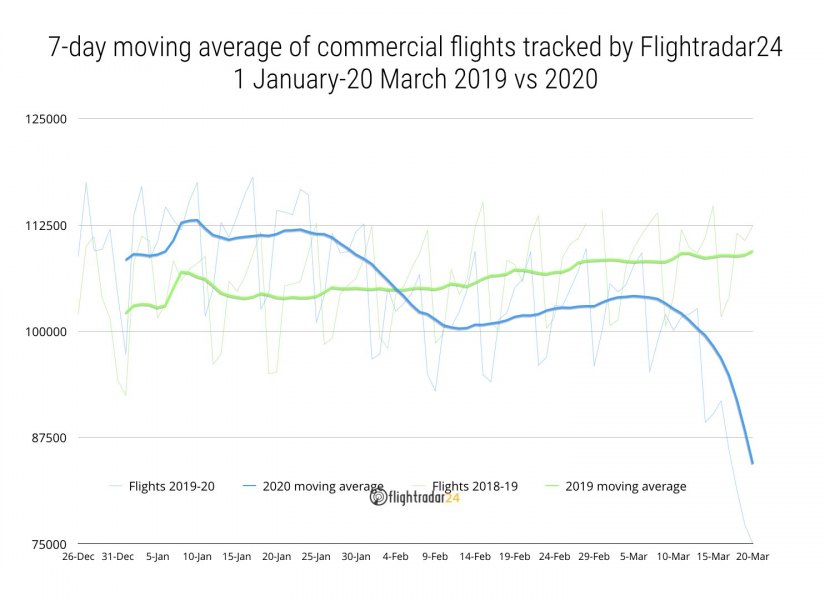 Here is a comparison graphics of the flight’s activity in the morning hours (European time) between Feb 23rd and March 23rd, 2020, we can still see a lot of traffic, but quite less traffic across the Atlantic and the Pacific oceans. This is mostly due to US restrictions of flights from eastern Asia towards the United States and the same from Europe towards the United States:

We could also track a lot of airplanes with special flight plans related to COVID-19 outbreak, mostly delivering medical help to various countries:

An Ilyushin Il-76 from Russian Aerospace Forces is en route from Moscow to Rome with medical help to Italy. This is just one flight out of nine flights expected.https://t.co/iRRmx9aDB5 pic.twitter.com/yzGKcCX4q9

The two Austrian Airlines Boeing 777 aircraft with medical equipment are about 1 hour away from landing in Vienna.

The 130 tons of cargo is carried both in the cargo hold and in the cabin.https://t.co/mZmsEPGb4Vhttps://t.co/5XxNmTF3H1 pic.twitter.com/tyCQtW6JAN

A Wizzair flight is en route from Budapest to Shanghai, via Nur-Sultan (former Astana), in order to bring medical supplies back to Hungary https://t.co/PAMVBLWOh8 pic.twitter.com/5Gr3r9UfL8

As mentioned above, numerous companies are closing their routes due to lack of passengers and indeed the safety of their personnel for the next couple of weeks. The United Arab Emirates are also closing their traffic for at least two weeks, only the Cargo flights will remain operating. We can see a noticeable difference in flights today vs. a month ago:

The United Arab Emirates will close to passenger traffic this week for at least two weeks. Cargo flights will continue to operate. This is current traffic in/out of the UAE and a comparison with last month + closer zoom of same traffic.https://t.co/z7rFBDG6WI pic.twitter.com/zS78G05lDo

Here is another example of flights in/out from the Madrid international airport (MAD) between March 13th and 20th – just a few flights were left:

Flights to and from Madrid Airport (MAD) in Spain at 20:00 UTC time. 13th vs 20th of Marchhttps://t.co/rLK9Hlh7PG pic.twitter.com/C9yfnPvdLX

COVID-19 outbreak has also a significant effect on the nitrogen dioxide (NO2) emissions around the work. As analyzed by Sentinel5P satellite, there have been major changes over China and Italy, both being the most affected countries by Coronavirus, for now, :

The #COVID-19 environmental factual effect over Italy: The nationwide lockdown leads to significant decline in nitrogen dioxide (NO2) emission

New data of #COVID-19 effects on the significant decline of nitrogen dioxide over China, now again increasing as lockdown is over

There is also another interesting effect of Coronavirus outbreak lately – Global CO2 levels have temporarily stopped rising, likely due to the industry slowdown during the outbreak: