A severe weather setup is shaping up for France, Germany and BeNeLux this weekend. Severe thunderstorms with threats for large hail, severe winds and torrential rainfall. On Saturday, severe thunderstorms are possible in France and south-southwestern Germany. A more robust and dangerous day is expected on Sunday, with threats for large to possibly very large hail, severe winds, torrential rainfall across parts of France and BeNeLux.

After an extensive upper ridge and overall quite stable and unusually warm conditions lately, parts of Europe are entering a more dynamic weather pattern this weekend. A large trough over the eastern Atlantic will progress towards WSW Europe on Saturday, gradually transforming into a large upper low on Sunday, centered over the Bay of Biscay. To the east, an upper ridge will move onto Balkans and SE Europe, allowing a corridor of warm air advection with strong southerly jet stream in-between these large features. In addition, a good moisture recovery will be resulting both from advection of the warming Mediterranean region as well as from evapotranspiration.

The first day of interest will be tomorrow, Saturday Apr 28th. A developing active pattern can be revealed on the maps, with a deep trough entering W Iberian peninsula and a strong ridge across the Balkan peninsula. Resulting in warm/moist airmass advection from the W Mediterranean region into France and around the Alps. 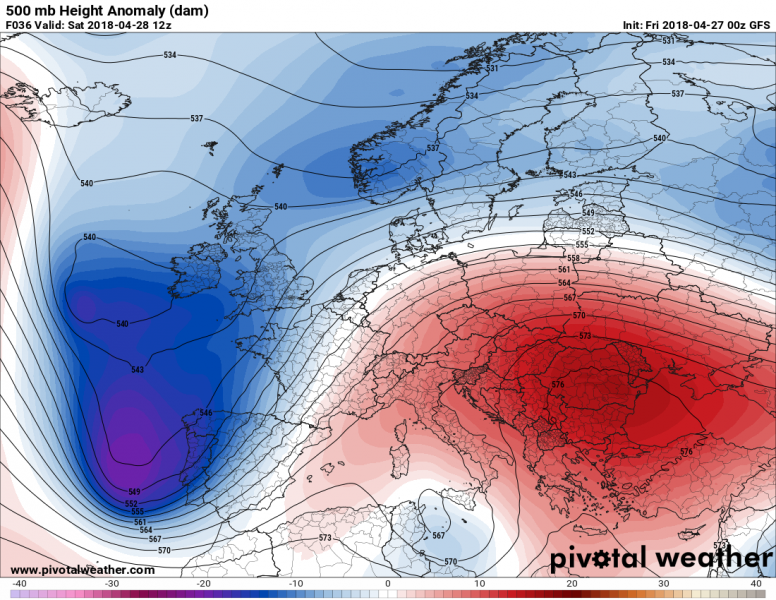 As it is the first day of moisture recovery, moisture will still be lacking, so only marginal to moderate instability will be available, despite being under moderately strong shear and a strong jet stream that will be rounding the main trough. However, some organized severe storms will be possible from France into SSW Germany in the afternoon and evening hours. Main threats will be strong to severe winds, large hail and torrential rainfall.

A more dangerous weather setup is expected on late Sunday, as the upper low pushes further NE across France and develops a significant negatively-tilted short wave trough, moving across ESE France towards Benelux.

This will result in tightening pressure gradient across from the baroclinic zone stretching from SE France across E France / W Germany towards the Netherlands, enhancing the deep layer shear into 50-70 knots range, as well as producing good helicity.

Strong diurnal heating should result in increasing instability due to the recovered moisture across most of central Europe. It appears likely that MLCAPE will well exceed 1000-1500 J/kg in many areas, allowing plenty of fuel for thunderstorms. Combined with an aforementioned strong deep layer shear and helicity, widespread organized thunderstorms are likely. Those will be capable of producing severe weather, including large to very large hail (diameter of 3-5 cm likely), severe damaging winds and torrential rainfall. Good SR helicity enhances some threat for tornadoes as well, especially across the ESE France and BeNeLux region.

Simulated radar reflectivity based on WRF model for Sunday afternoon hours indicates that an organized convective system will likely be pushed across NE France and Benelux. With the favorable conditions available, threat for severe damaging winds and large hail could effect a broad area from NE France across BeNeLux (MCS possible).

Total 24-hour rainfall accumulation (per WRF model) for Sunday, some areas could receive quite an excessive amount of rainfall as the shear profiles and moisture content through the baroclinic zone allow maintaining of both convective and statiform precipitation. Expect 50-80 mm of total rainfall over broad areas.

We are closely monitoring the evolution of this trough and severe weather potential and will be updating through the weekend – stay tuned!