Spring is the transitional period between winter and summer. That means that we can witness fast weather changes and many great dynamics. One of these dynamics is coming soon, with quite far-reaching effects.

This article is an update on our outlook article of the 10-15 day pattern development from previous week:

The period we are currently focusing on is week 4 of April. As we wrote in our previous outlook article, the main point of uncertainty was the development of the blocking high ridge in the North Atlantic. Models have become more clear now, and reveal a very strong high-pressure system forming in the next 6-9 days. Its formation is powered by the strong low-pressure system over the Canadian sector. Below is the GEFS ensemble model forecast, showing the strong blocking ridge in the North Atlantic. 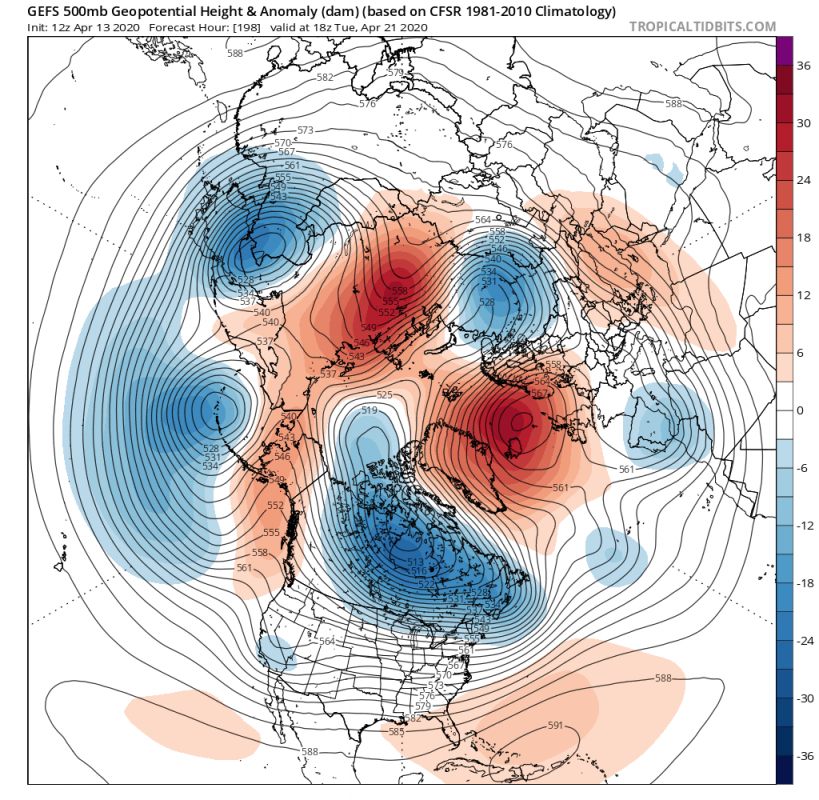 The blocking high over the North Atlantic will establish a very strong position, together with a similar blocking ridge over Siberia. The temperature anomaly forecast reveals that abnormally warm airmass will be transported into Siberia, and into the Polar circle over Greenland. At the same time, colder air will be transported out of the pole, into Canada and across Scandinavia into parts of eastern Europe. 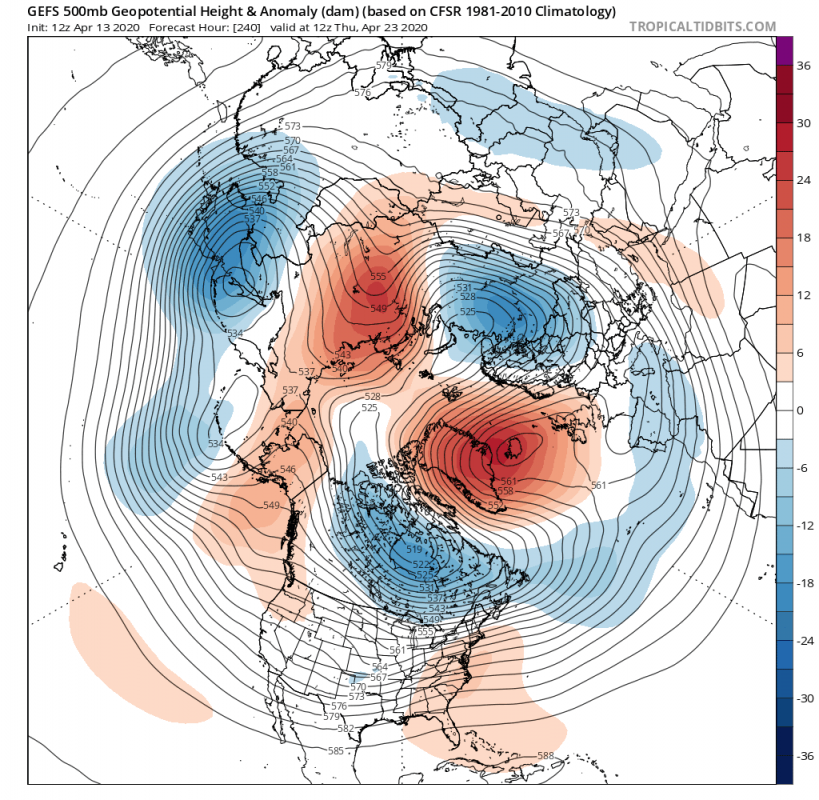 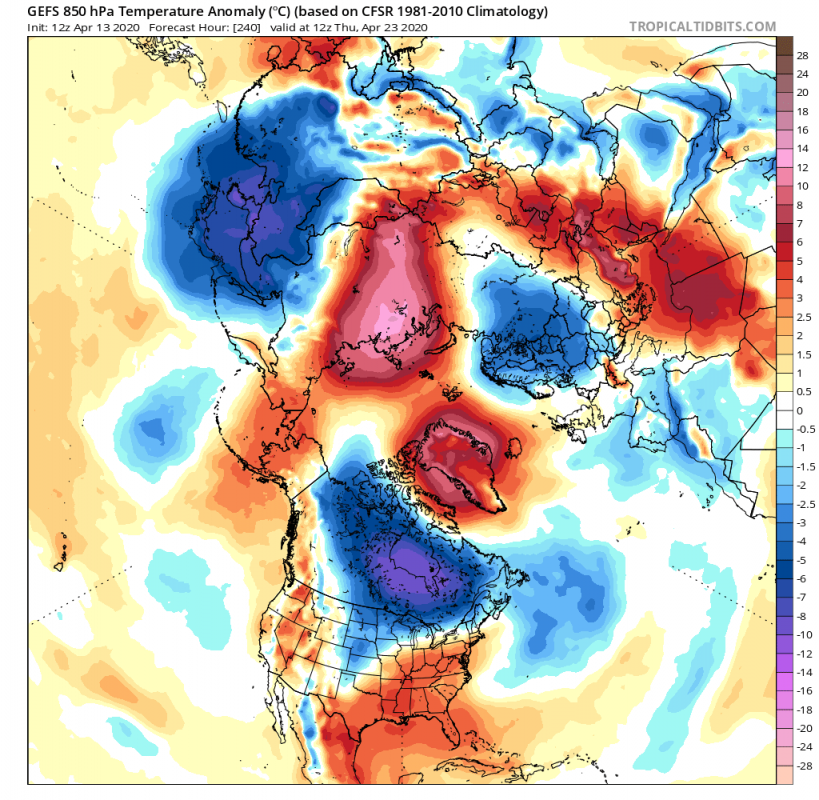 This Atlantic blocking ridge will actually be strong enough, that it will effectively disrupt the polar vortex circulation on all levels. Looking at the two charts below, we have the 30mb and 10mb geopotential height (23 km and 31 km altitude respectively), where we can see the strong influence of the North Atlantic ridge, as it presses the stratospheric polar vortex away from the polar regions, displacing it towards the Siberian sector. 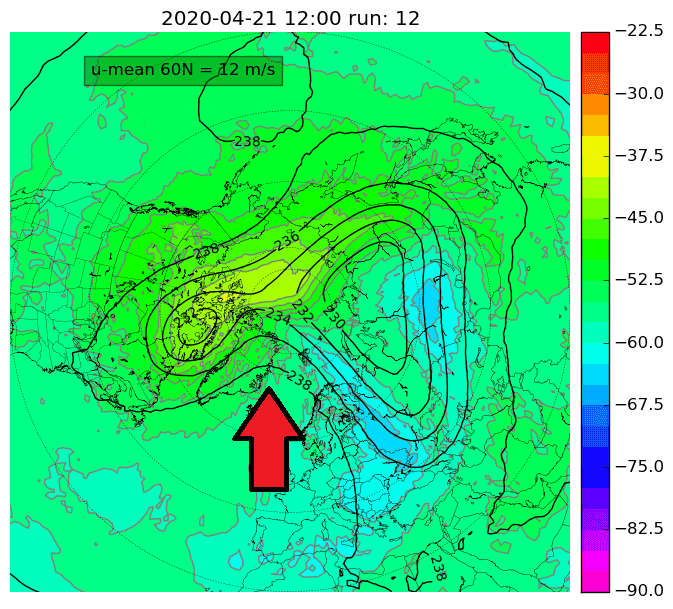 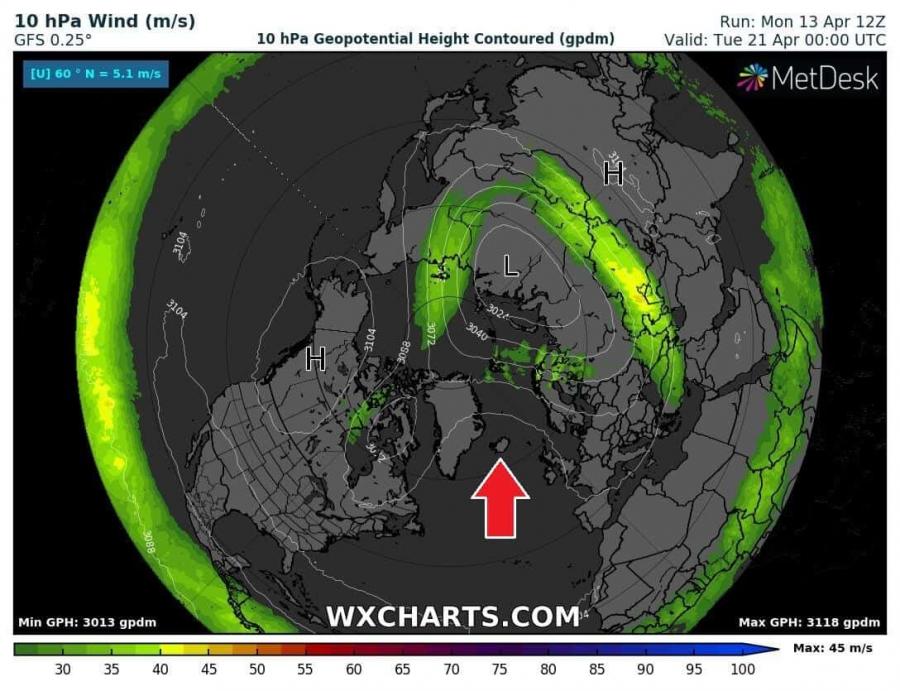 The disruptions to the stratospheric polar vortex will be strong enough, to effectively end the reign of the polar vortex, weakening it to the point where it will not recover anymore. This is essentially the final warming event. The graphic below shows the strength of the stratospheric polar jet stream, where we can see it reducing and going into negative values. That means that the stratospheric circulation has turned into the anticyclonic mode, which is typical for the warm season. The current projected end of the polar vortex (cyclonic mode) is on April 22nd. That is around 7 days later than the climatological long term average. 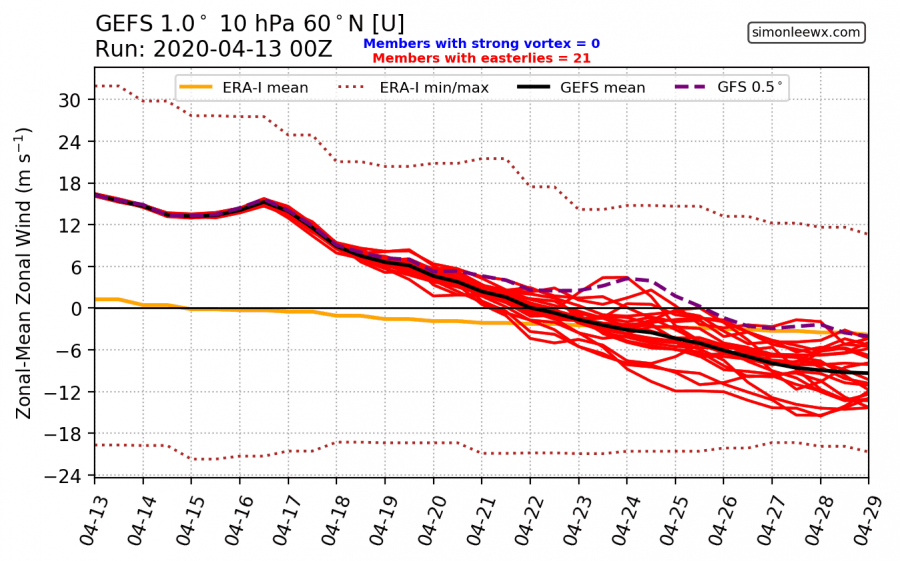 We can see the relocation of the polar vortex, as a low-pressure area, extending from the Siberian regions into Scandinavia and into parts of central and eastern Europe. This is essentially the main core of the tropospheric polar vortex, connected up into the mid-stratosphere. This low-pressure area actually promotes southerly flow on its eastern side, further boosting the transport of the abnormally warm air into the Siberian region and the polar circle. On its western side, colder air is being transported from the north, down into Scandinavia and parts of central/eastern Europe, and extending west into the British isles, on the reverse zonal flow. A situation like this in mid-winter would bring proper cold and snow to Europe. This is essentially what the expected result would be from a Sudden Stratospheric Warming event in winter (“the beast from the east” in the United Kingdom). The strong blocking ridge continues to bring warmer than normal airmass into Greenland and the Arctic. Over North America, the bulk of the cold air remains in the Canadian sector. 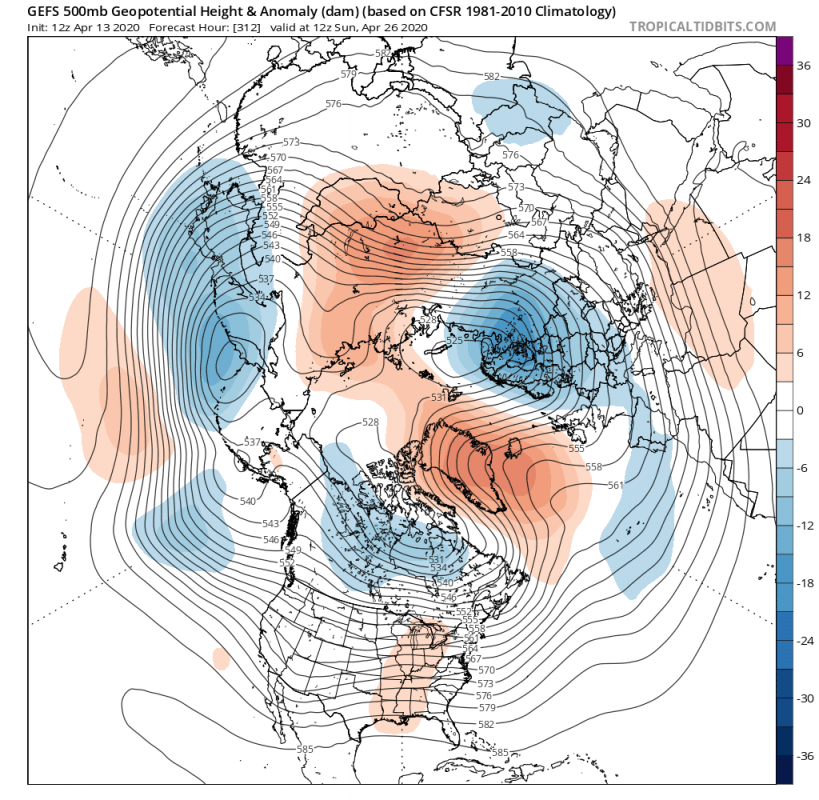 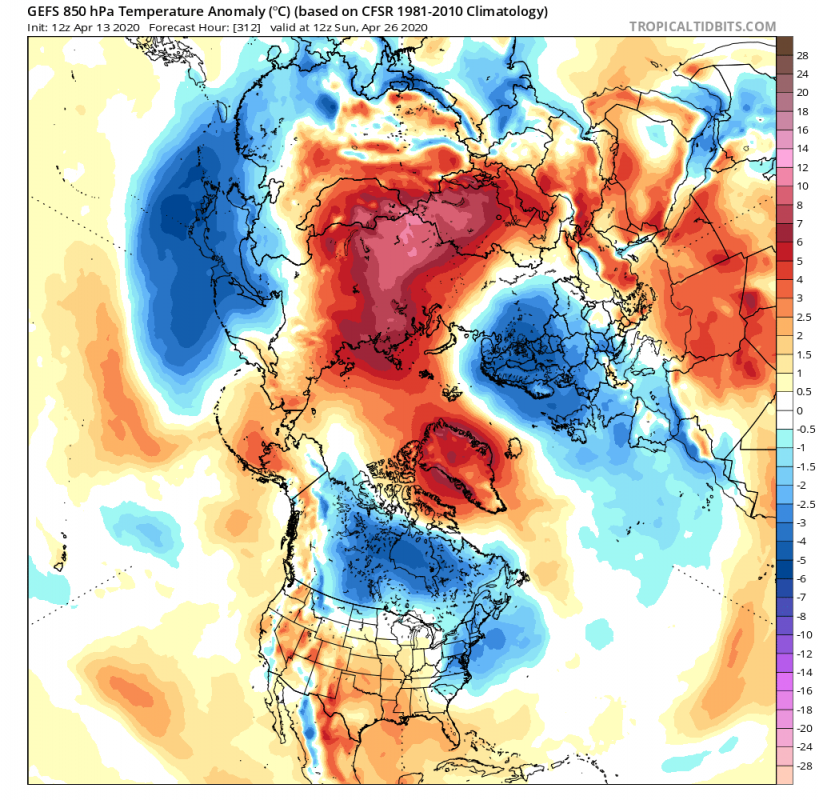 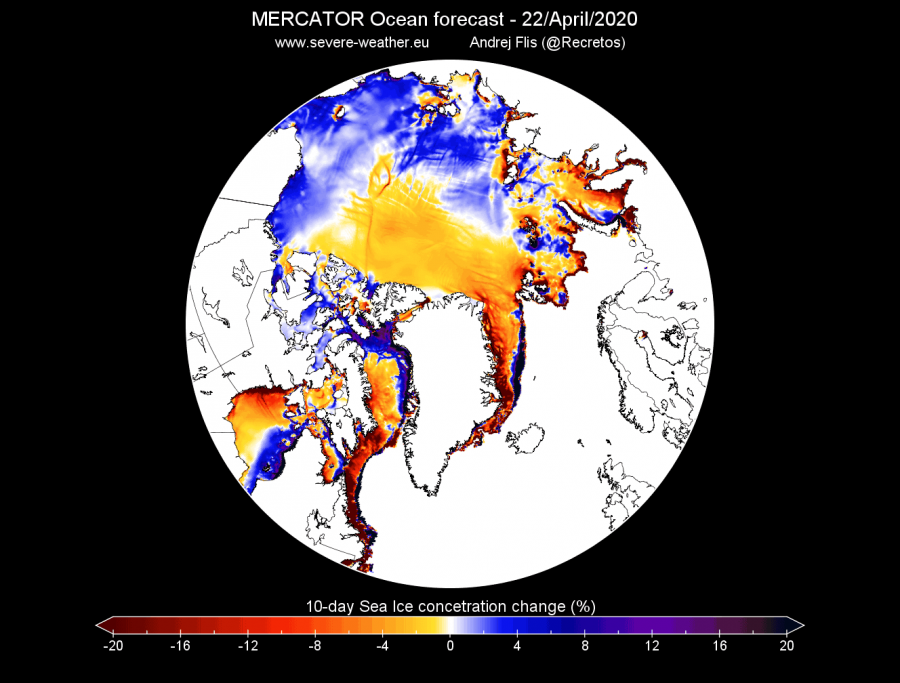 The Arctic sea ice analysis from NSIDC shows the current sea ice extent is already well below normal, so this is not a good outlook for the future of the sea ice extent, as the melt season has just begun. 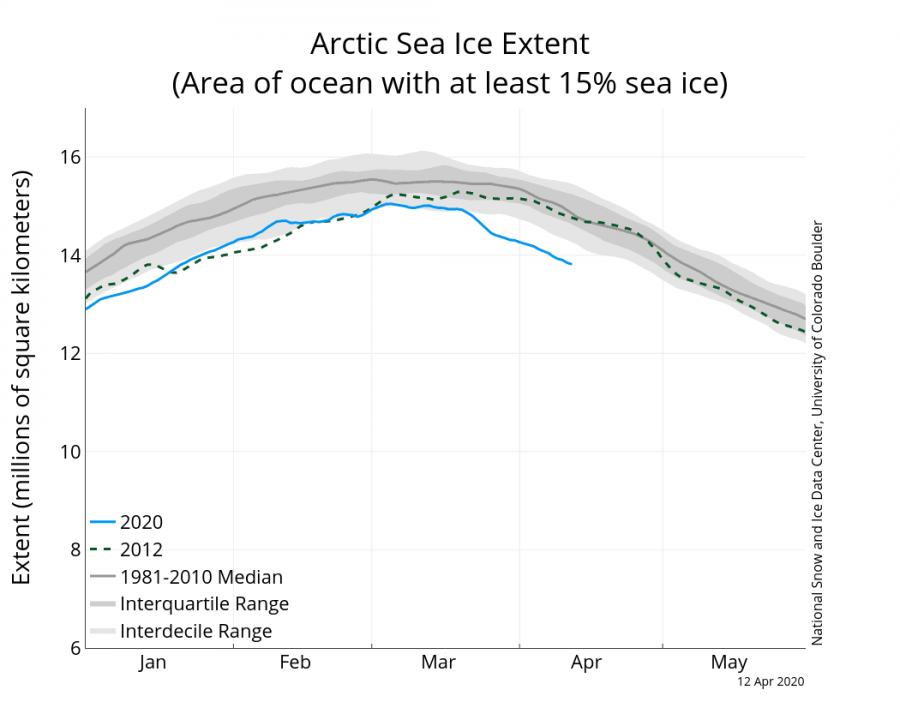 The last days of April are currently projected to continue with a similar pattern. The North Atlantic blocking high is currently forecast to slowly reduce in strength, while the Siberian high is still present. The main feature is the persistent low-pressure area over western Siberia and Scandinavia region. That will keep the unseasonably cooler air in the region, with a chance of potential transport into parts of central and eastern Europe, and also expanding west into the British Isles if the Atlantic ridge persists. Over the USA, this pattern usually means a lower potential for severe weather outbreaks, but any cold front coming from the north can be a potential threat, especially since the Gulf of Mexico is abnormally warm this year, and is a stronger-than-normal source of a warm and moist airmass, which provides fuel for the severe weather outbreaks. 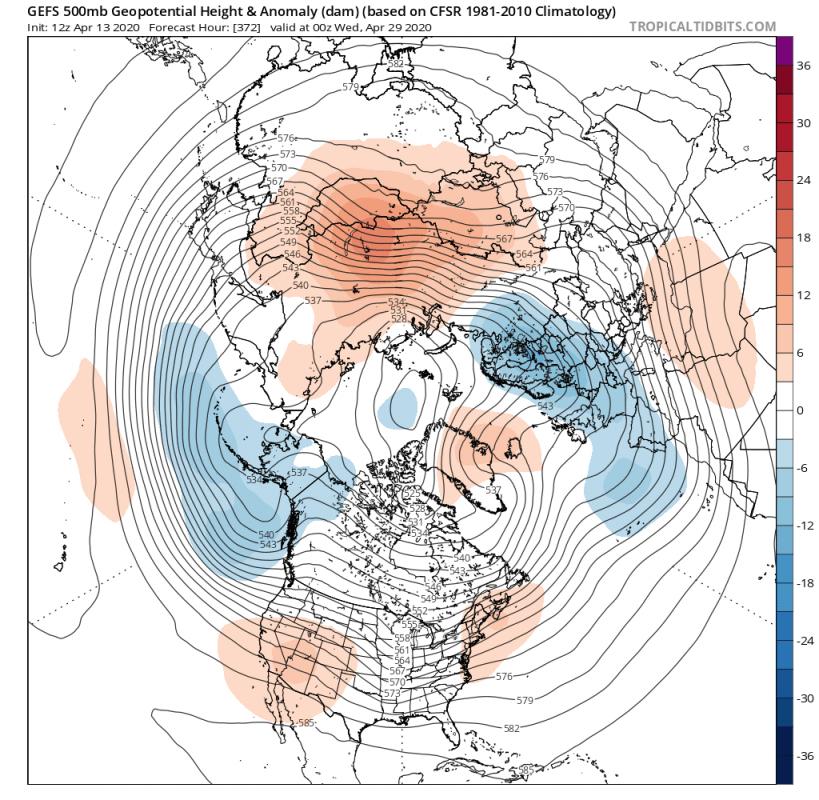 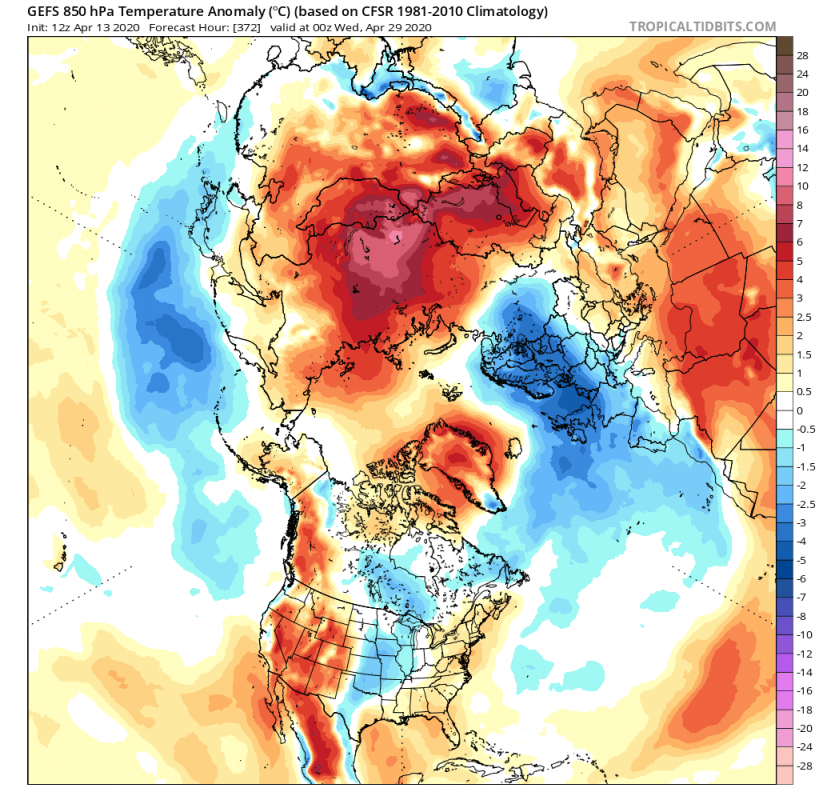