Severe storms with a threat for large hail, severe winds, and torrential rainfall with flash floods are again expected across France, Benelux, England, Germany, and across the Alps into western Balkans on Thursday. Severe storms are also expected along the cold front from the eastern Black Sea into Georgia, as well as over northern Algeria. 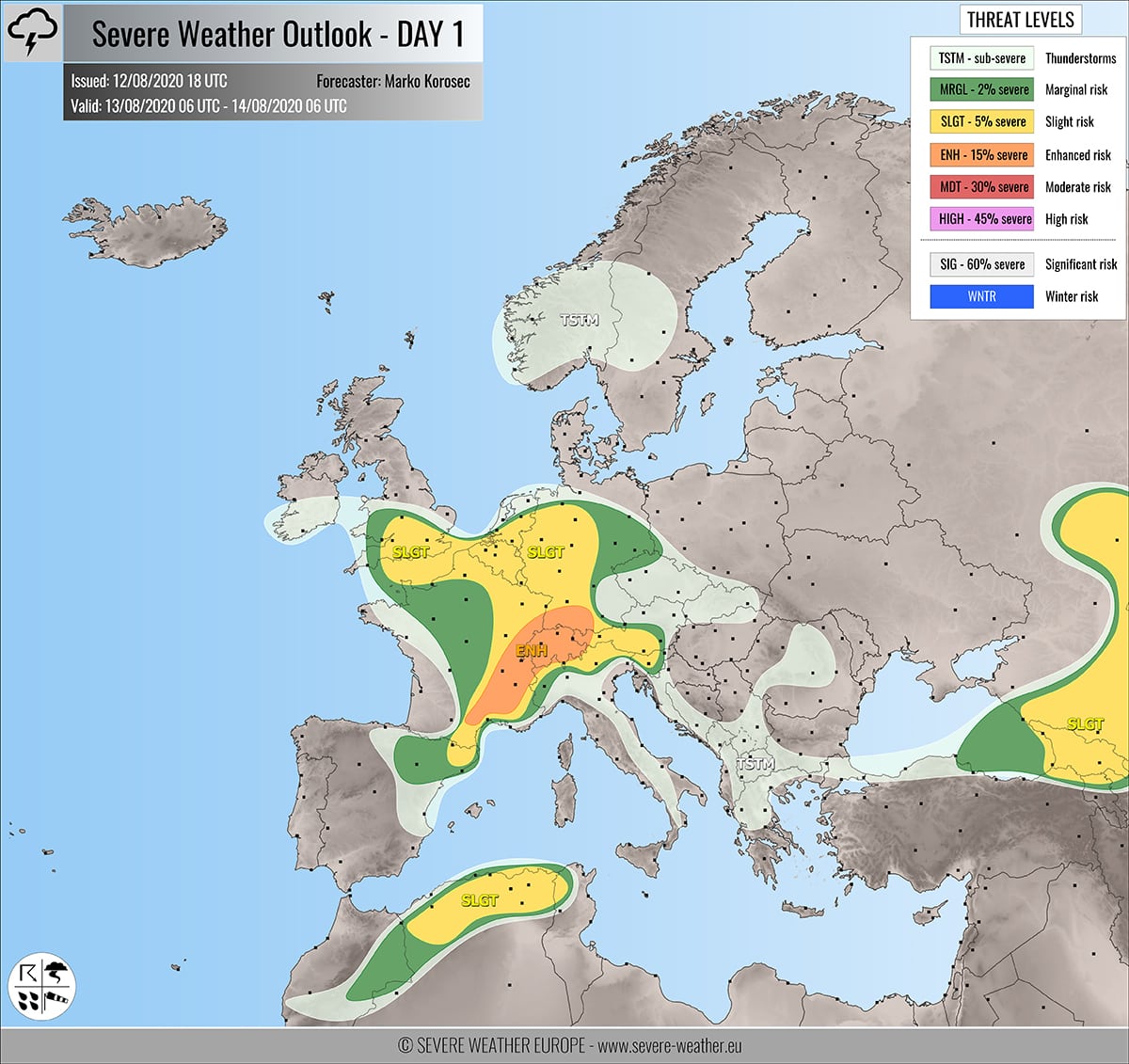 The upper ridging over Europe is gradually collapsing while a weakening upper low over France and the Bay of Biscay dissipates. Another deepening upper low approaches Iberia from the North Atlantic. The upper low across western Russia is expanding, with an associated surface cold front pushed towards Georgia. 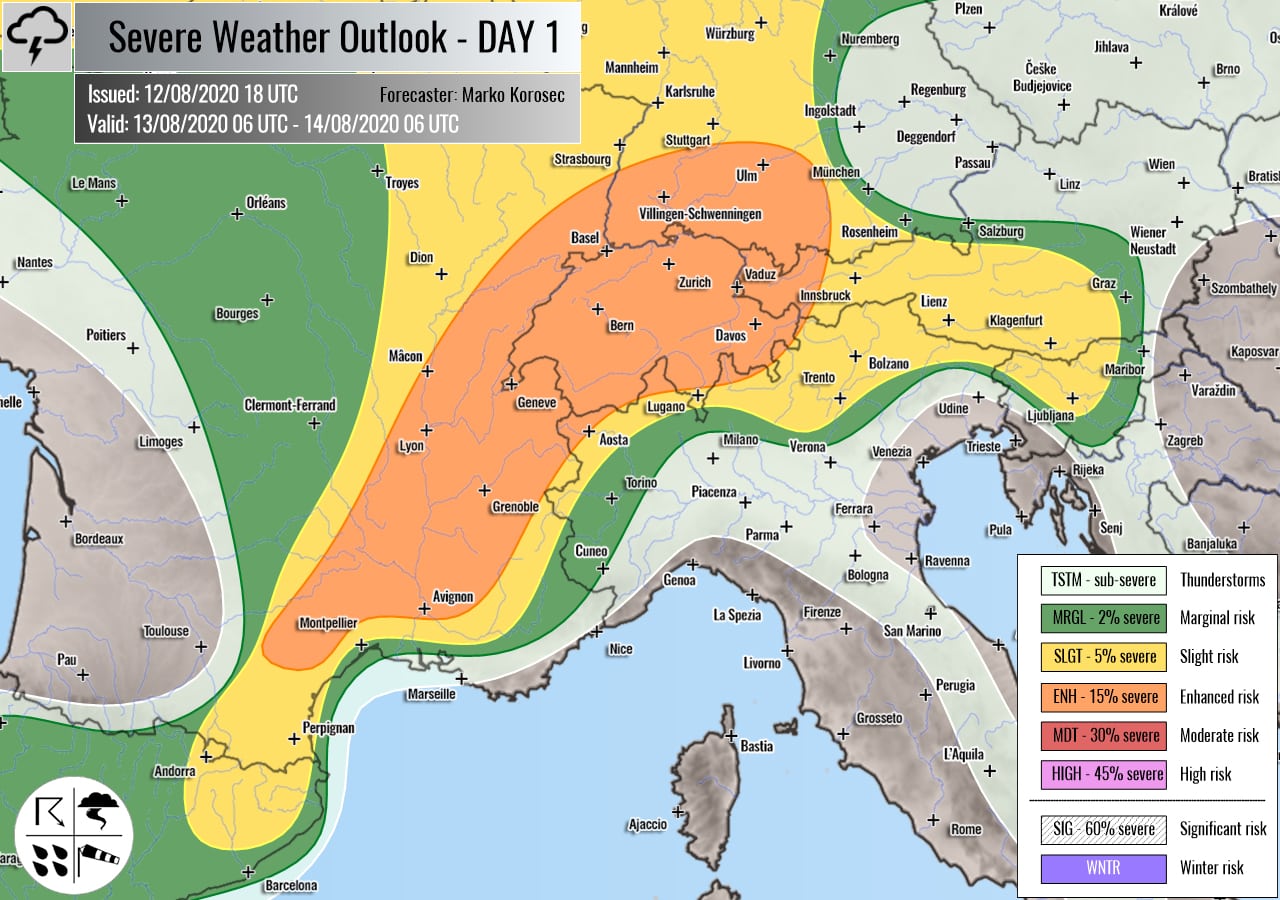 ENH risks have been issued for southeast France, Switzerland into southwestern Germany with a threat for severe storms, capable of producing severe winds, large hail, and torrential rainfall with flash floods.

Moderately strong instability is again expected to build up across the forecast areas, under weak to moderate wind shear. Conditions should support scattered to widespread convective initiation by the early/mid-afternoon. Strong multicells and a few supercells are likely to form.

While the primary threats will be excessive rainfall and flash floods, some more intense storms should also enhance the threat for large hail and severe winds. Especially across southern France. Further north, slow-moving storms are expected and result in high rainfall sums. 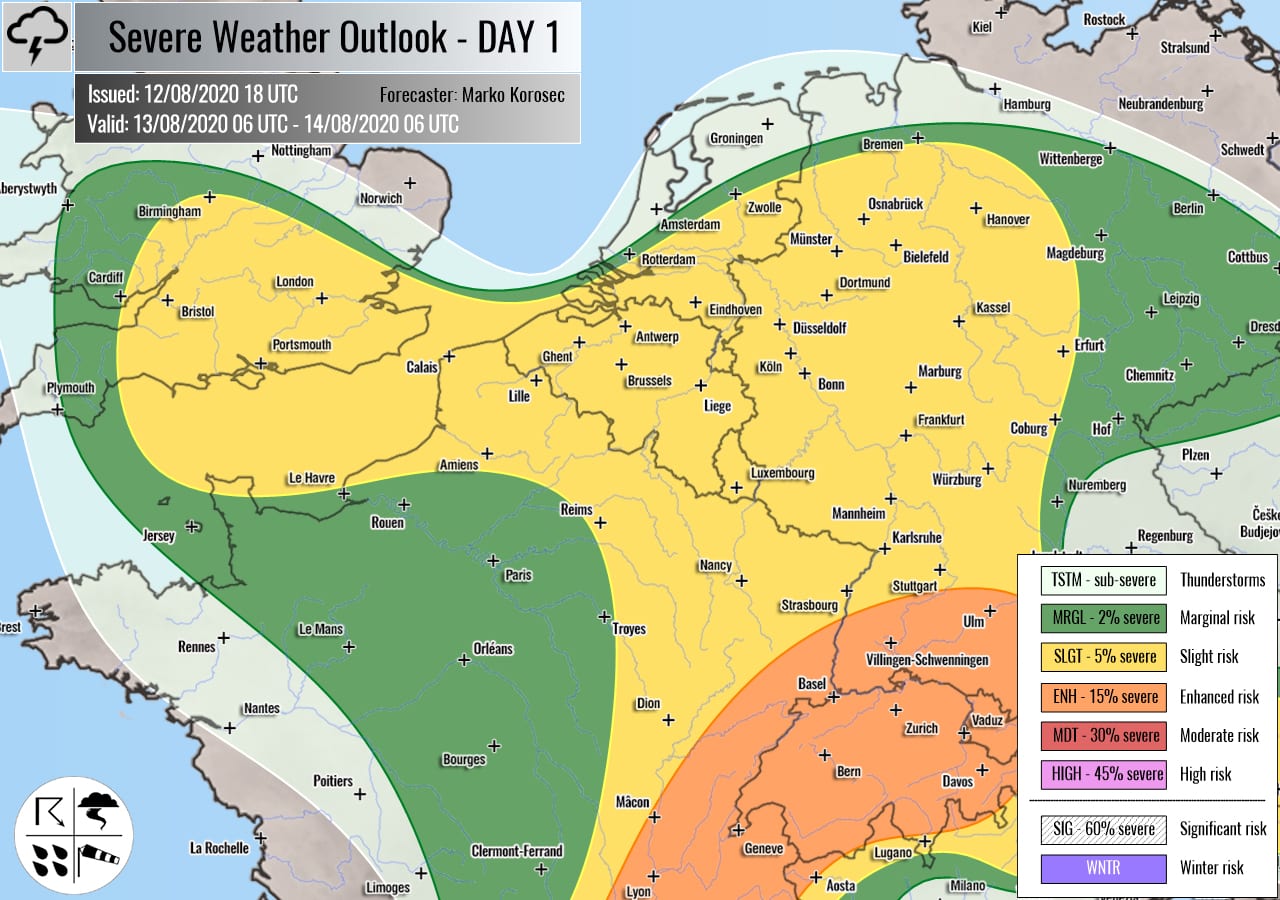 SLGT risk has been issued for east-northeast France across Benelux into west-central Germany, the English Channel into southern England with a threat for severe storms, capable of producing severe winds, marignally large hail, and torrential rainfall. 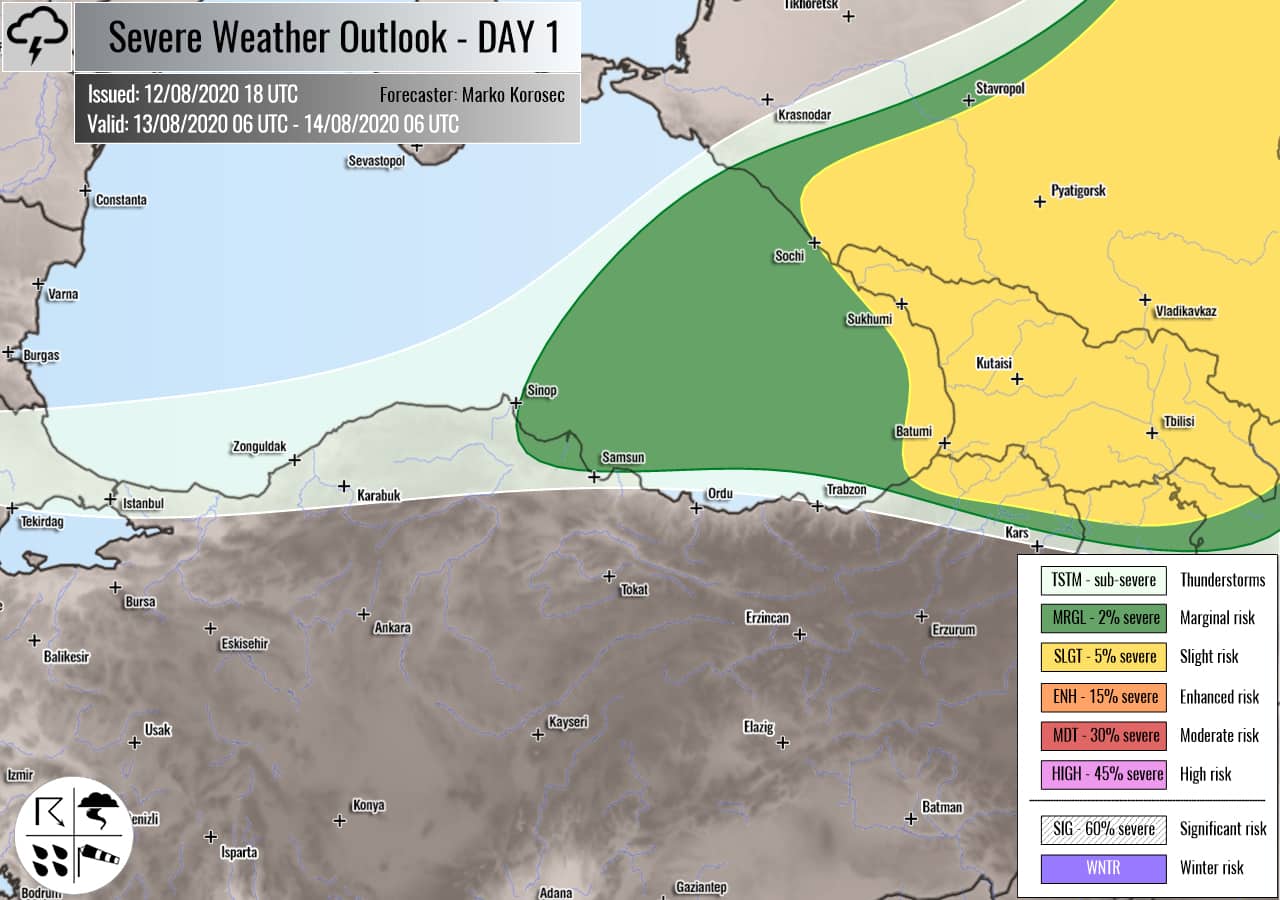 SLGT risk has been issued for eastern southwestern Russia into Georgia with a threat for severe storms, including supercells along the moving col front. Those will be capable of producing torrential rainfall with flash floods, large hail, and severe winds. 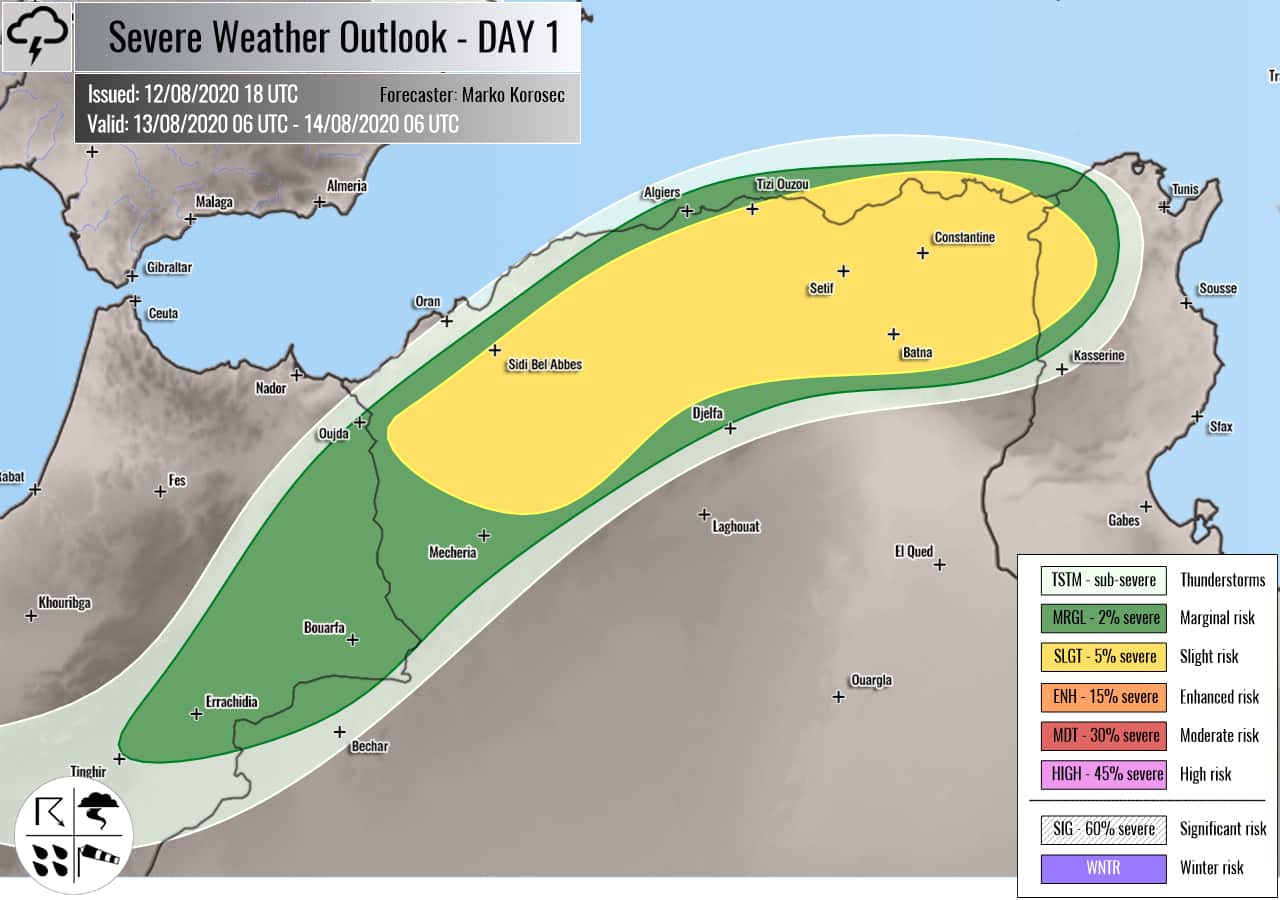 SLGT risk has been issued for northern Algeria into northern Tunisia with a threat for a few isolated severe storms, capable of producing severe winds and large hail.

Activity will be related to the decaying upper low over southwestern Europe. Daytime heating should contribute to moderate CAPE and shear to support organized storms in the afternoon. A few isolated storms, including supercells, are possible with large hail, torrential rainfall, and severe wind threats.

TSTM risk areas have been placed across Ireland, southwestern Scandinavia, Italy and the Balkans Turkey with a threat for daytime driven storms. Limited shear is present, so the storms should remain sub-severe.