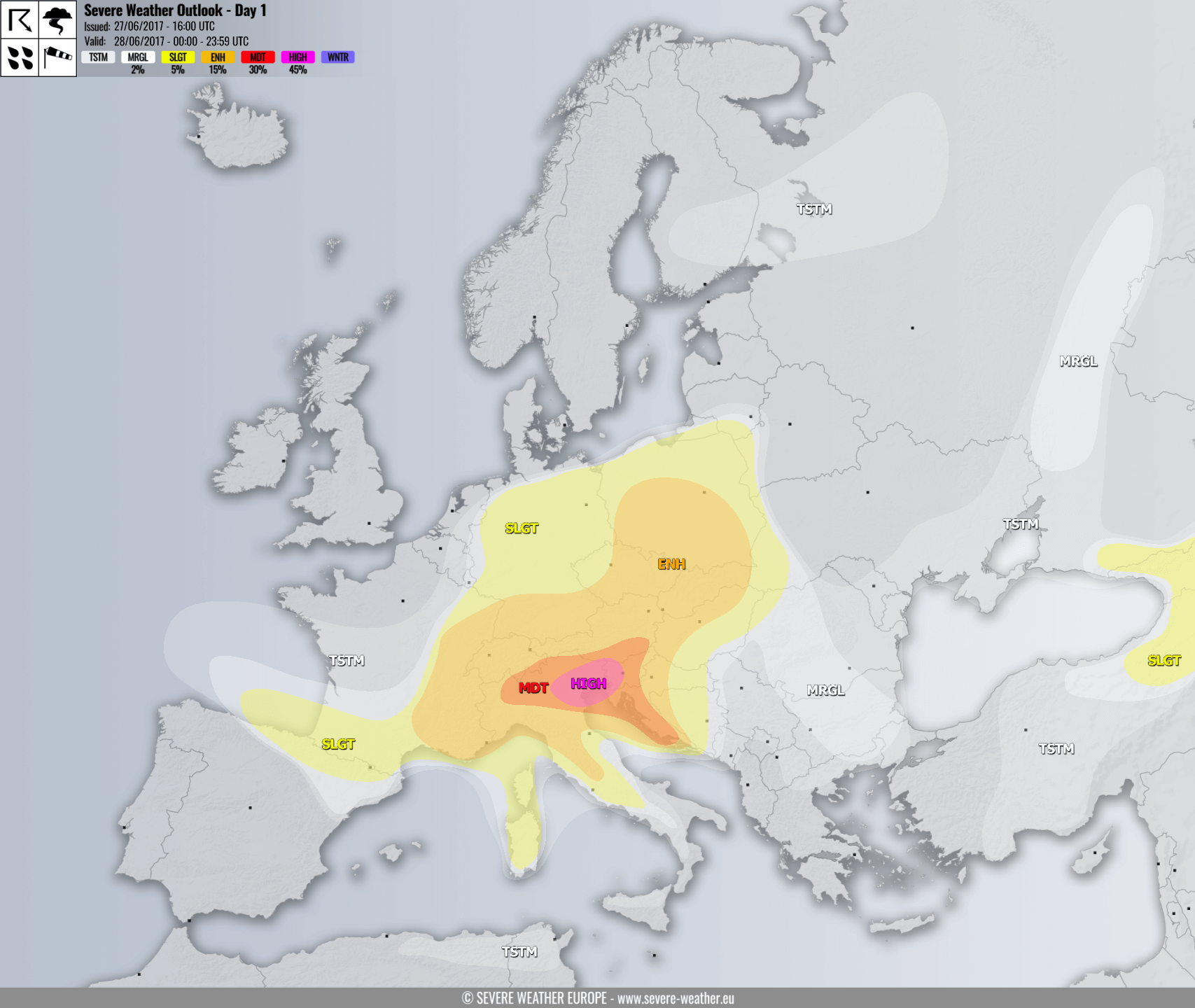 *** A severe weather outbreak is expected across the southern Alpine region on Wednesday! Very large hail, severe damaging winds, tornadoes and torrential rainfall with flash floods are likely to occur! ***

A potentially dangerous setup is shaping up as a long-wave negative-tilted trough moves from W Europe into the western Mediterranean. The trough is rounded by a very strong, 60-80 kt mid-level (500 mbar) jet stream nosing into N Mediterranean, resulting in very strong shear in 50-70 kt range and overlapping with an extremely unstable airmass in place over the Mediterranean. A large surface low with a frontal system moves across central Europe where warm front advects across N-CNTRL Germany/Poland and cold front is pushed from France towards the Alps and central Europe. A stationary frontal boundary remains over SW Russia.

A HIGH risk has been issued for NE Italy, extreme N Adriatic sea and NW Croatia into W Slovenia where robust and well organized severe thunderstorms are expected. Threat for very large hail, severe damaging winds, torrential (excessive) rainfall with flash floods and tornadoes exists. High coverage of severe storms is expected and especially excessive rainfall threat along the S Alpine flank due to the persistent orographic and convective precipitation (high rainfall sums of 100-200 mm are possible) through much of the day.

A MDT risk has been issued for the area surrounding the HIGH risk area across N Italy (Po valley and the southern Alpine flank) into CNTRL Slovenia, S Austria and W Croatia where lesser storm coverage is expected. Main threats will be torrential / excessive rainfall, large hail and severe damaging winds.

During the second half of the day, the trough axis enters the Alpine region with a sharp left-exit jet region across the risk area, providing large scale ascent for convective initiation. In response to the deep trough a secondary Lee/thermal low forms over N Italy, resulting in intensification of the low-level wind field from the very warm Adriatic sea (surface temperature 2-3°C above long-term average) and rapid moisture pooling onto the risk area region is expected, resulting in enhanced storm-relative helicity into 200-400 m2/s2 range. Boundary layer will be characterized by highly to extremely unstable airmass, with dewpoints in the low 20s and mixing ratios ranging between 14 and 17 g/kg. Various high-resolution models are hinting at extreme instability available, particularly over the Ligurian sea, much of north Italian plains (Po valley) and broad north Adriatic region. It is quite likely that 2000-3000 J/kg of MLCAPE will build up ahead of the trough, while SBCAPE values should exceed 3500 J/kg in places. Therefore the overlap of extreme instability and strong shear and helicity will provide a robust environment for explosive severe storms from midday onwards into afternoon and evening hours.

Some storm activity (possibly a cluster of storms / MCS) will already be ongoing across the W Alps of NW Italy through early morning while it appears likely that first storms (possibly elevated in nature) could also occur during the first daytime hours across the plains, in response to the strong warm advection on the nose of the LL jet. Mid-levels will be characterized by a strong EML, holding the storm initiation over the plains until early afternoon when convective temps will be reached and large scale forcing will be pushed from the west. Once the cap weakens, rapid storm development and organization will take place, fueled by the extreme instability in the strongly sheared environment. Intense supercells with very large hail (locally 5-8 cm), severe damaging winds in excess of 90-120 km/h and very heavy torrential rainfall are expected. As storm motion will be rather fast, excessive rainfall threat on the plains will be less dangerous than further north into the mountainous terrain where training cells could occur and result in damaging flash floods.

Later in the afternoon and into evening hours, stronger pressure gradient and enhanced wind field will result in better tornadic environment across the HIGH risk area. Some of the supercell storms should be long-lived given the amount of shear in place and combined with locally enhanced helicity, a tornado or two could occur. The potential for a strong tornado should not be ruled out on the plains either. Discrete storms will tend to merge into a large cluster or two when the frontal boundary advances east and strongly enhances the wind damage and large hail potential as the system moves across NE Italy and N Adriatic into W-CNTRL Slovenia in the evening and overnight hours.

ENH/SLGT risks have been issued for broad area from Pyrenees across E-SE France, N-CNTRL Italy, central Europe, N Balkan peninsula across Czech Republic and Slovakia into Poland and W Ukraine where threat for organized severe storms is expected. Moderate instability (1000-2000 J/kg MLCAPE) will build up across the warm sector limited with cold front pushed from west to east and northwards advecting warm front from N-cNTRL Germany into N-CNTRL Poland. Despite the weaker jet stream than further south, 30-40 kt of deep-layer shear and 100-150 m2/s2 of storm-relative helicity will be available for organized severe storms in the afternoon into evening hours. Main threat with these storms will be severe winds, heavy rainfall, large hail and some chances for tornadoes. However, enhanced helicity across Slovakia and along the warm from across N-CNTRL Poland could be supportive of higher tornado threat with the strongest supercells. Southern France towards N Spain could see some isolated severe storms in strong shear, but the rather low instability should limit overall severe potential.

A SLGT risk has been issued for W Romania, CNTRL Bulgaria, NW Turkey, Georgia and parts of SW Russia with threat for isolated severe storms, large hail and severe winds will be the main threats. Convection will be diurnal driven and marginal shear should support a few better organized updrafts.