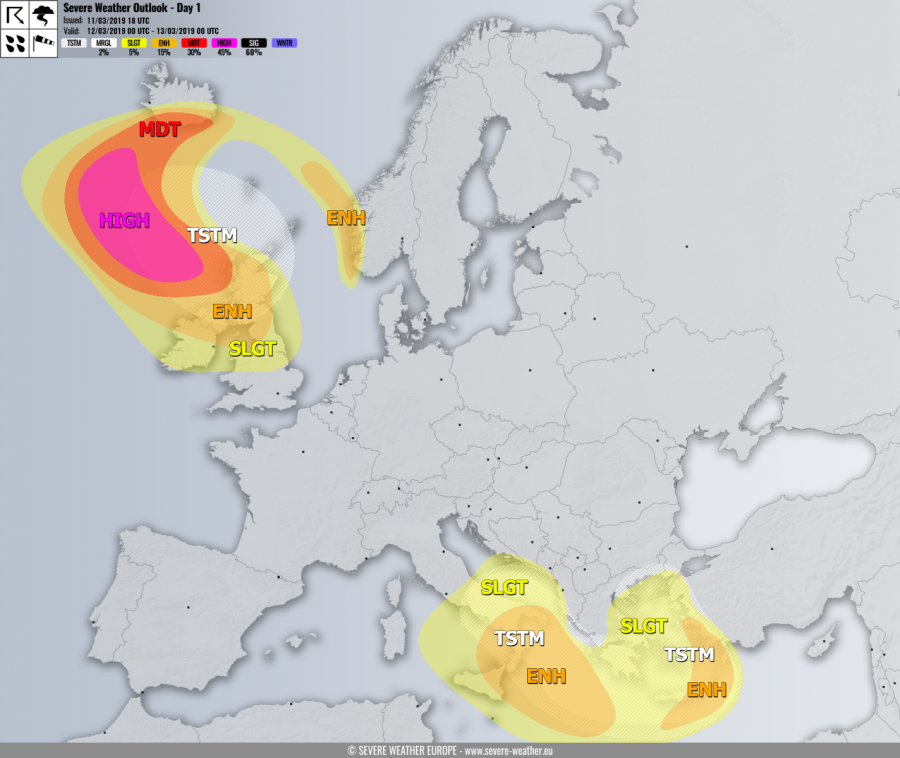 A deep trough with an intense cyclone pushes from the North Atlantic into the British Isles and Ireland. Another deep trough is located over the northwest Russia. A short-wave / low moves from the central Mediterranean across Greece and towards Turkey.

HIGH risk has been issued for parts of North Atlantic with theat for extremely severe wind gusts in excess of 160-180 km/h! Various high resolution models are hinting a development of a ‘sting-jet’ which could enhance wind gusts even more, therefore gusts could even exceed 200 km/h. Despite threat remaining over the open waters, very dangerous windstorm will result from the deep cyclone’s pressure gradient south of Iceland.

MDT risk has been issued for areas surrounding the HIGH risk including south Iceland and western Scotland with threat for extremely severe wnd gusts up to 120-140 km/h. Some downslope winds in south Iceland could even exceed 150 km/h.

ENH / SLGT risks have been issued for areas surrounding HIGH / MDT risks including south Iceland, Scotland, north-central England, Northern Ireland, Ireland and southwest Norway with threat for severe winds up to 120 km/h. The highest gusts are most likely across SW Norway and higher elevations of S Iceland and Scotland / Ireland.

ENH risk has been issued for south Italy, Sicily and Ionian sea with threat for severe winds, locally in excess of 110 km/h.

ENH risk has been issued for the eastern Crete, southeast Aegean sea into southwest Turkey with threat for severe storms capable of producing large hail, severe winds, torrential rainfall and tornadoes along the leading cold front. A sharp frontal boundary will be moving from west to east during the afternoon and evening hours. Favorable moderately strong shear and instability with enhanced low-level helicity should support strongly organized line of storms, including supercells with tornado threat.