Meteorological autumn is upon us, and usually that means that the mighty polar vortex is about to make its seasonal return. You can read in the article linked below what the polar vortex is and why it forms every year.

Every autumn when the north hemisphere receives less light and heat from the sun, the polar region start to cool. Due to the processes described in the article linked above, pressure starts to drop as the atmosphere above the North Pole starts to cool. What forms higher in the stratosphere is similar to a large cyclone. Its not the same, but it is easier to explain it as a large cyclone or a hurricane, when it is at its peak strength. Below we see the GFS forecast for late September, where we see the polar vortex getting its classical shape as the temperature and pressure drops. Forecasts are for the 10mb pressure level, which is at around 30 km altitude. For the stratospheric polar vortex to have major influence, it needs to “connect” or couple with the troposphere, where all the weather is. That usually happens by default as the polar vortex cools when we get closer to winter. But there can be exceptions. 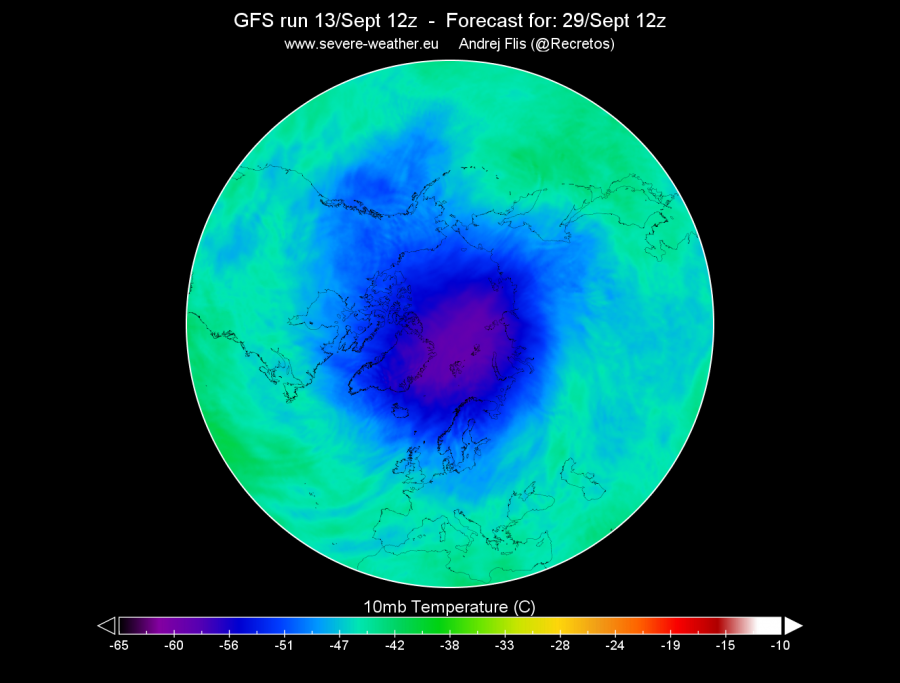 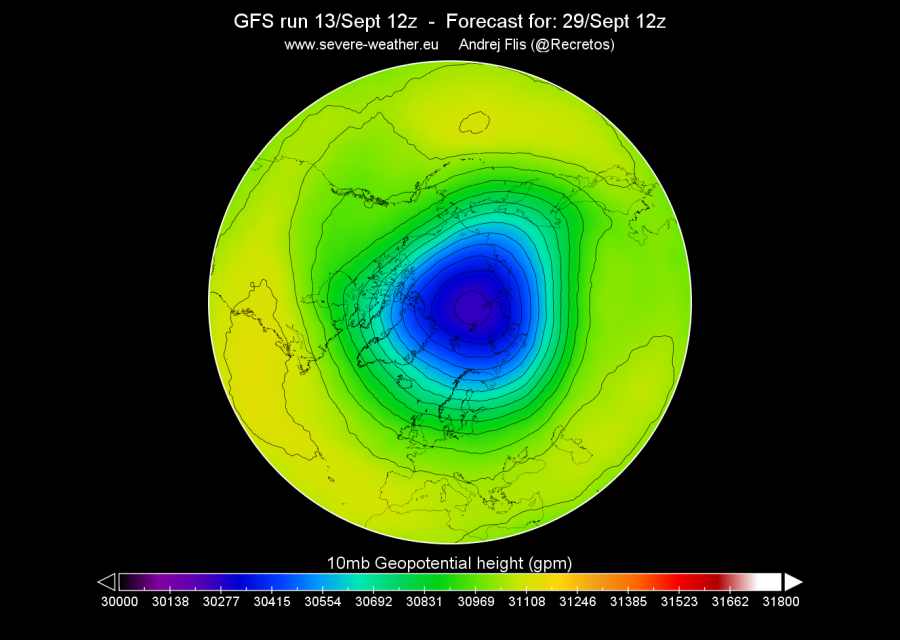 Model forecasts for the stratosphere are much more reliable than the surface forecasts for the longer term. Stratosphere is high in altitude (15-50 km). Pressure here is 10-1000 times lower than at the surface, there is almost no moisture, and all there is to forecast is one large cyclonic area. It gets more complicated when more dynamics are induced via mountain torque events, Rossby wave breaking and vertical wave propagation, which can eventually trigger a Sudden Stratospheric Warming event.

Looking at the changes over 16 days, it looks quite normal for this time of year in the middle-stratosphere layers. Temperature drops by around 6-10°C, and geopotential heights go down by 600+ meters, as the pressure drops. 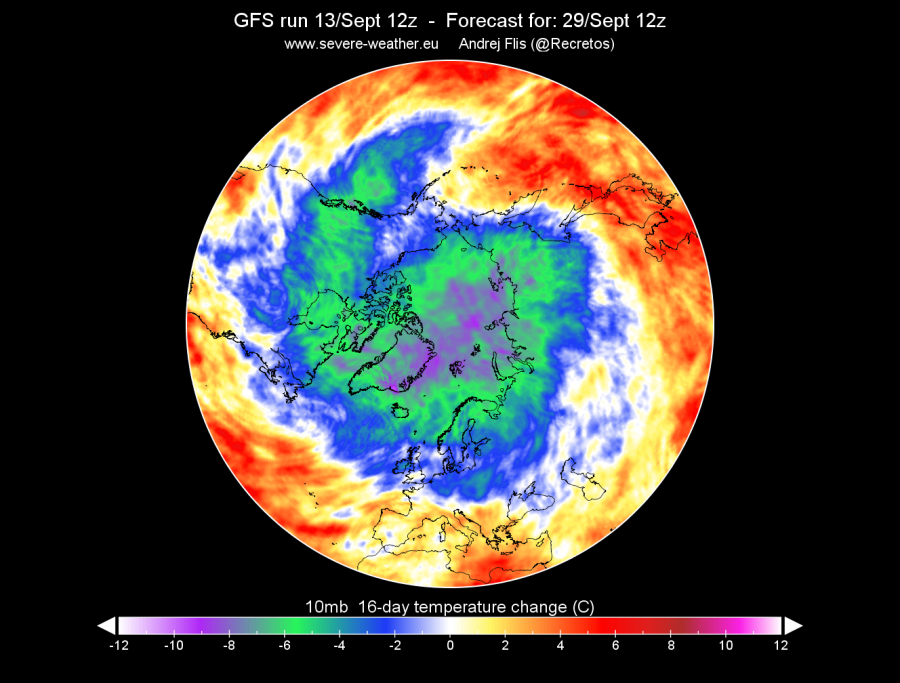 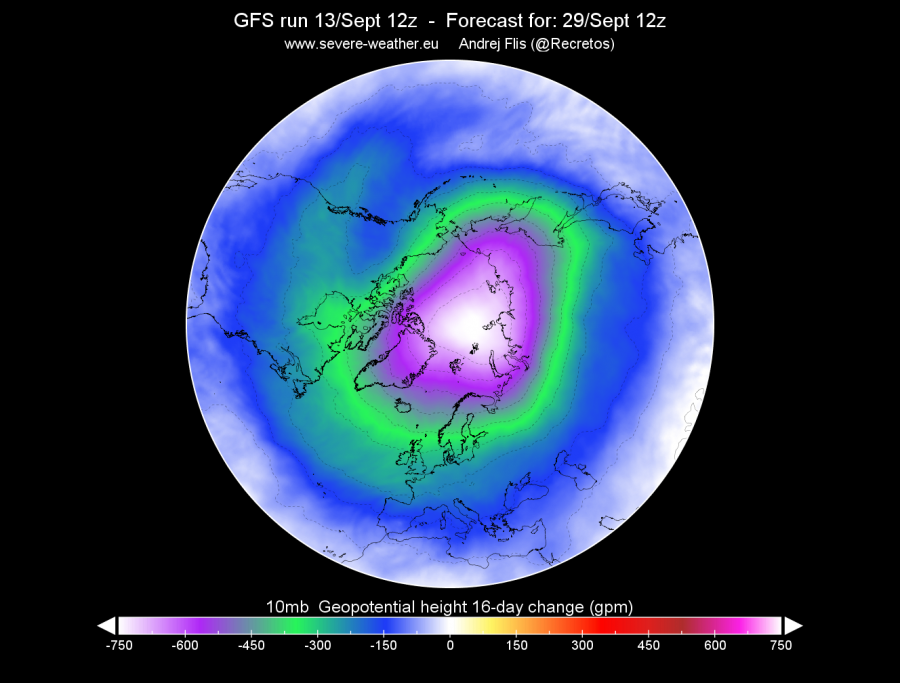 The temperature progression seen in the NOAA/CPC analysis so far is around average. Red line is 2018/2019. We can see the stratospheric warming event that took place in late December and early January. This graphs is for the 10mb/hPa pressure level (~30km altitude). The rest in grey is historic data since 1979. 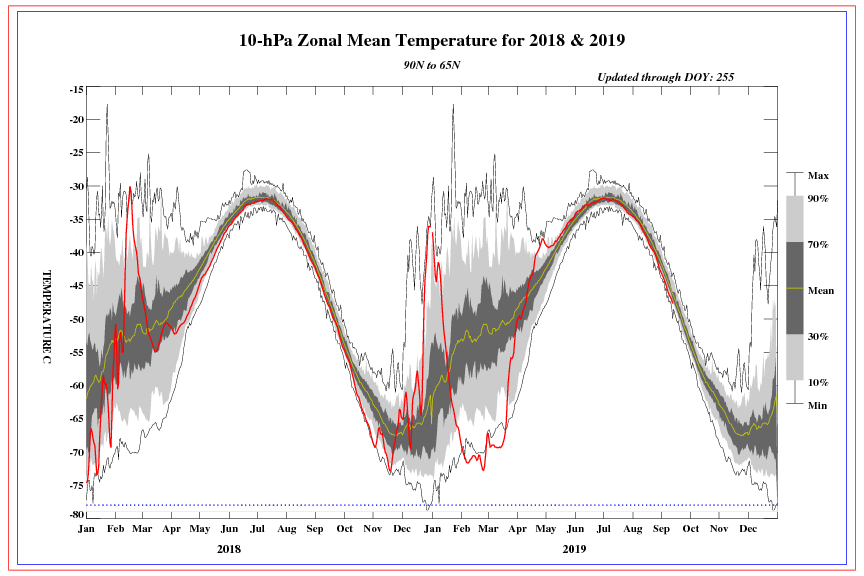 The polar vortex is highly connected with the Arctic Oscillation (AO) index. Positive phase of the AO means lower pressure over the pole and higher to the south, which brings warmer weather to Europe and North America. When the AO is negative, pressure over the pole is higher, which means that cold air is not locked into the pole and can move south into Europe or other regions in mid-latitudes. This index, and the NAO (North Atlantic Oscillation) index are usually the main atmospheric indices to monitor during winter. Current AO forecast does not show any special strength or coupling of the polar vortex, but when we head into October and November, we will be seeing more influence of the polar vortex on the AO forecasts.