Every winter, we often hear the term “polar vortex” in various media. Some call it a stratospheric hurricane, some call every winter storm a polar vortex and some even say it is a huge storm high above in the atmosphere. We are going to take a look at the actual polar vortex, what it really is and why are we so fascinated by it.

The atmosphere above us has many different layers. All of the clouds and the weather that we feel, happens in the lowest part of the atmosphere, called the troposphere. It reaches up to 8 km altitude over the poles and up to 14-16 km altitude over the equator. Above it, there is a much  deeper layer called the stratosphere. This layer is around 30 km deep and is very dry. The pressure on top of the stratosphere is 1000-times lower than on the ground. Unlike in the troposphere, the temperature in the stratosphere increases with height. At around 50 km where the temperature starts falling again with height, the stratosphere ends and the mesosphere slowly begins after the stratopause. Stratosphere is mostly known by the ozone layer it contains, which protects us from harmful effects of UV solar radiation. Over the south pole, we can find the infamous “ozone hole”, that appears every year in July and lasts till December. 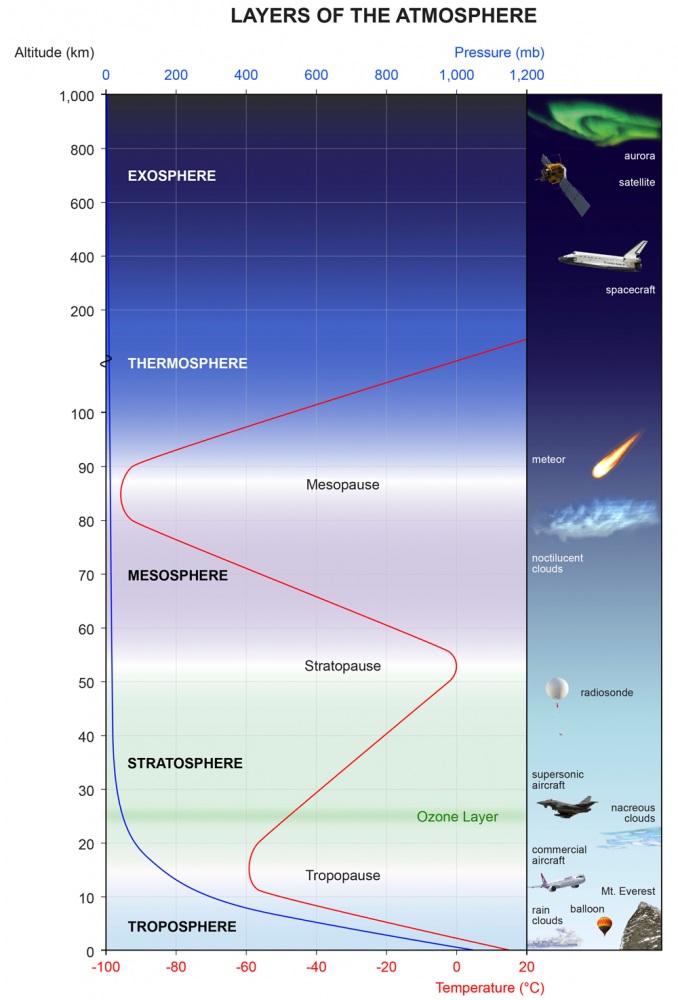 A diagram of the atmosphere from www.broadwaycomputers.us 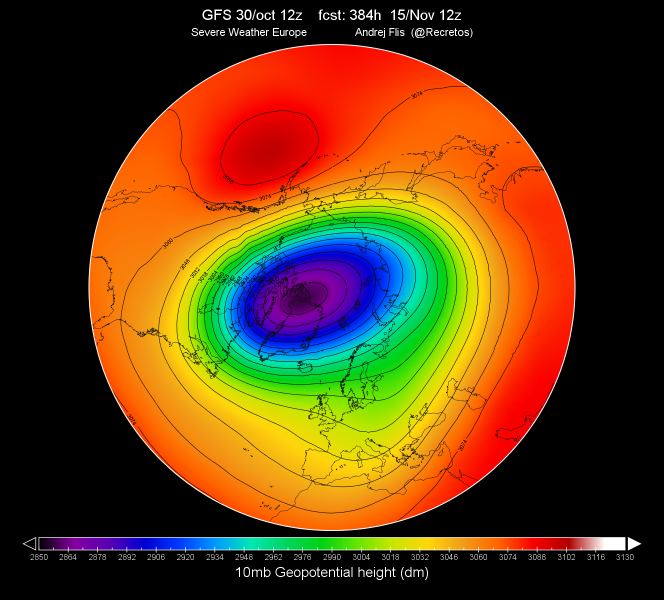 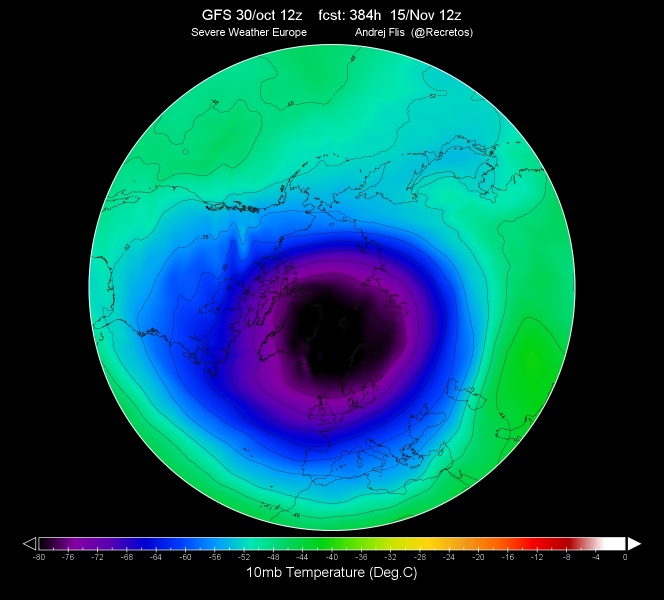 The difference between this giant cyclone in the stratosphere (from now on referred to as “polar vortex”) and the winter cyclones on the ground, is not just the size, but also that the stratospheric polar vortex has no fronts. It is in a barotropic environment. The whole process also creates another feature that is a part of the polar vortex. It is the stratospheric “polar night jet” or PNJ. It is kinda like the jet stream that we all know, but it is quite larger and is found at higher altitudes, being most powerful in mid winter in the middle and upper stratosphere. This PNJ is most often used to determine the strength of the polar vortex. Just like winds in a winter cyclone or a hurricane, the stronger/deeper the polar vortex gets, the stronger PNJ surrounds it. We usually look at the PNJ strength at 10 mb pressure level, which is in middle stratosphere, focusing on the 60°N latitude or 65°N latitude across the hemisphere. Both usages are okay, the difference is that 60°N is the older estimation system and 65°N is the newer one. 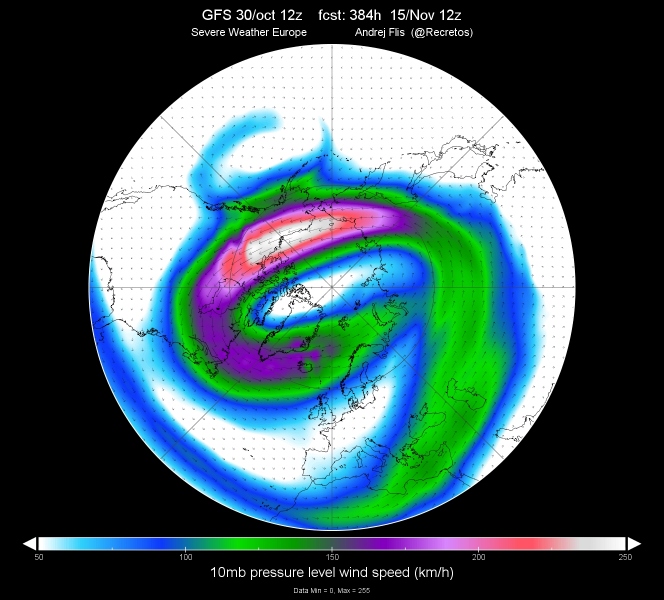 When looking at these high altitude winds, we use the “zonal mean”. In simple terms that means that we look at the average along the whole latitude line, or across the whole globe at one specific line. For example, a 60°N zonal mean, is the average along that whole latitude line from 0-360°E, across the globe. we use the “zonal wind” parameter. That is essentially a horizontal wind blowing from west to east (westerly), or blowing from east to west (easterly).  On the image below we can see an example of such graphic. We can see the strong polar night jet in the stratosphere over north hemisphere (30-85°N latitude). Negative values indicate easterly winds, or zonal reversal. We can see a similar stratospheric jet over the south pole. 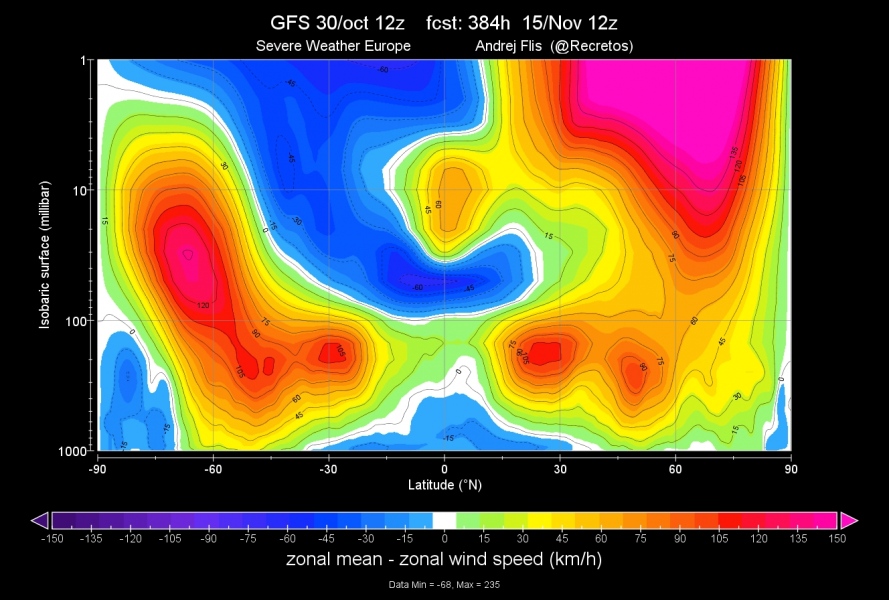 Why should we care?

The polar vortex in the stratosphere can have profound effects on the troposphere and our weather. It has a lot of cyclonic energy, and when strong enough, it connects down to the troposphere, amplifying the low pressure over the pole, and higher pressure further south, which causes more zonal type of weather, with positive NAO (North Atlantic Oscillation) and AO (Arctic Oscillation). Strong polar circulation and very low pressure over the north pole can lock the cold air in the Arctic regions up north. The weather in Europe and United States is generally mild or warm in this mode. We also monitor this by the progression of temperature and geopotential height anomalies. On the first image below, we have the geopotential height anomaly in the troposphere below and the stratosphere above the 100-150 mb level. Negative anomalies indicate lower pressure and positive anomaly indicates higher pressure and ridging. We can see that this year in October the lower pressure was slowly dropping down from the stratosphere, trying to make a full connection with the troposphere. But it has not fully connected yet, since the troposphere has higher than-normal pressure as seen on the chart, which prevents the tropospheric polar vortex to fully organise for now. The tropospheric and stratospheric polar vortex are always connected, and have a varying influence on each other. It is a very complex system, where changes in one part can cause changes in the other and then back again. It is a very complex “feedback loop”. 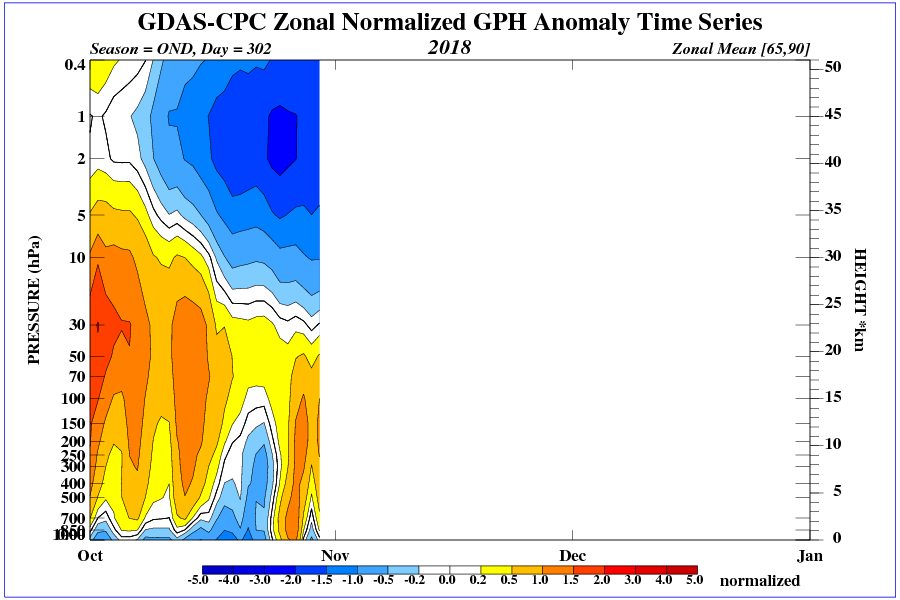 Geopotential height anomaly by height and time over the north pole. Graphic from NOAA 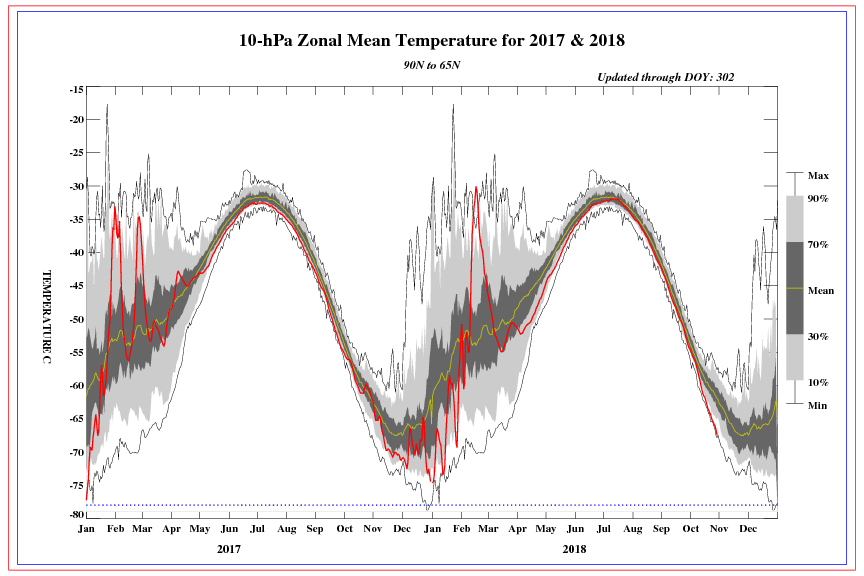 Temperature progression over time above the north pole. Graphic from NOAA

The stratospheric polar vortex has its counterpart in our troposphere aswell. We can usually see it on the most-often used weather map, the 500mb geopotential height. Unlike the near-circle shape that we can see in the charts of the stratospheric polar vortex above, we have a very dynamic and wavy tropospheric polar vortex. The troposphere is where the atmosphere interacts with the ground and its complex terrain and many high mountain ranges. It causes lots of different dynamics, not to mention all the frontal development and tropical dynamics. It is one very complicated system. On the large graphic below, you can see the polar vortex at different layers of the atmosphere. The higher we go, the more perfect shape we can see, since there is less interaction with the terrain and other complex disturbances. The waves that we see in the troposphere are called Rossby waves.

The shape of the polar vortex at different layers in the troposphere/stratosphere from GFS analysis. Produced by Andrej Flis (@Recretos)

Sometimes, all these “waves” (Rossby waves) in the troposphere can be strong enough to send disturbances and energy vertical up into the stratosphere. That can cause pressure to rise in the stratosphere and increases the temperature. If the disturbances are strong enough, a very strong and important event can occur, called the “Sudden Stratospheric Warming” or SSW for short. It is exactly what the name suggest. It is a fast warming event in the stratosphere. What it causes is it disrupts the polar vortex and it can displace the polar vortex, or it can actually split it apart on two or more pieces. To have such even officially recognised, the stratospheric jet stream at 10mb level needs to be reversed at 60-65°N latitude, as we were reading previously above. Below we have two images, the same as previously seen above, showing how an SSW event looks like. In the first one we can see the sharp temperature rise in the middle stratosphere, and on the second image we can see the geopotential height anomaly  over time. It is nicely seen how the higher pressure slowly made its way lower down into the troposphere, where it has caused higher pressure over the north pole, which has enabled cold air to move further south, bringing cold air and snow to Europe in January, February and even in March 2013. These SSW events do not happen every winter, but when they do, they can potentially have a major impact around the whole hemisphere.

Temperature progression of middle stratosphere in 2012/2013 showing the sharp temperature rise of the SSW event. Map by CPC/NOAA 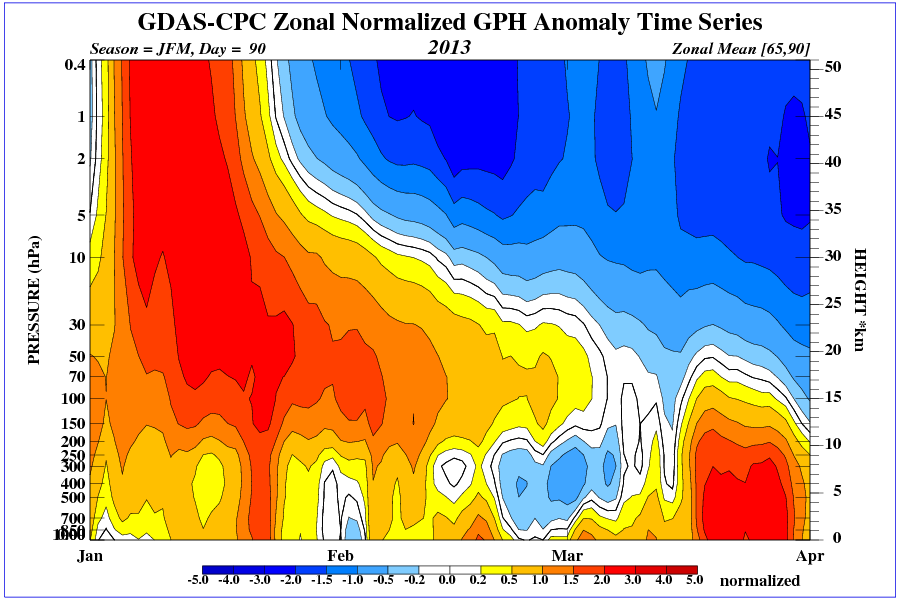 Geopotential height anomaly by height, of the 2012/2013 SSW event. Map by CPC/NOAA

As we have said, the tropospheric waves influence the stratosphere, and can cause the disruption of the polar vortex. That can then have a strong effect back down on the troposphere, bringing us cold air and snow and more tropospheric waves, and the cycle repeats. Isn’t meteorology fun?
Usually we can have the SSW event impacting our weather in a few days, and sometimes in a few weeks. It all depends on the state of the troposphere and how dynamic it is. Sometimes, SSW events can bring cold weather and lots of snow to one region only, like United States or east Asia, sometimes they can affect the entire hemisphere and sometimes they have no important effect at all. There are a lot of dynamics and complicated processes to consider. The animation below from NASA, shows the 2012/2013 SSW event (officially marked on January 6th) and polar vortex disruption in the upper stratosphere at 7mb level. Essentially it is like tearing apart a large cyclone. This animation shows really nicely how the atmosphere actually behaves identically to a liquid. We can see very obvious fluid dynamics.

The following animation is my personal work, showing the strong SSW event in January 2009. We can see the stratospheric polar vortex in 3D and we can see its disruption and splitting on two very weak parts.

The graphic below shows the pressure anomaly after the SSW event in January 2013. We can see high pressure over the north pole, and low pressure and cold air further south over Europe, Asia, USA and Atlantic.

Usually an SSW event does not happen just all of a sudden, but is usually a chain of events. There can be many smaller disturbances in the stratosphere before the major event happens. Those smaller disturbances can help keep the polar vortex weaker and prevent it from fully strengthening, so it is ready to be fully disrupted later with a stronger disturbance.