Early December starts with much warmer weather than normal for a large part of Europe and this week should remain mostly warm for many regions. Then, a significant pattern change and an Arctic outbreak becomes increasingly likely early next week when strong meridional flow establishes across Europe and Arctic cold airmass begins advecting from northern towards southern Europe and the Mediterranean. Winter weather with locally large amounts of snow will return.

A deep trough with its associated frontal system pushes across north-central Europe, resulting in strong warm advection spreading across eastern half of Europe as well as central Europe and the Balkan peninsula where very cold weather has been in place since late November. The cold airmass behind the cold front spreads into western Europe. With persisting and even strengthening upper ridge over the SW Europe and Mediterranean, very warm airmass remains over the Iberian peninsula and western Mediterranean. Very cold airmass remains over the far N Altantic and Iceland where daily temperatures should remain below -10 °C in many regions. 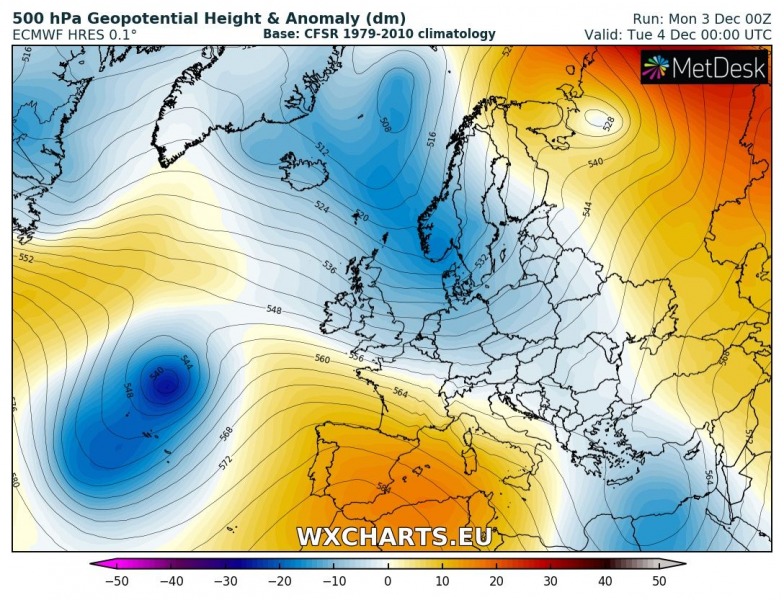 The north European trough continues towards NE Europe and across eastern Europe, resulting in colder airmass spreading behind it into central Europe and towards the Balkan peninsula. Ahead of the trough, very warm airmass advection pushes into NW Russia and far north into the Arctic region. The upper ridge over the SW Europe strengthens and a very warm day is expected for Iberia and S France. Extremely cold temperatures remain over Iceland. 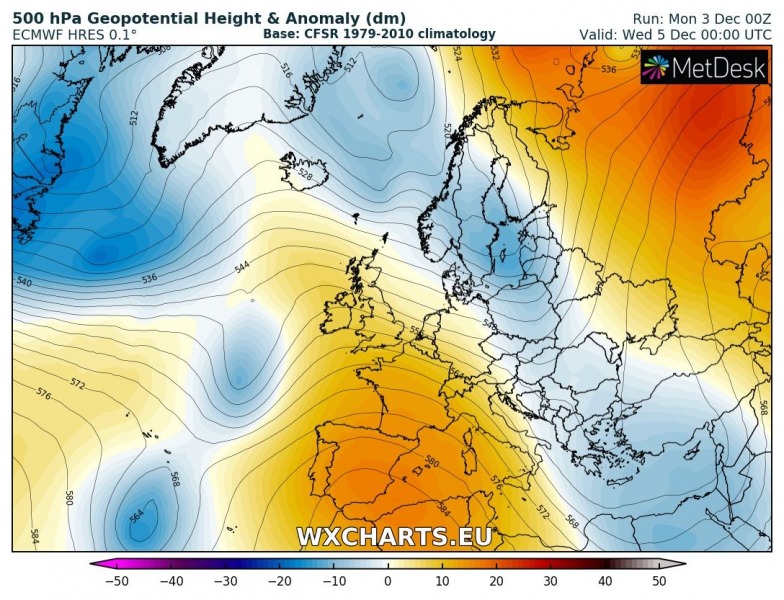 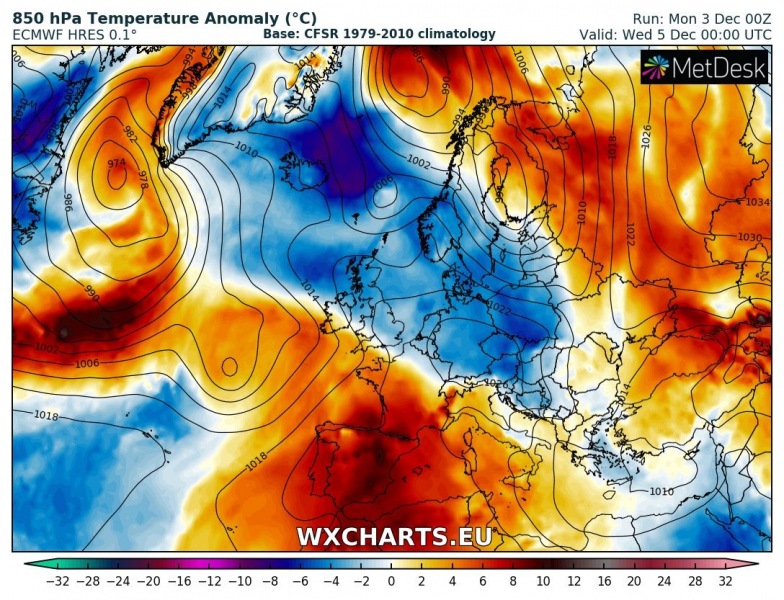 The upper trough over N Europe gradually weakens while cold airmass behind the front spreads across much of the Balkan peninsula. Meanwhile, a strengthening ridge from south into central Europe, combined with strong zonal flow from the Atlantic, results is a new significant warm advection across the western Europe and towards the central Europe. Very warm weather remains over Iberia.

The upper trough over north Europe moves more into the Arctics while a deep trough develops over the northern Atlantic. Together with the strong ridge over SW Europe, it establishes powerful zonal flow into western and central Europe, very warm airmass pushes across France, Benelux, Germany and the Alps, as well as Iberia. The upper low over the Balkan peninsula pushes into SE Europe and very cold airmass brings snow into the Black Sea region and Turkey – sea-effect snowfall is likely as well for N Turkey.

A deep north Atlantic trough and cyclone push into western Europe and towards Scandinavia, with an associated cold front advancing into the central Europe. Very warm airmass advection takes place ahead of the cyclone across NE Europe, while colder airmass spreads behind the cyclone into the western Europe. Very cold weather remains over the Black Sea and Turkey.

The large trough splits into two large upper lows: the southern one moves into the north-central Mediterranean and the Balkan peninsula with the associated cold front pushed far south across Italy and towards Greece. An upper ridge and warm weather remain over Iberia.

A large trough with several upper lows dominates east-central Europe while an upper ridge expands from SW Europe into the northern Atlantic as well. This shuts down the zonal flow and establishes meridional flow from the Arctic region towards south. Very cold airmass spreads towards the western Europe and begins an Arctic outbreak event.

Stay tuned for more details in the coming days – including on separate weather systems rolling across our continent.