Let’s take a look over the weekly pattern through the first days of the new year 2020. Early January will continue with ridging pattern in the majority, as two upper-level blocking/surface high-pressure systems will favor stable weather across much of our continent, except the far SE parts and far northern parts. Another upper low will bring lots of snow into Turkey on Thursday while intense cyclones will develop severe windstorms over far northern Scandinavia.

Attached are the 500 mbar heights, 850 mbar and 2 m temperature anomalies and mean sea-level pressure through the first days of January, let’s get into details:

The first day of 2020 starts with a powerful upper-level ridge dominating much of our continent, while an upper low is weakening across the far eastern Mediterranean. Over the North Atlantic, a trough is resulting in an intense extra-tropical surface cyclone. Much of Europe will be experiencing above-normal temperatures, especially across the west and north Europe with a strongly positive anomaly locally – more than 12 °C warmer than normal. Note than 2 m temperatures will be lower in some areas where strong thermal inversions form. Some cold air will remain over the Balkans, the Black Sea region and south-east Mediterranean in the wake of the decaying upper low. 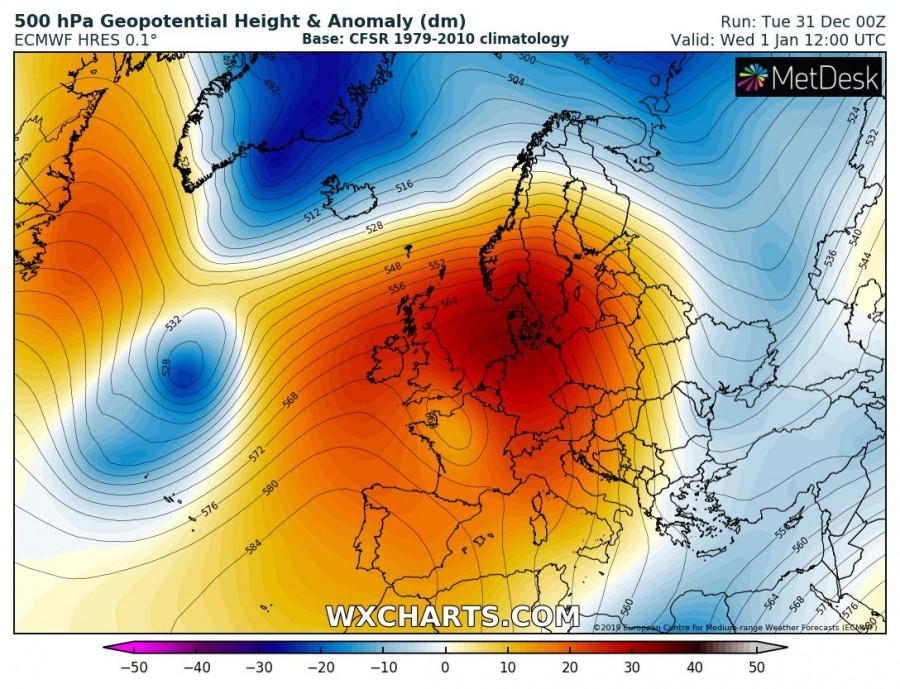 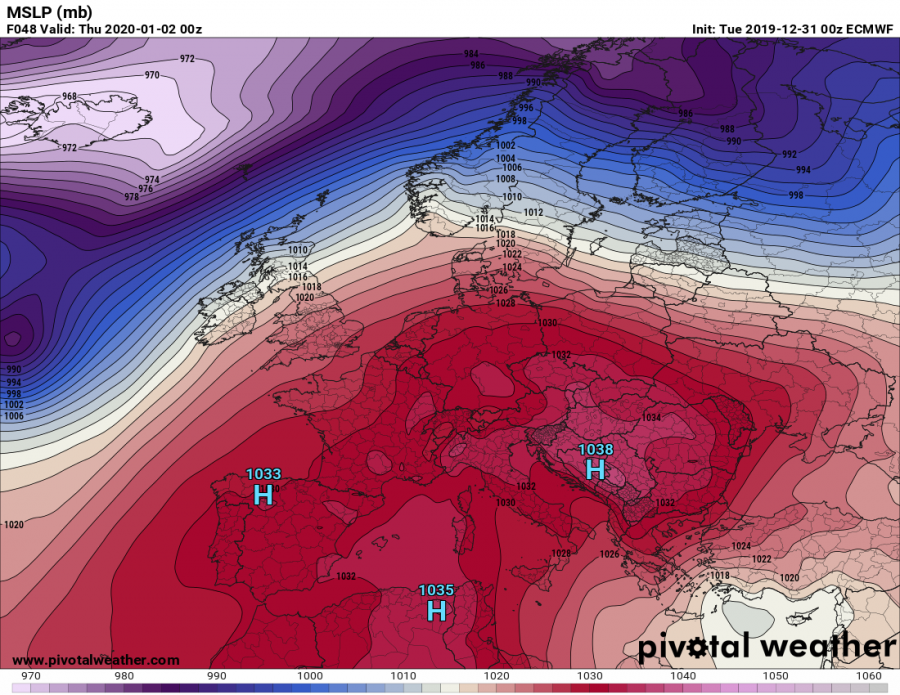 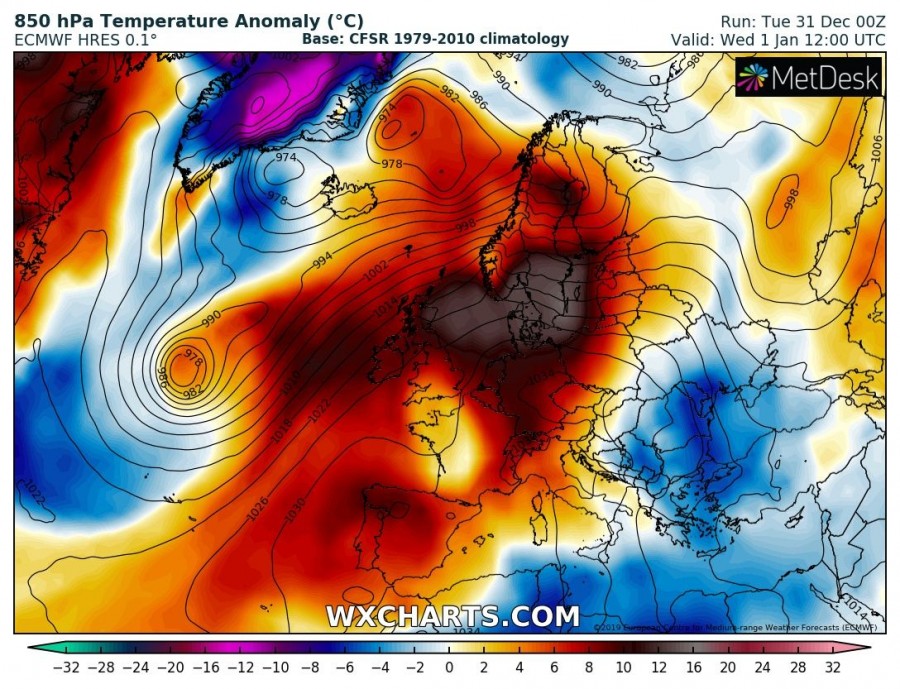 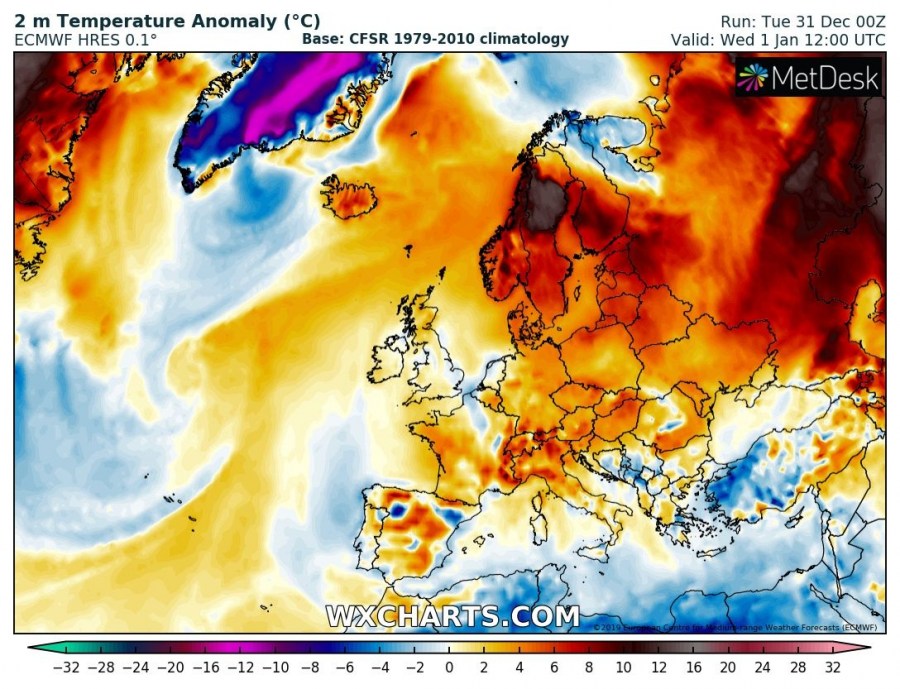 Thursday brings a similar pattern across the European continent as the day before, but with some minor differences. As the ridge progresses more east into eastern Europe and the Baltic region, the upper trough / low over the far southeast Europe re-strengthens again. This develops a new secondary low over the far east Mediterranean, resulting in a new excessive snowfall event over Turkey. The North Atlantic trough significantly deepens while moving towards Iceland and Greenland, resulting in an intense deep cyclone towards the Norwegian Sea. The temperature picture reveals some outstanding and extreme anomalies across parts of Scandinavia and the Baltic region, locally reaching more than 20 °C warmer 850 mbar level temperature than normal! The cold advection over the Black Sea region and Turkey strengthens. An Arctic outbreak pushes from Greenland into the North Atlantic. 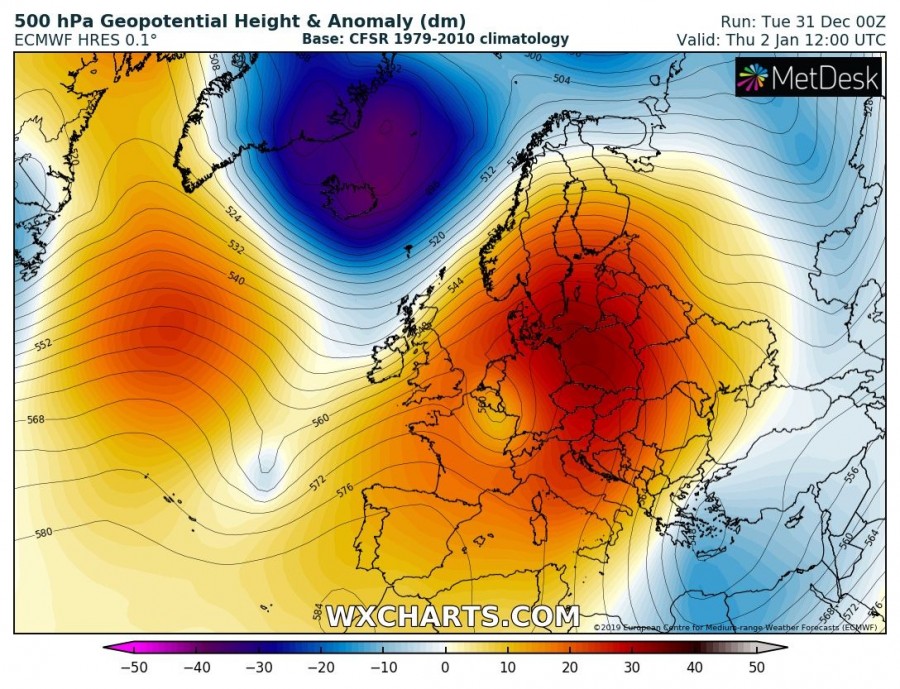 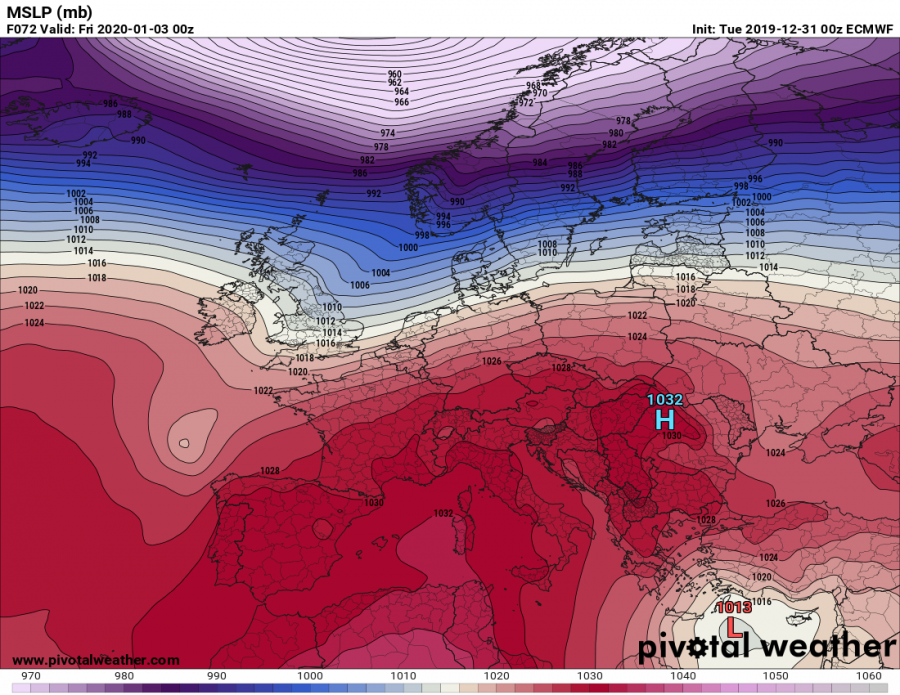 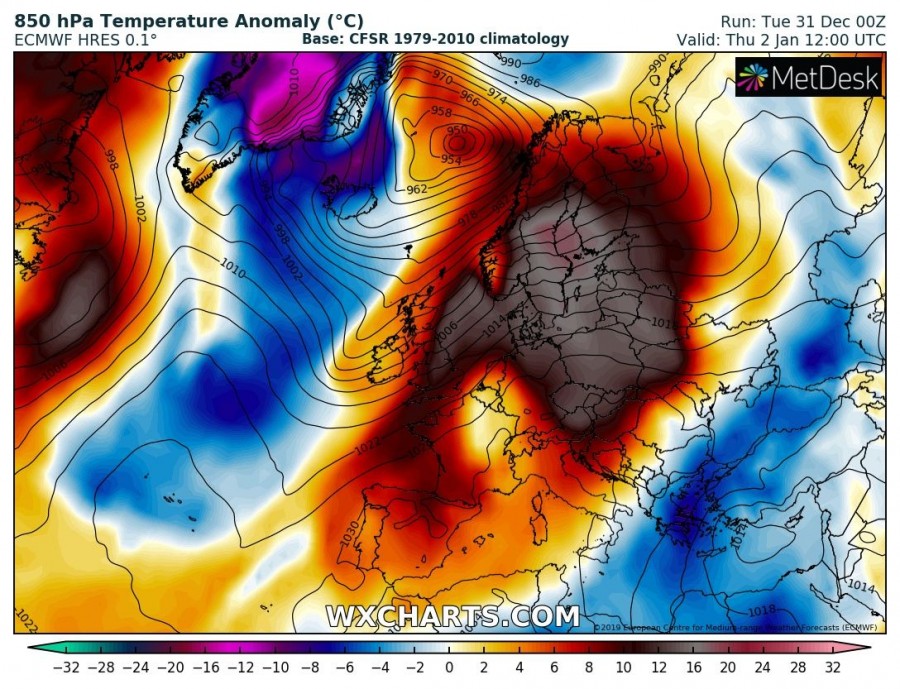 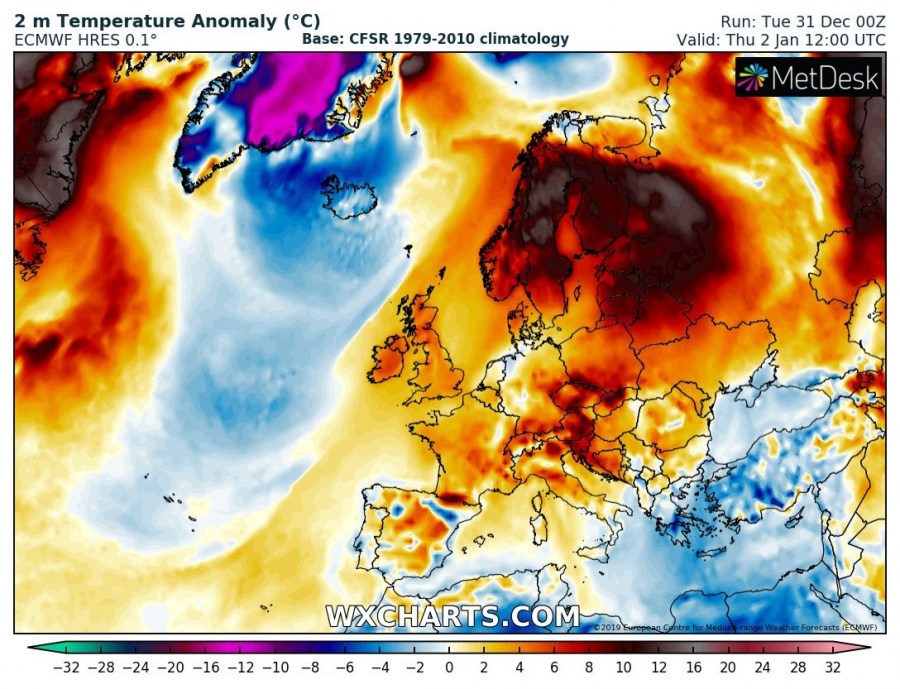 On Friday, an upper-level ridge over Europe splits while a new upper-level ridge develops over the North Atlantic. This favors the very deep trough/low over the Norwegian Sea to deepen even more and extending more equatorward. Arctic air mass moves across Iceland. The associated surface cyclone spreads into Scandinavia, delivering very low pressure and severe winter storm into the region. Intense windstorm continue battering Norwegian coast. While the strengthening North Atlantic ridge brings some colder air into the western Europe, an extreme temperature anomaly continues over Baltic region and spreading into NW Russia. A shallow upper low and an associated surface low over the eastern Mediterranean and Turkey gradually weaken during the day, but still delivers snow into parts of Turkey and the Middle East. 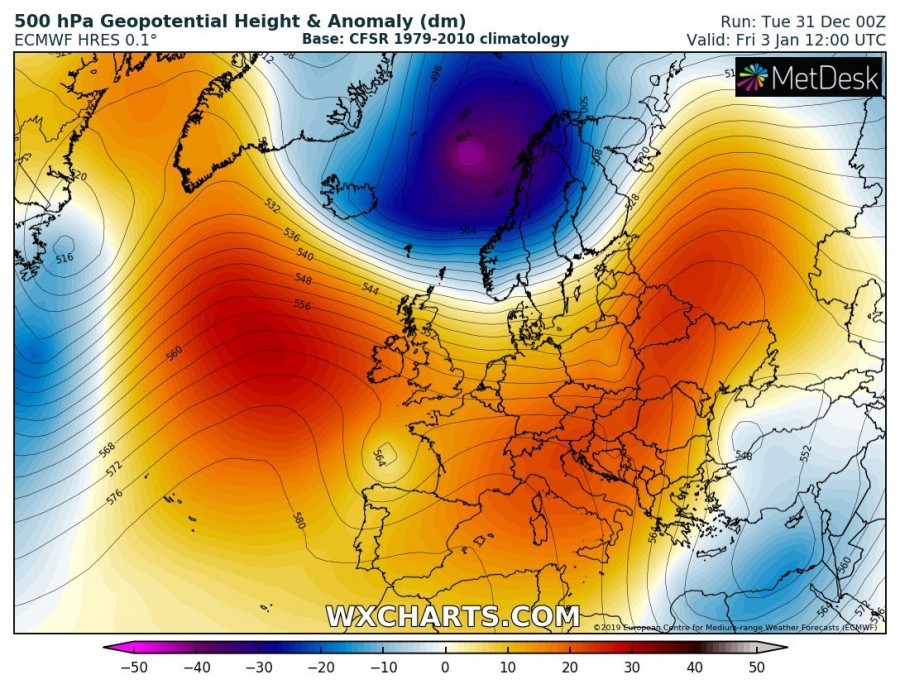 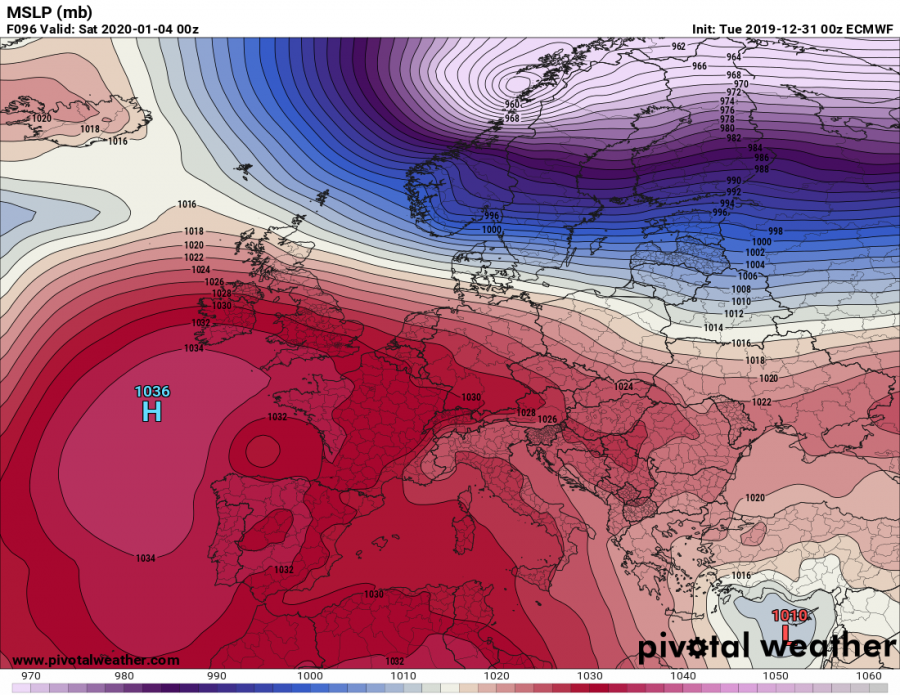 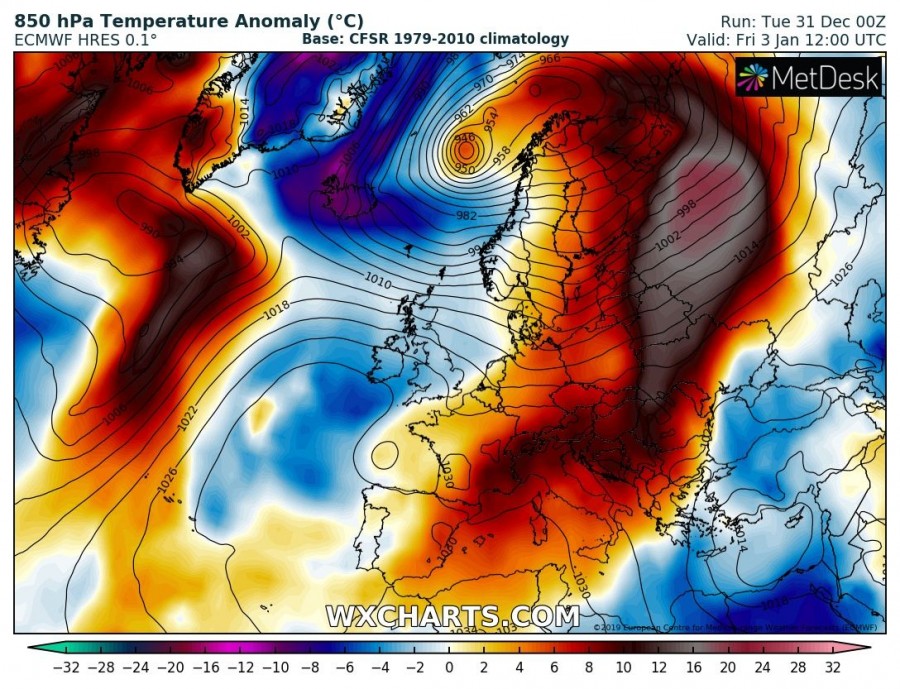 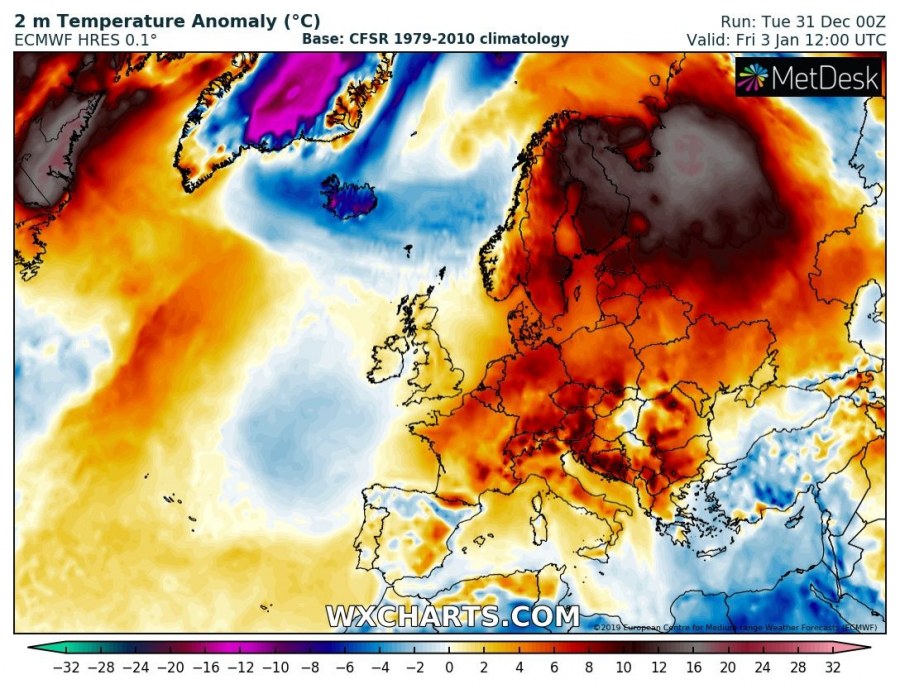 The strengthening upper-level ridge over the North Atlantic expands into western Europe while a large deep trough over the Arctic region drifts more ESE towards the Baltic region and NW Russia. This finally flushes away the incredible warmth and bring at least some lower temperatures. A new trough forming over the Labrador Sea starts new surface cyclogenesis south of Greenland and strong warm advection spreads towards Iceland. Warmer air mass also spreads towards western Europe. The Arctic airmass from the day before moves towards the Norwegian Sea. The rest of Europe experiences near or slightly above normal temperatures and mostly stable weather. The weak upper low remains over the far east Mediterranean and delivers unstable weather for another day. It also brings some additional snow across the Middle East. 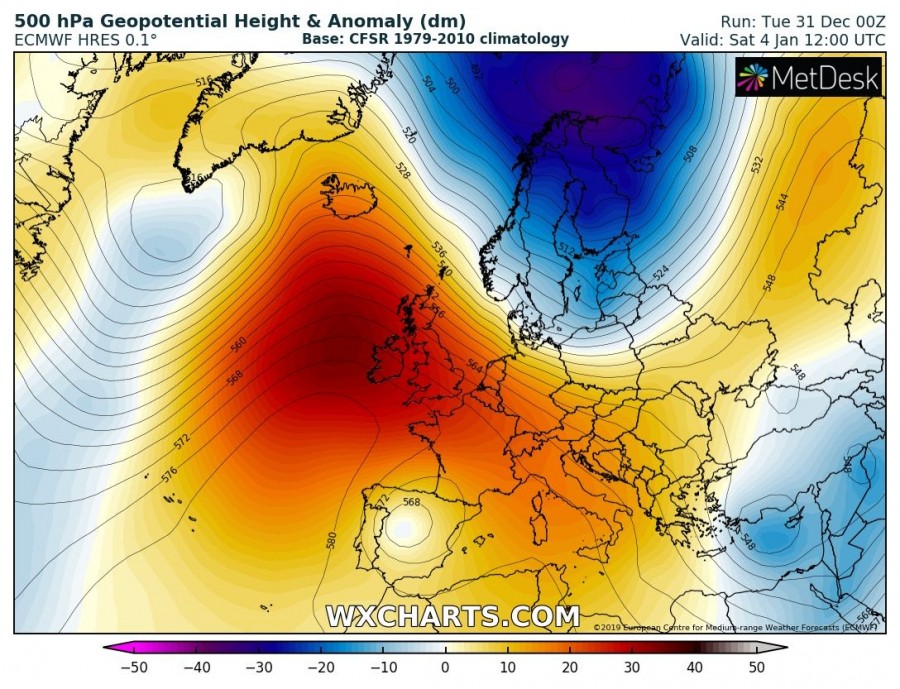 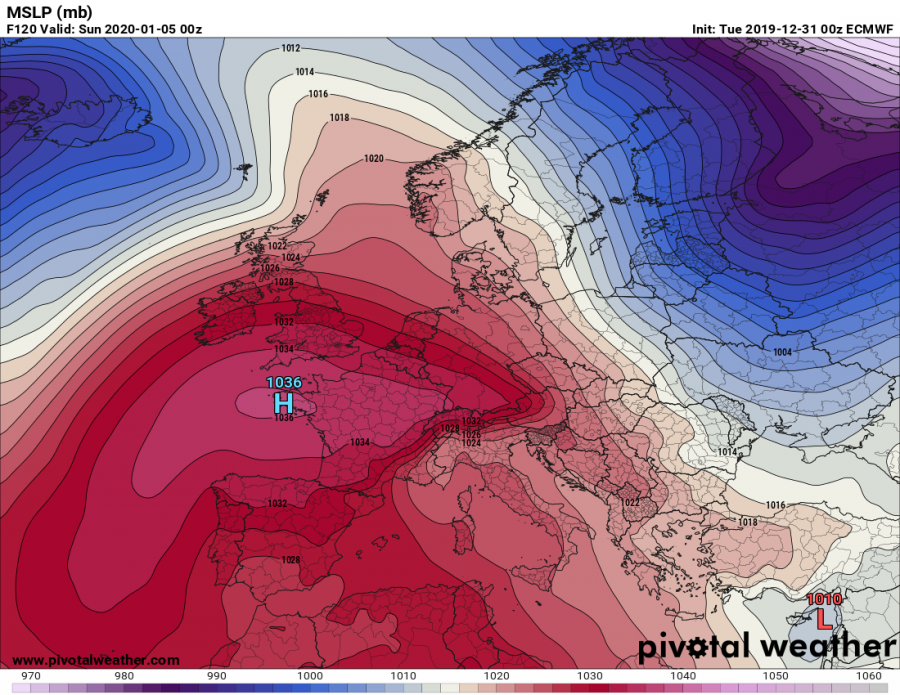 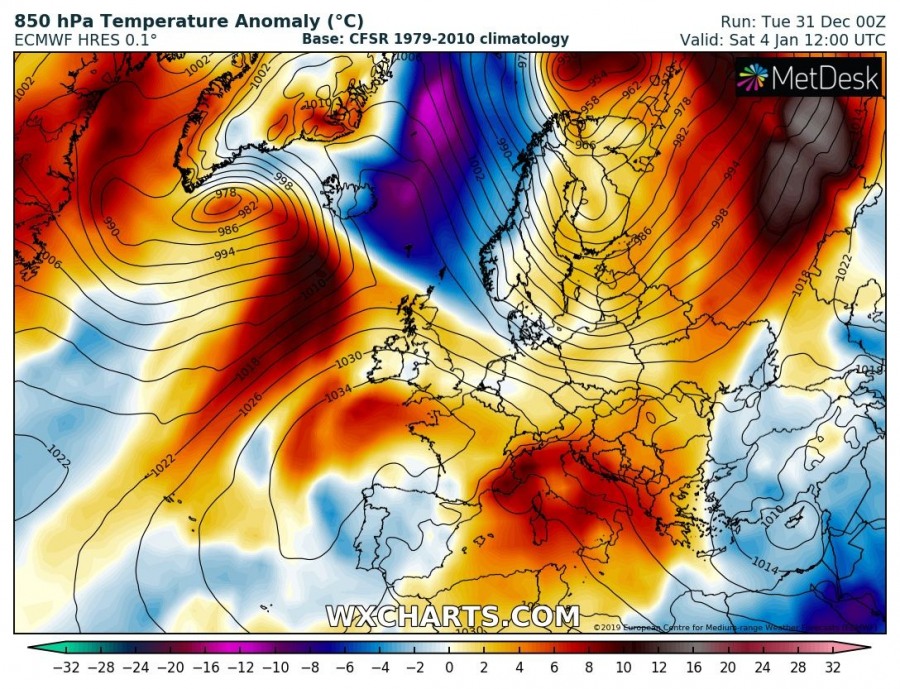 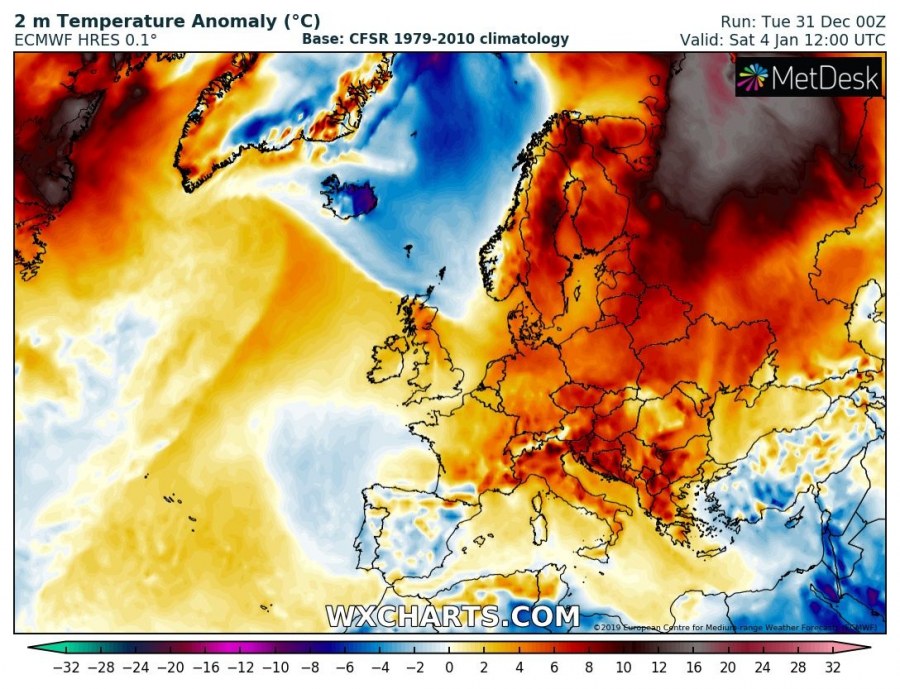 At the end of the weekend, upper-level ridge dominates east-central and SW Europe, also gradually expanding into Scandinavia. Along its eastern flank, a deepening trough pushes across eastern Europe towards the Black Sea and results in colder temperatures from Scandinavia towards southeast Europe. Warm air mass remains across south-central Europe and the western Europe. A small upper-low develops over the southern Iberia, bringing some rainy weather and cooler temperatures into the region as well. The new upper-level trough over the NW Atlantic spreads into Greenland and Iceland with an associated deepening surface cyclone. 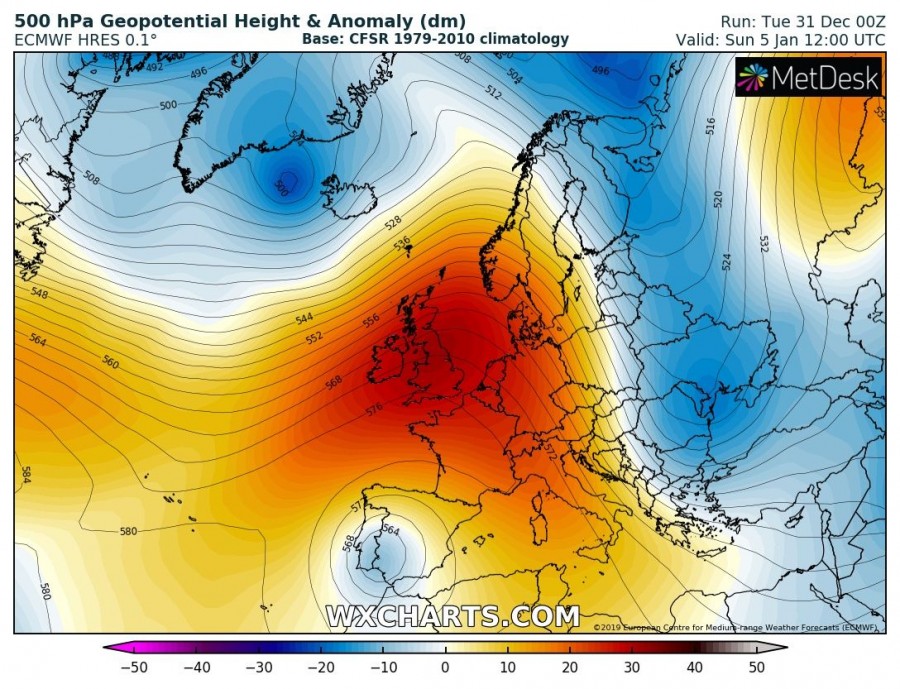 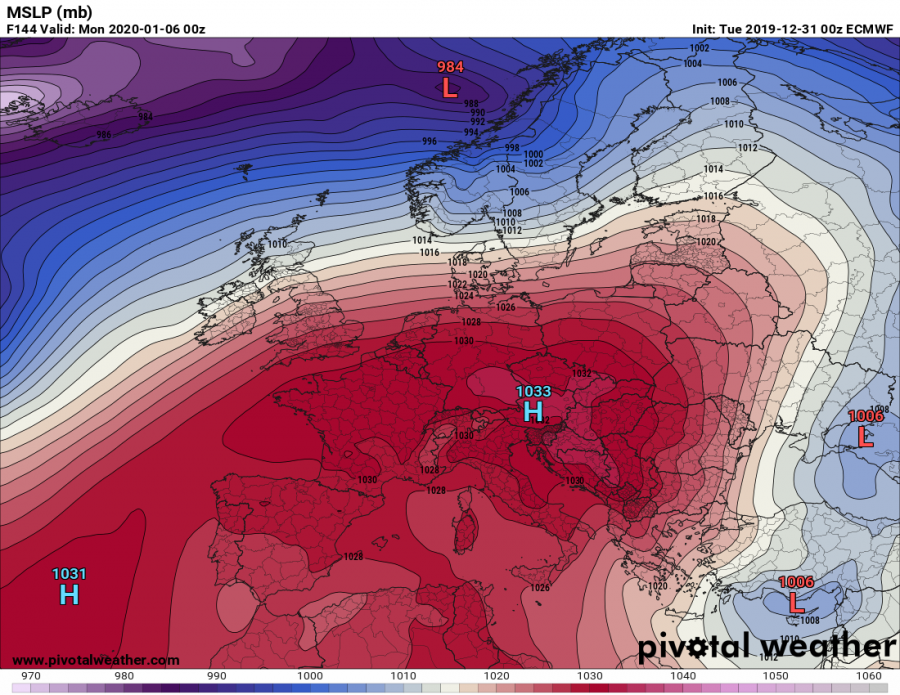 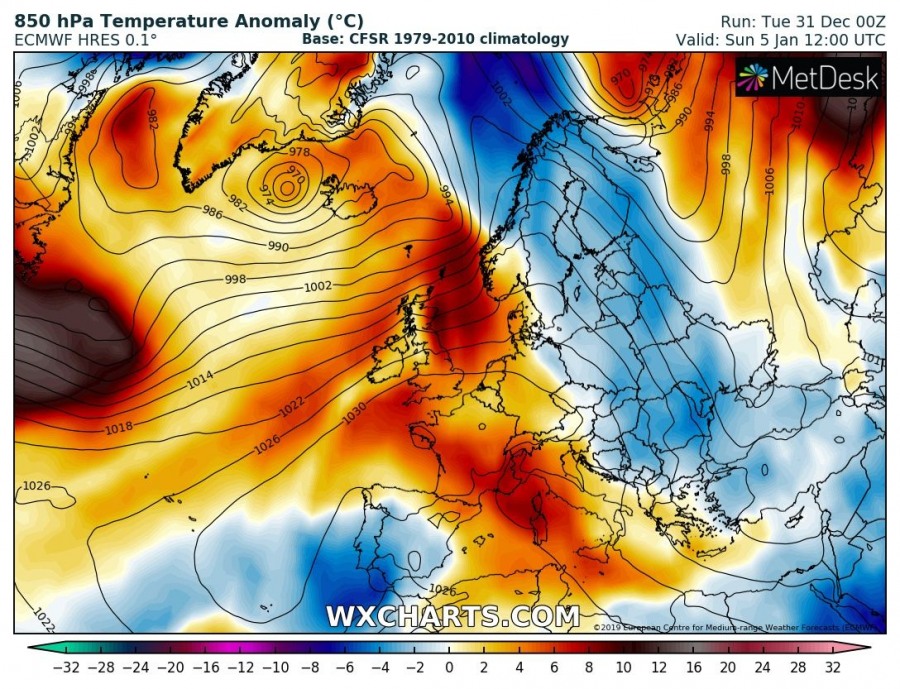 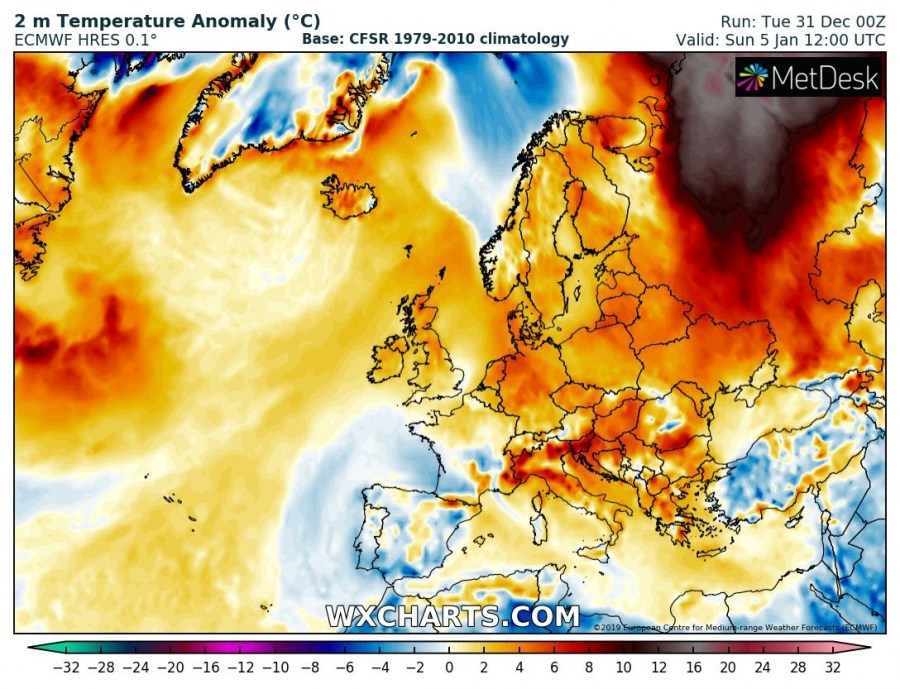 And for the end, here is the close-up view of the impressive 850 mbar and 2 m temperature anomalies across Scandinavia, the Baltic region and NW Russia through January 2nd and 3rd. A broad area will experience an exceptional temperature anomaly of 16 to more than 20 °C warmer 850 mbar (approx. 1500 m ASL) temperature than normal for early January, while also the near-surface temperatures will be 10-16 °C warmer than usually. Around +10 °C is again likely from Denmark to Estonia in the afternoon. This anomaly is EXTREME! 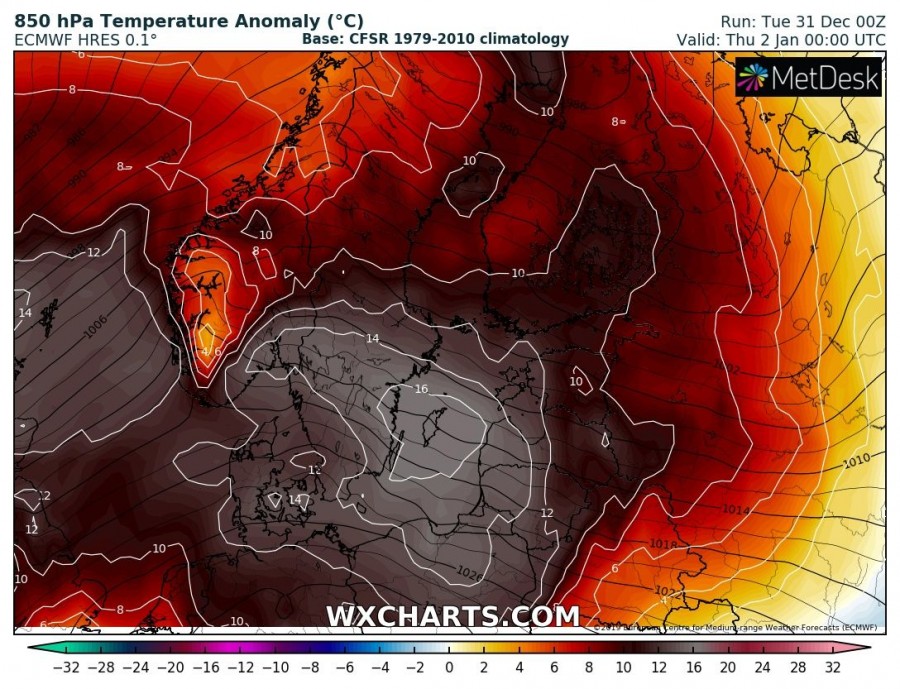 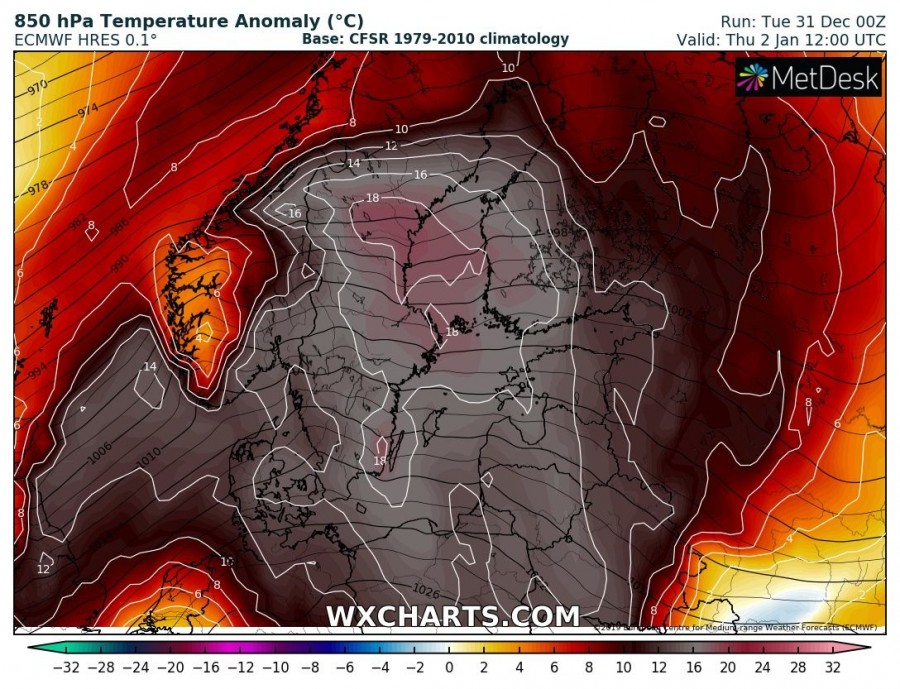 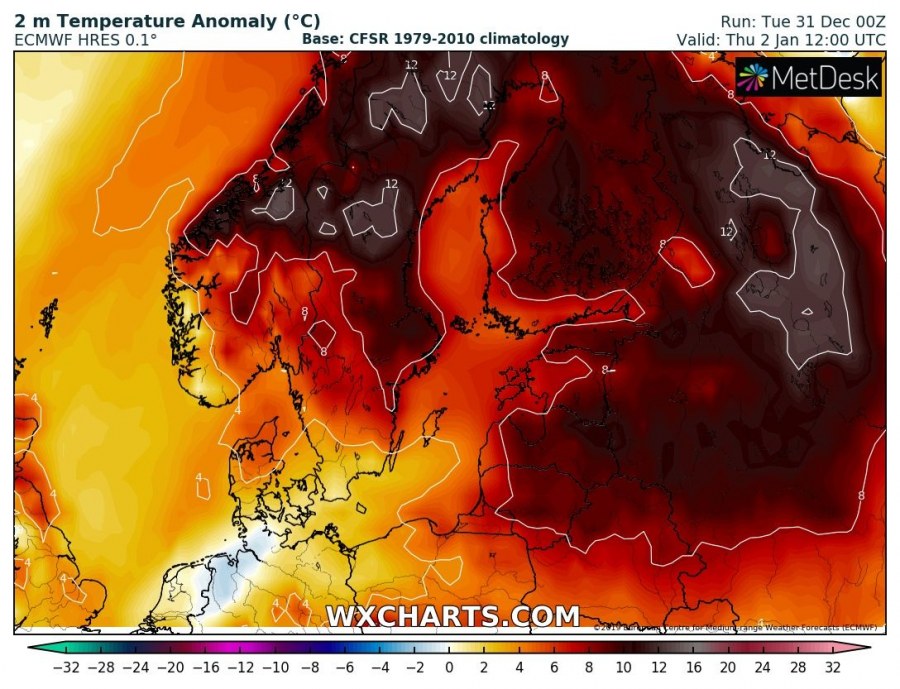 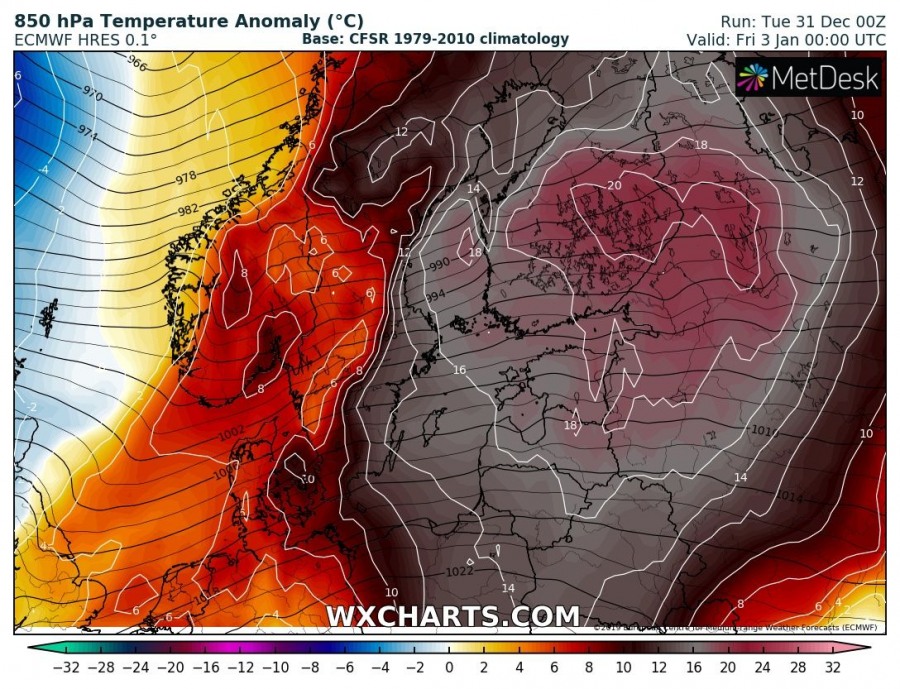 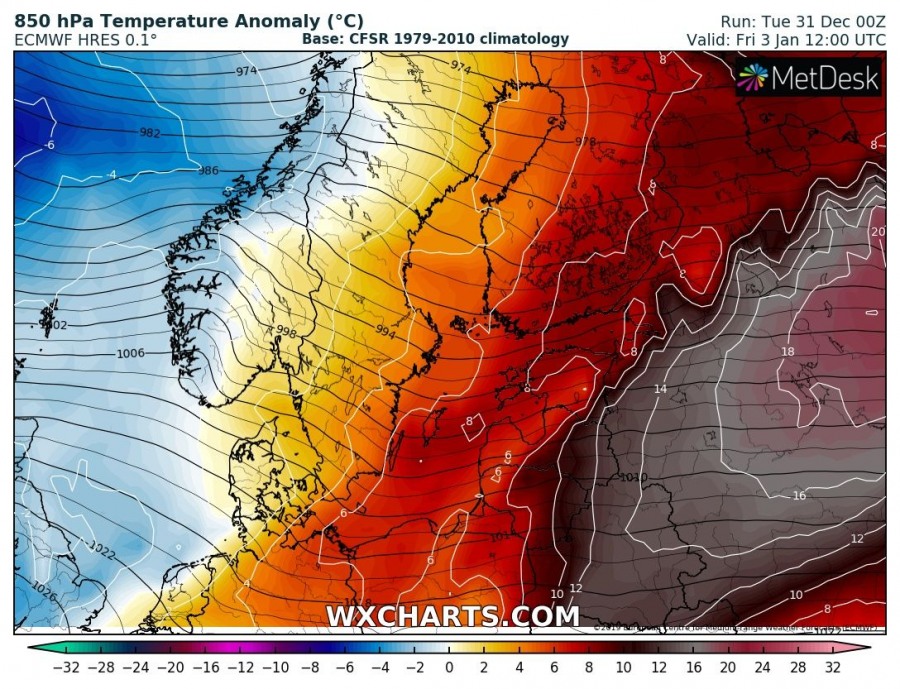 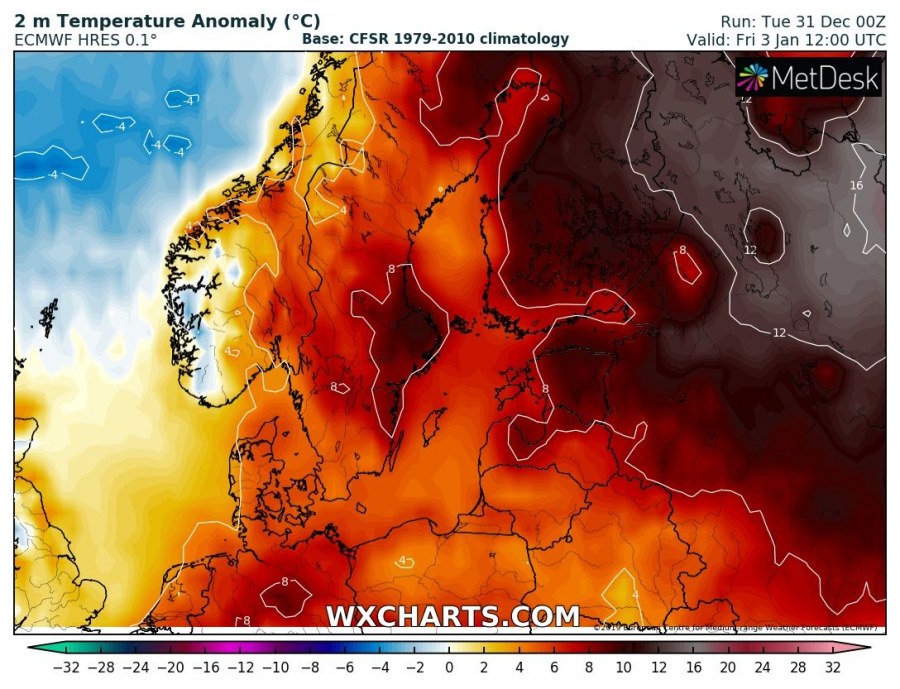 Apparently we will start the second winter month with an exceptional temperature anomaly across some parts of Europe. The overall trends for January are, however, not leaning towards more wintery weather anytime soon. We will continue monitoring the evolution and will keep you updated!

In the meanwhile, take a look at our long-range outlook:

Severe Weather Europe team wishes you all the best in the New Year! Hopefully it brings us a lot of photogenic weather and enjoyment of mother nature! We greatly appreciate your continued support through all these years and will be honored to have you all with us in 2020 again!