In our previous installment, we looked at the long-range forecasts and seasonal trends. Now we will focus more on the medium/extended range, and what the early days of 2020 will bring.

A few days ago, we had a look at the latest long-range/monthly forecasts. We have discovered, that they are all locked in, for a very specific global circulation pattern in the next 40-60 days:

Looking at a shorter range of 10-20 days, we can now see this exact specific weather pattern emerging in the forecasts. There are 3 main features to look out for. First, we have the strong high-pressure area in the North Pacific. That is one of the key players in the upcoming global pattern setup. That tends to promote northerly airflow over North America into the United States, mainly western and northern parts. The image below shows the weather pressure anomalies in the 11+ day range.

The obvious second feature, is the positive pressure anomaly over the European sector. We have already observed this anomaly on several occasions in December and is currently set to dominate over Europe. The forecasts currently show this high-pressure area to develop into a persistent feature, promoting milder conditions across much of western and northern Europe, pretty much a stark contrast to the United States. The image below shows the north Hemisphere pressure anomaly forecast for day 15, with the obvious two high-pressure poles over the North Pacific and Europe. 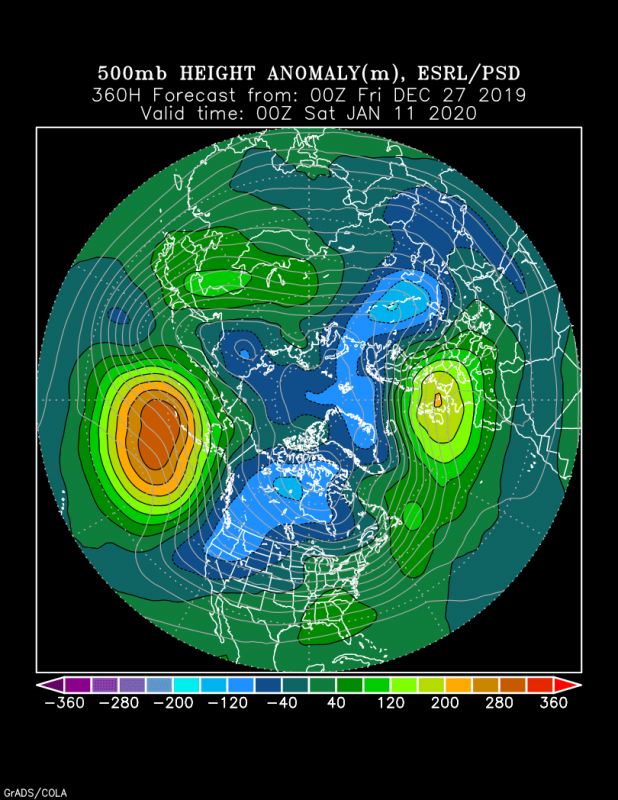 The third main feature is the area in-between these high-pressure poles. That is the low-pressure area over the North Atlantic and Canada/Greenland sector. This low-pressure area is associated with the strong polar vortex and is causing an amplification of the polar jet stream and the polar circulation. This is also now becoming a permanent feature and will help to lock down this pattern for the days to come. Such weather pattern, when we have a strong low-pressure area over the pole, surrounded by high-pressure areas in the mid-latitudes, is a typical example of a positive Arctic Oscillation (AO) & North Atlantic Oscillation (NAO). The image below shows the comparison of the weather pattern during positive and negative phases, and we can see that we are getting into a classical positive AO/NAO combo. 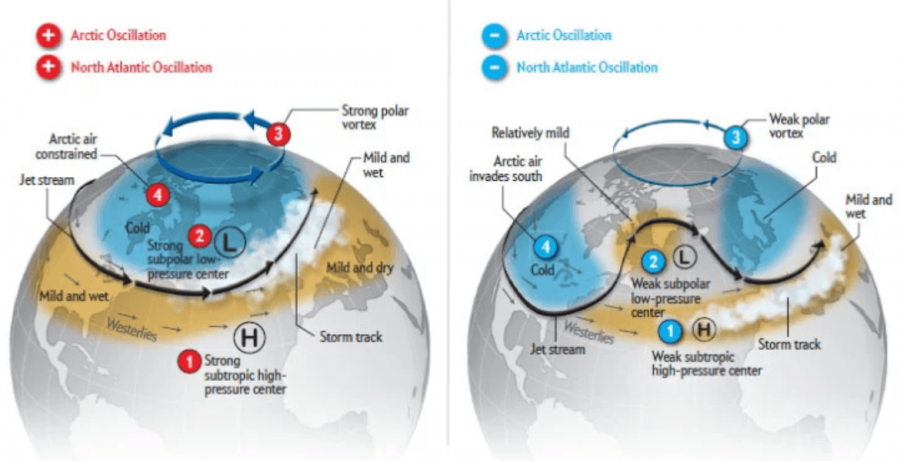 The AO&NAO forecasts also show the upcoming positive phase. Especially the positive AO phase is looking to be quite strong. This is to be expected, given the pressure anomalies that are currently setting up for the new year. 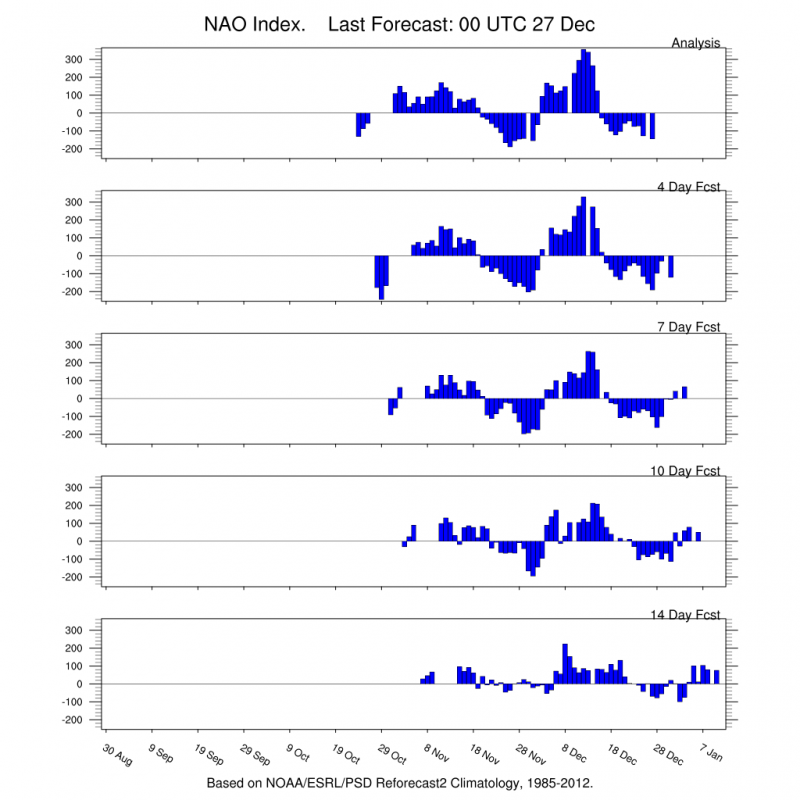 The ensemble forecast for the first half of January from NOAA/PSD indicates this exact pressure pattern, and also the positive temperature anomalies over Eurasia, indicating a pretty weak winter for now over those parts, while North America and the United States have a better chance of more wintery weather. 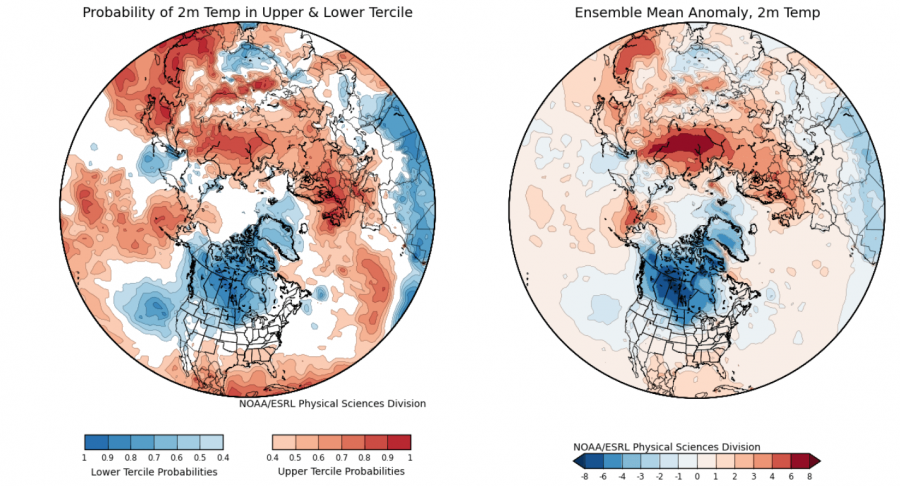 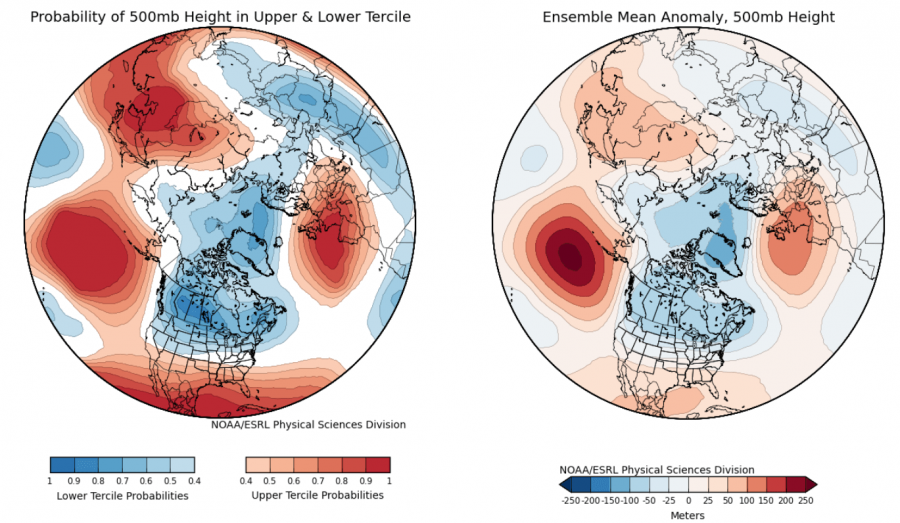 This is all reflected in the pressure forecasts, and of course in the temperature forecast. The CFSv2 weekly forecast shows this exact pressure pattern dominating in the first half of January. This is a textbook example of a “tri-pole” pattern of high pressure in the North Pacific, then low pressure over the North Pole, and again high pressure on the other side of the planet, over Europe. 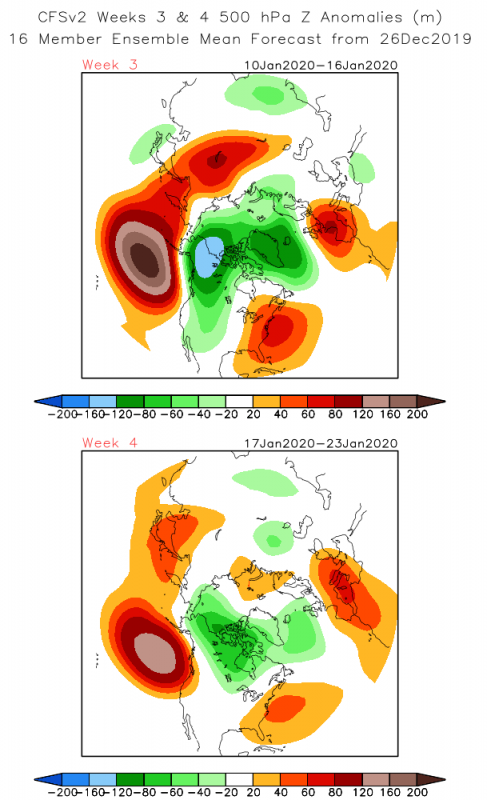 Such weather pattern usually tends to lock out the cold polar air into the North pole and the Canadian sector, due to stronger polar circulation. This means that there is a much higher chance that we can see a cold air outbreak into the United States as opposed to Europe. The cold air in the Canadian sector acts as a source region for cold arctic air masses. Since there is a high-pressure area in the North Pacific, that means more northerly flow over the continent and an easier transport of colder air into the Continental United States. The high pressure over Europe helps to amplify the westerly winds from the Atlantic into the European sector. That transports warm air and prevents cold air outbreaks over much of the continent. There is still a chance for colder temperatures over Europe, during a passing/transition of a stronger low-pressure system over northern Europe, with a cold front flowing over the continent. But these are usually not lasting long, as the high pressure can quickly build back. An actual pattern change is required for a more persistent cold air episode. The images below show the weekly temperature anomaly forecast from the CFSv2 weekly model. We can see the typical locked colder air, and warmer Eurasia. 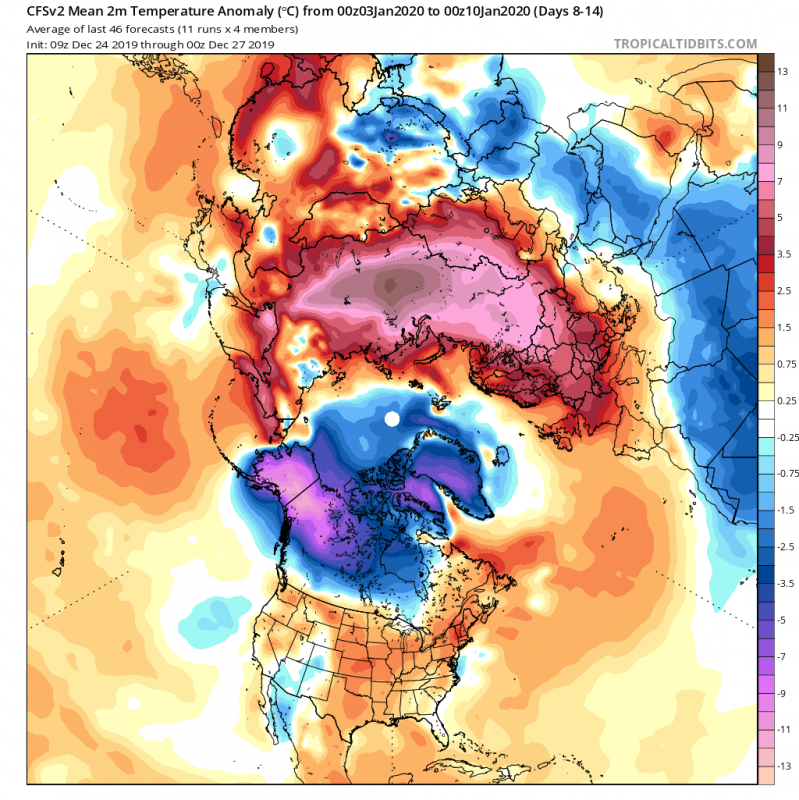 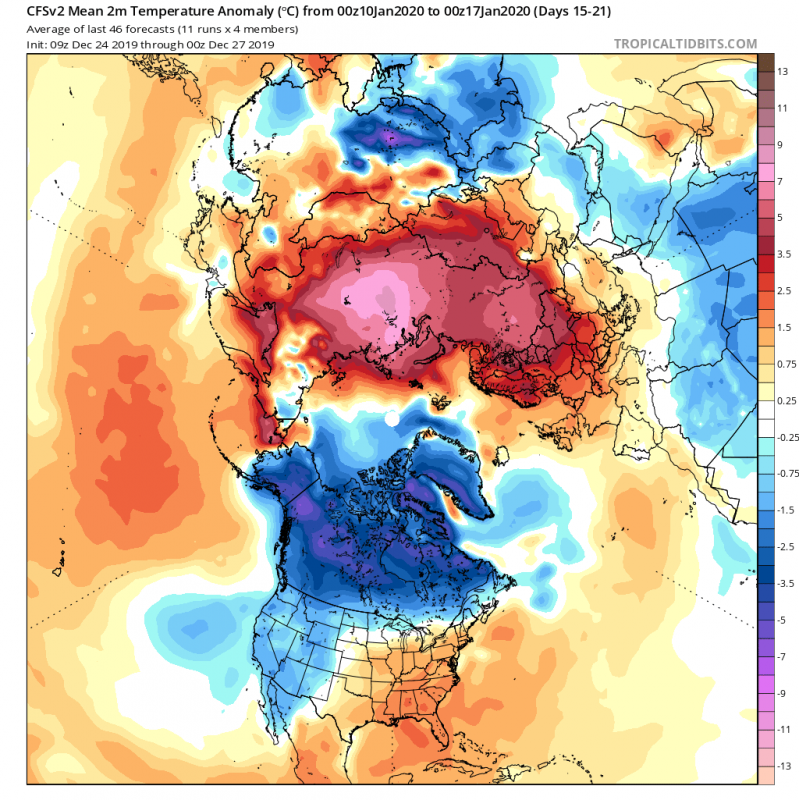 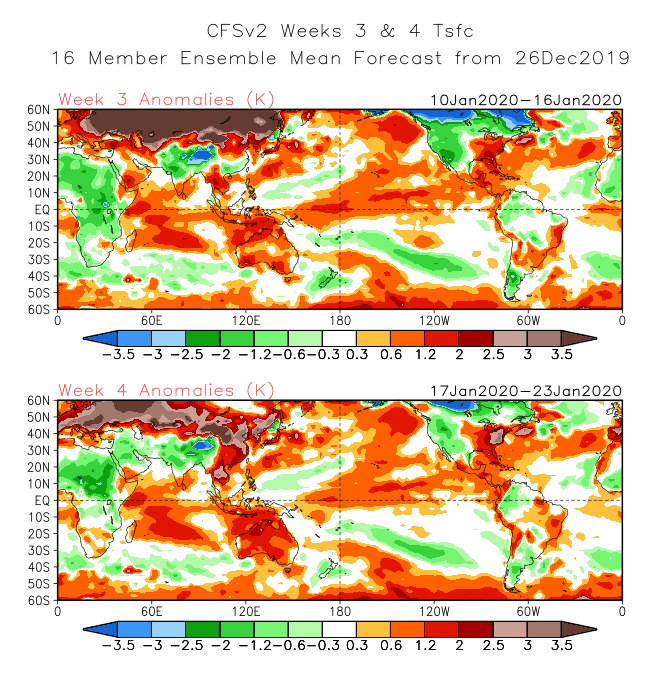 The Japanese JMA model also has an extended range, and it too shows the positive AO/NAO pattern and the Pacific-Pole-Atlantic pressure “tri-pole”. But, this JMA model does show an interesting feature. It pushes the European high-pressure area slightly towards north/northwest Atlantic, which actually tends to pull some north air into central and eastern/southeastern Europe in the second half of January. But this is currently a more isolated forecast, with not much support from the other forecasting systems. 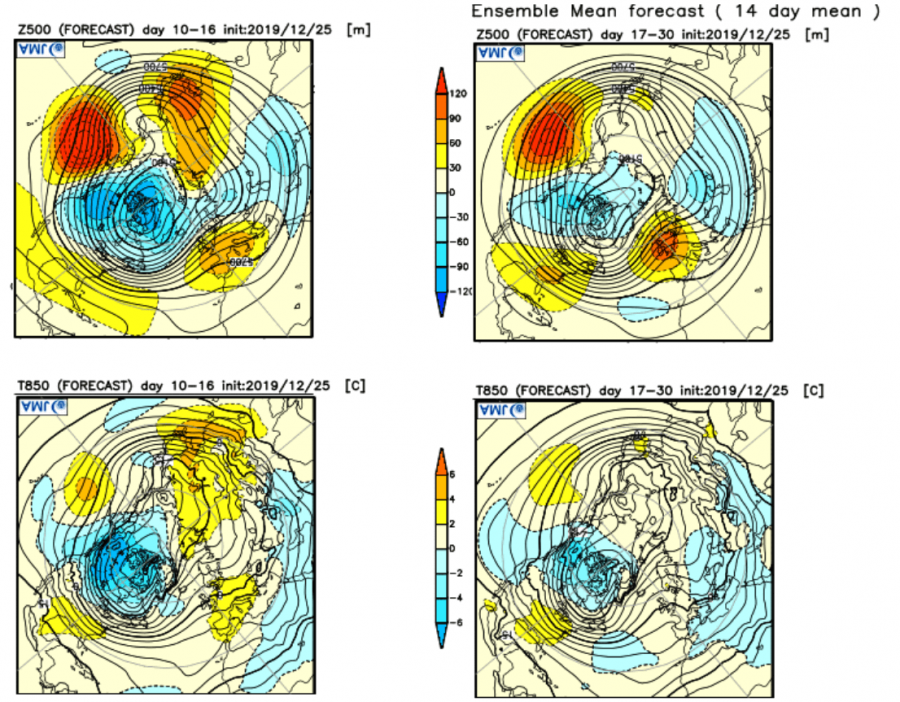 Looking at the snow depth forecast for the second week of January, we can see the usual high snow cover over Siberia and the Canadian sector. We can also see the extension of the snow cover over parts of the United States, while Europe struggles to develop any sort of significant snow cover, except for the higher levels of the Alps, and the far north, over Scandinavia. 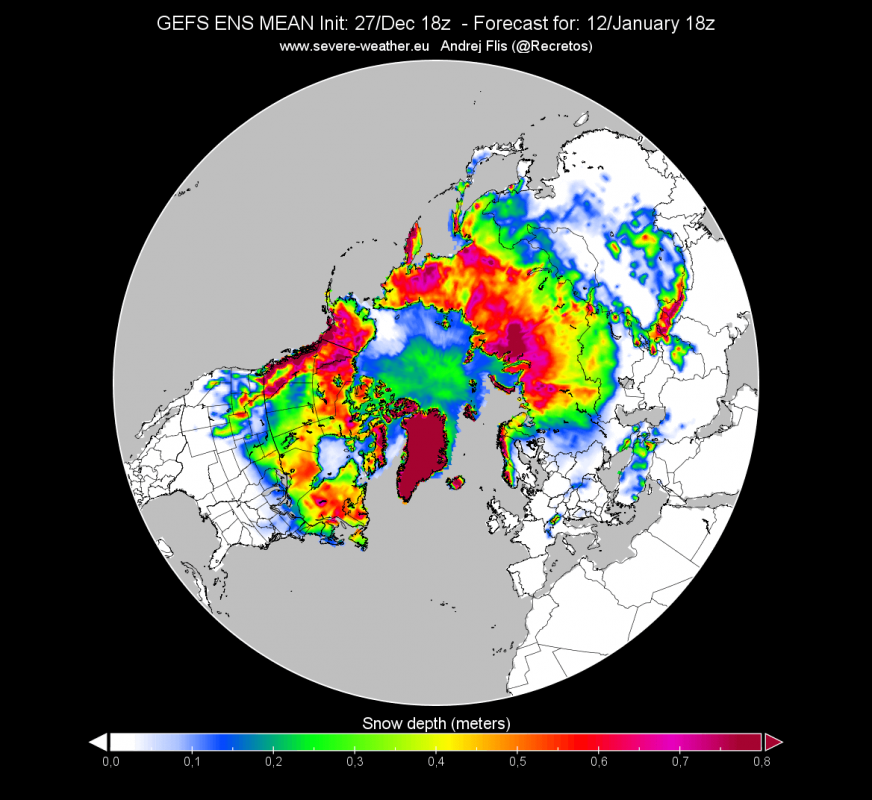 Europe seems to be in a pretty bad spot currently, as far as cold air and snowfall goes. No harsh winter weather is currently in sight for the medium and extended range. North America, on the other hand, has a private cold pool over the Canadian sector, with lots of cold air stored there, ready to be transported down into the United States. For Europe, we will need to see a pretty specific pattern shift to get persistent cold air over the continent. The proper shifting of the high-pressure area towards north and northwest Atlantic would be required, to start a cold meridional flow over Europe. For now, Canada and the USA seem to be winning the “2020 winter games” for the first half of January, extending likely into the second half of the month.

We will keep you updated on any important further development. While you wait for more updates, don’t miss the latest long-range forecast, going into February 2020: