Here is the latest update on the potential development of Tropical-like cyclone / Medicane in the Ionian sea on Friday. Essentially all models are confirming its development in the southern Mediterranean late Thursday (tomorrow evening) or early Friday morning, Sept 28th. The potential track should affect southern Greece (including Crete) on Saturday and then also Aegean sea and western Turkey on Sunday.

The pattern overview with ECMWF model is indicating a deep cyclone in the Ionian sea on Saturday, a good agreement with other models. The exact position is still to be defined, but overall agreement on the Medicane formation is quite good. 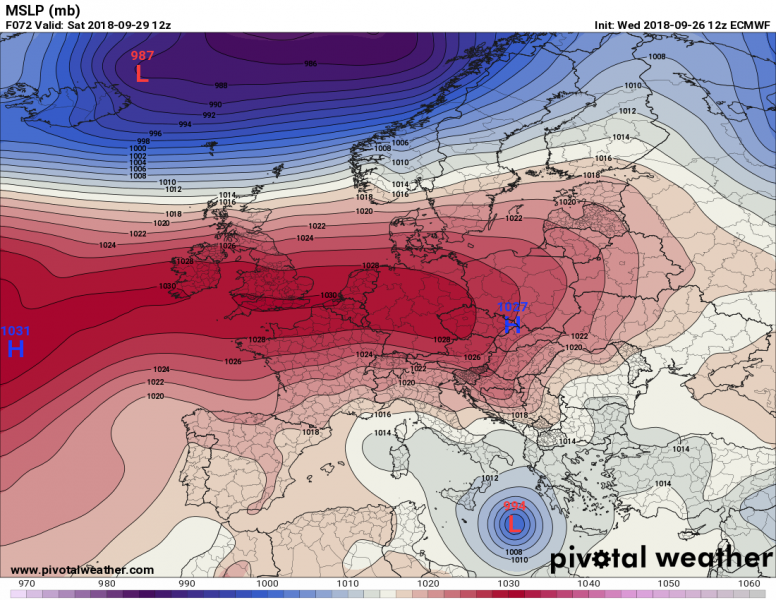 We take a look at 12 UTC runs by GFS, ECMWF and ARPEGE models. They all have a Medicane in the Ionian sea, ARPEGE is more aggressive and faster with nearing southern Greece already by the mid-afternoon. Both global models agree on a large cyclone somewhat further to the west. 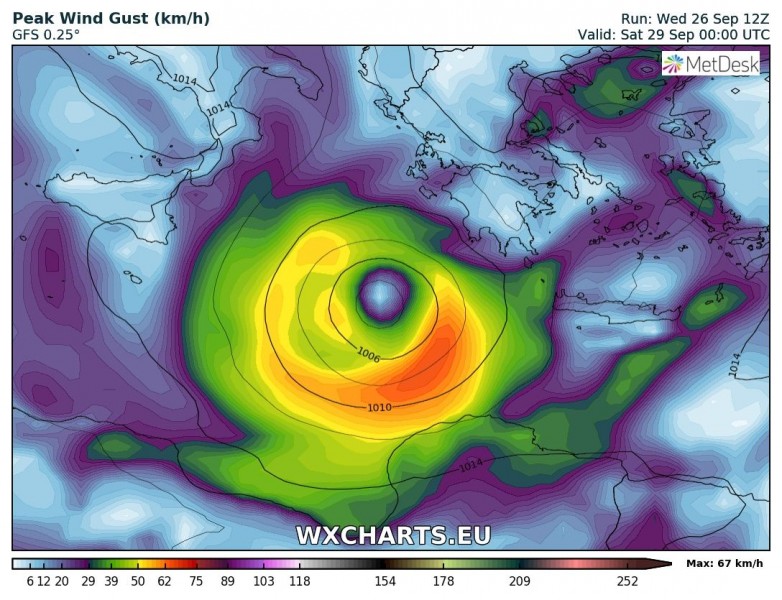 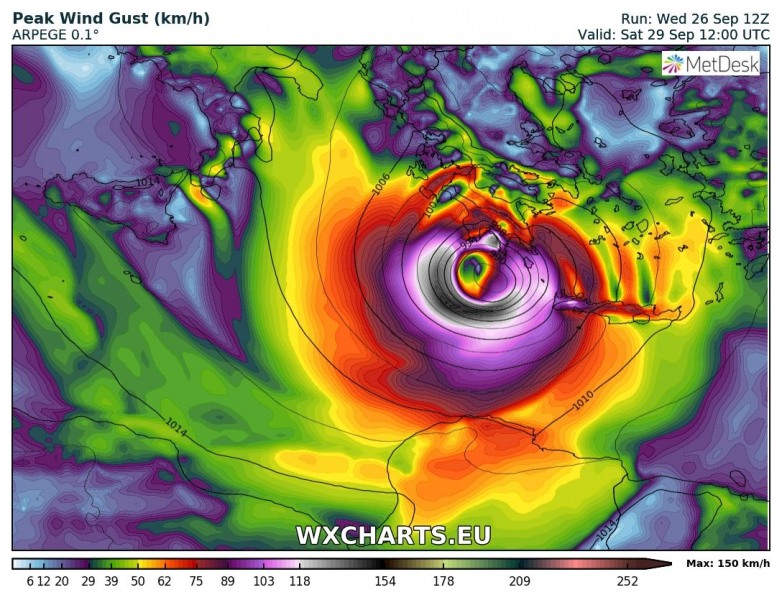 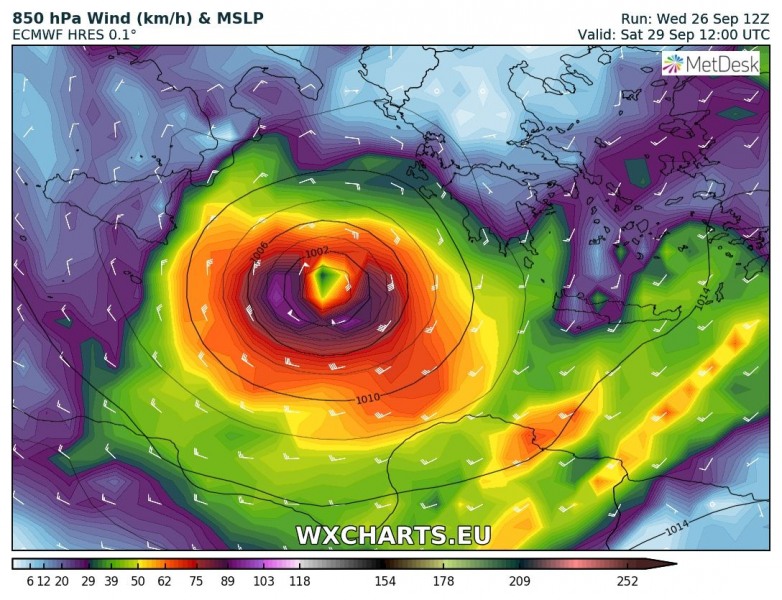 The Medicane is still pretty distinctly visible on all the models, ECMWF, GFS and ARPEGE. The differences are in the position of the cyclone: GFS has the Medicane’s centre right over the island of Crete, while ECMWF has its centre slightly north of Crete which would mean a very intense eyewall winds would smash the island pretty hard! On the other hand ARPEGE puts the centre of the Medicane even more to the north, over the Aegean sea and towards western Turkey, with very intense wind field and dangerous flooding potential. 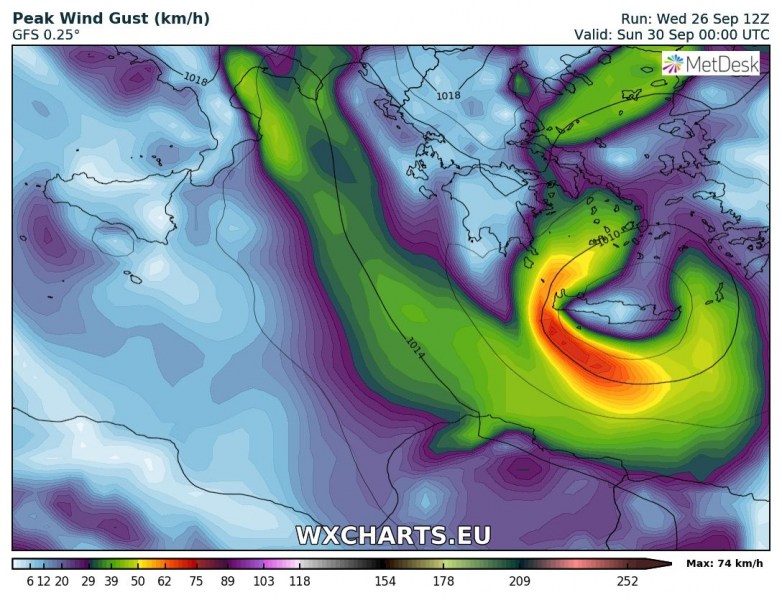 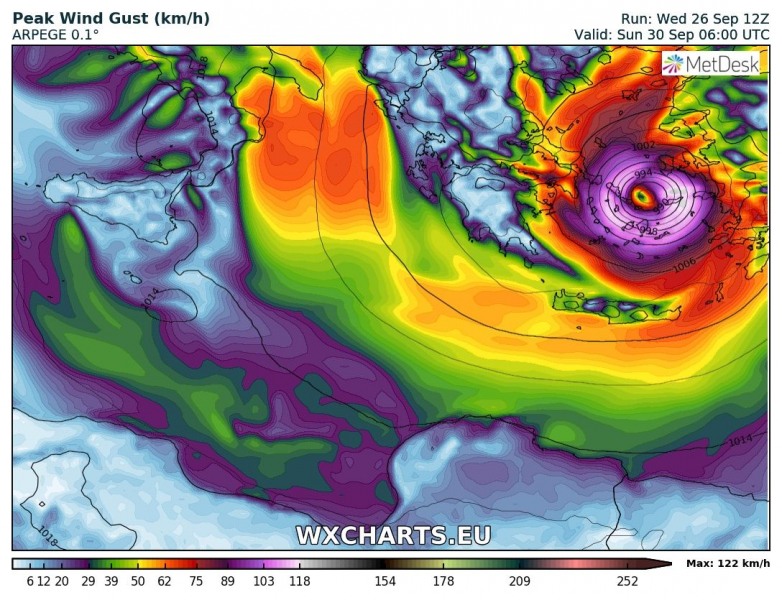 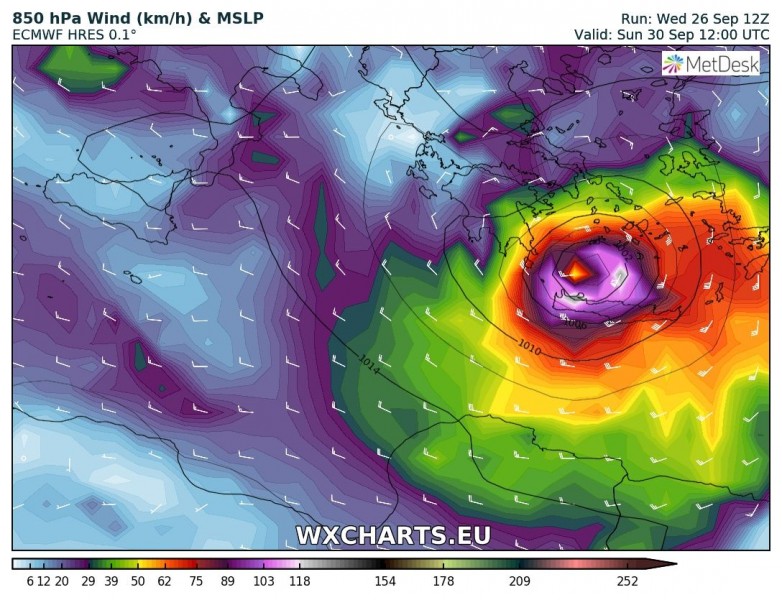 Peak with gusts swath per ARPEGE and ICON-EU models: both agree on severe to exrtemely severe wind threat for south Greece, the Aegean sea and western Turkey, partly also across the Crete Island – now they are nearing global models ECMWF and GFS, indicating more effect of the Medicane on Crete as well. Peak gusts could exceed 150 km/h! 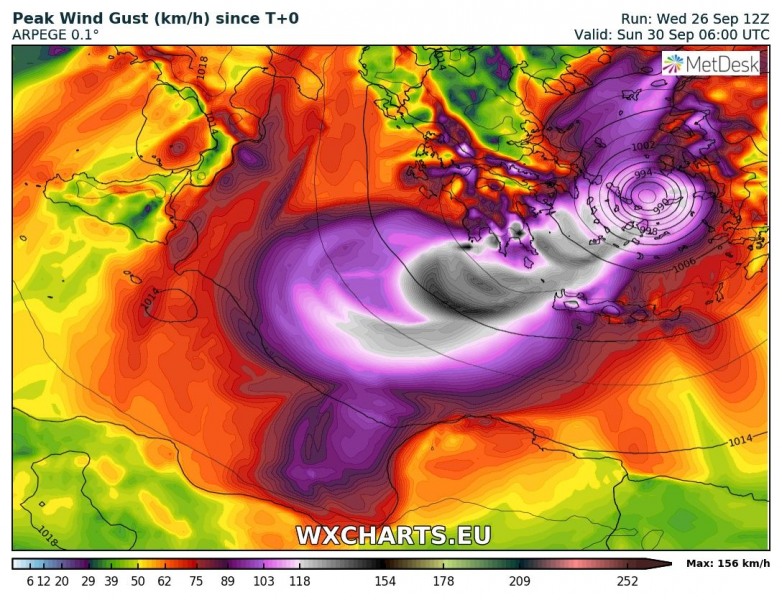 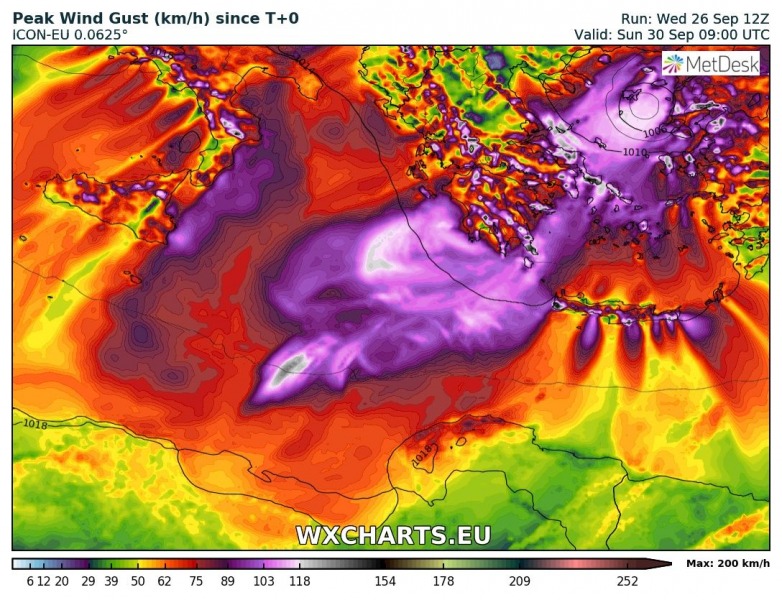 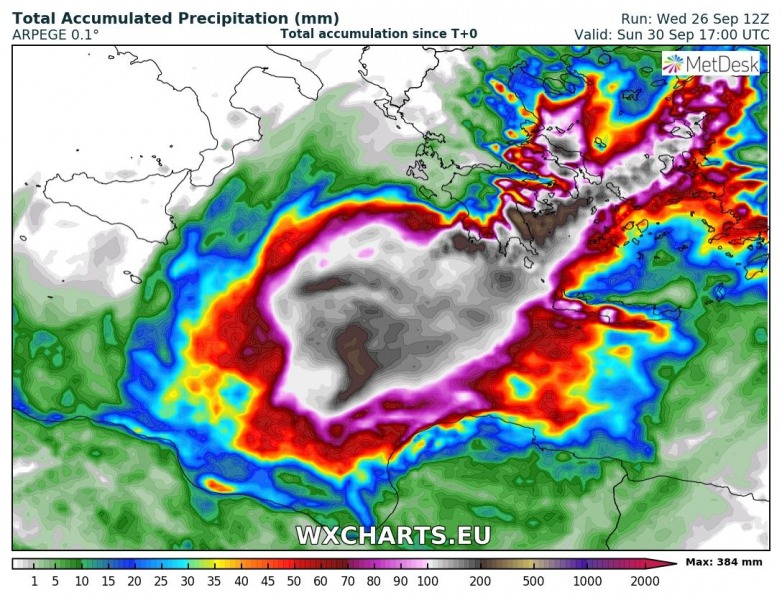 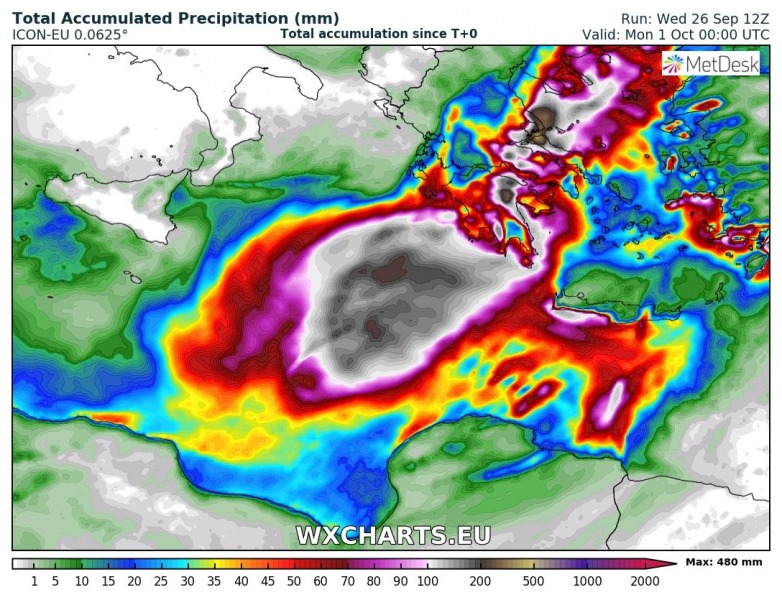 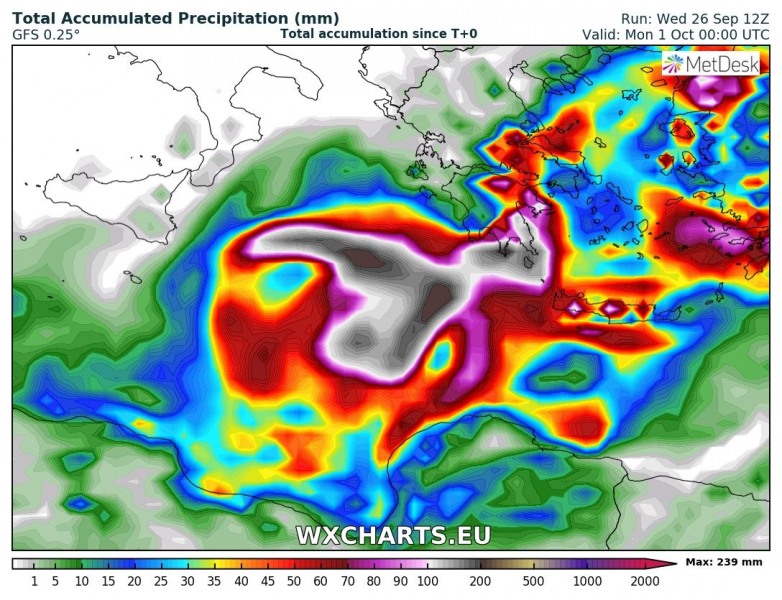 Now all the models are confirming a development of deep cyclone in the southern Mediterranean and Ionian sea within the next 36-48 hours. The Medicane will then track across southern Greece into the Aegean sea. Peak gusts could exceed 150 km/h and bring torrential rainfall as well. Life-threatening flash floods threat will be strongly enhanced!

Stay tuned for further updates soon as we get new model updates!