The current ridging pattern across Europe will soon change as new cold waves will advect south this weekend and into early October. We have been experiencing a very strong upper ridge with record breaking high pressure system in central Europe this week, this is now about to change. The ridge is collapsing as a new deep trough is digging into NE Europe today, resulting in a new cold front pushed towards east-central Europe tomorrow. Meanwhile the ridge over the northern Atlantic will re-stregthen and develop a new Arctic outbreak from northern towards central Europe in the first days of October. A powerful trough / upper low will be advected into northern Mediterranean on Tuesday, Oct 2nd.

Below is an overview of daily pattern evolution, starting tonight and until mid next week. We can see there are two frontal systems pushed towards the south, where the second one is more significant and could potentially bring severe weather with dangerous storms into the Mediterranean region early next week. 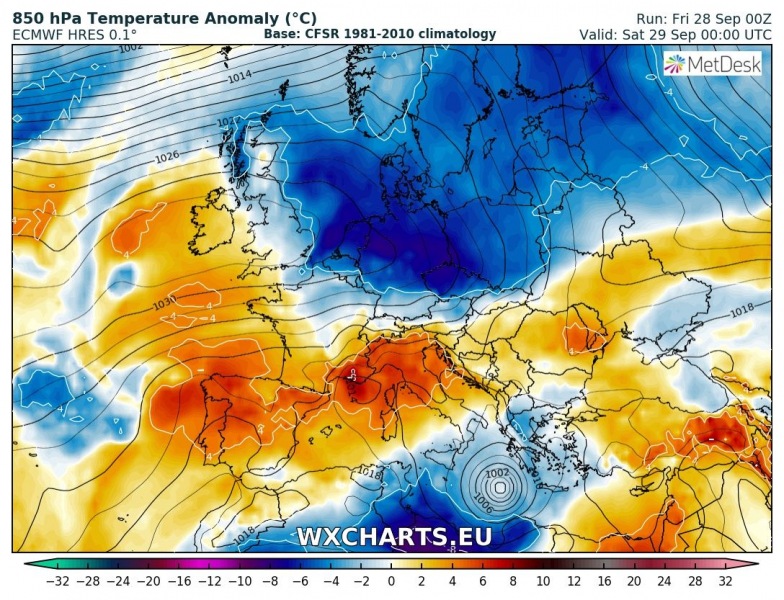 A fully developed Medicane can also be seen in the southern Mediterranean – see more details about the system here:

Valid for Sunday, September 30th – the trough over the eastern Europe ejects into SW Russia while weak upper low over far southern Balkan peninsula remains. A medicane will be ongoing over the Aegean sea. The ridge strengthens into the northern part of central Europe and results in cold advection into the Balkan peninsula.

Valid for Monday, October 1st – the upper ridge over the northern Atlantic re-strengthens and establishes meridional flow directly from the Arctic region towards the west-central Europe on the first day of new month.

Valid for Tuesday, October 2nd – the deep trough continues moving south and enters Mediterranean region where intensifies and develops a very deep upper low.
Significantly colder airmass advects behind it across the central Europe, part of WSW Europe and Mediterranean. Such a system could potentially bring a dangerous cyclone with severe weather outbreak and flooding potential across the northern and western Mediterranean – we will be monitoring the evolution in the coming days.

Valid for Wednesday, October 3rd – a large and deep cutoff low separates from the main trough and pushes further south into the western Mediterranean. The ridge over the north Atlantic expands into western and partly also into central Europe. A new deep trough pushes into Scandinavia. The cold outbreak associated with the Mediterranean upper low brings a much needed refreshment also into much of Iberian peninsula, as well as Algeria and surrounding areas. 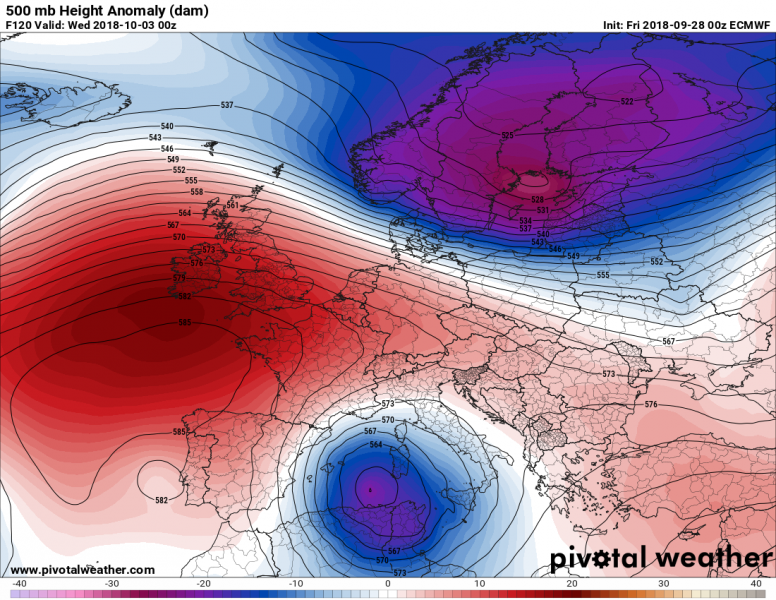 We will continue monitoring pattern evolution in the coming days and keep you updated with more details outlook on the systems evolving – stay tuned!