Europe is dominated by two prominent features this week, a large almost stationary upper trough over W Europe and a strong upper ridge with an intense heat wave from southern into east-central Europe and Balkan peninsula. Such pattern usually develops powerful advection of moisture between these features, supported by a strong jet stream aloft, supportive for development of severe thunderstorms.

First severe storms are expected later today as a weak wave crosses France and convective initiation seems likely very late in the afternoon into evening hours across E France towards W Germany. Being in a zone of strong shear and moderate instability, storms will be capable of producing severe winds, torrential rainfall and large hail. Clustering of storms is probable overnight while the activity will be spreading into W Germany. 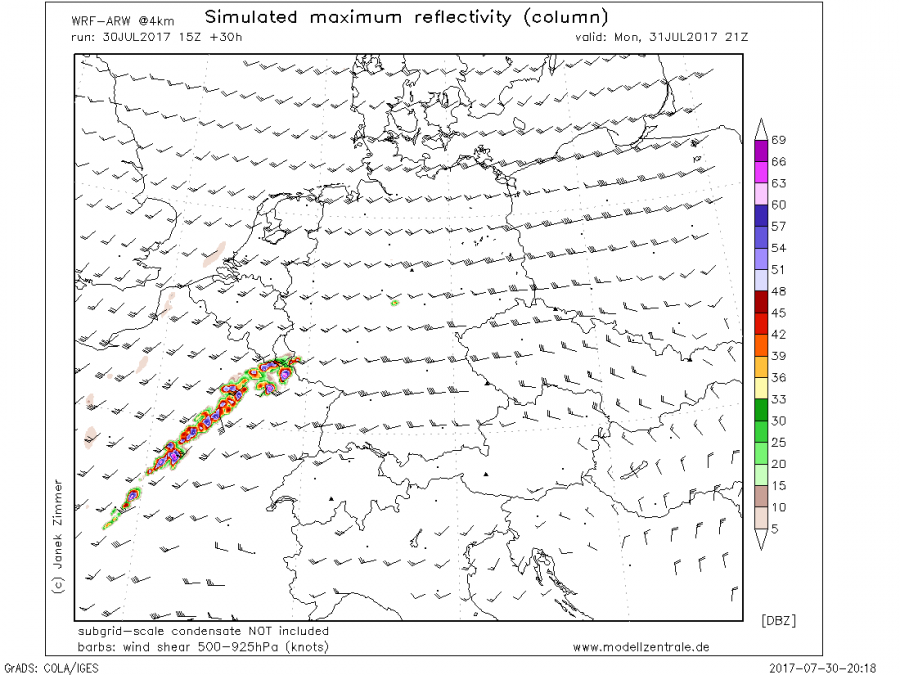 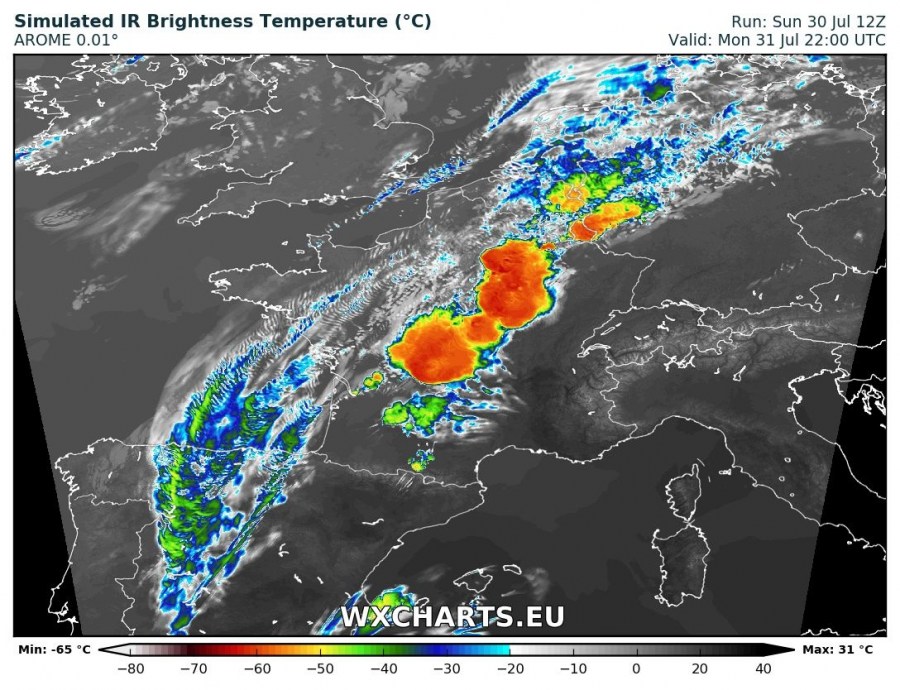 Tuesday afternoon’s storm activity will be supported by large scale ascent associated with a short-wave trough rapidly moving across France and N Germany. Given the very strong upper level winds, deep-layer shear and helicity will be favorable for organized storms, which will rapidly develop within the strong instability zone. 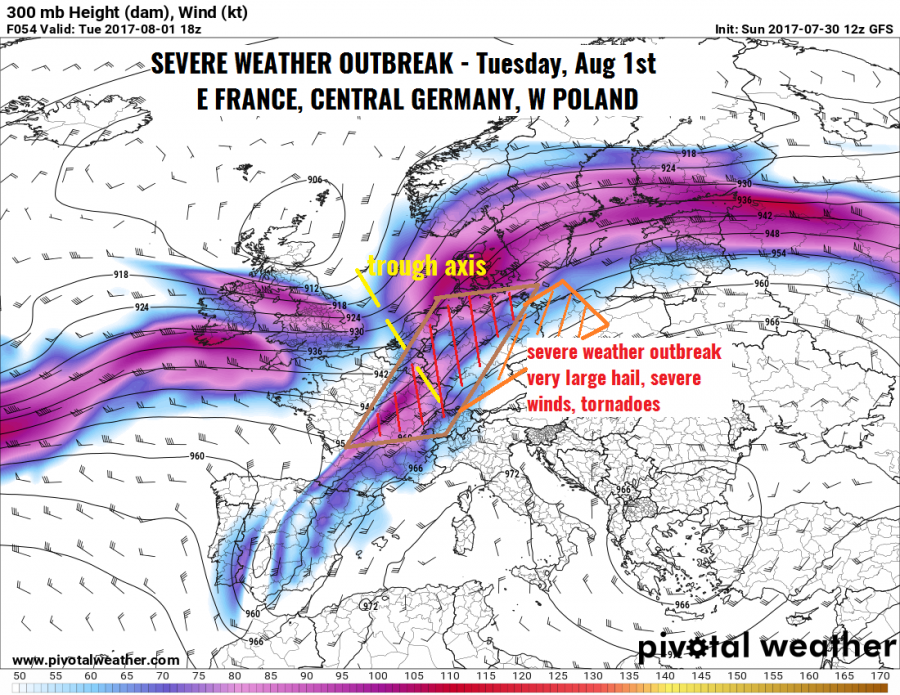 With strong warm advection under the jet stream, moisture recovery will be ongoing from today into tomorrow and dewpoints in low 20s °C are expected. This will yield strong instability with MLCAPEs locally in excess of 3000 J/kg. Initiation is expected as soon as the capping inversion erodes in the mid afternoon. Several intense discrete supercells seem likely to form from E-CNTRL France into W-CNTRL Germany. Storms developed in this strong shear will be moving very fast into E Germany and W Poland with potential to produce very large hail, severe damaging winds and tornadoes, especially as LL shear and helicity increases in the afternoon hours. Fast-moving storms could eventually merge into large clusters with derecho-like potential along the leading edge of a bowing segments that may form. Widespread wind damage potential exists!

Accumulated rainfall map reveals the approximate paths of severe storms along the diffuse frontal zone, extending from central France across Germany into WNW Poland. However, it has to be noted that when large storm clusters form, they tend to have more right deviant motion so therefore do not ignore potential for damaging storms also more south of the simulated rainfall streaks. 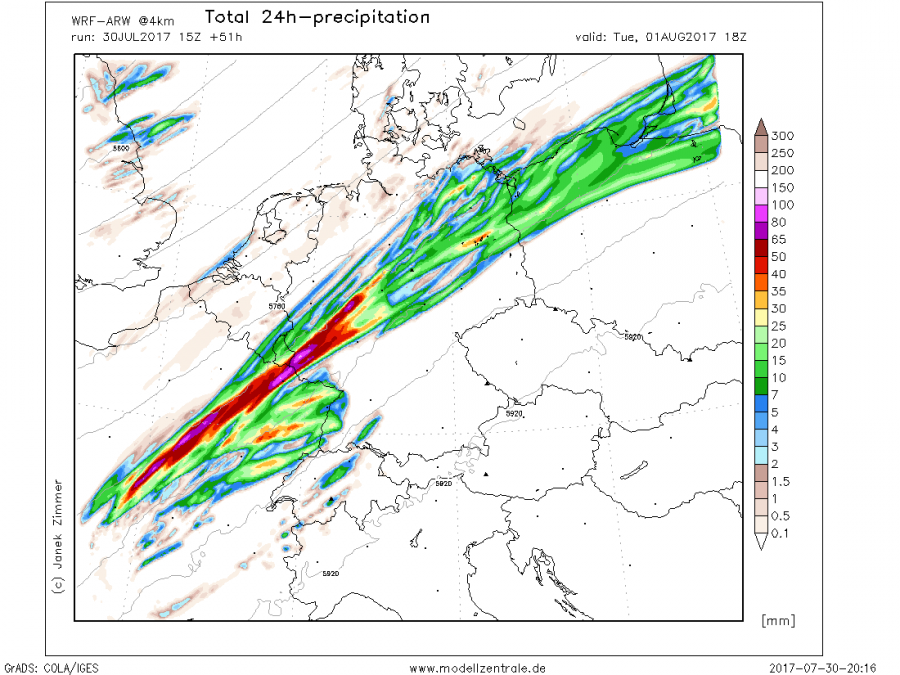 Simulated radar reflectivity reveals several intense discrete supercells in the late Tuesday afternoon. All types of severe weather will be possible given the great overlap of strong shear and high instability, if intense mesoscale convective systems form in the evening, extremely severe winds threat will develop. 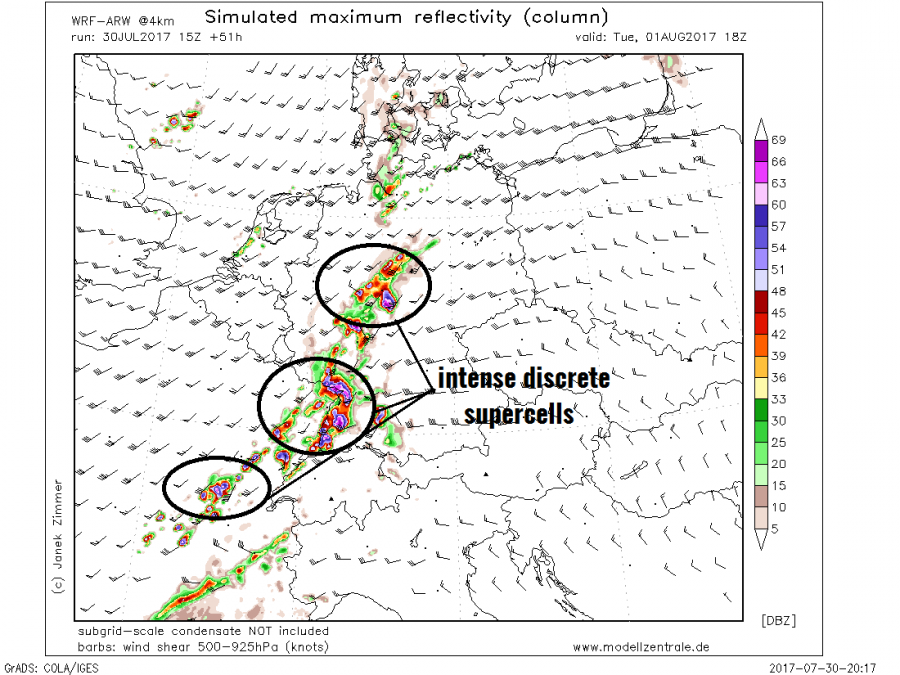 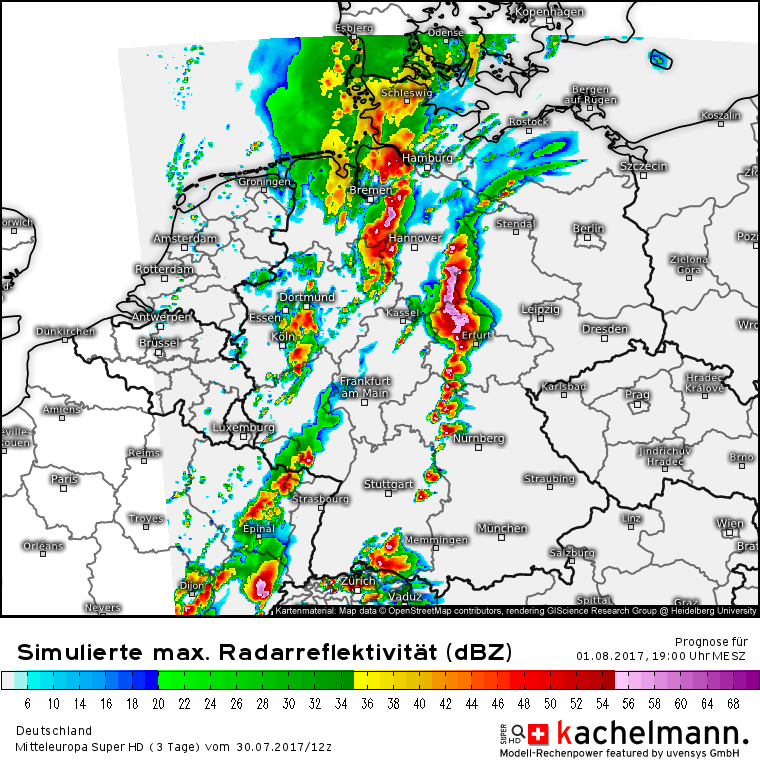 We will have further updates on the evolution of this dangerous weather event soon! We are closely monitoring the model trends as this pattern/setup has a high potential for damaging storms and could lead into issuance of HIGH risk for parts of the aforementioned regions on Tuesday. Stay tuned!