Models are confirming an extremely warm airmass spreading and maintaining across a large part of east-central Europe and the Balkan peninsula this week, both low- and mid-levels will experience 10-15 °C warmer airmass than normally for this period. Temperatures will locally climb towards the 30 °C!

Let’s see some day-to-day details regarding the pattern evolution across continental Europe this week (Oct 21-27th).

An upper ridge is located across eastern Europe, extending into central Europe, the Balkans and the Mediterranean. To the west, strong ridge is located over the N Atlantic with a long-wave trough ejecting into SW Europe and becoming a large upper low. A powerful jet-stream on the eastern flank of the low is resulting in a strong warm airmass advection into central and eastern Europe. 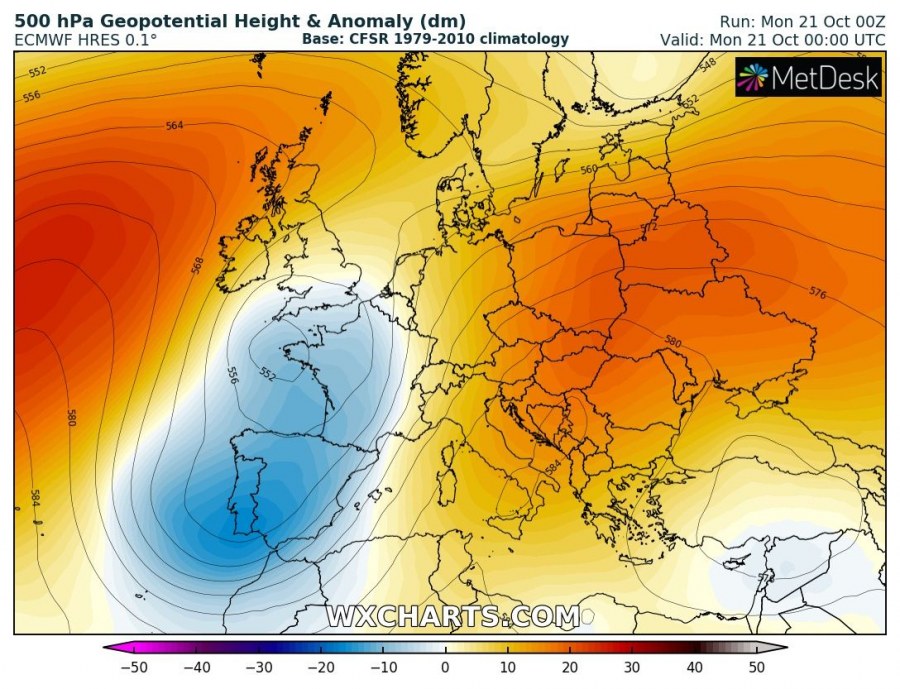 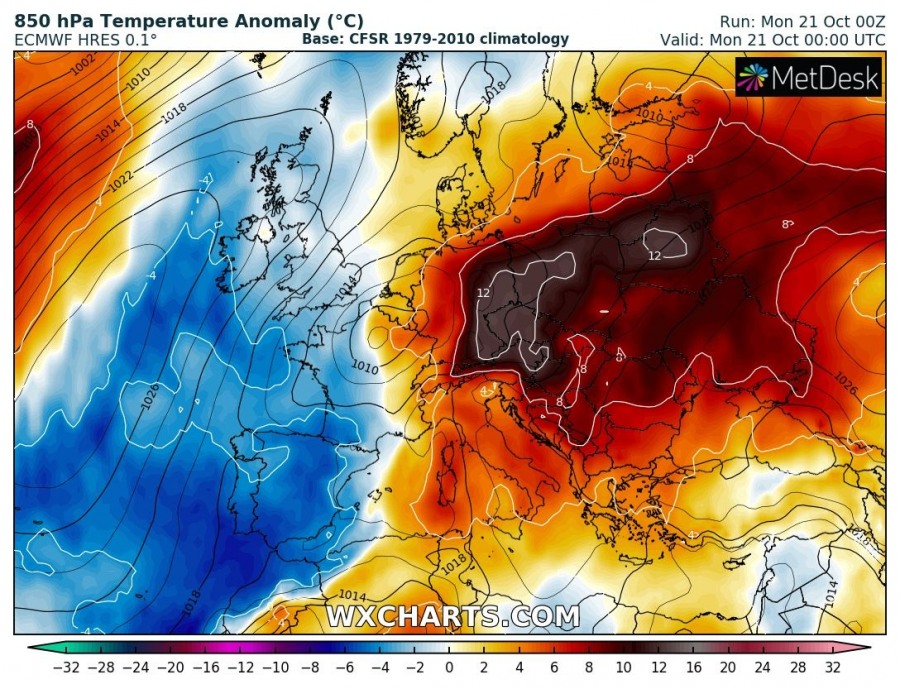 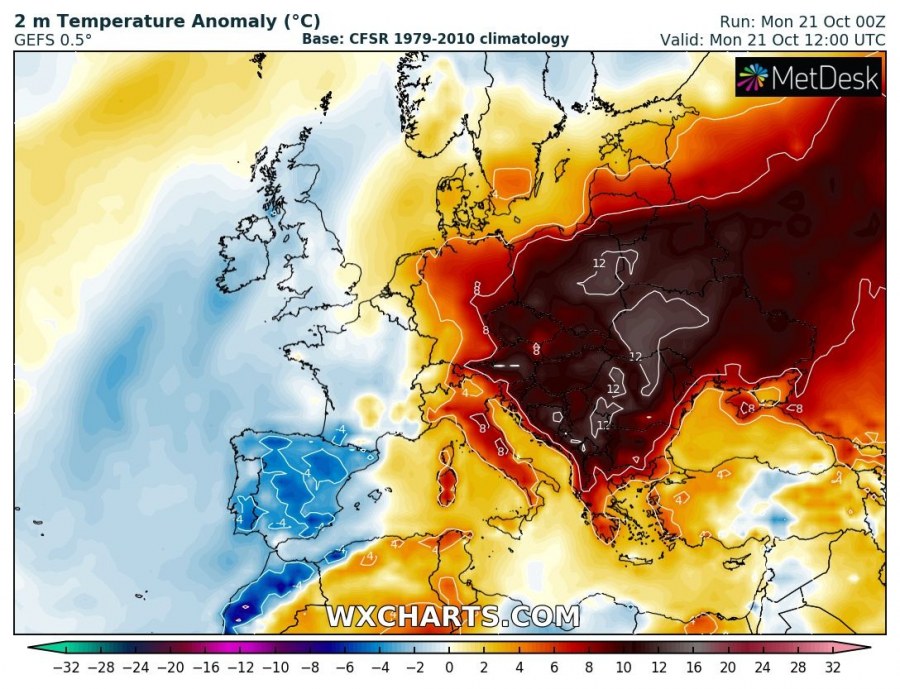 The trough, now acting as an upper low over Iberian peninsula, resulting in further advection of very warm airmass into east-central Europe. Strong ridge persists across E Europe. A very warm day is again expected across the Balkans and further north towards the Baltic region. Cooler weather is expected across Spain and Portugal under an upper low. 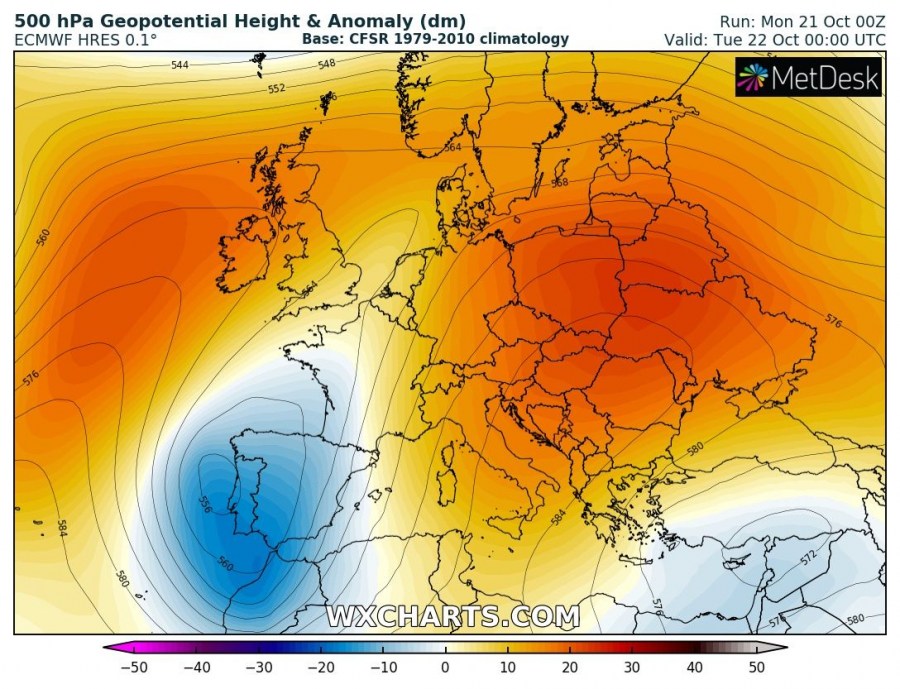 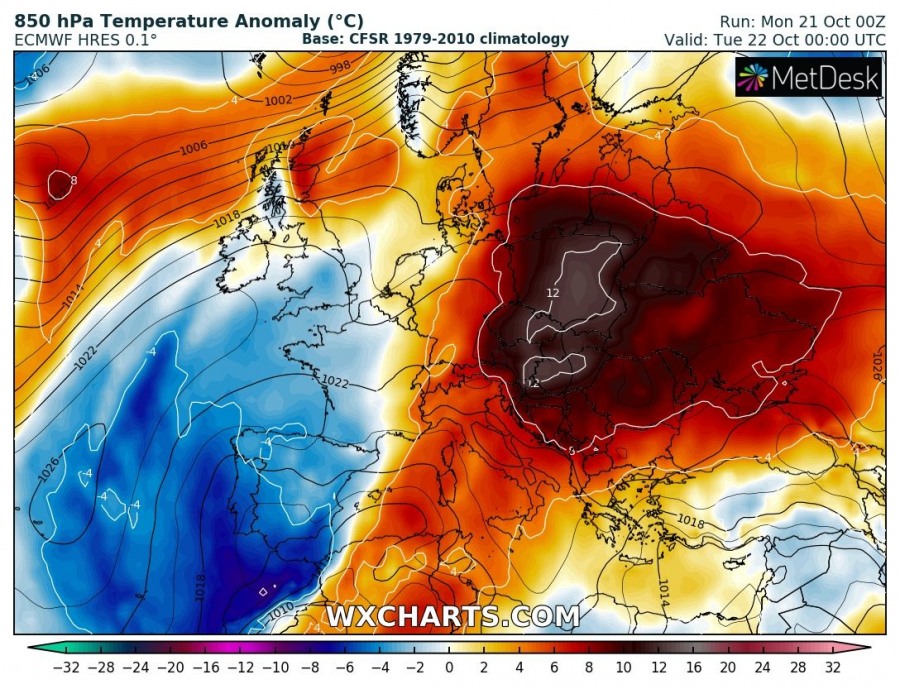 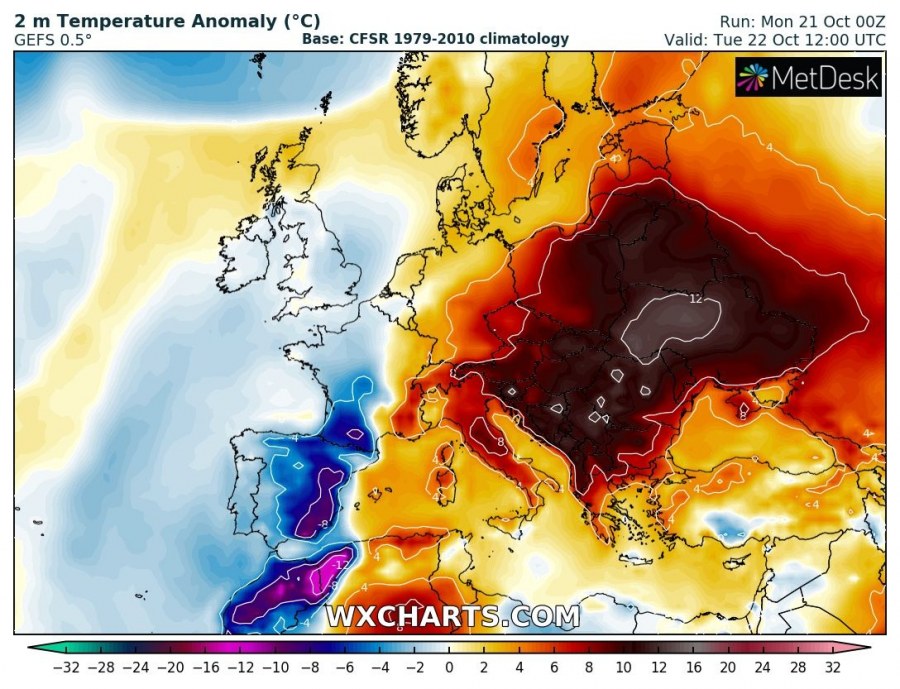 A strong upper low remains over SW Europe, Iberia and NW Africa while an upper ridge expands from E Europe further west into central Europe as well. The result is an increasing temperature also over the Alpine region, and indeed stable weather. Warmer airmass spreads into France and Germany as well. Very cold airmass advects into Morocco and NW Algeria in the wake of the upper low. 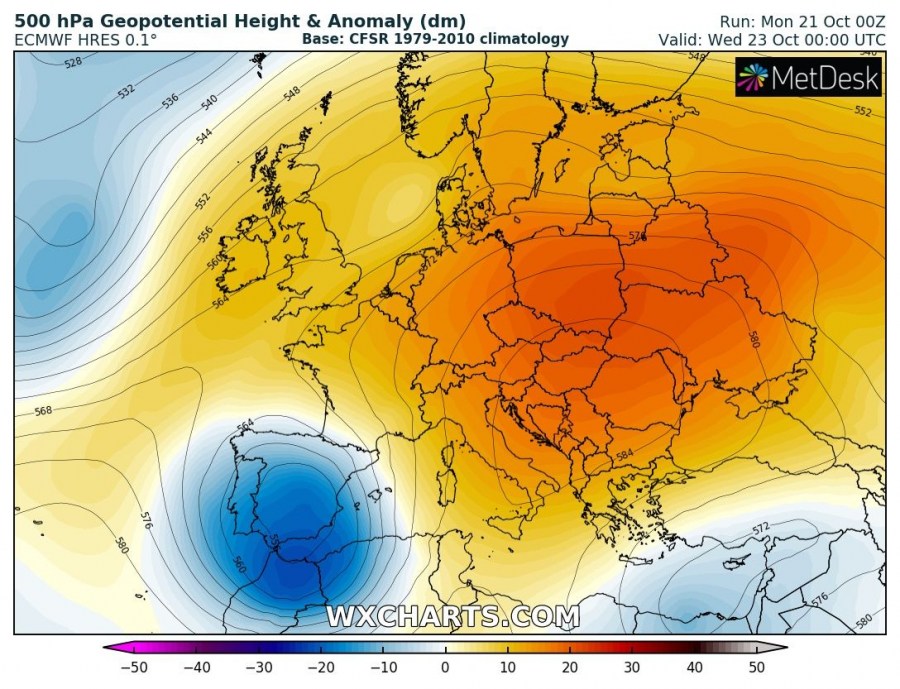 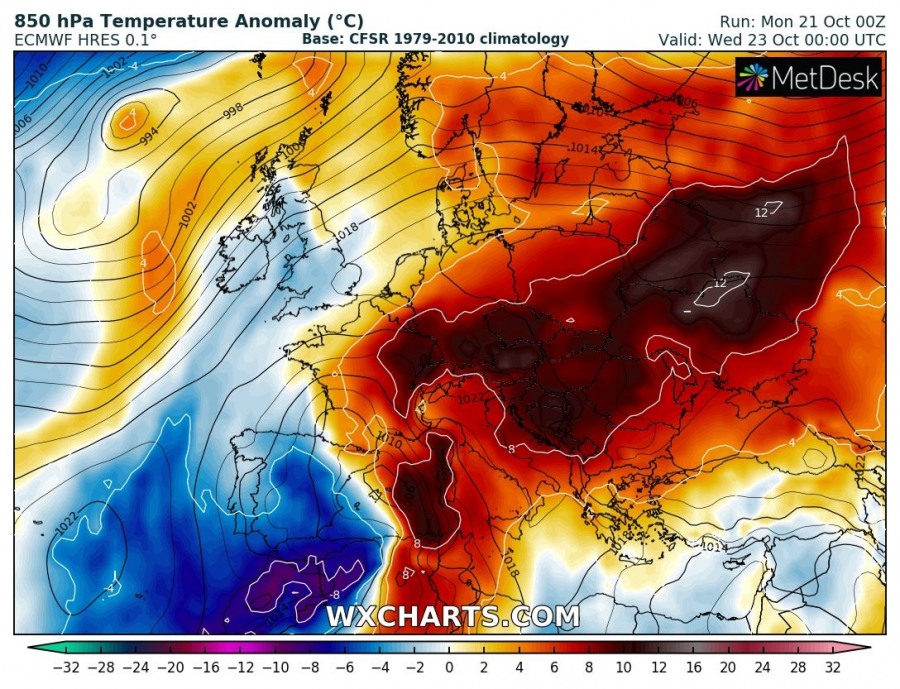 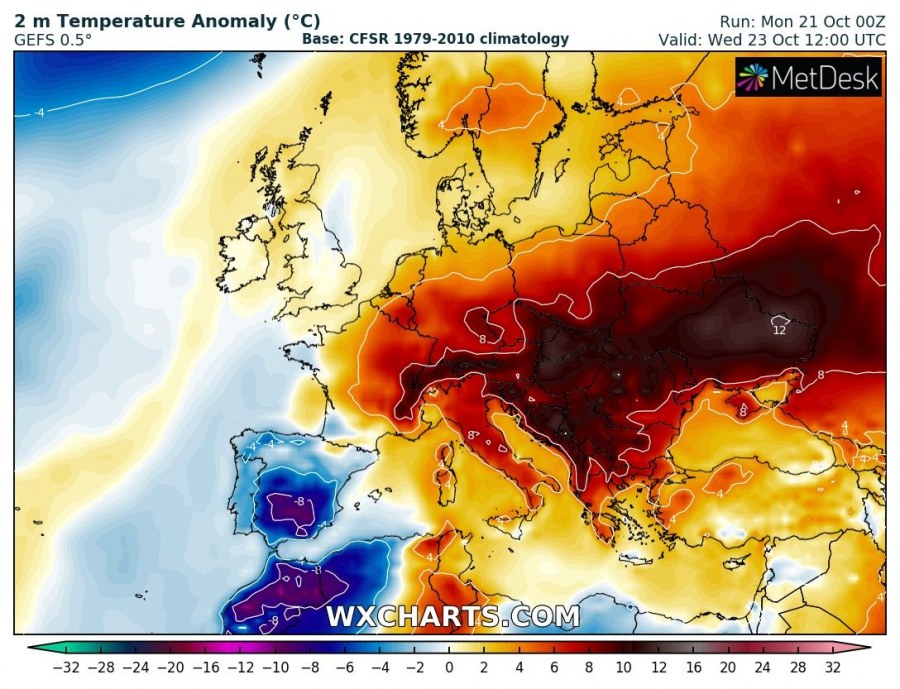 Similar to a day before, an extensive upper ridge dominates east-central Europe and the Balkans while a now weakening upper low remains over Iberia, W Mediterranean and NW Africa. Extreme temperature anomaly develops over central Europe, resulting from both warm advection from the Mediterranean and from the subsiding air beneath a strong ridge / high-pressure system. Further north, a new deep trough enters N Atlantic and WNW Europe. 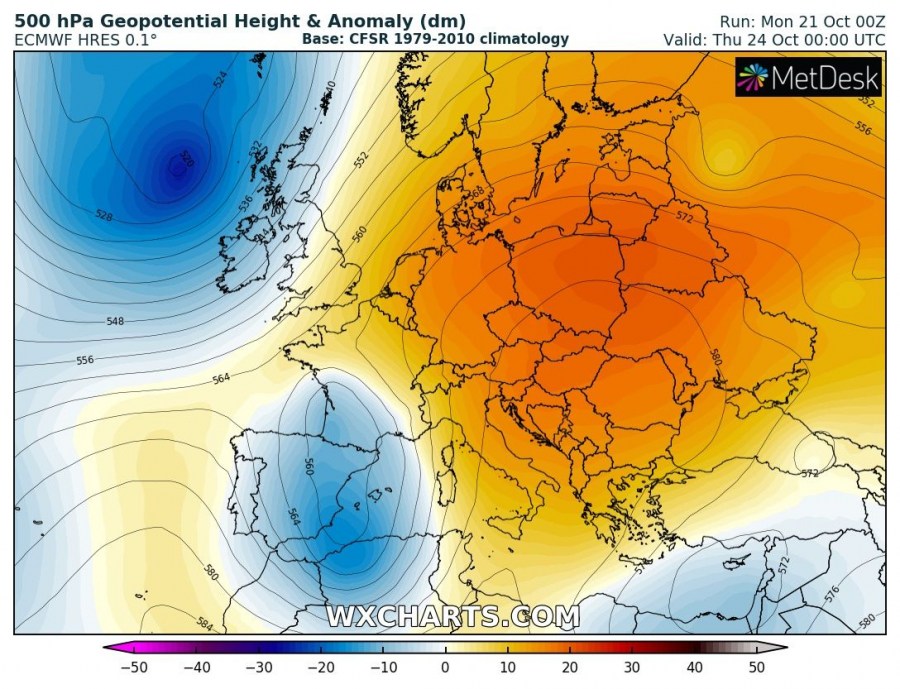 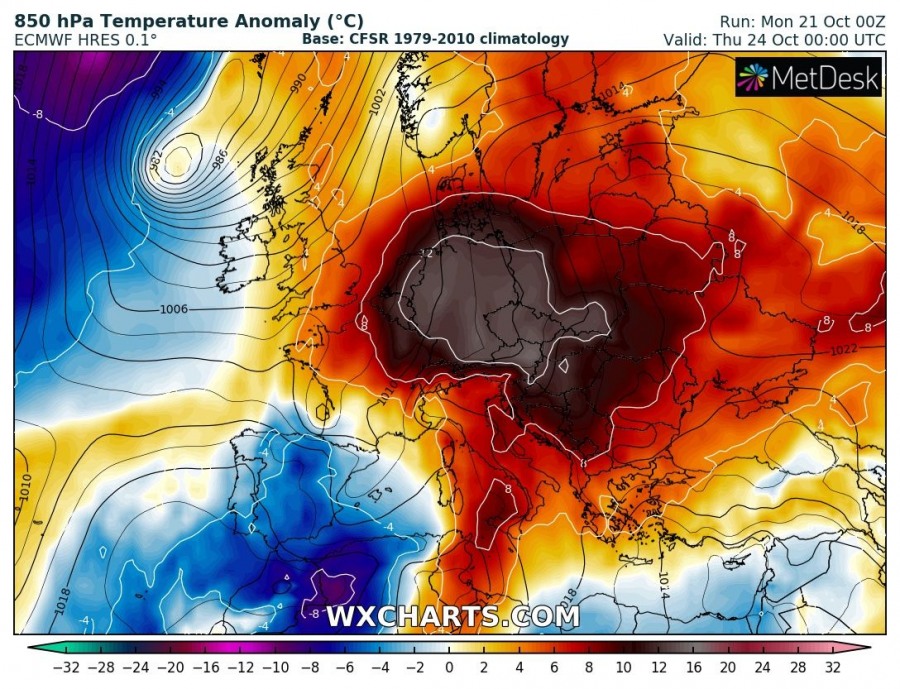 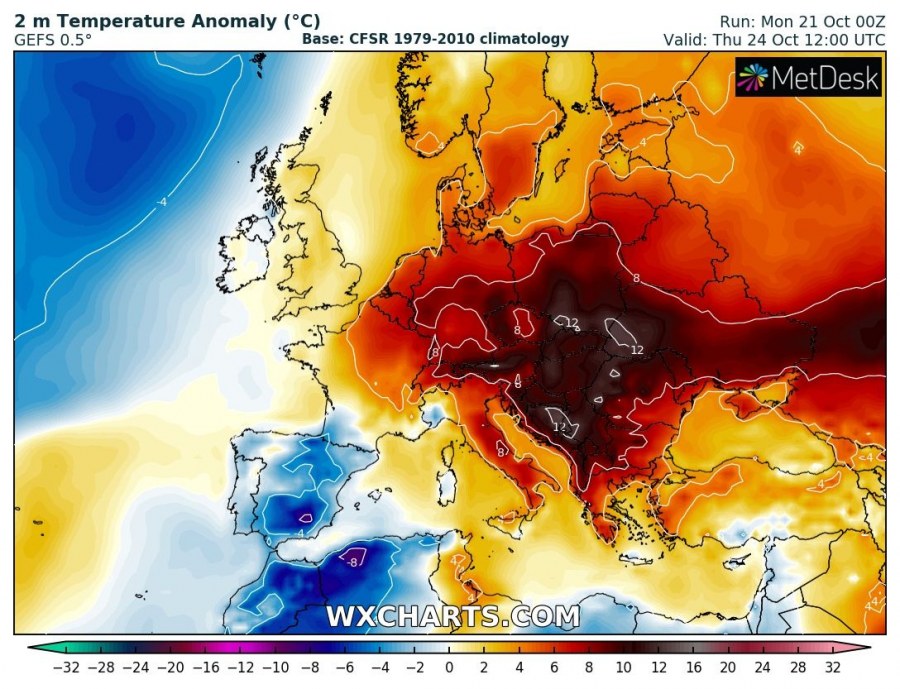 A powerful upper ridge with strong high-pressure system persists across ENE Europe and the Balkans while a weakening upper low drift further east across W Mediterranean and NW Africa. A large trough from the N Atlantic pushes towards Scandinavia. An impressive temperature anomaly spreads across ENE Europe with locally more than 15 °C warmer airmass than normally for late October! A new ridge begins developing over W Iberia while the cold airmass pushes into Algeria with the upper low. 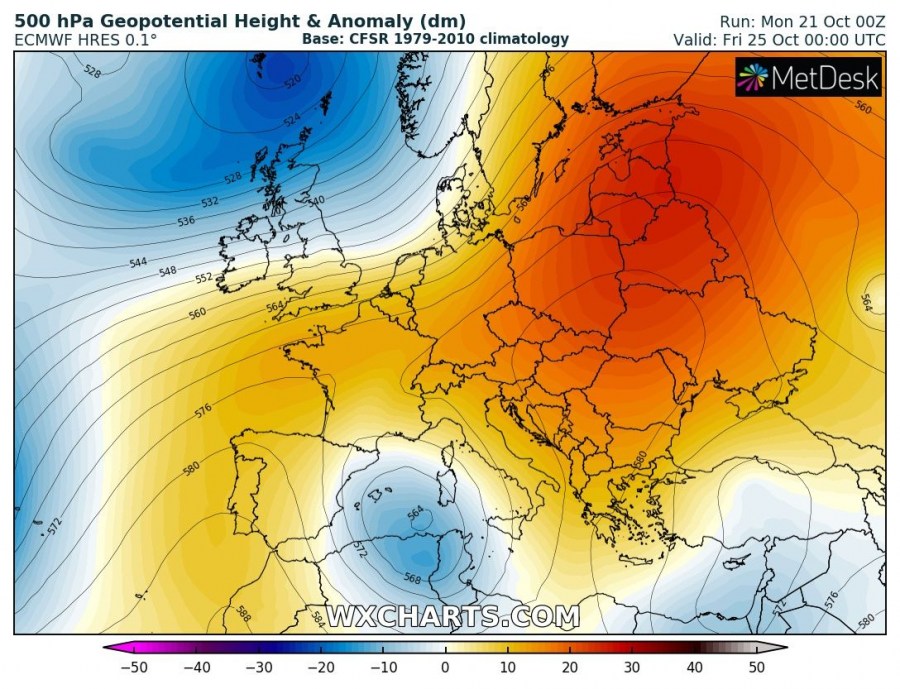 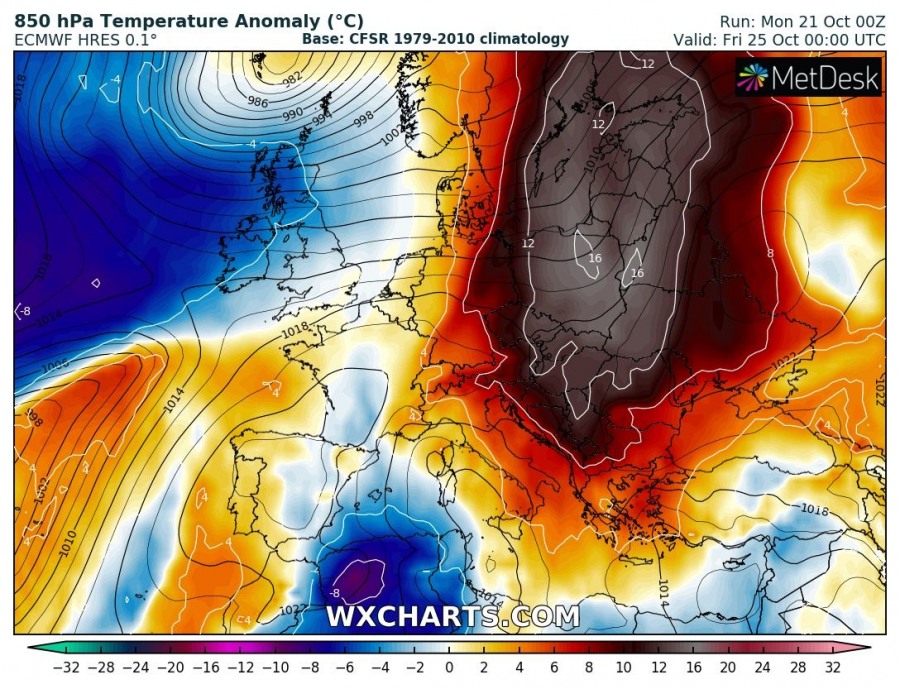 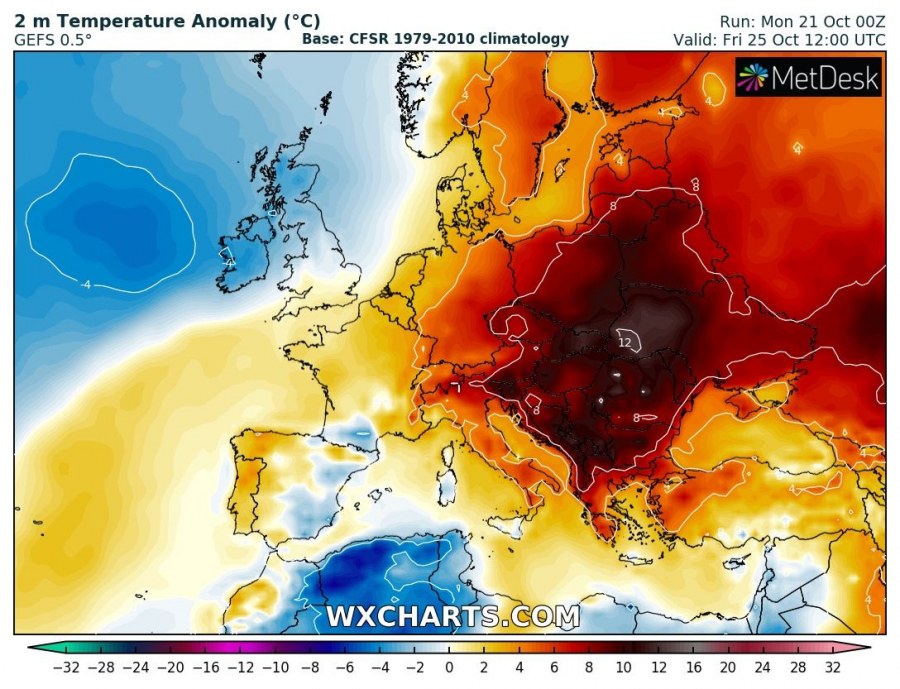 Upper ridges from E Europe and Iberia merge into a larger blocking ridge dominating much of Europe. To the north, a deep trough pushes from WNW Europe across Scandinavia while warm airmass remains further south across the Balkans and east-central Europe. Warm advection also takes place across western Europe ahead of another trough / surface low moving towards the British Isles and Ireland. An upper low over N Algeria and Tunisia still resulting in cooler and unsettled conditions across the WSW Mediterranean. 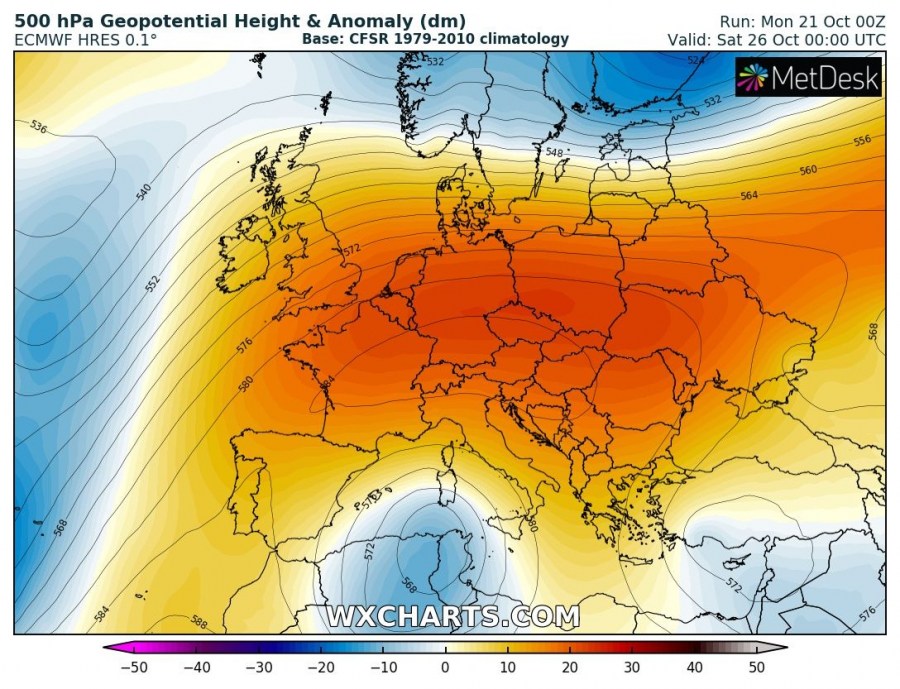 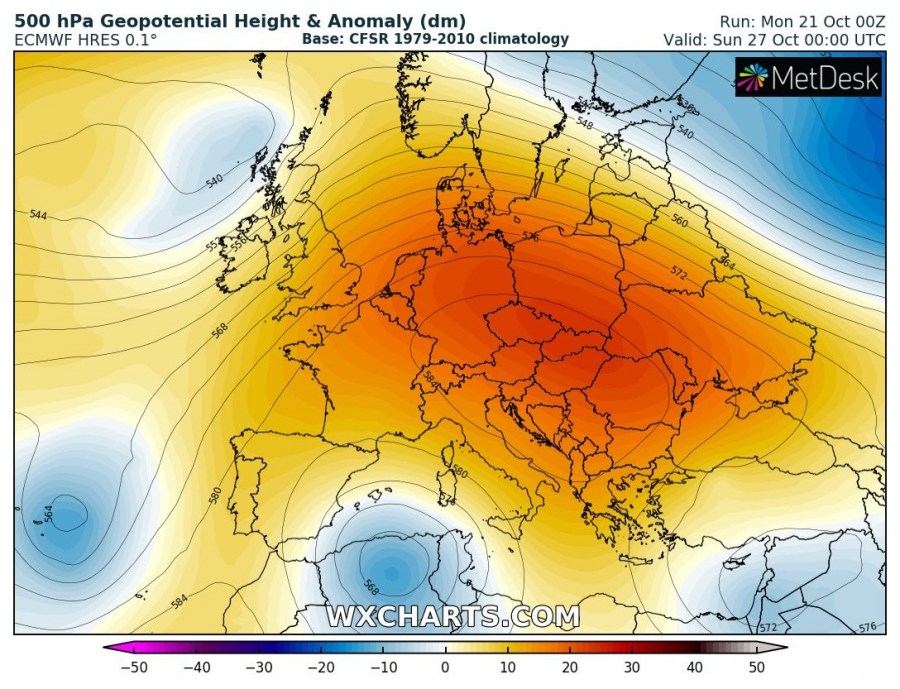 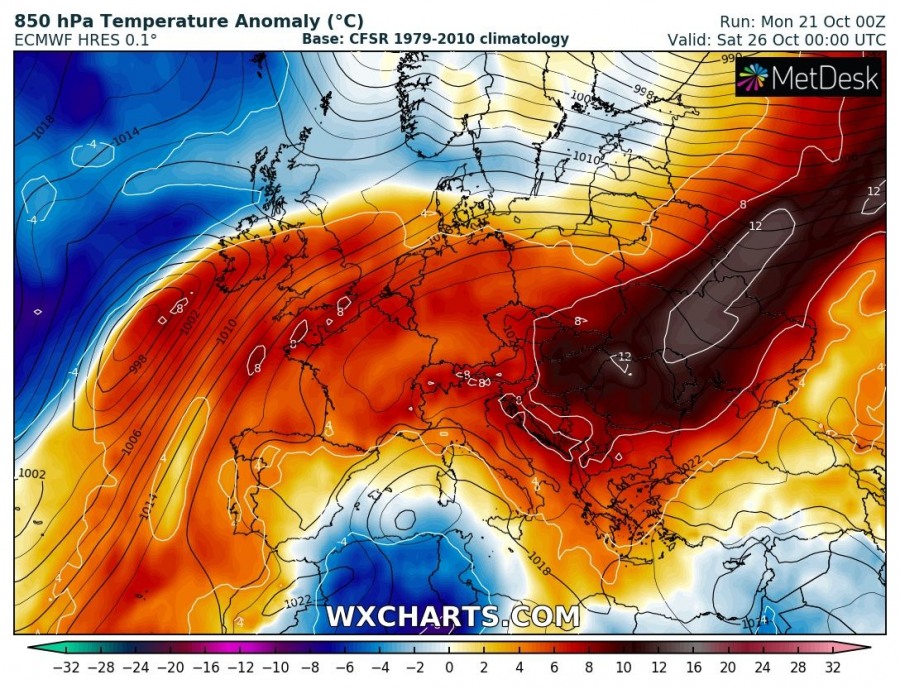 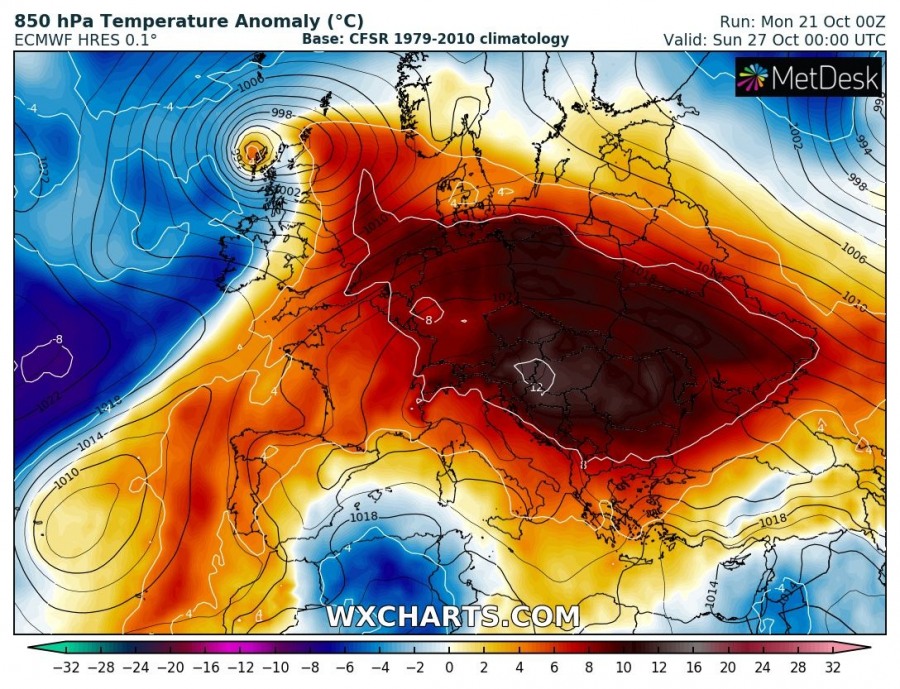 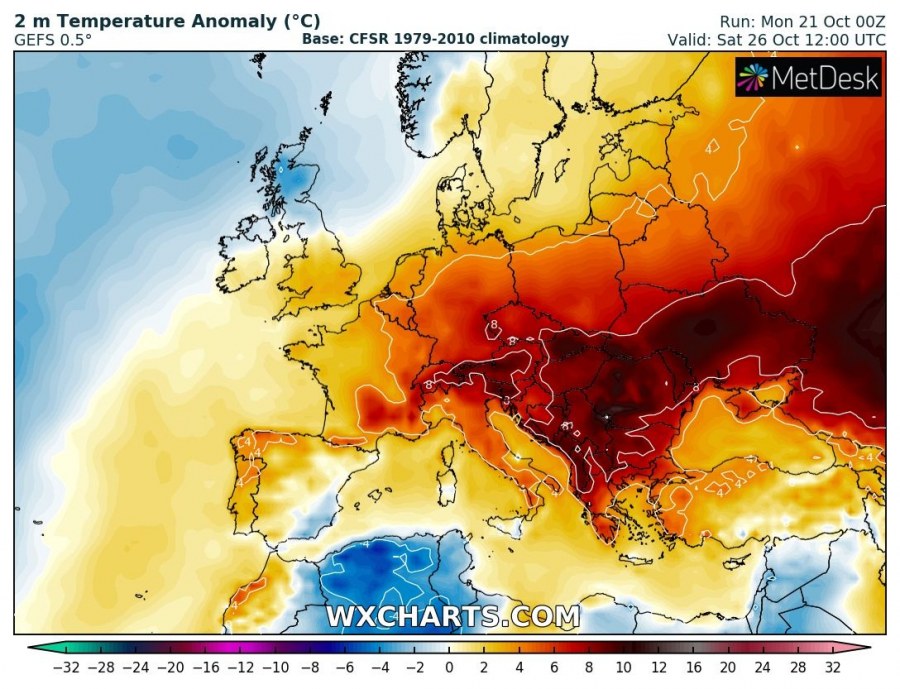 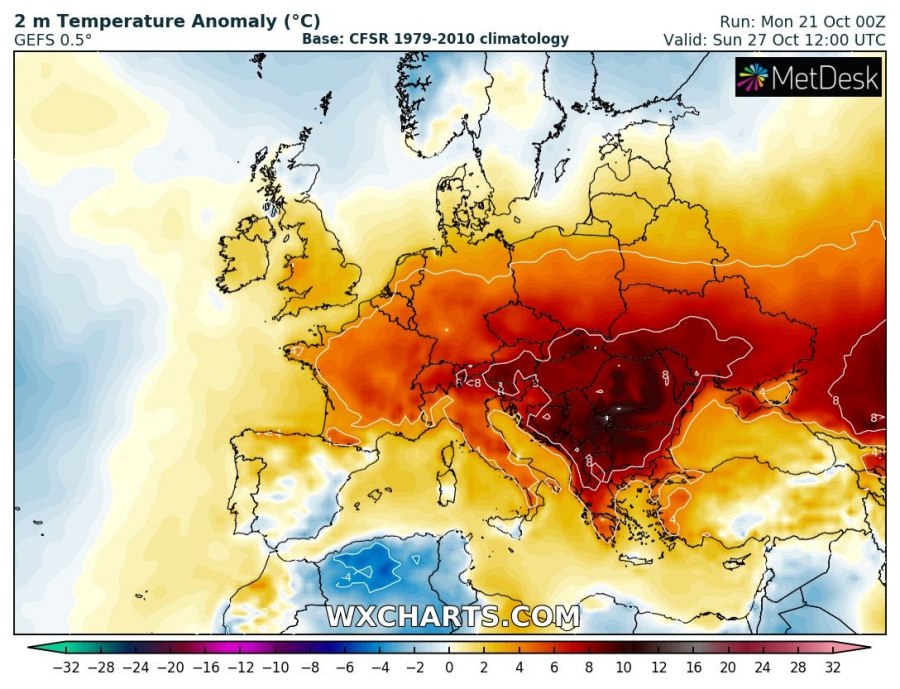 This week’s pattern could potentially result in some record-breaking temperatures for late October. Stay tuned for further updates as the pattern evolves.

Extreme amount of rainfall (locally 300-400 mm) is expected across the western Alps through the next 3 days, Oct 19-21st