A rather classic but a very impressive winter storm – a so-called Nor’easter is moving along the US east coast today and is bringing powerful winds along the coastal areas as well as intense snow blizzard conditions inland across the NE states. Currently at a mature stage, the cyclone has already deepened below 960 mb, very low for any winter storm! 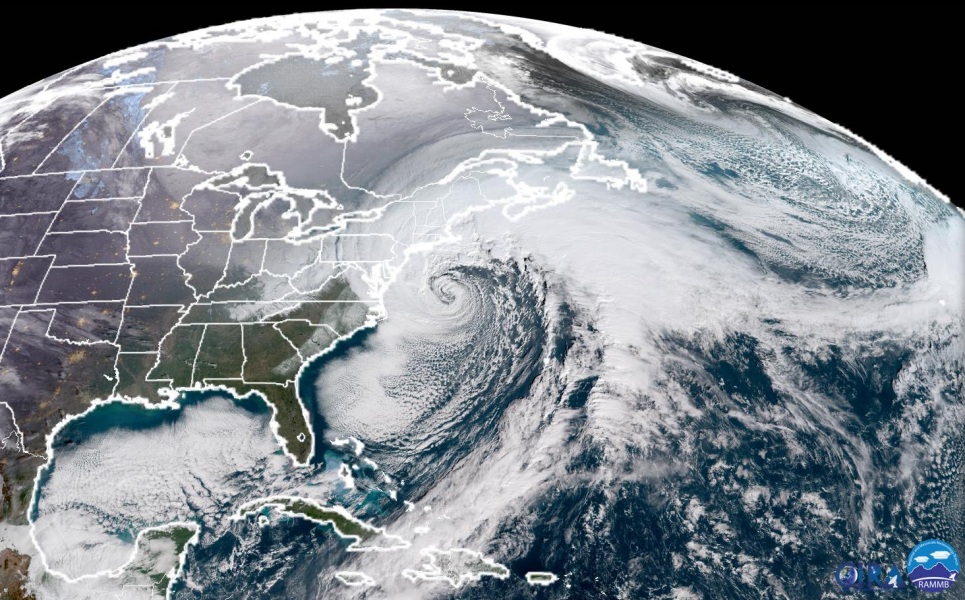 The name Nor’easter comes from the direction of the strongest winds, northeast to southwest in the NW quadrant of the cyclone, where blizzard conditions occur. A Nor’easter develops when deep troughs from the Arctic travel across eastern Canada and advect very cold airmass onto the Atlantic along the east coast, where the main channel of Gulf Stream is located. Such interaction of very cold upper levels over warm waters results in explosive cyclogenesis which means the deepening of the center low is very intense and rapid. When the central pressure drops at a rate of 24 mb / 24 hrs or faster, it is called bombogenesis.

Satellite imagery of the explosive cyclogenesis of the system, as it tracks northeastward off the E coast of the US over the past 48 hours. Images: NASA SPoRT.

The 850 mb temperature anomaly map across N Atlantic, it is revealing very cold mid-levels pushed from the Arctic Canada onto the warm N Atlantic along the US East coast. Notice the strong warm advection of the front side of the system, advecting very warm airmass far north across Nova Scotia.

Satellite imagery of this large winter system reveals some very impressive structure, notice the perfectly cyclonic curvatures of the whole system! The appearance is reminiscent of a tropical cyclone as this system has a band of clouds surrounding the core and even several mesovortices embedded within the core. However, this is a cold core system, as opposed to a hurricane which is a warm core system. Incredible satellite presentation to say the least!

Looking at precipitation maps of such systems, it the area of most severe condition depends critically on the position of the system’s center. The map below shows how intense rainfall will be on the front edge while very intense and excessive snow blizzard will be present on the rear side. This means some areas are and will be receiving a lot of snow and combined with severe or even hurricane-force winds, conditions will be extreme. Whiteouts are expected as well. 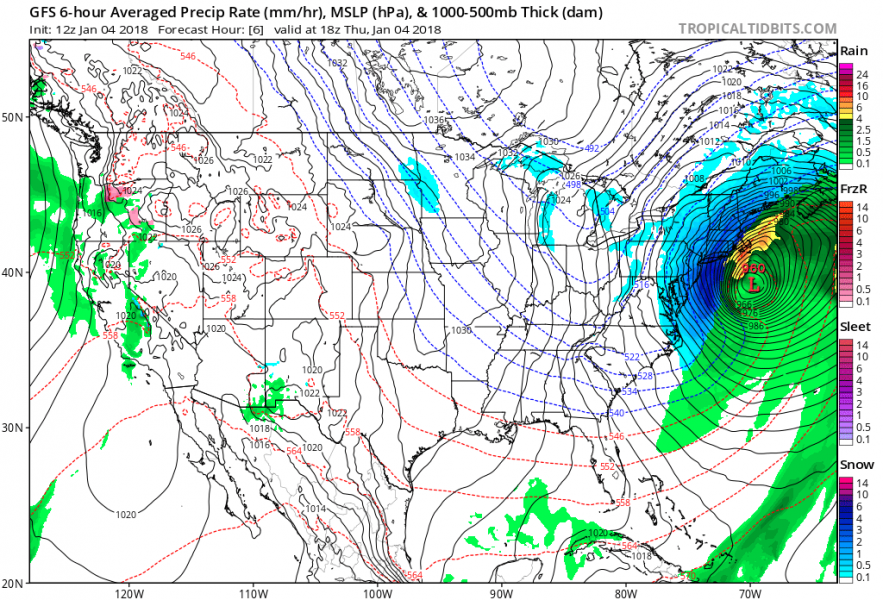 Approximate snow totals from the GFS model (some high resolution models are locally different regarding the expected amounts of snow). It appears likely there will be up to 10-25 inches of snow by Friday evening when storm is over. Based on the latest runs, Long Island seems to get a good pack of snow, as well as Boston, while areas further NE will receive even more.

Spectacular GOES-16 imagery of the enormous nor'easter off the E coast of USA this morning! WOW! Imagery: NOAA pic.twitter.com/0s3Z2H3noL

Satellite imagery of deepening of the system as morning dawns over the eastern US coast. January 4, 2018 by GOES-16 satellite.

More video of #flooding after waves breached a seawall in #Scituate, Massachusetts this afternoon. pic.twitter.com/lRhUJRoUzy

Near #blizzard conditions continue with winds ripping off the bay in Salem, MA on backside of #bombcyclone @breakingweather @accuweather @Brittany_Boyer pic.twitter.com/Y9674MqXZE

BLIZZARD: Salem, MA heaviest snow yet with snowfall rates of 2-3" per hour! Emergency vehicles about. Worst yet to come. #blizzard2018 @breakingweather @AccuRayno pic.twitter.com/HCDFZ5w5a5

As-live from #coastal flooding in #Salem MA at high tide during Blizzard2018. Now winds will ramp up on backside. Coverage for @accuweather @breakingweather pic.twitter.com/7Eph9WREYm

NEW: Coastal flooding at #Salem MA with water, large chunks of ice flowing over the pier. Good think we did not stay at the lighthouse @breakingweather @AccuRayno @Riddle_Lincoln pic.twitter.com/7n10g48aA3

Storm surge inundating the streets of Scituate, MA. (video from Jill Pelo) @NWSBoston says this is getting close to the coastal flooding that was observed w/ the #blizzard of 1978; major impacts & evacuations currently ongoing along the E Coast of MA. #blizzard2018 pic.twitter.com/InOlKbE9Il