The pattern over Europe has changed this week, as the deep trough is dominating the North Atlantic. On Friday, the explosive development of an extratropical cyclone is underway in the Atlantic, with a strong surface depression moving towards Ireland and the UK. An associated surface front will push severe wind squalls and heavy rains into western Europe tonight and on Saturday.

A developing global pattern across Europe and the North Atlantic consists of a large and very deep upper-level trough/low, centered south of Iceland. The low is gradually moving east-northeast into western Europe. 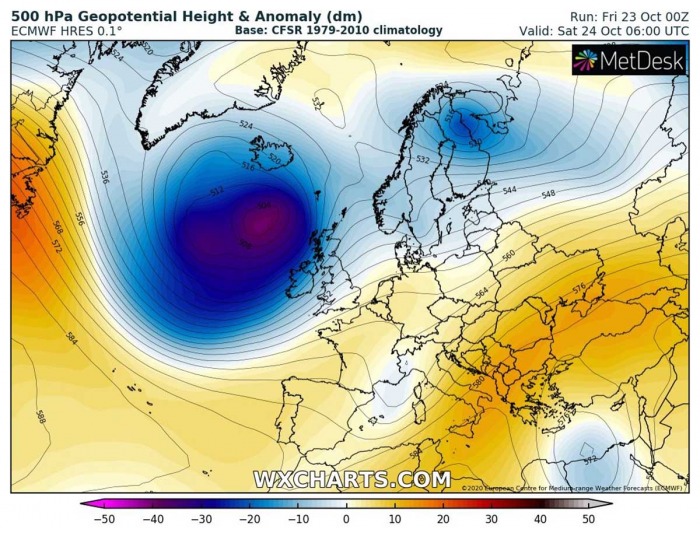 An associated surface low is forming and explosive cyclogenesis is underway this Friday, Oct 23rd. Through loses its strength over the weekend while drifting into western Europe, including the UK, Ireland, and the North Sea. 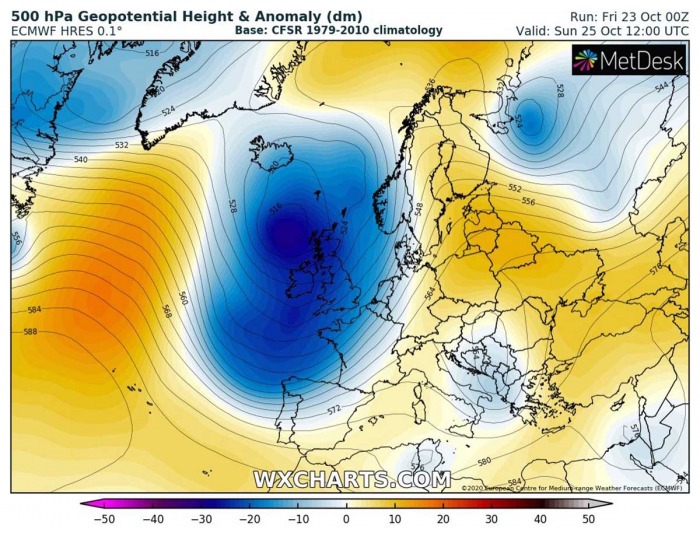 Ahead of this deep trough, rather stable and mild autumnal weather persists across the European continent.

The NOAA Ocean Prediction Center (OPC) reveals a secondary low (extratropical low) forming across the southern portions of the large North Atlantic depression. On Friday morning, Oct 23rd 06 UTC, the low had a central pressure of 983 mbar, located somehow in the center of the North Atlantic.

Based on the NOAA OPC’s forecast, the cyclone is expected to significantly deepen to around 953 mbar over the 24 hours period. That is for around 30 mbar, explosive cyclogenesis was expected. 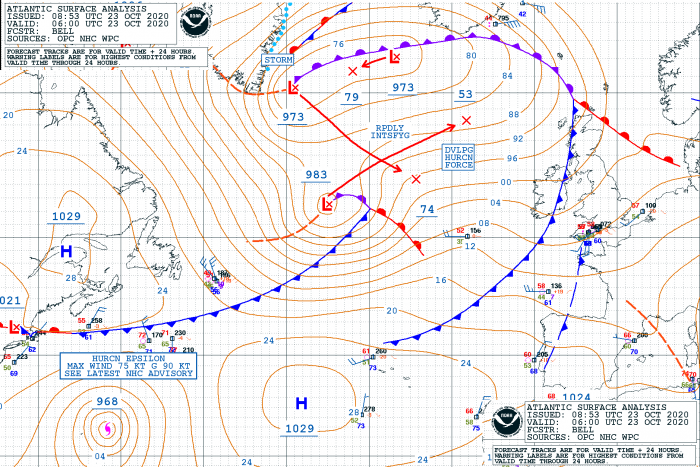 The overall visible satellite image of the North Atlantic is showing the large depression dominating most of the region, with a rapidly developing extratropical low west of Ireland and the UK. A textbook satellite appearance is visible.

Notice also there is a hurricane Epsilon ongoing in the northwest Atlantic as well. 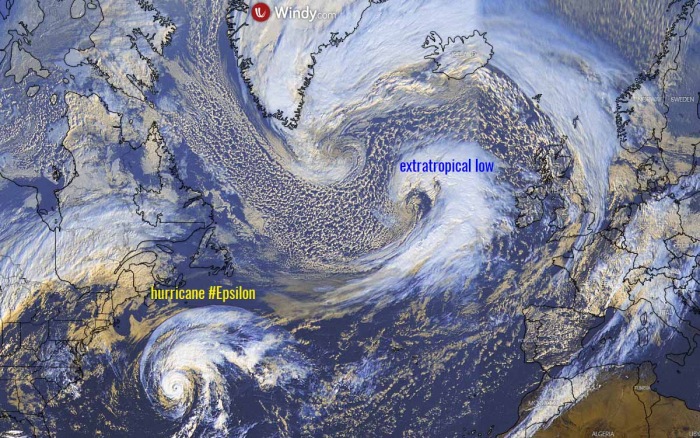 Here is an impressive water vapor satellite image, revealing how rapid development is underway on Friday afternoon. A warm conveyor belt is entering into the core of the low, resulting in rapid deepening central pressure and intensifying winds. The image below is provided by Windy.com. 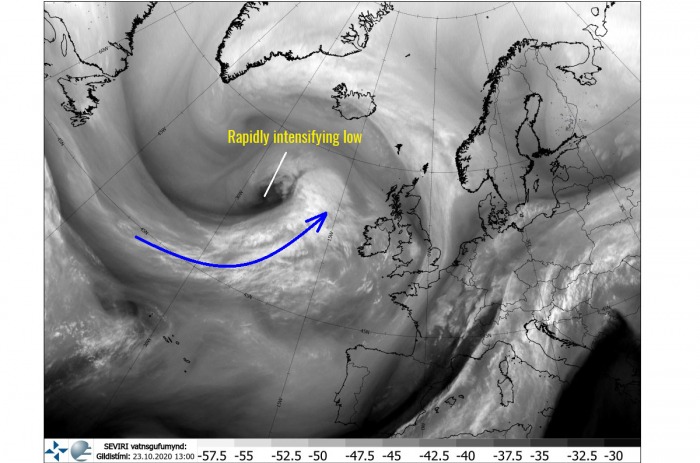 A strong jet stream is rounding the base of the trough, located to the south of the developing low. This is a classic development of an extratropical low over the North Atlantic. The animation below reveals its explosive cyclogenesis evolution:

SEVERE WINDS AND RAIN INTO IRELAND AND UK

The rapidly deepening surface low arrives towards western Europe tonight, with its central pressure already going under 960 mbar. An associated cold front is moving towards Ireland and should spread across the country before midnight. 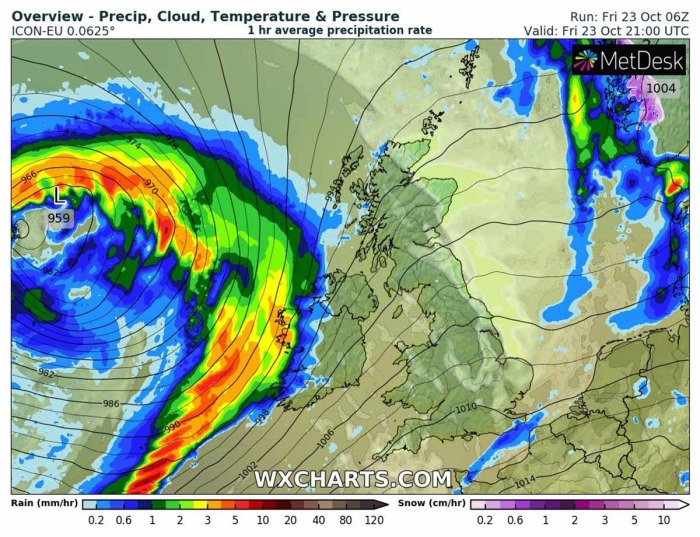 Severe winds along the front could reach 80-90 km/h when reaching the Irish coast, while the strongest winds will remain further west, closer to the exploding surface low. 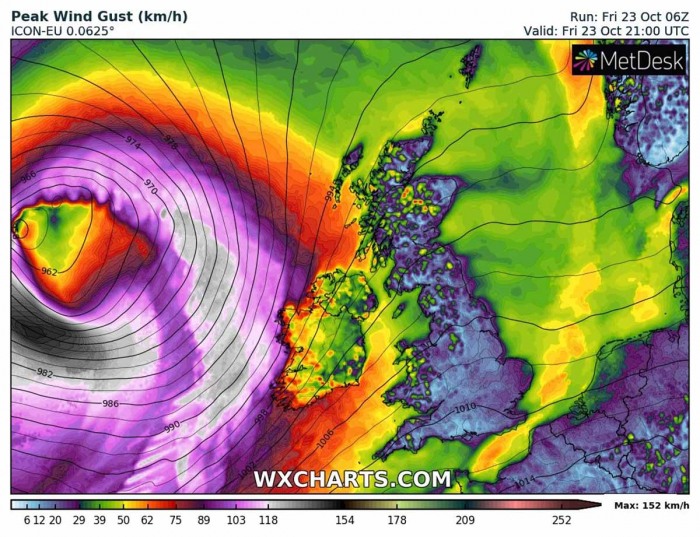 The low continues strengthening and deepening its central pressure up to around midnight. It could reach around 954 mbar at 00 UTC tonight. The cold front continues moving east into Ireland and Northern Ireland through the middle of the night. 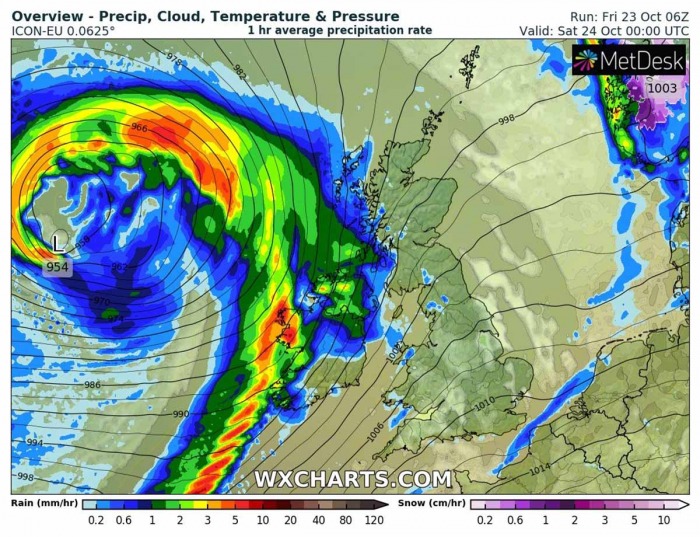 And so will the severe winds around the center of the low, potentially becoming violent with hurricane-force wind gusts. The attached ICON-EU model chart indicates peak gusts could exceed 160 km/h near the center. 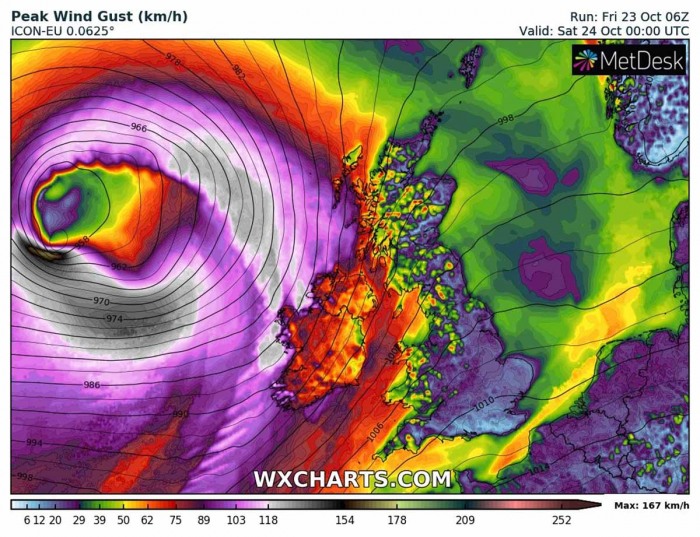 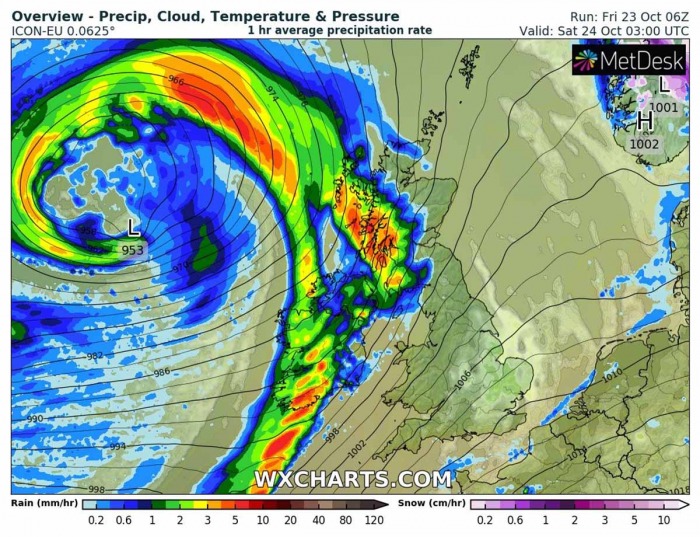 While the winds gradually weakening to the immediate west of the surface front, very intense winds remain closer to the low’s center. Models are hinting gusts up to 180 km/h will be possible. The system could develop a sting jet wind maximum. Severe winds reach western Scotland, peaking to near 100 km/h. 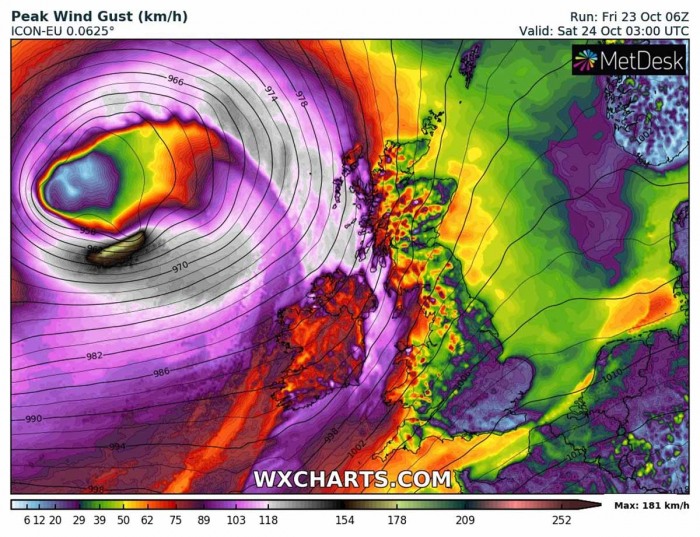 The surface low slows down by Saturday morning and even retreats westward while maintaining its deep central pressure around 952 mbar. Heavy rain squalls will spread across Scotland and into northern England. 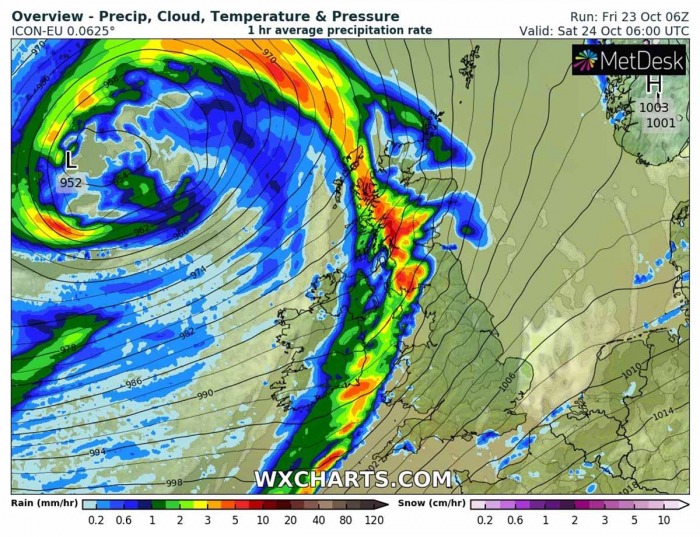 However, the wind field will gradually weaken as the pressure gradient slowly vanishes. But it remains severe closer to the center low, with gusts up to 120 km/h still possible. 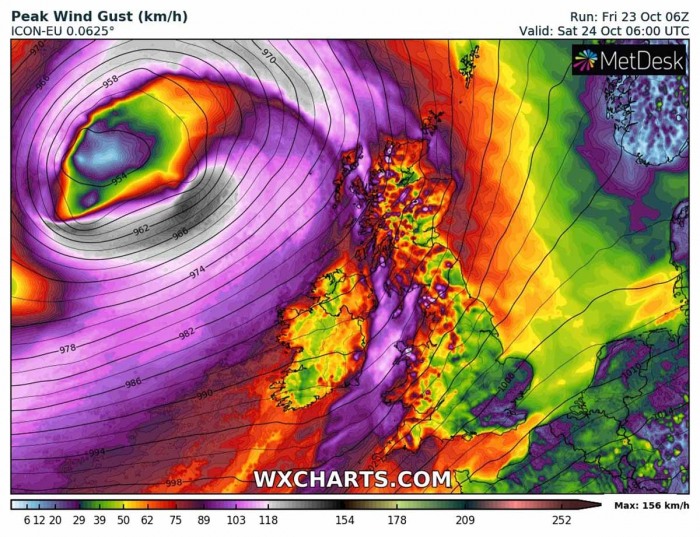 The cold front will continue moving east across Scotland, Wales, and England later on Saturday and reach southern England and northern France on Saturday night.

Here is the peak wind gusts swath chart across the western half of Europe until Monday morning. The strongest winds could reach violent force, potentially 160-180 km/h over the open Atlantic to the west of Ireland and Scotland. 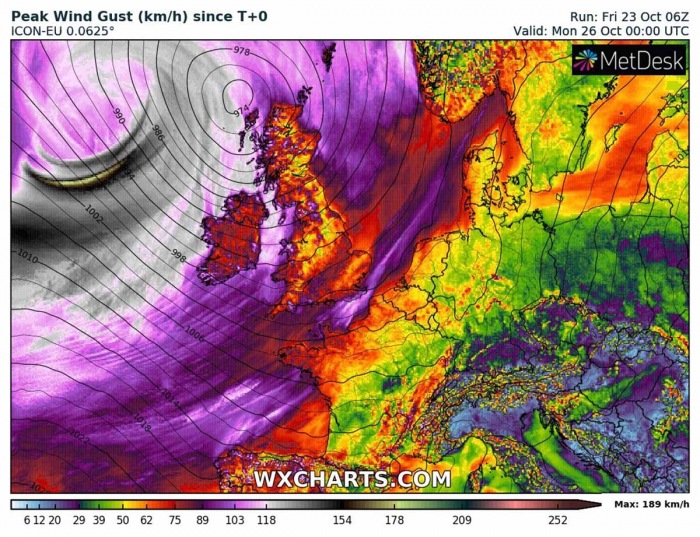 At that time (early Saturday morning), the low will undergo an explosive deepening and a narrow swath of very intense winds could develop to the immediate south of the center.

As the whole North Atlantic depression is very large and its field is broad, major waves will be generated. Significant wave heights could reach 6-10 meters over the open North Atlantic, 5-6 meters closer to the western coasts of Ireland, Northern Ireland, and Scotland. 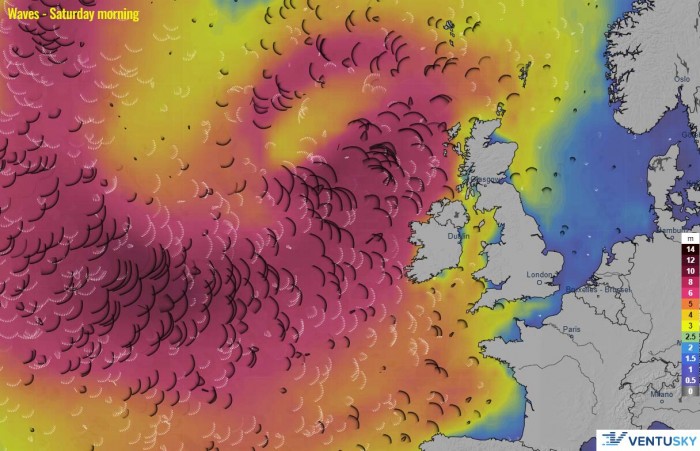 High waves will also be pushed towards the Faroe Islands. The above image is for Saturday morning, October 24th.

Although the rainfall amount is not expected to be particularly high, quite a lot of rain is likely where the orographic features will be maximized. That is across the higher terrain of Wales, northwestern England, Scottish Highlands, and along the western Ireland coast. 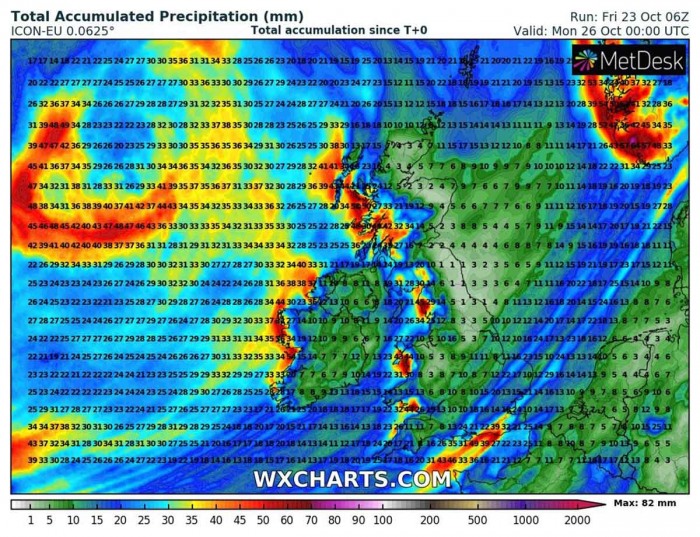 Locally 60-80 mm of total rainfall could accumulate until Monday morning. It could locally result in high river levels, but flooding potential is minimal.

There is another, more concerning feature of interest after this weekend’s North Atlantic depression is over. The currently ongoing hurricane Epsilon in the northwestern Atlantic will undergo an extratropical transition and head towards Europe.

Global models are hinting a very powerful extratropical cyclone could form on Monday and head towards the UK and Ireland on Tuesday. Major waves and destructive hurricane-winds will be possible.

We are closely monitoring the evolution of the North Atlantic activity and will keep you updated in the coming days – stay tuned!