A former bombogenesis along southeast Canada is moving across the North Atlantic, brings more rain and flooding threat into parts of the UK and Ireland through this week

We have been following an explosive development of a cyclone along the East Coast on Saturday, it has passed near Newfoundland and introduced an intense blizzard there. Now, the system is moving across the North Atlantic and expected to develop a favorable pattern for persisting rains into the UK and Ireland this week. This could enhance flooding potential in some areas. Most rain is expected across Wales, northern England and Scotland.

NEW UPDATE: A deep low-pressure system brings gale-force winds across UK and Ireland on Thursday, followed by an Arctic outbreak into northern Europe on Friday

A deep low-pressure system brings gale-force winds across UK and Ireland on Thursday, followed by an Arctic outbreak into northern Europe on Friday

This evening, the central pressure was around 977 mbar, while the system is located east of Newfoundland where the blizzard was ongoing since yesterday. Conditions are improving over the island. With the deepening of the upper trough, the surface cyclone is expected to intensify tonight into Monday morning, likely to push its central pressure below 970 mbar again. Here is the pressure data over the North Atlantic since system’s birth on Friday: 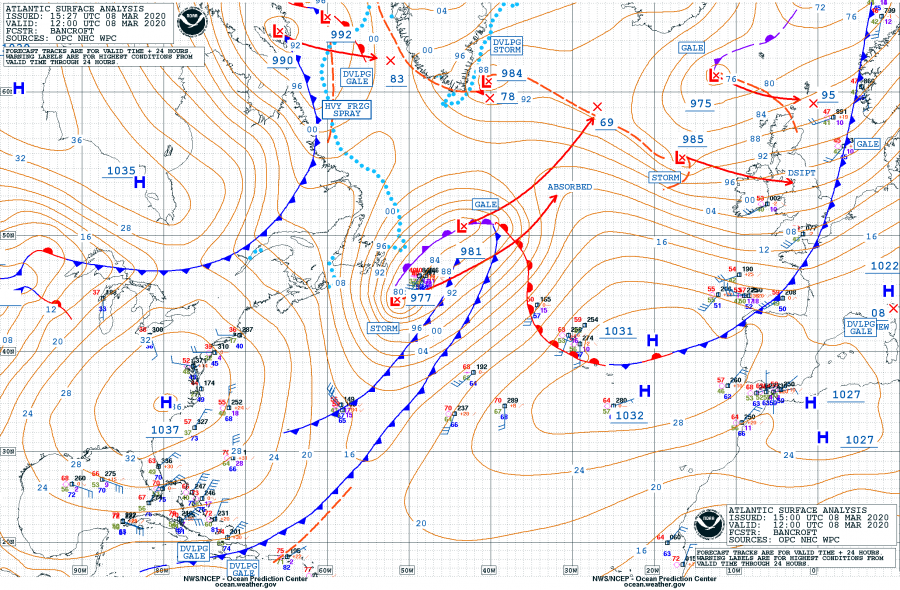 We can see this new system ejecting from the Northwest Atlantic is quite large, moving northeast. The core will turn northwest while occluding late tomorrow. The main wind field will spread towards western Europe. Notice also a smaller cyclone along the southeast tip of Greenland. 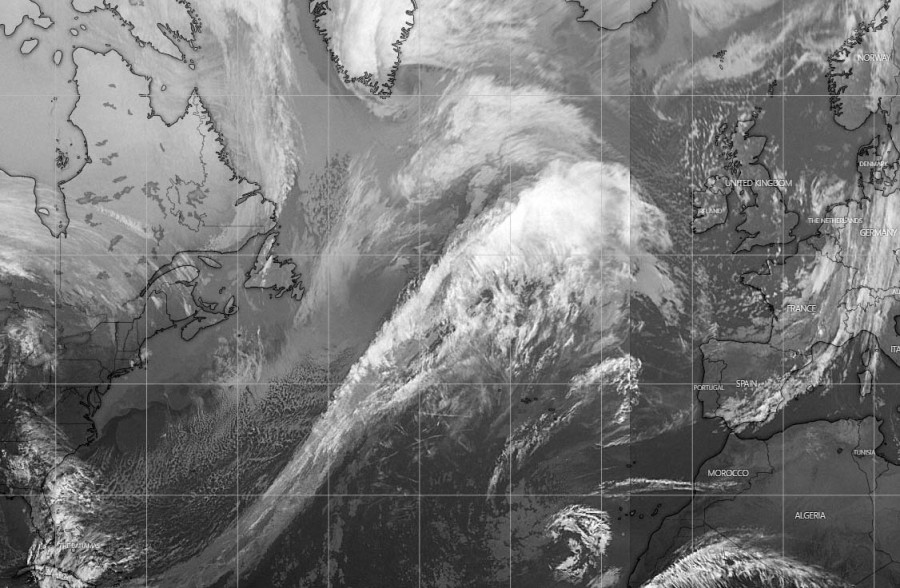 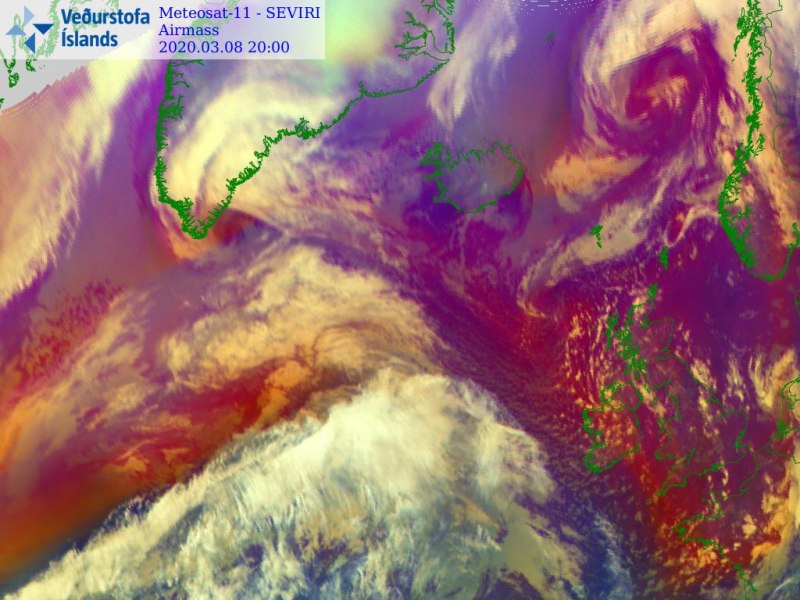 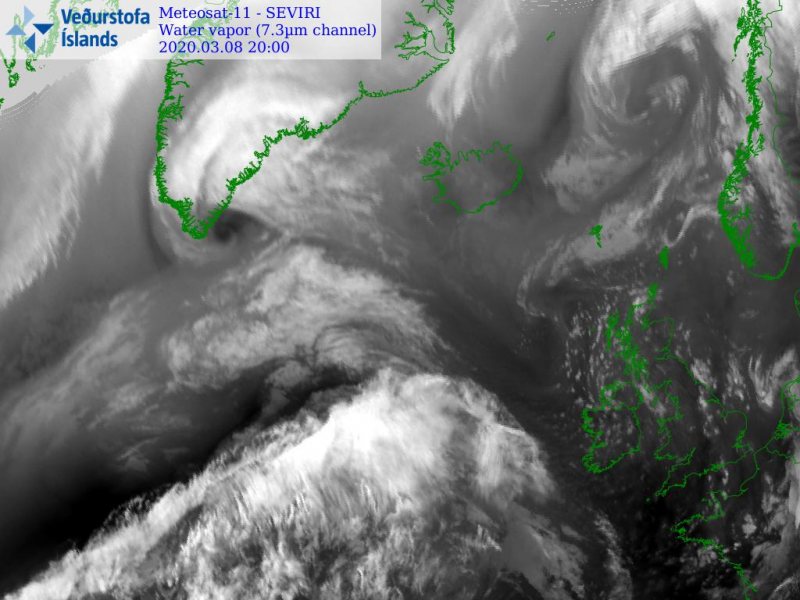 The overall pattern over Europe through the first days of the new week reveals a strengthening ridge from the Azores across the southern half of Europe. While to its north, deep trough again strengthens over the North Atlantic and push into western and northern Europe. 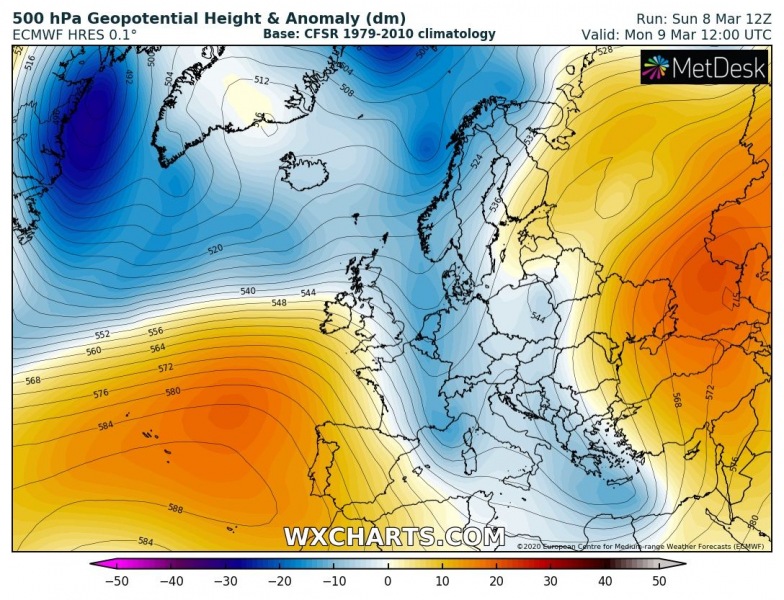 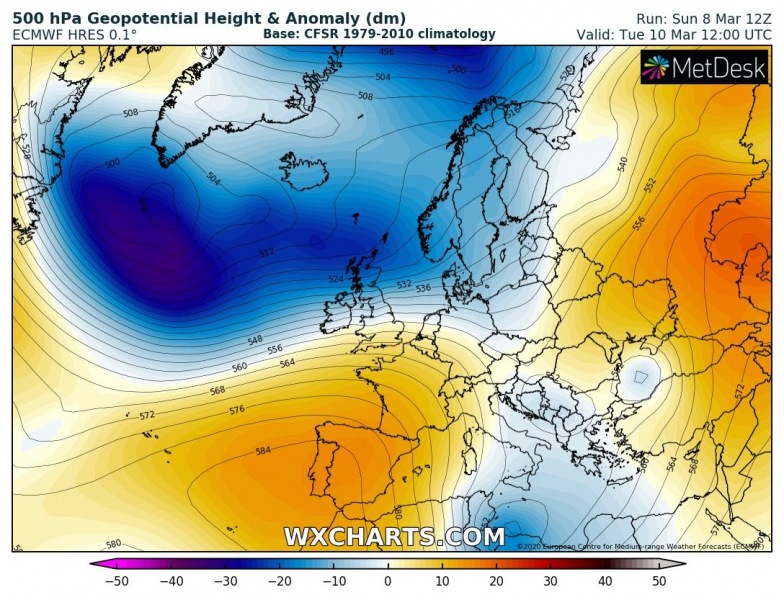 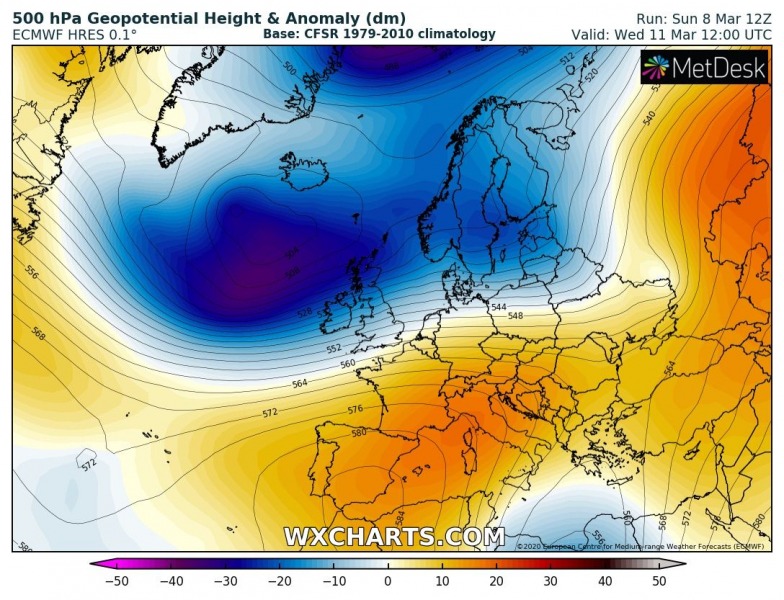 Here is the 12-hour sequence of peak winds and surface pressure from Monday until Wednesday morning. The cyclone continues northeast tomorrow while occluding towards Iceland on Monday’s night, turning northwest. Strong to severe winds spread into western Europe. The low near Greenland maintains its deep core. On Tuesday, both cores merge and start moving towards western Europe on Wednesday. 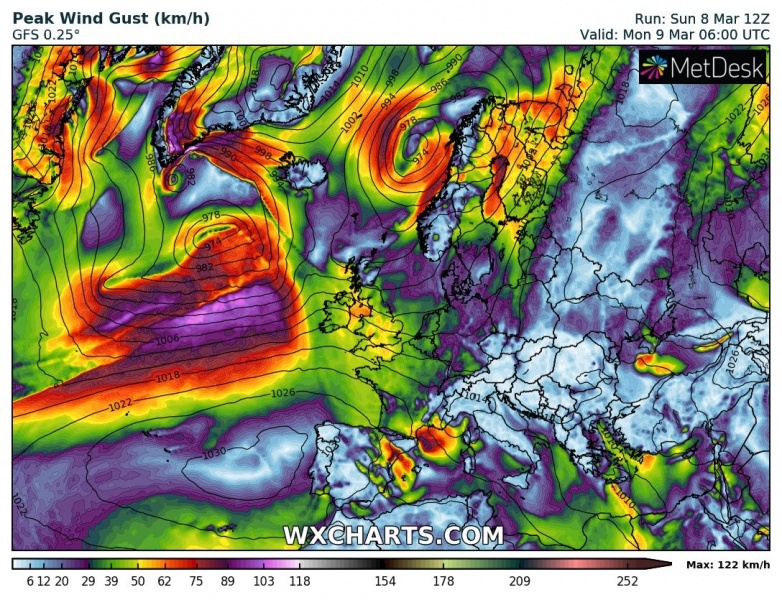 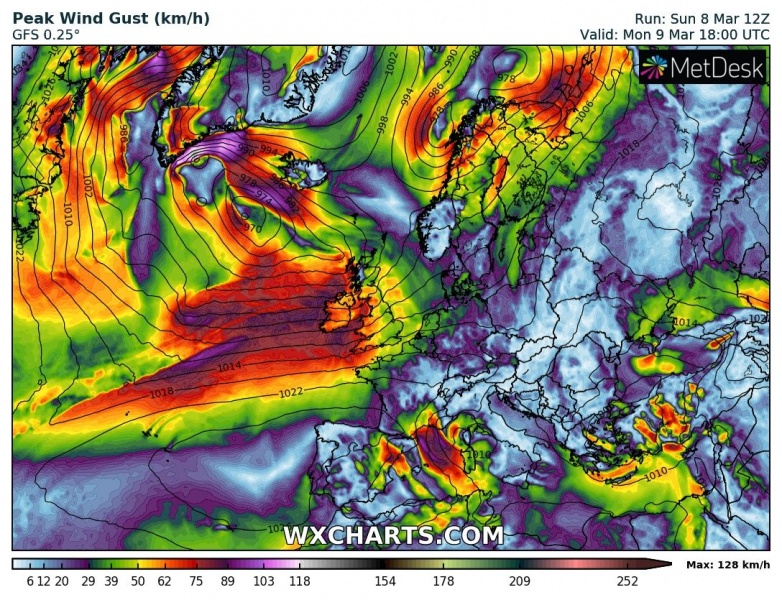 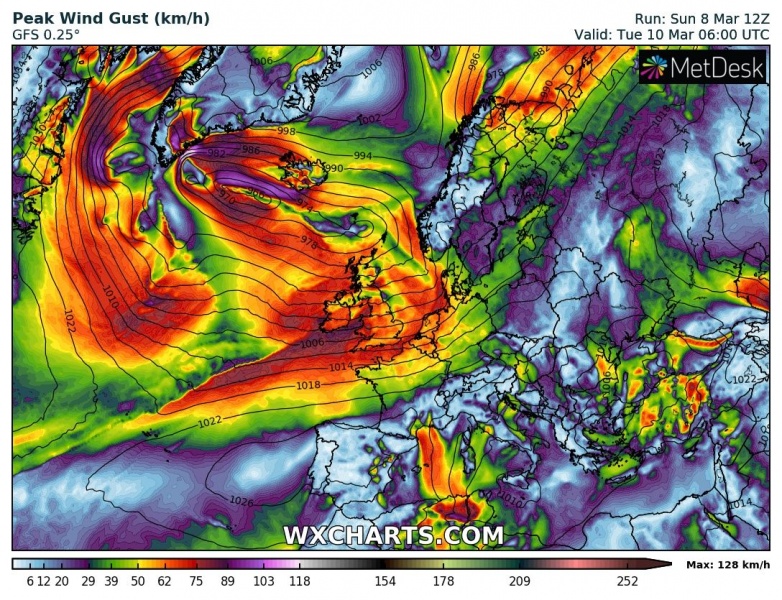 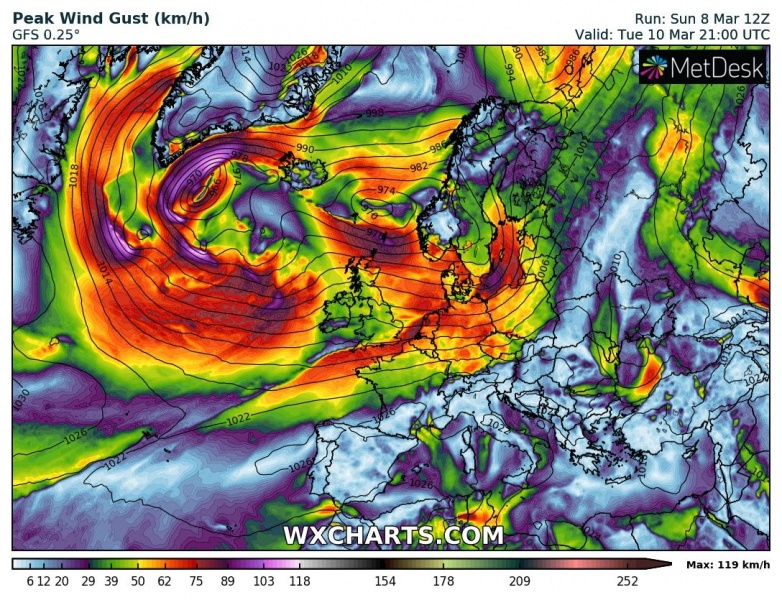 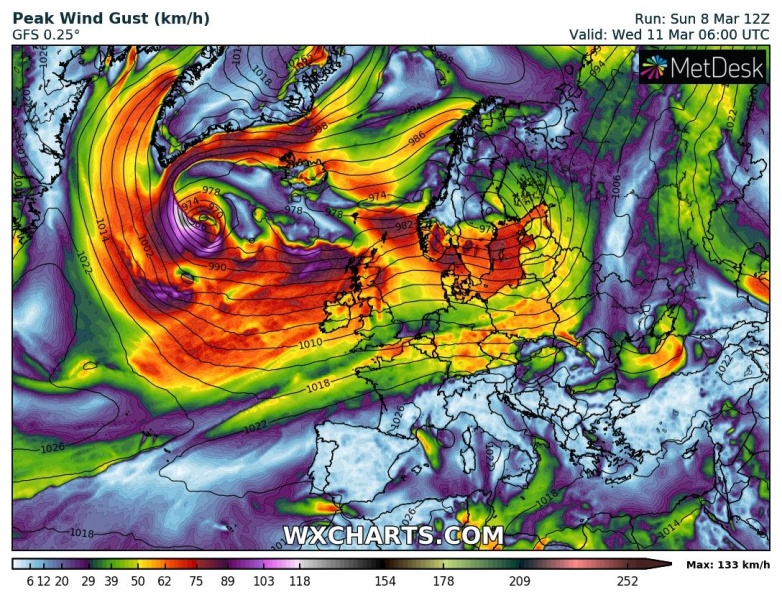 The persistent westerly flow will enhance orographic precipitation along the mountain ranges and lead to locally 120-150 mm of rainfall until Wednesday night. Especially across Wales, northern England and Scottish Highlands: 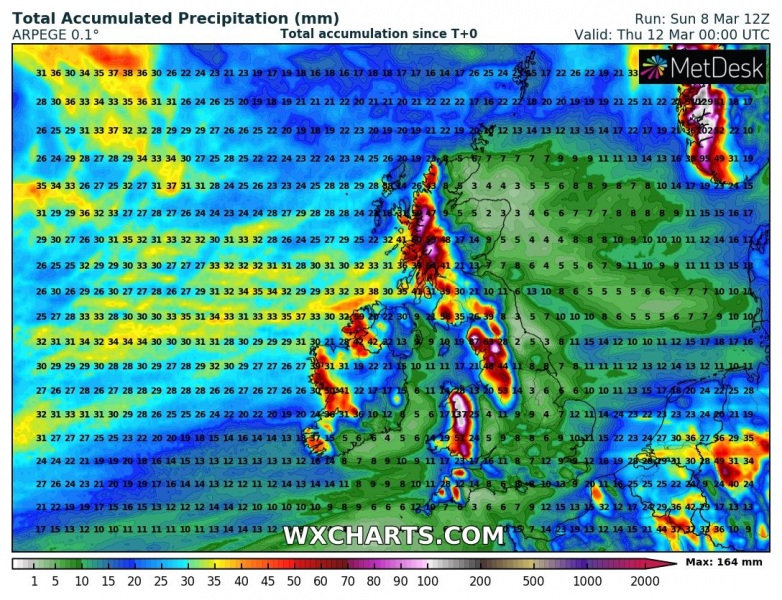 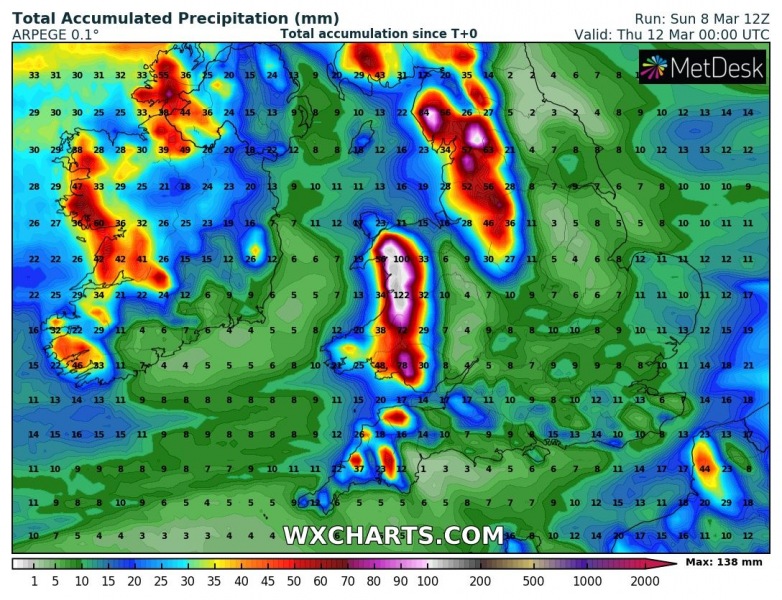 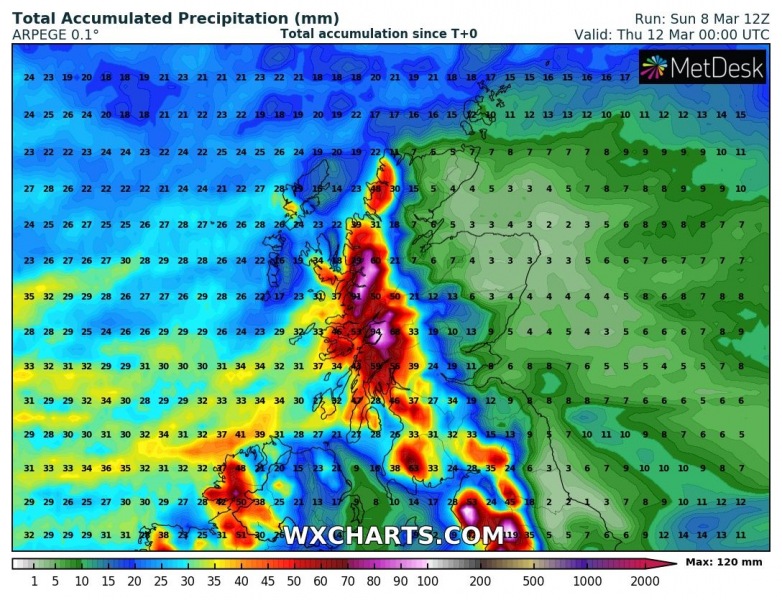 A deep low-pressure system brings gale-force winds across UK and Ireland on Thursday, followed by an Arctic outbreak into northern Europe on Friday

Please refer to the primary forecast for further mesoscale details on the event: