North Atlantic in its full majesty this season. Yet another violent extra-tropical cyclone took place last night, with a remarkably rapid intensification. The system became an intense bombogenesis while its center went over the Gulf Stream, this likely lead to the impressive rate of intensification last night. With 21 mbar pressure drop in 6 hours and 29 mbar in 12 hours! This is likely the most intense this winter season. The cyclone has peaked this morning, but is now growing in size and expected to deliver intense winds and blizzard across Nova Scotia and Newfoundland tonight and tomorrow morning.

This system undoubtedly deserved a name bombogenesis! Its intensification rate was exceptional last night. The central pressure change between March 6th 18 UTC and March 7th 06 UTC (12 hours period) was a remarkable 29 mbar, not to mention the pressure drop of 21 mbar in only six (6) hours between 18 UTC and 00 UTC! As of this evening, 18 UTC March 7th, the central pressure is 968 mbar and gradually rising. The system has peaked in the local morning time: 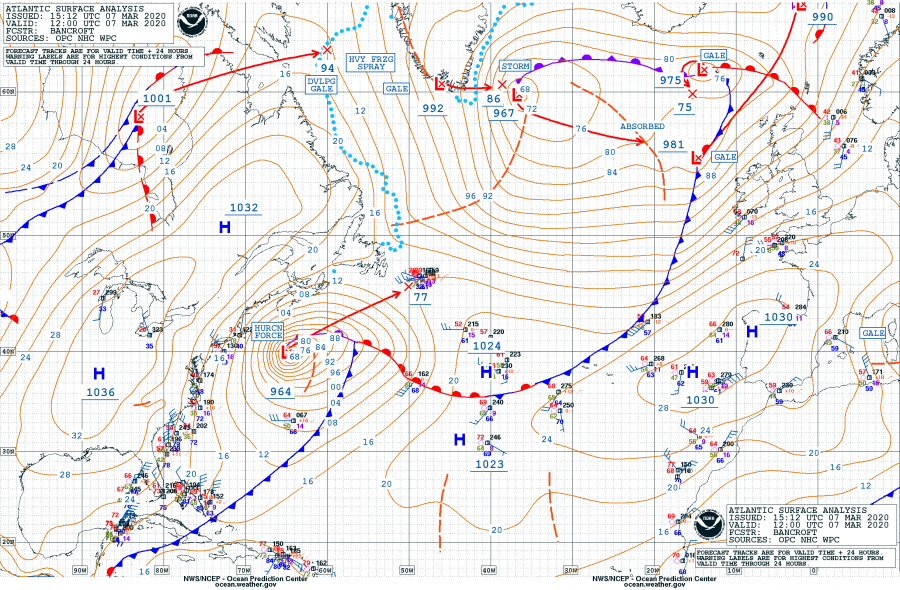 Note: The system is actually connected with the frontal boundary with the huge North Atlatic cyclone further north.

Satellite presentation of this bomb cyclone is really impressive! The system’s small core did show an eye-like appearance for several hours, at the peak of its intensity this morning. A lot of cold air mass is advection behind the main cold front, across the eastern US into the Northwest Atlantic. The cyclone showed a classic warm seclusion structure, pefectly visible on the airmass channel – see the dark red region: 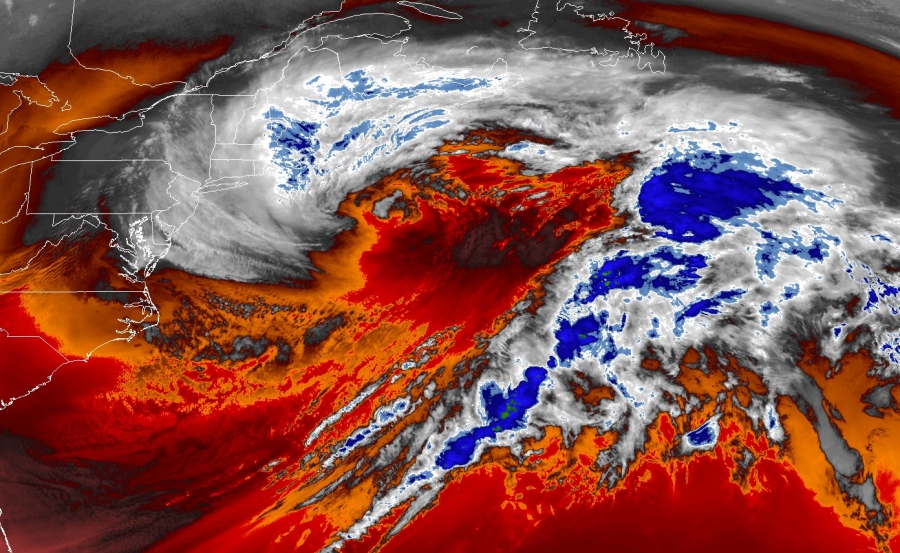 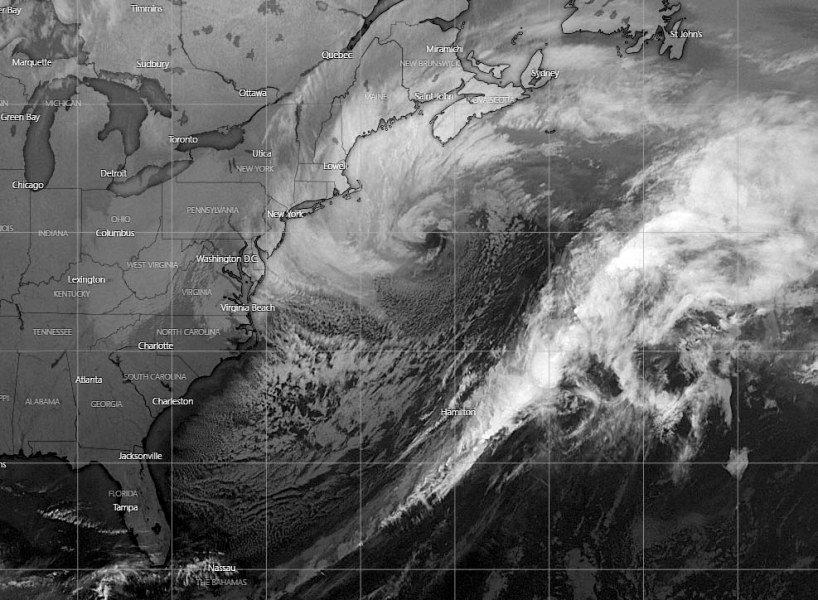 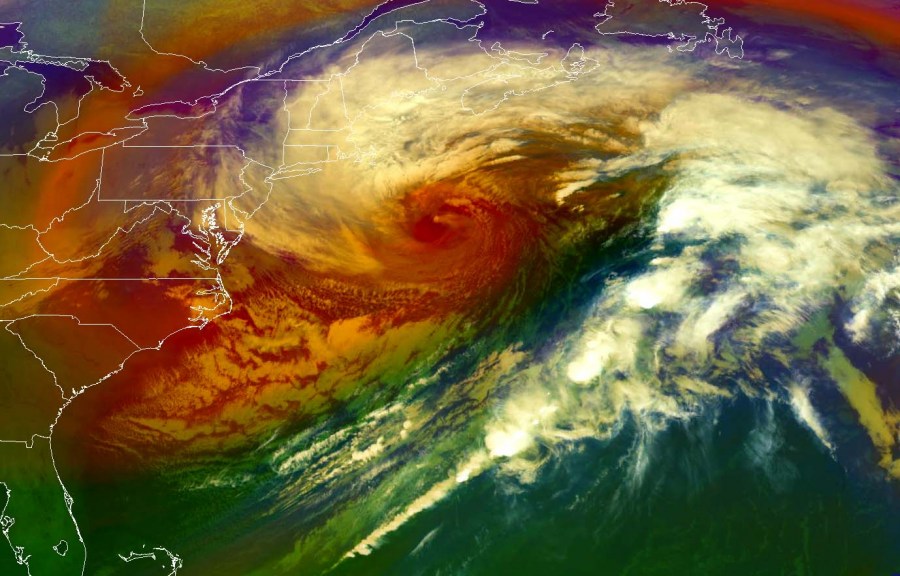 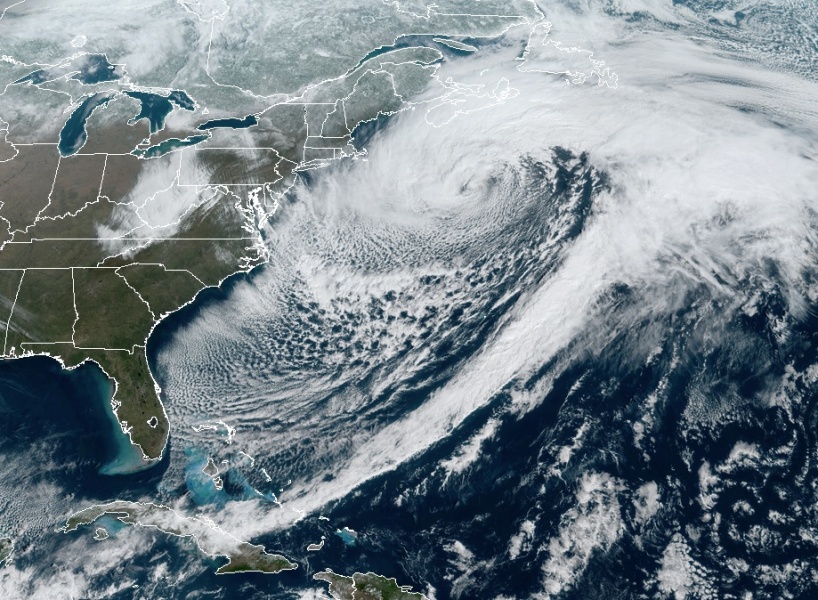 And then boom goes the #bombogenesis pic.twitter.com/P8NAwd9Y1W

A tour of the #cyclone 👀 pic.twitter.com/k1qpC6yx7J

Here is the close-up satellite view of the cyclone’s core. See the details of convective bands waves on the north side of the bombogenesis last night: 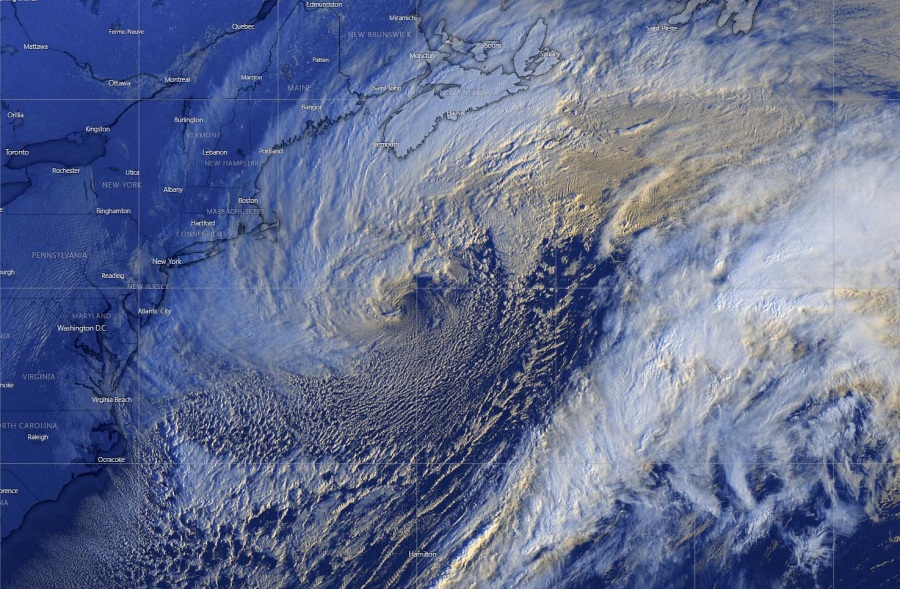 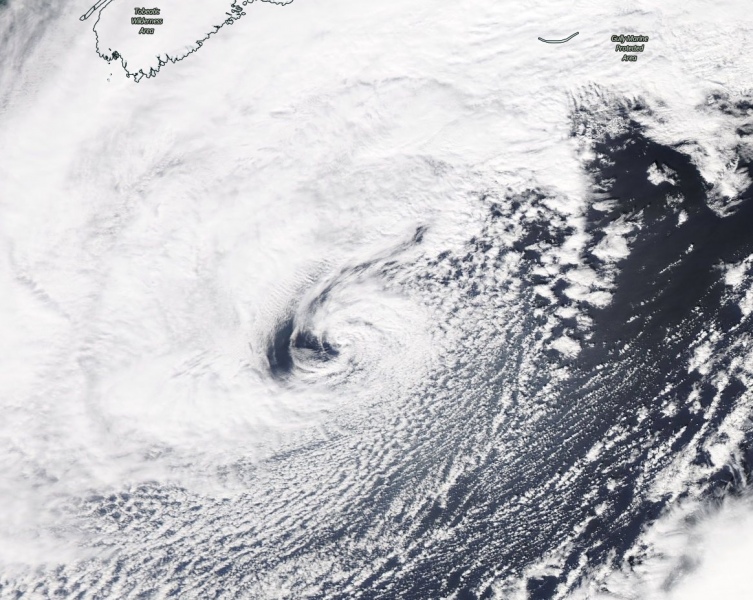 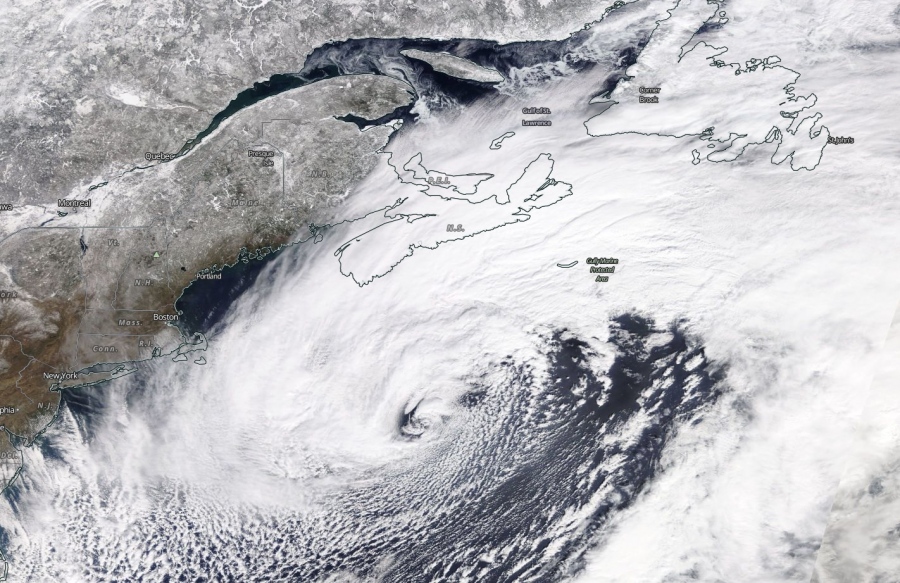 Wavy convective bands on the north side of the #bombogenesis pic.twitter.com/Mb7LOawsP6

Although the central pressure is now weakening, the system is growing and its wind field is still very intense. The core continues northeast and will be passing just south of Nova Scotia and Newfoundland tonight and on Sunday morning (tomorrow). It is still expected to introduce intense winds and blizzard over the region: 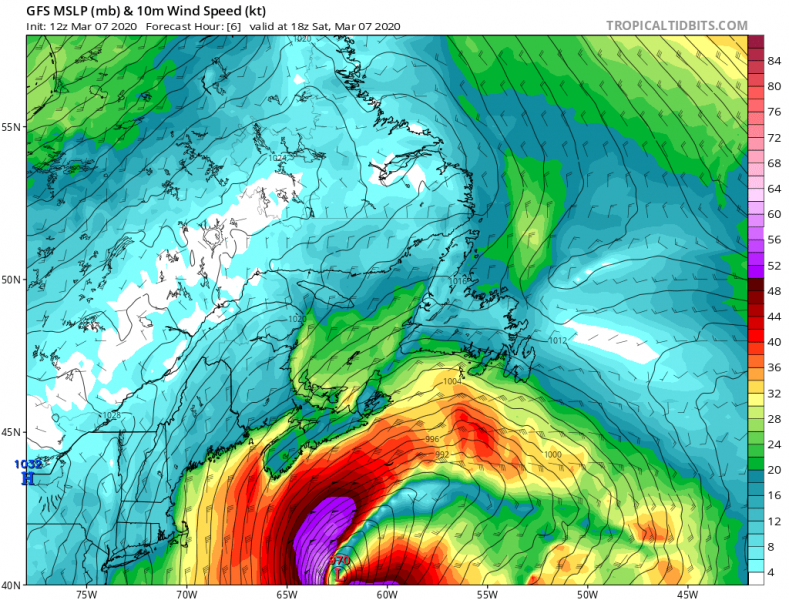 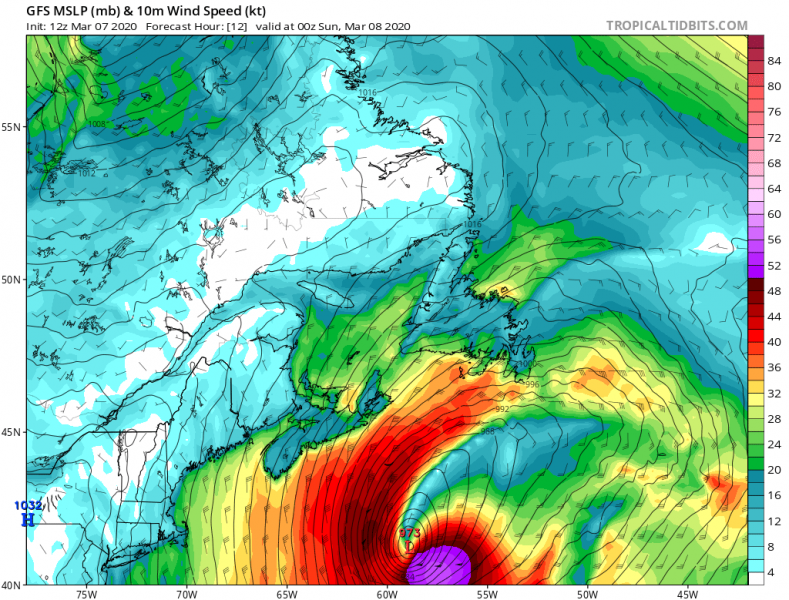 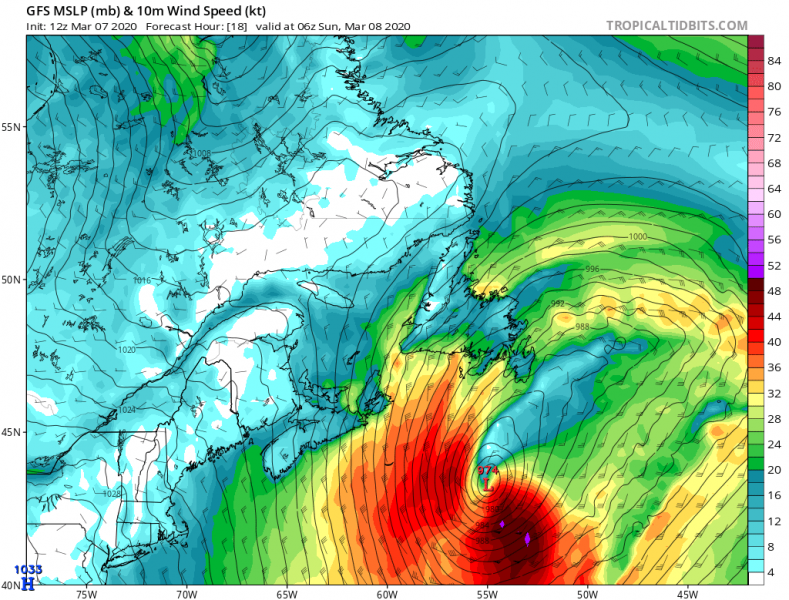 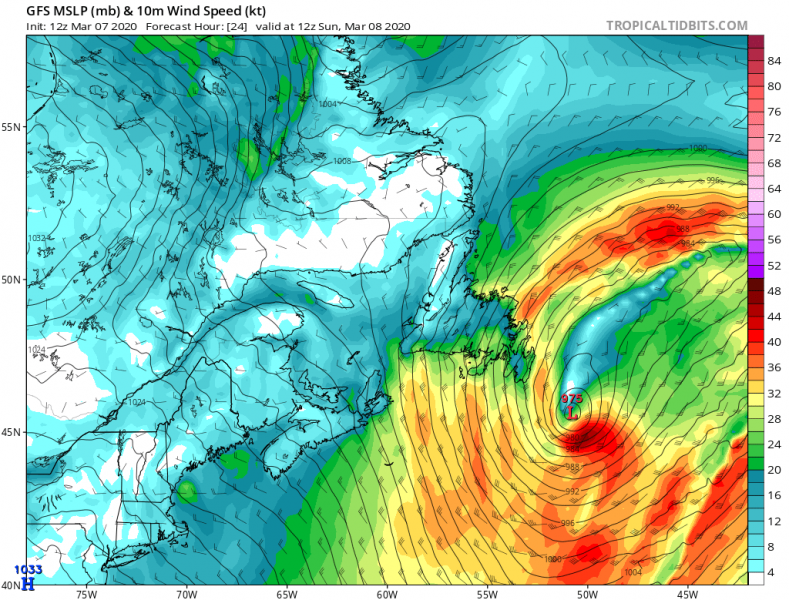 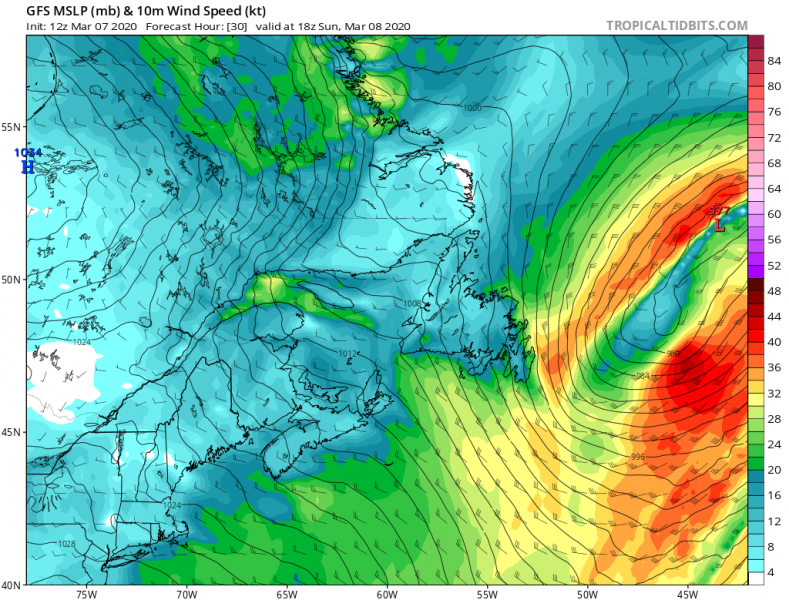 Please refer to the primary forecast discussions for further details: