The pronounced surface low and a frontal system is moving across the south-central United States this Wednesday, revealing an impressive satellite appearance of the occluding cyclone. The system will eject off the Southeast US on Thursday, so the Thanksgiving Day weather will be nice and mild for a large part of the country.

The typical travels for Thanksgiving Day this year are expected to be less frequent than a normal year, as the coronavirus pandemic is again worsening across the country.

A pre-Thanksgiving storm system is racing across the south-central United States this Wednesday, moving east. The satellite presentation is pretty spectacular, with a textbook occlusion of the mid-latitude cyclone. An impressive dry conveyor belt is wrapping into the core of the low, now moving into the Southeast United States. 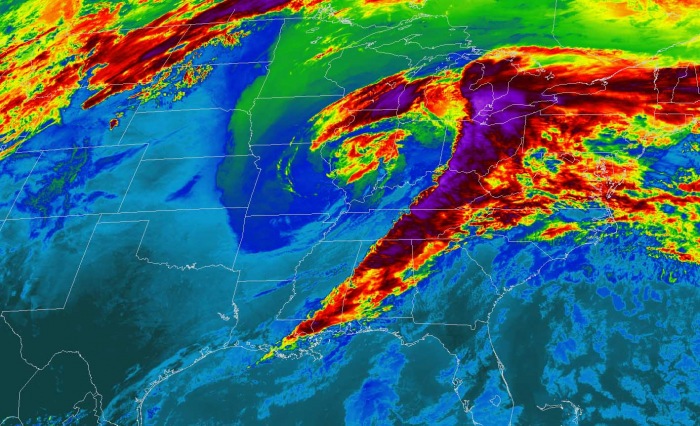 The system with an associated cold front will continue moving towards the East Coast on Thanksgiving Day and eject the Atlantic coast by Thursday afternoon. Isolated strong to severe thunderstorms will be possible across the southeast and over the lower Ohio Valley through Wednesday night.

Unsettled weather with rainy periods and heavy mountain snow is forecast to continue across the Northwest, as well as a lot of gusty winds.

A departing frontal system will occasionally limit some outdoor activities across the Southeast United States, the Gulf Coast, and the East Coast for Thanksgiving, however. But the rest of the country will enjoy nice weather for the Thanksgiving celebration.

So, for the 2020 Thanksgiving Day, the weather looks to bring milder-than-normal conditions in many areas across the United States.

On Wednesday, the surface low has undergone the textbook occlusion. The frontal system continued to move across the Mississippi Valley and further east into the Dixie Alley and towards the Southeast United States. 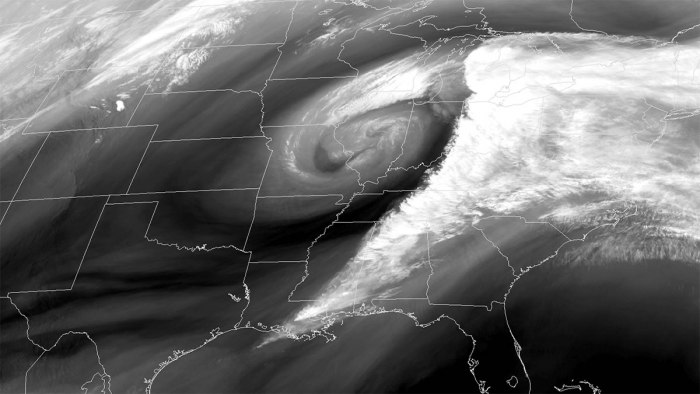 Attached below is the visible satellite scan of the low, provided by Windy.com. The cyclone has been centered over Missouri in the Wednesday morning hours, with the cold front extending from central Illinois south-southwest towards Mississippi and Louisiana’s Gulf Coast.

A well-defined line of storms has been observed by both satellite and radar imagery. Here is a quite spectacular water vapor satellite animation of the occluding low:

As we can see from the radar scan below, storms are mainly ongoing along the pre-frontal line, extending from northwest Alabama towards southwest across south-central Mississippi and southern Louisiana.

We can also see a nice cyclonic curvature of the occluding frontal clouds further north across the Midwest. 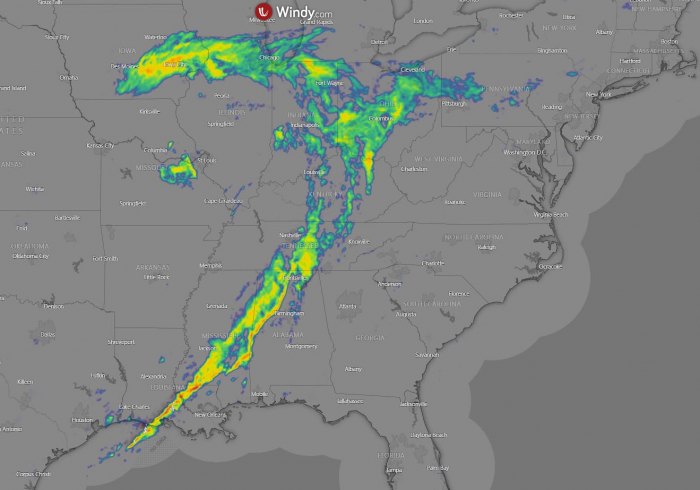 Radar image of the cold front. Image provided by Windy.com

In the wake of the frontal system, some snow has also verified across western Kansas. A few inches of snow (2-5 inches = 5-12 cm) has been reports by the National Weather Service in Dodge City, KS. Some fresh snow has also been observed across the High Plains of eastern Colorado.

Zoomed-in visible satellite scan below reveals these patches of snow in Colorado and Kansas. We can also see a well-defined surface low over the Mississippi Valley and the associated surface front moving into the Southeast United States.

Quite some fresh snow has also been reported from the central Rocky Mountains.

The upper wave with an occluded surface low continues moving east across the Mississippi Valley on Wednesday. An upper-level blocking pattern is building up in the low’s wake, ahead of a new Pacific depression moving into the Northwest United States. 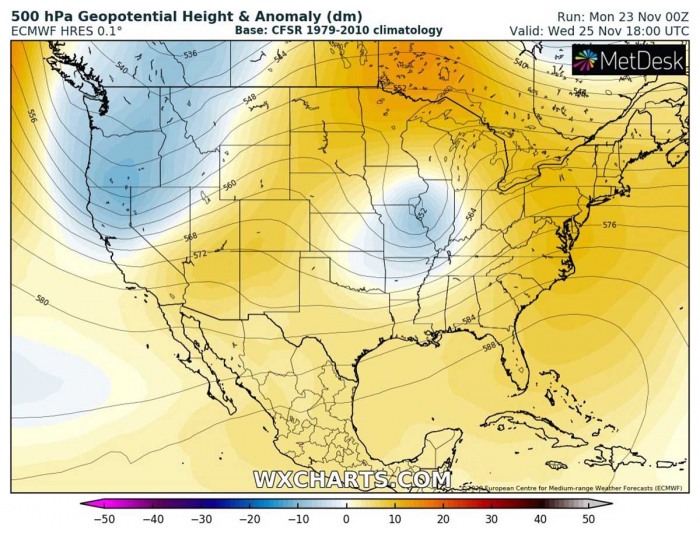 The center of the surface low will move further northeast towards Iowa and Illinois through the afternoon and evening hours on Wednesday. This will allow the surface front to push further east across the Southeast United States. 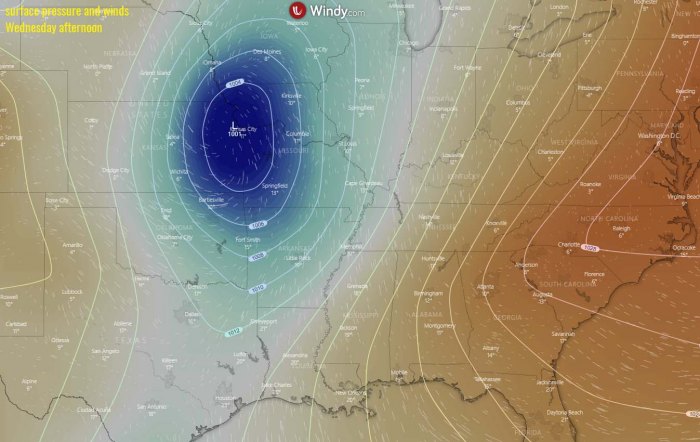 The surface pressure on Wednesday. Image provided by Windy.com

A combination of strong jet rounding the base of the low and a subtropical jet stream will develop a strongly sheared environment across the Lower Mississippi Valley and into the Southeast United States, while some marginal instability will be present across the warm sector in front.

This should allow some severe weather to develop also through the evening hours and tonight. For this reason, the Storm Prediction Center (SPC) has issued an MRGL (Marginal) risk for southeast Louisiana to central Alabama and northwest Georgia and also across the lower Ohio Valley. 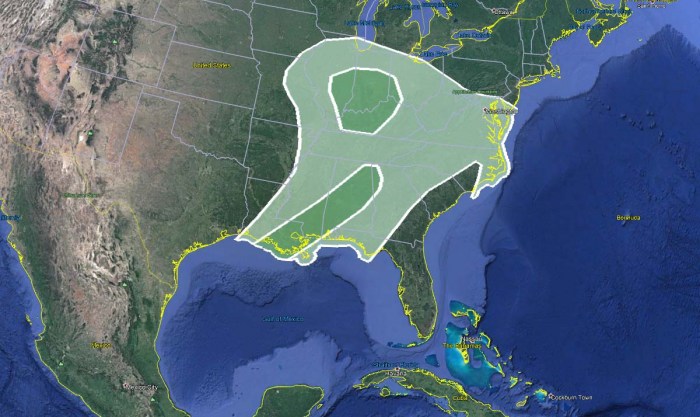 Here is a brief discussion from the SPC for both areas with the MRGL risk levels:

A narrow zone of surface heating/destabilization and boundary-layer dewpoints in the upper 50s is expected on Wednesday afternoon from southern IL into southwestern IN and western KY, southeast of the surface cyclone. Though surface-based buoyancy will remain weak, vertical shear will be favorable for a low-end threat of low-topped supercells or short line segments capable of producing isolated damaging winds and perhaps a tornado.

A pre-frontal squall line is moving eastward across the southeast United States. The influence of this ongoing convection will likely limit the potential for destabilization this afternoon, mainly to the north of the front. The ongoing convective band will shift slowly eastward, with some low-level moistening/destabilization possible into central Alabama.

Deep-layer and low-level vertical shear/helicity will tend to weaken through the day from southwest-to-northeast as the primary synoptic wave passes to the north over the Ohio Valley. Still, some low-end potential will remain for line segments and embedded supercells capable of producing isolated damaging winds and a tornado or two.

Storm activity should gradually diminish overnight to Thursday (Thanksgiving Day), as instability vanishes with the arrival of the cooler night hours.

The afternoon temperatures will climb into a pleasant high 60s to near 70s across Texas to Louisiana, Mississippi into the East Coast. And mid to upper 70s across Florida. The Mid 60s in Oklahoma, mid-40s to low 50s in Kansas and Nebraska. 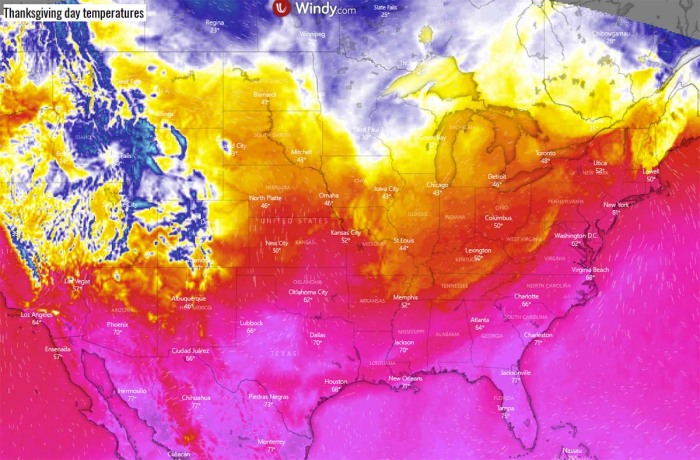 Colder weather with temperatures below freezing are likely across the far northern North Dakota, Minnesota, and also across part of the Northwest. It will be colder also over the Rockies where temperatures are forecast to be seasonably cool, with the mid-30s to 40s for most of the Intermountain region.

In between, mild weather is expected with near-zero chances of precipitation. Therefore, the weather looks to bring milder-than-normal and dry conditions in many areas across the United States, being favorable for Thanksgiving activity.

Only the far southeast United States, the East Coast, and the Atlantic coast will see some rain with a departing frontal system off to the east. Mostly cloudy and perhaps showery weather is forecast from central Georgia and the Carolina Coastal Plain to the Atlantic coast.

Thanksgiving Day temperatures will be colder than average across the West Coast and the Northwest United States, as the influence of the new North Pacific depression will bring the temperatures down. It will be also snowing in western Montana and Idaho.

The frontal system over the Southeast United States on Thursday will disturb the outdoor plans on Thanksgiving Day there, while the rest of the country will enjoy a nice and mild day.

It will be quite windy and very warm across California for Thanksgiving, as the Santa Ana wind pattern will develop. Fire risk will be elevated.

>>An intense bombogenesis with rapidly deepening pressure is underway over the Labrador Sea tonight, massive waves will head towards Iceland on Thursday<<