Another deep cyclone will bring severe winds into the Bay of Biscay and huge waves along the coasts of NW Iberia tomorrow, Friday Feb 1st

Yet another deep trough and cyclone are on the way towards SW Europe today and tomorrow. A large cyclone with central pressure around 970 mbar is tracking southeast across the north Atlantic and is expected to result in severe to extremely severe winds along its track, as well as developing significant waves up to around 10 m high along the coast of NW Spain and WNW Portugal.

The pattern supporting the evolution of this event indicates a new deep trough across the eastern Atlantic and SW Europe tonight, resulting in a deep cyclone moving across the Bay of Biscay towards France. 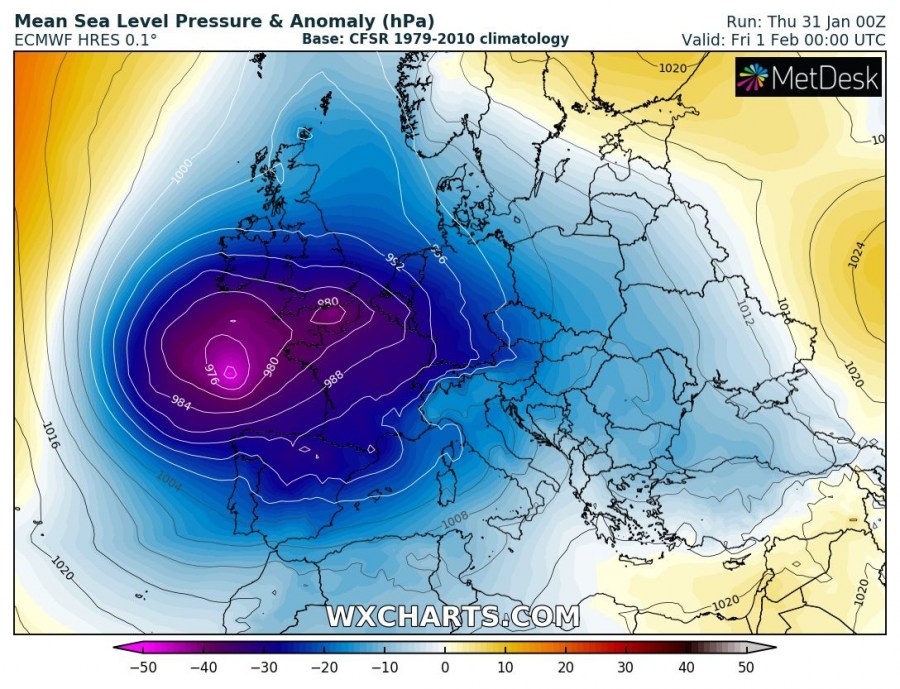 Here is a 3-hour sequence of wind gusts associated with the cyclone tracking from the eastern Atlantic today until tomorrow evening when it ejects from the Bay of Biscay. Locally severe to extremely severe gusts are expected. Notice the widespread extent of severe gusts on its western side, supporting the development of significant waves towards the NW Iberia. 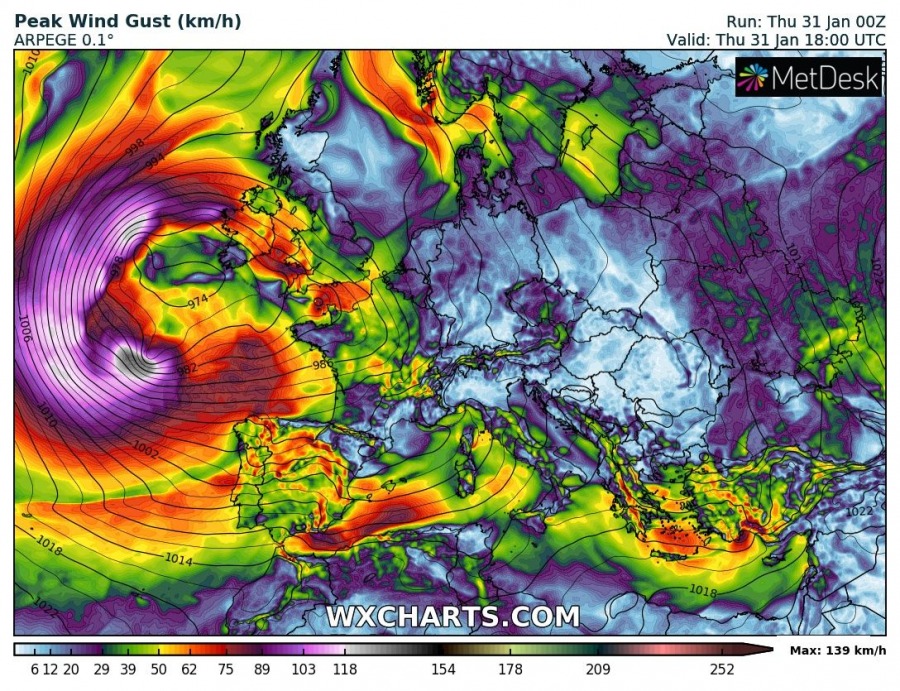 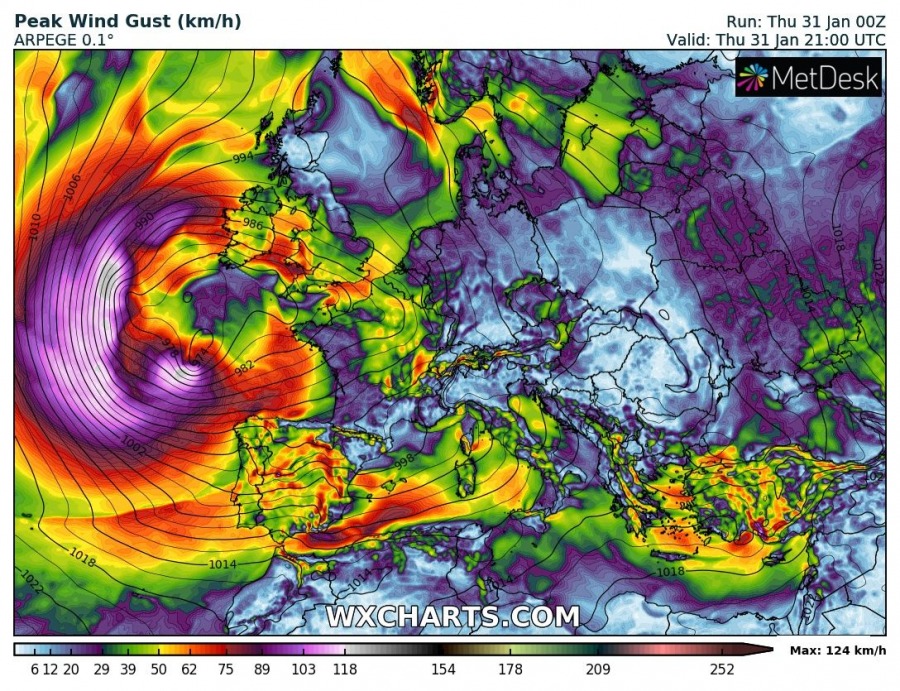 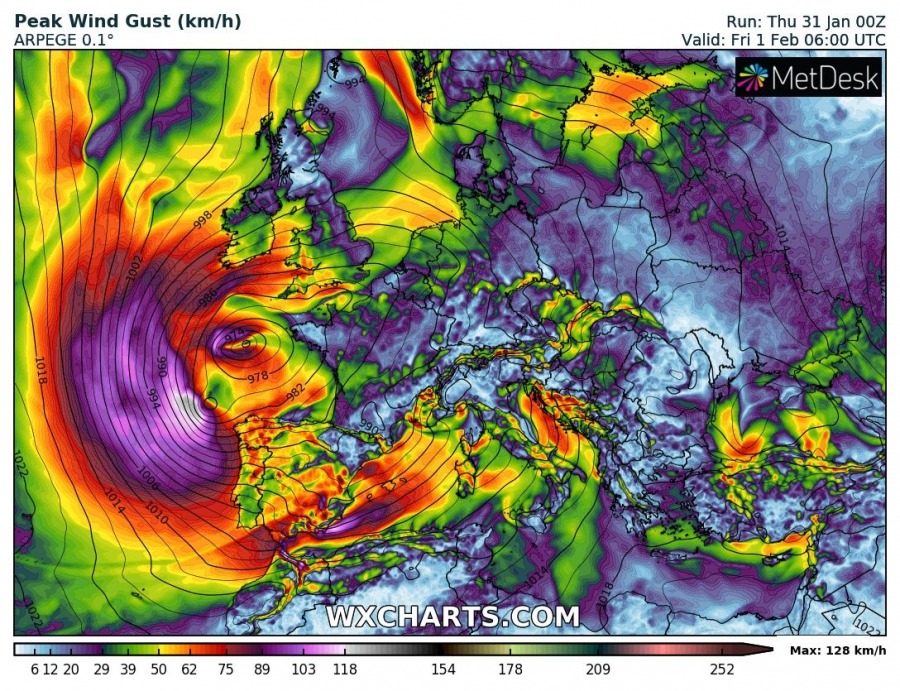 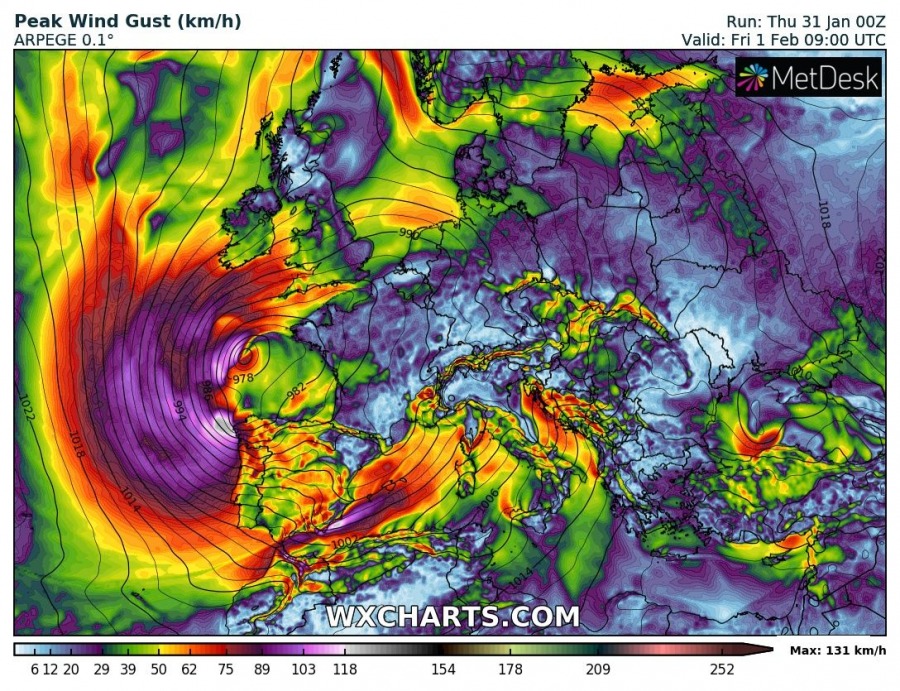 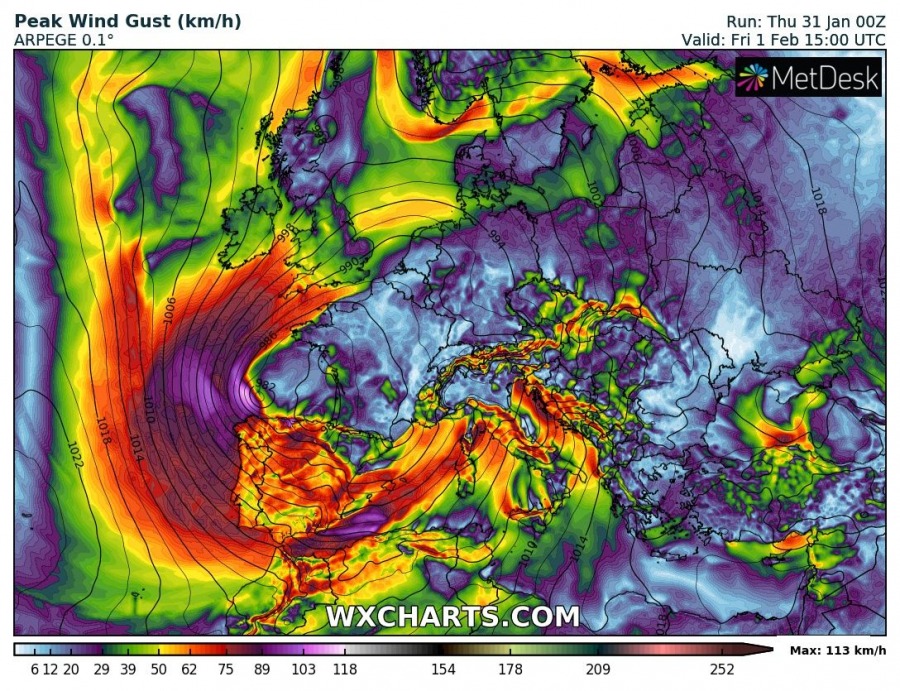 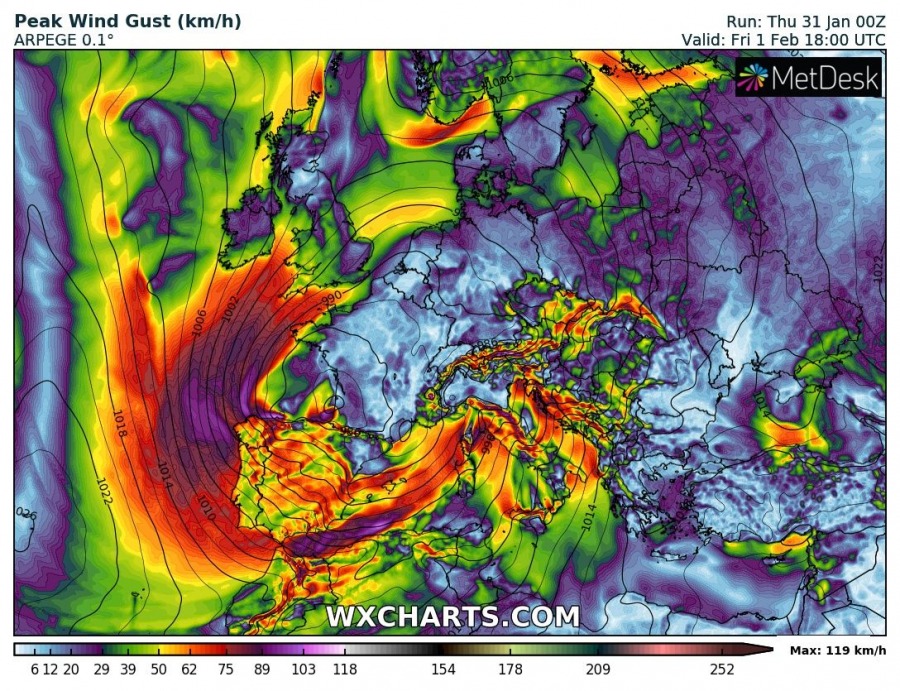 Peak wind gusts are expected to reach 120-140 km/h is some areas, especially along the coast of NNW Spain where some gusts associated with the storm cells could exceed 150 km/h. Indeed, even higher gusts are likely to be expected across the higher elevations of Spain (see the ICON-EU model map). 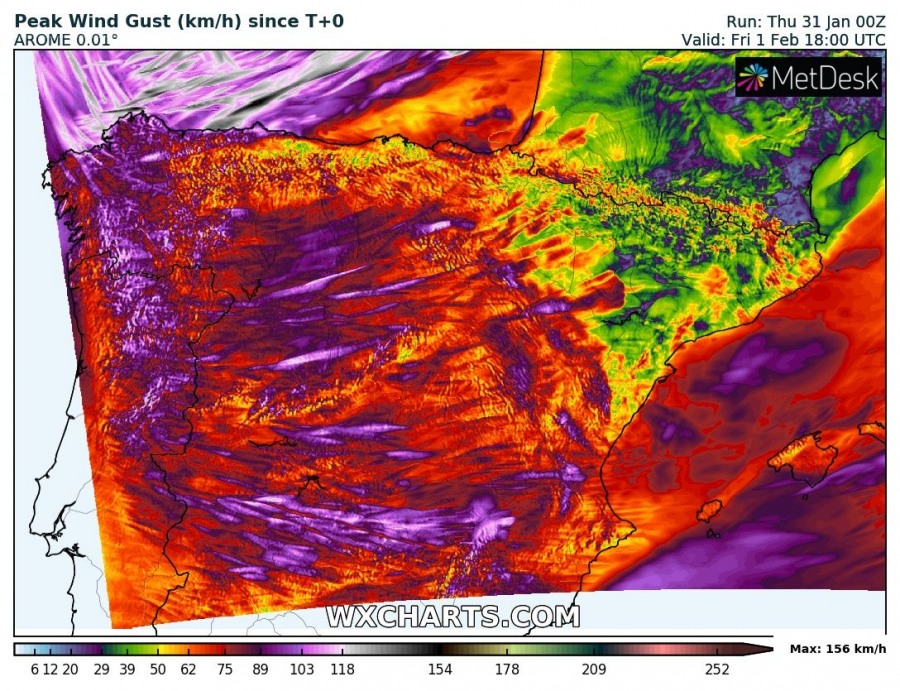 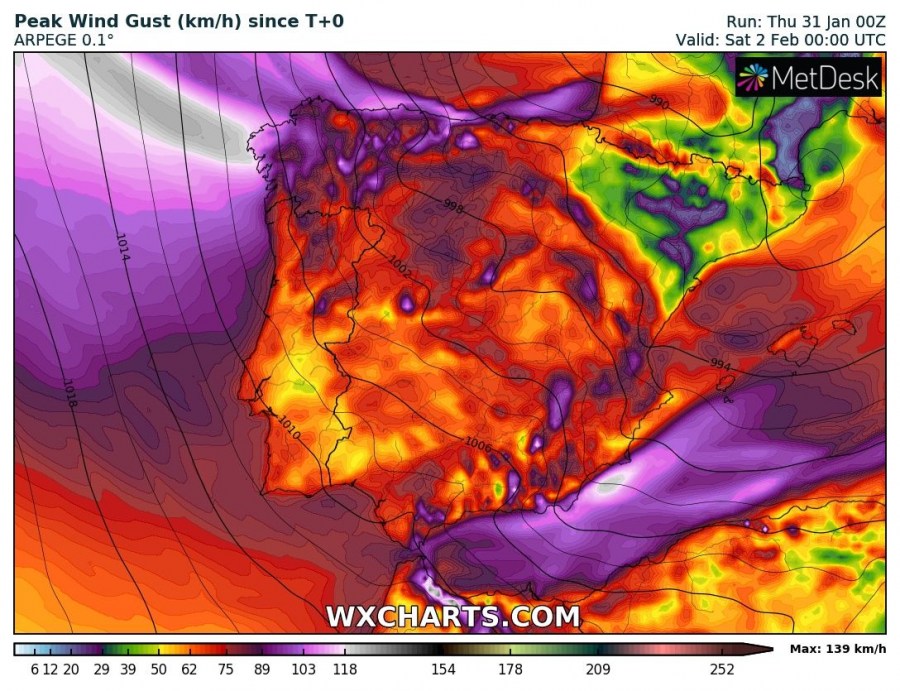 The system itself has ejected from the eastern Canada wave south of Greenland, forming a deep cyclone with around 970-975 mbar central pressure. It is tracking from Greenland towards the Bay of Biscay, associated with a very long stretch of high winds on its way. This will result in very high waves as system drifts southeast along its own generated waves so they keep getting amplified as cyclone approaches Iberia. Significant waves, locally in excess of 10 m, are expected along the NW Spain and WNW Portugal. 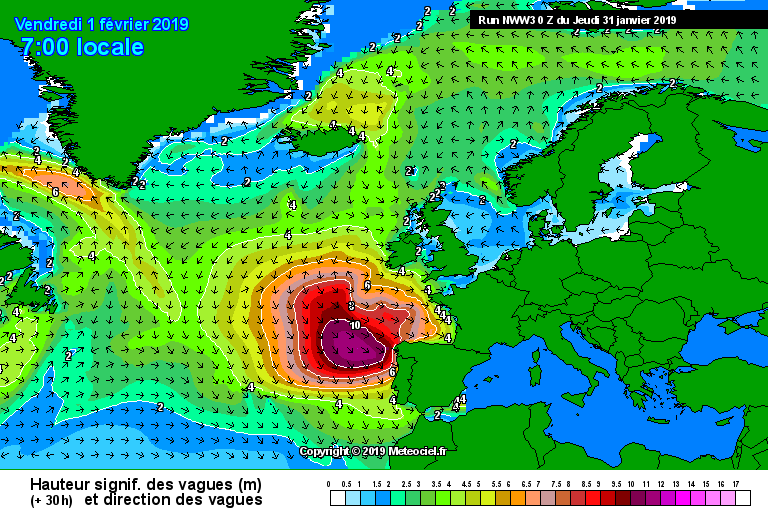 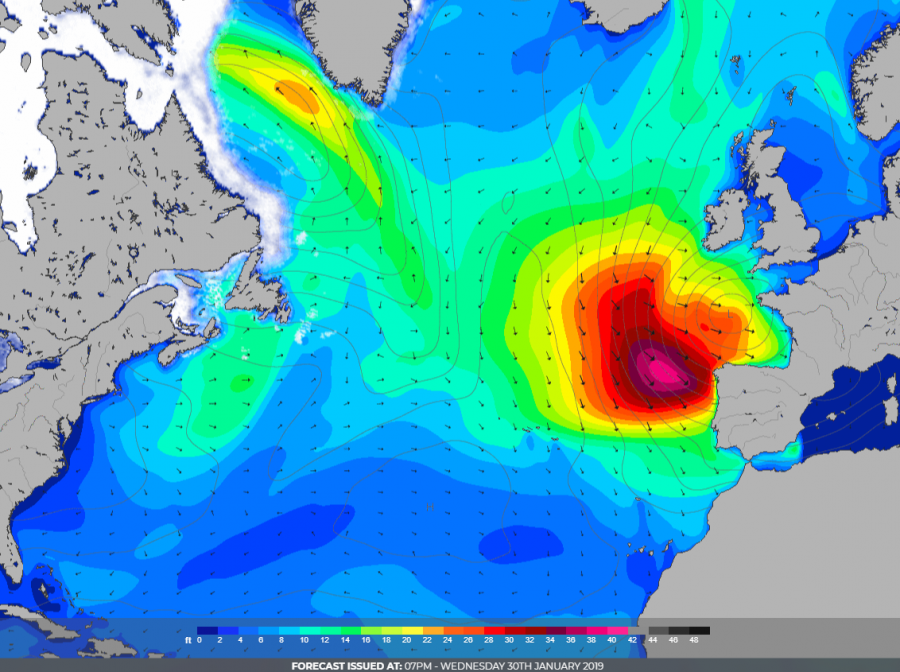 Strong and moist westerlies will also continue advection airmass into the higher terrain of NW Iberia, therefore resulting in more orographic precipitation in the next 48 hours. Excessive amounts with locally 100-150 mm of rainfall are expected across the north Portugal and NW Spain. And indeed lots of snow in the mountains. 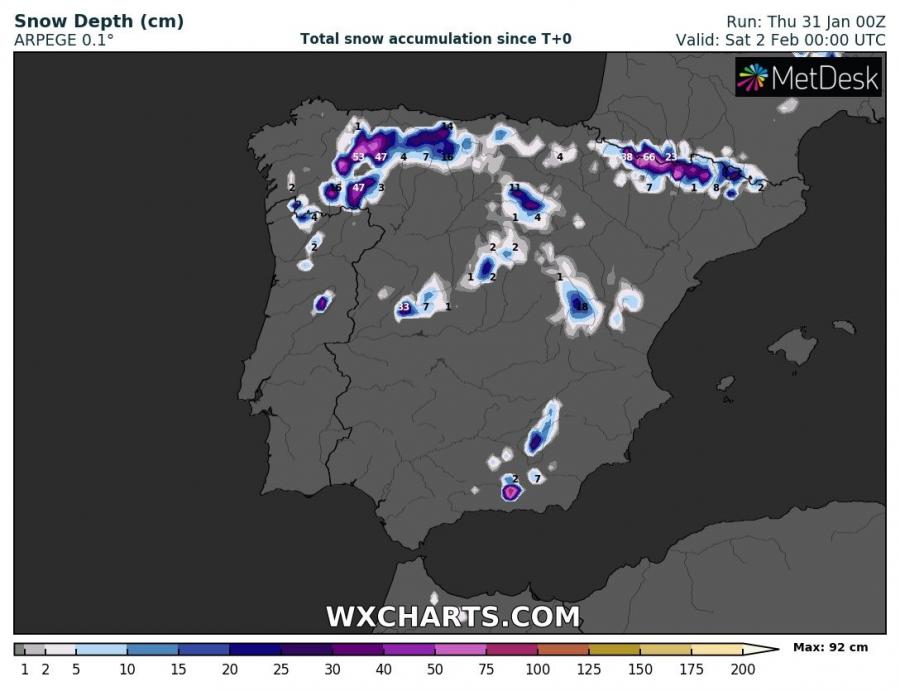 Stay alert for this dangerous cyclone and high waves along the coasts in WNW Portugal and NW Spain. We are closely monitoring this system evolution, so stay tuned for more updates.