ECMWF is the European Center for Medium-range Weather Forecast, in Reading, United Kingdom. It has the best modelling system (on average currently) for medium range weather forecasting (1-10 days).

The 500mb geopotential height forecasts is not really optimistic if you are a fan of winter from Europe or central/eastern parts of USA. We see a deep low in the North Atlantic, surrounded by the “highs” from east USA across the Atlantic into Europe. This is probably the most classical positive NAO pattern that you can see on the long range forecasts. This is a typical pattern for windy and wet weather across the UK and Scandinavia, and mild conditions across central/southern Europe. In the USA, we have warmer and drier conditions in the far east, and mild and more wet in central/southern parts. But ridging in the East, can promote near average or colder conditions across the western parts of USA. We do see a hint at a trough development in the west. 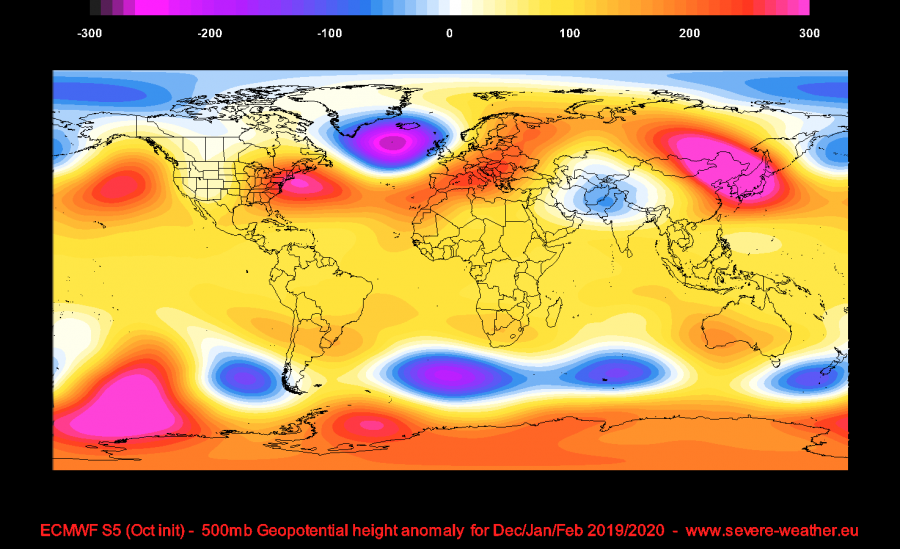 Staying at altitude, we have the 850mb temperature forecast, which is on average around 1.500 m altitude in the mid-latitudes. Here, we can see what we expected from the 500mb height forecast. Warm conditions across Europe and east USA, with a hint of colder levels in the west. 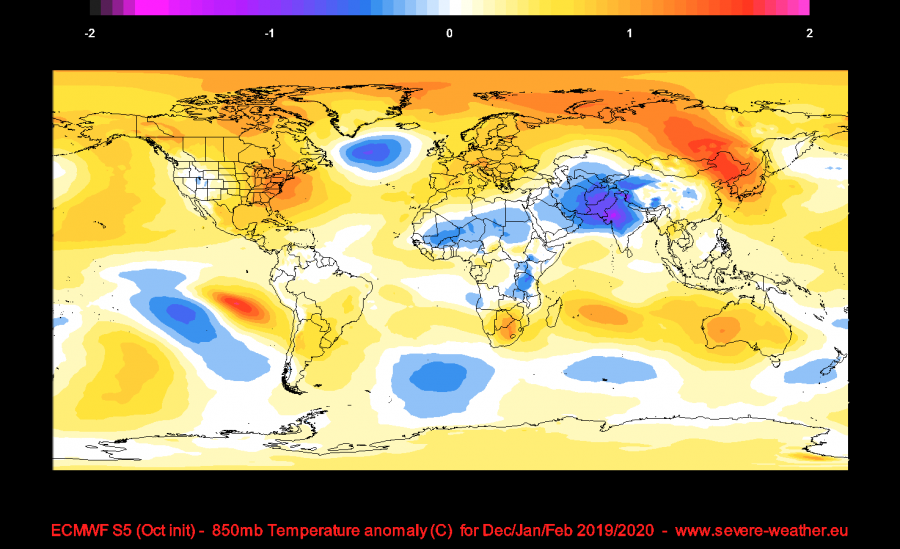 Going down to the surface, we start with pressure again. This shows the pressure anomalies at the surface, which are more influential for surface wind conditions and temperature transports. Here we see the entire North Pole is under low pressure (positive AO – Arctic Oscillation), which means the coldest air is locked inside the Arctic circle, and is harder for it to move towards south into Europe for example. That is a typical sign of a strong polar vortex. Speaking of Europe, we see the a broad low pressure area in the North Atlantic, and the west air flow across the UK and Scandinavia, just as expected from the general circulation forecast above. This means stormy weather for UK and Scandinavia, with less chance for easterly conditions and so less chances for colder weather in UK.
In the USA, we can see a low pressure extension in the Midwest, which drives the warmer westerly/southerly flow on its south and east side. But at the same time it promotes more northerly (and potentially colder) flow across the western parts. 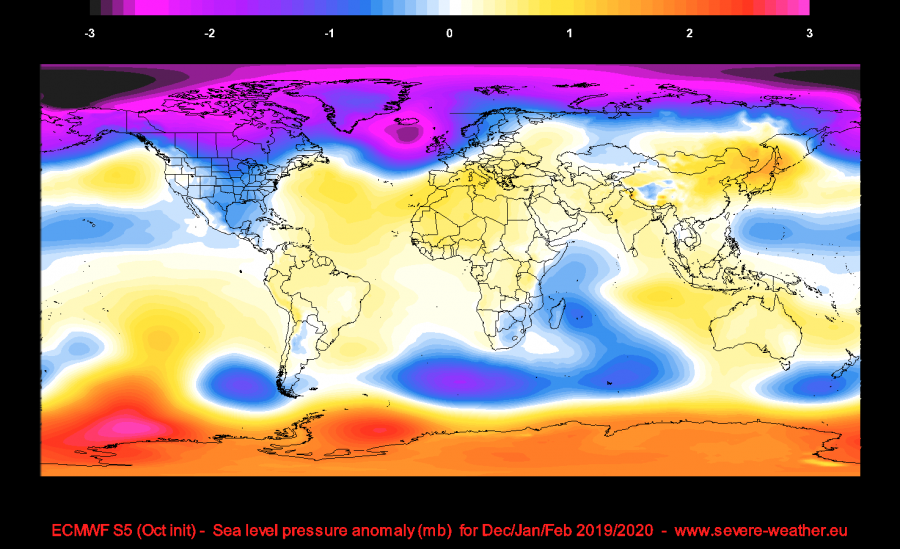 One of the most used long range parameters is of course the 2-meter temperature anomaly forecast, also simply referred to as the surface temperature forecast. It is the main forecast to tell us what to expect in terms of temperatures (warmer/colder). As we have interpreted already from the charts above, there are no surprises here. Warmer than average across Europe and east USA, with hints of possible colder air in the western parts of the USA. We can see that large part of the polar circle in above average temperatures, which is perhaps a bit questionable to this extent, but not impossible with the low pressure across the entire region and west flow on its outer perimeter. 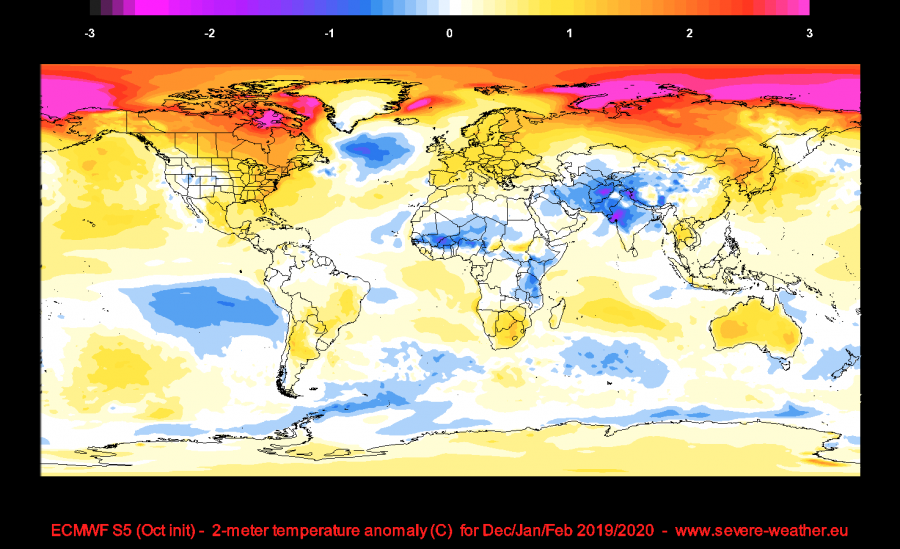 As a bonus, we have the snow depth forecast. The focus is not on the actual numbers it shows, but just on the likelihood of above below normal/above normal snowfall.
After the “terrible” winter forecasts above, who can even expect to see snow? Well, we do have parts of Scandinavia above average, which is pretty much under stormier conditions from the positive NAO, but is north enough to have colder air by default, while the rest of Europe has below average snowfall, as one would expect from the pressure patterns and warmer temperatures.
USA is another story. Here we actually have hints of above average snowfall in the west and parts of Midwest, associated with the lower pressure forecast we have seen above. 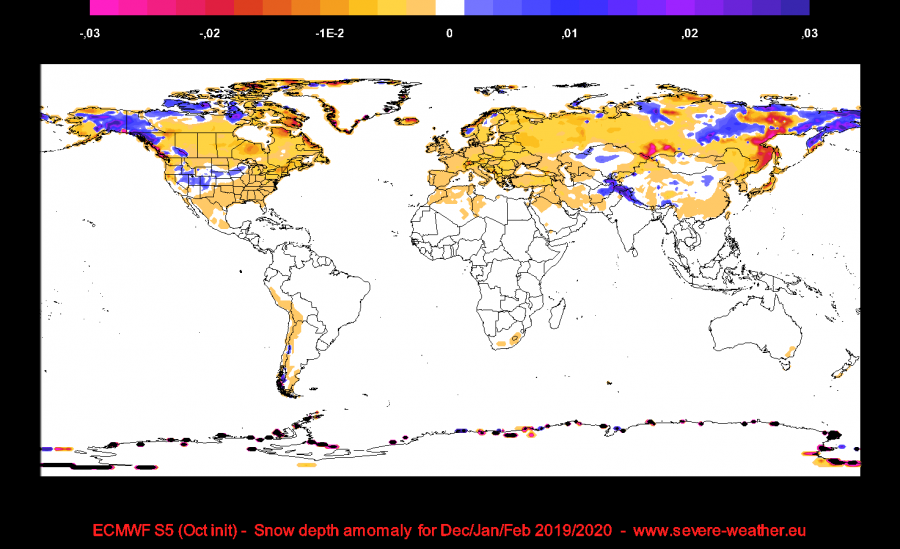 To summarize, the ECMWF forecast from October shows a typical positive NAO/AO pattern, with milder winter in Europe and east USA, while some winter conditions are expected across western USA and the Midwest.